Wiper issues - only shut off when motor is unplugged (1 Viewer)

I have been battling an issue with my wipers for the last week that just started during a normal drive on the street. They came on suddenly at full speed and would not shut off, even with the vehicle shut down and the keys out. The switch stalk does not have any effect on the wipers. I have unplugged the motor for the time being.

Now there are similar threads out there but as I have been digging into this there are questions I haven't been able to answer. What I have found are cases where wipers won't shut off while the engine is running, they stop when the engine is shut off. I am also unable to locate a wiper relay behind the dash, I have read in some vehicles the relay is in the switch stock itself. Otherwise, I am seeing symptoms that have not been described my others.

A side note that might be relevant - I recently installed a redarc sbi12 and to test the jump start feature I drained the main battery and tried to jump start it using the override switch. When I turned the key to run I got a tiny crank (not enough to start it), a click from behind the dash, the voltage dropped to the dead battery reading (i.e. the batteries were no longer joined), and the jump start switch no longer worked. The wiper issue started the same day, but I had been driving for maybe 20 miles before it started. I have been in contact with redarc, they have seen my installation and found no problems with it. None of the fuses in that system blew so they think the sbi might be faulty or some factory electronics might be faulty.

What I have done so far in order

1. Open the wiper motor to clean contacts thoroughly and re-grease. - this seemed to fix it for a couple of hours but then the wipers must have come on again while I was sleeping because the next day they were at the top of the windshield and the battery was drained.
2. Moved the aux battery over to the main and disconnected all the dual battery charging stuff. Then Installed a new wiper switch stock and cleaned/re-greased the motor again. - no change
3. Checked behind the passenger and driver kick panels for the wiper relay. - no wiper relay to be found.
4. Took apart the dash to look for the relay. - again, no wiper relay to be found..

Some notes -
There are/were no blown fuses or other electrical issues when the problem started or since. It operates like normal except for the wipers.

The redarc system is completely disconnected and it's back in the normal configuration.

With the keys out of the ignition and wiper motor unplugged - if I move the switch stalk to fast or "mist" the battery light comes on and the factory volt meter shows the normal reading of just over 12 volts. I hear a click from behind the dash near the steering wheel cover.

With the keys out of the ignition and the wiper motor plugged in (regardless of switch stalk position) - it runs on full speed, the battery light/voltage flick on and off on each stroke and there is a click coming from behind the dash near the steering wheel cover (same as when you turn the key to on). You can also hear the fuel cut solenoid flicking on and off at the same time.

Is it possible for the wiper system to work if it's wired up without a relay or is the relay in-fact in the switch stalk itself? I have never had issues with it for the years I have owned it. I assume the relay is there somewhere but it must have been moved.
Does this sounds like symptoms of a bad wiper system component - motor, relay, switch stalk?
Is there some link between ignition and the wipers? Or, does the jump start situation I described seem relevant, even though the wiper issue didn't start immediately after that? I'm leaning toward this being a wiper motor problem since fiddling with that was the only thing that made a difference.

This is my 12V wiper relay, 1985 HJ75 12V. Sounds like a short somewhere. For starters check the fuseable link. I don’t know where your relay would be but if you check the parts manual it will give you a general location 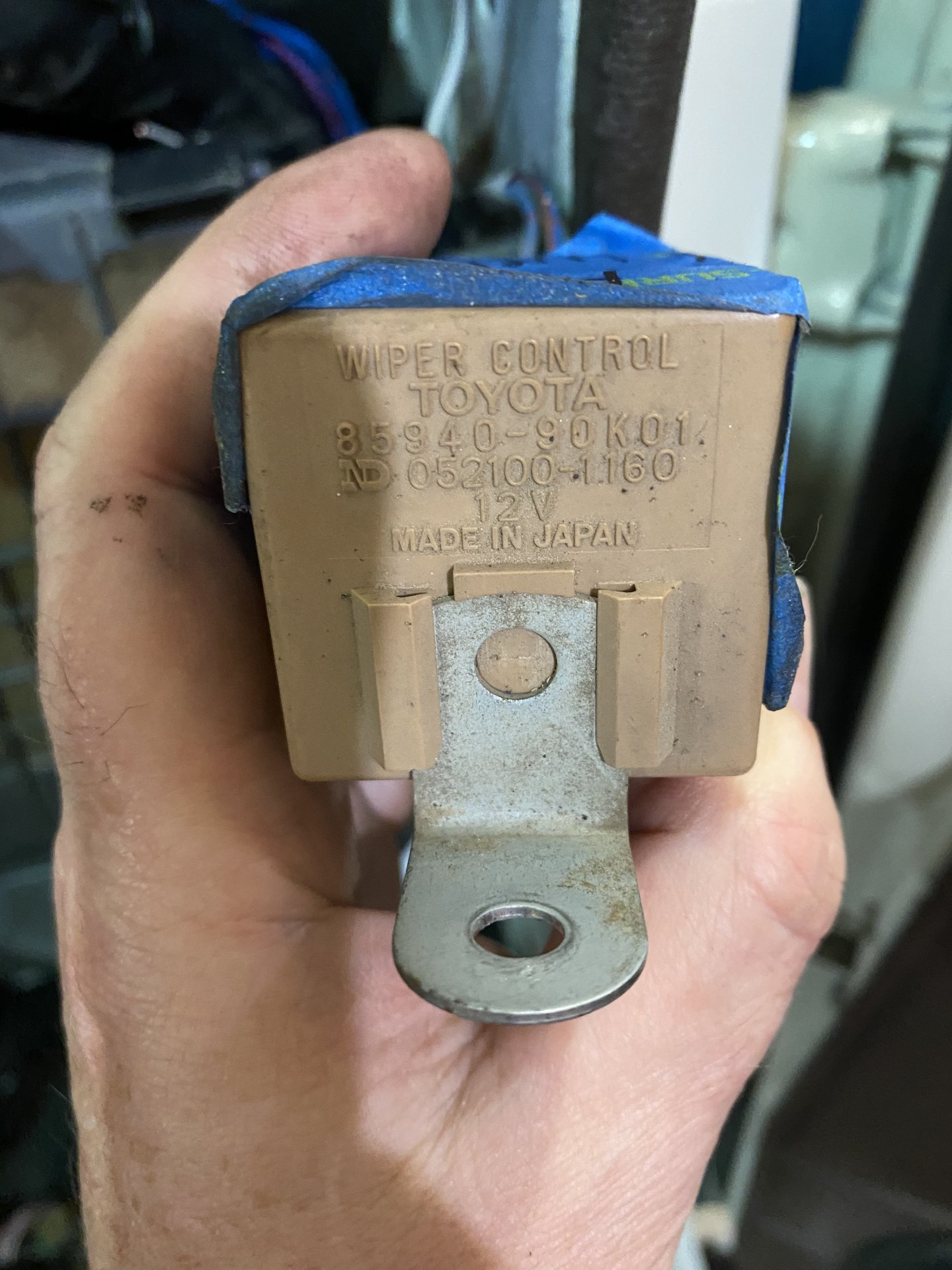 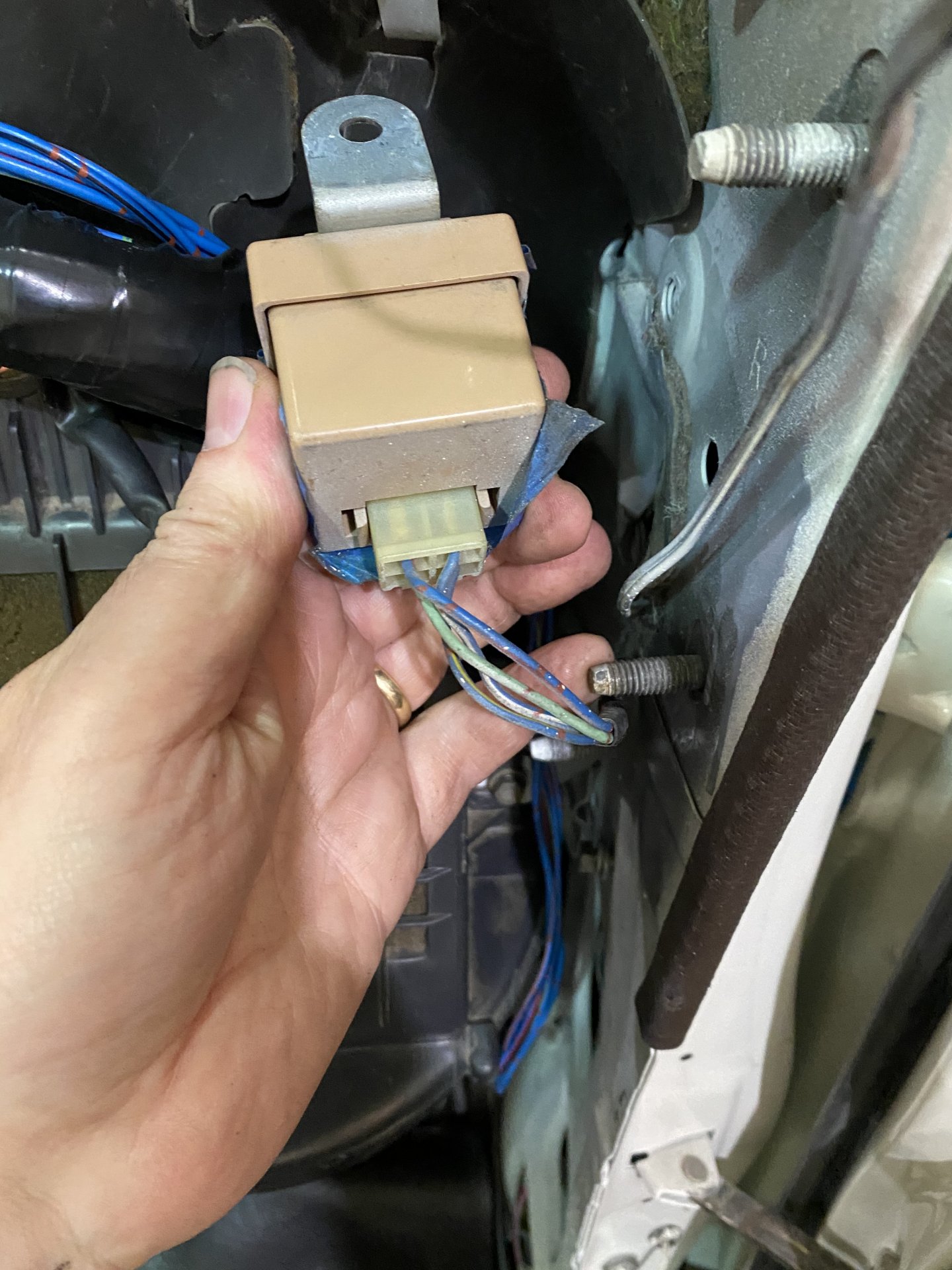 Manual shows the relay either behind one of the kick panels or on the side behind the dash, the diagram I have only shows a rhd so I checked both kick panels, around the instrument cluster, and around the glove box with everything removed. Wondering if someone did something shoddy at one point and wired it up without a relay and the splice job is shorting out. I have no idea if it would work like that, clueless about electronics. Thanks though, think I'm going to have to do a lot of digging.

Bummer. I don’t know much Electric either

Honestly it makes me want to throw up

Normally, your wipers do not have power available unless the key is on.

As the wipers run without the key being on or even in the vehicle, there must be a short. They are getting power from one of the batteries.

I would double check the redarc install to see if you accidentally clipped or broke a wire that is now providing power to the wipers.

Can any other "accessories" be turned on without the key? A short in the ignition switch?

Thanks, only the headlights and signals can be turned on without the key, but that should be normal. Everything else seems to be functioning. I routed the override switch wiring near the ignition wires, so I'll check for a short there. Then I'm going to chase the wiring back starting at the wiper motor to see if I can find anything. For clarity, how should the wiper circuit be setup with the switch, relay and motor? I am almost certain now the relay is missing after looking again last night.

Okay, so I found what I think is being used as the wiper relay, pictures below. It is zip tied around the steering column, almost invisible. There are wires soldered to the terminals and covered in electrical tape, but according to google it's just a generic automotive relay. I can also feel it click when I move the switch stalk, turn the key to on, or plug in the wiper motor. All of the other relays and switches from the parts diagrams, in the cab and under the hood seem to be accounted for. This must be the problem child somewhere somehow. At least I think I have pinpointed the three main components in the electrical system and can diagnose properly.

Anyone seen one of these before? 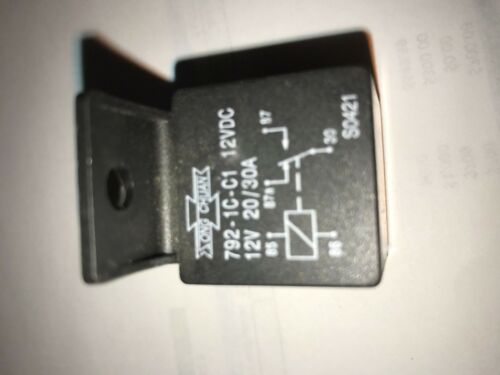 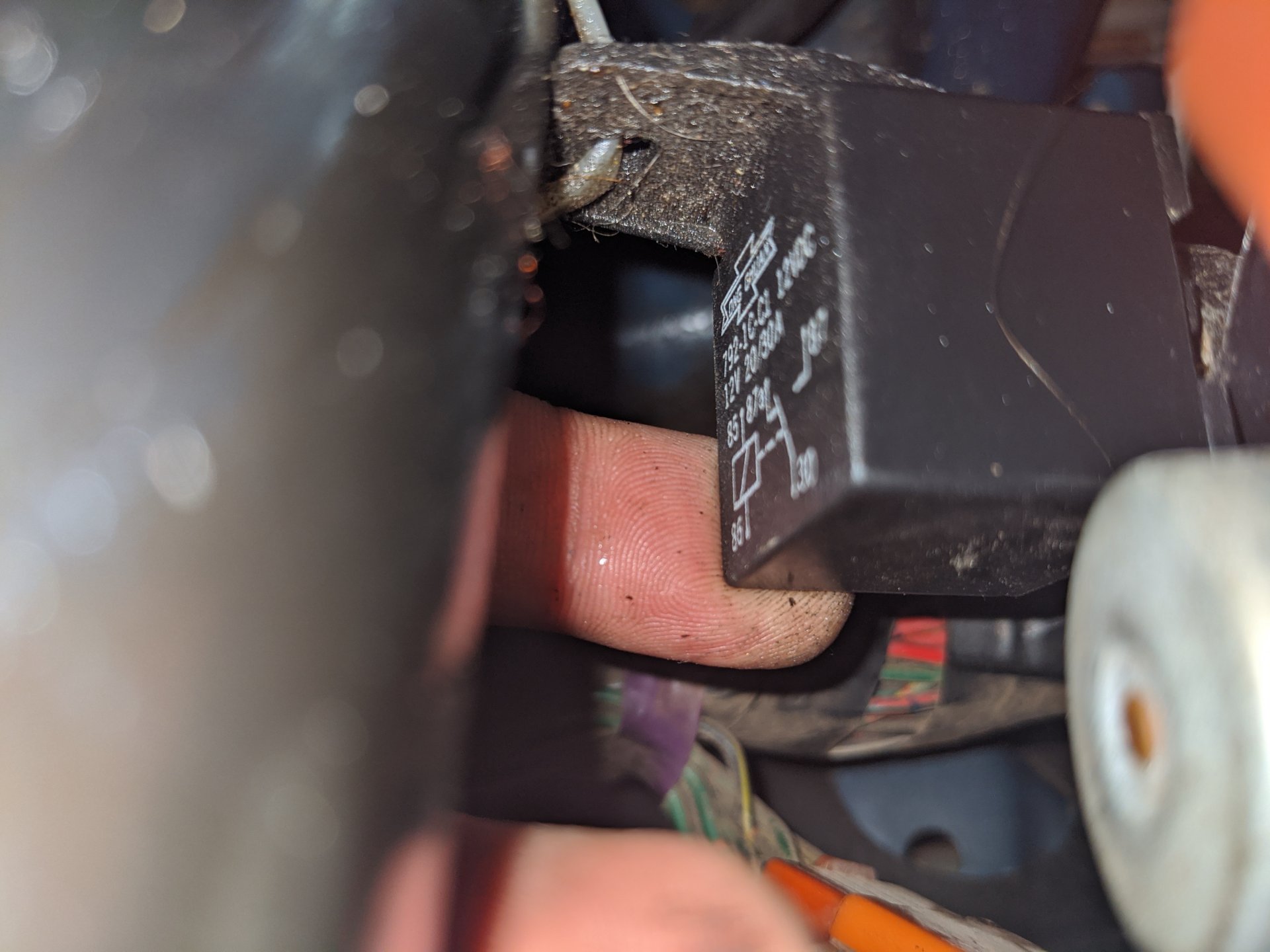 Little update here, wiper issue was fixable with a new identical relay. However, I decided I'm going to pull the harness and pay a professional auto electrician I know to fix it properly while trying to source oem replacement components as needed. I would like to eliminate any unnecessary splices, complete deletions of factory connectors, aftermarket relays, and incorrect insulation colors. I'll be involved a bit so I can at least learn something and get familiar with what's going back in the truck. Massive project now, but I found a lot of other questionable sections of the harness when I was digging around. I don't trust my skills, in this department, to do it all on my own and feel confident traveling later on. Going to be a while and some $$ now

. I just can't live with the harness in this condition.

So, I'm not really sure where to buy Toyota cabling by insulation color and thickness, I'm going to talk to Dave at Japan4x4 first. If anyone has a good and timely source for this domestically please advise. As of now, either Dave can help or it's pulling harnesses at the junkyard for me.

Wanted to post this for documentation sake. The relay was not causing this problem, it started happening again shortly after and was intermittent but mostly faulty so the motor had to remain unplugged. Things fell through with the electrician so I went through and made repairs to the harness myself without removing it from the truck. Everything is fixed up nicely and the actual cause was a pinched wire between the fender and aux battery tray I had recently mounted. If I pressed this exposed wire against the fender the wipers would instantly come on and ignition circuit would power. Repaired this wire and used some steel spacers to mount the tray a little farther out so its not so close to the rh side harness. Lots of hours on this and the problem was actually solved with 10 minutes of work. Frustrating but happy everything else is cleaned up and I didn't pay someone for the work. Really not so scary after studying diagrams and getting the right materials.

For future reference only, my LHD 1994 FZJ75 wiper relay is mounted on the side wall above the left kick panel. It's mounted with the connector at the bottom. I had an intermittent issue with mine which I hope was due to the relay connection so I had to reach under there and wiggle it occasionally until I could pull it apart and clean the connection.
Last edited: Sep 5, 2020
You must log in or register to reply here.