The Journey Begins...Isuzu into a 60

I have taken the leap and started down the road to Diesel Land...Again! 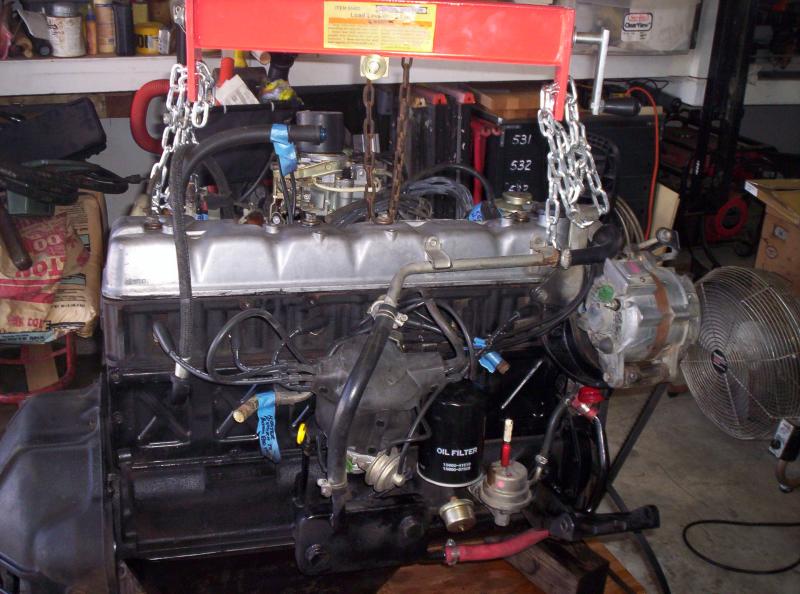 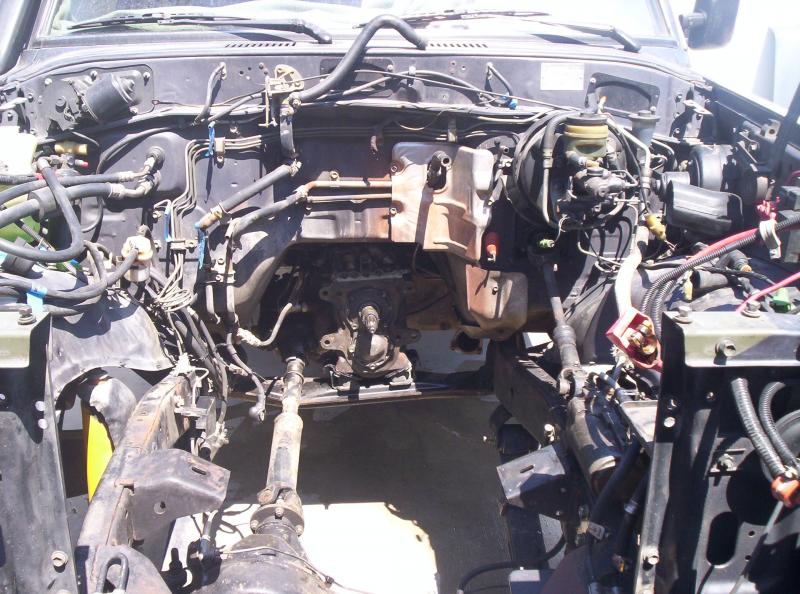 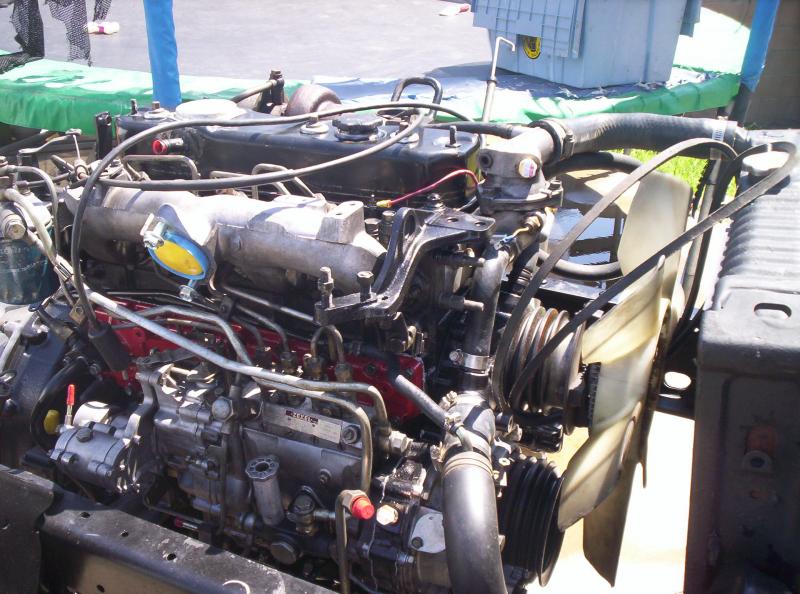 Looks good. Subscribed. I see a 2F for sale in your future ?
=TOYOTA=​

The 2f is already sold, on a pallet and being shipped this week.

That was fast. Cool.

Don't know anything about the engine you're installing ... Is it a Hino build or Cummins ? Or ?

I'm using the H55 already there with the stock 3:70 gears. This combo puts the engine in the "Sweet Spot" on the road.

I'm planning on having on road in two weeks, if things go fairly close to plan.

I can't wait to see the finished product and driving impressions. Are you leaving the engine stock in terms of turbo and boost? Also I'm assuming you're using the Isuzu swaps adapter and then a Chevy to Toyota adapter behind that?

Yes to all of the above.

Stock for now on the engine. Appears you can do a lot with this engine.

I found a Downey bell housing and related parts on Mud.

Motor mounts is the current stage. Hoping by mid week to have them ready.

I'm test fitting the engine in frame with out clutch components installed. I made 2 guide studs out of cut off bolts that screw into bell housing to guide it into the trans. Studs guide it in place, then 2 quick bolts and its all aligned for fitting. Not my idea on the studs...found on Mud, but a good one.
Plus if you cut slots on the ends of the studs, you can use them on the final install. Just remove them with a screwdriver and replace with the bolts.

i have one of those engines in my elf 2 ton and love it, subscribed.
we are all given sh*t in life,
but some of us learn to turn it into fertilizer and grow from it,
and some us try to fling it on others like monkeys. ​

Nice...looks like this is going to be a great read. Best of luck.

I picked up some steel today, 3 X 6 X 3/16 tube. This size material should allow enough purchase to make a solid weld. I will make some angle stiffeners also.

This mount material will allow me to use the stock Isuzu motor mounts. These mounts are designed for this engine and are readily available. Makes sense to me?

Pics later if progress is good...

Good Bye 2F...You have served us well! Live long in your new home in Colorado. 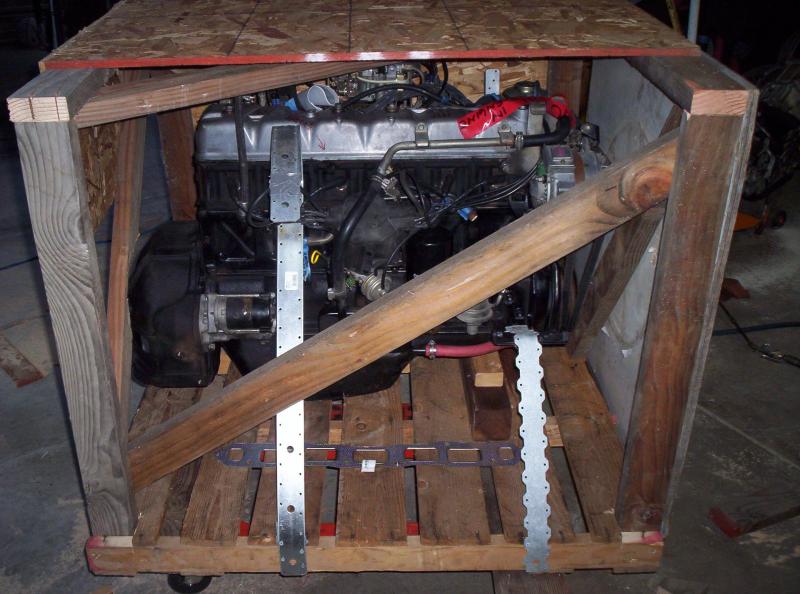 And goodridance
Good luck with the swap,what size(litres) is that motor,is it the one they put in some landrovers downunder?
HJ61,12ht,5speed,a bit of custom work,alot to do yet.
Used for prospecting,exploring.
Mazda 2012 BT50 diesel 4x4 dual cab,the other halfs.
FJ75 troopy.

The engine is 3.9l and is a version of what was in the Rovers downunder. I think it is a good choice for a 60.

Made some good progress today. Engine was mated to the trans and positioned in the frame! Things fit pretty darn well for the most part. The oil pan hump is a no go on the front diff, but the 4BD1 oil pan without the hump was delivered today along with the "Short" oil filter. With these two changes this part should work well.

The Isuzu A/C compressor was kind of chore. It mounts on a combo bracket with Alt on the drivers side down low next the steering box. Not enough room for both, had to do 2 mods. I put a temp 1/4" shim between the steering box and frame to move it out a little bit. I could not see a reason this would be problem...Does anybody else?

Second issues was the A/C / Alt mount. I measured how much I could mill off the mounts and changed two of the mounts points on the bracket. This gave me over 1.5" clearance to the steering box.

I also am going to re-clock the turbo outlet to clear the brake booster. Another concern I had. So much I already have a HydroBrake set-up on the bench ready to go if needed. But I think stock is going to work.

Now everything is aligned and ready to finish my motor mounts tomorrow night.

I have one question for everybody. I set the engine up to level side to side. Checked with a level on the valve cover and two other machined surfaces. I also angled the engine 5 degree's from front to back. This is what I think is correct. Any other idea's before I weld in the mounts?

My Isuzu manual also showed up today - 8 weeks to get this from Books4cars.com? 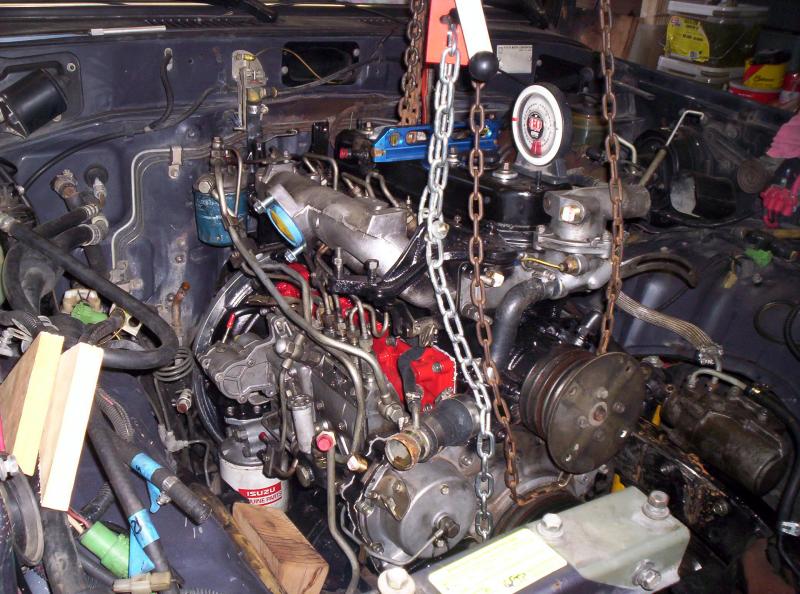 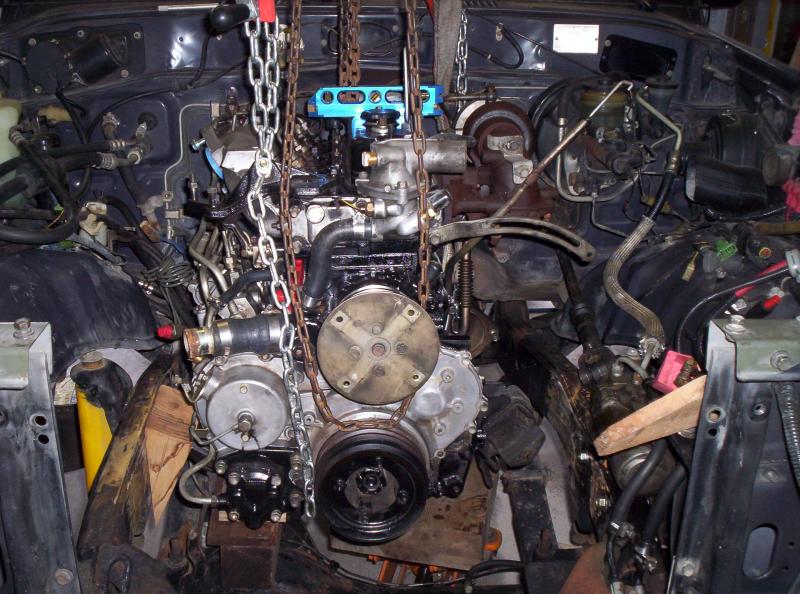 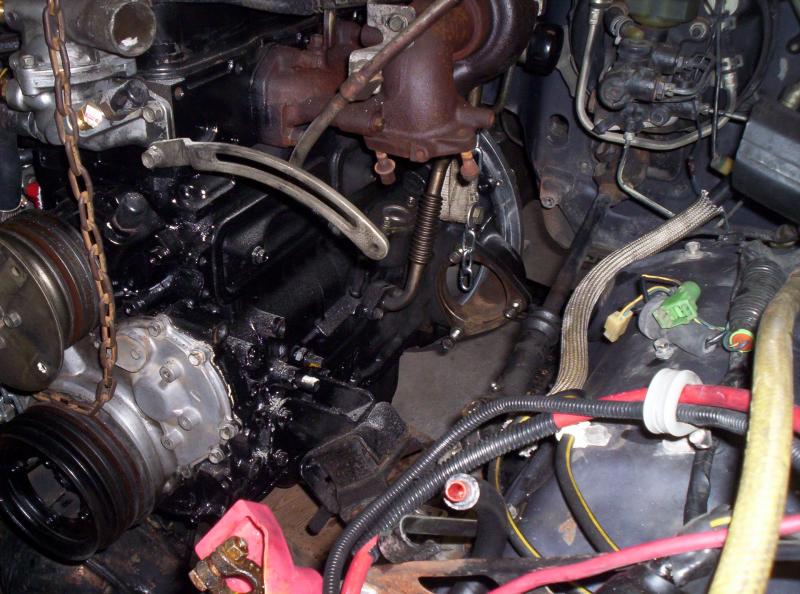 I put a temp 1/4" shim between the steering box and frame to move it out a little bit. I could not see a reason this would be problem...Does anybody else?
Click to expand...

FYI the Isuzu's alternator pulley is a bolt on for the 60's alternator.
The original alternator is almost a bolt in too.
That is if you decide to go that route. There are some advantages to using the Isuzu alternator though, like a vacuum pump.
82 FJ60 Trail Rig. topless, Caged, 4BD2T diesel, turbo & intercooler, H55, Toybox, SUA, 37's.
83 FJ60. Daily driver, 4BD2T, NV4500, WVO.
94 Toyota pickup, Tons, 40's

a shim would be fine for a temp test but i would recommend welding it to the frame if you are leaving it installed permenantly...
we are all given sh*t in life,
but some of us learn to turn it into fertilizer and grow from it,
and some us try to fling it on others like monkeys. ​

The shim was just to check clearance. I will make one from steel and welding it sounds like a good idea too!

I'm using the Isuzu alt for the vac pump, plus my Toyota alt went with the motor.

My biggest concern now is the engine angle front to rear. I set it at 5 degree's to the rear. On 4BTswaps/Isuzu forum, i asked the same question, and have not got a firm answer yet. But it did come up to check the tailshaft angles front and rear to make sure they are the same...Good point! I am wanting to weld mounts tonight. Any ideas or input is much appreciated.

Got to earn some money today, or the sponsor of my project will cut me off! Probably in more ways than one!

I'm pretty familiar with the NPR trucks around here.
Most of the small food vendors (soft drinks and such) use them as delivery/work vehicles.

What kind of highway speeds are you looking at (cruising speed/long distance) and average mileage?

Is the H Engine Sleeved?

Are the 1hz and 1hd rad hoses in 80 series Land Cruiser the same?