So, best brand of cordless power tools to get (re)started with today? (2 Viewers)

Consumerism at it's best!

Advantage of upping the voltage is now the conductors don't have to handle as much current and the insulation requirements really don't change since the dielectric is already so high just due to the nature of the material used. Makes the tool smaller and lighter if it doesn't have to have 4/0 copper busbars inside it.

yes, smaller size or more power, so it'd depend on the tool function. Some cordless tools can still benefit from mo' powa', while others may already come close to breaking your wrist.

We have used Makita 18v tools everyday in my shop for the last 13-14 years.....maybe longer. I have a huge collection of them.....in addition to the normal shop tools, I have their wood working stuff, chainsaw, leaf blowers(big and little), saws, routers.....hedge trimmers....I even have a Makita fan. Lol. We beat the ever loving snot out of our drills and we've gone thru 2(stripped chucks). I mean, we TRY to break them and they just don't break. I broke one flash light when I lowered a car on the lift on it. That's it.

I bought one of their smaller 12v sets for one tool we wanted....a small ratchet....it's perfect for what we needed it for(also using the 12v for a 90 degree angle drill). It's super light duty compared to the 18V stuff.

Every time I think I've got every Makita tool I could possibly want, I find a new one. It's staggering how many they have.

I have a number of dewalt tools that are approaching 12-13 years old. Being I'm not in any trade and work in an office for a living, using the tools around my house, etc., they're all good enough.
They use the older 18v batteries. For a short period, about 8-9 years ago, dewalt sold some of the 18V batteries with Lithium. My nicad batteries were fading so I bought these. They all still work, at least for small jobs. Lithium batteries last much longer than nicads ever did.
I've bought some of the new "20v" tools, they are "nominal 18v" and actually marketed as 18v in Europe (where I believe it's easier to get in trouble lying in marketing). They've been using 18v for over 13 years now and it's proven enough for most tools. Dewalt's apparent answer for tools that need more is become to use a second battery?
I bought the "60v" chainsaw and string trimmer, they work great, I guess, cause now that my wife uses them, before she just said she could start the engine and walked away. And I just bought the lawn mower. 2x 20V 10 ah batteries, probably making 40v, instead of 20 ah? While I have 2 acres of lawn most gets done with a riding mower but there are too many corners it doesn't get into. It works, and more importantly than how well it works is that there's minimal maintenance.

But every time I'm in the store browsing, I stop and wonder about the ryobi tools. While I would expect less from them, it's still going to be good enough for what I do. If they did fail it'd be easier to just buy a new one. And they're a lot cheaper, would have a few more things like the inflation or vacuum, spotlight, etc. At ryobi prices I could justify that brad nailer and trim router that I'd only use once every two years, but really just don't want more batteries. 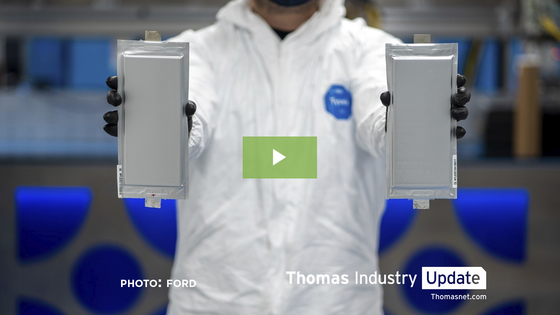 The new batteries could provide longer ranges at a lower cost with a safer design than lithium-ion batteries.

well, I'm thinking about starting out on a new platform (Makita) because of a specific chainsaw I would like to buy. I did a fair bit of research on ebay and saw some weird things there. Lots of open boxes deals. Interestingly, when I check the prices of individual parts like tools, batteries, chargers etc on ebay, even striving for lowest cost, I found that it is quite hard to beat the price of a full sealed new kit from a dealer. I can sort of do it, but not save much, and you got to be fast and jump on deals. Lots of shenanigans and more potential risk for little benefit if any. Seems like a lot of those open box deals are by folks who buy kits (on sale presumably), break them up, and sell bits individually for an overall profit. IOW, as stated here before, the best way to get into a new platform seems to be with a kit. In fact, I saw some bizarre things where you can buy a kit with a nice tool, batteries and charger, for less than it costs to buy the charger and batteries alone separately -not including the tool at all. Weird. But eh, I'll take it...

I've seen similar in Milwaukee cordless tools, although not from an exhaustive study. Can't buy the components of the kit for anything close to the price of the kit and the kits always seem to be on sale somewhere. One thing that I did notice was the kit batteries tended to be lower to the lowest A-hr batteries made. Saw this aspect in DeWalts too.

With Makita it seems like there is sometimes a choice as to what size batteries you want in the kit, but yes they do have some kits with 1.5Ah batteries so if you're not paying attention it's easy to get one of those by accident for the low price when you were expecting bigger.

I guess the first kit is a relatively easy decision if you get into a new platform, maybe the second one too so you now have 2 or 3 tools and maybe 4 batteries and 2 chargers. After that the batteries and chargers may become superfluous and you want to start to buy bare tools.

I'm hoping for one of those 2 batteries kit where you get another 2 free for a total of 4 x 5Ah. Now we're talking.... Unfortunately, those are usually for the more obscure tools, it seems. I guess they do know how to play the game better than us...
F

My last Makita Kit I got from acmetools.com when they had a sale on.
F

The new batteries could provide longer ranges at a lower cost with a safer design than lithium-ion batteries.


That is your tax dollars .. via a gov grant.

It;s still a drop in the bucket.

Energy density in small batteries is worth pursuing, but I don't think that it is worth pursuing in EV sized batteries. If you compare the energy density of our best current commercial battery to the same volume of gasoline or diesel you'll see just how pitiful they are. Better would be to work harder on fuel cells for moving people and goods around as the vast and reasonably efficient infrastructure to support them is already in place. Not so with batteries, and no battery recharges in the same time as filling a fuel tank. SuperCaps, maybe, but those things are extremely dangerous.

The one thing to be careful now is that some of the Makita cordless tools are hard to get. I'm not sure if it's the batteries, or the guts of the tool, shipping, whatever it is. I've had a Makita cordless track saw kit on order for over a month from Rockler, and they keep pushing the shipping date later by 2 weeks. No idea when it will show up now. No other vendor has them in stock.

I heard a local ugly rumor that King is way, way, way B/O'd. Something like a year...... Hope that's not true.

ntsqd said:
I heard a local ugly rumor that King is way, way, way B/O'd. Something like a year...... Hope that's not true.
Click to expand...

That's what I was told when I looked into them a few weeks ago. A year out. And no idea on the National Luna fridge, maybe November.

Anybody knows whether lithium ion batteries are more susceptible to dying because of sheer age since manufacturing or because of number of recharges?

Number of recharges, predominantly. They don't degrade with age as badly as NiCad.

I've always wondered if leaving then out in the cold was bad for them. I never do now, just to be on the safe side, they are too pricey to gamble on. They all get stored inside during the winter now. I've read articles on both sides, so not sure what to believe.

I googled a bit and I see of lot of mention of about 500 discharges as typical life expectancies for 18650 lithium cobalt cells. Some mention 1000+. Of course, that will depend a lot on your criteria, depth of discharge etc. For a DIYer, that is likely years and years, though, which matches my personal experience. But maybe for a pro on the job who charges his tool daily it would be much less. Anybody here can tell us what you observed on the job site as far as practical life expectancy?

KLF said:
I've always wondered if leaving then out in the cold was bad for them. I never do now, just to be on the safe side, they are too pricey to gamble on. They all get stored inside during the winter now. I've read articles on both sides, so not sure what to believe.
Click to expand...

With Nicad, lead acid, etc, I know USING them cold (below freezing) was always an issue, especially really cold. But I never really considered the impacts storing them cold, other than some old rumors about alkaline batteries storing longer in the freezer (and lead acid batteries total going to s*** stored too long below freezing).

But I left Alaska 25 years ago... Haven't heard of people doing some of the crazy things we'd do surveying (electonics with nicad batteries) with their phones, or any complaints about Teslas just not running at 20 below... So maybe this isn't as big an issue with lithium (like all chemistry, I'm sure there's a limit to hold cold the battery will work, but is it cold enough to not be relevant?).

There's a fair bit of tech in the new Lithium batteries, I wonder if a Milwaukee tech center can tell me the number cycles n a given battery. I have had first hand experience of long term dead(shelf) storage killing both a 1st gen m12 lithium, and having a couple of M18 XC4.0 that were bought "new" last less than a year.
I've been watching the sales too, definitely get a kit when they are on sale, then just watch for good deals on the tool/battery/charger unless you need a tool on a given day.
One of our local suppliers, had the previous gen M18 brushless 4-6" grinder bare tool for $160 with a free XC5.0 battery.
You must log in or register to reply here.

Second-hand tools: what best site to find them locally now and why? CL, FBM, ?

what is the best type of framing nailer?
2

Best way to plug a hole in a tool or storage box so it's water/weather proof and looks and works out OK?

Don't be too nice when going for free tools on Craigslist...