i figured i should do a thread like this, as i enjoy when other people make these kind of threads. i guess you can think of it as a mini-build up plus real testing

here is some before pictures. its a 1999 land cruiser, gray on gray, with rear and center lockers. got that brush gaurd for my birthday in september and i mounted the lights, which are hooked up to the foglights and come on with the same switch (hit up the FAQ for that). i mounted the CB in the center console which so far is great, but i screwed up soldering the connector on the wire so its not finished yet. does anyone know where to get the brush gaurd/bull bar CB radio mounts? 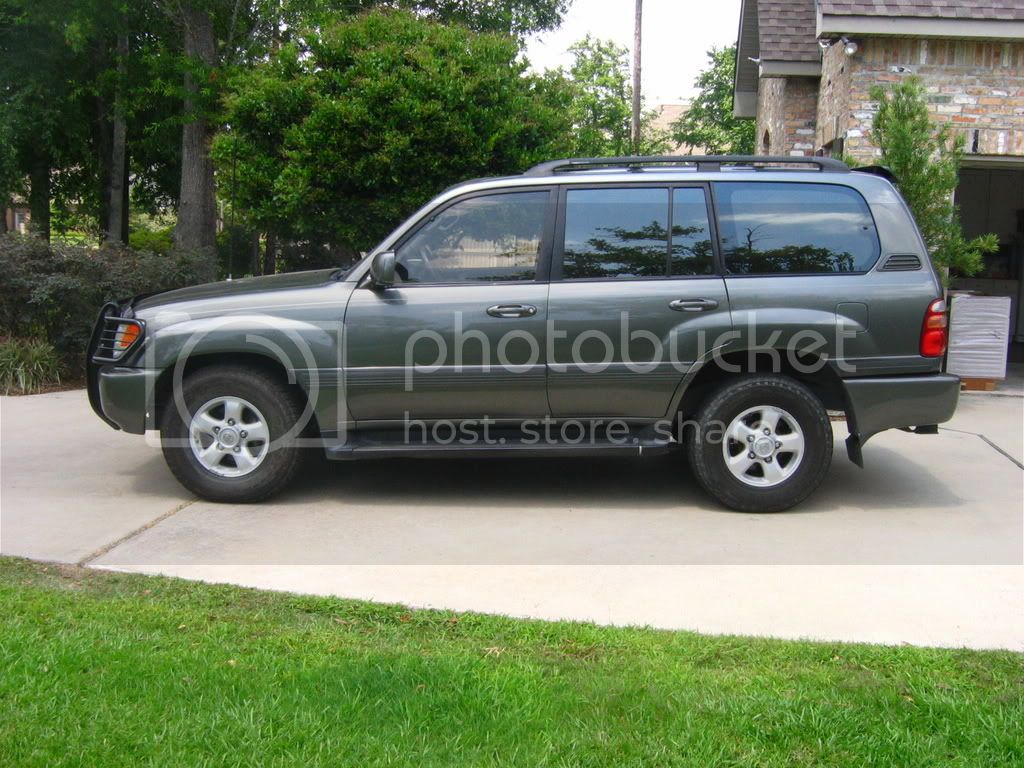 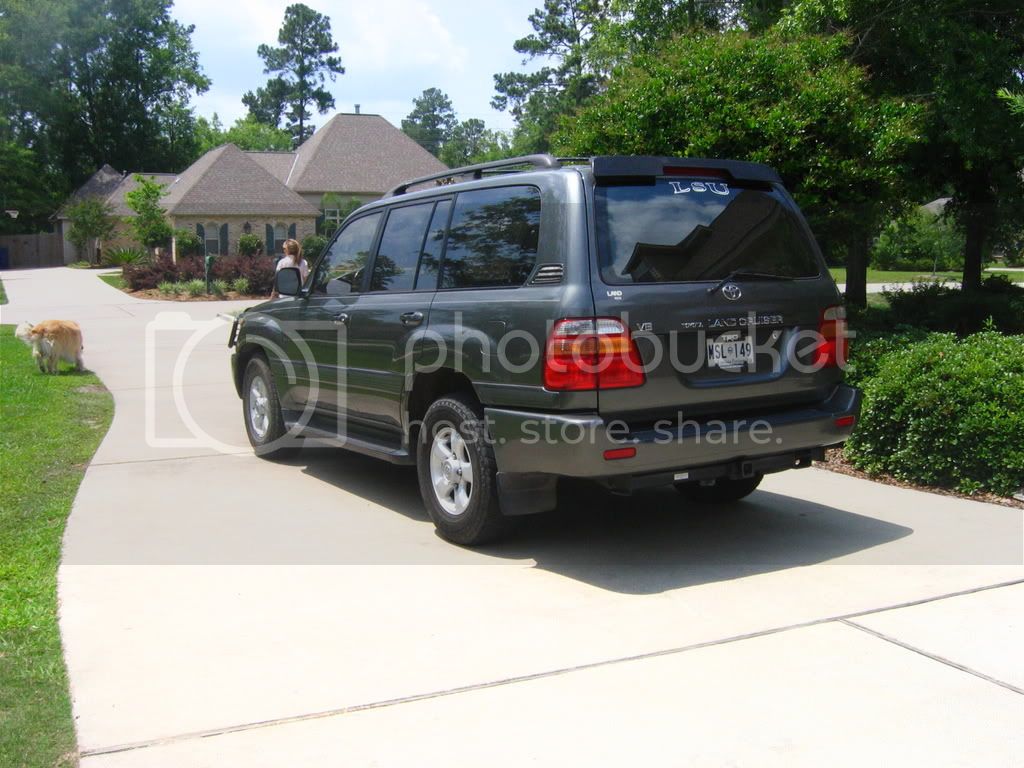 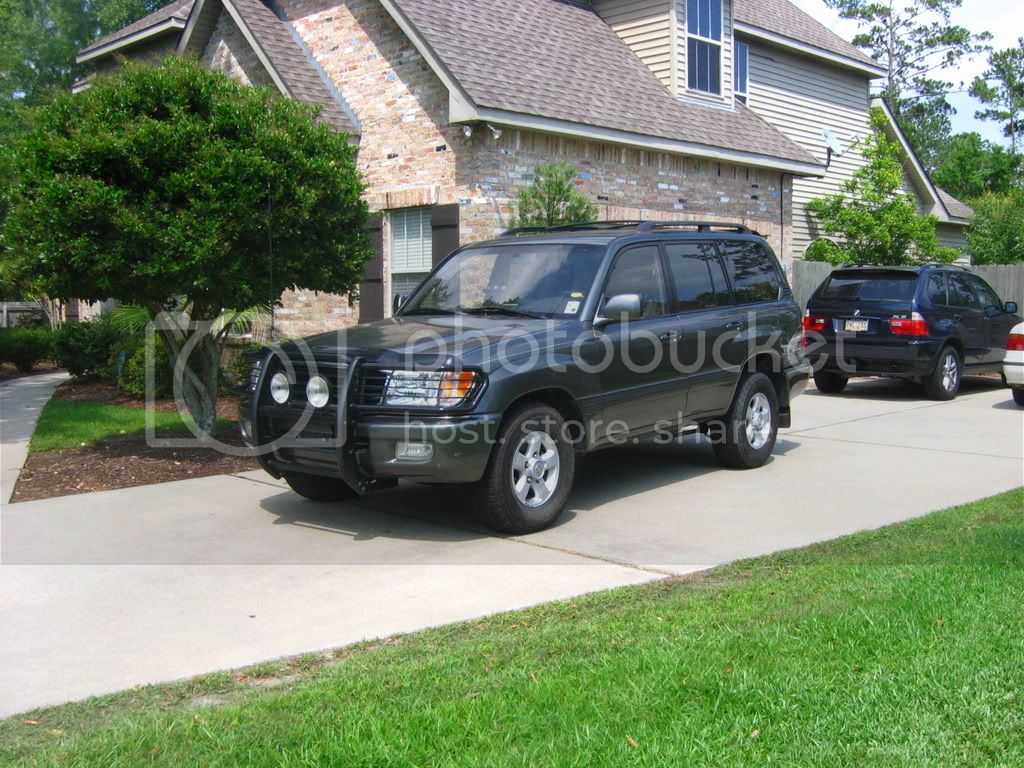 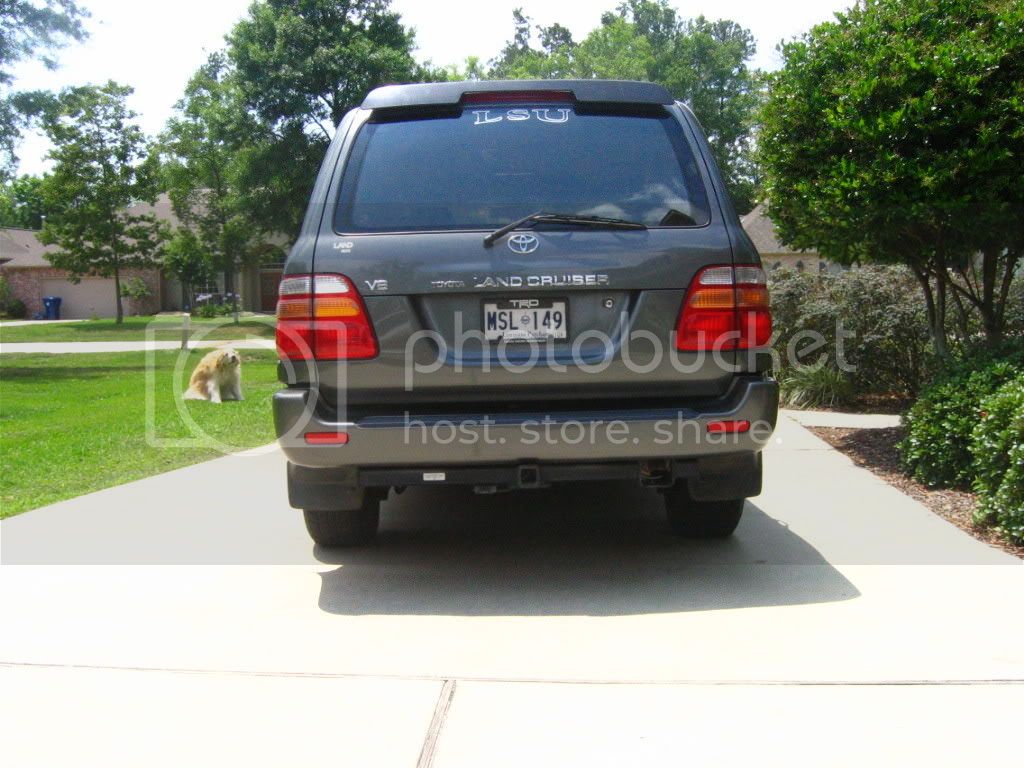 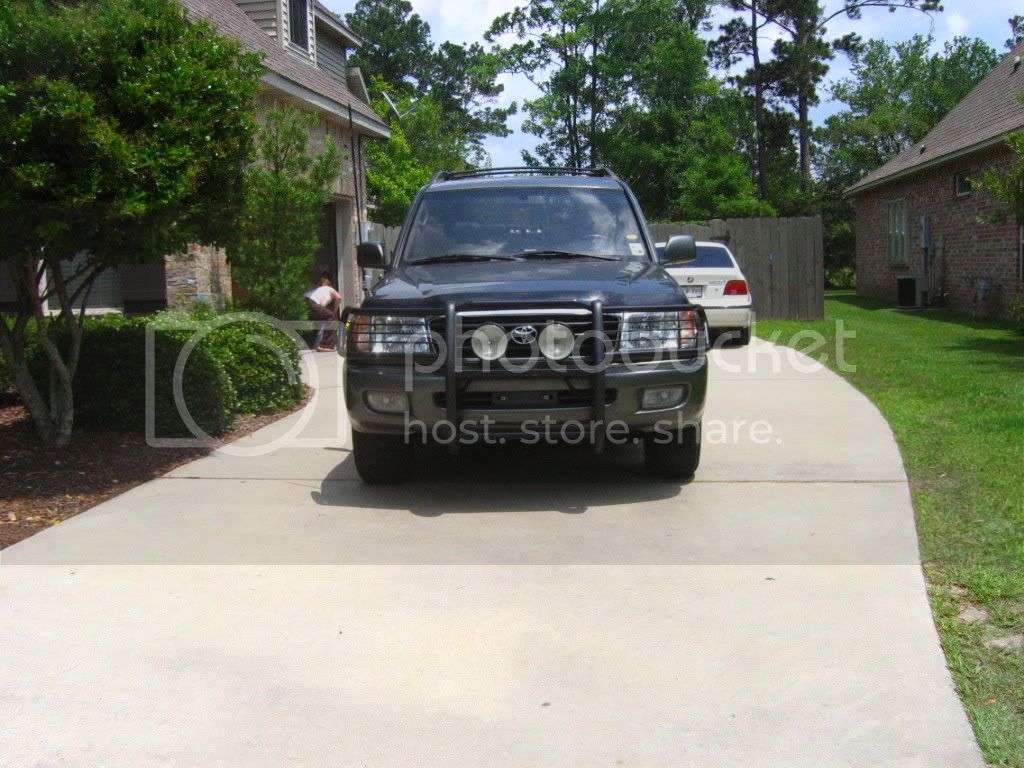 about 4 weeks ago i placed an order with Slee Offroad after doing countless amount of research on here (however it wasnt enough, as you'll see). i wanted 3" of lift in rear and 2.75" in front and wanted to run 315 tires. i read about many different set-ups and what people had and liked and made choices on that, and what the guys at Slee had to say. i was originally going to go with the 865 springs plus the spring packs, but they recommended i try the 860 springs, which i did (there was a thread about them that came up about a week before i made my order). and despite all the drama associated with them, i opted for the N74L rear shocks. i also grabbed the diff drop as well. i dont really have in progress pictures, as i did most of this by myself, or with my dad's help and didnt have time for picture taking, though everything was really straight forward and i studied the build-ups in the FAQ before attempting. 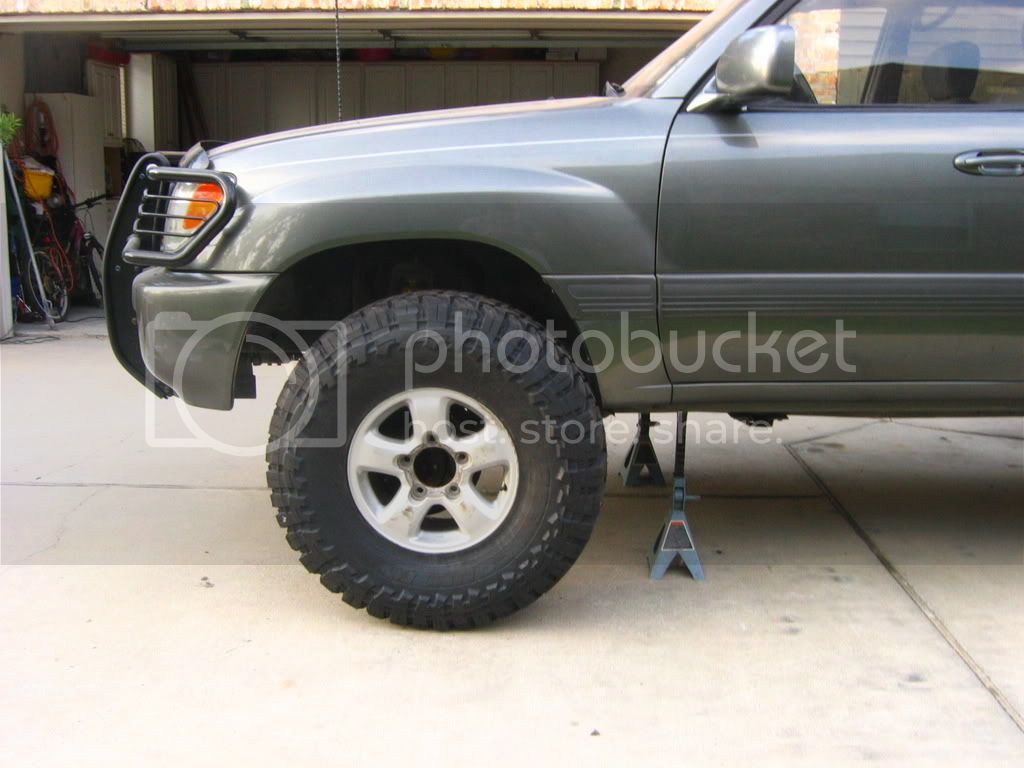 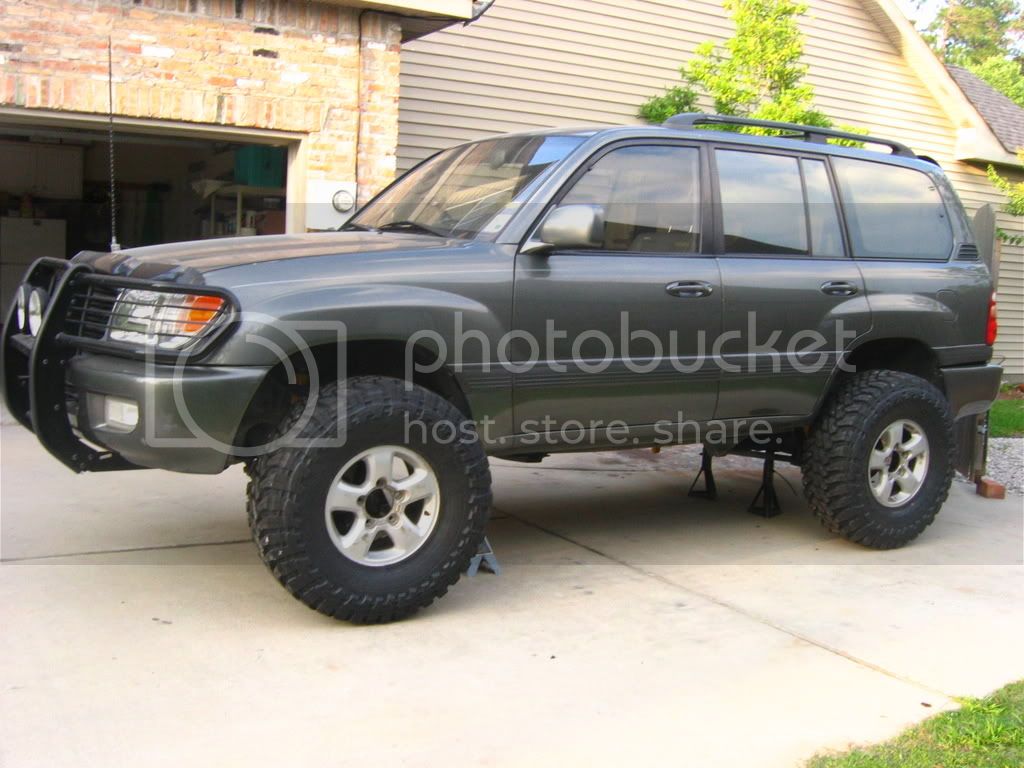 the tires i chose are the Toyo Open Country MTs in size 315/75R16. these tires have excellent road manners, quiet for a MT tire, and perform well offroad (though i lack experience in that department, but i had excellent traction in the dirt aswell as the thick louisiana mud, but that could be the all lockers). the only downside is they are very heavy and a big PITA to mount by yourself. 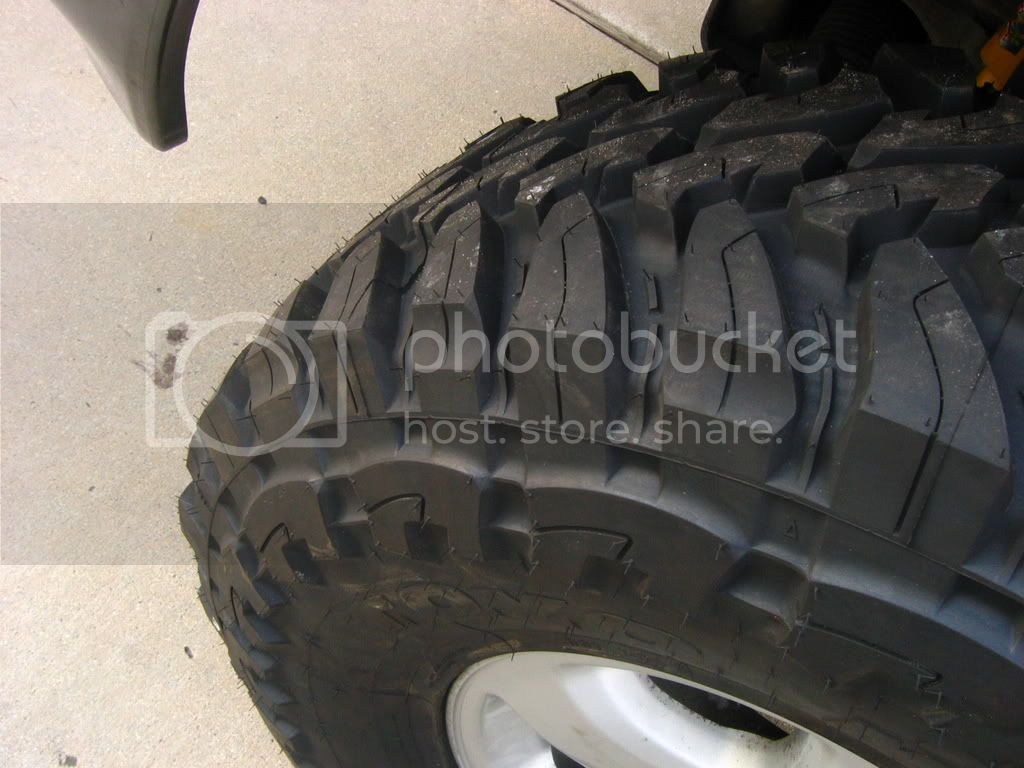 It was here that i ran into the first snag. too much researching made things blur together and i forgot some essential information. while the Toyos were 315s, with the side lugs they were 12.9" wide. i got the tires on and they hit the upper a-arm. damn. and i wsa trying to get the rig ready for a local land cruiser meet the next day. well it sat up on jackstands for a week and i ordered some wheel adapters. i ordered the 1" wheel adapters from the same place hoser did, www.motorsport-tech.com. quality and everything seemed good and i havnt had any problems with them yet. i ordered the low-profile lugs from them too. 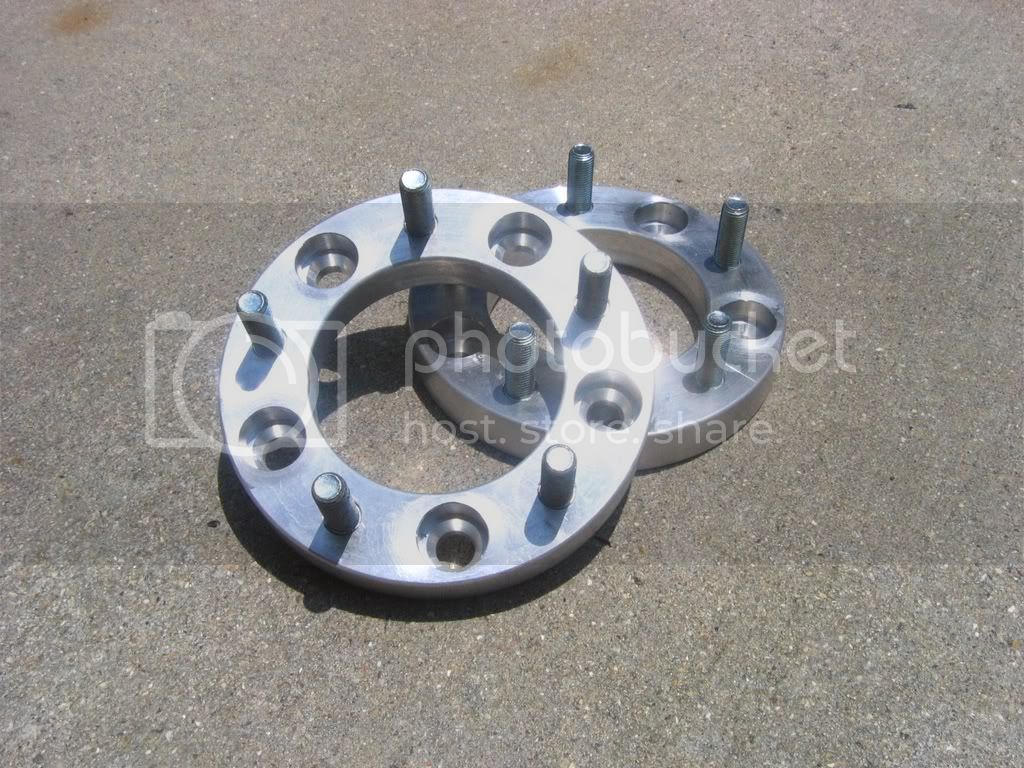 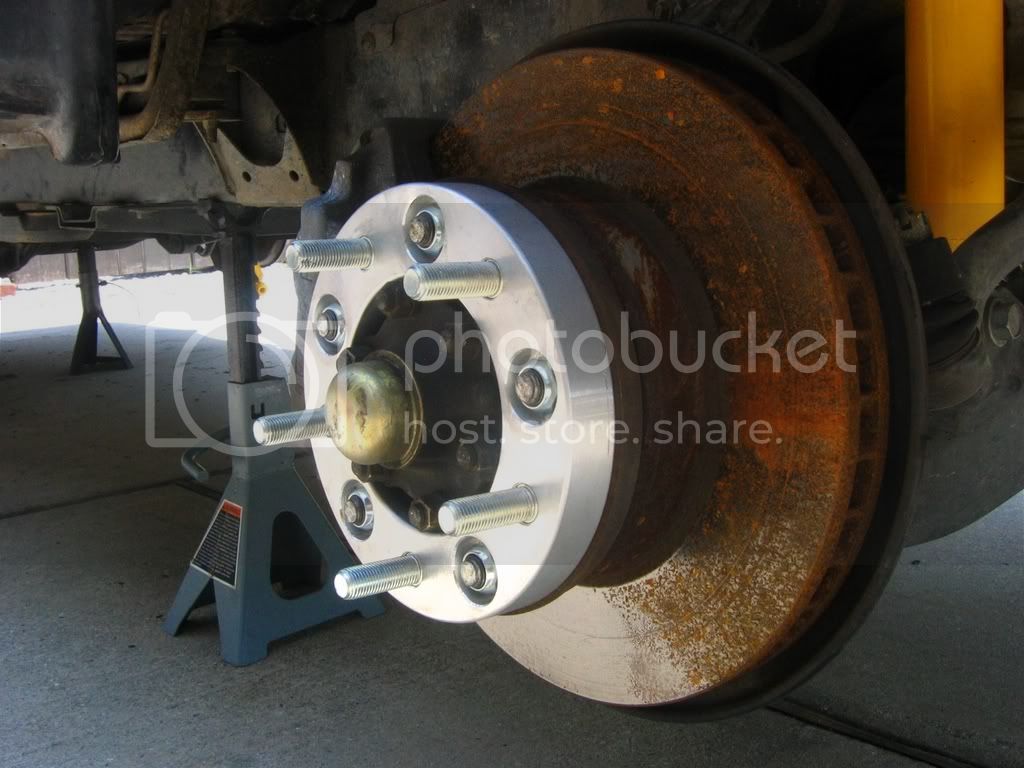 here she sits after i got the wheels on. this was before i adjusted the suspension. i was so excited to drive it i forgot to take pictures of it after i adjusted them. this is basically the torsion bars almost fully maxed out. the tires practically lifted right when i jacked up the car. i had to jack it up all the way at the closest part of the frame, so i figure i have about 21" of ground clearance at the frame at full droop. the tires also stick out past the fenders maybe 1/2". and the only clearance issue i have found (besides the rear bumpstops which i talk about in the next post), is the weld seam in the rear of the front fenders. i trimmed back the plastic and took the sawzall to the seam. i think i may have to get that re-welded as it look like some of it may have started to split. note that the tires would barely hit that while driving on the road; if you run a tire this big it will hit that seam just by turned the wheel (though just barely, i had to drive about 150 miles like that before i had a chance to fix it) 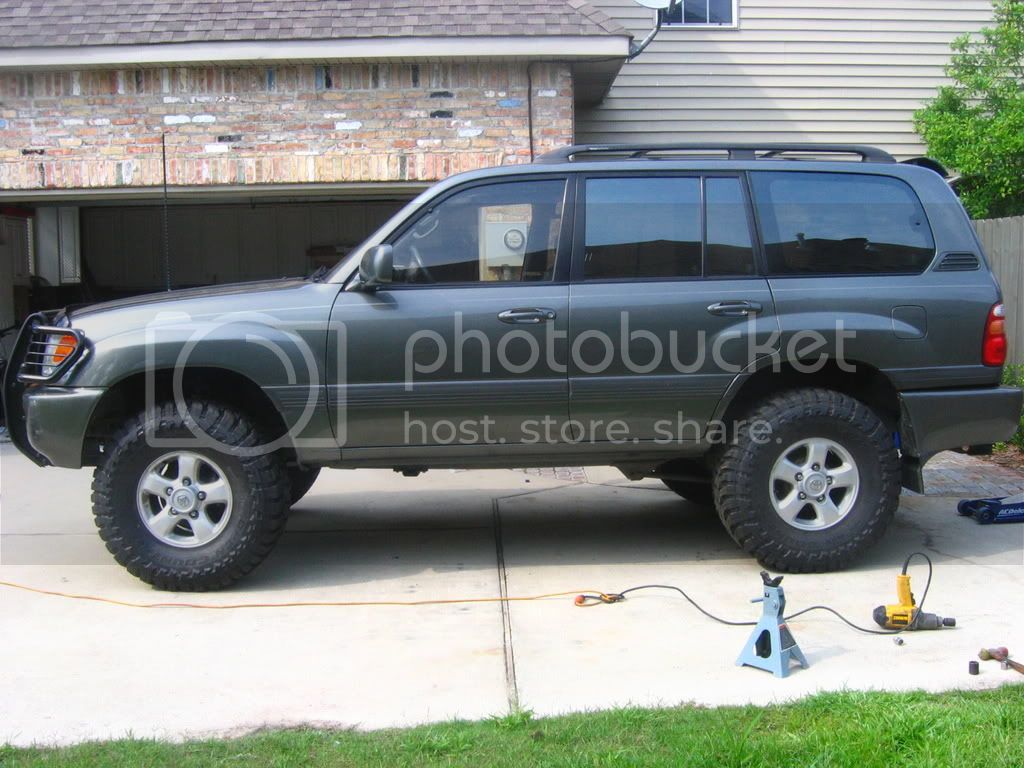 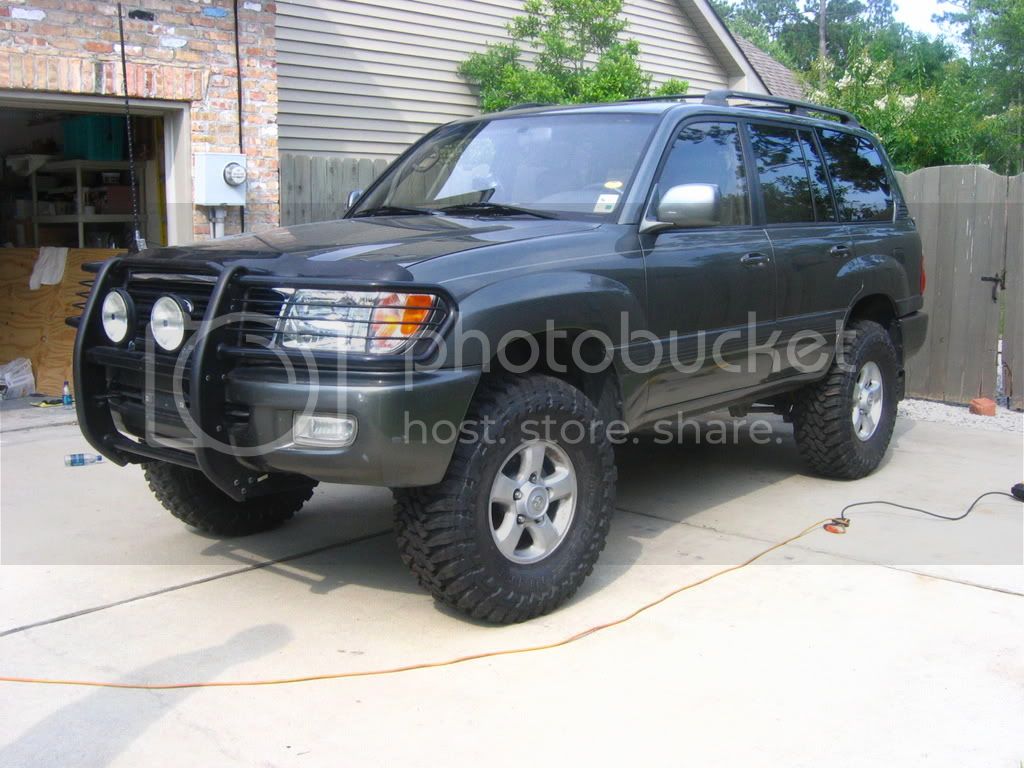 This past weekend was the Louisiana Offroaders Expo. Saturday was the "car show" event which included vendors, activities, and a test track. first time the cruiser got to stretch its legs. the also had an RTI scale/ramp there, and i got up 73" with a wheelbase of 110" (their measurement) for a score of 663. now i have no idea how good that number is or how it relates to other rigs. i know my 40 got around a 760.
check out that mad flex, y0

originally the both rears were touching and the front was up, but right when my front tire started to go down the ramp it tilted VERY slowly. note the fully tucked rear tire. i did not have time to get bump stop extenders made and it rubbed fairly well in the fenders.

Sunday was the fun part. tons of people (jeeps) showed up and our local TLCA chapter (Bayou State Land Cruiser Association, check our forum at the bottom) made its first appearance. the 100 definatly held its own, following everyone with no problem, and in some cases, better than everyone else. i got everything from "wow, im impressed" to "that thing turns like a jeep" to dirty looks as i idled through 6" deep mud puddles. i am glad it did turn like a jeep (lol) because those trails through the woods were very tight. i learned the hardway to watch my rear quater panels when turning. i also have small dents in my front fenders from the brush gaurd from hitting and pushing trees. the head index for that weekend was somewhere around 101* and 103* and i got to do it all in Air Conditioning, soft leather, and my XM Radio

this was the hardest obstacle in the morning trail, especially for beginners. you come down that slippery hill, and when your front tire goes down that first rut, the whole car, slides about a foot and a half down and to the left up against that log. once you get down, you have to go down that muddy wash and fight the ruts and get up the other side. all the light 40s and jeep would just push and "understeer" on that muddy hill on the way up all the way into the woods. however, when the 100 did it, it made it on its first try. supposedly i wsa the only one to make that on the first attempt.

in the afternoon trail, at the end, there was the ~50' steep muddy hill, with a deep muddy pit at the bottom. took about 5 tries to get all the way up. a few of the jeepers had to get winched up and one broke an axle shaft, though i have no good pictures of it.


here is our club's photo album of the event.
http://s151.photobucket.com/albums/s142/BSLCA/LA 4x4 Expo/
tons of pictures of all the cruisers that were there. the white 40 in there is the one in my sig. that also got new tires (35x13.50x15) and a new softtop a few weeks ago, but unfortunatly got ripped from a lo-hanging branch. thats my dad driving the 40, and im the scrawny kid in the gray shirt
Last edited: Jun 13, 2007
Cole Haddock
BSCLA Member #17
76 Land Cruiser
99 Land Cruiser
D

Nice write-up and pics! Good to see the truck in its natural element.

Interesting your comments on the dents caused by the "brush" bar being bent back into the front of your truck. This is why they are known around here as "damage-multipliers" and you should seriously think about ditching it and getting a real bumper ala Slee, ARB, or TJM.

nice work. looks great
can you post a pic of your spring retainer?

Thanks for sharing, its like having two builds going at the same time, just a few more items for ROTM - I am about 20 items away

Great looking 100 and thanks for sharing you ideas on why you selected your parts, it helps those of us that are dreaming about it.
2008 FJ Cruiser Trails Team. 285/75-16 TRD Rims, CAI, exhaust, skid plates and sliders. In tow: 2001 Coleman-fleetwood Tacoma pop up.
The

dclee said:
Nice write-up and pics! Good to see the truck in its natural element.

Interesting your comments on the dents caused by the "brush" bar being bent back into the front of your truck. This is why they are known around here as "damage-multipliers" and you should seriously think about ditching it and getting a real bumper ala Slee, ARB, or TJM.


the dents behind the bursh gaurd are minimal and are about the size of a quater, at most. they are more like dimples than dents. and for the ammount of trees i had to persuade i was glad i had it. however, like you said, i would much rather a full bumper and i would probably go for Slee's. i just need to pay of the lift first

Excellent! Excellent! I'd a like to hear that rub!

That brush guard is a little different than my old one. I don't think it would bend into your hood.

ShottsUZJ100 said:
Excellent! Excellent! I'd a like to hear that rub!

That brush guard is a little different than my old one. I don't think it would bend into your hood.
Click to expand...


shotts, what are your thoughts on your 2" bumpstops? do you feel like that is the amount to lower them? do you think 1" stops could work?
Cole Haddock
BSCLA Member #17
76 Land Cruiser
99 Land Cruiser
S

Colicious said:
shotts, what are your thoughts on your 2" bumpstops? do you feel like that is the amount to lower them? do you think 1" stops could work?
Click to expand...

2. On MY 100, with my Slee Bumper.....2" is needed. At full compression my tire will just make contact with the bumper. It's not enough though to stop progress. At 1", the bumper might stop the wheel from rotating.....not good.

nice rig and even nicer sticker on your back glass!

Here are some pictures of the spring retainers and the brake line mount extenders. 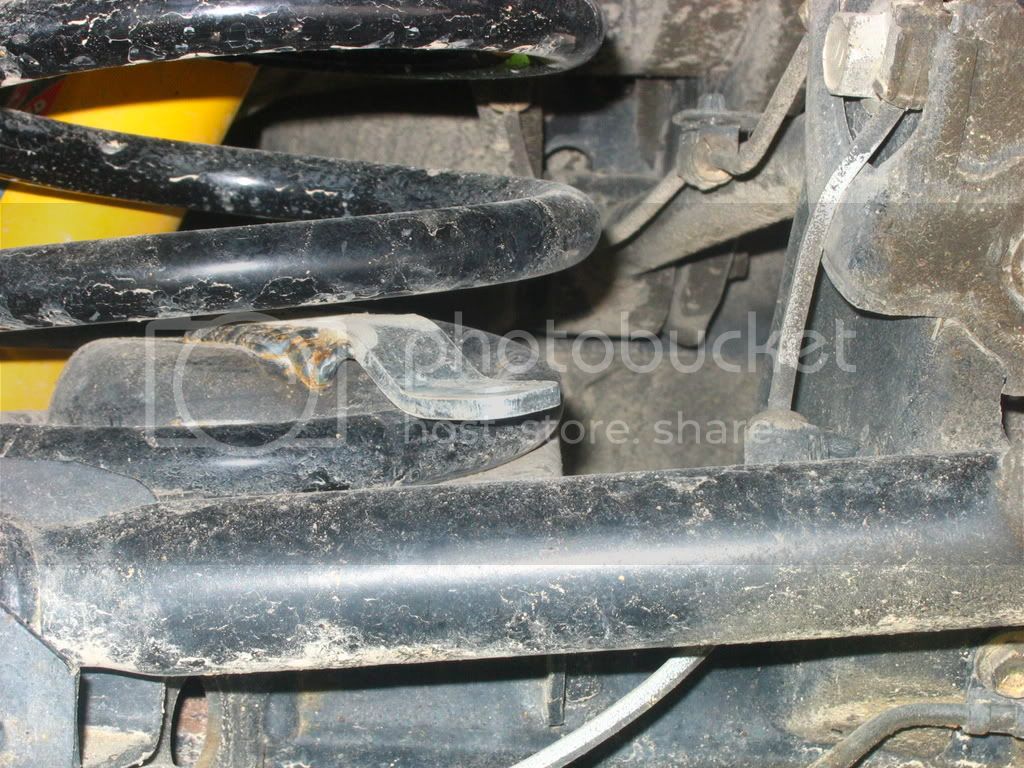 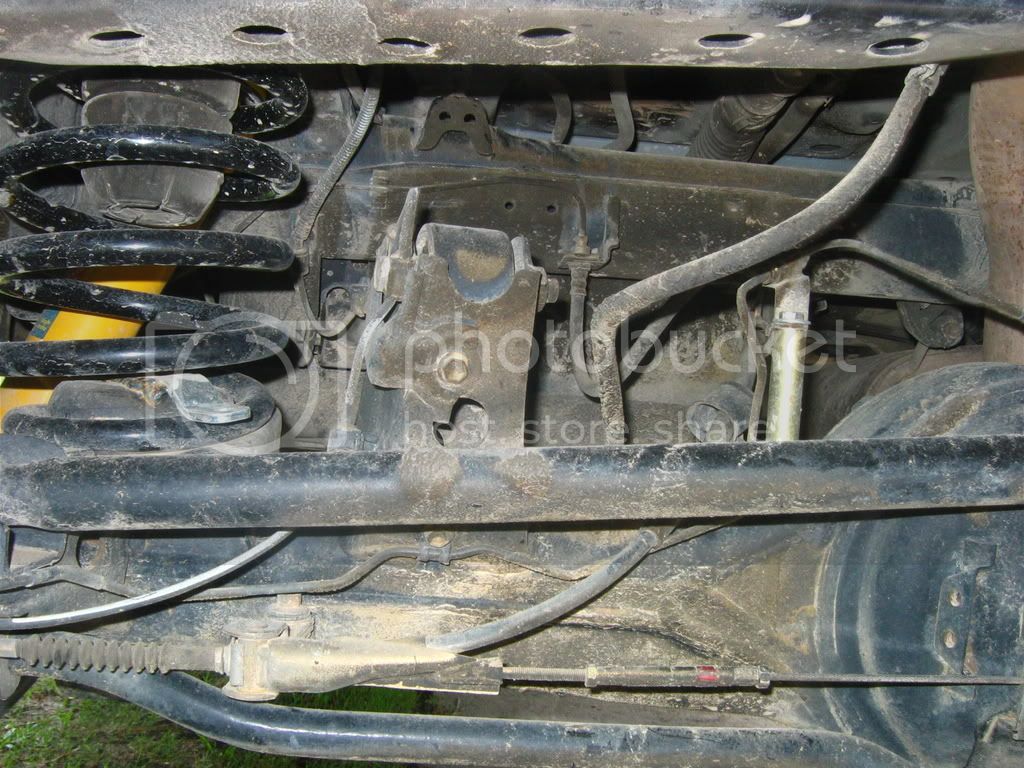 and this is how she sits now 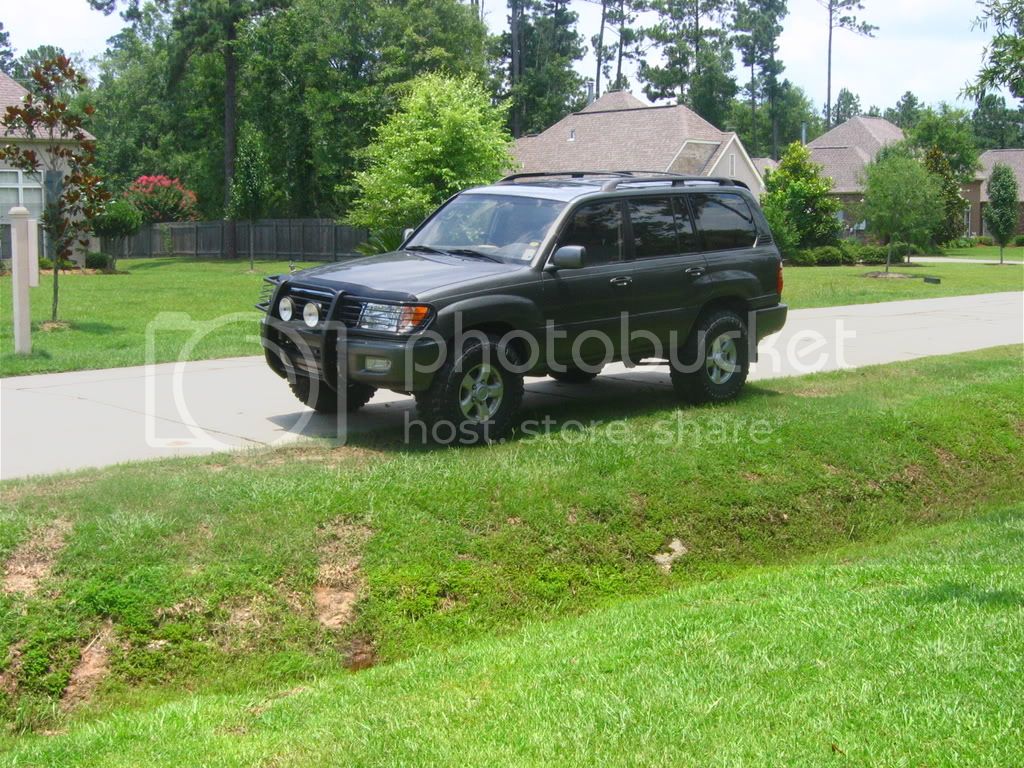 and here is another flex shot from the test track

Nicer retainer than we put on!

I enjoy these kinds of threads too...very awesome write up, and really enjoyed your pics!
'01 UZJ100 Black

ShottsUZJ100 said:
Nicer retainer than we put on!
Click to expand...


unfortunatly it was probably a lot more expensive than yours as well. i need to learn how to do that kind of stuff myself
Cole Haddock
BSCLA Member #17
76 Land Cruiser
99 Land Cruiser

2 questions for you guys
1. Do yall know where to ge the CB ant. bull bar mount?
and
2. What are yall thoughts on disconnecting the sway bar while offroading. do you guys think that will help flex out enough to warrant the trouble?
Cole Haddock
BSCLA Member #17
76 Land Cruiser
99 Land Cruiser
You must log in or register to reply here.

Got my first buck of the season