Since Patches84 is having issues with posting pics....

...and his Troopy is really an amazing machine, I'm assisting with posting a few pics of the rig. I'll let him fill in the specs! 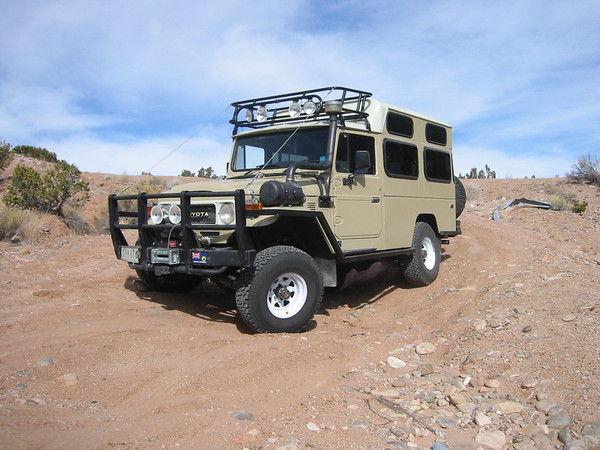 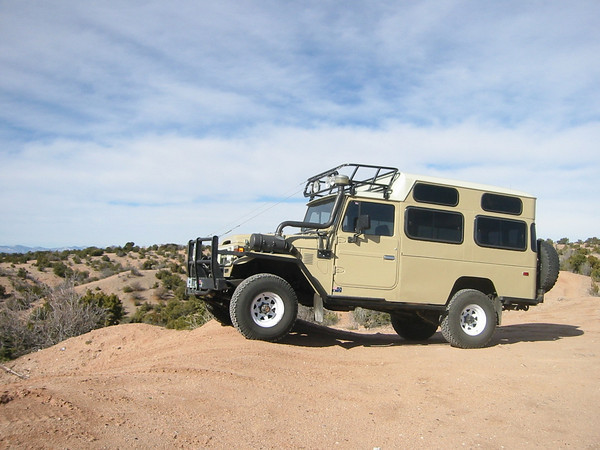 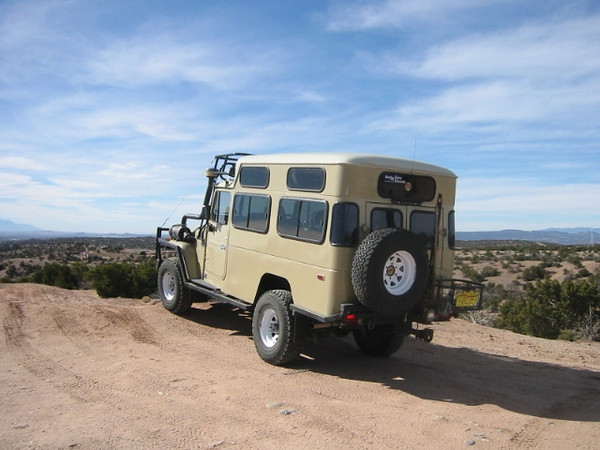 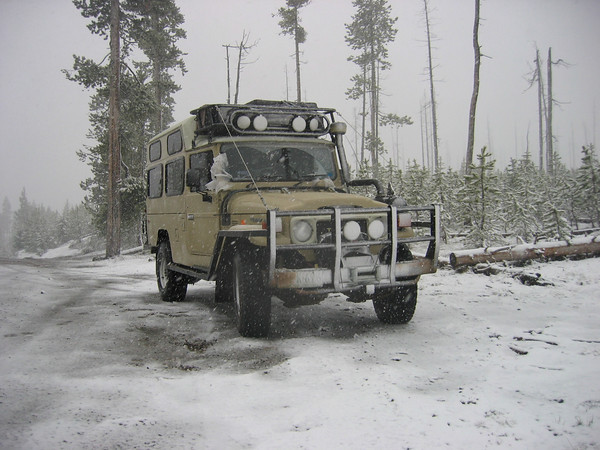 That roof is AWESOME!!! Did you fab that yourself or is a professional conversion??
Finally I can get what I've always wanted....a used Toyota.

That thing is wicked cool!

If you've got time to spare in the Santa Fe area anytime soon, let me know. I'd love to check it out.

I love the Donaldson on the fender.

Damn nice Troopy, now I have to get a new pair boxers, I am spent.
Would love to see some info. on the top and see some pics of the inside. Of course if I keep this up the girl friend may get jealous.

Only one word...WOW!
'21 and Loving it!
Halfway back to Colorado!

Thanks for doing that Hltopper. I will post some more pics of her when I get a chance later in the week. She is actually an HJ47 (or was), but now runs a Vortec 350. For now, I will just give some brief details:

I have owned her since Oct. 1996 when I bought her from the orignial owner, who was an old Dutch tea tree farmer in Murwilumbah, NSW. He was a retired school teacher, and he bought the truck so he and his wife could tour Africa in it. They shipped it there in 1986 and spent 18 months touring around- mostly South Africa I think. When they brought her back to Australia, she spent most of her time sitting, and some touring around a bit. She had a bit of rust from several beach holidays up on Frasier Island and the York peninsula, but I have since cut all of that out.

I brought her to the US in 1997, and have since made many 'improvements' to her. I had her turbo-charged in Melbourne, but eventually put in a brand new Vortec 350 in 2000. The engine runs the 'factory' power steering (from a HJ61) and air con from the Chevy compressors, and sits in front of the factory H55F 5 speed (which I bought new from Houston, Tx) and a transfer case from a 1987 60 series with the 32mm idler shaft. All of the shifter come out of the factory holes, so from inside, you cannot tell that therre is anything other than a 2H in her.

I have since replaced every piece of window felt, window rubber, weatherstrip, lights (indicators and brake lights), latches, catches and switches that Toyota still makes, and painted everything else. I have a beautiful, rust-free LX windsceen frame (three wipers) sitting in my shed here in Australia- I just can't wait to get home and put it on- it is even the right colour! I keep her bathed in fish oil to prevent rust, and wash the salt off of her after every snow fall.

Let's post other troopies on here as well- anyone? I started a thread for troopies, and i'd love to see as many photos on there as we can get.

Here are the grilles I welded on after a trip up to Glacier National Park- H4 headlights ain't cheap! 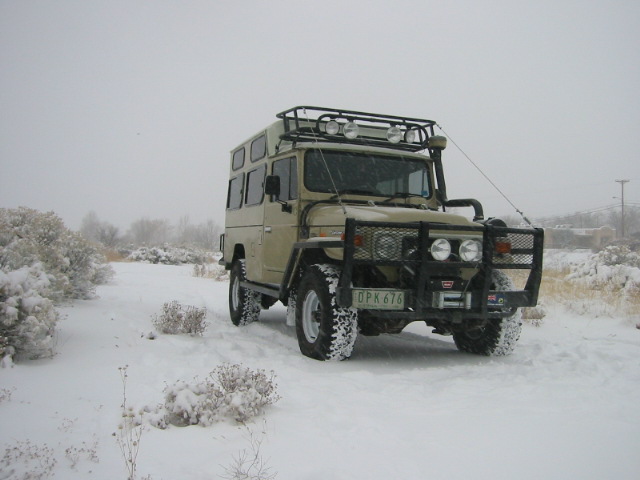 A couple shots of the Votec under the bonnet. It is a 2000 5.7 litre 350 which Jerry Nichols got for me brand new back in 2000. I installed it with a new H55F and a re-built FJ60 transfer case, and I put a pre-luber in (lower right of the photo, with blue hoses)with a larger-capacity oil pan and a remote oil filter (which runs the PH8A style filter, so it is a bit factory) and oil cooler.

I ran Corvette Rams Horn manifolds going down into a 2.5" exhaust with a cat and performance muffler. Stu at All Custom-X exhaust did the work, and he is an absolute artist.

The engine has just under 40,000 miles on it now, and it is a flawless machine. I was once a faily staunch purist, but I am sold on the Vortec. Driving this truck as much as I do (or did, before moving to Australia for a few years), and as much cross-country as I do, the 350 is a dream. She cruises very comfortably and quietly at 80 MPH, and she will go up La Bajada or I-70 to Vail at the same speed as the traffic.

By using a 60 series top loader on the gear box, I was able to move the gear box forward about 3" for the 350, and still have the shifter come out of the factory hole. The only hint that there is anything other than a stock engine in her from inside is the Autometer 3" tach sitting in the bezel where the factory tach used to sit. I put all of the Toyota senders on the engine, so the oil pressure and temp run through the factory guages on my Toyota guage cluster, and the check engine light runs through what used to be the filter light for the diesel.

The radiator was made by Tom Chauvan in Forest Grove, Oregon. It is for a 79 FJ55. I cut the factory radiator ox bow (which is about 1" wider for an 81-84 40 series than for the 80 and older) and welded in 1.5" of another ox bow I had from a '76. This allowed the larger radiator to fit in without any problems, and cooling has never been an issue. In Phoenix, when it was 120F (48C) and I had the air con on, the engine got up to 215F, but that is the hottest she has ever gotten. She never got over 200F when I towed my FJ40 from Boulder to Phoenix on a tow dolly. The air con radiator is also larger, to fit the entire way across the FJ55 radiator. I have not made a fan shroud yet...one day.

Just for fun, I attached a photo of our 1972 FJ40, which we got brand new, and still have in the family. This photo was taken on Engineer Pass in 1974- I was 4 years old: Cruisers run in my blood. 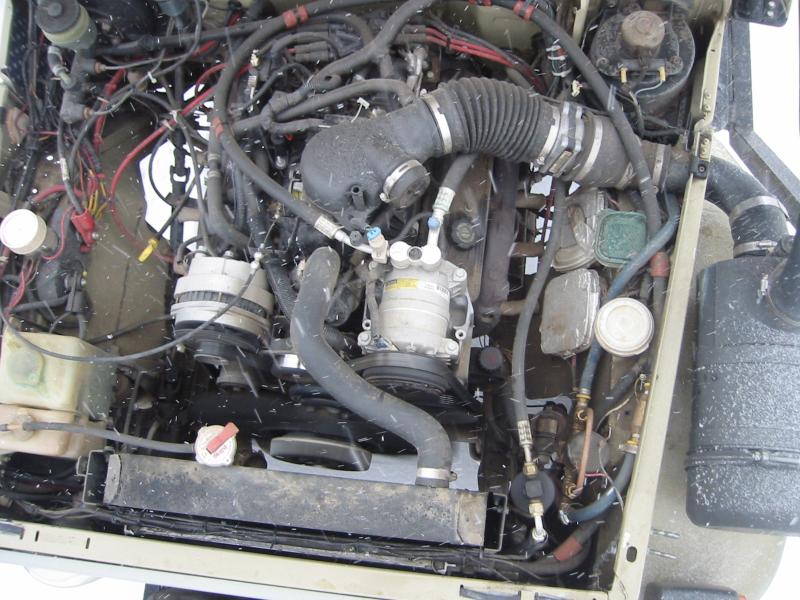 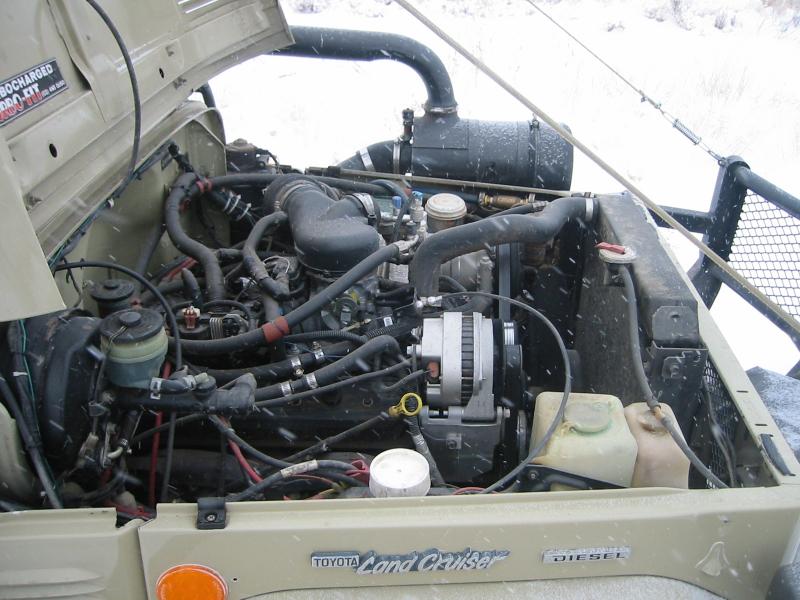 and a historical pic. 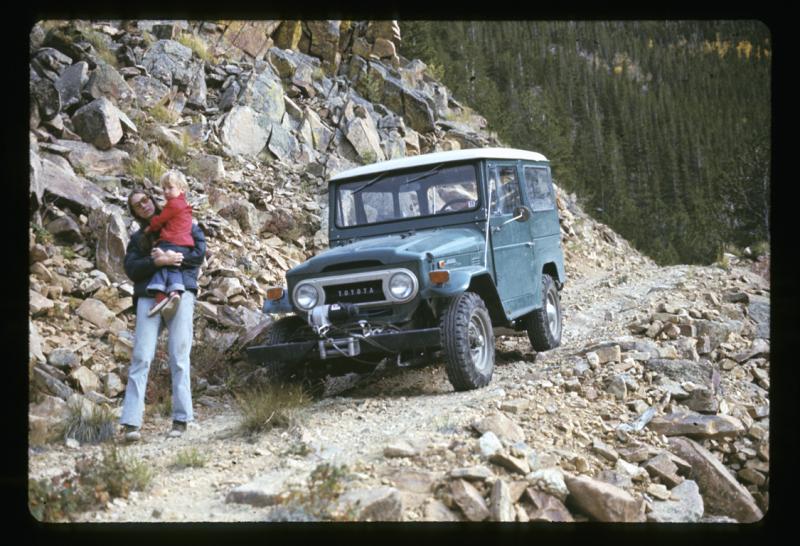 very nice rig and a great powertrain combo to boot!

I'm drooling....great Troopy! I can't wait to see in in person someday!

That photo of you as a tyke with the family's vintage truck is the stuff the Toyota ad department would really like, to do one of their retro-inspired ads. Why doncha contact them!

Thanks for the compliment. However, I'm sure Toyota can find better examples than that- I don't (or should I say won't) drive a 200(c: I have dozens and dozens of pictures of our 72 FJ40 from 1972 through to today- many with me from the age of 2 until now. The truck is called the 'Toad' because when I was young, I could not say "toyota,' but rather 'Toadota.' Just one of those funny stories.

Patches (my troopie) got her name from a good friend's 9 year old boy. I had fixed the two small rust bits in the back, and replaced the rear doors with clean ones (one red, and one blue), and the bonnet was from a really clean '76- it was white. I had a new, primer black grille and right fender (guard) from Toyota and I had not painted her yet. This friend's boy looked at her for the first time and said: "Patches!." And so, from the mouths of babes...

Looking at your tag-line, I must be dumb, and it's surely none of my business, but are you an ex-patriot Americano, a long-term visitor, or a full-blooded Aussie?

I am an American, married to a dinky-die Aussie, and currently serving time in Australia(c: Looking forward to coming home one day, but in Adelaide for now. I still have my place in Santa Fe, so that is my home.

I did the engine conversion at my folk's house in Boulder, Colorado (they had a better-outfitted garage then than I did) and sold the turbo 2H to a bloke in Atlanta. I just got sick and tired of getting parts for the 2H- the final straw was when one of the glow plugs went out for the second time, and I had to start on ether for 3 weeks while I waited for another set. It is much easier to get parts now, but in 2000 the 2H was still as rare a rocking horse droppings in the US. I used to spend several hundred dollars on parts for the 2H everytime I was in Australia so I would have parts 'just in case.' I still have 5 or 6 oil filters...

I cut the fitting out of the top of a petrol tank from a Suburban, and welded that into the top of my second tank. I use an electric pump to transfer petrol from the factory tank to the long-range tank, and that is my main one. Now I run a factory Chevy pump, factory lines from a Tahoe and the filter, etc. The engine is simply amazing.

With as much more as you pay for diesel now, it really is cheaper to have a reasonably efficient petrol engine over a non-direct injected diesel. I may have gotten an additional 10-15% in miles per gallon with the 2H, but diesel costs nearly 25% more. Now I have the power of a Vortec, with the parts availablity of one of the most common engines on the planet. Love it!

Rare as rocking horse droppings.That gave me a good laugh.


It's better to be over the hill than to be buried under it.

I was looking for some photos of the interior, and some of the engine install (I'm thinking I only have those on SLR, and not on digital, which means I have to scan the bloody things) when I came across this photo. This is Patches on Black Bear, where Bridal Veil Falls crosses it at the top. THis is before I put the new tyres on, or had the rack made, but it makes a nice shot, and it will go nicely with Hltopper's shot on the bridge in Copper Canyon.

Jimmy Buffett for President.
http://forum.ih8mud.com/fj45-owners-club/219687-patches84s-fj45-troopy.html
You must log in or register to reply here.