Blue77FJ40 said:
Except for emissions checks every other year.
Click to expand...

Not sure of what the cut off date/vehicle age is for emissions test, but once I changed my '40 tags to 'hot rod' status, I no longer had to do the tailpipe test.

Speaking of which, I had to laugh, as during a tail pipe test, I nudged open the kick panel door, and the attendant closed it. I nudged it open again and the guy had a look on his face like when a dog tilts its head in confusion.

i've been wondering about this. the MD rule is to run the OBD-II test (just hooking up a computer) on cars 1996 and later, because that's when OBD-II was required in the US. cars 1995 and earlier get the sniffer test, because they presumably don't have an OBD-II port. however, this 1995 has an OBD-II port because Toyota was transitioning it in. is the pre-96 rule a hard limit, or will they do a computer test if an OBD-II port is present? only time will tell!

while the rickety muffler passed the exhaust safety inspection (which i'm still surprised about), it's still possible for the ragged and rusty old cats to fail the emissions test. frankly, i wouldn't mind replacing the leaky muffler, as it occasionally throws a P0401 insufficient EGR flow, and i wonder about the state of the downpipes as i sometimes smell a whiff of exhaust in the cabin when at a stop. new cats would be a lot more money, but at this point they might be a performance upgrade because of how old the current ones are.

Exhaust won't solve the P0401. That's an EGR control side issue. It's usually in the vacuum switches or modulator but could also be a clogged vac port in the throttle body or intake.

aha, thank you. it doesn't happen too often, and seems to be when i hit kickdown or WOT; i clear the code and it's fine for a while. maybe the sharp change in vac is messing with a switch? i definitely want to service the vacuum system at some point, but i wonder if a chemical cleaning would help in the meantime.

emilioAT said:
aha, thank you. it doesn't happen too often, and seems to be when i hit kickdown or WOT; i clear the code and it's fine for a while. maybe the sharp change in vac is messing with a switch? i definitely want to service the vacuum system at some point, but i wonder if a chemical cleaning would help in the meantime.

Stumpalama said:
I have a 1995 glove box manual for you.
Click to expand...

that's a nice surprise! i figured i might have a shot at looking for a paper manual, but also that it probably wouldn't be a 1995. thanks, i'll keep an eye out for you & your Cruiser.

oh, and your sig reminds me: KI6NV0

The P0401 code has to see a certain drive cycle to run it's test. It may just be that the cycle corresponds to somewhere you drive with WOT.

i'm new to Mud and kinda new to the DMV area, as i moved from California for a job at the start of last year. i'm also new to Land Cruisers, solid-axle drivetrains, giant SUVs, and off-roading in general - though i'm definitely not new to working on cars. i ended up here because i was looking for a second car to drive while i do a major service on my other ride (2007 S4 that needs an engine pull timing job), so i figured i would get something that's better for snow and camping in rough areas.

i was originally looking around 4Runners and Xterras, as friends have had them and they're solid rides. then i went into the Land Cruiser rabbit hole and emerged with the FJZ80 that Lance from IPOR was selling for someone else. this is massive and definitely not my usual style, but i think it'll be great for what i need.

i'll start a proper technical thread in the 80 forum, but here's a quick rundown:
it came with some pretty small and sorry tires, but as of last week it's now sporting a set of Grabber A/Tx in 285/75 R16. it also overheated on the way back from Fredericksburg (it came with awful belts that i shouldn't have driven with) and blew out the anonymous replacement radiator, so i put in a new rad (Liland all-aluminum) and associated parts.

of course, i dropped it off for inspection yesterday because i bought it in VA and live in MD. i'm pretty confident that it won't pass because of the cracked muffler and the broken instrument cluster PRNDL "D" light. i suuuuper hope i don't have to tear into the dash for a $1 bulb, but at least it would be an opportunity to replace them all with LEDs.

i'm planning on driving down to the swap meet this Saturday, both to meet the community and keep an eye out for parts. see you there!

Welcome. You certainly jumped right in, doing it in style. The 80 will feel small once you are fighting off the Suburbans and full size pickups on the beltway.
I haven't read all of the above comments, but I'd say just order WeatherTech mats front, rear, and hatch and be done with it. Good quality replacement seat covers aren't too expensive and make a huge difference.

update time! i didn't do much work on the truck the past couple weeks, as i'd been waiting for tools and parts (thank you, obviously artificial Amazon delays). but, i jumped back into it over the past few days.

i tightened up the right side hub nuts, which did remove the vertical play in the wheel and improved steering a little bit. there's still a tiny bit of horizontal play, though, and the car still seems to pull a little to the right. i'm not sure how to tell if the bearings are buggered, but i'll probably take it for an alignment, anyway, and see if that helps.

yesterday i did a tune-up for PM and to address a misfire. that all went pretty well, except for tearing the 326,000mi-old intake hose: 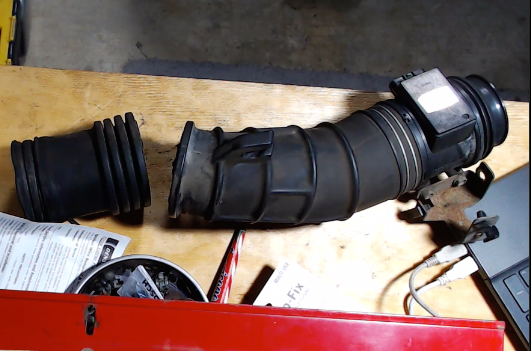 it wasn't very surprising, as the hose feels more like hard plastic than rubber at this point. i managed to get silicone tape properly stretched around it (after a few failed attempts) and i think the repair looks pretty good. i'll replace it eventually, but the tape seems sturdy enough that i'm not in a big hurry. 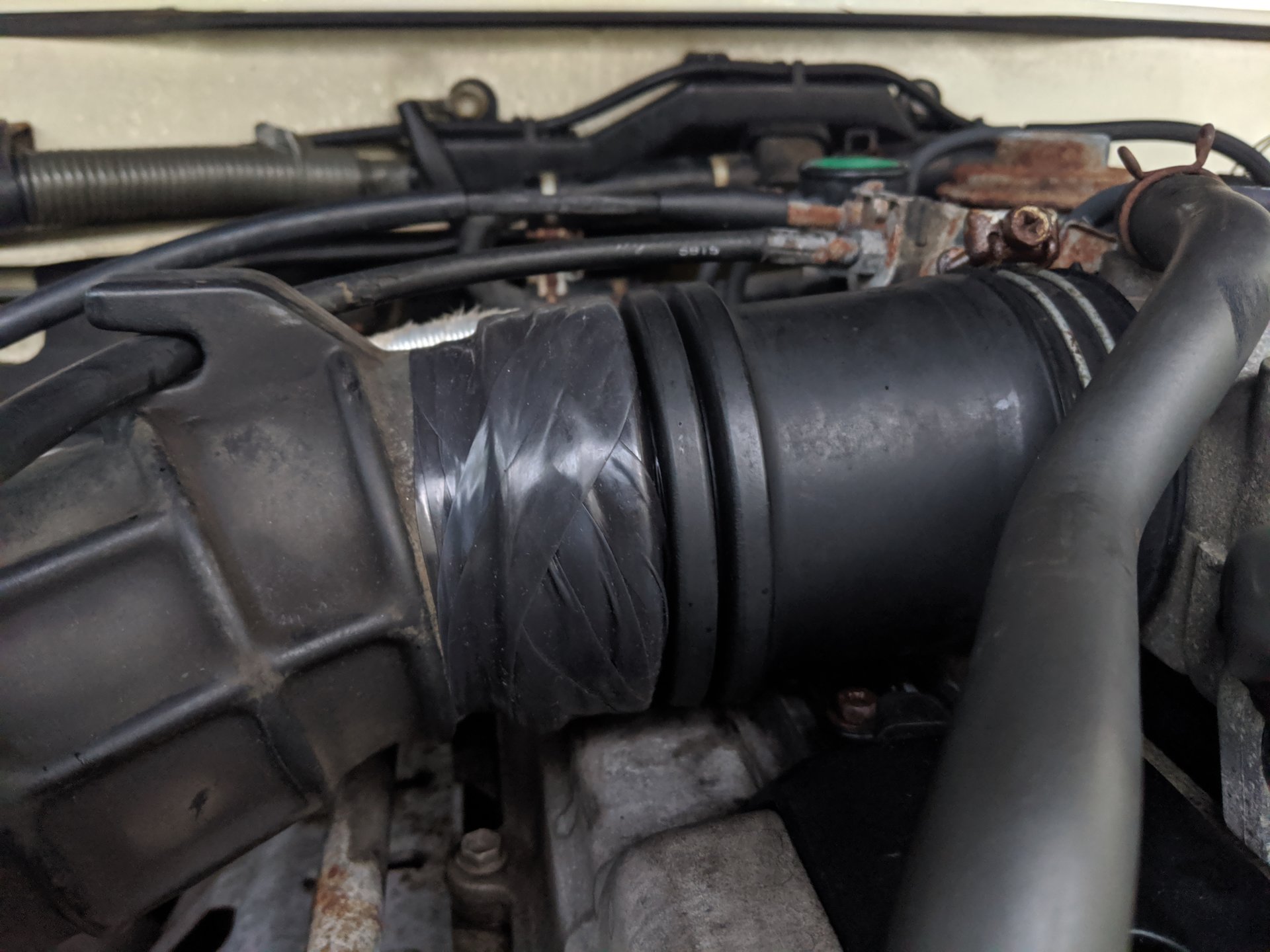 the tune-up consisted of:
hooboy, i hope i don't have to service that #6 cylinder again soon. did the ignition system and HVAC system teams even talk? a slight angle to those hoses and the job would be so much easier. at least i can say that i have fully sat inside the engine bay. 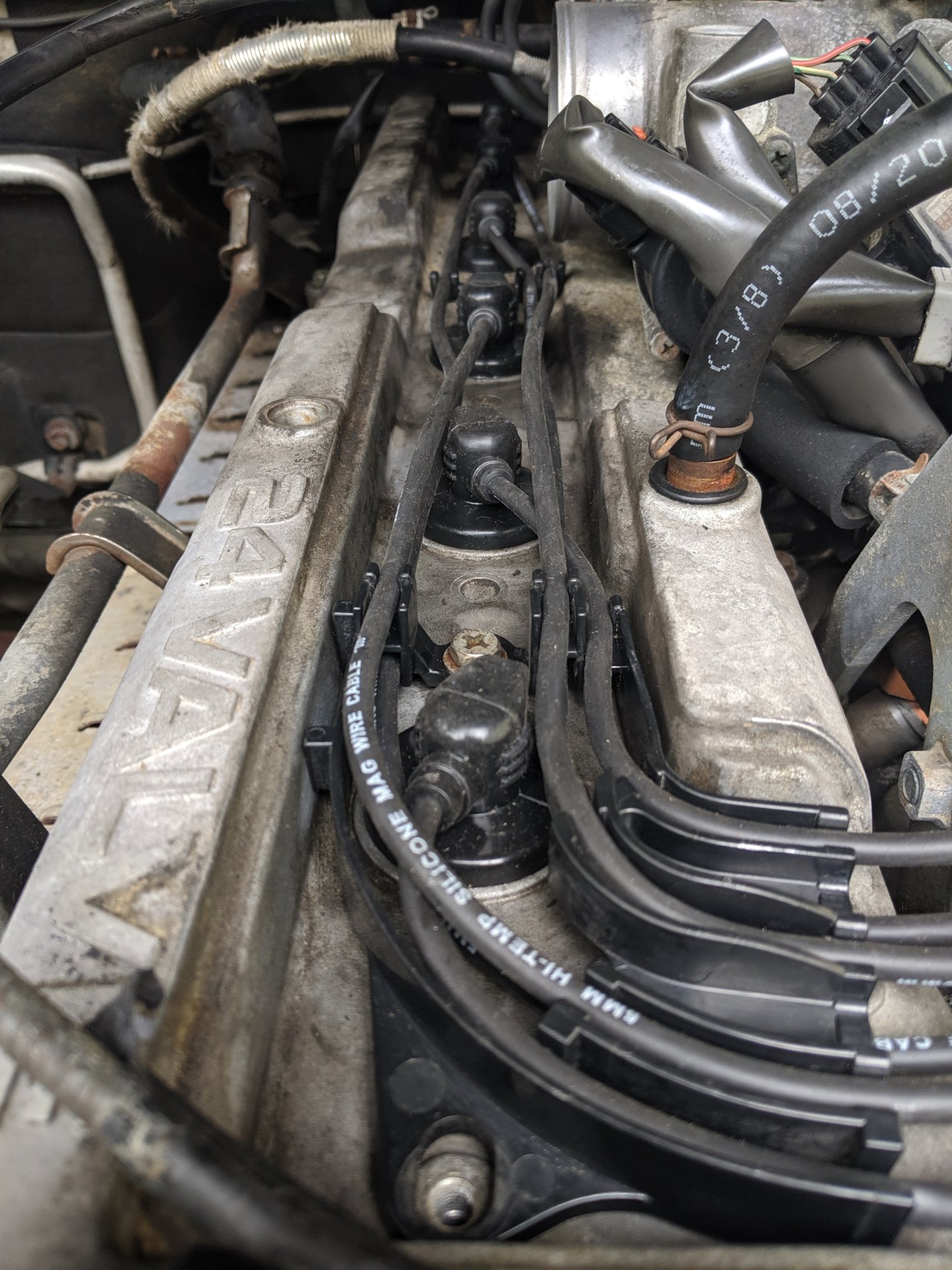 note that i'm missing ALL of the loose wire looms/holders/separators. all the bolt-in ones are in good shape, but this came with none of the others. the Denso wires are also a tiny bit longer than the red ones in there before, so they're a little more chaotic when popping out by the distributor. i got them run pretty well to keep them off the metal, but i'm still going to track down some OE ones to give them maximum life.

it definitely runs a lot smoother, especially under acceleration - it sounds pretty good when revving! there's still an occasional bit of unevenness that i can't identify, though. maybe the leaky muffler occasionally interrupts scavenging?

there's also noticeable oil wetness around a lot of the seam around the valve cover. i can't tell if it's a forward oil leak that's creeping back, or if it's the valve cover gasket.

but, enough of that! to celebrate the inspection, as well as get the hell outta town, i did a little overnight camping trip this weekend. i was going to drive north to Greenridge, as i wanted a place with fire roads or something, but the forecast was turning in to a lot of rain. instead, i searched around and ended up heading to Washington National Forest and Peter's Mill OHV trail.

so, i set out to drive a 4x4 on an OHV trail for the first time, alone, in a type of vehicle i'm barely familiar with, with no recovery gear but the stock bottle jack. what could go wrong? it turns out... nothing. i had a great time, met a few folks on the trail, and, most importantly, didn't do any damage (at least, so far as i've seen).

i got some great photos, too: 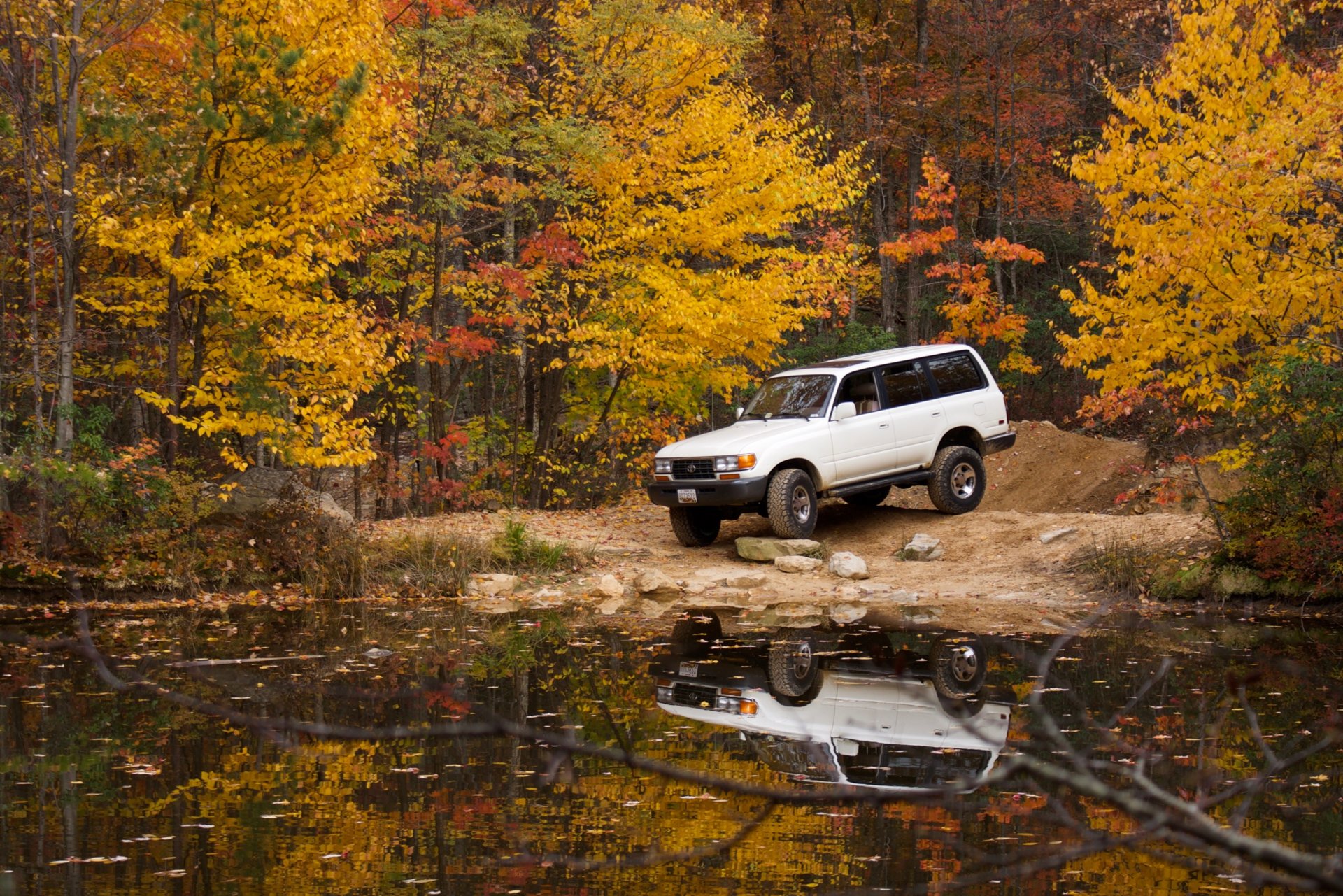 i guess that's the photo spot on Peter's Mill, because there was a Land Rover parked exactly there when i rolled up. i chatted with them for a minute, then told them i'd snag their photo spot when they left - it worked out pretty nicely.

i slept in the Land Cruiser at the OHV campground, despite someone's all-night classic rock playlist. at least sleeping was comfortable: i removed one of the middle seats and that was just enough to lay on a thick sleeping pad with my head at the rear. the campground was pretty full, including a couple groups taking up multiple sites, so i ended up parking in front of a closed gate (including packing everything into the car before bed, in case i needed to move it quickly). i parked on a grade, but was able to level it a bit better by re-inflating the front tires early and letting more air out of the back. it's another good reason to keep some short lengths of 2x6 handy. 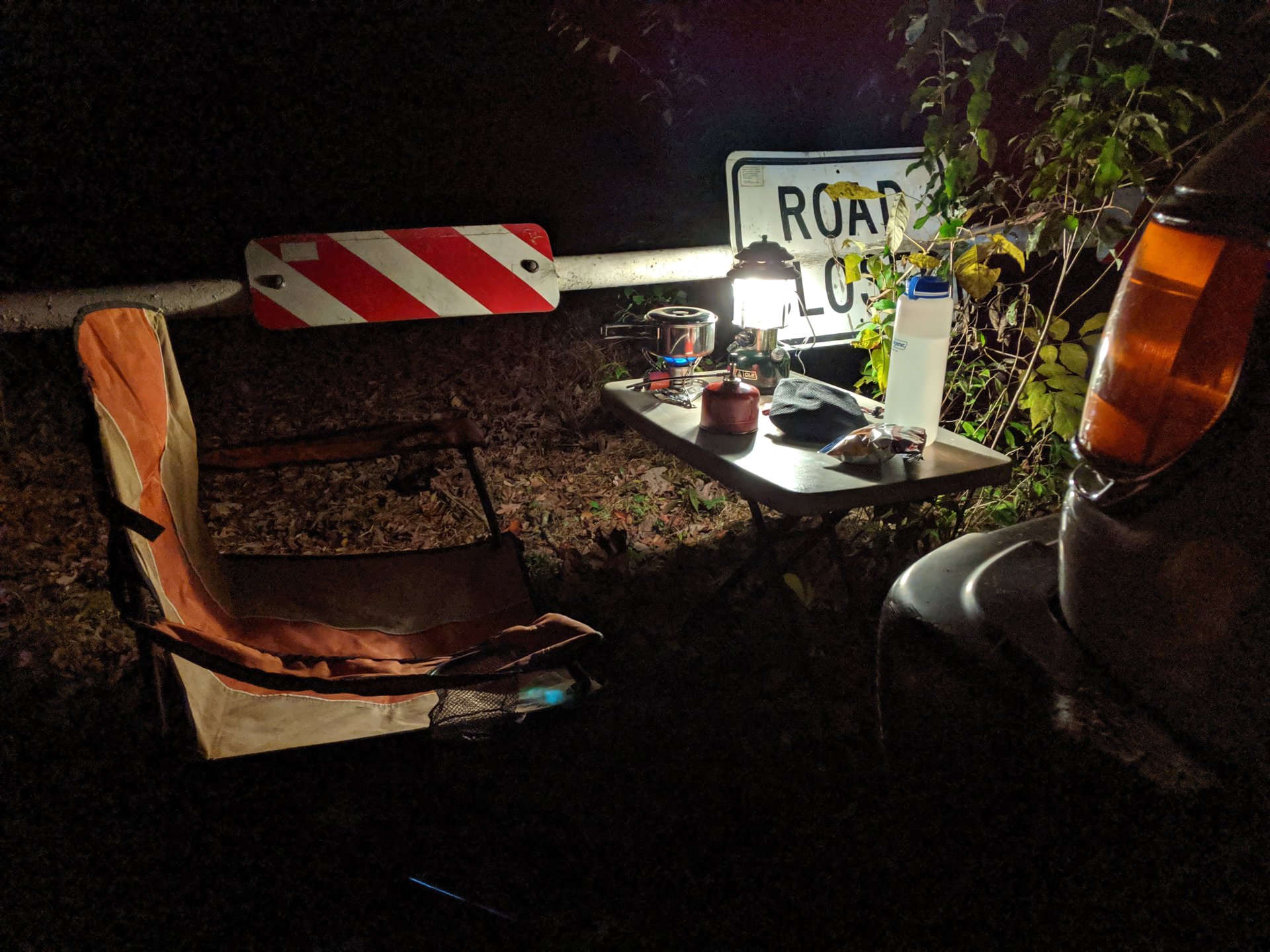 the trip wasn't entirely without damage: some ball joint boots that were cracked have now fully torn. i was already planning on replacing the TRE's and related ball joints because of the poor steering, though, so that's just more reason to jump on it.

I'm thrilled you had a great time as a newbie. Make yourself comfortable, the trucks will take care of the rest.

Calendar worthy photo of your truck!

thanks, folks! i definitely want to return to Peter's Mill, as it's such a nice area and the trail is about right for my beginner level. i started on the Edinburgh side, so i could return to drive it in reverse.

those side-by-sides are pretty fast: 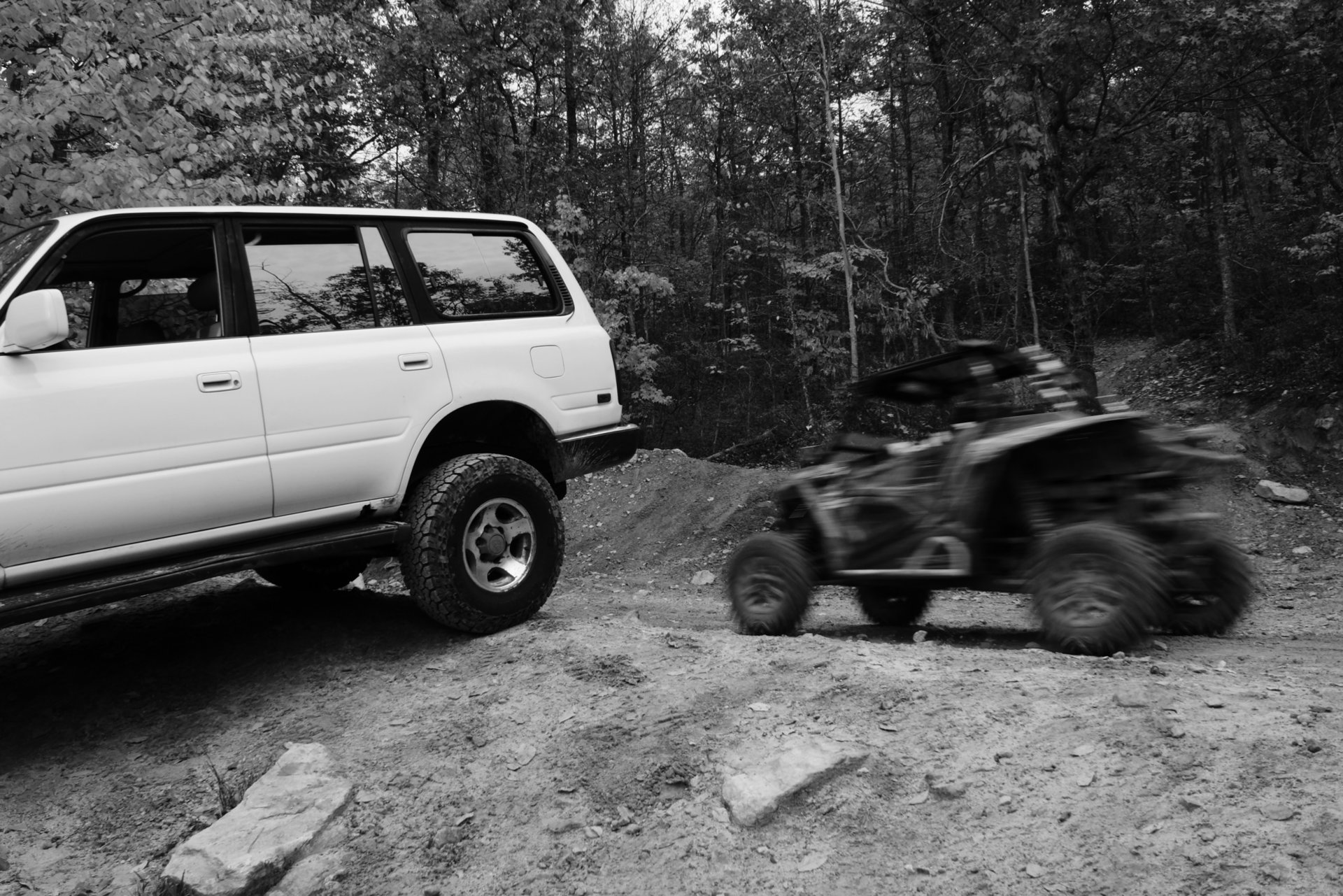 a modest start - i'm glad there were some muddy puddles to splash through, but not enough mud to cake up. it lessened my chances of getting stuck, and, almost as importantly, made cleanup pretty straightforward. 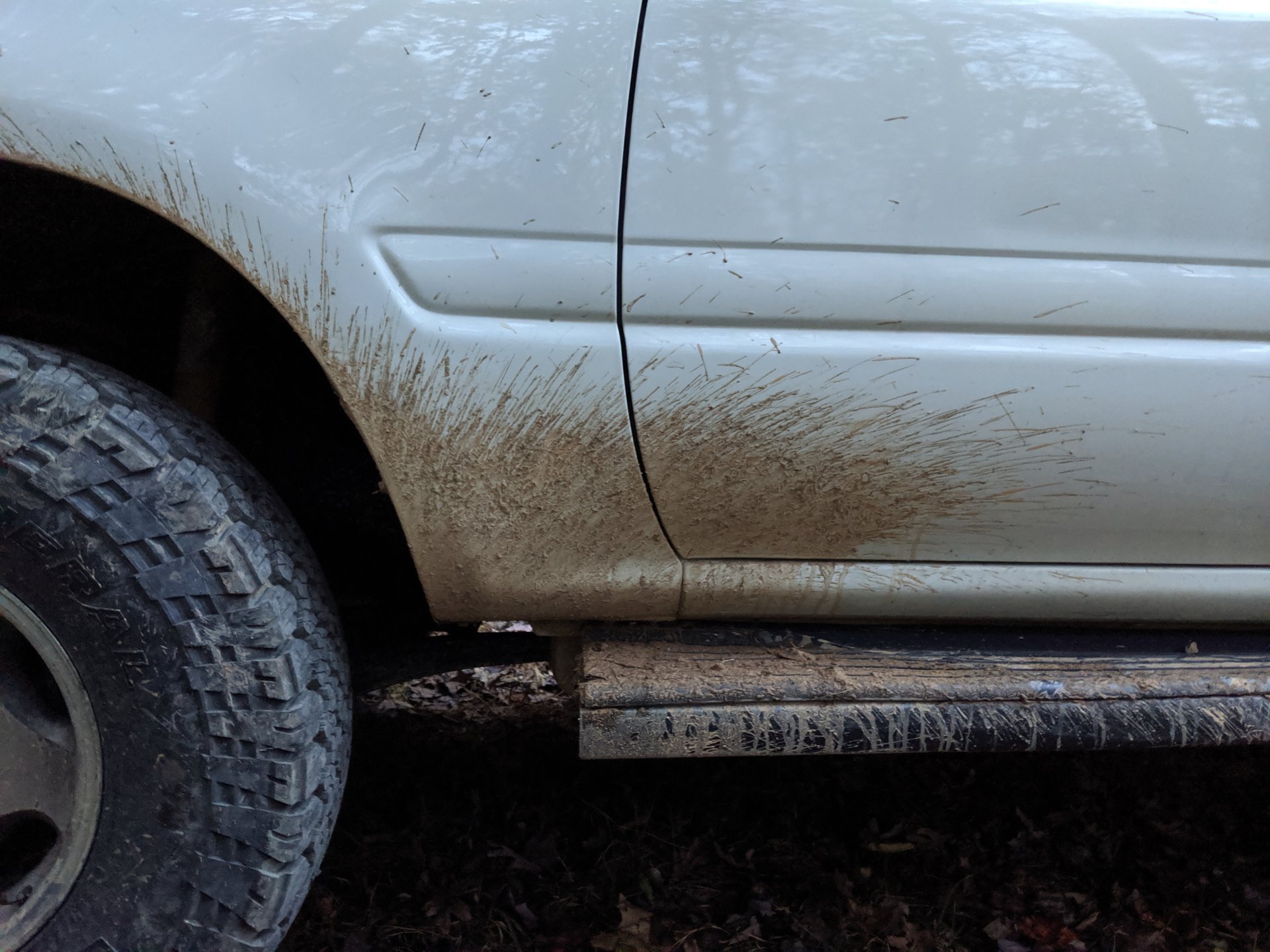 warming up the lunch leftovers (parked, just on residual heat): 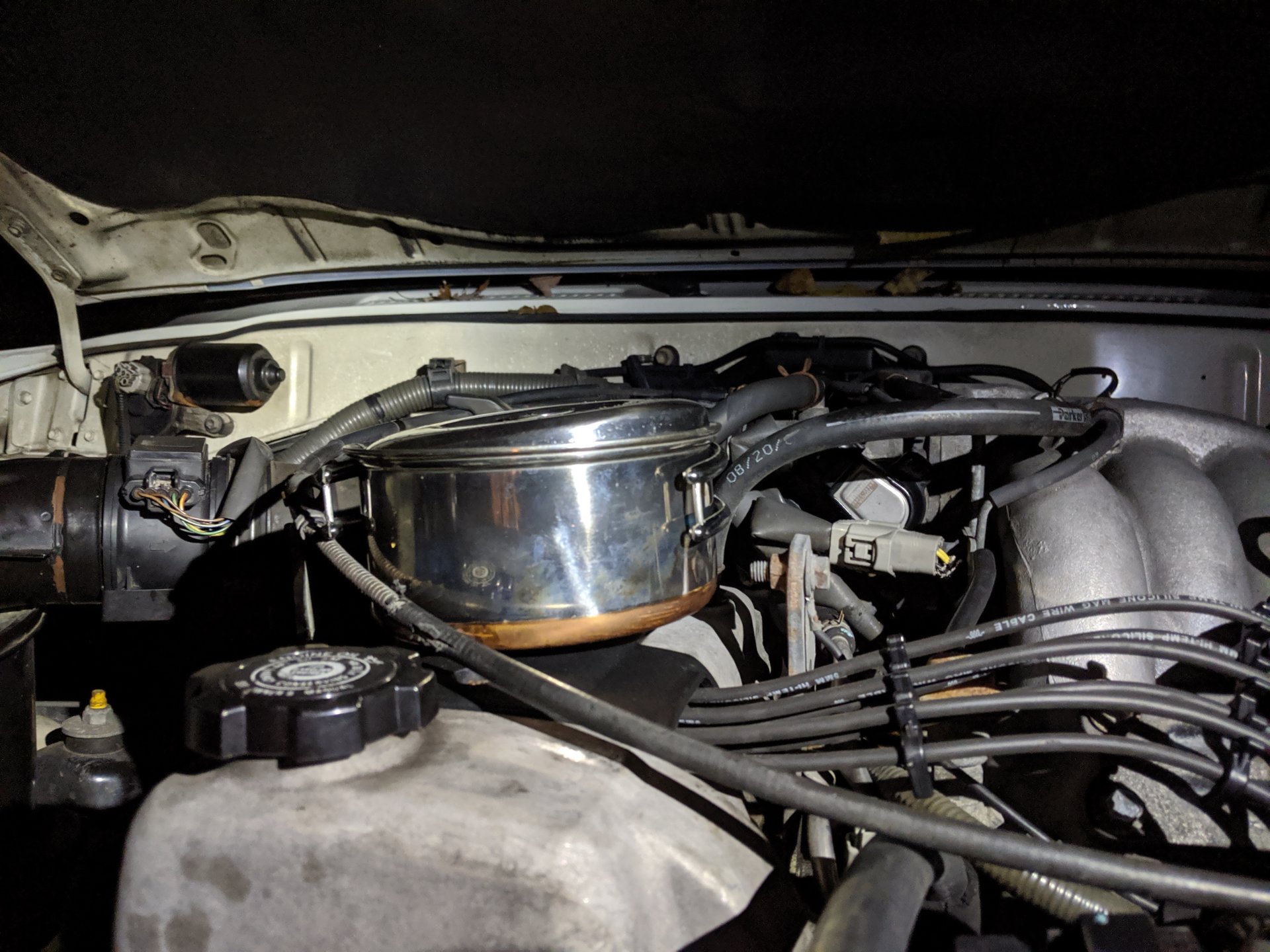 this boot was cracked, and now is leaking oil. it's also kinda loose, and the rest aren't much better, so it's time for replacement. i might just get an HD steering upgrade kit - partly because it'd save me from having to unscrew the old rod ends! 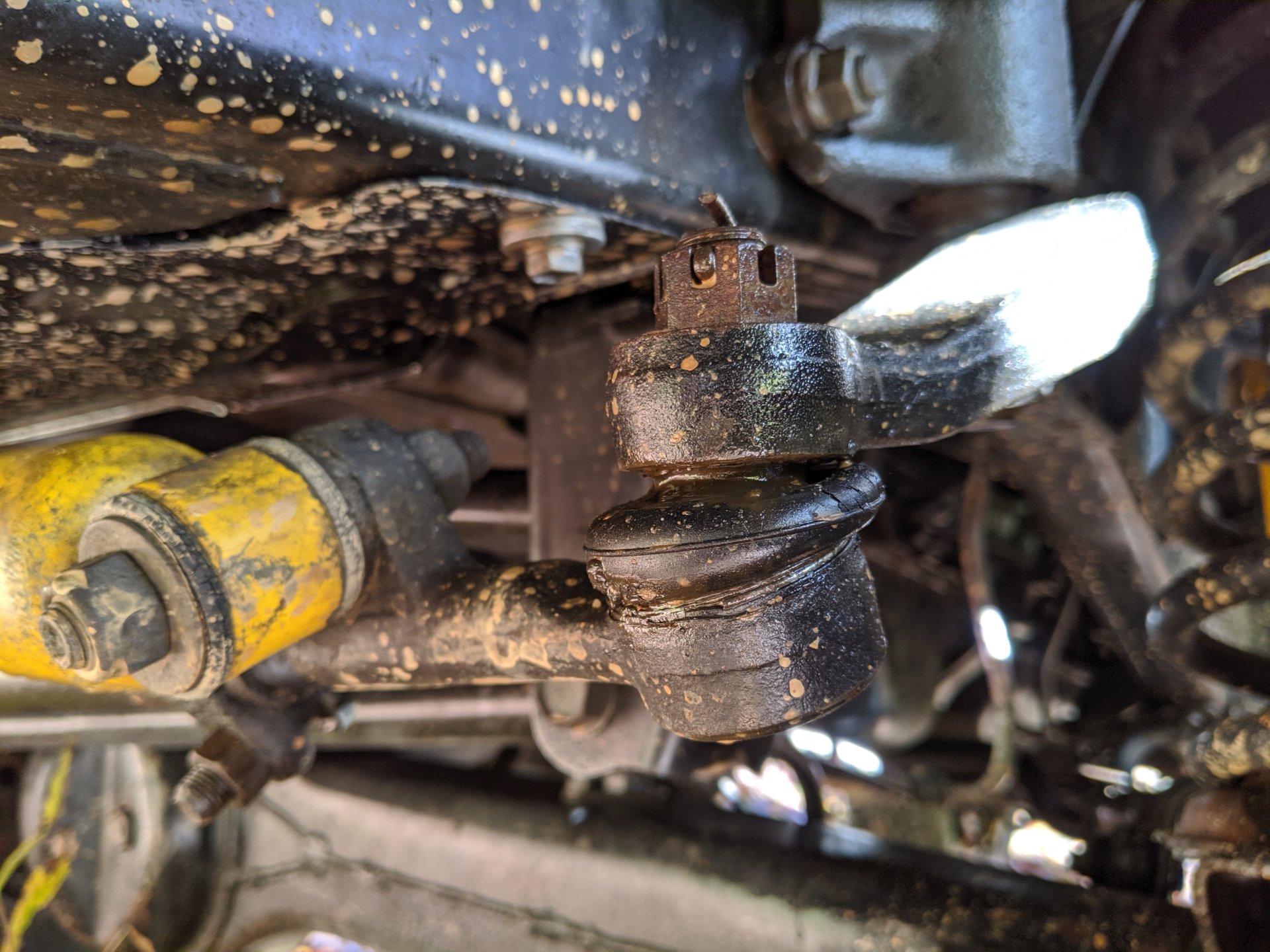 i was about to bail on the whole trip, between the dodgy forecast and uncertainty on where to go. i'm sure glad i didn't. 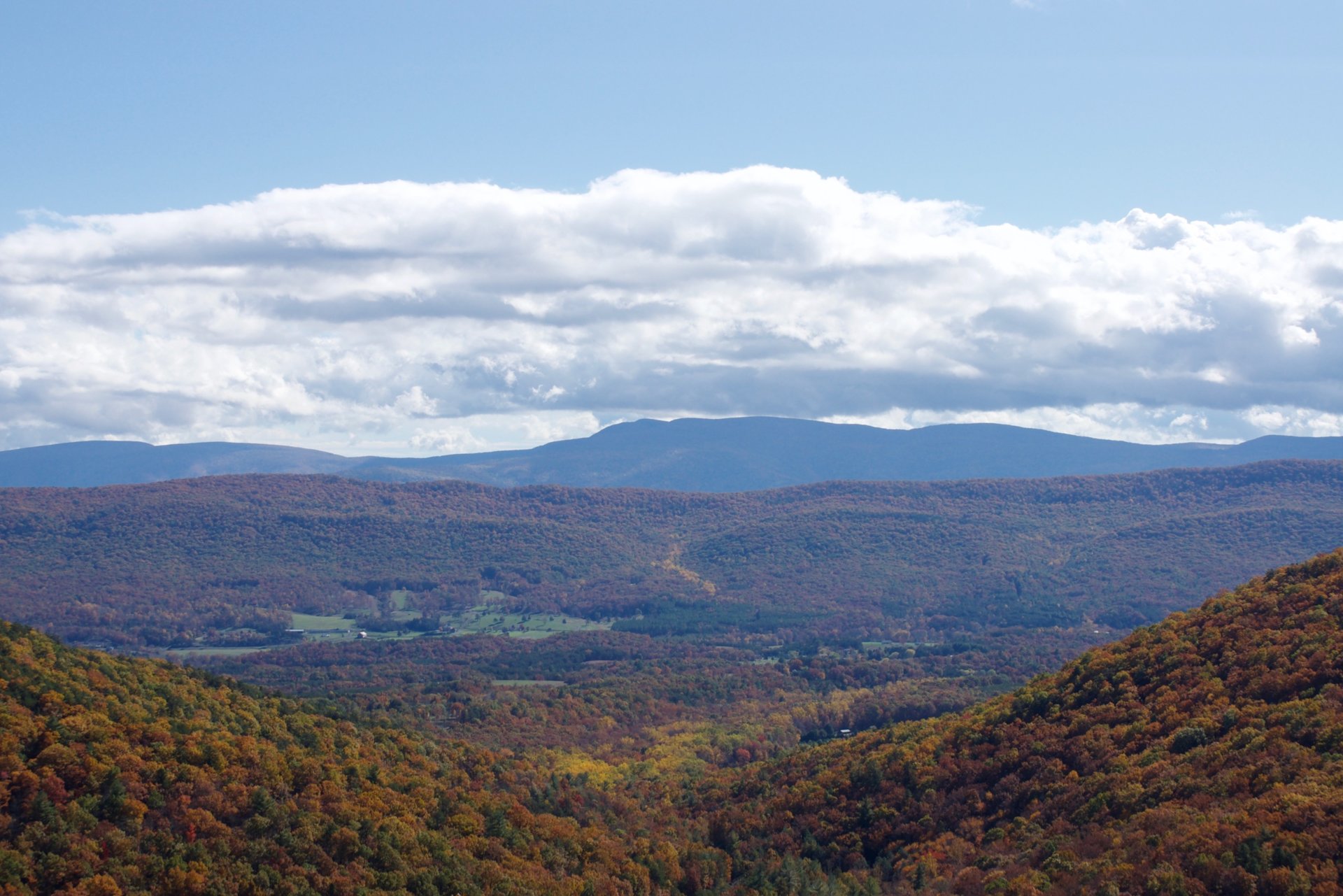 RiFF RaFF said:
I am soooooo glad I don't live in the People's Socialist Utopia of MerryLandistan!
Click to expand...


I’m going to use MerryLandistan for now on. My inspection experiences here have been similar. Plan on them failing me for a couple obvious things, go in and not get failed for those but instead a bunch of random crap that sometimes isn’t even on the checklist. Half the shops are just scamming you for business. But..... after it does pass you can let the car go into complete $hitbox status and drive it til the wheels fall off! I do appreciate not having to go in for inspection each year though
Last edited: Nov 2, 2019
You must log in or register to reply here.
Share:
Facebook Twitter Reddit Pinterest Tumblr WhatsApp Email Link

B
Who is in Richmond area?