Hello all! After my three-day battle with my sound upgrade, I figured some of you might appreciate some of the information I've discovered.

First off, this was attempted on a 2006 LX470 with Navigation and Mark Levinson audio. I researched this extensively before I dug in, but as it turns out, my research was wrong and/or incomplete. This post is an attempt to get this out there so the next guy can make a more informed decision than I did.

So, what I attempted to do was replace the stock ML amplifier with an aftermarket Alpine 5-channel amp. In the process, I also replaced the stock 6.5" woofer with the Skar Audio dual voice coil unit.

Based on my research, this seemed like it would be relatively straight forward. There are several wiring diagrams out there, and I have the FSM for a 2004 Land Cruiser. Several people have helpfully posted their experiences, so I figured I was educated enough to dive in.

I wasn't. What ensued was a three day battle with my truck in the Florida heat while I contemplated the poor decisions that led me to this point in life. If I had known going in what needed to be done, I probably would have done it again, but it would've taken me a day or less. Before you tackle this, be aware of the time and difficulty involved.

The problem is, in certain 100s (and I have no idea which ones!), the head unit in the dash provides two types of outputs: four channels of low-level audio output, and roughly six channels of digital output. All the 'advanced' functions of your audio system, such as volume, fade, balance, and tone, are commanded digitally by the head unit, and acted upon by the amplifier. This means, if you remove the ML amplifier from your system, you remove your ability to control your audio from the dashboard.

To be clear, the CD changer still works, the am/fm buttons, etc, all still function, but you get exactly 1 volume setting unless you install your own inline volume controller and knob.

What I would suggest (and what I did) is to wire in your new amplifier after the ML one. There are issues this way as well, but this allows you to keep an OEM like audio experience. I chose to cut a hole in the back of the storage compartment on the passenger side of the trunk and extend all the control signals to the new location, then run the OEM output back to the passenger seat, where I stashed the new amp. I think a better way would be to keep the ML amp in its OEM location and tap into the outputs there. Unfortunately, I'd already cut off the connectors from the wiring harness (like an idiot!), so I had to improvise.

One other gotcha: on my amp, there are four front channels, two rear channels, and two sub channels. Of the four front channels, two are low pass and two are high pass. The two rear channels and full frequency. Though there are two sub outputs, only one set of wires goes all the way back to the subwoofer itself. Keep all this in mind as you go through the process of wiring up your radio.

Here's the signal wire bundle. I used one set of CAT5 to carry the digital signals, and a separate CAT5 cable to carry the audio signals. Make sure you use a shielded cable, since the ML system uses a single 'negative' wire, rather than one for each signal: 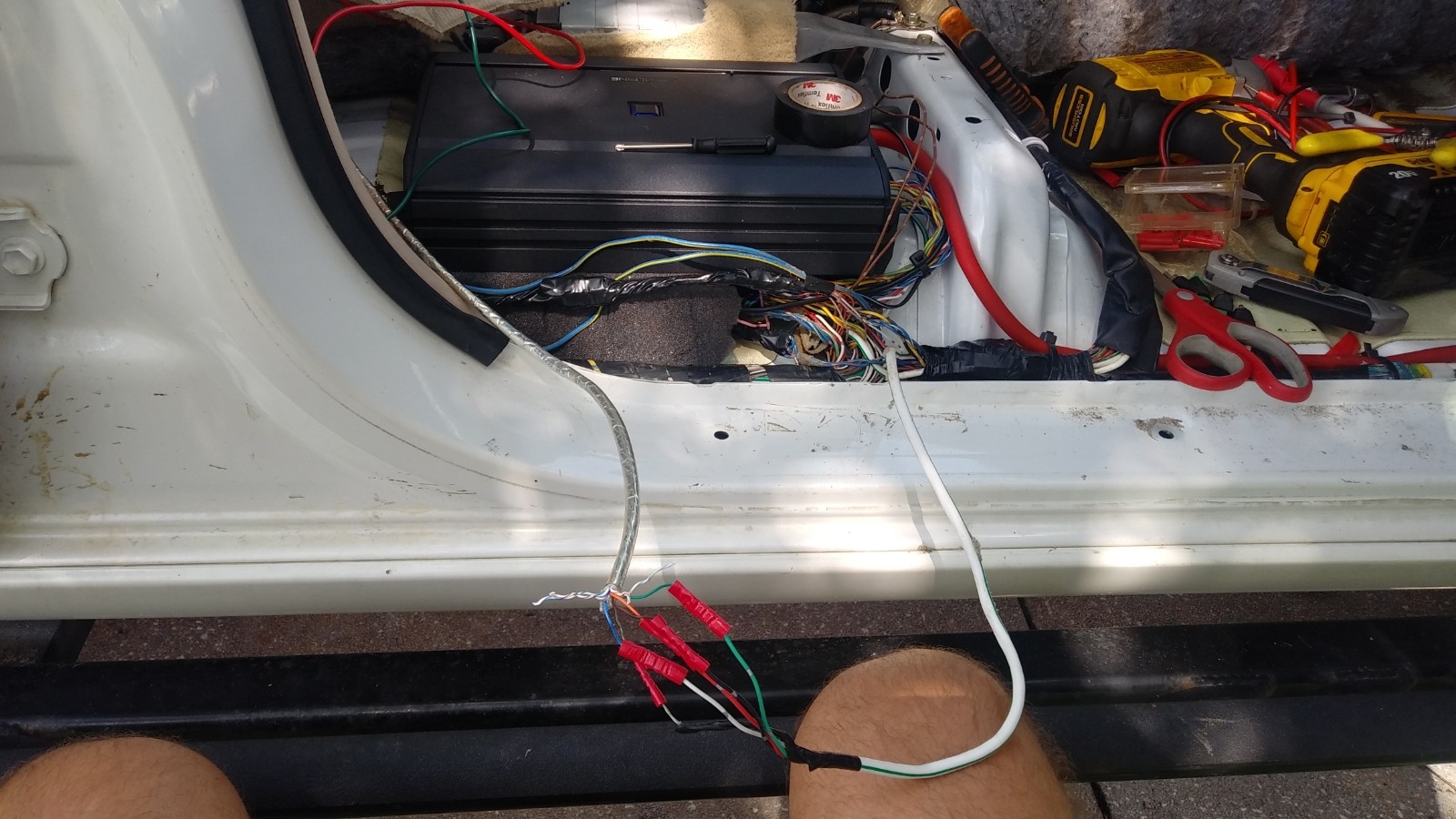 How I ran all the OEM amp wires: 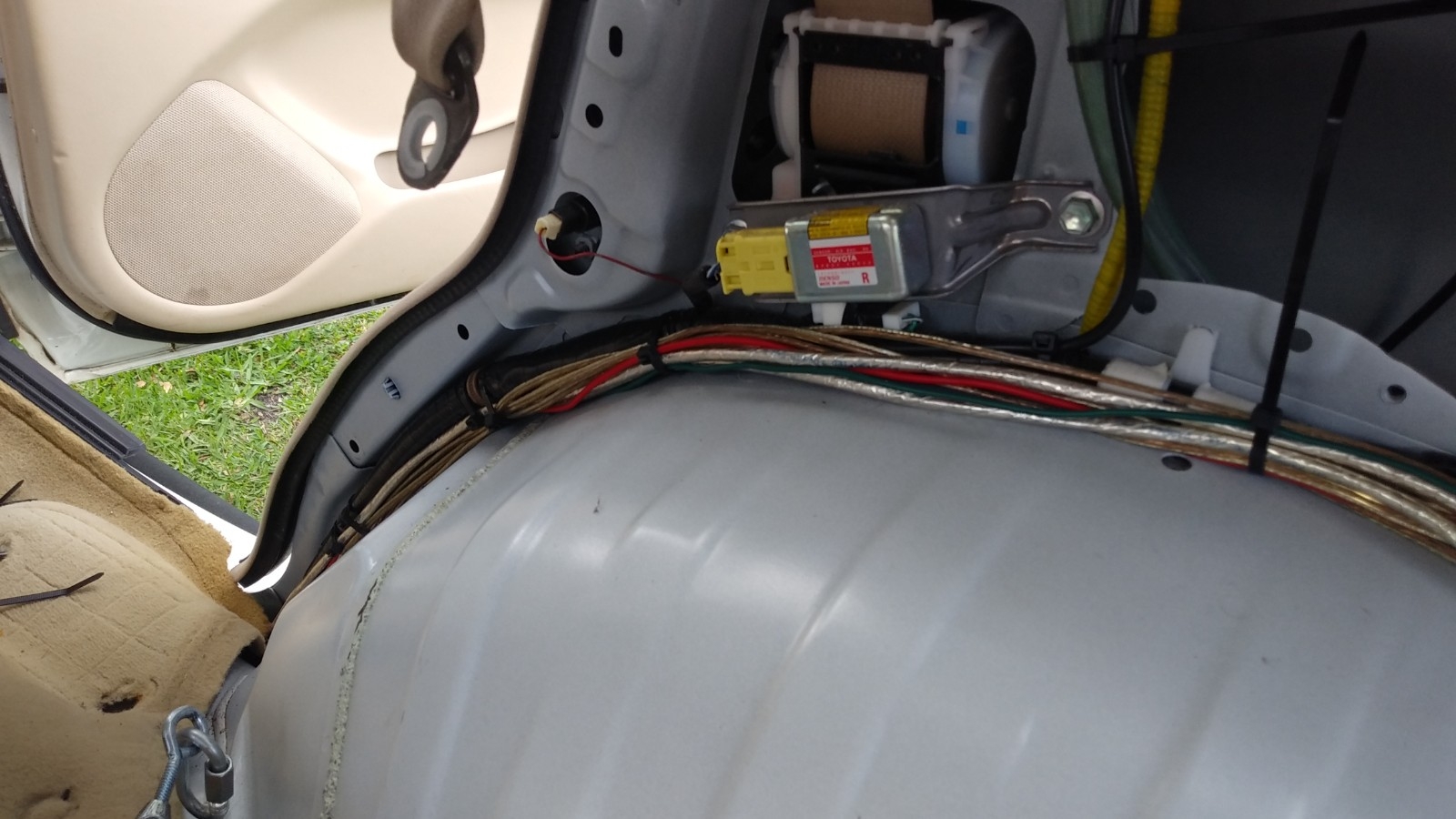 Hole for connectors for ML amp: 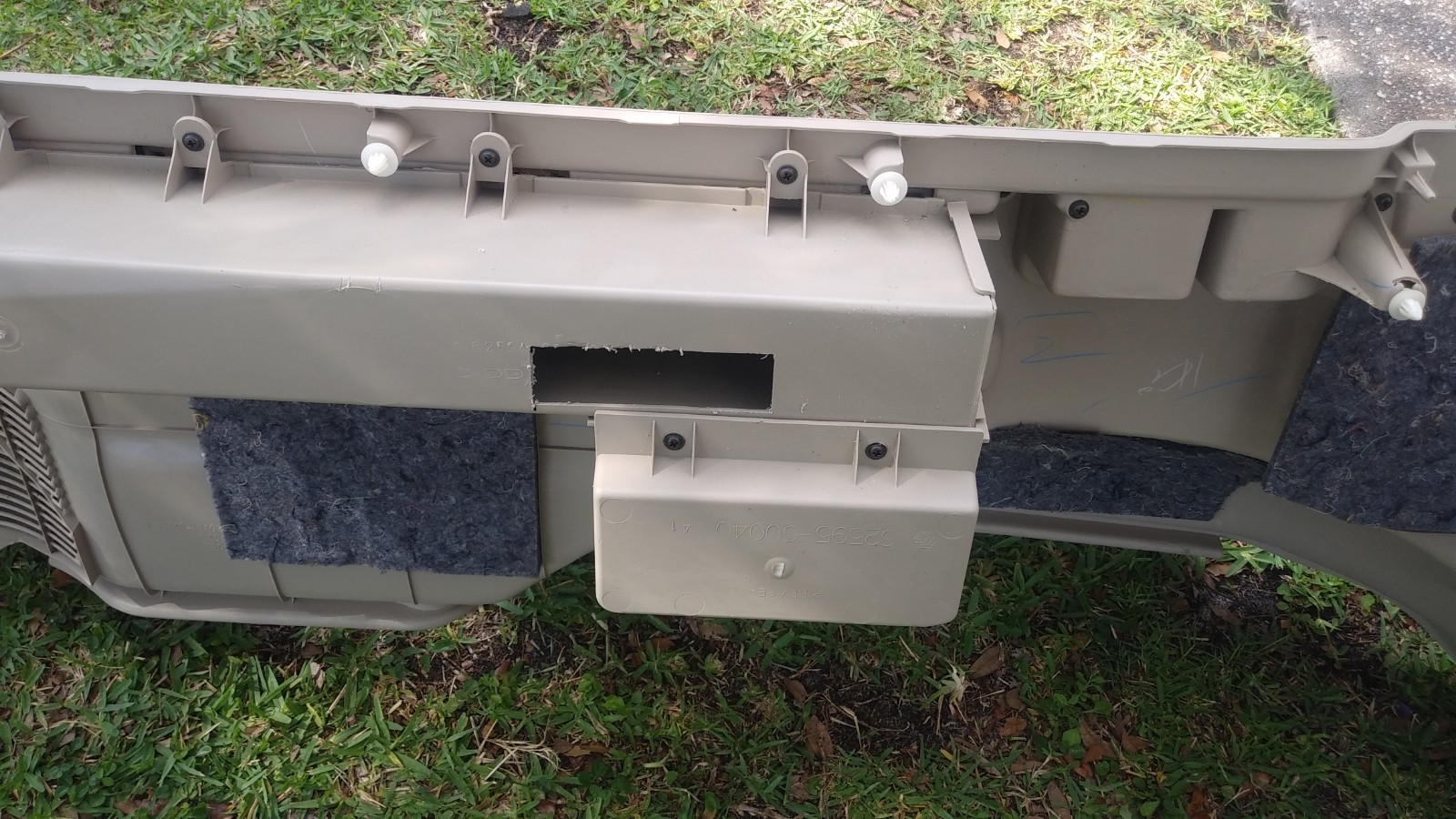 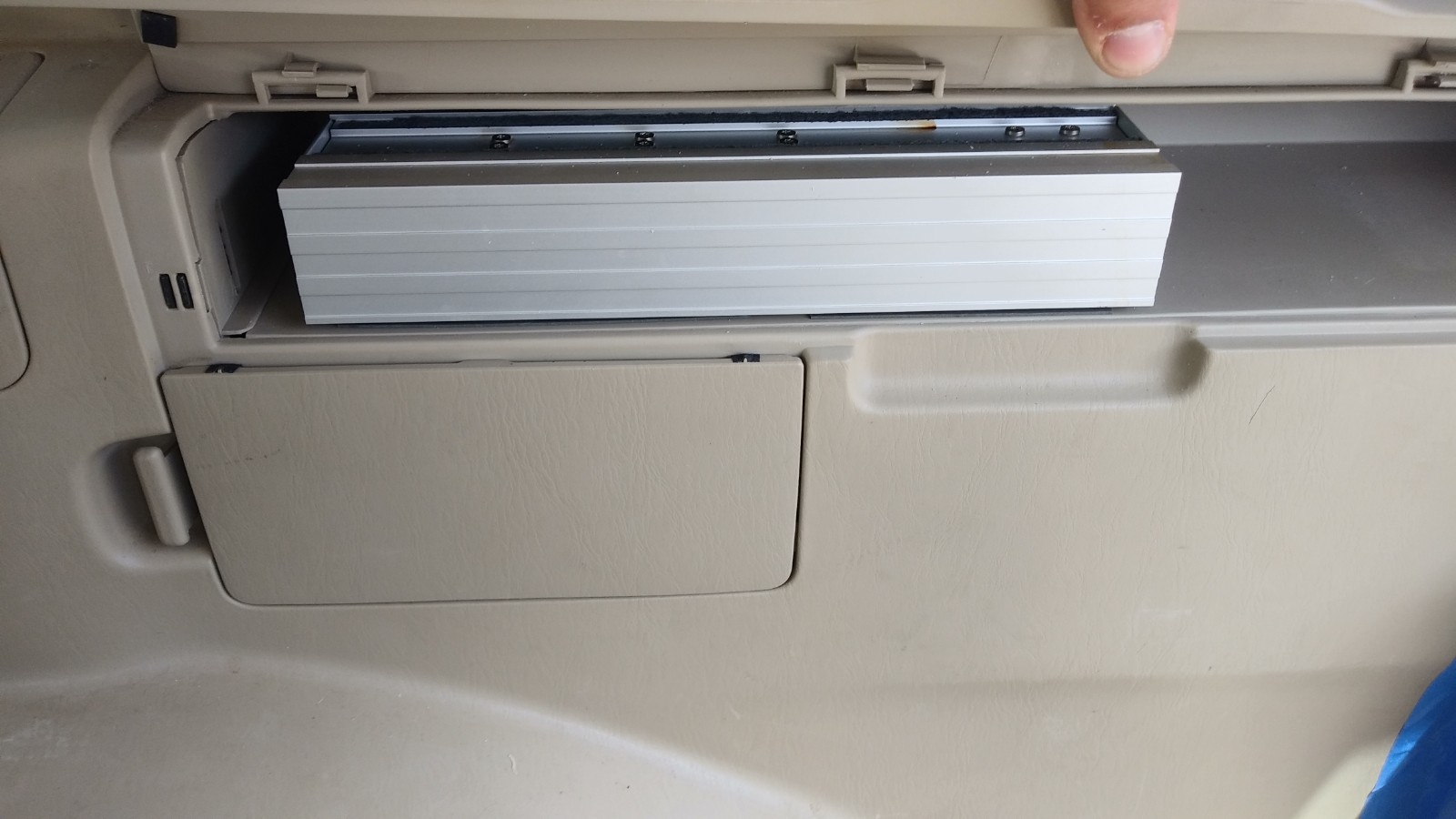 Alpine S-A55V 5-channel amp just barely fits after some modifications. I had to move the nav computer sideways a bit and trim the plastic carpet-shape-holder-thingy: 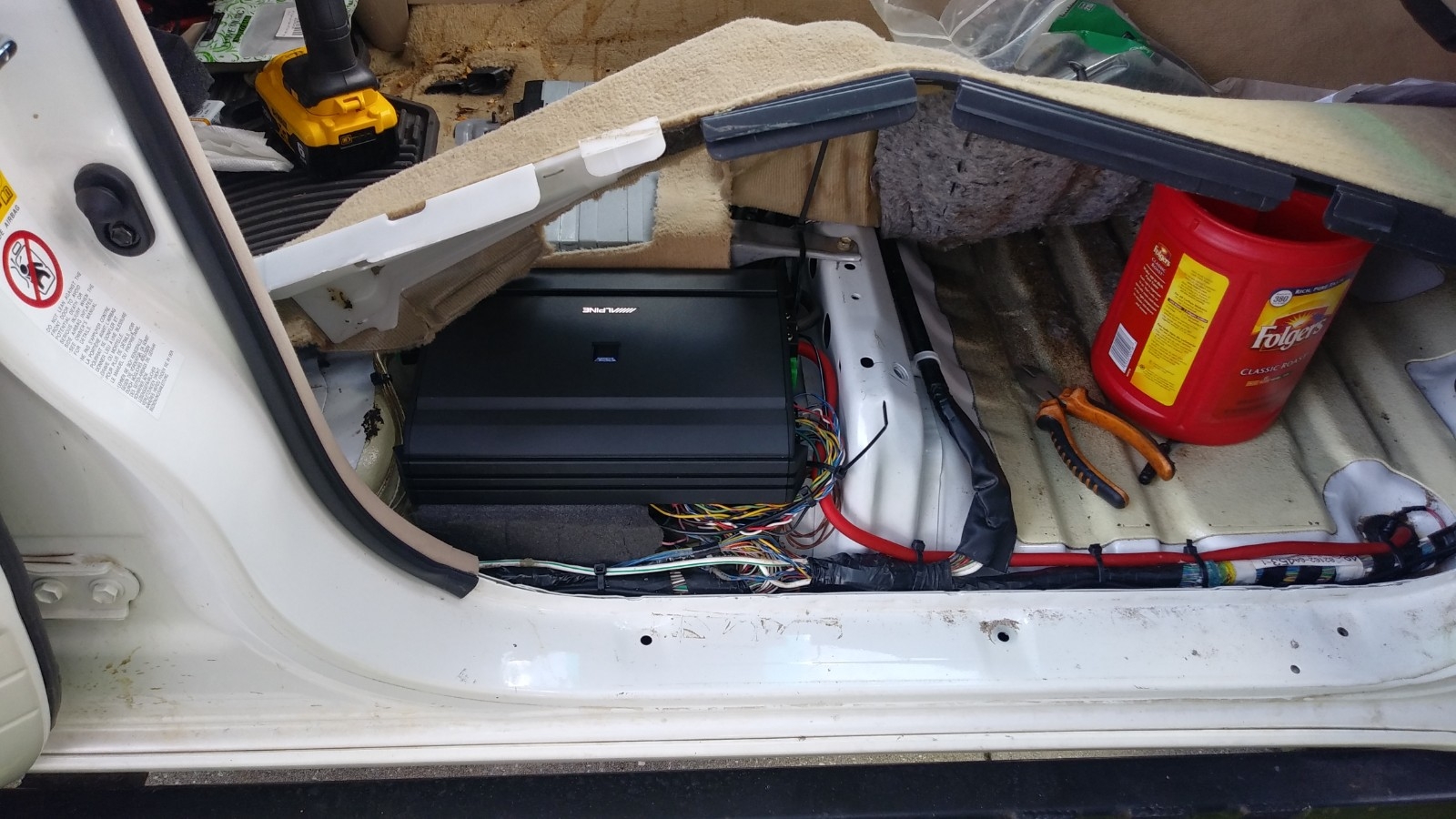 To summarize: this job is not for the faint of heart. It can be done, but it take a lot more thought and planning and work than I'd been led to believe from the other posts I've read about stereo installs. Hopefully this gets me through quite a number of years. I'd love to replace the headunit itself but I'm not really thrilled with any of the options currently available.

Hope this helps someone.
You must log in or register to reply here.

Starting upgrades on my 100 series