How do you get the Vaccum advance pot out of the dizzy???? (1 Viewer)

I looked at the diagrams online, read up on some searches and removed the set screw and this little bastard is not just sliding out like i expected it to. Am i missing a step or something simple?

This is on my 77 fj40 and after checking the mechanical advance it appears that the dizzy is stuck. The rotor will not turn either direction. I am needing to remove this so i can remove the points plate and free it up inside if possible.

Its the original dizzy to my truck i believe. its got points

Frustration is setting in.

OTher question, My rig is not desmogged, should i just bail on this dizzy and get a better or just a new one?
Josh Jones-Charlotte NC-GO WOLFPACK
77 Yellow FJ40 2.5OME, Custom Front/rear bumper ,33x10.5 BFG m/t's, Arb's F/R
'97 FZJ80 Collectors Ed. Factory Locked, sliders and rear swing out, F.O.R Gen 1 Springs, arb bull bar w/9500xdi,engel Fridge.146k on the clock

Heres where i am at now. I still cannot get the diaphragm off. Dont know why. I actually got it to turn a slight bit but then it froze again. Does it just slide out or screw out? I used some PB blaster in there overnight to see if that would help. not much luck
Now the actual dizzy is loosely spinning and i dont know why but i also dont see where to tighten it up.
Sorry, i am truly a 1 banana mechanic trying to learn my way thru this.
am i at a point where i should say screw it and get a new one? 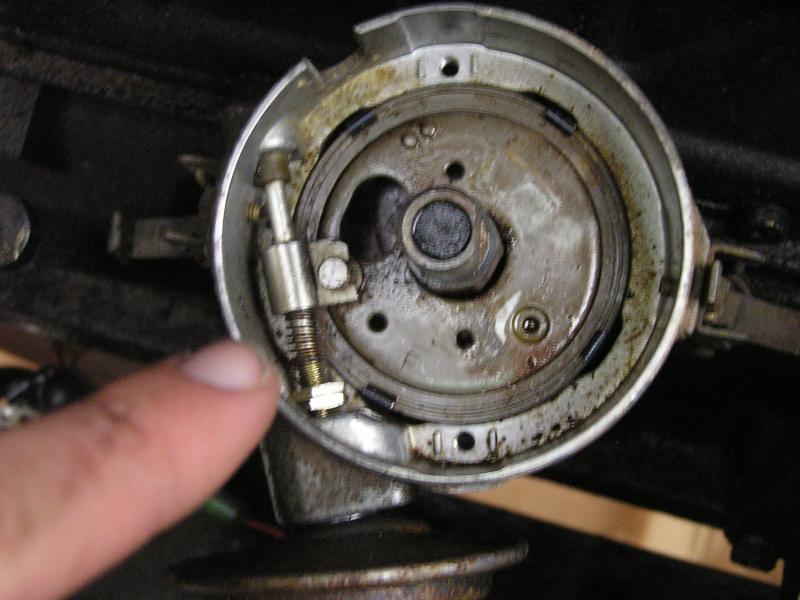 Alright, here you go. Had to get out to my own 77, and make sure I got it right for you...I took my vacuum diaphram away from the plate, and took some pictures for you. Seems I'm not a very good communicator, but pictures sure help...

Remove the screw from the advance diaphram (I know...you've done that)

Give it a jiggle to loosen it from the port it's sticking through. Don't worry about the nuts on there, they will go through the port.

Gently pull the diaphram assembly out of the distributor cup. The plate will rotate as the circlip is still attached to the post on the plate.

Keep pulling until the circlip is free of the post on the plate.

Turn the circlip up 90 degrees to allow clearance for the plate to be lifted out.

Remove the screws at the 12 and 6 o'clock positions to allow the plate to be removed.

When returning the screws and clips at 12 and 6, look at the small piece of metal that is the clip...If I recall...they have a small recess on one side to allow the plate to freely move under the clips. You don't want friction from those clips holding the plate after you have freed it up and got it moving again!! 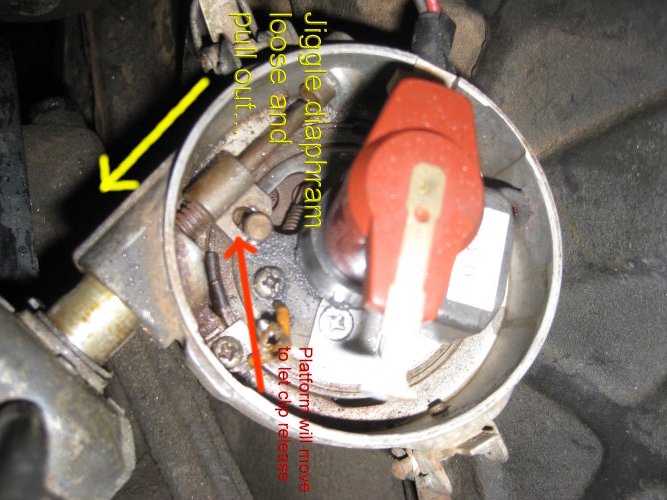 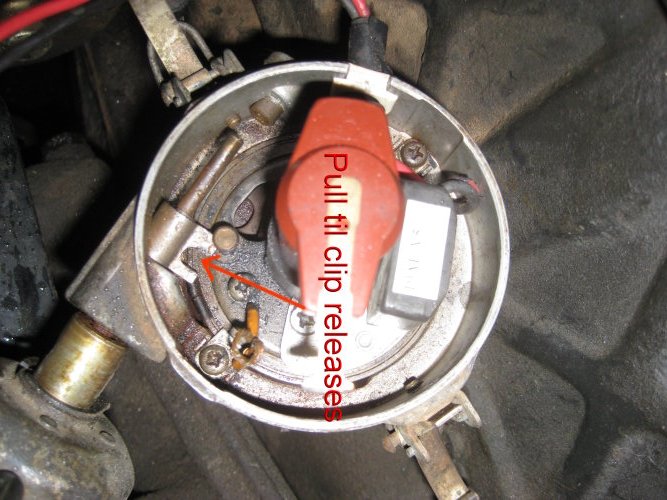 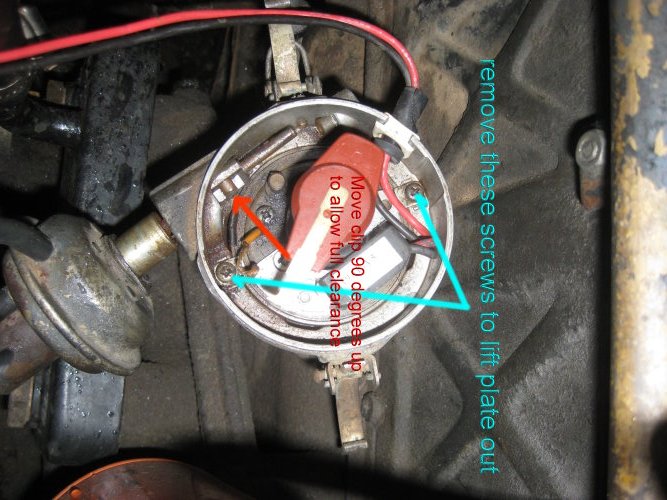 nice pics! that was perfect! I got it. Turns out that i was battling with 30 years of rust holding the pot in place. PB blaster in there for 3 days finally broke it loose and i was able to turn the diaphragm and slide it out. Got the plate off now and i am looking at the insides. I still cannot turn the rotor more than about 1/8" at most Clockwise. What do i need to free up? 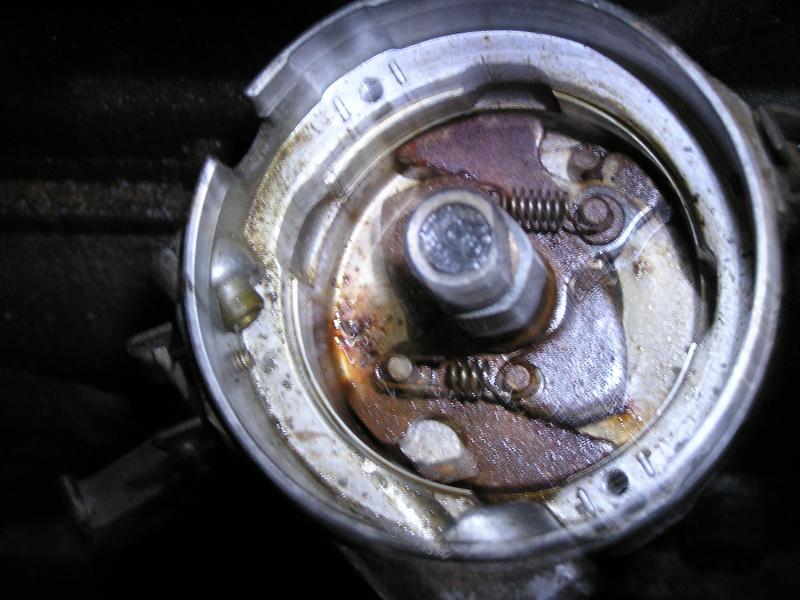 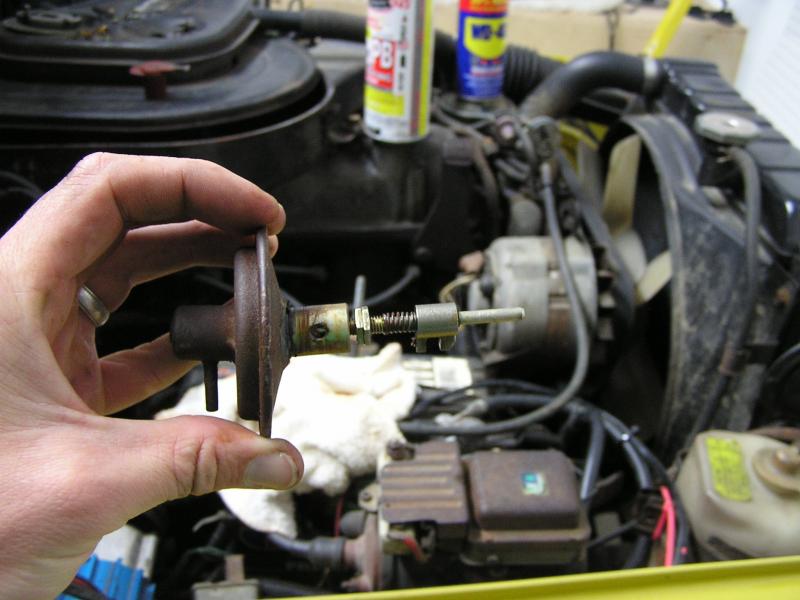 Look at the bottom of the plate...there is a ring of bearings under it. get some oil in there and start freeing it up. Might take a while after 30 years of build up. Looks like the weights in your second picture are a bit messed up. Make sure those move freely, and the springs work to retract them.

You aren't trying to free up your rotor, but the bearings under your plate, and the weights to get the vacuum advance working...
Last edited: May 18, 2011
1977 FJ40 "Stella" California emissions 2F engine, stock except with Pertronix, and Flamethrower. Saginaw steering, rear Aussie locker, rear disc brake conversion. 32X11.5X15 BFG KO/2's.
1975 FJ40 Sold
1992 HDJ81 RHD JDM Turbo Diesel "Blanche"
You're never too old to learn something stupid.

If I like my Constitution, can I keep it?

Yeah, why is this dissy in the engine?

It should be wrapped in a rag and clamped in the vise for service.

Test the vac advancer, see if it still holds vacuum and retracts. If it does, then proceed w/ servicing per FSM. If vac advancer is dead, then seek out a different dissy, 'cause there are no service parts available for the 75-80 dissy.
Thanks,
Jim Chenoweth KE8GEF
Underhood Janitor, cleaning up other people's

Wouldn't a new side plate and a FJ60 Dizzy be the way to go ?
A hundred years from now it will not matter what my bank account was, the sort of house I lived in, or the kind of car I drove. But the world may be different, because I was important in the life of a child.

This originally started as this thread

By keeping the dizzy in the engine, he doesn't have to worry about timing, or stabbing the distributor. He is a self admitted

mechanic, who's pockets want a reprieve from buying new parts. After all...I think learning and working on our rigs is enhanced when we can actually repair, or restore a part instead of replacing everything. Saving a buck doesn't hurt either.

Thanks for all your help guys. I ended up pulling the dizzy out and as someone mentioned above i did not get it back in correctly and now i cannot get the cruiser to fire up. I have points gapped correctly i got it back where i believed that it was but it will not turn over. Sputters for a second but essentially nothing.

TIming Advance - How much is too much?

Lowering the fill point to not overfill the tank- How do I do that?