As we all do, I was lurking on Facebook/Craigslist/OfferUp while on vacation and I found what looked to be a solid, single locked 80 series in Missouri with 300,000 miles. The previous owner was preparing for a move the next day so I high tailed it over there to take a look. I decided it was good enough to make an offer based on a quick test drive and look around. I could hear the knuckles in need of attention while engaged in 4WD and saw a few outstanding issues straight in common areas, but no rust. I have no records to work from, so I'm flying blind with maintenance. The plan is to tackle basic maintenance, some while-you're-in-there items, and anything glaring we find along the way. I also noticed the radiator was leaking water once the truck shut off, so I'll likely be replacing the cooling system because who knows when that was touched. I did send off an oil sample to Blackstone and everything came back with a clear bill of health which is encouraging. The plan is to use OEM parts on everything I can get my hands on. As for the truck, I'd like to remove the flares, install some factory steel wheels, and find a cloth interior to build a simple truck for camping and wheeling. I've been using @PNWTreeOctopus 's thread as inspiration for a Pre-OBD 80 as well. Here's the list so far.

This truck will join my 1988 FJ62 once finished. I've always liked the 80 series platform and I'm excited to dig in. Tires will be the first upgrade, but not much else is in the budget. Now for some photos. If I missed anything, please feel free to let me know. I've been spending more time in the 80 tech section trying to figure out what I need to do. 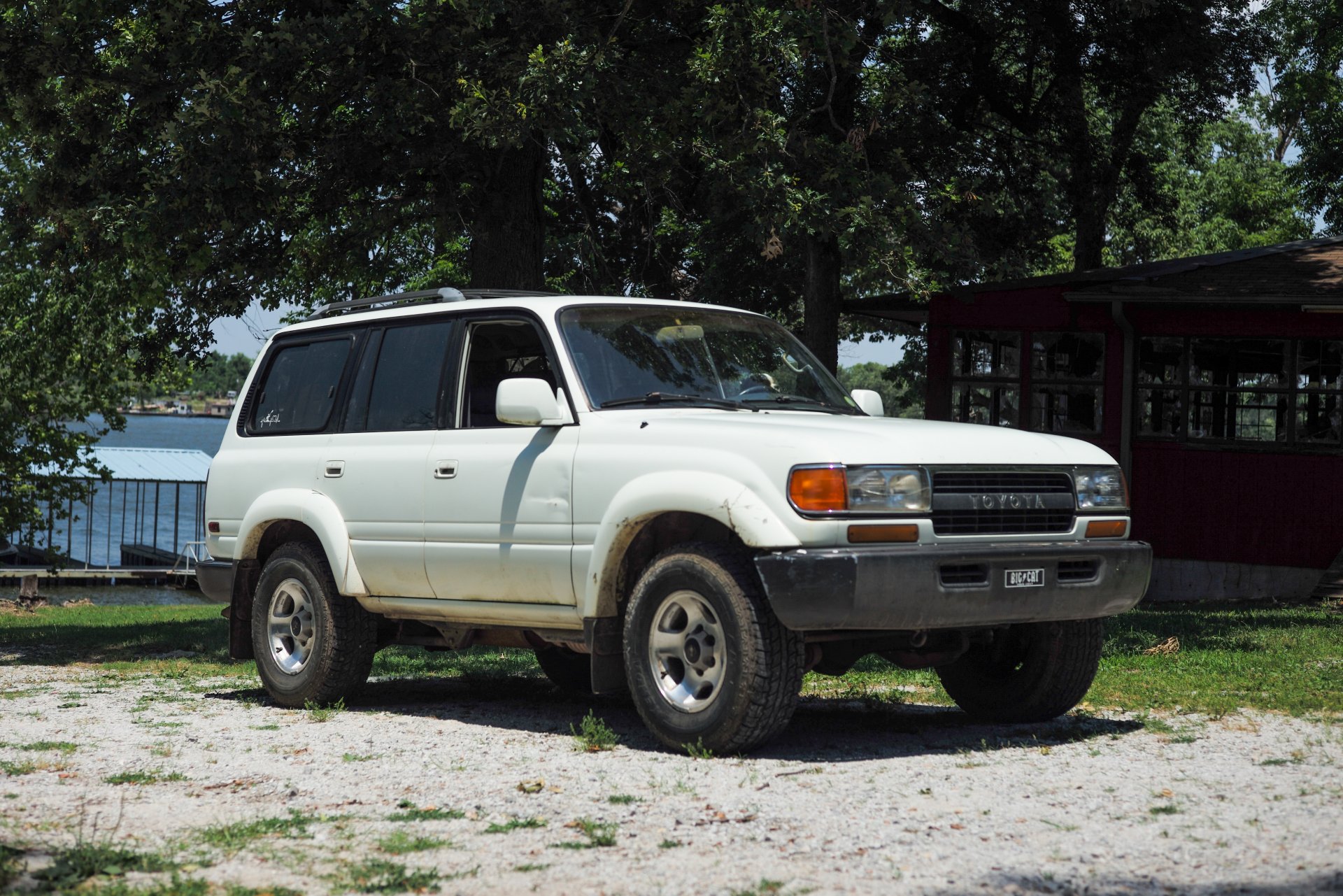 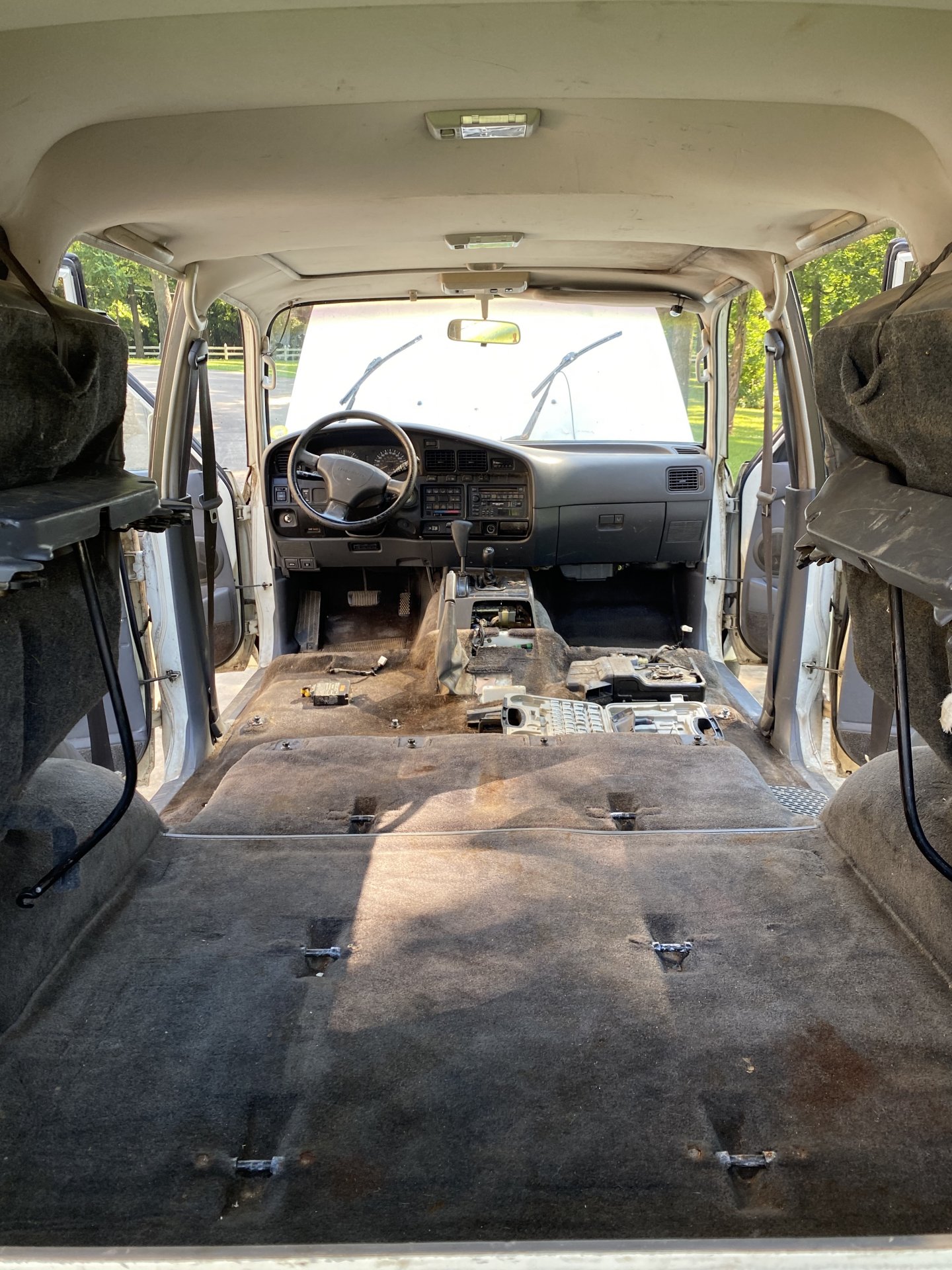 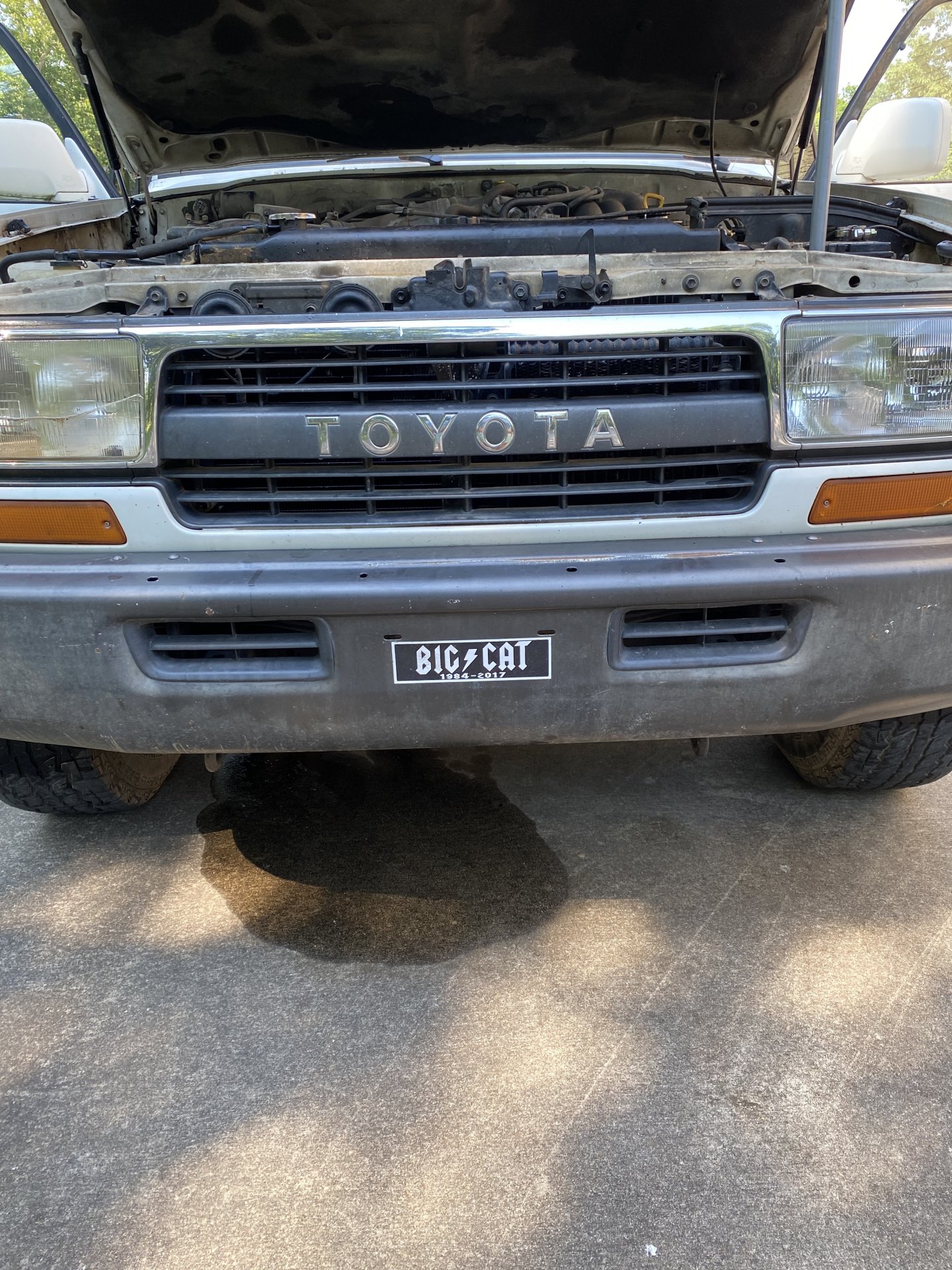 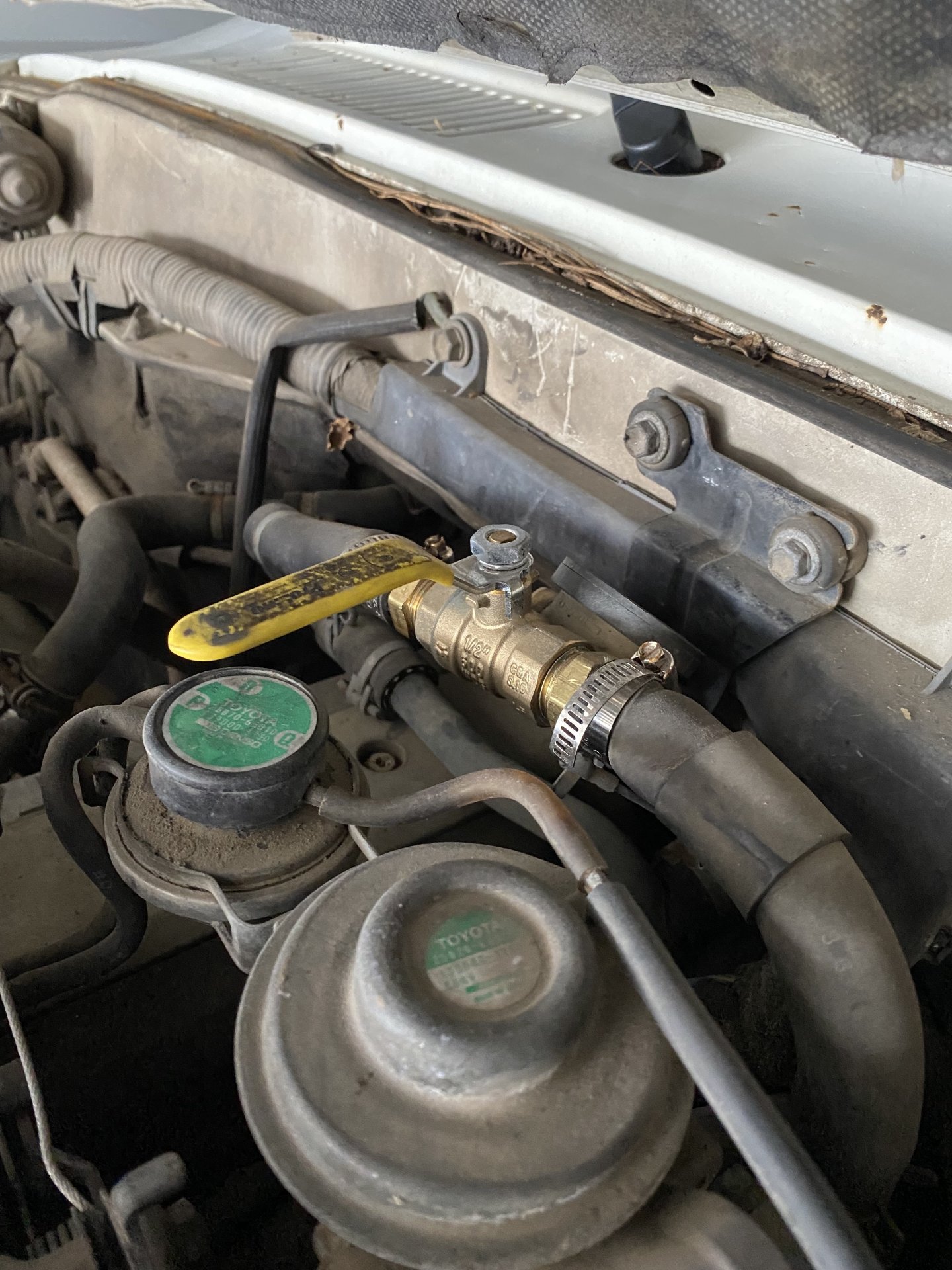 Nice 80, welcome. That’s some intriguing shade tree mechanic stuff going on in the engine bay. I’d be leery and check everything with a fine-toothed comb.

@PNWTreeOctopus is a great foundation to follow. Looking forward to your journey.

FMC80 said:
Nice 80, welcome. That’s some intriguing shade tree mechanic stuff going on in the engine bay. I’d be leery and check everything with a fine-toothed comb.

If that’s the “plumbing” do check the electrical carefully! Dont want to see a burning 80 on your thread!

Hokierig said:
I've been using @PNWTreeOctopus 's thread as inspiration for a Pre-OBD 80 as well.
Click to expand...

Well hopefully you can move at a faster pace than I have!

Are you keeping the 2nd row seats? Was it cloth to begin with? I’m excited to see your rig saved from PO questionable maintenance. The ball valve heater “switch” would be so mad max if it was inside the rig!

PNWTreeOctopus said:
Well hopefully you can move at a faster pace than I have!

Are you keeping the 2nd row seats? Was it cloth to begin with? I’m excited to see your rig saved from PO questionable maintenance. The ball valve heater “switch” would be so mad max if it was inside the rig!

I’m keeping the second row, but replacing with cloth when I can find a full set. The truck originally came with gray leather, but I’ve always liked the cloth better and the current seats are roached. Call it a poverty pack homage if you will.

FMC80 said:
Nice 80, welcome. That’s some intriguing shade tree mechanic stuff going on in the engine bay. I’d be leery and check everything with a fine-toothed comb.


Yes the heater valve switch gave me a bit of a laugh. That’s what I’m basing my level of trust for the PO on.

Picked up a cloth second row locally. Now hunting for front cloth seats if anyone has a set or a lead on a set. @slow95z do you happen to have any cloth fronts in good shape?

If I can’t find any, I’m leaning towards finding some Recaro L series seats in gray. 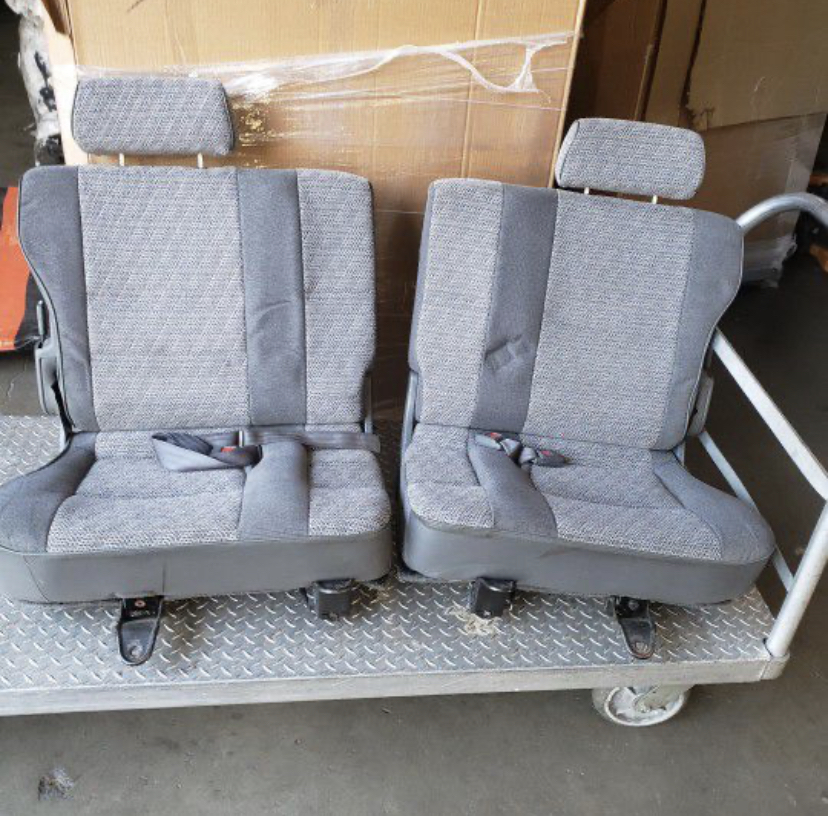 Not that I am looking to sell, sorry man. Things are hard to find and I am now hanging on to every set I get in. The local crew has dibs on the next 3 sets I come across

slow95z said:
Not that I am looking to sell, sorry man. Things are hard to find and I am now hanging on to every set I get in. The local crew has dibs on the next 3 sets I come across
Click to expand...

My brother @Hokie LX and I finally took some time to dig into the project. I ordered a heap of OEM parts from various sources. We had an ambitious schedule and a less than ideal workspace for the project. The plan was to get as much done as possible in the 3 days before hitting the road from Oklahoma to California. Up to this point I'd only driven the truck 3 miles. We had a craftsman 200-something-piece tool set, a floor jack, some jack stands, and a bag of screwdrivers, specialty tools and a new Milwaukee power ratchet. Love that thing. Here's what we got done;

We didn't get to the ATF flush, fuel filter replacement, oil pump seal, or the front shocks because of time. The old aftermarket shock retainer washers didn't fit my OEM units so they didn't go on. I did some searching and it seems like they're a common and expensive remedy.

We hit the road from Oklahoma City to Amarillo to get an initial test drive in before the long haul to California. We learned a lot about the truck - what worked, what didn't, what was missing, and what needed addressed. We shoved some shop towels in the mirrors to stop the wobbling which did an amazing job, but I'll definitely need to find a long term solution. We also decided to tear into the knuckles since they were leaking really badly. The whole trip was a struggle of not having the right tools or a full garage to solve problems with so we took plenty of trips to the parts and hardware stores in between work.

We spent an extra day in Amarillo to wrap up the knuckle job and fit some fresh brakes on the front. I got hung up with the OEM axle seal retainer spring which popped out while I had a shop towel stopping the drainage. That was a demoralizing segment of the job, but I was able to wrangle it back into place without removing the seal and potentially damaging the only good one we had with us. My brother was fighting two broken knuckle studs which delayed his progress as well. Once we hit the road, things went smoothly enough. Our plan was to trek from Amarillo to Los Angeles in one straight shot (1,100 miles/16 hours). We made smashing progress until Prescott, AZ where I learned about the caliper bolts tendency to uninstall themselves. The bolts backed out, tossed the caliper off the rotor, and took the dust shield and brake line with it. Luckily we heard the bolts jump out and pulled off the highway just in time for the front wheel to seize.

We were able to get a AAA tow to Phoenix where an AutoZone had everything we needed to fix the issue. After a 4 hour parking lot session to swap all the brake components, double check torque settings, assess damage and clean up we were back on the road. At this point, it had felt like two different days. We hit the road once again and made it to Los Angeles after 26 hours on the road.

Here's what I learned about the truck so far:

- We think it was a kayak hauler based on the stickers, tow hitch, heavy usage, and neglect
- This truck has been neglected and the car it did receive was from some shade tree mechanic
- It's a strong runner with a lot of potential
- The two driver side doors have been repainted with clear coat at some point
- Someone ripped off the driver side visor for some reason
- Both antennas are ripped off
- I have rear drum brakes, which I believe means semi-float rear axle. Was hoping for discs, but alas 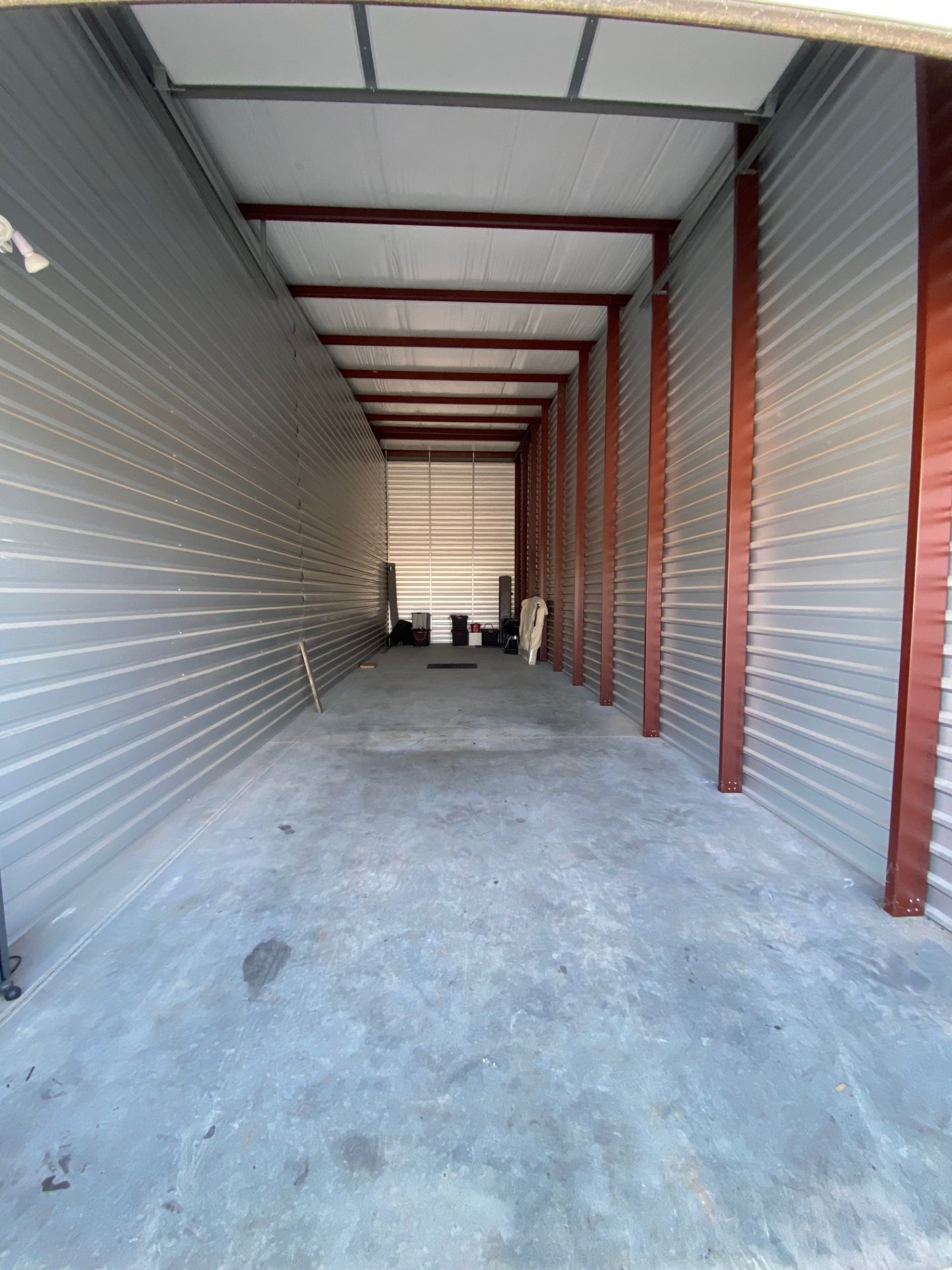 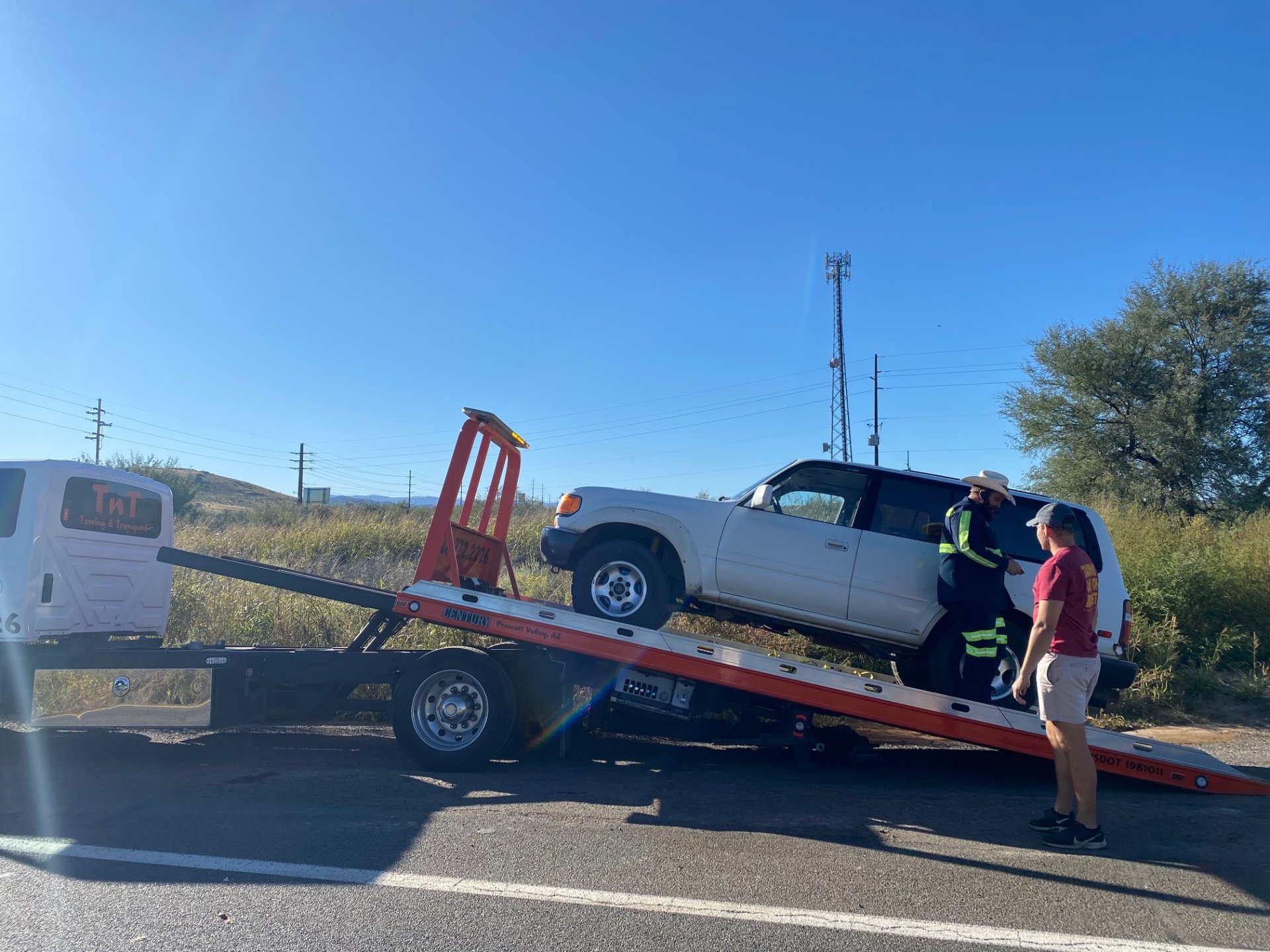 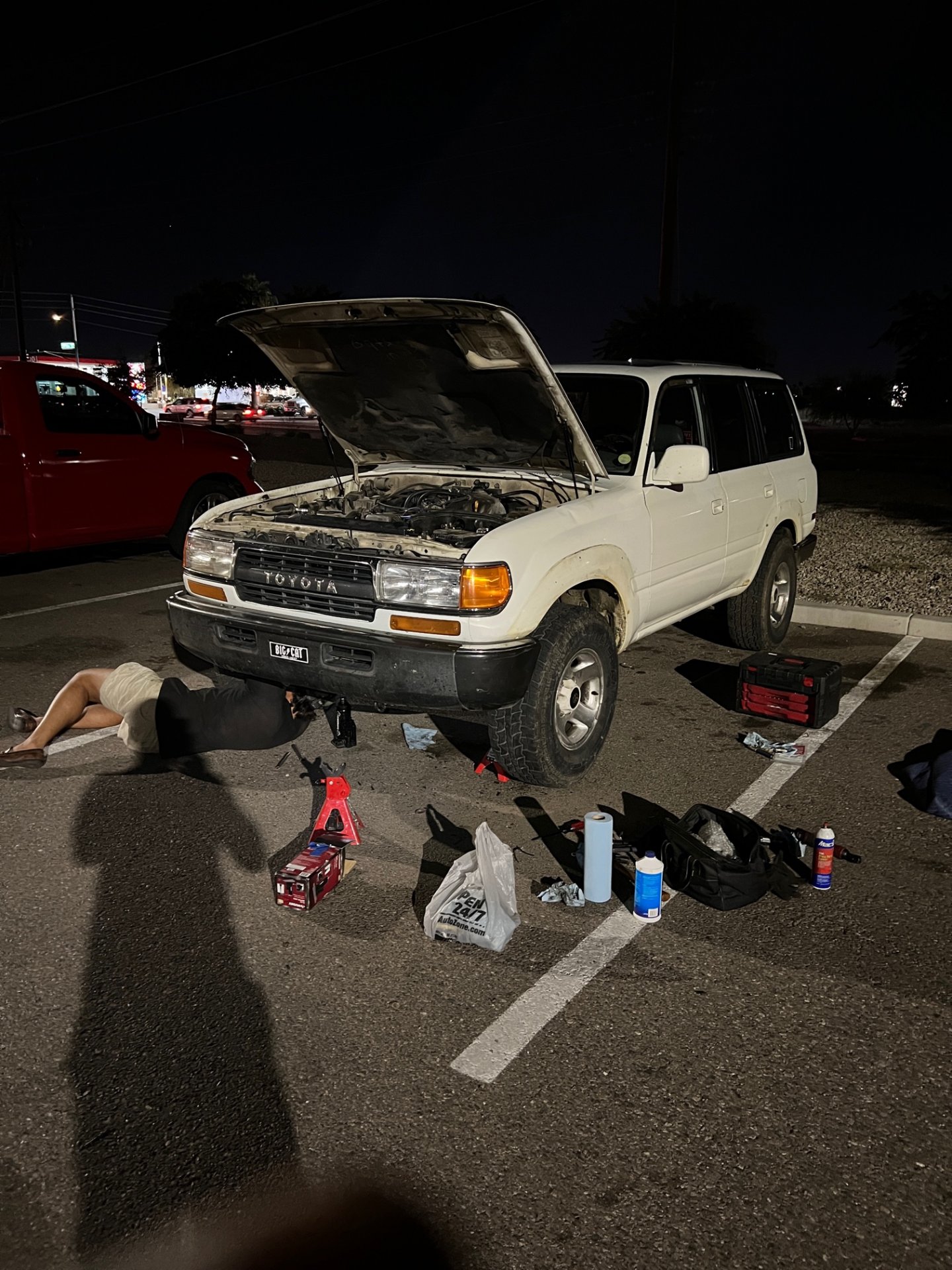 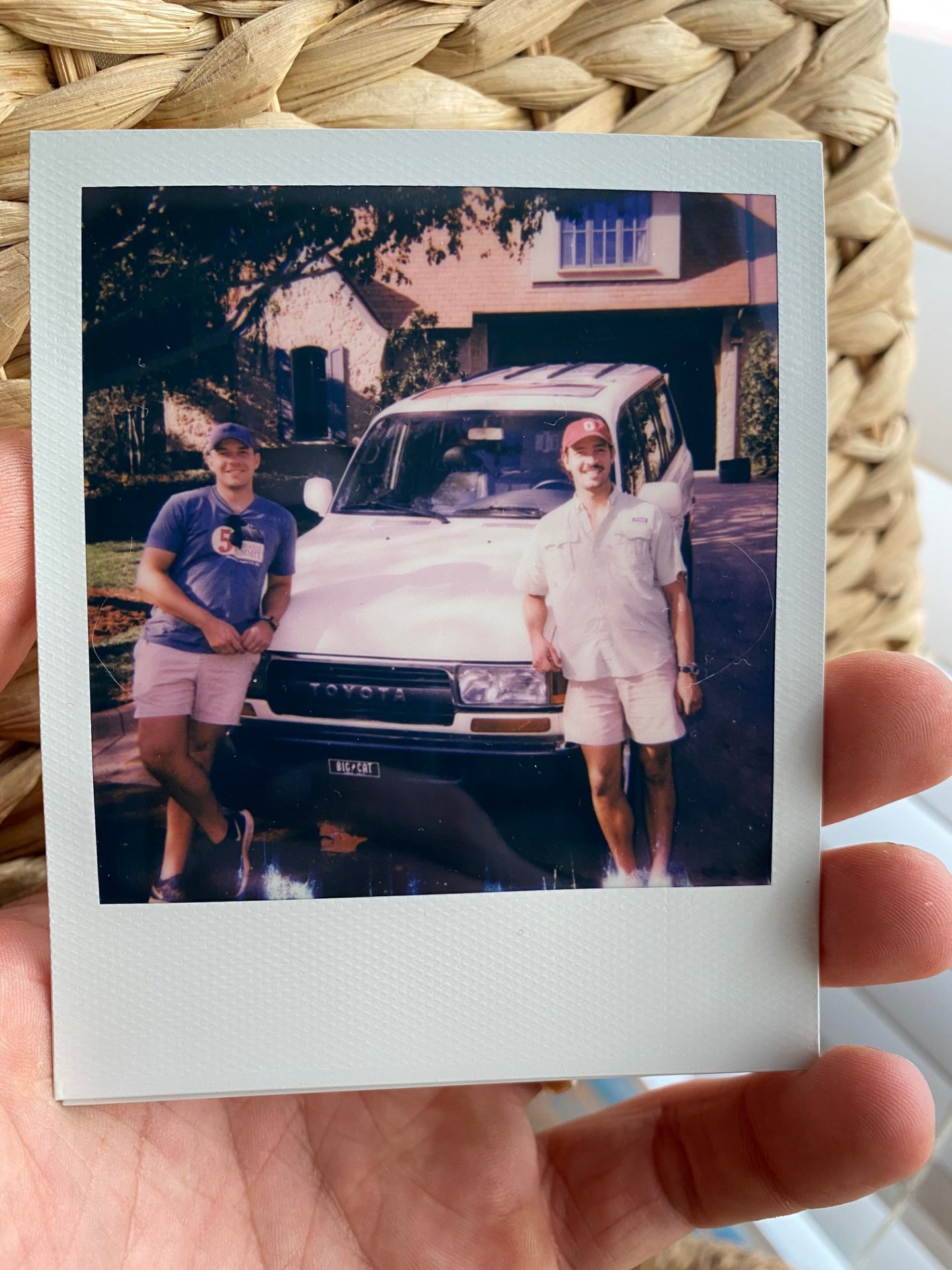 Once getting back to LA, I was eager to mount and install my new OEM steelies I picked up from @PDBJ70 and throw some fresh rubber on. Now that the flares had been removed (pending body filling and paint) I needed some skinnier tires to match the look I was after. I opted for the Cooper STT Pros in 255/85/16 measuring roughly 33" x 10" which I loved the look of. The options for this tire size were limited to mostly mud tires which I didn't want for the type of driving I do, so the Coopers were the only option I considered for an AT/MT middle ground.

Here's the before and after 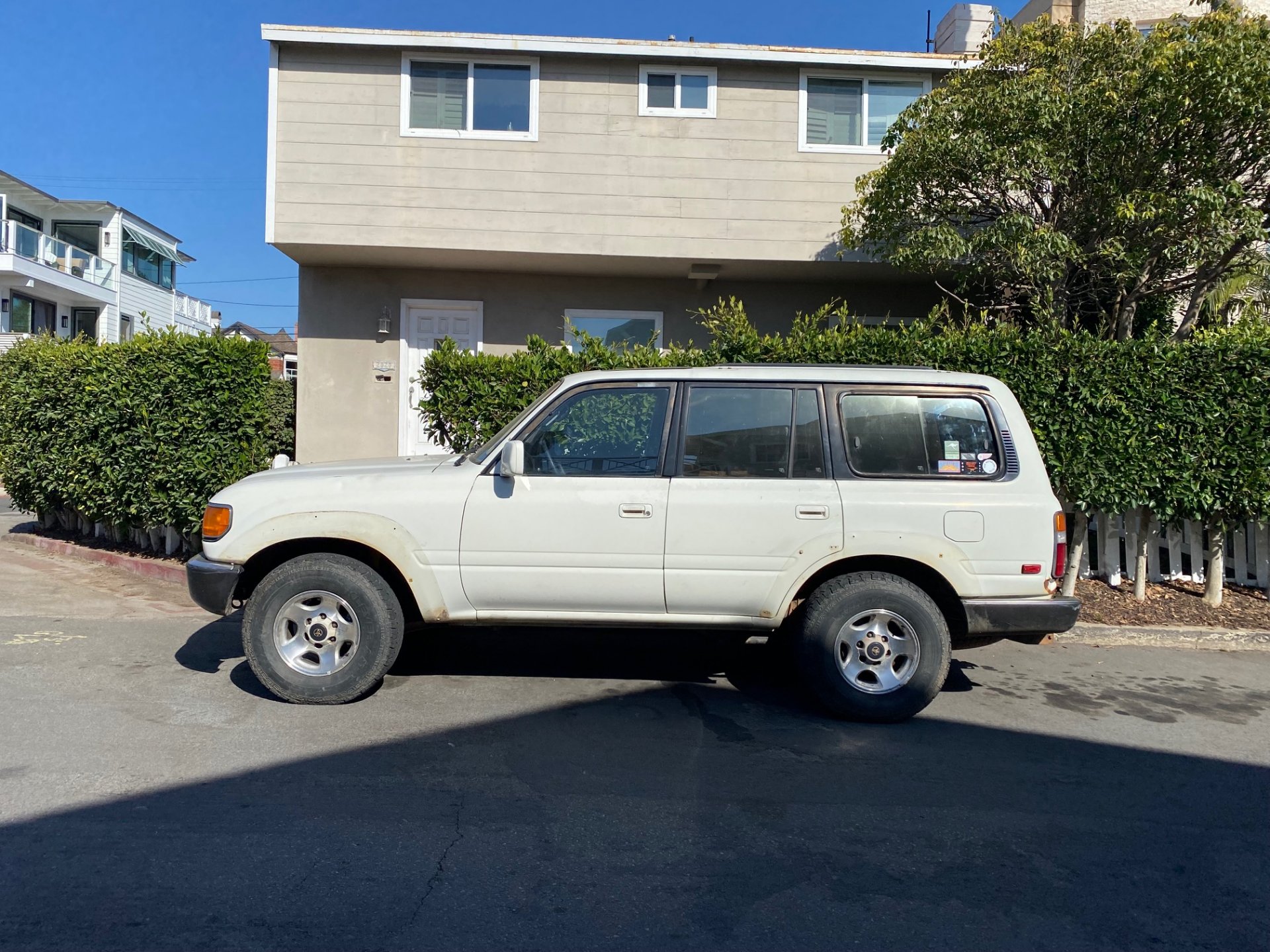 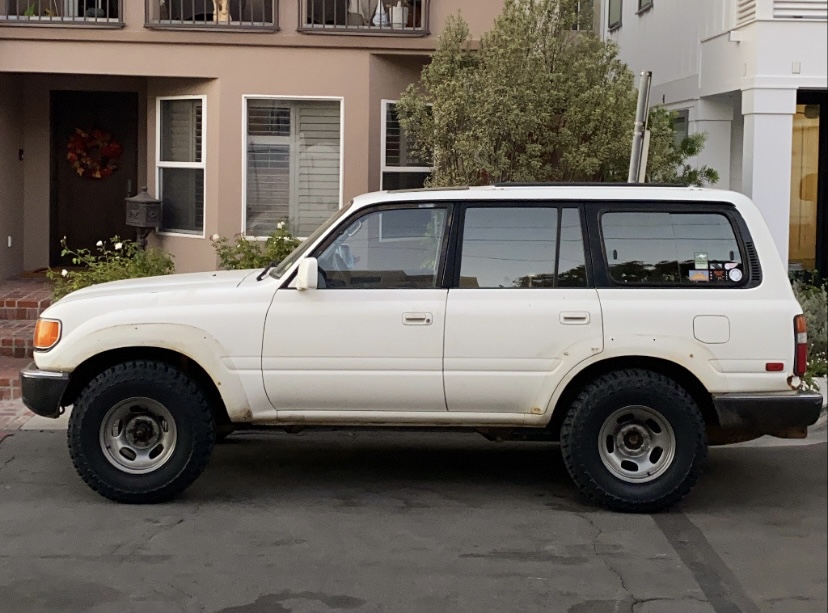 What kind of time warp is going on here? How'd you get a pic from 1973?
The dog looking at your seat...priceless. "Dam that is some hokie shyt right there." lolol
And of course, Grainger-equipped is classic.

Installed some rear cloth seats I picked up locally. Still on the hunt for some gray cloth front seats if anyone had a lead on the west coast.

Also ordered some new birfield joints to remedy the clicking on full lock. I picked up some extra bits and pieces to clean up the carnage from the caliper flying off on our trip back as well.

Next will be patching the fender flare holes and roof rack holes with some fiber reinforced filler and single stage 045 white. Hoping the color is close enough after all these years. 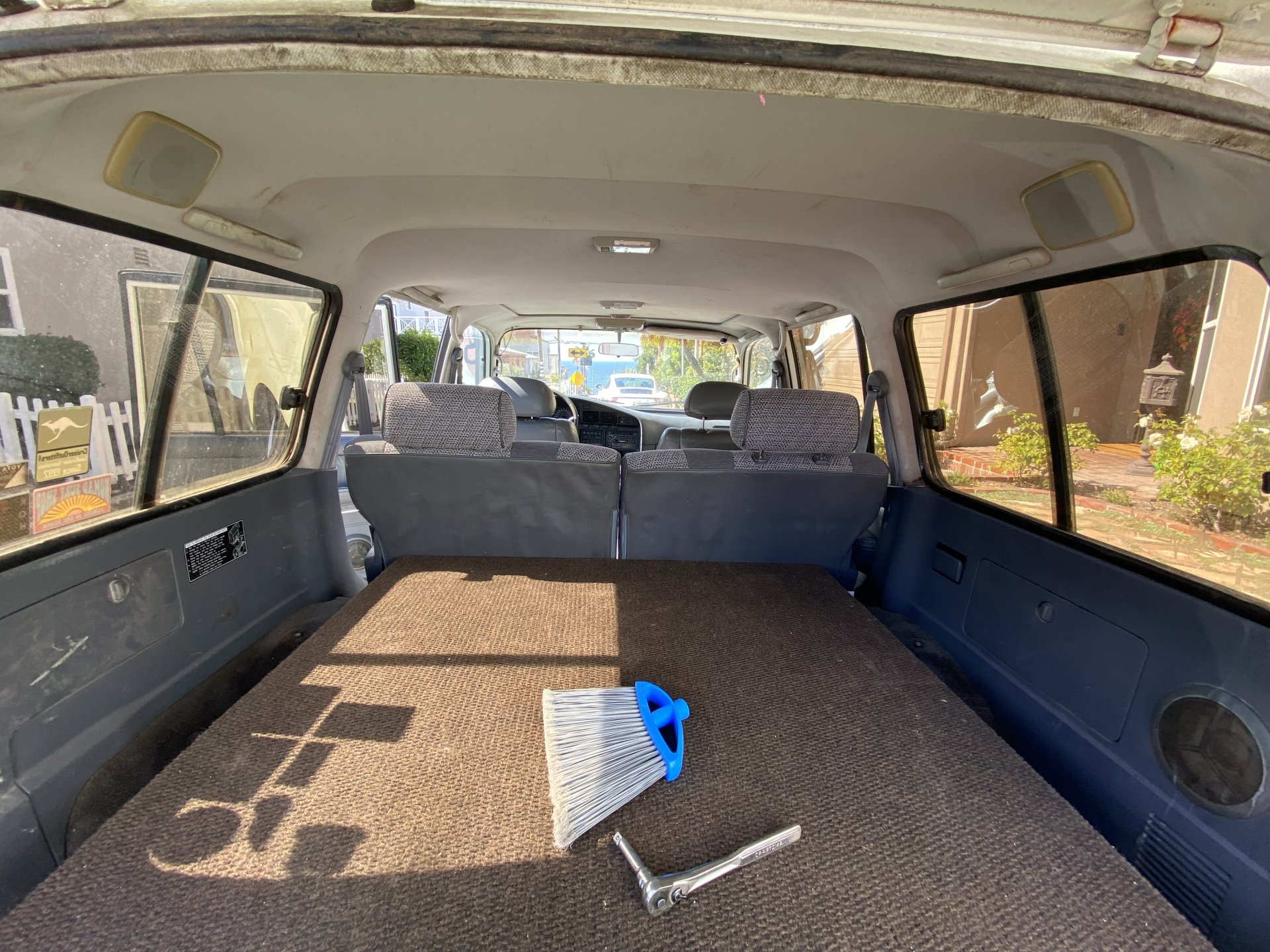 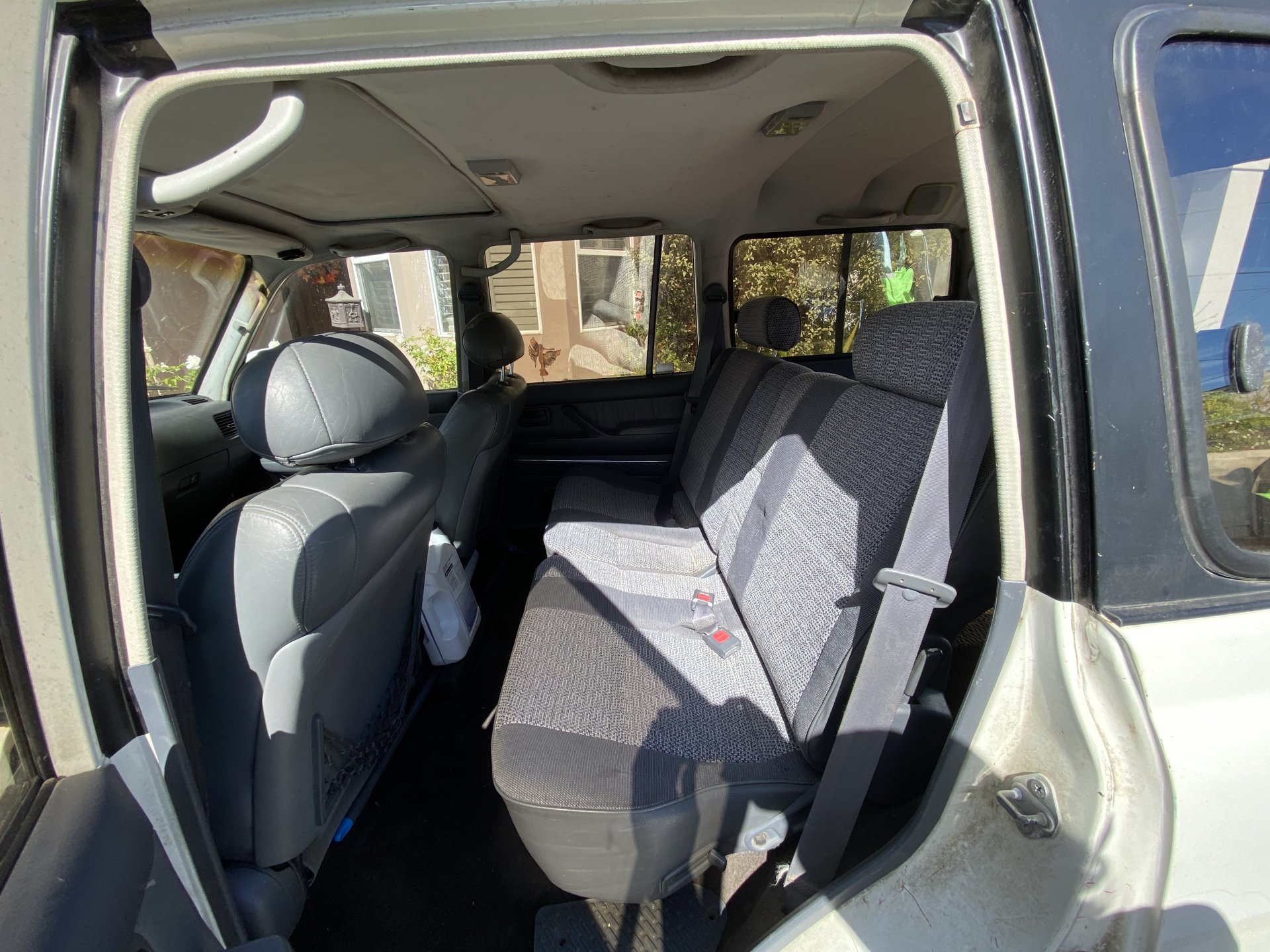 Finally had the chance to tear into the front axles with some good friends. My birfields were still clicking after the rebuild so I picked up some Joint Fuji units to swap in. My front dust shield was also totally mangled from the caliper incident so I needed to get back in there for two reasons.

I’m glad I went back in there because the drivers seal failed when the axle came out. Could have been a matter of time. I swapped in some marlin crawler eco seals, which I should have done in the first place.

I also had my front shocks still in the box because the old washers wouldn’t fit. Some quick honing of the washers and the front shocks were installed without issue. New shocks all around feels nice.

Lots of work still to do, but it feels good to have the birfields in order and most of my collected parts installed. 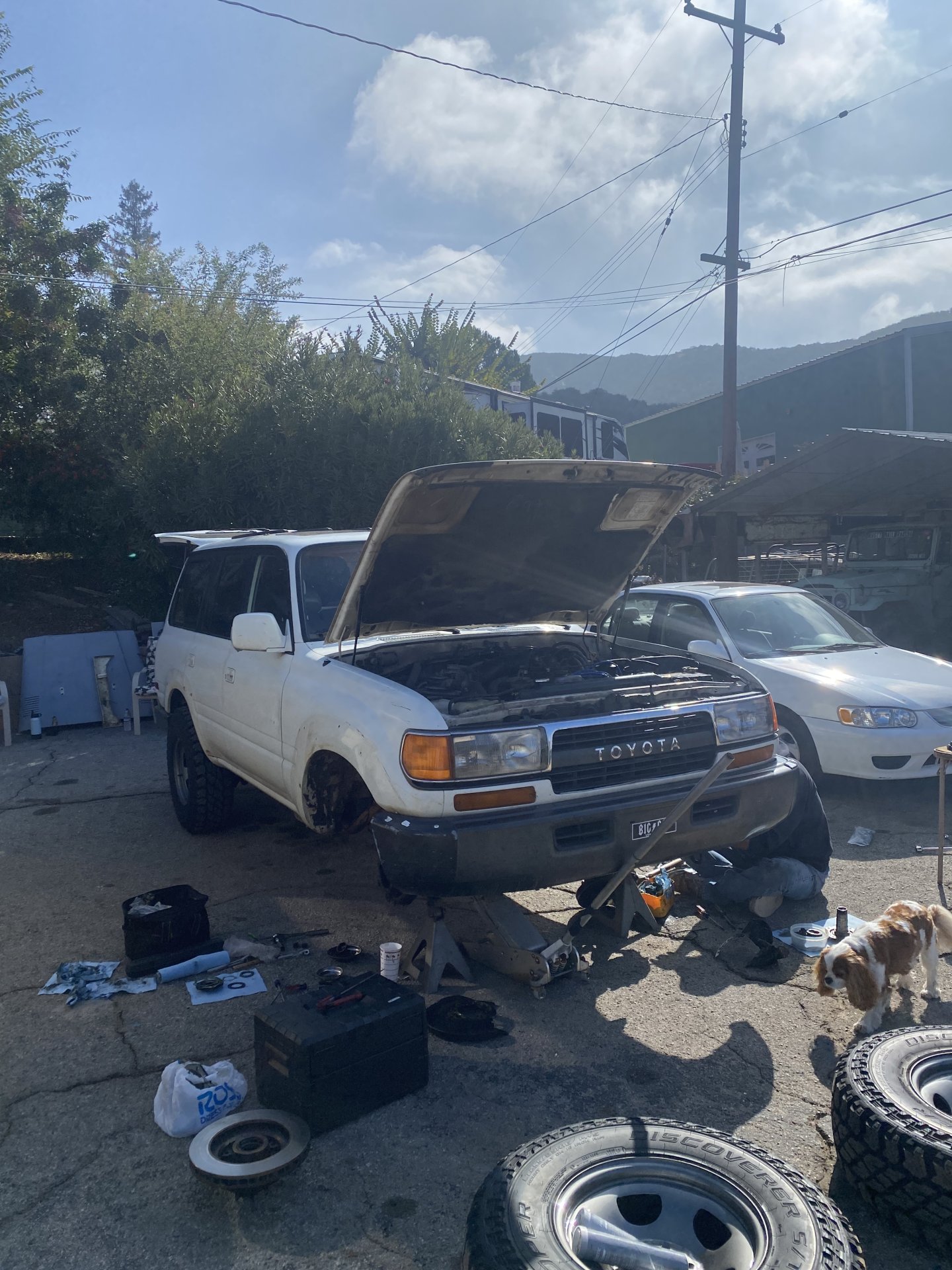 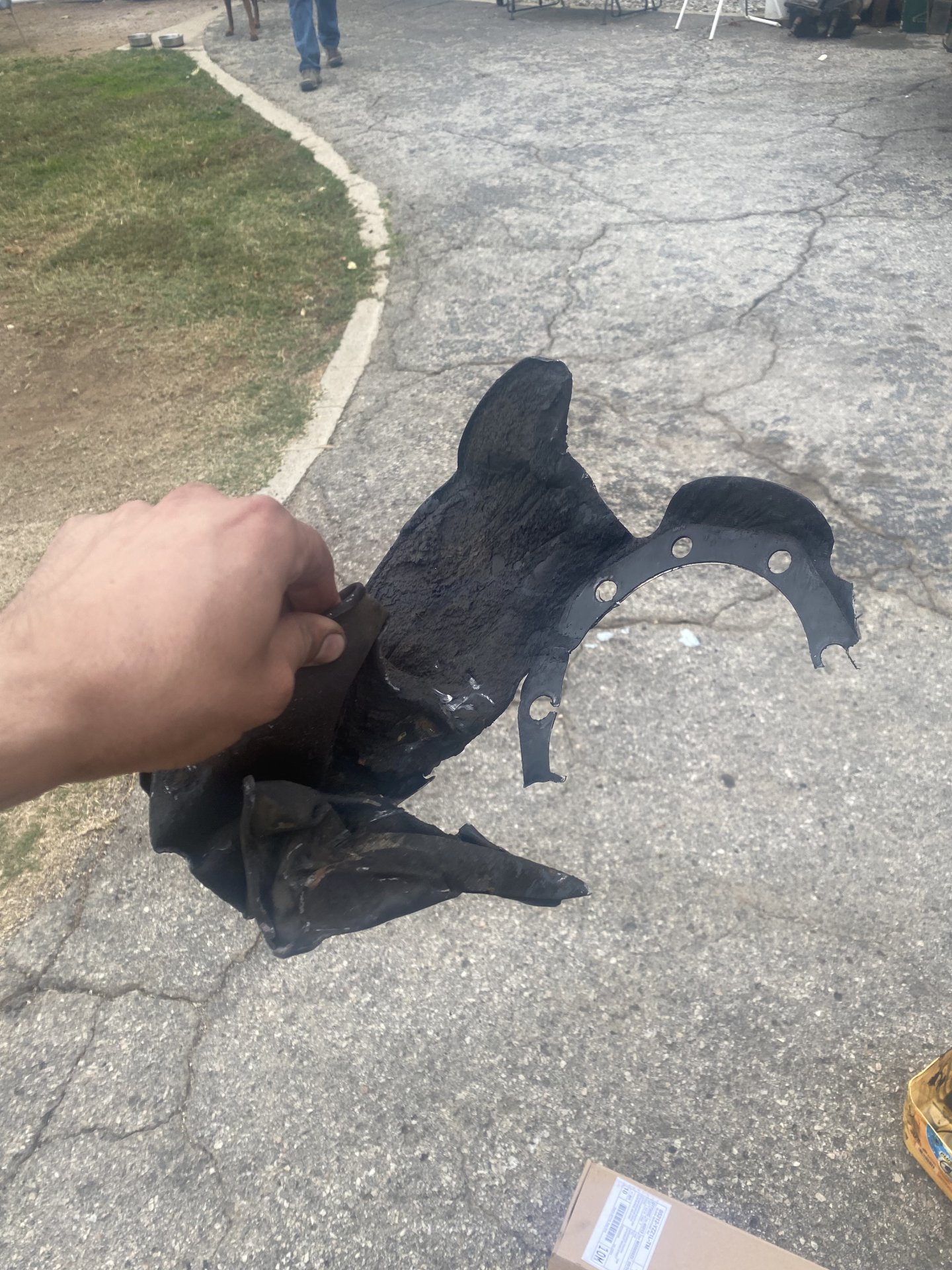 Your dust shield could make a good garage wall trophy!
You must log in or register to reply here.