Please hopefully someone be able to help me on these, im about to upgrade and purchase rear heavy duty control arms but I really don’t know which or who should I go for?
Man-A-Fre offers with Spherical bearings and OEM bushings. In terms of on road handling and stability which one do you recommend?
Slee or Man-A-Fre? 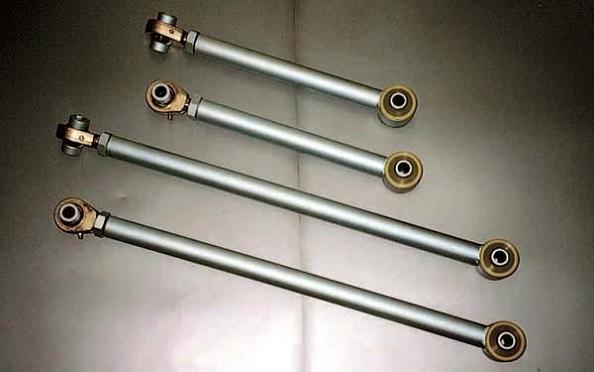 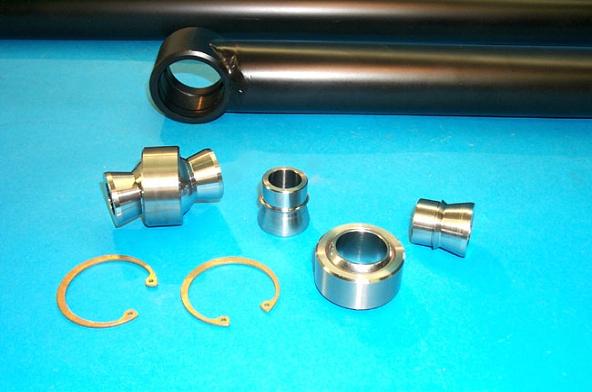 I personally like the flexyness of the MAF but slee has the adjustability. So buy the MAF and then add slee's adjustable link in them and you have the best of both worlds. IMHO

I have a preference to slee's stuff and have typically bought my lift components from them. That said, I'm sure MAF's gear is good as well -- get what you need to get the job done. As long as they're strong/beefy, you should be fine.
Last edited: Mar 21, 2006

Are you speaking of the upper and lower control arms?


Also,
Alex, it is slee's uppers that are adjustable and MAF's lower that are spherical.
MAF is supposed to have adj. uppers soon, whether or not they are spherical is beyond me.
I dont think anyone makes an adjustable lower arm, besides those JDM ones pictured.
D

Kewl... If they work well and hold up to a pounding, where we really need those spherical links is in the FRONT arms, not the rear. Already plenty of flex back there.

Are you speaking of the upper and lower control arms?
Click to expand...

LX, Slee makes great stuff and his installation instructions are second to none in this industry too!

I just got in the Man-A-Fre lower rear control arms with spherical ends and they are BEEFY. I mean they are insanely burly compared to stock. They go on this Thursday and I can report then. Hopefully I will have the rear uppers with sphericals by then too. Yes, MAF has new upper arms with sphericals, they should be available by next week.

I was wheeling this last weekend and ramped the 80 and the rear arms WERE flexed tight in their mounts. THe MAF sphericals should help--we'll soon know.

What are those JDM arms, where can we see them (website)

concretejungle said:
I personally like the flexyness of the MAF but slee has the adjustability. So buy the MAF and then add slee's adjustable link in them and you have the best of both worlds. IMHO
Click to expand...

Cruiserhead05 said:
I dont think anyone makes an adjustable lower arm, besides those JDM ones pictured.
Click to expand...


Adjustable lowers can be a dangerous thing, having the uppers as the only adjustable rods is the better way to go.

Steve-O said:
Adjustable lowers can be a dangerous thing, having the uppers as the only adjustable rods is the better way to go.
Click to expand...


Agreed. i was only trying to clarify as there seemed to be a little confusion. upper vs. lower.

Anyways, be sure to update us with pics and link when the new adjustable stuff comes out.

I had Slee's for awhile. Never had any issues and dude, those things were used like sliders several times. They just never bent. Everyone should have them.


It makes sence that you want the lower ones......

Junk said:
I had Slee's for awhile. Never had any issues and dude, those things were used like sliders several times. They just never bent. Everyone should have them.
Click to expand...


Good to know now that they are going on my rig....if I ever pick them up!!

Why the need for such heavy duties? Specially, for an on roader, low rider, go fast rig like yours, I don't see anything to be gained from spherical ends.

alia176 said:
Why the need for such heavy duties? Specially, for an on roader, low rider, go fast rig like yours, I don't see anything to be gained from spherical ends.
Click to expand...

Ummm....that's sucha good point, why didn't i think of that.

Perhaps he is trying to eliminate some of the inherent slop from a bushing setup. I have a feeling the rigidity of the joint is what he is after, not the articulation. Or maybe he's worried that the 1FZ is just putting out so much damn power that he's gonna start breaking his control arms. LOL

Steve-O, why are adjustable lowers a "dangerous thing"?? Do you mean dangerous from the standpoint of the end-user getting their whole suspension out of whack by adjusting two things at the same time? Having come from the Jeep world where it is quite common to use adjustable upper and lower control arms in the front, I fail to see how adjustable lowers are "dangerous." I'm honestly surprised nobody offers adjustable lowers. In the Jeep world we generally used the lowers to adjust wheelbase and the uppers to adjust pinion/caster angle. Why would the same not apply here?

Let's talk about what you are getting with both. This isn't about quality, i.e. Slee vs. MAF, per se.

An arm that uses rubber on both ends (such as OEM or Slee's) is reliant on the rubber "deflecting" as the suspension articulates. The more arm angle and travel you have, the more deflection is required (you have both twist and fore/aft movement), and, generally speaking, the more wear and tear on the rubber. At the point a rubber bushing either a) is limiting flex due to inability to deflect across the full range of travel, or b) is suffering a shortened life due to usage outside of its design limits, it is time to look at spherical bearings.

An arm that uses a sperhical bearing such as the one pictured (this is commonly known as a "heim" joint), relieves a good deal of the stress on the other rubber bushing (it no longer needs to accomodate twist, but still must handle the fore/aft deflection), but you don't tend to introduce harshness into the suspension because you still have rubber on one end. Sounds great, right? Not so fast.

As you can tell by the picture, heim joints are not sealed. They are built with a teflon liner between the race and bearing, which allows smoothness and keeps grit out (at least for awhile). Under load bearing conditions, the quality of the teflon bonding process and "tightness" of the joint is extremely important, because you can actually spit out the entire liner, ruining the bearing.

I like heims a great deal in custom panhard and and steering applications as they can last a couple of years, can be used on both ends to allow zero lateral movement, and have an excellent load rating for their size. In load bearing suspension components, I would not run them on a daily driver for durability reasons. Look at the picture - you have a grease zerk, but how does the grease stay in the joint without a seal? I have run these greasable heims in the past, and the grease pretty much just attracts dirt (and the hole for the zerk reduces load rating). There is a great deal of history in the 4x4 world about the failure of heim joints to survive the rigors of daily driving...they are largely now used in more extreme rigs (trailer queens) where these type of components are considered a regular wear item.

Given the desirability of spherical bearings to allow unrestricted flex, but with real world testing of their limits, the "compromise" solution on the market is called the Johnnie Joint, named after Johnny Currie of Currie Enterprises who invented it. This setup uses a spherical ball joint, but it is sealed in a housing, supported by a poly "bushing", and fully greasable. This joint is probably the best of both worlds - it does everything the heim does without the greater risk of premature failure.

If I wanted spherical bushings, I'd buy the MAF arm without the heim and pick up a set of johnnie joints (which cost no more than a quality heim)....just make sure the thread size is the same (both should probably be 3/4"). I'm not sure your typical 80 with swaybar attached will benefit all that much as the rubber on the OEM setup seems to allow the full flex, and I don't think that the "slop" from rubber bushings would be noticeable on the non-steering axle vs. a spherical joint on one end.

I had heard someplace (urban legend?) that heims are not legal for hiway vehicles. Has anyone else heard that?

All the IFS long travel use uniball UCA's... I don't think it's a problem for street use (then again, maybe it's a don't ask/dont tell thing)

I do know there are squeaking/noise issues and thus the reason most changed to add a zerk fitting...

I would like new LCR's for 2 reasons:
1. more beef to use as a slider
2. adjustable to tweak susp. geometry
You must log in or register to reply here.