"acoustically dead" ha. That's how I feel when my daughter tries to teach me how to play the guitar.

The carpet I bought/installed (ACC/Stock Interiors) is available by the yard. I will likely use that for the doors.
I mean, I could use another shade and just keep the chocolate rainbow theme going.

I'm struggling to see how to finish this area without dropping $350 on a couple fiberglass panels - particularly... 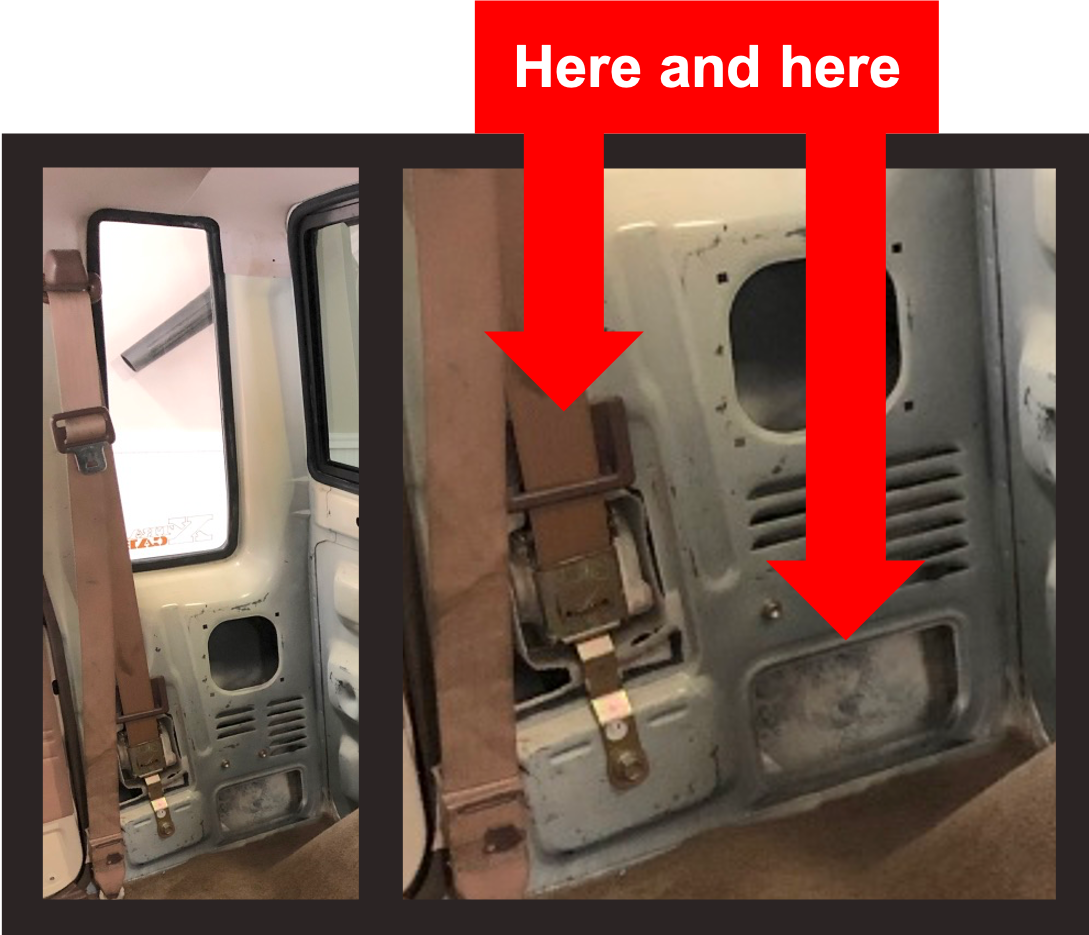 I guess, maybe a few small pieces of steel - make a plate to cover the seatbelt retractor, e.g. over mechanism, under feed slot. Then, just cover that and everything with Dynamat then carpet?

Consider using ABS. Can cut it with normal wood working tools and glue it with sewer pipe glue. I bought black, textured on one side ABS in a 12" X 24" section off amazon for not a lot. Have been gluing it with black ABS pipe glue and so far it has worked awesome. I'll be making more with it soon. Made an insert in the Blanc-Oh's center console to put cup holders back into it (PO gutted it for a GPS mount) and I'll soon be making a switch panel and a power port panel from it. I've no pics of any of this, yet.

I was just going to mention, my 85 has half door cards up front but its not drilled like your doors in that lower bare section.


Manhattan said:
@c2dfj45 those panels are very cool. But, given my 7/8 coverage panels... I'm thinking they might look a bit odd - unless they're exactly 36.5" Love the idea though.

Yeah, I think they're supposed to look something like this... 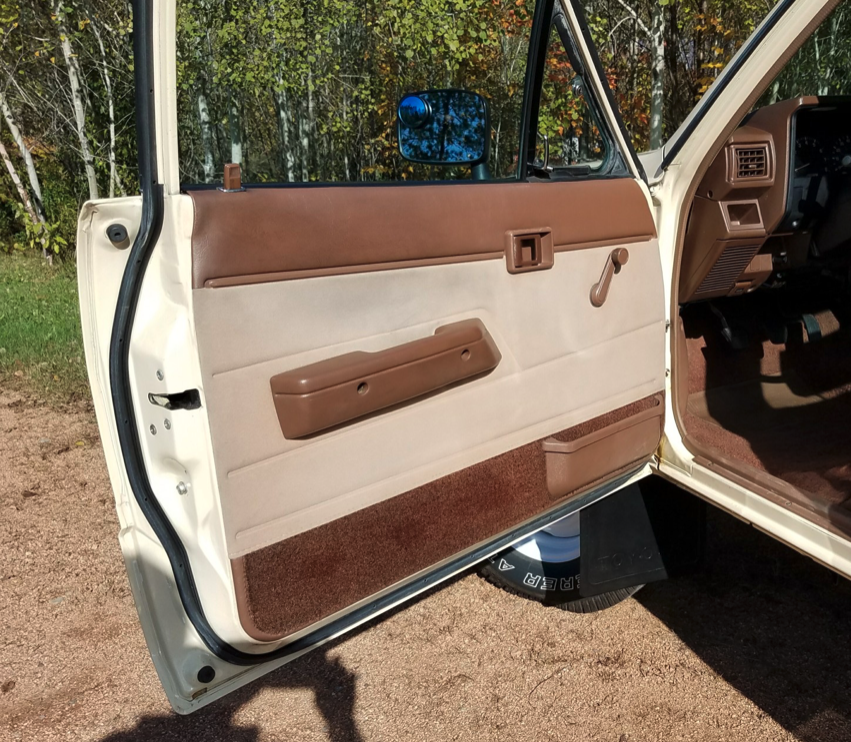 And the lower holes are for that sweet sweet carpet

@ntsqd I like the ABS plastic idea better. Good call. Easier to work with (at least for me!), won't rust and probably quieter.

Occurs to me that you could probably fit some speakers into those side panels and and have them poke thru those existing large-ish rectangular openings. If you're going to cover the panels, then cover them with some of the "audio cloth" so that the speakers don't even show.

The above pic is exactly how my '84 was set-up, down to the color combo. I always kept the AAA KA county maps that covered the Mojave Desert in the driver's side pocket.

Ftr, these 4s are pretty good in the dash. Mine are kinda playing into the rollbar, so there's that. Otherwise theyre loud enough to ring my ears.

MDF: I guess it has to be good for something...
T

I don't know how much of an "audiophile" you are, but vehicles have the worst possible enclosure to try to reproduce sound in. Having said that, the kick panel is the best spot to put a speaker in a vehicle. Choosing to put a speaker in the kick panel over the door likely comes down to knowing what you're probably supposed to be hearing and then wanting the best possible sound reproduction in a vehicle. But I wouldn't sweat it too much. There's a lot that goes into a stereo way before being able tell the difference between a properly done kick panel set up vs a properly done door set up.

To fully reproduce sound, the stereo needs to be able to produce low mid and high frequency, and ideally you'd have a different size speaker for each range of frequency. But...that's more along the audiophile train of thought.

In my opinion, if you like listening to music, then at minimum any stereo install requires amplified 6 1/2" components with a 10" sub. That will sound REALLY nice, and that is more than enough sound for the air space we're dealing with.

The difference in mid bass between a 5 1/4" round speaker and a 6 1/2" round speaker is substantial. The difference in vocal reproduction is noticeable, but you're not leaving anything on the table by going with a 6 1/2. (audiophile mindset says run a 3 way...tweeter, 4 or 5" mid-high driver and a 6 or 7" mid-bass driver...but the 6 1/2" component set up is a really nice compromise compared to say a 5 1/4" component set up where you leave out a lot of midbass or a 3 way where it's pretty complicated and expensive)

I have run a 5 1/4" component set, and they do sound really nice and have super crisp and clear sound reproduction, they just lack on the mid bass department. On the song counting crows by mr jones... the 3 bass notes at the very beginning are totally gone in a 5 1/4" driver. You can hear them, but the 5 1/4" doesn't have the authority to make it sound like a bass note. Which leads to turning up the sub woofer frequency to reproduce that sound, and it doesn't reproduce the sound tight enough or precise enough to take the place of a 6 1/2" driver.

A 4" speaker is even more so better at vocal reproduction. Mid bass would be non existent.
6x9's are poor with vocal reproduction, but good mid bass.
I know what you're thinking... run a 4" in the dash and a 6x9 in the back.... but a matched 6 1/2" component set will blow that out of the water in sound reproduction.

a 10" woofer has the authority to re-produce a low bass note and let you know its there in the music, but won't ever get BOOMy loud and obnoxious. a 10" woofer is pretty mild in the boomy department, but really brings the sound full circle that is being produced by the mid driver. If you like a bit of boom sound and want the raw air movement...then I'd recommend a 12" sub.

And to recap, I don't know how much of an audiophile you are but if you literally just want to reproduce some music and are happy with basic radio quality music reproduction, literally just about any coaxial speaker powered by a head unit is going to do that. Placed anywhere in the truck. Done. Don't overthink it if you fall into this category.

Damn @toyotaboy80 ... that's killer info. I'll be going back to that when I start order stuff. Thanks!

The only thing I will add to @toyotaboy80 post is, depending on the type of music you listen to, you can replace the 10" sub with two 8" subs. The bass will end up being a bit tighter and would be great if you listen to things like jazz. The majority of stereos I have built ran either a single or twin 10" subs in a sealed box with the right cu ft for the sub I was running. I have ran 12's and 8's as well and a really good 8" in a tune ported box also sounds really good. Just my .02
You must log in or register to reply here.
Share:
Facebook Twitter Reddit Pinterest Tumblr WhatsApp Email Link