Since the Magnaflow 23120 replacement is only $400 less than the $1400 OEM pipe/cat, I thought I'd ask, has anyone used these, and what are the thoughts after installation? 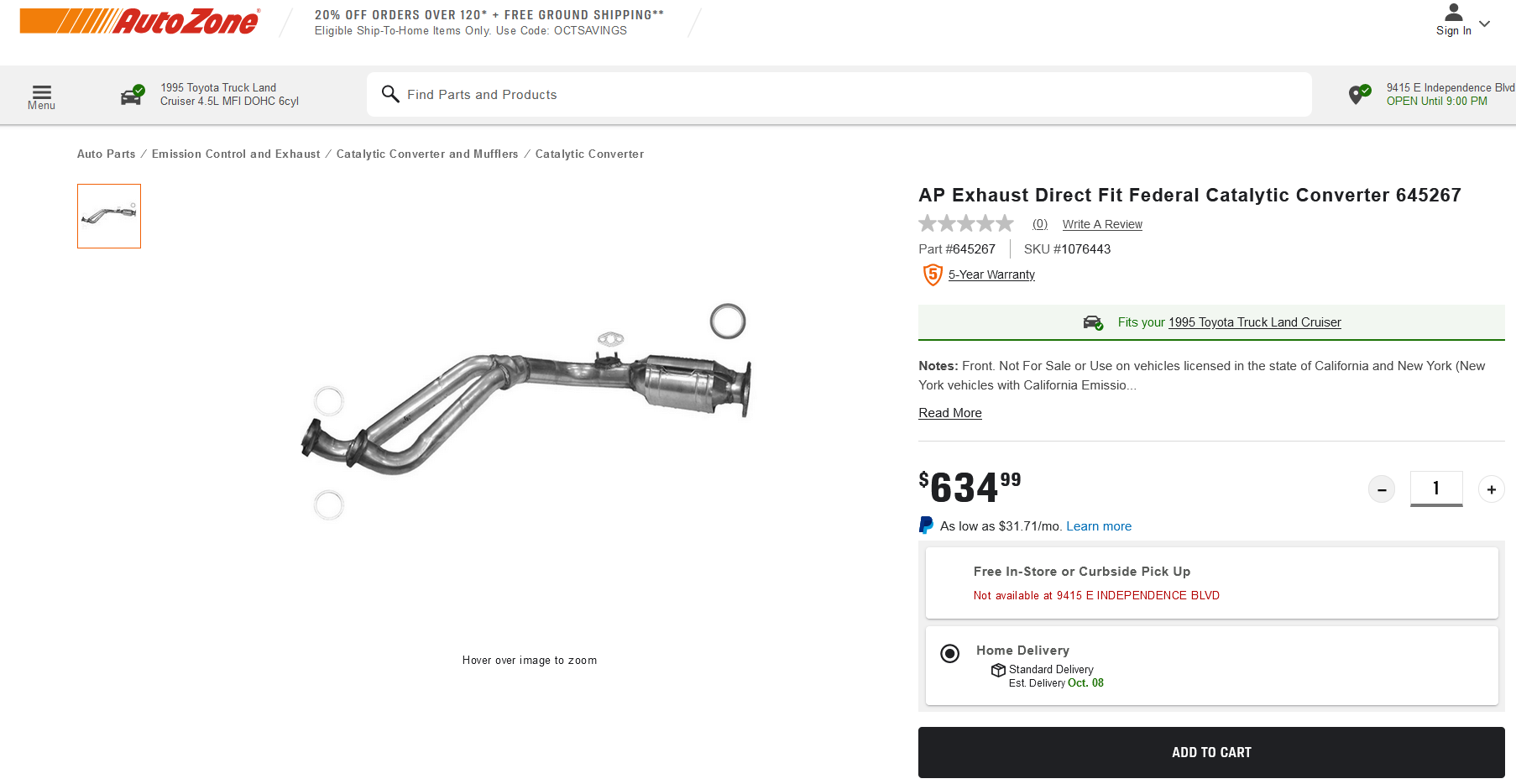 I payed $513 three days ago on Amazon shipped for free. Be installing this weekend. I have researched and people have complained about the flanges being to close together by 1/4” and may need some massaging. Also the gaskets are s*** and oem is the way to go. I’ll post up once installed and by my math it’s about a 7-800 dollar difference.

Don't have any experience with any of the aftermarket Cats but it's been discussed before that the non-California approved Cats may not have as much of the expensive metals (Platinum, Palladium, Rhodium) in their matrix compared to California Cats or OEM.

Kernal said:
Don't have any experience with any of the aftermarket Cats but it's been discussed before that the non-California approved Cats may not have as much of the expensive metals (Platinum, Palladium, Rhodium) in their matrix compared to California Cats or OEM.

Wonder who's had one of these aftermarket Cats on the longest (miles/years) without a Cat inefficient code?? IDK
Click to expand...

Given the numerous reported fitment problems at the headers, and the fact that no one has reported actually needing to replace the y-pipes, has anyone successfully replaced only the front cat?
1977 FJ40, 1995 FZJ80 (x2), 2005 GX470, 2000 LX470
2008 LX570-graduation present for number 1 daughter
1994 FZJ80-graduation present for number 1 son
The trick to success is making sure you're solving the right problem.

I bought the Davies last week. It won’t fit so I am having a local shop weld in a couple flex fittings but it was only $240
1993 JDM 1fz-fe.Automatic.Green.Steering wheel on Right.ice maker w/trays.factory swing out tire carrier&winch&ugly brush guard.Third row seats but I removed.Probably needs new carpet.idiot painted frame to hide rust.exhaust leak,battery cables shot

I've had mine on a couple years. Just went with the one cat, did not install a second, no codes so far. We don't have emissions checks here though.

Plan on buying OEM gaskets. The ones that came with the kit lasted about a month. OEM has been good since I put them in.
1997 FJZ80
1966 International Scout

Malleus said:
Given the numerous reported fitment problems at the headers, and the fact that no one has reported actually needing to replace the y-pipes, has anyone successfully replaced only the front cat?
Click to expand...

I installed them on mine about three years ago. Mine are the aluminized steel version, not 409SS.

Absolutely the easiest fit and exhaust system I've ever done. I bought every bolt, gasket, and stud necessary before I started.

I broke off one manifold stud, but it came out with the right heat and application.

I bought mine when my son was working for O'Reilly's and it was half of what you listed above. So I bought two when I did it.

Make sure to clean out the O2 sensor holes, chase the studs before installing. I also sprayed 3 coats of high temp clear coat on the system before I installed it in order to make it last as long as possible. It has been great so far. Slightly louder rumble than stock but minimal. I would absolutely use them again.
1996 FZJ80, Unlocked, Stock w/ Chrome Package, Badlands 12K Winch, 285 Duratracs, CDL, Pin-7, BH3D Cupholders, OME 2.5" Heavy Springs & Shocks, WKOR Sliders
***Dis-use is harder on a car than mis-use.
***Fix a man's a truck and he will drive it for a while.
Teach a man to work on his own truck and he will drive it for a lifetime and hopefully quit bothering you.

Installed over the week and no fitment issues. Bolted right up with no tweaking necessary. The bracket that supports to the engine is a little bit of a fight but as far as exhaust mounting it went right in. Sounds just a little louder but that could be placebo. Amazon was the lowest cost I could find.
97 Collectors edition 3x locked 259k

TomH said:
Try hottexhaust.com. I believe it is a Magnaflow store and they have a 20% off offer.
Click to expand...

What do I need for front rotor replacement