I recently had the 80 partially tore apart, running coax down the passenger side, for a CB install.

As often happens when I undertake any project on the Cruiser, I end up following what I call rabbit trails; one project leads me to investigate something different, that may lead to something else completely different, again & again.

So, as I was saying, the CB install had much of the dash removed. During this process, I noticed the passenger side floor mat backing was damp. I have also been chasing down an issue with coolant consumption (or a leak). Thinking the damp mat might be a sign of a leaking heater core. Since I already had the glove box & supporting brace removed, I thought I should pull the A/C evaporator unit out (I also have another issue with that & the system is empty at the moment) so I could inspect the heater core for a leak (I had already put a UV dye in the coolant & my handy UV flashlight makes leak identification much easier). - RABBIT TRAIL #1

During the removal of the evaporator unit, I had to remove (or at least dismount) the ECM. In doing so, I noticed a rattle from the computer (as if there was a small pebble or something similar inside the case, loose. Having had the cooling unit assembly out last Summer, for replacement of the expansion valve, I seem to remember the rattle was there then too. But because I was in a hurry and it didn't seem to affect how the Cruiser ran, I left it alone. 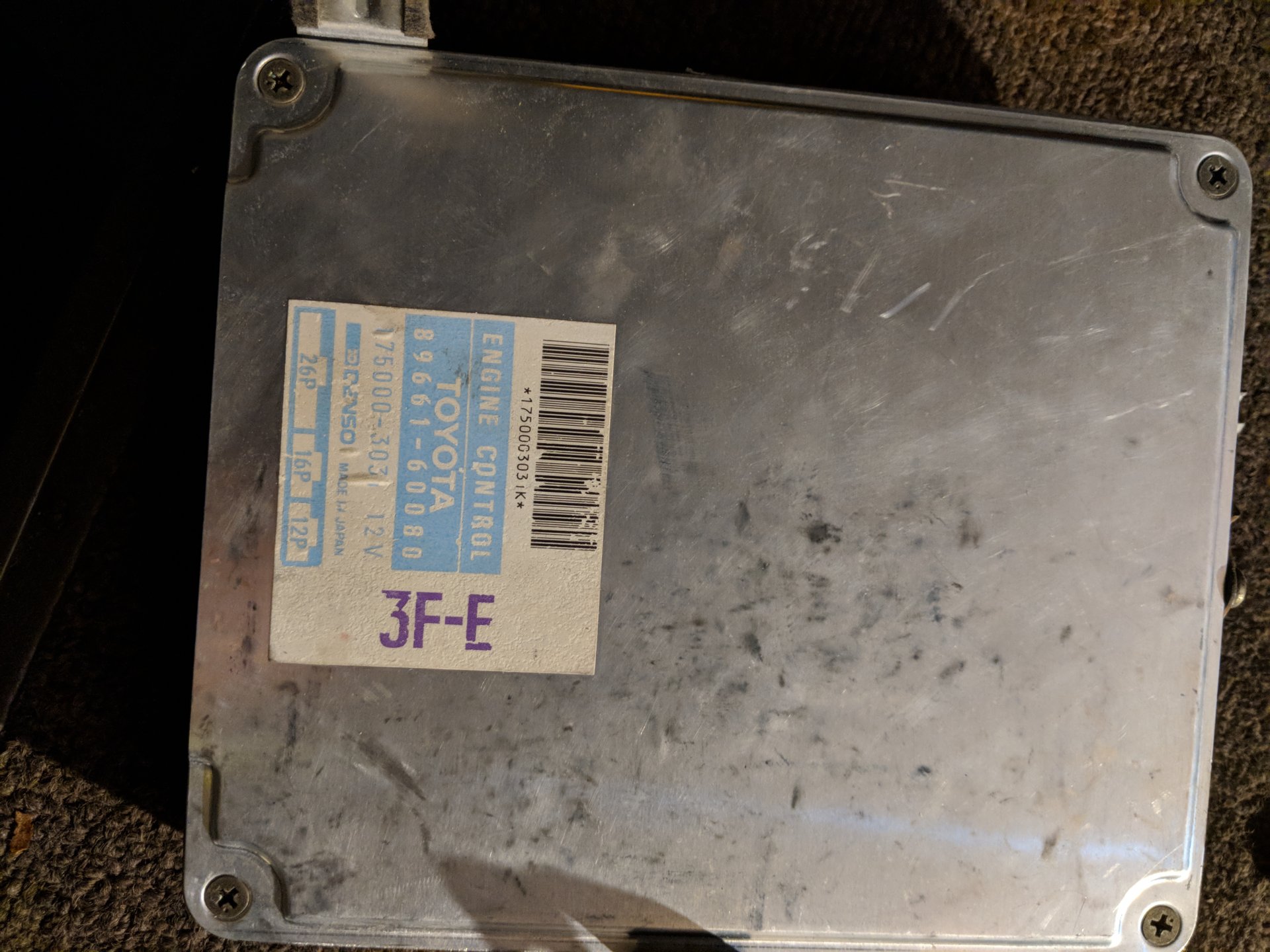 91 FJ80 3FE ECM burned diode D105
Well, this time, I wanted to know WHAT that rattle was. So, I completely removed the computer & decided to open the case to investigate. - RABBIT TRAIL #2

Upon opening the ECM casing, out drops a small black electronic component; about the length of a pencil eraser (the pink round one that comes attached to the tip of a pencil), only slightly larger diameter. It looked like the Danny Devito of diodes, short & squatty. 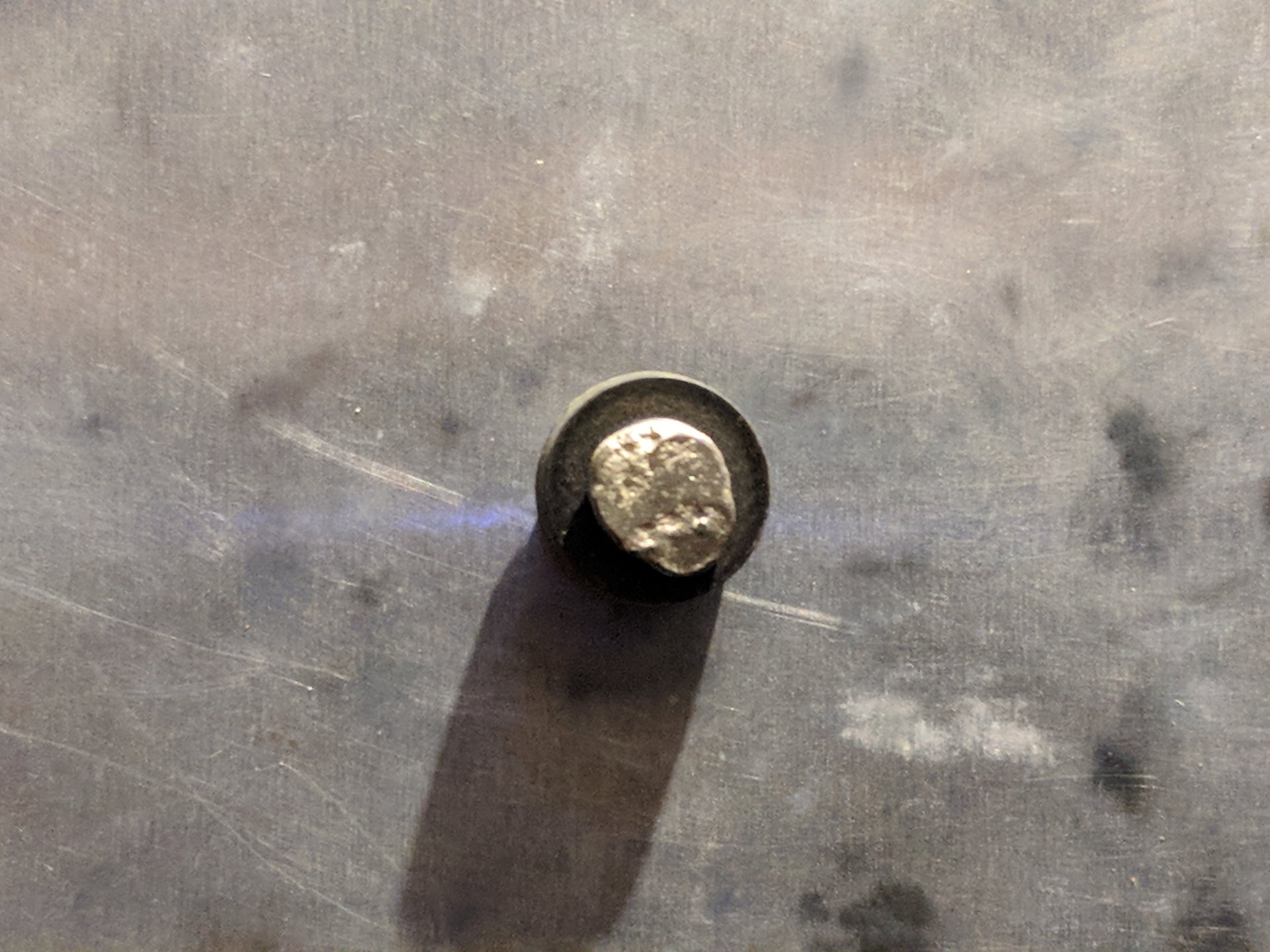 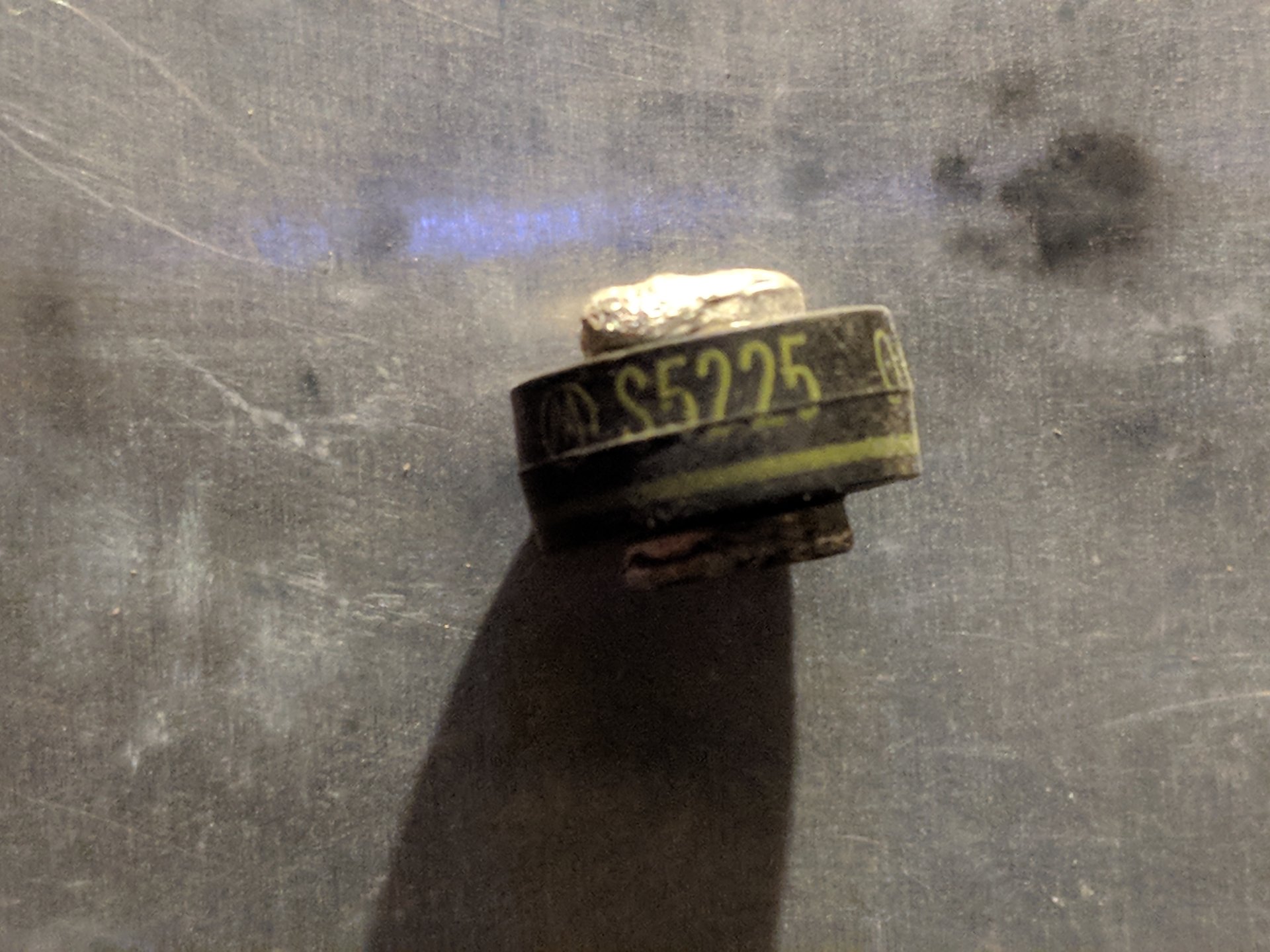 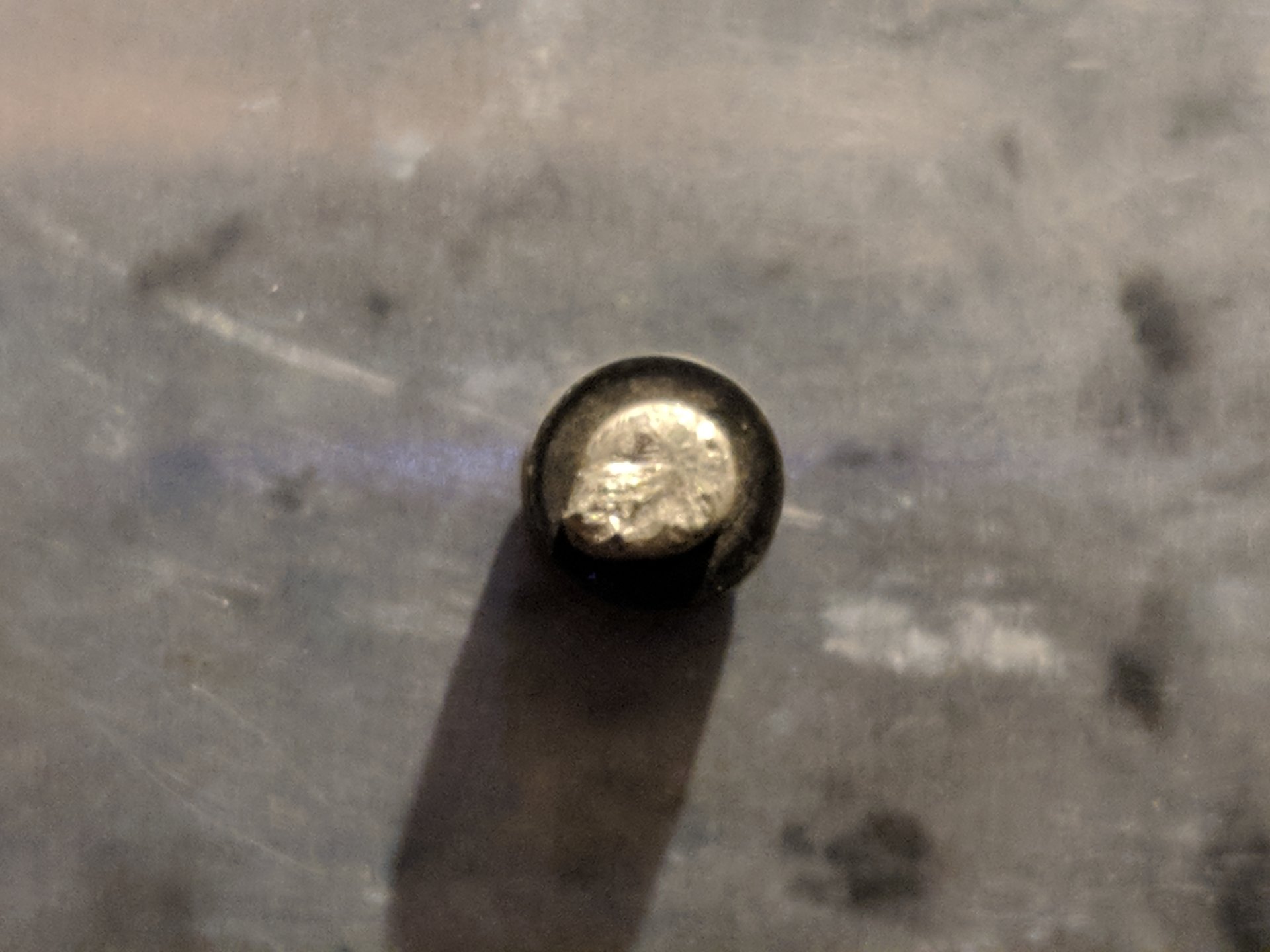 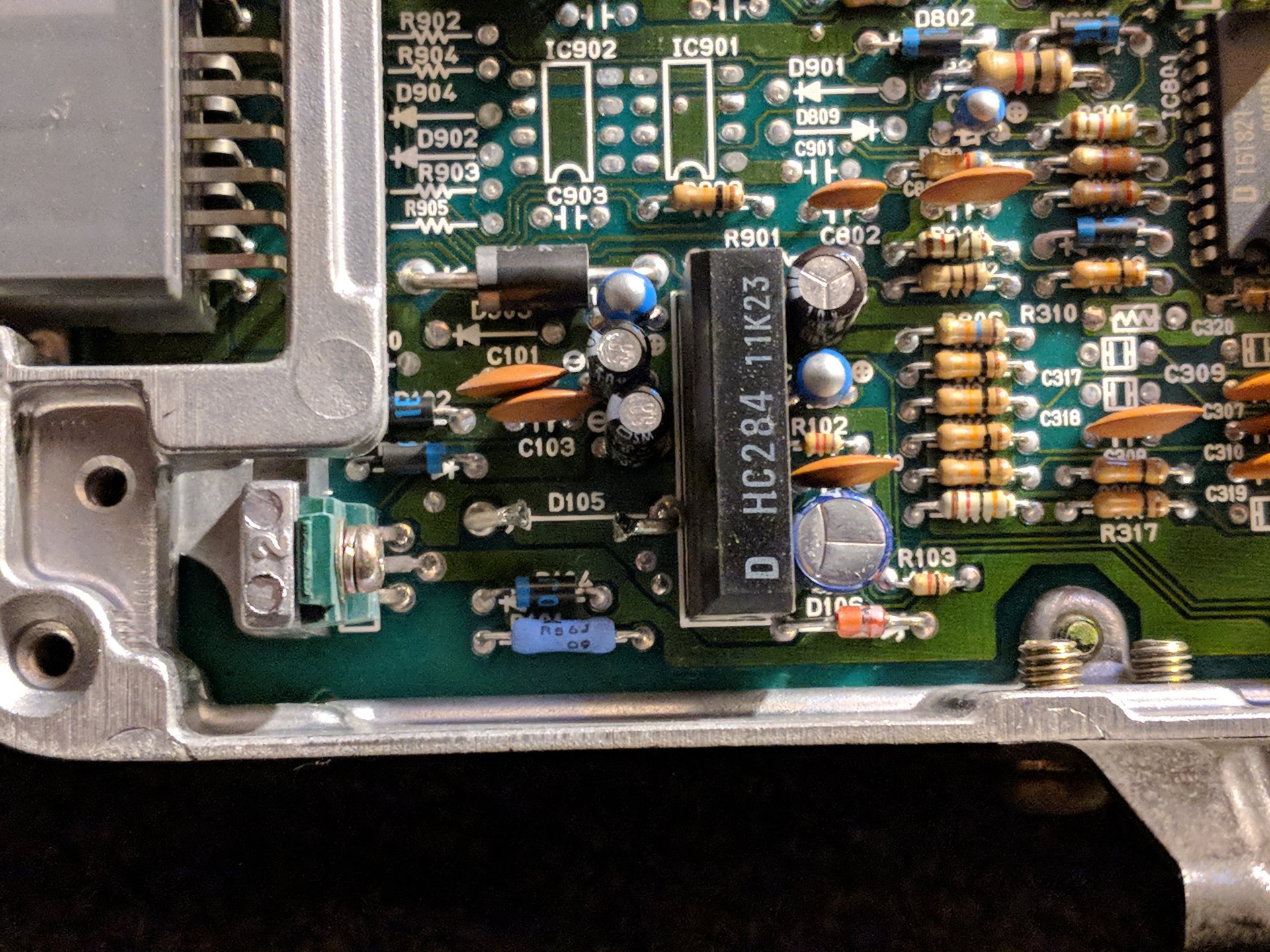 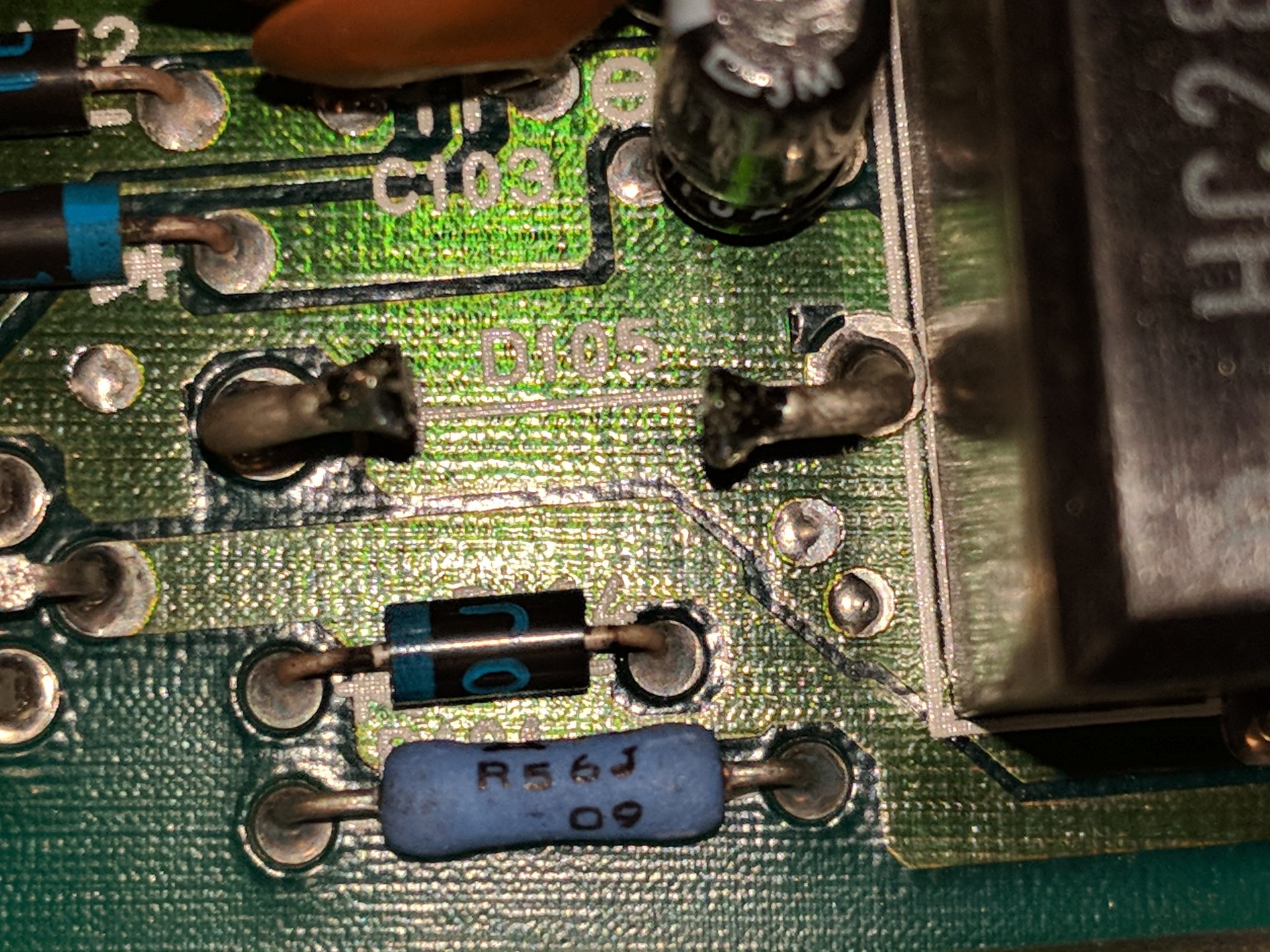 91 FJ80 3FE ECM burned diode D105
Now, I've found a couple of threads detailing similar problems, with D105 being melted off the mounting legs. These look exactly like what I've found in mine. All of these seem to have one thing in common, they have issues with the engine dying & not starting. The kicker is, mine seems to run fine.

After reading through these threads, the consensus seems to be that the diode melts from a voltage spike.

How does this missing component seem to not affect the engine running? (at least not majorly)

Any help would be appreciated.

In high school I had a political science teacher that taught us that the definition of 'conservatism' was; if it's not broke don't fix it. So if your 3fe runs nominally then maybe just leave it alone and down the road find a cheap ECM on eBay to replace it with right?

Do you have access to the electrical schematic? I wonder if it has detailed info on the ecu. At any rate it looks easy enough to solder in a new one.

Alleycats said:
In high school I had a political science teacher that taught us that the definition of 'conservatism' was; if it's not broke don't fix it. So if your 3fe runs nominally then maybe just leave it alone and down the road find a cheap ECM on eBay to replace it with right?
Click to expand...

Oh, I put it back together & am running it. In fact, I assisted with a historical run for Cal4's Winter Fun event, yesterday. This added about 160 miles to the odometer, with a number of those being sans pavement.

It has been, & will continue to be, my daily driver. 35's don't make for a very efficient commute, but there's something to be said about quality of life & the soothing howl of KM2's give me peace.

Technician1985 said:
Do you have access to the electrical schematic? I wonder if it has detailed info on the ecu. At any rate it looks easy enough to solder in a new one.
Click to expand...

Yeah, I haven't been able to find anything with an actual schematic of the ECM.

That's why I came here asking questions. While Ive been a Cruiser head since June of '91, I know there are those that are far more knowledgeable than me on these things. I believe somewhere out there in Mud-land is someone who knows the answer to my questions & will probably give an answer that most of us will only partially understand, simply because we don't know what they know.

The Toyota EWD and FSM do not give you schematics of the internals of the ECU. I would keep an eye out for someone doing a V8 swap or parting out a 91. The ECUs have different part numbers for a 3FE out of an FJ62 as opposed to an FJ80.
You must log in or register to reply here.