For those of us that are smog exempt, but want to run a cat anyway... Who has a good US made stainless steel cat that does it’s job without being extremely restrictive? And is cost effective? Or is that just a total unicorn?

Zor said:
For those of us that are smog exempt, but want to run a cat anyway... Who has a good US made stainless steel cat that does it’s job without being extremely restrictive? And is cost effective? Or is that just a total unicorn?
Click to expand...

I just installed a Flowmaster cat in my truck. USA made. It has a stainless steel outer shell. $62 to my door. Go to www.holley.com, pick the cat you want, and order from Summit Racing.

Can actually see thru the modern cats that I've used. Those weren't anything special. If the gas flow isn't too turbulent going into the cat I doubt it is much of a restriction.

FWIW You can go with too big of an exhaust tube and I suspect that stock to mild 22R/RE's may lose some low RPM power with a 2.25" exhaust.

ntsqd said:
FWIW You can go with too big of an exhaust tube and I suspect that stock to mild 22R/RE's may lose some low RPM power with a 2.25" exhaust.
Click to expand...

I agree with this. One word for it is "savaging." Popular wisdom is to install 2.25" behind our trucks. I've often questioned that logic, and suggested 2" to try and hold onto some of the lower-end torque.

Years ago I had a Ford 302 that got a single 3" tube put on it aft of the Y pipe. At 63 mph it droned SO BAD that you basically couldn't drive it within the 60-65 mph range. It was physically beyond uncomfortable to be in the car at those speeds. The Flowmaster guy at the SEMA show told me two things that I'd done wrong and something that I didn't know. The latter was that Ford 302's are known for a peculiar resonance at the rpm that produced that vehicle speed. One of the former was that even in a single tube, 3" was too big for a 302 and what was happening was that at that rpm the exhaust pulses were not only slowing down in that too large of a tube, but that they were actually banging into each other at a rate that AMPLIFIED those pulses. The second was that I'd placed the muffler where it was convenient, not where it needed to be in the system and as a result I had way too long of a tail pipe compared to the length of the head pipe. He offered two solutions, one was to re-do down to a 2.5" or possibly a 2.75" tube. The other was to acoustically make the tail pipe two pieces, each half as long as the original. He said the way to do that was to clamp a heavy piece of something on the half-way point of the tail pipe. That wouldn't fix the loss of power form too large of a tube, but it would make the resonance go away. about a pound of lead made the resonance stop and the car was driveable at any speed.

@abuck99 - good call on Magic Mufflers. Three guys stopped what they were doing, put Patty on the lift, the lead tech and the owner talked about options - sizes, brands, etc... narrowed to two mufflers... then held the mufflers in place - engine running - to let me hear each of them. They located the muffler and routed the system exactly where I wanted - even called me out to get confirmation on the bend and angle for the side-exit. It is soooo much nicer driving Patty now.

But it gets better - I asked the owner if he happened to have an upholstery guy he liked. He handed me a card - said he'd done lots of work with the guy... That was my next stop. The shop is EXACTLY what I'd been hoping to find, i.e. huge rolls (bolts?) of fabric, an old guy on a big sewing machine.... perfect! His price: $700 for both seats. Boom.

The punchline: Andrew, next time we meet up at that little diner for breakfast before hitting the trail and dinner after we wheel - on me. 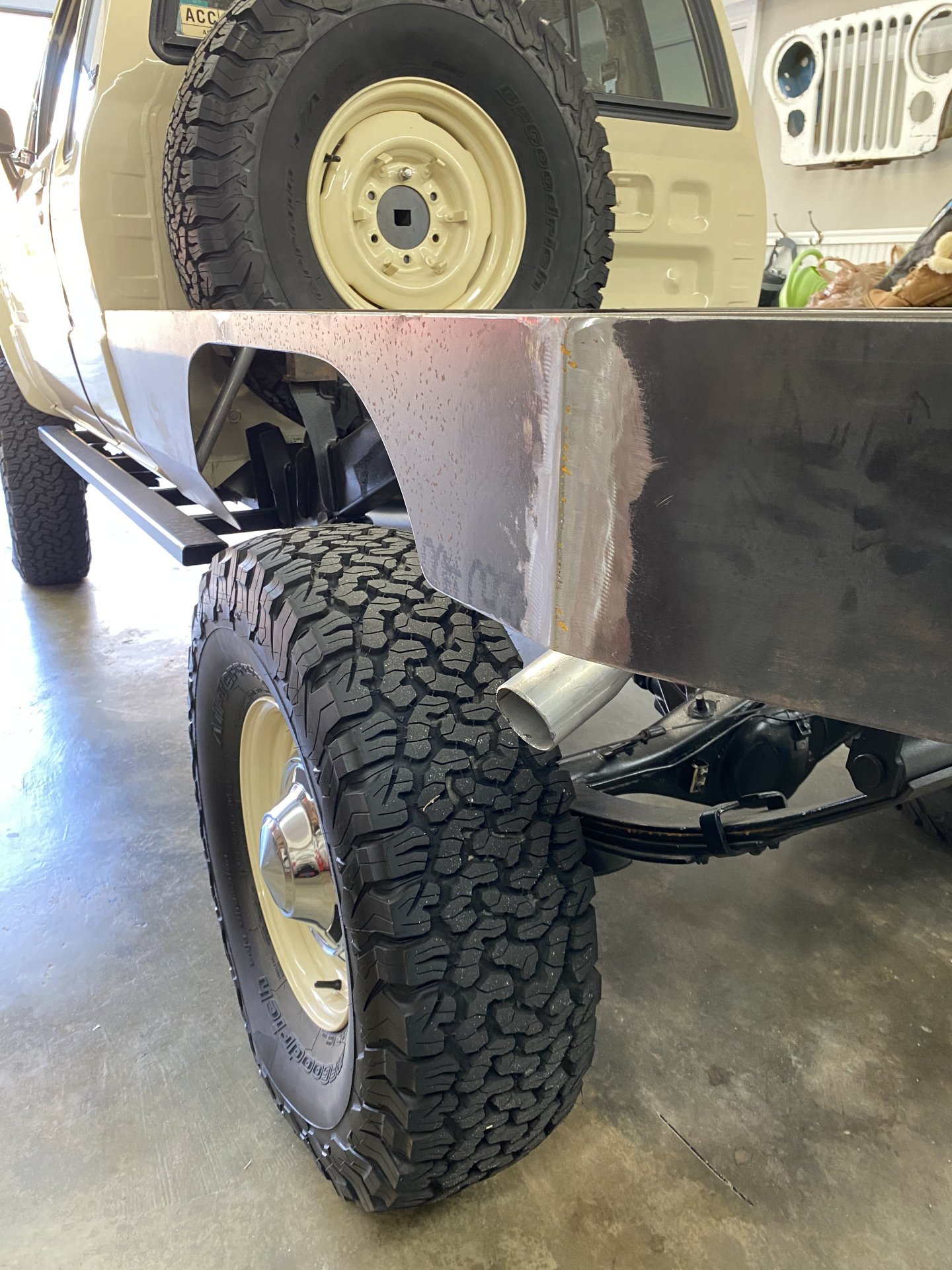 Whats the entire exhaust system? Manifold or header? What cat and muffler?

Kept the O.E. manifold through to and including the O.E. cat. The guy said the cat is in good shape - no need to replace. I suggested a stock muffler. He suggested a Magnaflow - 18" with 2.5" in/outlet reduced to a 2.25" tailpipe. Said the added volume would work to keep the sound down without robbing any power. He said it'd be slightly louder than stock, but not much. From the back of the truck I hear the fan as much as the exhaust.

The truck does not feel any slower. It may be in my head, but it feels little quicker and more responsive. That could absolutely be the result of expecting the truck to feel slower... and it's just unchanged.
T

If you went from needing earplugs to drive it to having a tight and properly muffled exhaust, I'd say you either picked up a blonde C hair of off the line power, or the fact that the exhaust note is more in tune and changing with the RPM of the engine that the tighter and more precise sound correlates to placebo power.

That said, it sounds like you found a good shop!

Yeah, I'm sure it's 99% placebo and 1% better back pressure, etc. Either way - it's 100% better. It's strange to hear the engine/fan while driving and not the exhaust. That led me to hunting for a Hood Insulation - https://forum.ih8mud.com/threads/hood-insulation.1243269/
T

If you "know your vehicle" you can feel a 5ftlbs of torque and or horse power increase. I wouldnt be surprised if you did actually pick up a few ftlbs and noticed it. You'll feel 5hp on the highway, and 5ftlbs off a light. A passenger will never know. But the person driving the vehicle regularly sure will.

Have you looked into a resonator? On both of my vehicles I’ve got stock mufflers, no cats, and resonators. My 22re was super quiet until I put a header in.

Toast said:
High flow magna flow cat. Looks like AAA quality but we will see how it performs.


Where'd you get that and how much?

Cats make pretty good mufflers by themselves. New style cats are not the restrictive parts of old and they do help with air quality. One of the my vehicles has two OEM cats in series, has no muffler at all, dumps right behind the pass front door, and is quiet enough that my wife will drive the truck.
I tried cat only on my 22R and that was too loud, but a Walker Super Turbo quieted it right down. I buy cats from Summit when I build a system.
You must log in or register to reply here.