I decided last week to transplant all my old stereo Equipment from my FJ62 into the new FZJ80. Having done quite a few car stereos in my youth, as a professional car stereo installer, I was not about to pay some one to install my equipment.

So… – after a week of having the truck apart, and several beers..here is a short write-up of the install. 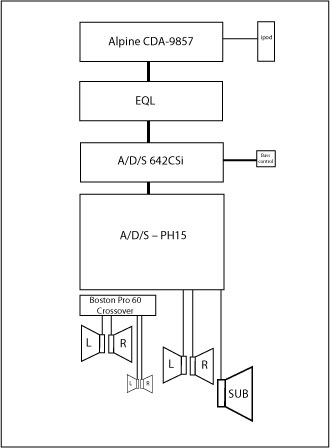 The Alpine Unit went in where the old radio was, not much to say here, removed the dash trim and the radio bolted write up to the existing brackets. – one beer job. 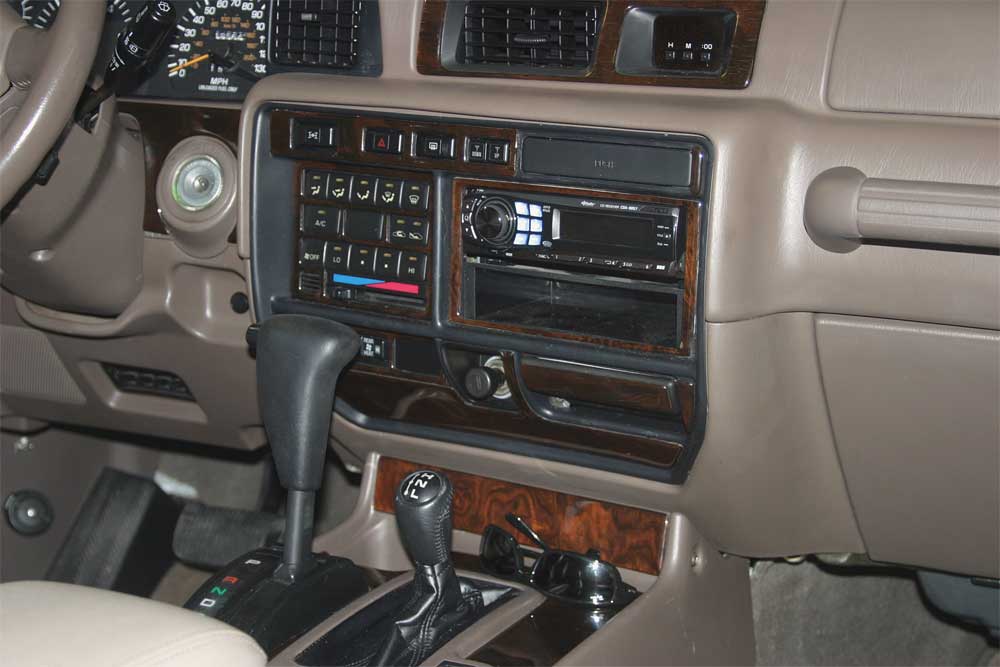 I routed the ipod cable to the glove box – one beer job. 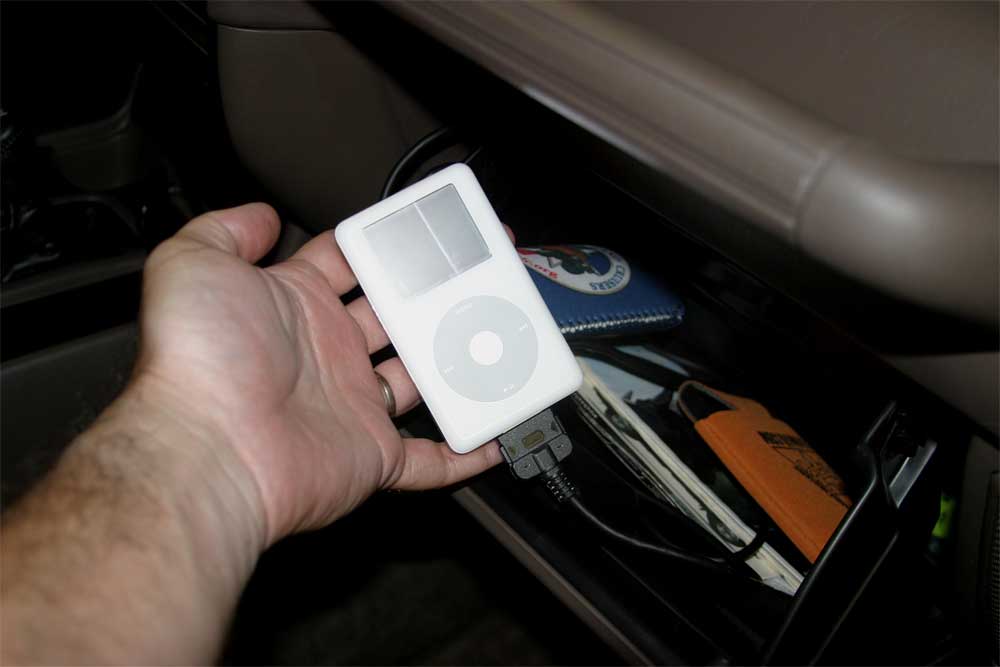 The next step was to wire up the truck. I ran one large power wire to a spot under the center console. I used that fancy car audio wire 2 gauge. From that main power wire , I ran smaller gauge wire to the other components under the two front seats. Of course it all fused and grounded to one main ground. – another beer.

In car audio – everything must be grounded to one point. Even the Head unit has a ground wire running back to the same point as the amps and crossover. This eliminates ground loops in your system, if you have ground loops – you might get the annoying buzz – or whine, thru your speakers. You might never get this noise, but why risk it? So..everything gets a common ground.

Then I ran all the speaker cables, and control cables for the remote Bass control that in the center console. The knob on the drivers side is the Bass control, and the button on the passenger side is the garage door opener, that is hidden in the dash.

Under the drivers seat I installed the EQL and the A/D/S 642 CSI. 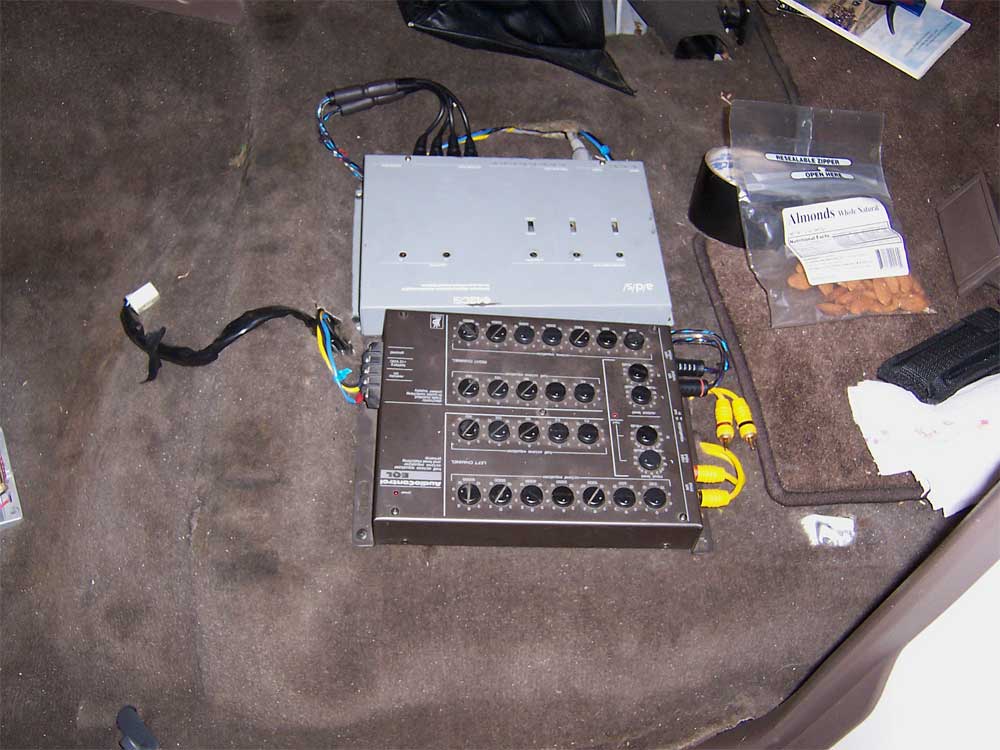 Under the passenger seat I installed the A/D/S PH15. Iam running this amp in 5-channel mode. This way the Subwoofer receives a mono 100watt signal for rear view mirror shaking bass.

I sacrificed the read heater for this. Living in Austin, Texas – our winters our mild and I won’t miss the rear heat. (Sorry, no pictures, I forgot to take one.) Pulling the rear heater was easy, I just cut the hoses and unbolted the unit. I then connected the two hard heater lines to each other with a couple of clamps and a piece of flexible heater hose. Then I made a plate to cover the hole in the floor, screwed it to the floor board, and sealed it up with silicone. – two more beers.

Why did I not place the amp in the rear area where the factory sub is? I have plans to use that for cargo area as well as my powerinverter. 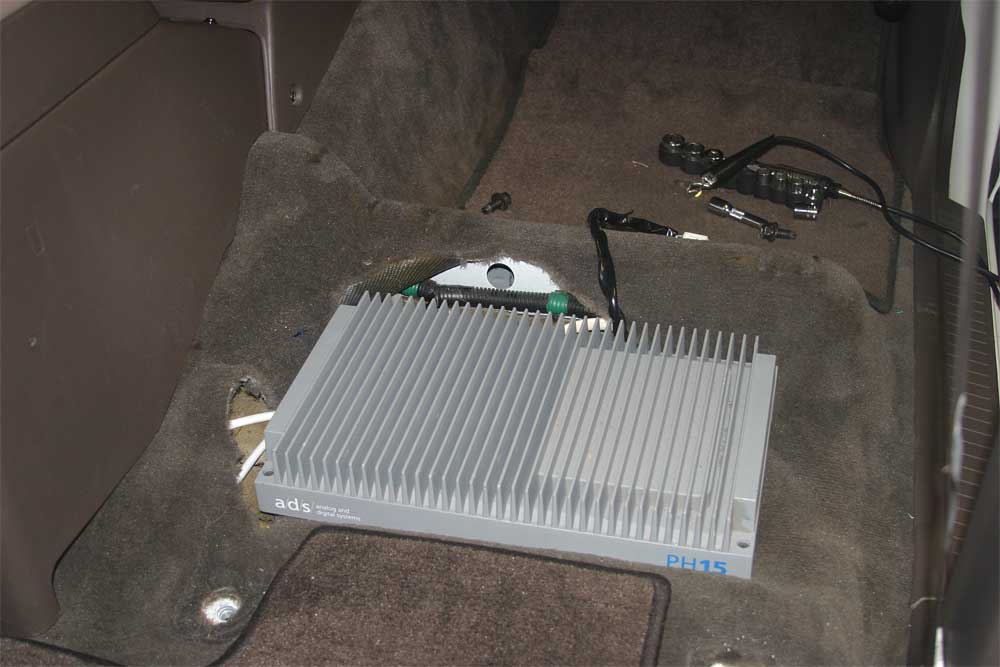 Moving on to the front speakers. To be able to fit 6.5” speakers in the doors, I build one inch spacer rings out of birch wood, and used grey paint to match the speakers. 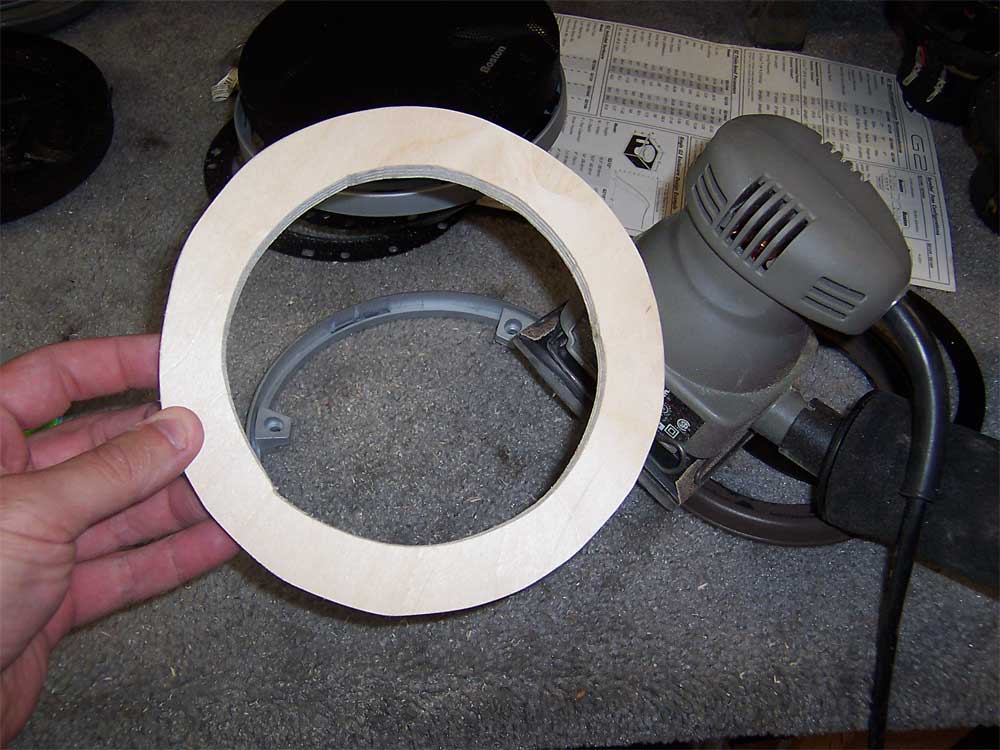 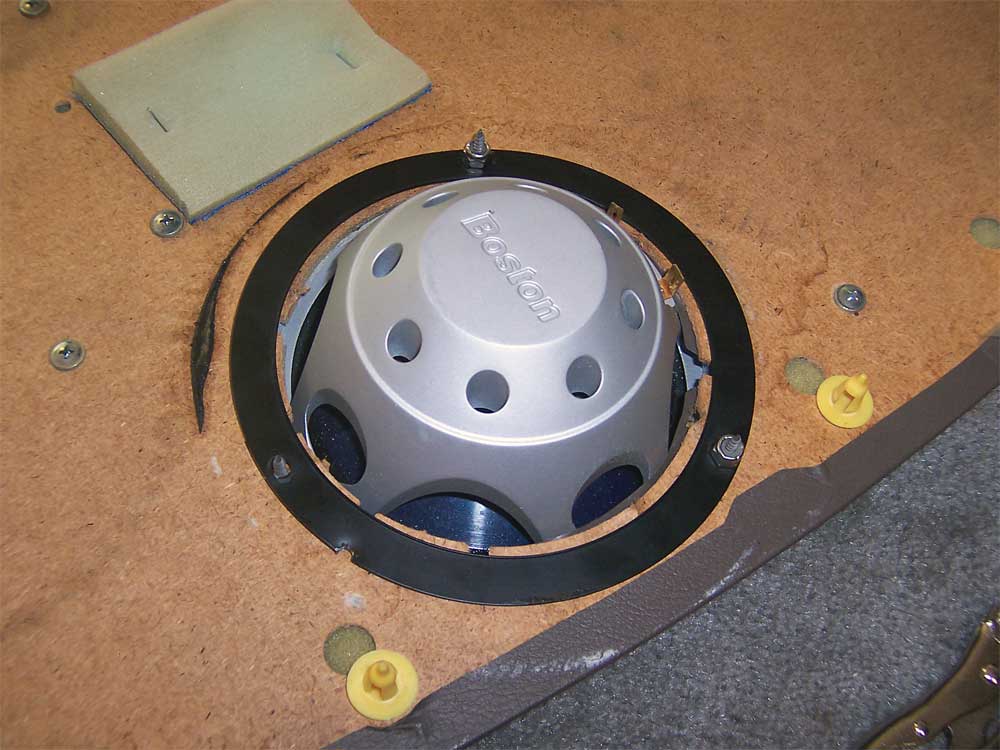 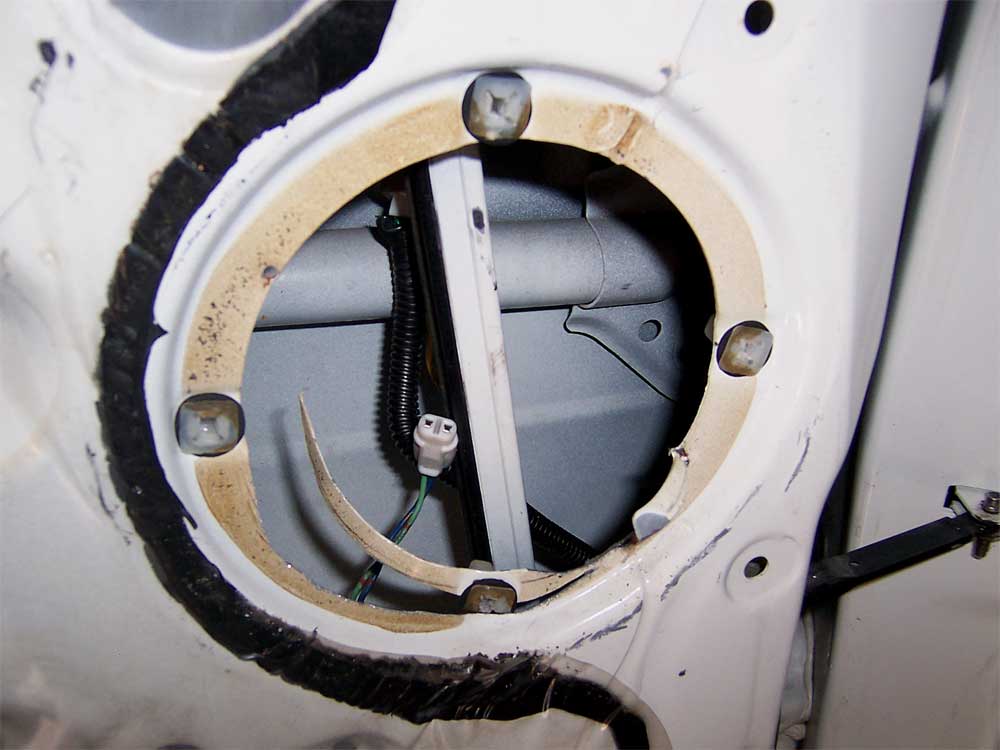 The crossovers are very large for the Pro60’s so I stuffed one crossover in the space used for the factory speaker, and the other is under the middle console. 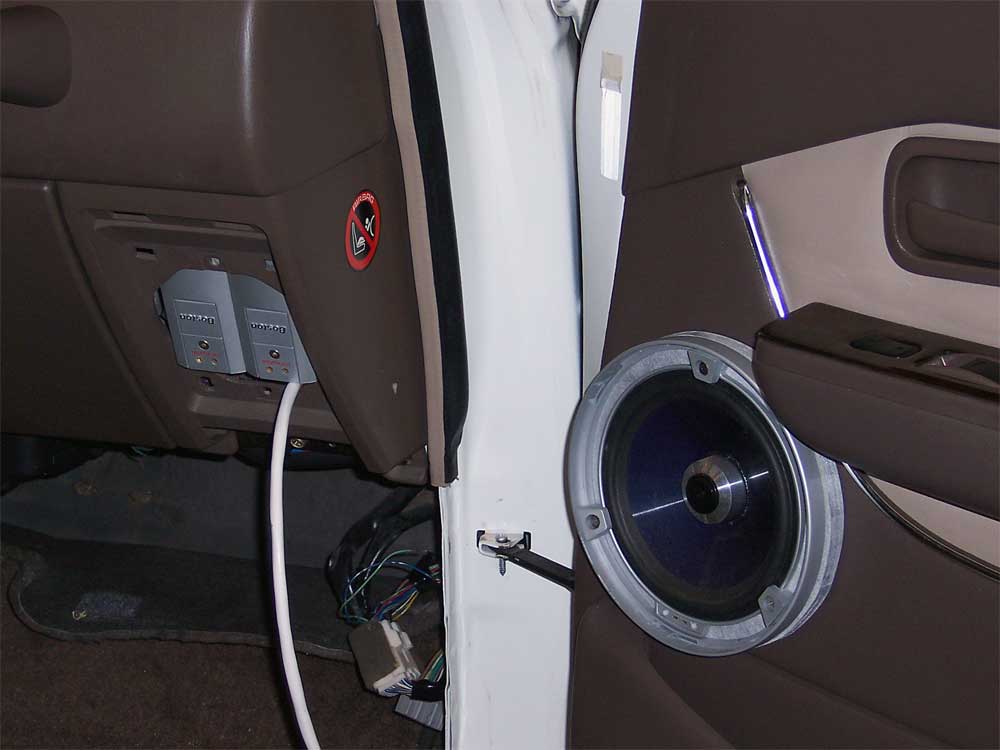 I then trimmed down the speaker grills and glued them on using silicone to the to the plastic trim rings. – three beers 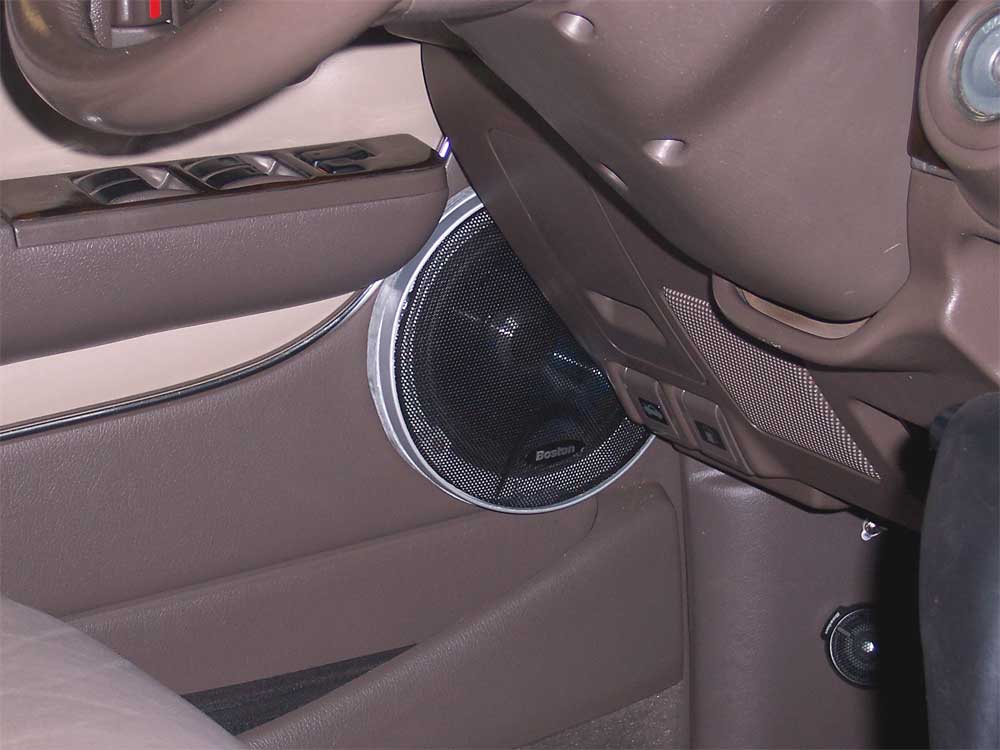 I then mounted the tweeters in the front kick panels. I like the placement of the tweeters there because it gives a incredible front staging and great imaging. I have done this in the last four cars, and have yet to have anyone, or myself kick a tweeter with there foot. 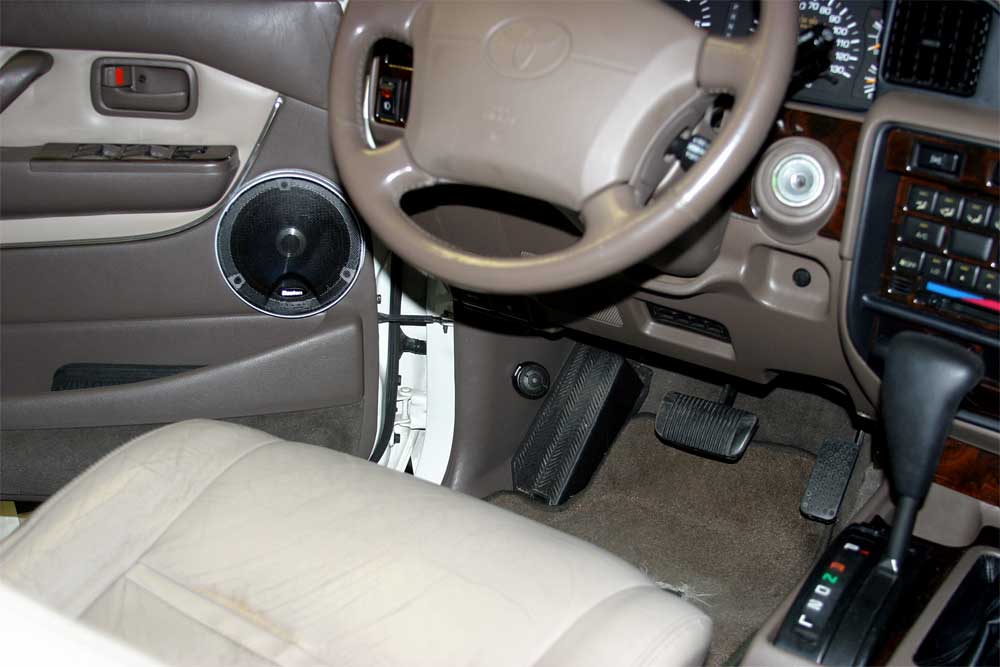 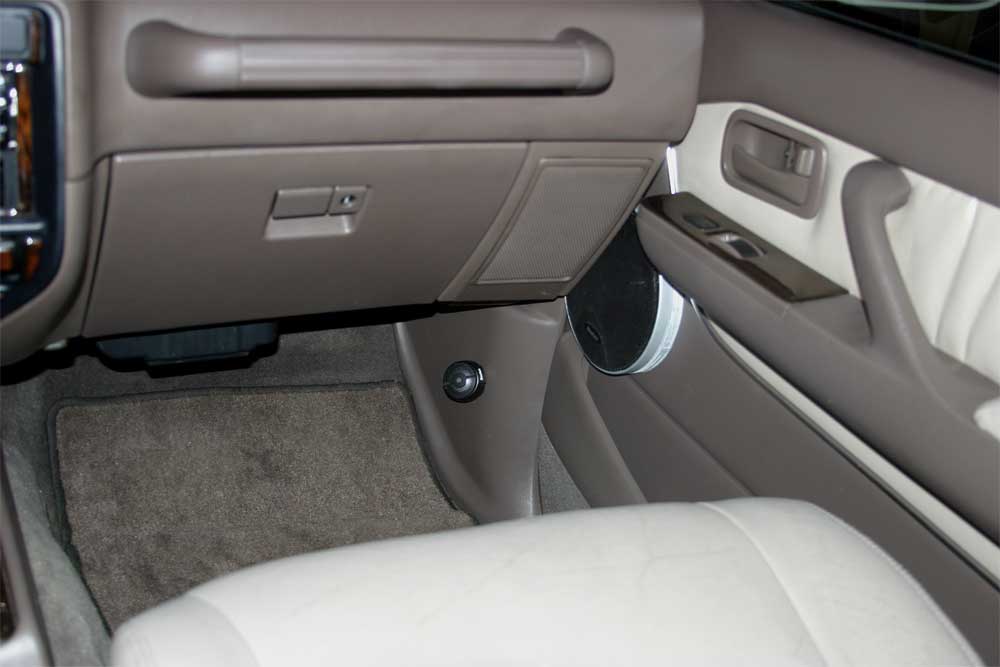 As for the back speakers – same process, but no trimming of the speaker grill was needed. – half a beer. 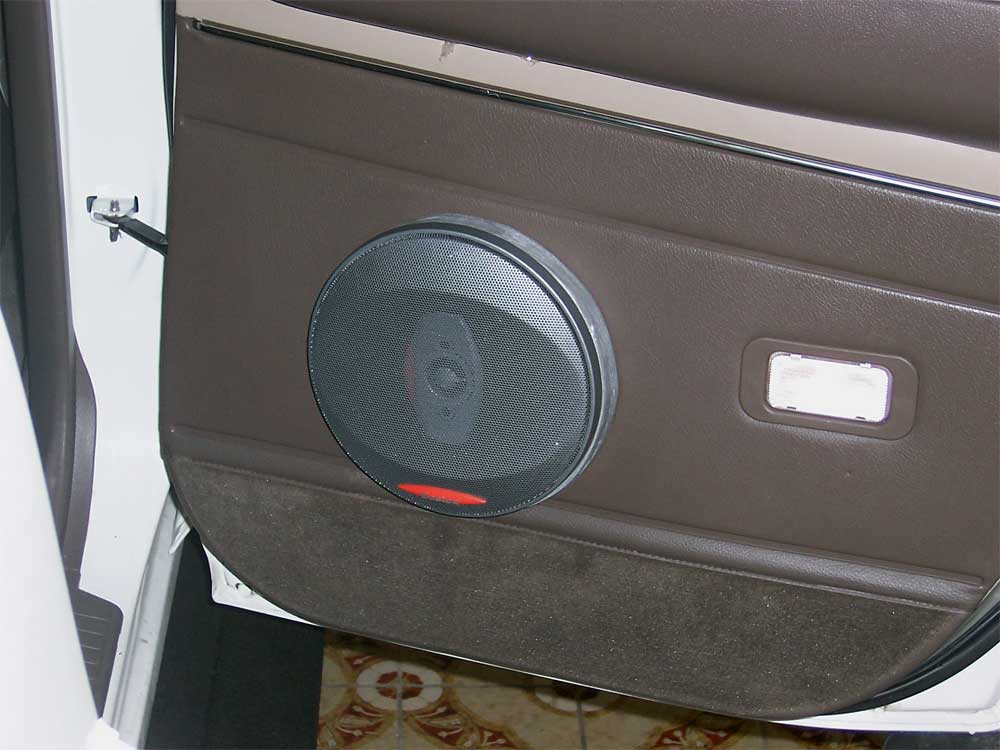 Then it was time for the subwoofer. I placed the box in the back, and hooked up the wires. ☺ Iam just using the old box from my FJ62, when I tackle the rear of the truck to install my Norcold and power inverter, I ‘ll build a new sub box. That will be “Part II”. 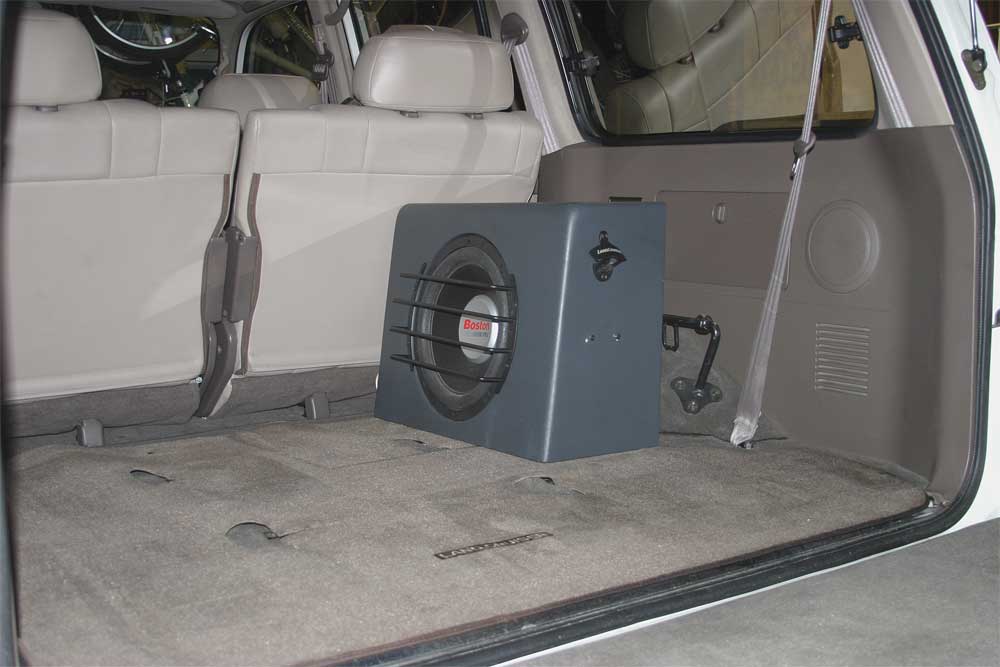 Once everything was installed, I tuned they system with a Real Time Analyzer and SPL Meter. This was done at my friend’s car stereo shop. To tune a car using a RTA, you set up microphones in the car, then play a CD of white noise that the RTA use to analyze the system.What is a RTA?

Then use your equalizer to tune the system so it is flat, and also sounds to your ear.

My goal was not going for a loud system, but just a nice sounding accurate one. I listen to a very wide variety of music, and wanted a system that could perform for all types of music.

So there you have it! Hope someone find this information useful.
C

Visit site
Nice install, that is the type of system I always liked, but nobody seems to do anymore.

Visit site
Thats a great install. I have a real hard time paying anyone to do the car audio stuff, nobody seems to take the care that you would on your own rig.

The only problem I see is that you lagged alittle on the beer consumtion. I plan on tackling my 40 as soon as I get my family cage.

Visit site
Nice setup.
I have 12" sub just waiting on me to make a box.
Want to stuff it in the passenger side but waiting on inspiration.
I think I just need more beer.

fzj80kidpen said:
Nice setup.
I have 12" sub just waiting on me to make a box.
Want to stuff it in the passenger side but waiting on inspiration.
I think I just need more beer.
Click to expand...


working on a 10" in the rear passenger side fiberglasses and flushed hopefully sometime this summer when I have some time.

Visit site
That's a good looking installation. I like the tweeters in the kick panels -- I did the same thing in my Altima and will do that in the Cruiser sometime this summer.

I had not planned to install the system my self, I was willing to pay someone, but when I went to a few local stereo shops, the sales people and installers kept telling me just to purchased other speakers that would fit.

At one point I even left a front door speaker with a shop to see if he could make a 1" spacer ring. That afternoon I came back to pick up the ring, and he had made it too small. How the hell do you screw up making a ring, when I left you the speaker and grill to mesure with???

At that point - I just decided to do it my self!

Visit site
Guess I'm a little spoiled that I can get my stuff installed for a 6-pack of good beer Looks great Mark - got me thinking about that amp upgrade now ... can't wait to hear yours!

hummm..did I ever collect on that 6 pack??
S

Visit site
Nice work, I was expecting crap when I first saw the post.. Maybe some JL Audio or something like that.. A/D/S though, very nice.. I run a Zed Audio amp on my end with Type-Rs and I love it.. Was trying to stay low cost but still high end....

Visit site
Nice job! Nothing like some good tunes while tooling around in your mean machine.
How bout wires? I know for my home set up wires make a major difference.

In my 80's system I used high level interconnects but went cheap for speaker wires. Now I regreat doing that. Whats your spin?

I use http://www.parts-express.com/ for wire and installation tools, and supplies.

My spin is this...Just use a high quality cable that won't corrode on you, you are doing such short runs from the amplifier to the speakers, that 14 GA is fine.
N

Visit site
When you were talking about grounding i am a little confused on your common ground theory. Did you run your ground solely to a common block? Because if you did then some of them are undoubtably longer than 18 inches. Being MECP certified and having installed for years I don't recommend that setup. While you are correct in that a common grounding block is essential in combatting noise problems, I, and everybody I've worked with, use an Auxiliary ground to do this while always having a primary ground within 18 inches. This gives you the protection of a short chassis ground still eliminates the noise problems. if you haven't already I would install primary grounds within 18 inches of each component to supplement your common ground.

sonoranfun said:
Nice work, I was expecting crap when I first saw the post.. Maybe some JL Audio or something like that.. A/D/S though, very nice.. I run a Zed Audio amp on my end with Type-Rs and I love it.. Was trying to stay low cost but still high end....
Click to expand...

@ Blindman..
yes your right, thanks for the input, I did add a ground, like you suggested, if forgot to do that. For the radio I had already done that, as well as run a wire to the same ground as the amps. I had no ground loop noise, but had to pull the seats out for another reason, so I added that ground like you suggested.

Good to have a MECP person on the board to answer audio questions!
I wish they would of had that type of certification program back when I worked in car audio..but that was almost 20 years ago!!

For those who don't know what MECP is "Mobile electronics Certified Profile" http://www.mecp.com
N

mmw68 said:
@ Blindman..
yes your right, thanks for the input, I did add a ground, like you suggested, if forgot to do that. For the radio I had already done that, as well as run a wire to the same ground as the amps. I had no ground loop noise, but had to pull the seats out for another reason, so I added that ground like you suggested.

Good to have a MECP person on the board to answer audio questions!
I wish they would of had that type of certification program back when I worked in car audio..but that was almost 20 years ago!!

For those who don't know what MECP is "Mobile electronics Certified Profile" http://www.mecp.com
Click to expand...


I feel bad about doing this after you built it up so much, but MECP really doesn't mean crap. I know guys who've been installing 20+ years who couldn't pass the MECP test without the MECP book, but are MUCH more qualified than me. The MECP test is really more about book-learning rather than actual knowledge.(I actually got a higher score than the guy who was training me because i studied the book.)

My guess is that MECP makes a fair chunk of change off selling these books. http://www.mecp.com/study_guides.asp $25
1

however i am not a big fan of the tweeters on the kick panels. I would rather have them up top.