Here is yet another post asking what my FJ40 is worth.

I don’t use it enough unfortunately here in northern Minnesota. Plus the dedicated overland/camping rig is the 4 door Tacoma

It’s a lengthy post explaining my thought process when “restoring” this FJ40. So pour a cup of java or crack open your favorite adult beverage.

It is a 1977 originally from Arizona, purchased and trucked up here in April, 2003. When I received It wasn’t running but came with a Man-a-fre lift with anti inversion shackles, an auxiliary fuel tank (with riveted door) from Con-ferr, and large tires. The exterior was white and the interior a mocha color.

After having the carb rebuilt and the exhaust leaks addressed with the header, I added a small cap distributor from a 60 series. I sold the large wide tires on their rims and went with the stock steelies and 33x10.5x15 BFG’s.

I had a friend fix the one spot of rust on the tub on the rear seal with new metal and also had him weld in an OEM fuel door for the aux tank. I drove it as is for a summer.

Not wanting to go down a deep rabbit hole I chose to do a frame on restoration. My plan was to use the 40 as on off road overland vehicle. To be used, not abused. So I disassembled the body panels and brought all the parts to a guy to get painted mustard yellow. At this time I also purchased a couple aftermarket front fenders (the only non original steel on the 40).

While that was being done I reupholstered the OEM seats. For the jump seats I used a set from a prior 1979 that I had which I prefer due to the leg supports.

I also bought a couple pallets of goodies from Jeremiah Proffitt. On the pallets were the front bumper/brush guard, the rocker and front fender protection, and the front cage kit that is welded to a stock roll bar. On the front end is a period correct Warn 8274 with synthetic line and poly rollers.

All the extra protection, including a rear tube bumper with added elbows to protect the rear quarters, were powder coated for durability.

After getting the rolling tub back I went to my local Line-X dealer and had the interior professionally sprayed. Once again my plan was long term use including trips out west, where with use a painted floor would just get abused and heavily scratched.

Since I live in the rust belt I new I would never drive it in the winter, so my plan was to always run without the hard top. But still needing some protection from the elements I went with a STC soft top with 2 piece soft doors. The top had recently received a great review in Toyota Trails and the more stock looking ones were just coming onto the market from Pakistan. At the rear is a simple panel where the ambulance doors would normally be.

The soft doors and zip in windows have been used a handful of times, essentially new and laying flat in the box.

All the hard top pieces (front and ambulance doors, upper quarters, and fiberglass top) were painted and reassembled but never put back on the 40.

So keeping up with the plan for this rig to be used on trails I also added a rear locker (Powertrax) and did the rear disc brake conversion. I re-plumbed the aux tank with a stock sending unit, with a flip of a switch on the dash the mechanical pump pulls from either tank with the fuel gauge reading each tank independently. Both fuel doors are keyed the same.

In the spreader bars of the roll cage is a Cobra CB, which was considered at the time essential equipment for a group trail ride. In the unmolested radio slot is a receiver with speakers mounted to the roll bar behind the driver and passenger headrests. Once again at the time a decent option. Now I would just use a bluetooth speaker and remove those speakers and radio.

For secure storage with a soft top I also put a lock on the glove box door that is matched to the Con-ferr center console and a MagLite mount. For additional secure storage I added a military box behind the seats. There wasn’t a rear heater in the rig when I purchased it and with only summer use here I wasn’t going to need one either. The holes on the top of the rear fenders were already there from a PO, the L brackets were Plasti-dipped to protect the paint and the box is suspended off the tub floor.

On the dash I added a 4Runner altimeter/inclinometer that is wired and can be seen at night.

I started acquiring parts to install the mini truck power steering such as the gear box and shaft, plus the Dory brackets. These will go with the 40.

Also coming (or at least optional) with the FJ40 is an original 1967 M416 color matched trailer. All part of the plan for an overland rig set up to go exploring. It has the original pintle, working landing leg and hand brake, etc. Original lights with upgraded LED’s and “mule” red lenses for better visibility. All new wiring ran through the frame, The rims are painted to match the 40 wheels and have new tubes and tires. It also comes with a spare wheel and tire, the original data plates and blank data plates for customization.

Back to the 40. If one wanted a stock looking rig all the extra protection can be unbolted. One would need to source a front bumper and rear bumperettes. An extra stock roll bar will come with along with a rear heater. If you want a different glove box door I could swap that out as well. A new dash pad would be nice (this has one significant crack). The white fiberglass top has automotive grey carpeting instead of the correct perforated OEM liner.

I’ve got a ton of manuals that will go with it. New LED bulbs for the instrument cluster (all the gauges work). Four new hubcaps for the stock steel wheels. The little inspection light is in the glove box. The gas tank cover to go under the passenger seat. A new Old Man Emu steering stabilizer. I’m sure I am forgetting a few other items.

The 40 has the typical oil leaks and will need some mechanical work such as tie rod ends, etc. But it starts every spring and gets driven here around town to the local pub or lunch date. As all 40’s do it garners lots of lookers and compliments.

Both the FJ40 and the M416 trailer have clear MN titles. I would prefer to sell as a package. 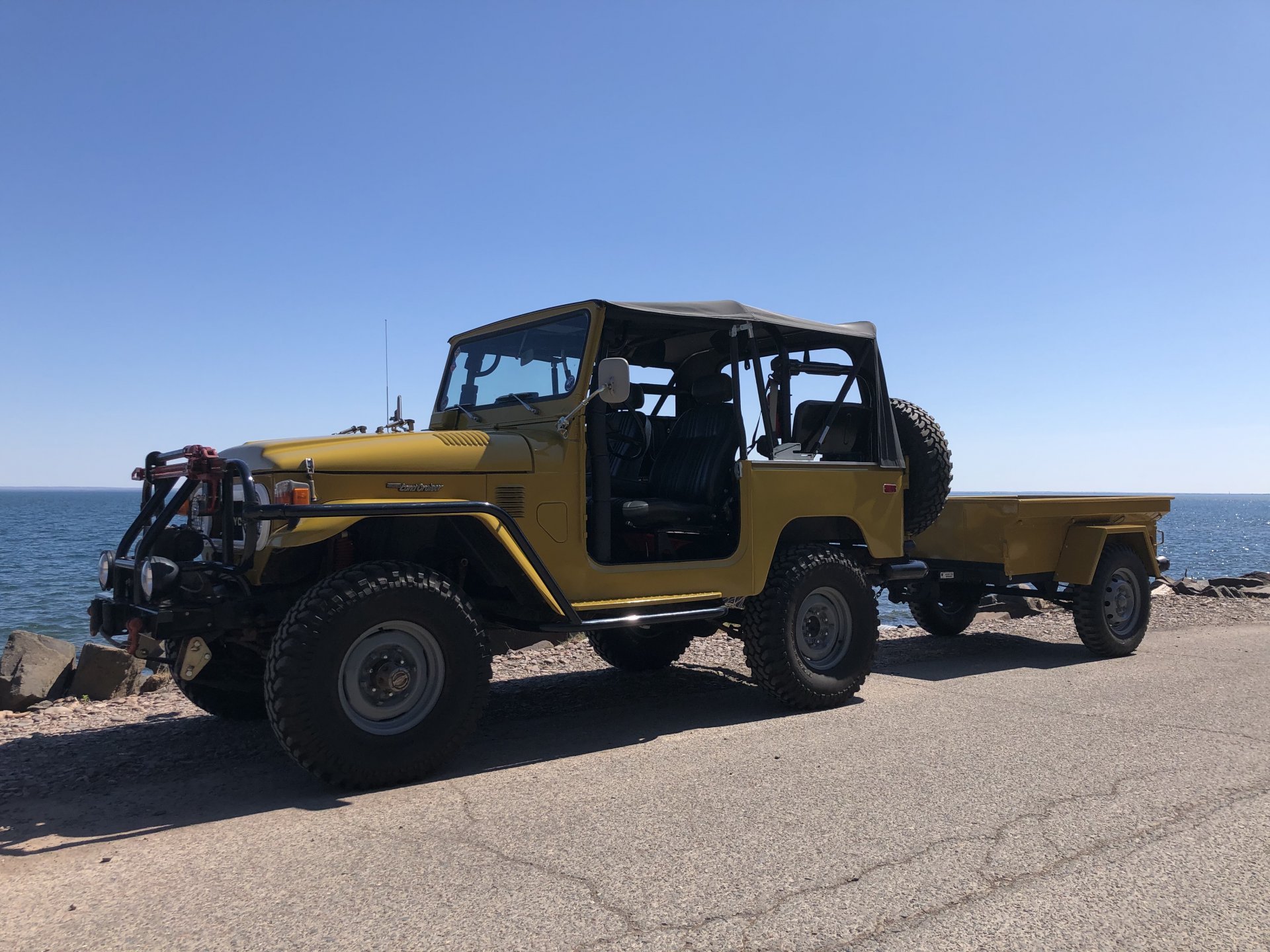 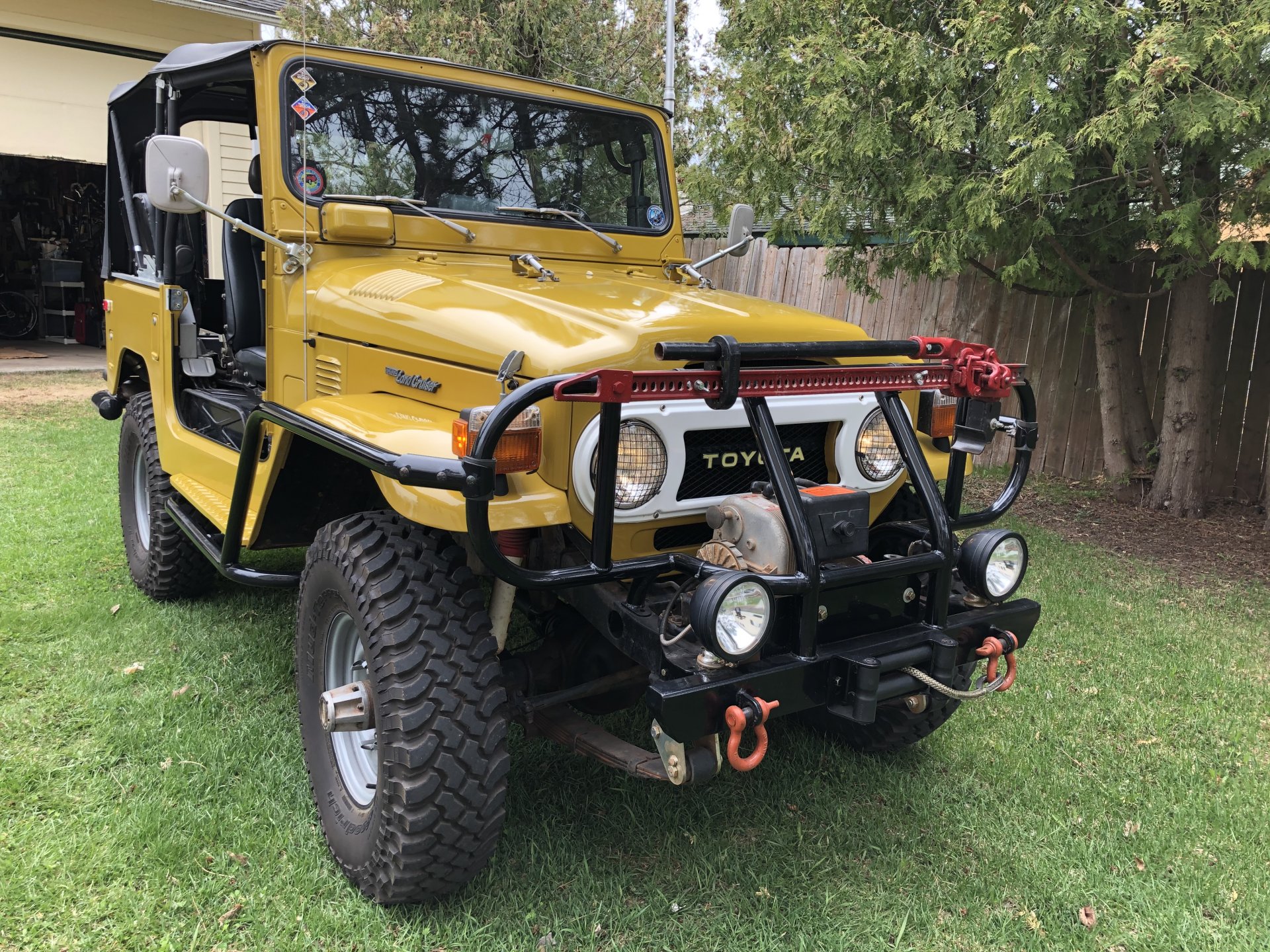 If you are serious, one way is to list it on "bring a trailer" , with your reserve price. If it does not make reserve, you will at least feel the market.

You mentioned you have the "white fiberglass top" Do you still have the hard sides and rear ambulance doors?

Yes, The complete hard top and all four doors are rust free and painted mustard.

It is listed in my ramblings in my original post. Obviously a couple pics of these wouldn't hurt.

Also another stock roll bar if one wanted to run the hardtop. 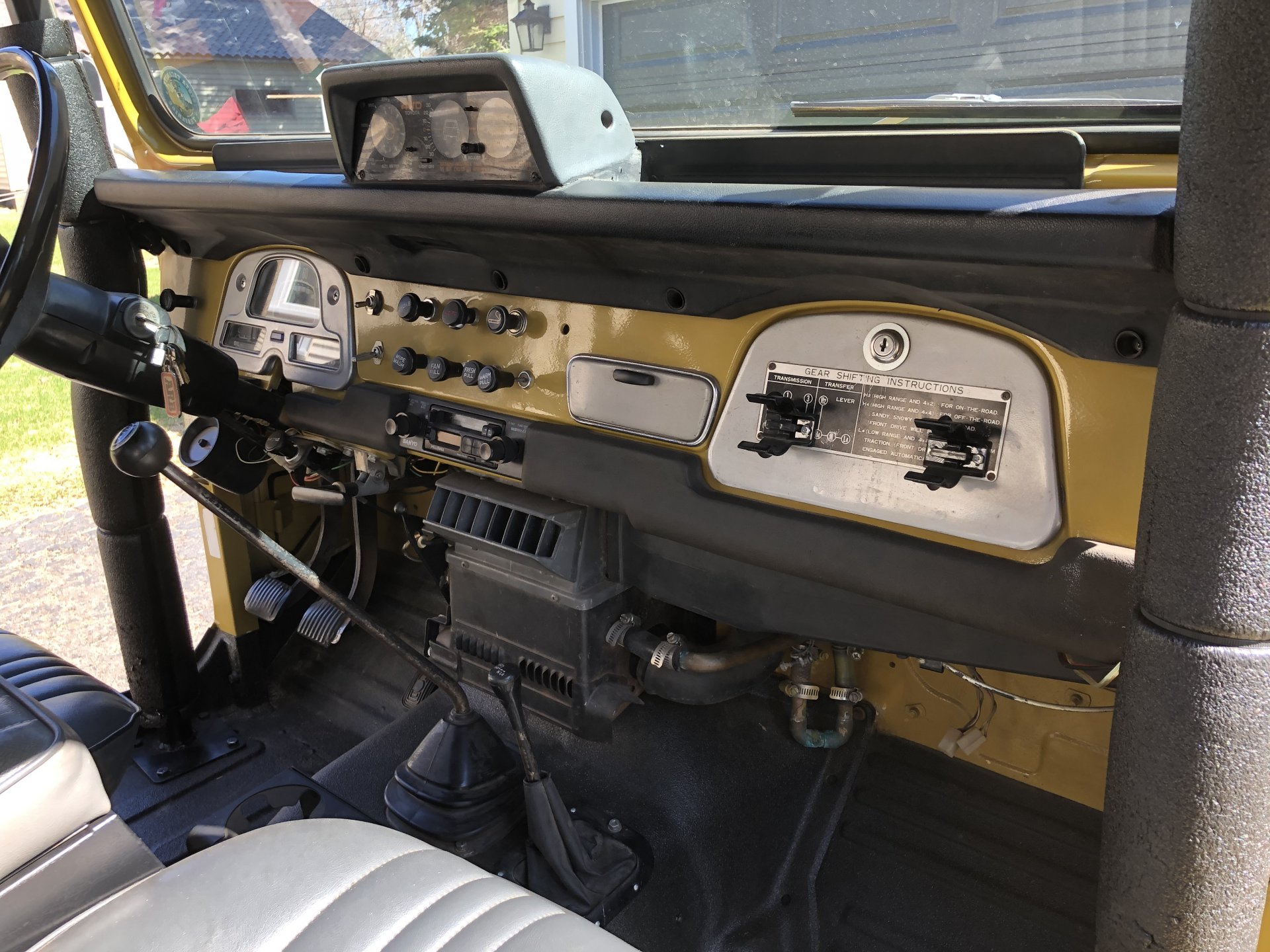 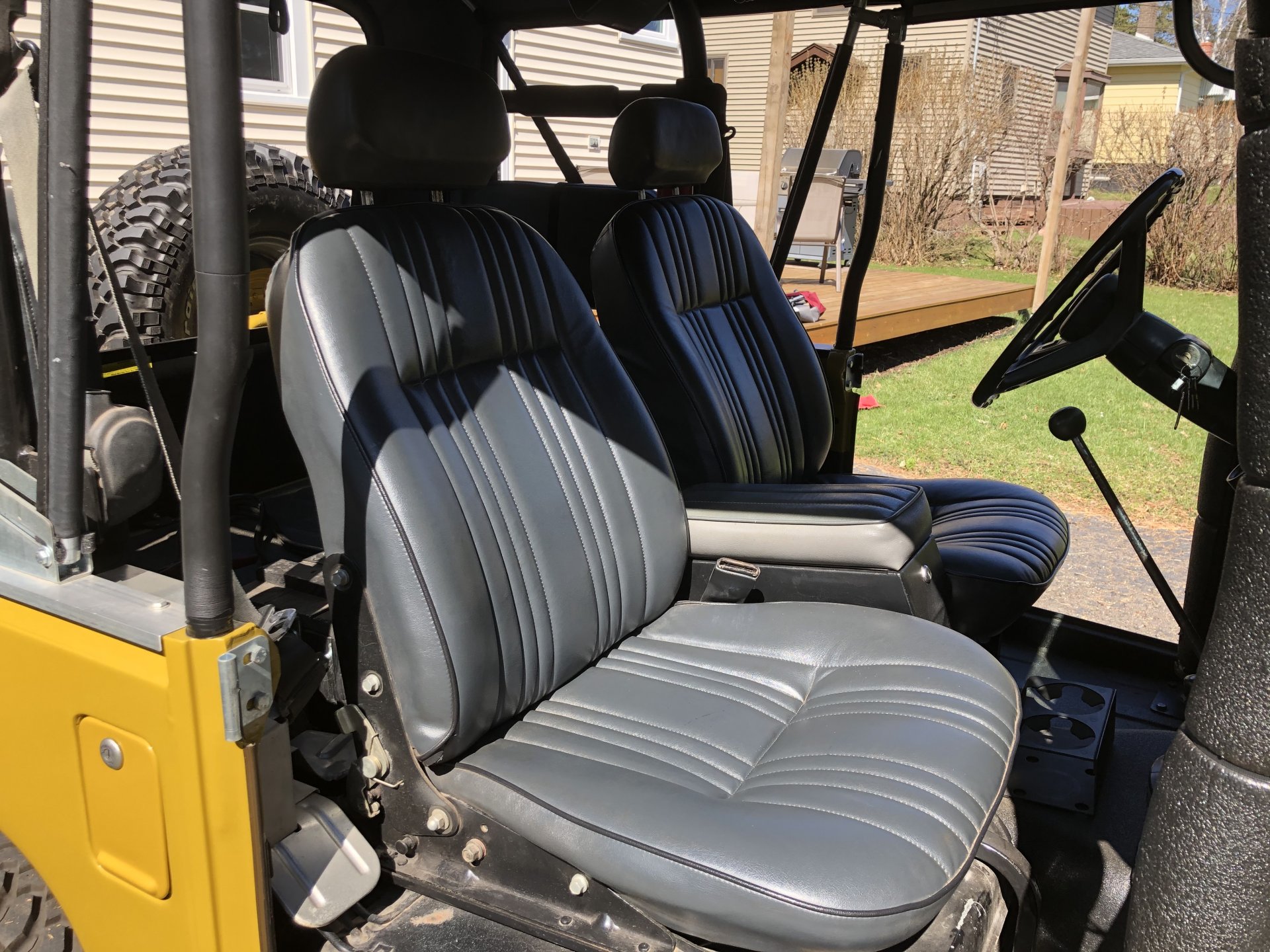 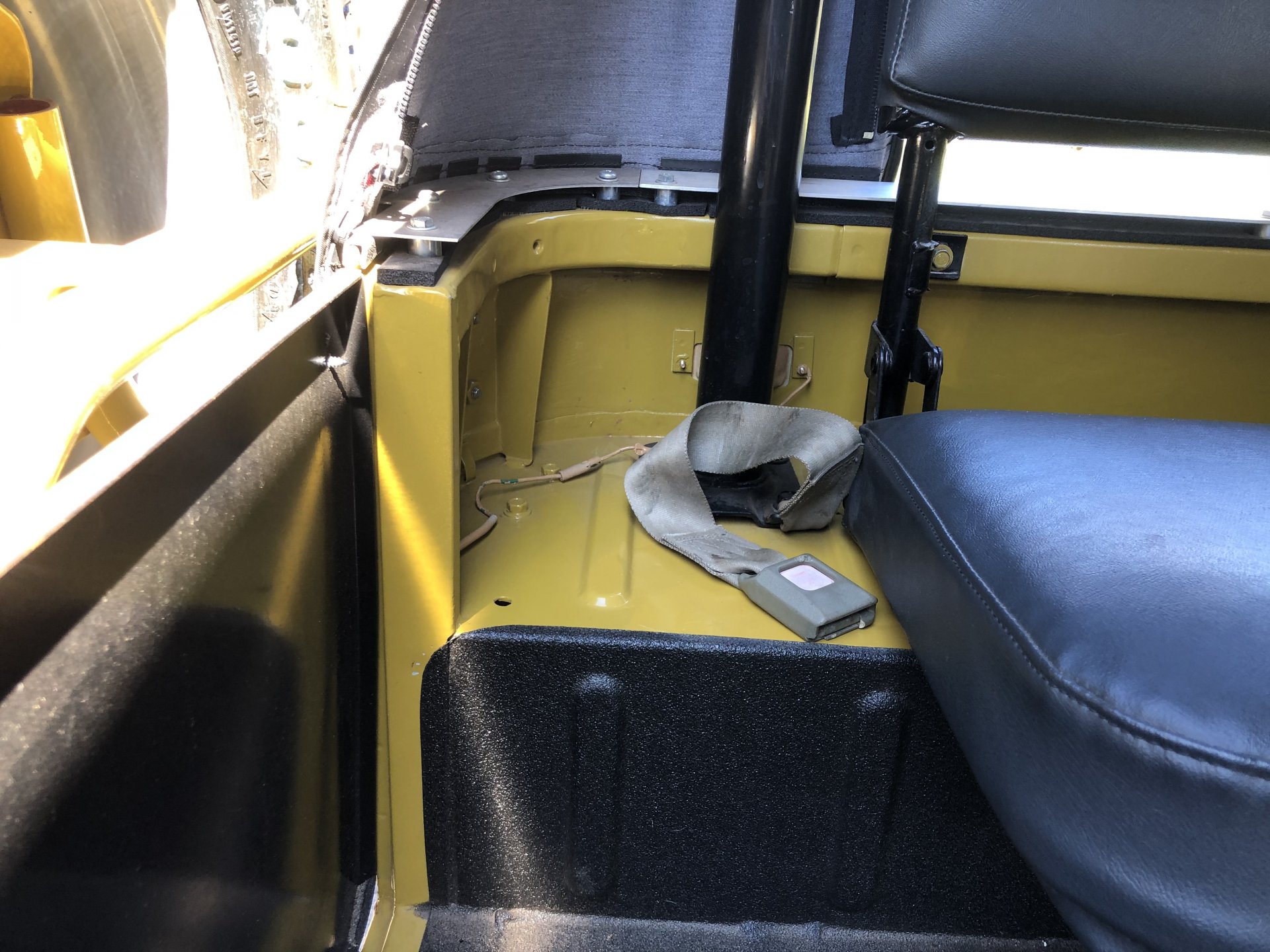 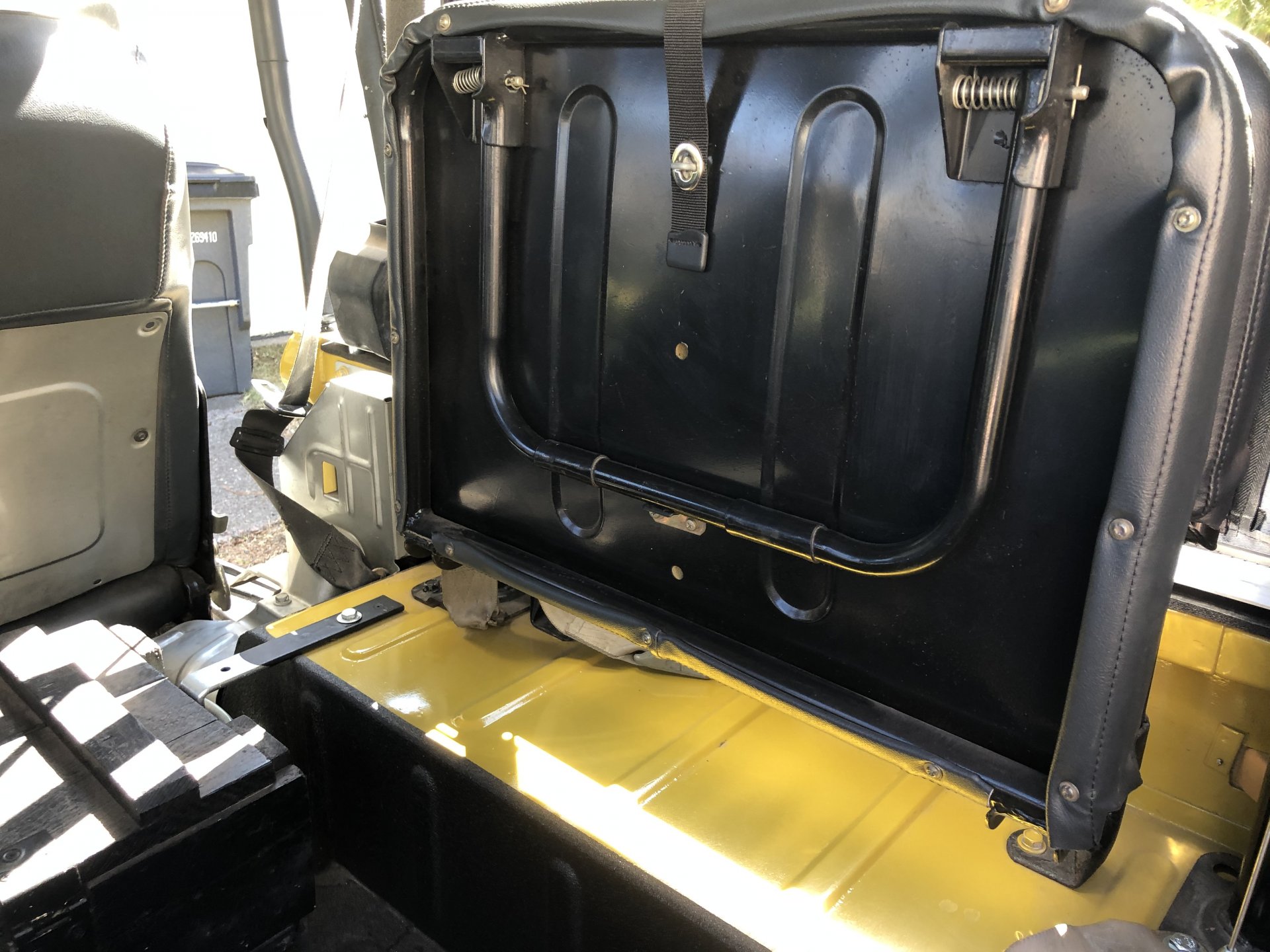 I saw one similar at auction sell for 16k without a trailer last year. I would say 20 to 25k. It's a fairly unpredictable market right now. How is the gas tank bolted down? I see its missing the cover.

I replaced a fuel line last year and sourced a better tank cover at the same time. Just haven't bothered to replace/paint it yet. The 40 gets little use as is right now. Going out for an afternoon lunch ride or a trip to the local brewery.

Would the 40 garner more interest or perceived value if the hard top was on?

100% yes. I speak for myself, but the white roof and wrap around rear windows are huge parts of the iconic fj40 look. When I see a for sale listing without a hard top (and the truck didn't come with a factory soft top), I assume it has rusted out and been disposed off. It has a big impact on value for me. If you list it, definitely put the hard top on.

And I agree- put it on being a trailer with a reserve. The rest of us are just non-paying speculators.

Pierps said:
100% yes. I speak for myself, but the white roof and wrap around rear windows are huge parts of the iconic fj40 look. When I see a for sale listing without a hard top (and the truck didn't come with a factory soft top), I assume it has rusted out and been disposed off. It has a big impact on value for me. If you list it, definitely put the hard top on.

And I agree- put it on being a trailer with a reserve. The rest of us are just non-paying speculators.

I also see a nice stock hardtop adding value as well. Very nice setup you have there sir. If I might ask is it the 532 single stage paint?

It has been awhile since the paint job but single stage sounds correct.

Regarding the iconic look of the hardtop, is it necessary to install or just knowing it is there with pics enough? Would prefer to leave it as is since this is the way to enjoy the Cruiser during the summer months here in Minnesota. 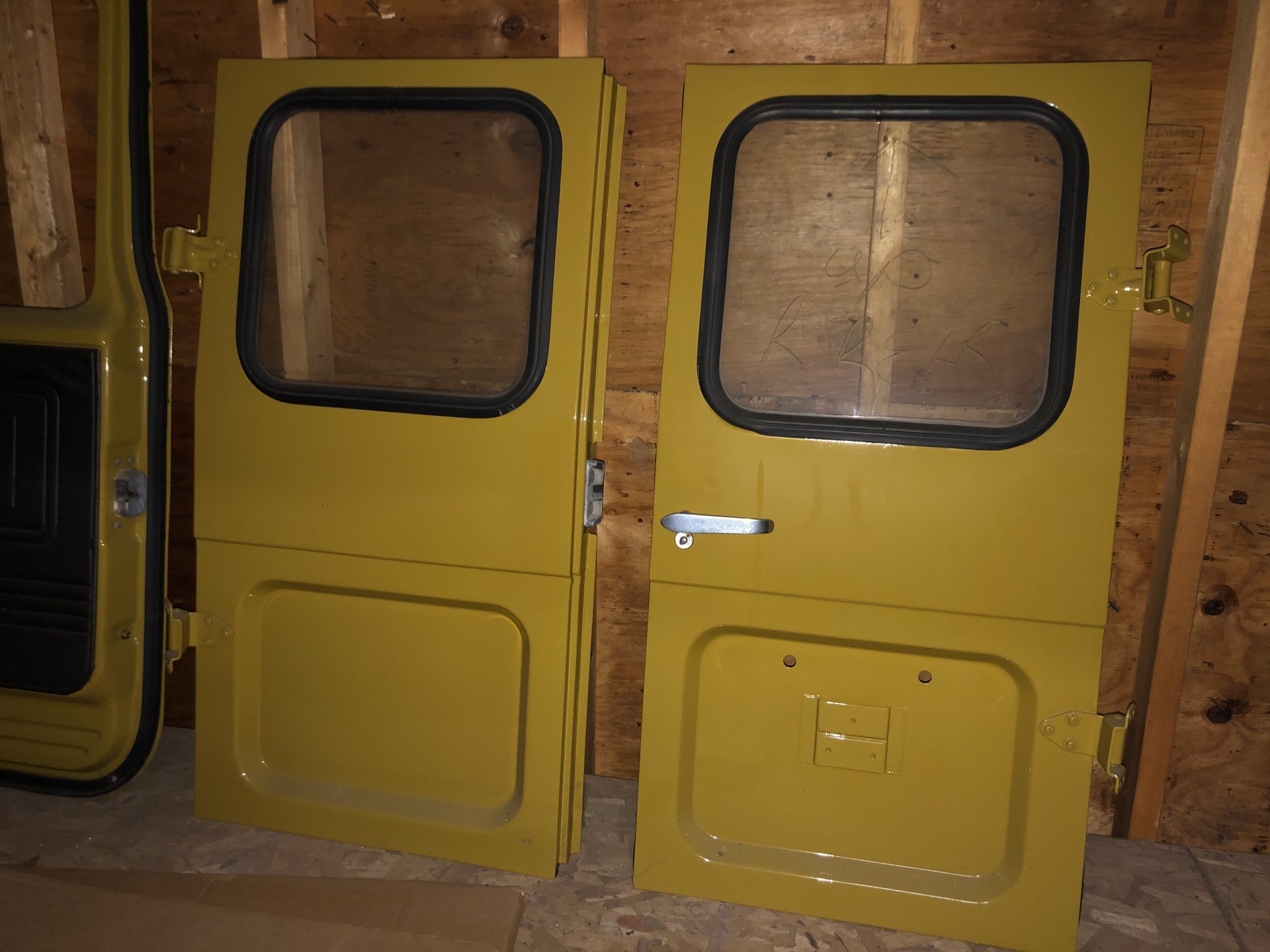 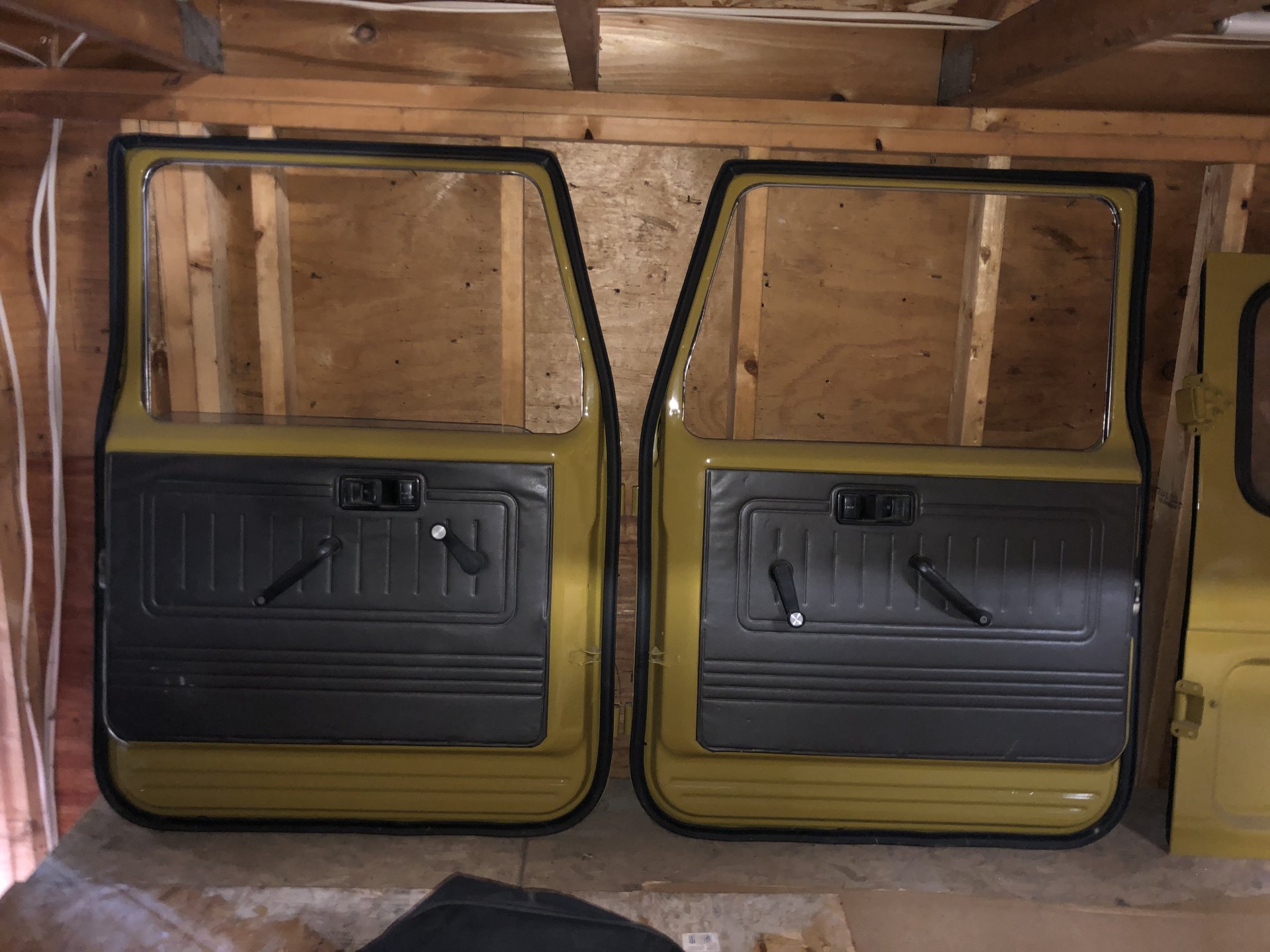 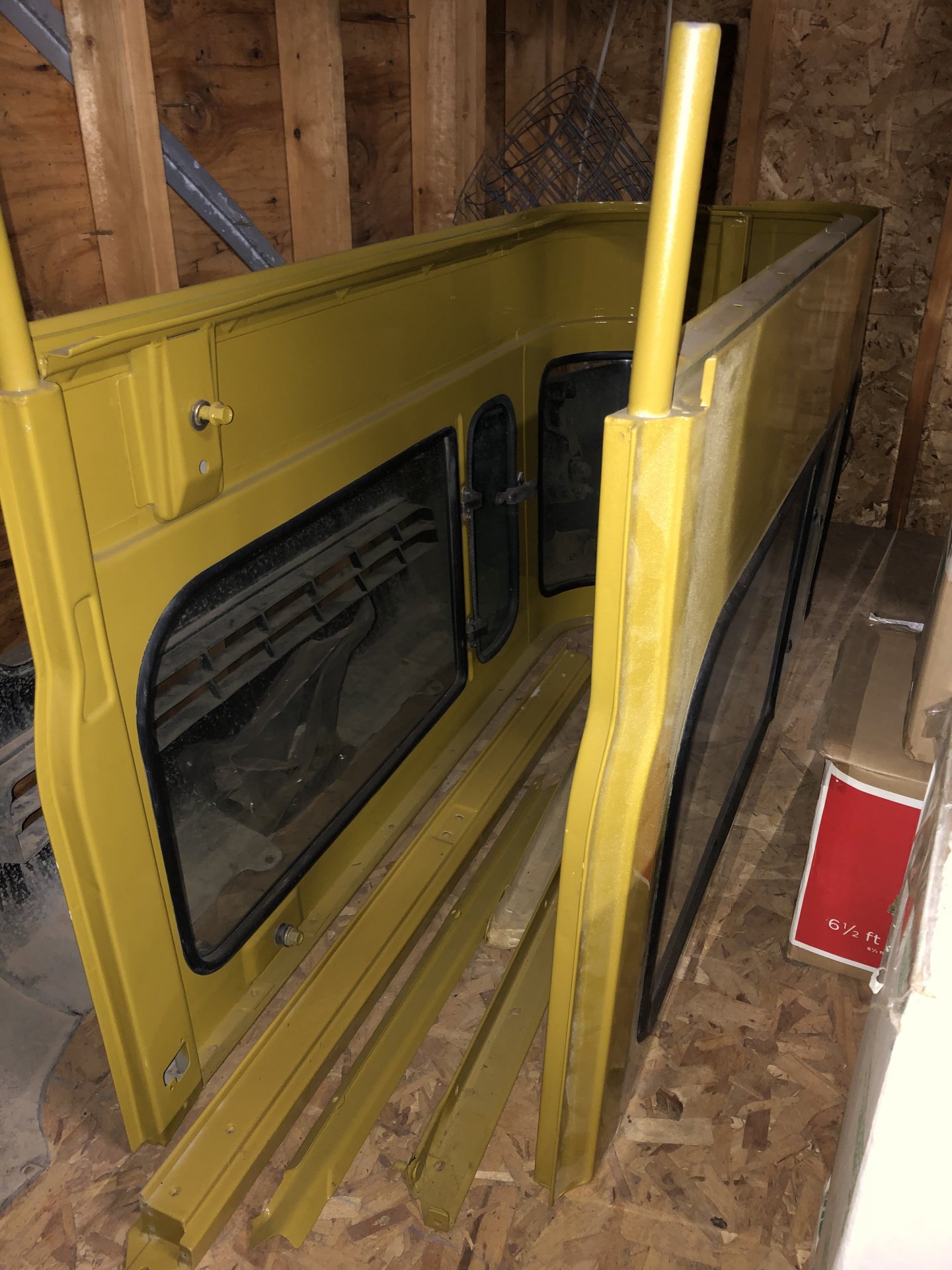 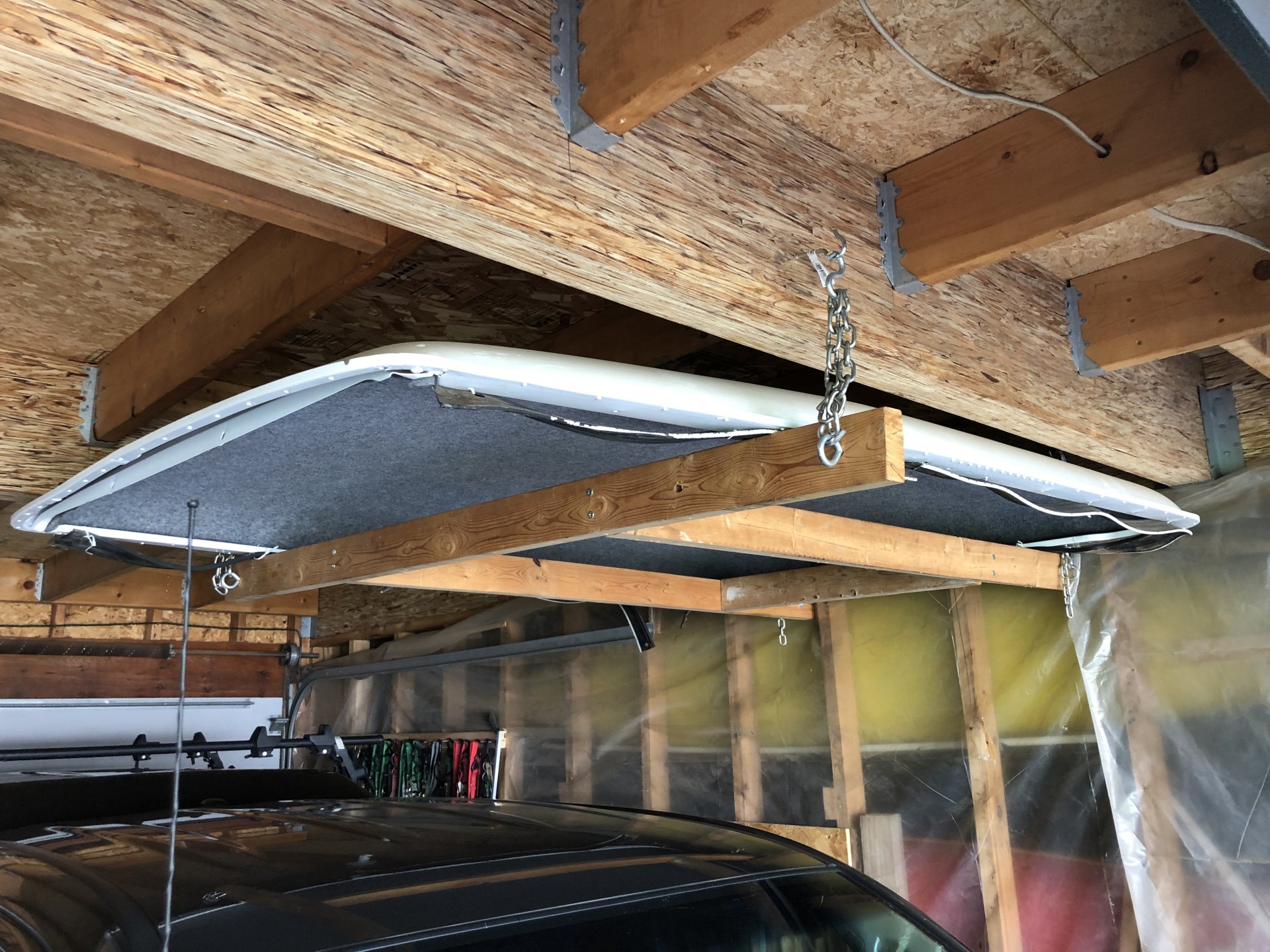 I think you are north of 25k with the trailer - I would start in the mid-30s and see what happens. You just need to find the correct buyer.
You must log in or register to reply here.

N
Ambulance doors door lock, what am I missing?

Thoughts on pricing for 74' FJ