I am posting this for a friend.

History: Royal Rose bought this truck back in 1992 from the FBI, and wheeled the hell out of it in the Utah desert. He did the Cummins conversion, and half the other work which was visionary at the time.

I bought the truck in 2004 and put in the ranger, alcans, hyrdoboost, FF, and 16” rims. While Royal made a family crawler out of the truck, I took it more expedition- I’ve driven it from California to Canada for wheeling and various trips. In the 30,000 miles I put on it, I had no major issues other than those associated with driver error. I put on a full length rack which cut my mileage, but the truck is capable of a comfortable 70mph and 17-20 mpg. It loves biodiesel.

I sold it in 2007 to Mike. Mike’s a young diesel nut and has been studying diesel mechanics in school, but while he likes the truck he wants to get out of it. He and his mother Berna put four new tires on it, otherwise he hasn’t touched it or driven it too much.

This is a truck I wouldn’t hesitate getting in a driving it across the country (which I did 4 times up and down the West in time I owned it). It comes with a manual for the engine and a part listing as well. I never had problems getting parts, other than waiting a little. While I had to wait for the glow plugs a few times, I never once used ether to start it. It did it on its own.

What it needs: some sheetmetal love, and a new turn signal system. The tail gate is finicky, but works. I replaced some of the metal in the upper rockers before I sold it to Mike, and it needs some of that finished. Parking brake prefers not to work.

Truck is outside of Cheyenne, Wyoming.

I am in Central Asia, have limited email access, and might not get back to you for a week if there’s no electricity or there is an internet connection problem. DON’T PM ME, but feel free to email me (steen.wy(at)gmail.com) if you have any questions, but please try the owner first. Thanks!

A great rig for sure. I've had the opportunity to spend time out on the trail with the famous 55 through two of its owners. Wish I had room for a piggy at my place

PS Brian, how the hell are you! Hope all is well. Stay in touch.

Brian... that guy didnt own it for very long. I dont even think I ever seen him drive it around town.

That was a great pig.... I miss seeing the old girl around Orem 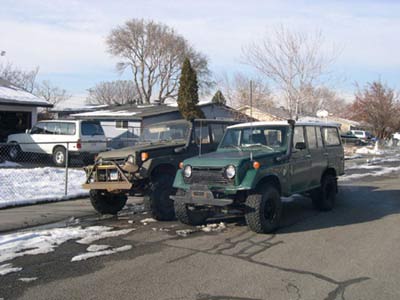 Gee thanks for posting that when I'm trying to sell a chevy rig. At least mine doesn't have as many dents.

That is what I would like to do as far as drive train. Nice!!!

Dang, Bennet- I miss both those trucks. I wish I had drive the portal pig more before I history'd it.
Kurt! I'm alive, and dreaming of Cruisers. Top secret stuff that only someone in deep withdrawl could understand.
Dave- Mike's owned it for two years. He's learned alot from it, but he's gotta downsize.
Rusty- Some trucks take dents better than others.

Time to go drink some vodka with my colleagues. Sunday is International Women's Day and some (Soviet) customs never get old. давай!!!

ridgerunner said:
Dang, Bennet- I miss both those trucks. I wish I had drive the portal pig more before I history'd it.
Kurt! I'm alive, and dreaming of Cruisers. Top secret stuff that only someone in deep withdrawl could understand.
Dave- Mike's owned it for two years. He's learned alot from it, but he's gotta downsize.
Rusty- Some trucks take dents better than others.

Time to go drink some vodka with my colleagues. Sunday is International Women's Day and some (Soviet) customs never get old. давай!!!
Click to expand...

Bret- No, it's left hand drive. The snorkle's just closer to the air cleaner. You can't really see the snorkle from the driver's seat, but you can hear the turbo better.

Off the subject, do you know where the snorkel was purchased?

Pretty sure the snorkel is homemade.

thats bringing back some memories of the old days,,,, might as well point out the first diesel engine attempt with that mitsu whatever it was. and wasnt there a 6AT also?

The engine is a 6at, 3.4L indirect injection. I forget how much power it makes, but it was always sufficeint for what I needed it for and it beat the hell out of filling my tank with gas.

I'll never go back to gas burner again unless I can run an alternative fuel that burns clean and doesn't deprive people of food.

i always remember the specs on that engine being almost the same as the 2F, but of course with diesel you get the feel of 30% more power whatever that means.

Now with 50% more Coco for twice the Chocolaty goodness.

Bump for a new price!

Anyone know if this pig is still for sale?