This is a question for you experienced mechanics...


I just finished doing a tuneup on my FJ60 with the factory 2F in it. Reading the specs out of the Toyota engine manual states that the timing mark (BB) should be checked for 7 degrees BTDC with the distributor vacumn hoses disconnected at a maximum of 950 RPM.

Question....Does this mean I have to be precise and set 950 RPM to shoot the timing light at the marks, or does this imply a range of RPM...(e.g. between idle speed (650 RPM) up to as much as 950 RPM)? The alignment mark does vary either side of the mark dependent upon engine RPM within the RPM range of 650 - 950.

This was my first tuneup, and would be interested in others experiences and opinions.

The alignment mark does vary either side of the mark dependent upon engine RPM within the RPM range of 650 - 950.
Click to expand...

I'm curious too, I had the same experience. The last time I tried to kick the rpms up to 950 while timing it at 7deg.

I'm inclined to believe it does matter. How much I'm not sure.

I dont think it will make much of a diffrence of the timing is slightly off, i've got mine set at 11. Gives the moter a little more power, but i have to run premum fuel. As long as it not retarded much below 7, and dosent ping when above 7.
Later
K

Ok, here is your response from the master toyota tech that does this all day, every day!!
Yes, it does matter a very slight amount. The reason they
tell you to up the idle is to give you more of a consistent
smoother reading. You should set your timing at an idle speed of 700-750rpm. Then you can align the BB to the pointer. That will be 7deg.BTDC. If you are above 3000 ft. above sea level, then add 2deg. for a total of 9deg.(10 MAX).
Make sure you don't confuse the advance and retard vacuum lines. The port that is furthest from the distributor is advance
The other one closest to the Dist. is retard. If they are mixed up, they serve no purpose at all!! And they don't always work
as you rev the engine or decelerate. They are supposed to be operated by VSV's or vacuum control boxes, depending on model and emissions equipment. Any other questions let me know!!

Thanks, I appreciately the info... I've got two FJ60's that I'm starting to have fun with, and it's good to have a tech resource around! I'm sure I'll have a few more questions once I attempt to replace the manifold gaskets...

Cheers, and keep on Cruising!

kruzrtek said:
Ok, here is your response from the master toyota tech that does this all day, every day!!
Yes, it does matter a very slight amount. The reason they
tell you to up the idle is to give you more of a consistent
smoother reading. You should set your timing at an idle speed of 700-750rpm. Then you can align the BB to the pointer. That will be 7deg.BTDC. If you are above 3000 ft. above sea level, then add 2deg. for a total of 9deg.(10 MAX).
Make sure you don't confuse the advance and retard vacuum lines. The port that is furthest from the distributor is advance
The other one closest to the Dist. is retard. If they are mixed up, they serve no purpose at all!! And they don't always work
as you rev the engine or decelerate. They are supposed to be operated by VSV's or vacuum control boxes, depending on model and emissions equipment. Any other questions let me know!!

If I'm using a timing light that adjusts the light, should I set it to advance 7 degrees or 9 degrees? If the TDC mark is at 7 degrees advanced, do I need to take that into account with my Inova timing light or just set it to zero?
1982 FJ40
RAKKASAN!

I would set the light to zero. These rigs are OLD. You point some high tech light at it who knows what will happen. Seriously, I use a timing light I bought when I was 20. I am 59. It is just plain zero. I also hook up an old Sears engine analyzer I bought about the same time as the light (I see them now on Ebay for $20) that lets me check point dwell and rpm while I get the timing set.
1977 FJ40 all stock with 2F and 4 spd.

The RPM is a range, the reason not to exceed 950 is that is the point in pretty much all Land Cruiser distributors that mechanical advance starts. In other words at about 1800 distributor RPM, (which is engine RPM x's 2) the advance weights start to swing out. If the engine is above that point in RPM your static timing will not be correct. So normal idle works just fine for setting the timing. Key is that the engine is idling smoothly, too low and it lugs a bit. Seems with the smog stuff and extra belt driven accessories the higher idle was needed on the 2F's.

On an FJ60 both vacuum lines are advance. The inner line runs through the emissions gunk and controls the real advance of the distributor. The outer line runs back to the HAC valve, (High Altitude Control Valve) which advances the timing approx. 4 degrees whenever the vehicle is over approx. 3500-4000 feet. The HAC also bleeds extra air into the two ports on the top of the carb and into a port at the base of the primary carb barrel to lean out the idle mixture and main jet mixtures. It is a large doohickey mounted to the fender below and forward of the carb area, has 5 nipples on it, no wires.

Vac lines to the cap itself provide clean air ventilation to the rotor area to avoid ozone buildup and contact corrosion.

To set timing remove both advancer lines from the distributor, you should cap them if you can because at least the HAC could produce a vacuum leak to the engine and effect idle speed. Base timing should put the pointer on the BB, if the gun is set to 0 degrees. If you advance the gun 7 degrees an engraved line should appear on the flywheel as the BB moves away and will align with the pointer. The line denotes TDC, 0 degrees, but the gun is flashing a 7 so the TDC mark shows up. If you want to add a degree or two depending on elevation and how far you want to push your engine, set the gun to 9 or 10 or whatever and adjust the dizzy until the pointer aligns again. Again depending on elevation when you hook up the HAC and it is actually still functional, (some are not, diaphragm ruptures,) you should see some advancement. The other line should not advance anything unless engine is revved, but by then the mechanical advance will wisk the BB out of sight.

You should also check the advancer for functionality. A short chunk of vac line and your mouth can be used to make it advance. The outer nipple should produce 3-4 degrees, so if you have it on the TDC line for instance, set the gun for 10 and suck on the hose. Line should re-align with pointer. For the inner nipple, you should get about 9 degrees out of it, same drill set gun to 16 and suck, see if the line re-aligns. If nothing works right, advancer diaphragms could be shot.

One vac line, I think the one to the inner port should have a blue restrictor in it, that is needed to dampen the vac flow. The other is straight hose. To figure out if they are correct, I think you can disconnect the hose at the HAC and blow through, it should be a clear path. If they are backwards it won't run quite right, just won't get enough vac advance.

If you are really brave you can rev the engine up to around 3200 RPM or more and see if you get 12-15 degrees of mechanical from the distributor itself, same process, advance your light and see if TDC comes around. Look out for the fan!!!

Other notes on FJ60 tuning, to really dial in a tuneup you need to look at idle manifold vacuum readings and adjust timing, idle speed and idle mixture to really dial it in. Changes to any one of those will affect the other two. Unfortunately Toyota will only let you adjust idle speed on the back side of the carb, it is the lower screw accessible from the fender side. The other screw adjusts fast idle with the choke. Idle mixture screw has a small expansion plug over it on the lower valve cover side of the carb, on the base. To get to it you have to drill the plug out and remove it. Every time I have done this I managed to hit the soft idle screw below it. Also pretty hard to do with it on the truck. For emmisions reasons Toyota did not want anyone to adjust it.

Uh, the dizzy spins half as fast as the engine, Right?
74 FJ40 confined to the swamp. Homemade body parts replace the originals as they rot away but it's a 40 on the inside.
83 FJ60 destined to face the same fate.

@runningdaddy
When you hook up your innova, it will be flashing at zero. If bb can be seen under the pointer, then you are at 0+7=7 btdc.

If the bb isn’t in viewing window at startup you can “find” it:

Alternative: Your flywheel should also have a line that is 0 TDC. With your light at 0, twist dissy until flywheel line appears, now you are at 0 tdc. Let’s say you are running Pertronix and want timing at 13. Now toggle innova to +13 and twist dissy counter clock until line appears. Now you are at 13. A quick double check would be, with dissy clamp tightened, toggle light to back down so it’s at +6. You should now have the bb line up but the dissy is still set at 13.
71 FJ40
76 FJ40

maths
...I roll noodle or inside lane...

"Don't you know that four fifths of all our troubles in this life would disappear if we would just sit down and keep still?" 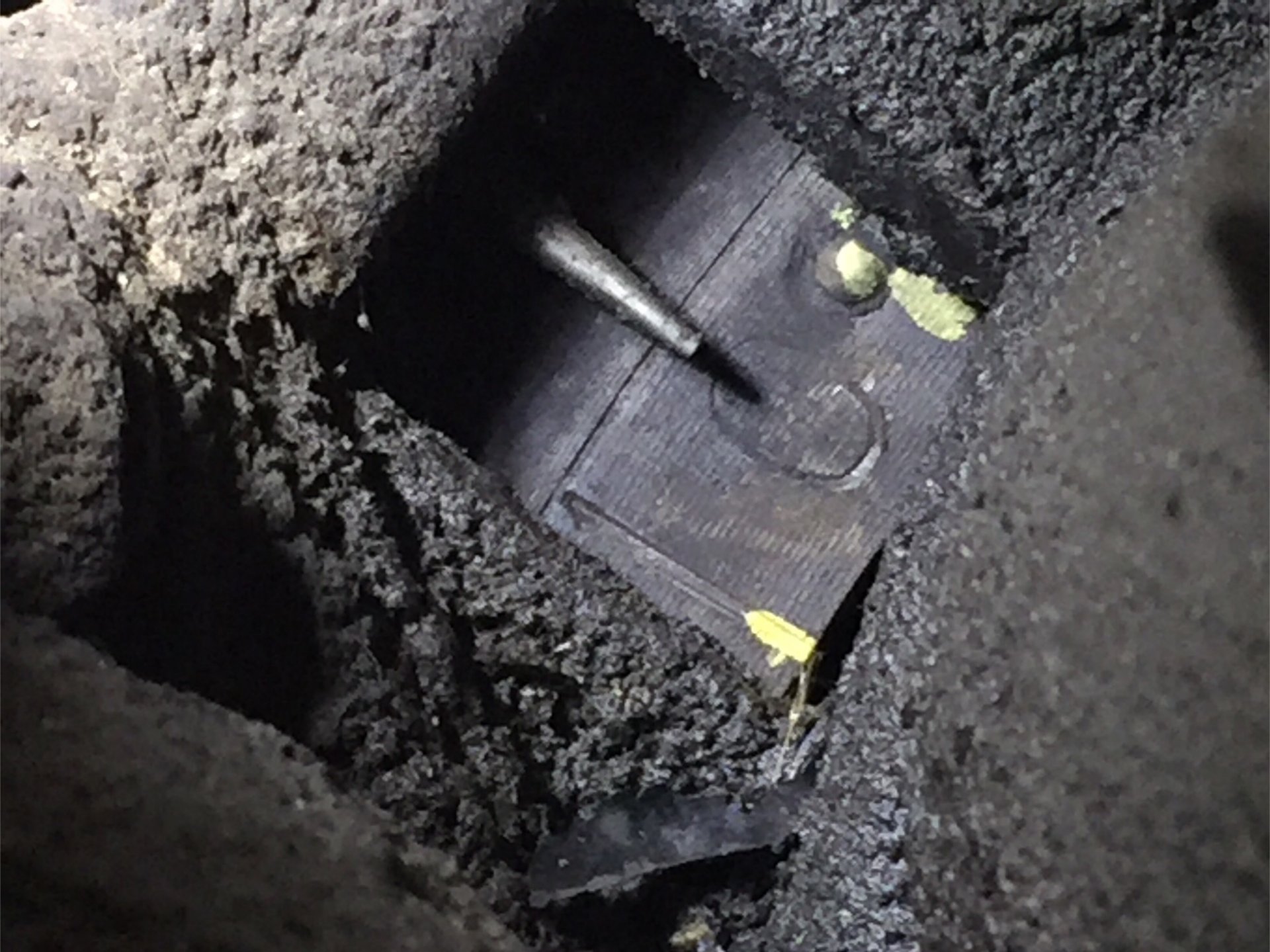 Wednesday at 10:50 AM
Grayscale