Visit site
I just regeared from 4.30 to 4.10, so obviously my speedometer is 2mph off. What I do know is, I have a 20 teeth speedometer gear and I will need a 19 teeth one to match my axle ratio and tires. I looked through the parts catalog and see that the VZN85 uses a 19 teeth speedo gear. Does this fit on all the other runners (that has an automatic) of the same era regardless of engine? I thought about using a 18 teeth also, but that'll make the speedo slightly fast. I don't want that! Anyhow, if the speedo gears in the 90-95 mini truck/runners mix and match, does anyone know where I can find these cheap (other than junk yard or dealer)? I would love to have an accurate speedometer again
Last edited: Sep 10, 2014

Did you change tire size as well? Did you go to the 4.10's to try and get better mileage?
T

Visit site
I'm still with stock tires. I went with 4.10 because there isn't an aftermarket 4.30 7.5" gearset, but also the idea is to get better gas mileage

after spending time looking through the parts catalog and seeing that the speedo cable housing is the same on all the runners, I'm fairly certain that the speedo gears can swap over... I just want to make sure and be assured it will work before I spend money on a new gear

so if anyone has swapped their speedo gears, please reply!

I think the 4 cylinder/5 speeds had a 6/18 output to speedo cable gear set... I do not know if you can swap just the one gear... What you should look at is the output gear, to see if they are all the same between the different engine/trans combos...

Good luck! FYI I have not heard of anyone doing this, at least not to completion......

Visit site
just to make this clear and avoid a misunderstanding, I'm referring to my previa van, which happens to use a 7.5" 3rd member... so obviously the mini truck 7.5" IFS stuff fits.... I wish this rig had a 8" ring gear, which would make things easy as nitro does have the 4.30 8" gears

interesting enough, the previa uses the same 20 teeth speedo gear as some of the 2nd gen runners, which is what led me to posting this thread

so.... for all intents and purposes, just assume we're talking about a 2nd gen runner speedo
T

Visit site
ugh, browser fail... let me post this again so that its legible
why can't I edit posts?

2ndGenToyotaFan said:
I think the 4 cylinder/5 speeds had a 6/18 output to speedo cable gear set... I do not know if you can swap just the one gear... What you should look at is the output gear, to see if they are all the same between the different engine/trans combos...

Good luck! FYI I have not heard of anyone doing this, at least not to completion......


well seeing as nobody has really done this, I guess I'll have to take the plunge and give this a try... the speedo gear I need is back ordered and will take a couple of weeks to get in

Visit site
oh I will... and I will post a list of the speedo gears part numbers once I determine this works
I will need some help though as I'm not familiar with runners

if successful, this is a more simple and cheaper solution than using those silly speedo correction boxes
T

Visit site
VZN85 mini truck 19 teeth speedo gear ordered... now I'll have to wait 2 weeks for this to come in

Visit site
As long as the speedometer output for the gear is off the case then yes, excluding of course two particular things here.

A 2wd-Auto output will not work b/c of the way the output shaft is setup versus a transfer case's.

You match things to be electrical-feed to electrical feed as well as mechanical to mechanical.

The reason they'll interchange so readily is b/c of the eccentric offset of the shaft the gear attaches to.

**My R-150 I swapped into my '95 had a 31 tooth, so those other part #'s are respective to the manual transmissions like you posted.
They're all easy to swap out. Look where the speedo cable attaches and undo the coupler. Then grab a (12mm IIRC) 6 point socket and undo the nut holding the fingertip shaped piece to the slot on the side of the speedo-gear assembly. Twist slightly while pulling outwards and it'll pop right off.

PIc borrowed from pirate showing the electrical version, the nut I described as well as the fingertip plate. 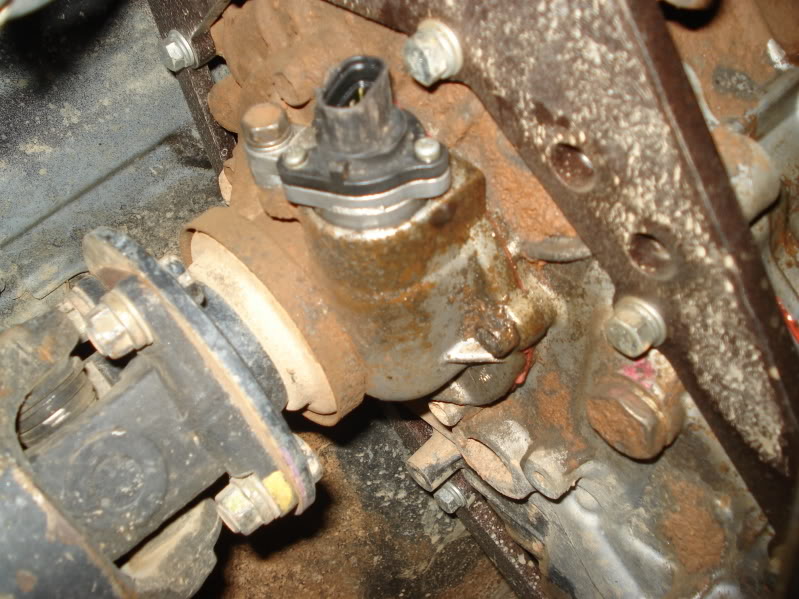 Great topic, Mods might want to add this to the FAQ.

Visit site
thanks for the reply... I'll make this thread "FAQ worthy" once I get my new gear in, swap it, take pics, and then post the huge list of toyota part numbers... I haven't seen anyone else post about the gears, so I guess I'm one of the few adventurists

it turns out that my A46DE (RWD previa trans) has a cable speedo housing that goes into the tranny's extension housing, BUT instead of a cable that screws onto it like you would expect, an electric sensor screws into it!... pulling the thing out is just like what you described from what I saw in the FSM... a 10mm bolt, remove the little metal plate, then the gear assembly pulls out... I don't expect to need to separate the sensor from the gear housing

the later year previas uses the A340E (or A340F), and it has a "one piece" sensor like the one in the pic you posted


anyway... just extraneous info that won't concern any of you
T

Visit site
got the gear in today... was surprised it came so soon actually... so I put it in this afternoon, fits PERFECTLY

had a little trouble getting the whole assembly off the tranny as the o'ring "glued" itself to the tranny... after fighting it for a bit it came out

what's interesting in the A46DE is, there's no clip at the bottom of the tube to hold the gear in place like you expect in the pre-93 hilux, it just slides right in!

I'm going to go test drive in a bit and will post pics tonight... I'll try to post those part numbers soon also

Visit site
As promised here are the pics...
Here is the new gear (it came with a new o'ring too! ): 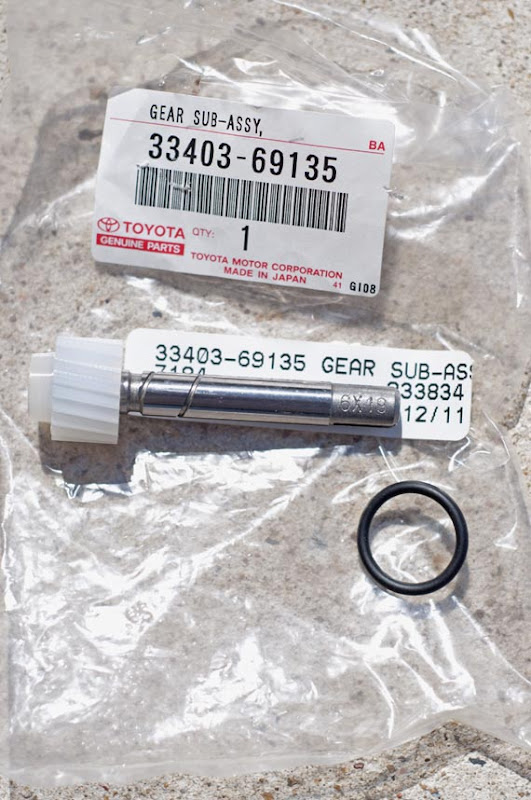 This is the VSS1 unit itself... ignore the sensor, the gear housing is actually a cable speedo housing (similar to the mini trucks) and the sensor screws into it on the A46DE... weird!

I didn't notice the little gold linkage piece in the middle of that pic oriented the wrong direction when I took the pic.... in any case, the small end goes into the gear housing.... pretty obvious once you have it apart. I don't know if the mini trucks has this piece though

New and old driven gears side by side: 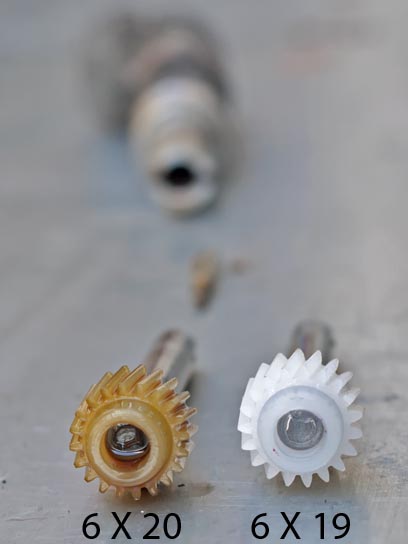 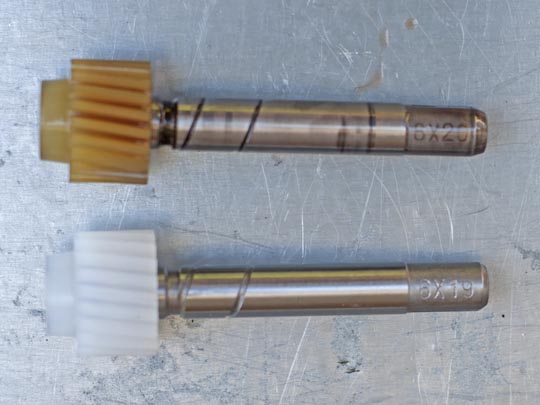 It's hard to see in this pic, but you can barely see the speedometer drive gear.... it's a giant worm gear inside the tranny's extension housing. If you don't know which driven gear you need, you can count the teeth in the drive gear. I counted it just for grins and it was indeed 6 tooth. Sorry, it was hard to take this pic. 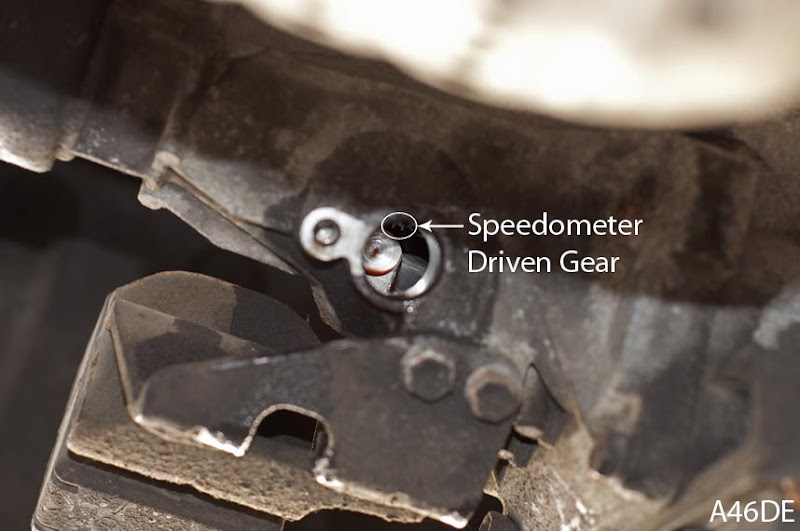 The new gear just pops right in and it went into the extension housing like warm butter! 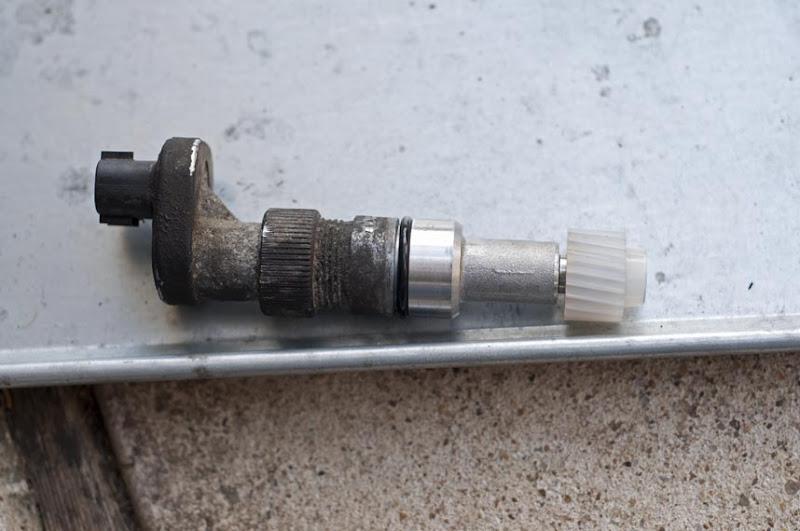 What's interesting is, there's no clip to hold the gear in place like it is on the hilux/surfs... Another 10 cent part unneeded I guess since the gear has no where to go as you can see in the previous pic... there's a giant aluminum stopper to keep the gear from flying out in the A46DE.

Accurate speedometer again all for a little over 20 bucks! This is WAY cheaper than either the electronic or mechanical correction boxes which costs around $100. Time spent to put this in is probably less than the more expensive alternative.

I drove my van around and went by one of those speed check signs, and it is reporting what I was expecting... the speedometer is accurate! I still need to get it GPS checked but I'm confident it's within 1/2mph accurate

When you slid it into the trans, did it feel like the new gear meshed with the worm gear pretty well, or did you have to fight it in? Just wondering if there are slightly different angles on the gears???
T

Visit site
Like I said, it went in like warm butter... I did rotate it back and forth a bit as I was sliding it in, in order for it to mesh up... but the only thing I had to fight was the friction from the o'ring itself

I spun the wheels while the van was still in the air up to 40mph and confirmed it was working before I put it back to the ground.

Oh yeah, I forgot to say that the tranny shifts at the correct speeds again (since the ECU sees the VSS1 signal first before the speedo does)... in fact it seems to shift at lower rpms than it used to, which is better for gas mileage in most cases
T

Visit site
NOT RESPONSIBLE FOR INACCURACY

Gonna stick it in the FAQ thread. Hopefully some others will feel brave enough to give it a shot!

Visit site
can you please change the thread title to something more appropriate? that way if people search it will be more obvious

I didn't expect this to take a few hours to gather the info and present it legibly, so I'll work on the 4WD stuff tomorrow
You must log in or register to reply here.

The truck that keeps giving, chattering/clanking in gear