1984 2H Toyota engine. 4 liters of diesel burning fury backed up by the oh-so-loverly h55 5 speed gear box. Right behind that, you'll find another piece of Landcruiser joy, the split case transfer. Yup, it's got all the right drive line bits, save for lockers.

I have posted the truck in the 60 series trucks for sale because i would prefer to sell the rig whole. I don't have time available to part it. Asking price is 4500$

The ARB bumper, Old Man Emu suspension (2.5" lift), and all the rust you can handle come with it. Yes, hate to say it, but let's be up front about this. This truck is riddled with rust. In the roof rails, A, B, and C pillars... yes, the frame too. I purchased the truck for a UTE project to build it the way I want. Life is intervening (and a build for my father in law) so my space is more valuable to me than this rig right now. Rather than sit on it, I'd prefer to move it along to someone with less on their plate.

Originally sold in Germany, it was imported and titled in the states in 2002. Was not running well when I purchased it, so I spent some time getting it sorted out and I have to say, it drives really well for being as homely as it is.

I've done the following:
repaired the passenger side spring hanger location(it was welded in crooked, and the rear axle wasn't square. its within a couple mm of factory spec now)
removed a LOT of superfluous wiring and inoperative accessories.
cleaned. then cleaned some more...
replaced the fuel level sender
pulled and cleaned the water separator/sedimenter. it was full of crud. isn't any more. checked the tank while i was doing the sender, and it's pretty clean.
lashed valves to factory spec
replaced a bad tie rod end removed and re greased the Aisin locking hubs
replaced a mutilated fuel line with a good used one
changed fuel filter
changed oil and filter
replaced some cracked hoses
new air filter
new rear brake drums, wheel cylinders, and linings. needs a couple hardware kits to be 100%
i've ran a couple cans of lubrimoly injector cleaner thru it.
re wired the batteries with some better cables
re wired the alternator to charge properly
old muffler was rusted away, so i up cycled one i had laying around and put tail pipe back on it.
I'm sure i'm forgetting something.
could use a pair of batteries. the ones installed work, but are not a matched pair. the low side cell is weak, so i keep it on the maintenance charger. i don't drive it regularly, so i have not replaced them.
super glow system appears to be working well. the dash light does not stay on, but you can hear the main solenoid kick out after about 10 seconds. then you kick it with the wilson switch and crank it over after a count of 3. fires right up. smokes a bit when cold. clears up when it warms. idle is solid when warm, surges a little when cold. white smoke, un burnt fuel.
have NOT pulled the injectors, nor have i done a compression test on the engine. if blow by is any indication of condition, this guy should be pretty ok, as there is minimal, if any.
i have pulled the IP diaphragm cover and inspected the diaphragm. it's nice and supple, no tears, no holes that i can see. wiped the oil off and re-treated it with neatsfoot oil. there is a brand new diaphragm that i bought from mr. landcruiser just in case that will come with.
with all that i have done, there is one thing that i have yet to do, and i think it might clean up the startup. IP timing has not been checked. dying to do it, but i don't have a spare injector tube to sacrifice to make a spill tube to check it per the manual. i hesitate to do this without... if someone has a spare tube they are willing to sell me, i will check/set timing before it leaves. 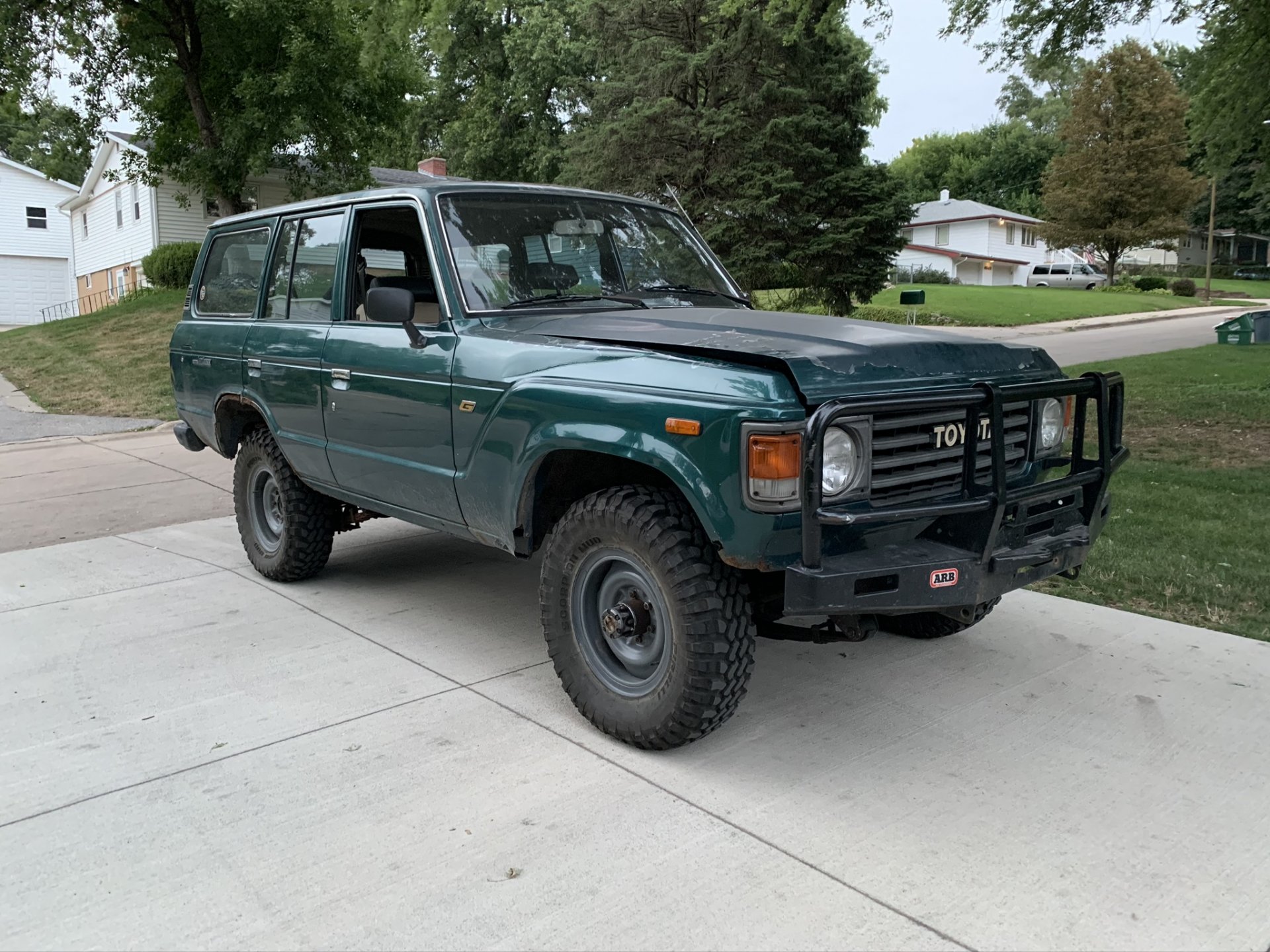 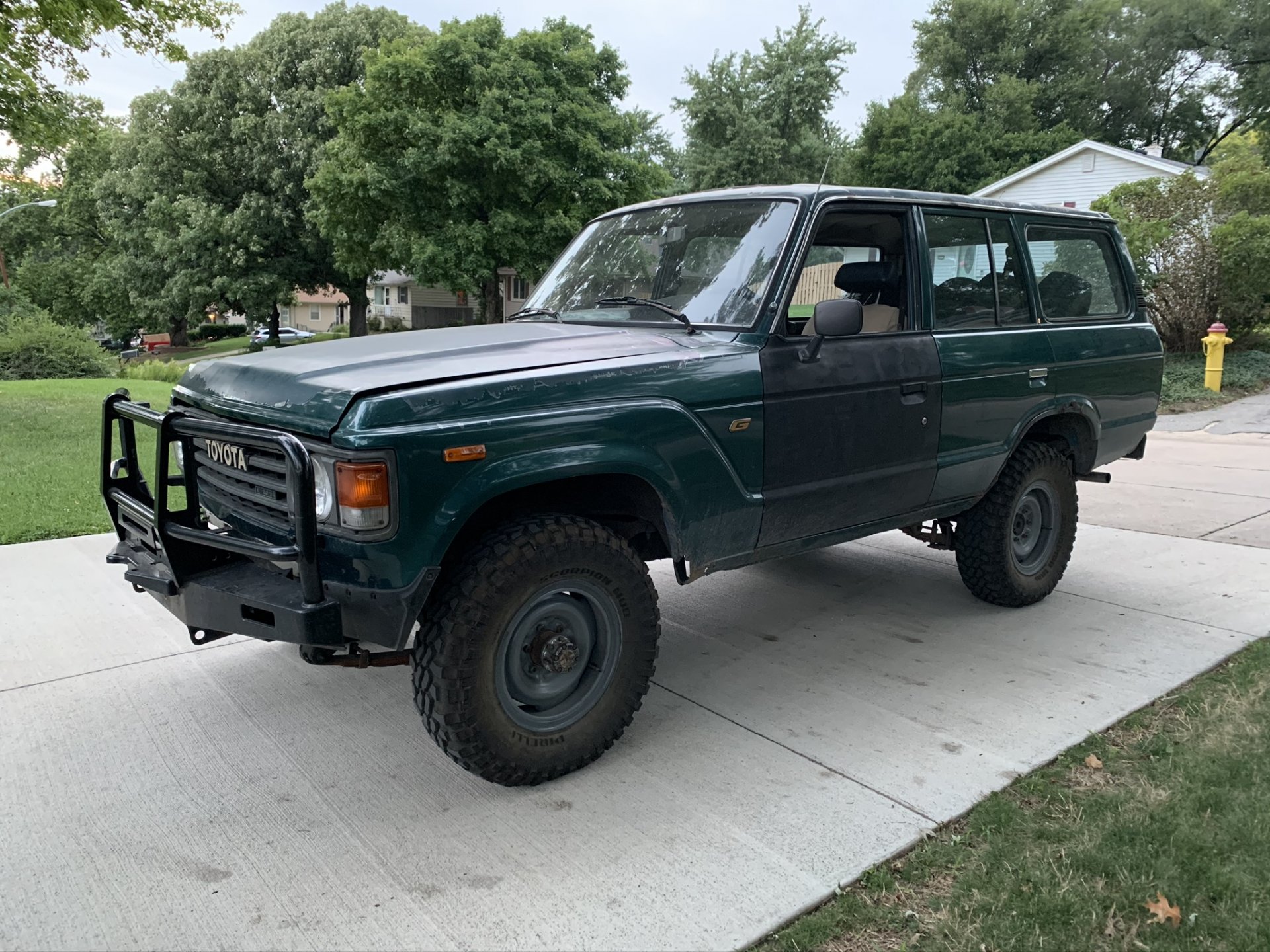 Just to note: the tires and wheels in these pics are staying with me. they are for the 40 series. Will come with some good rollers. And i'll throw in 4 extra chrome 60 series wheels for the right price.

Now for some ugly pics: 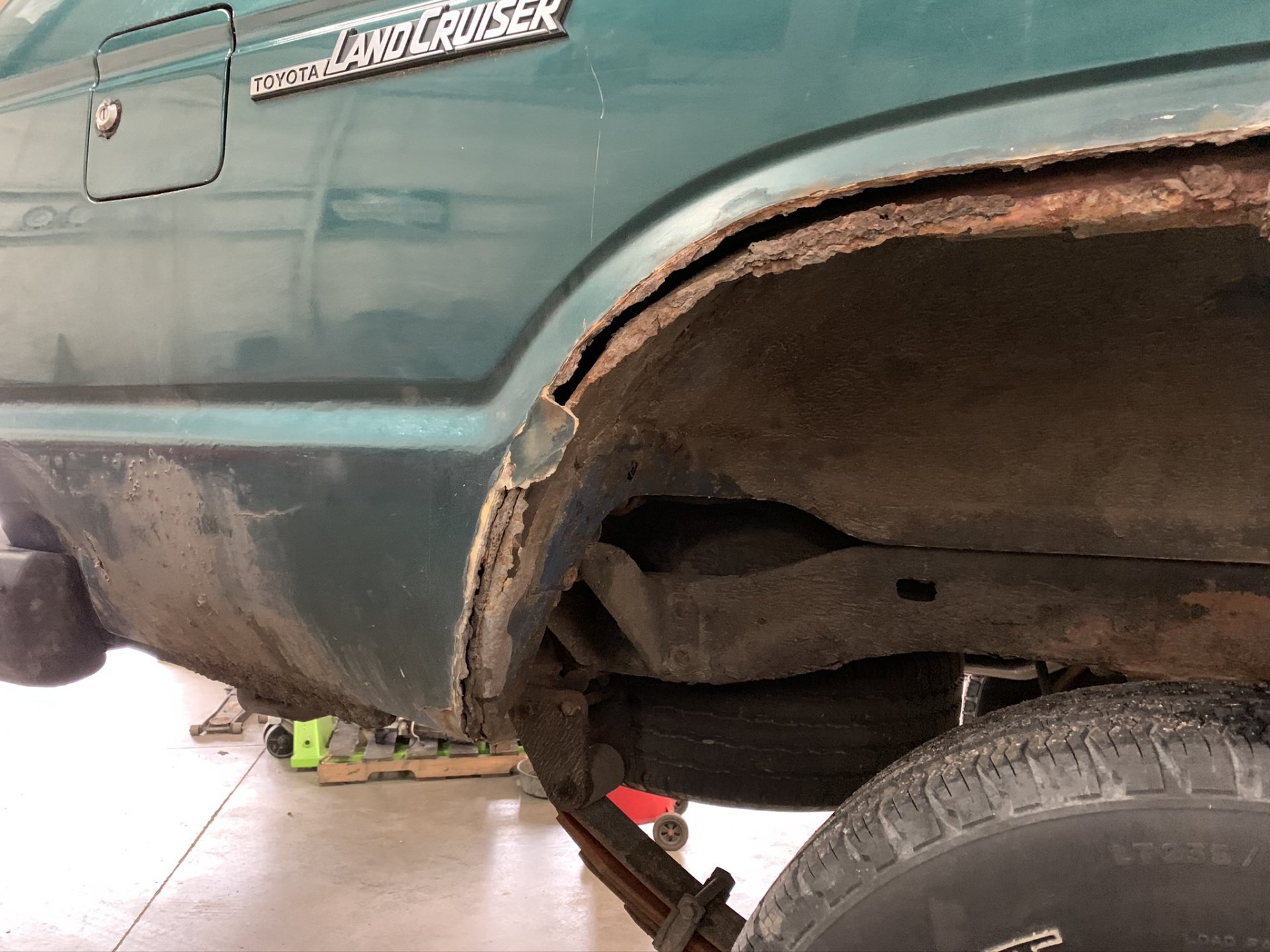 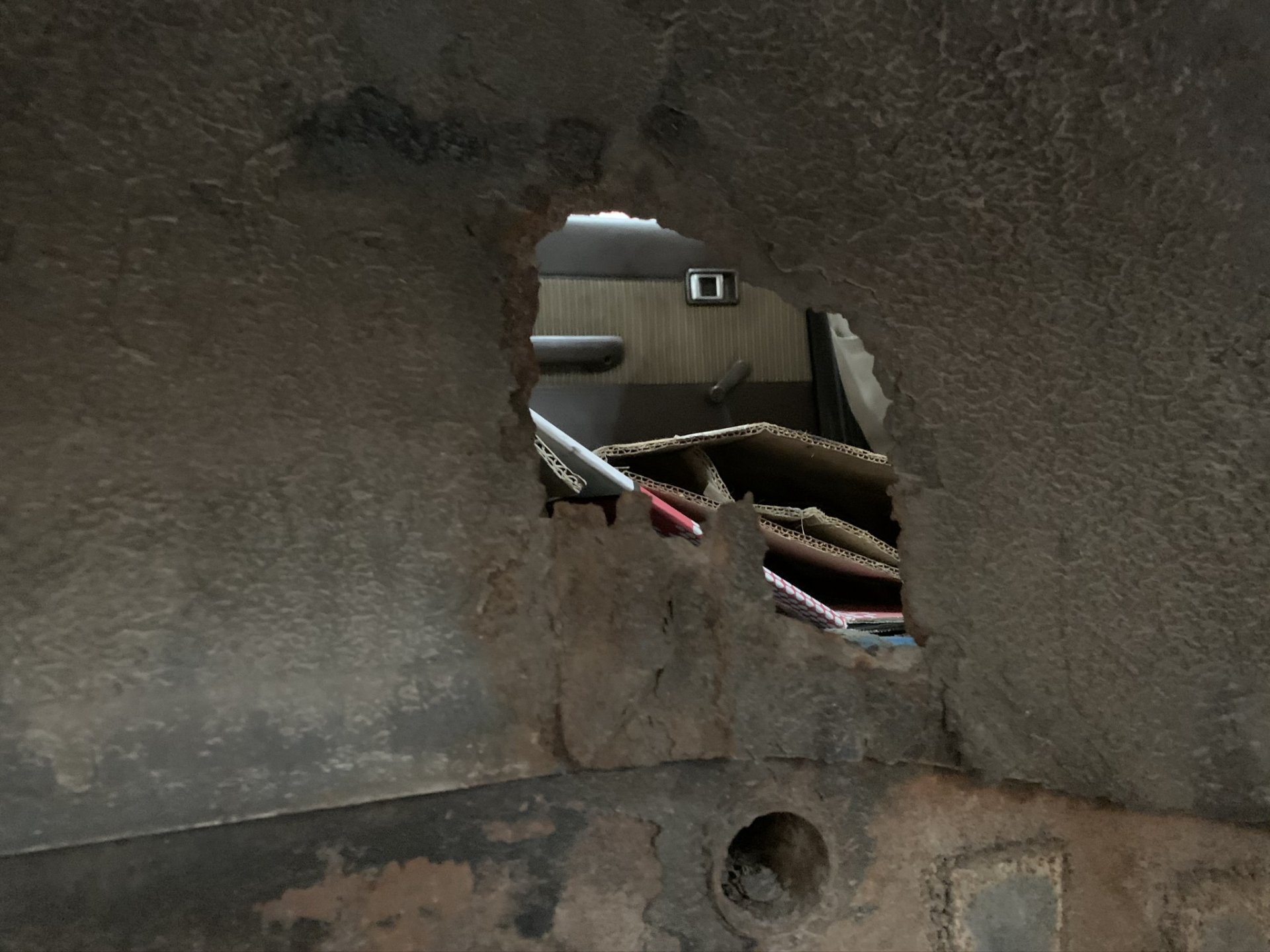 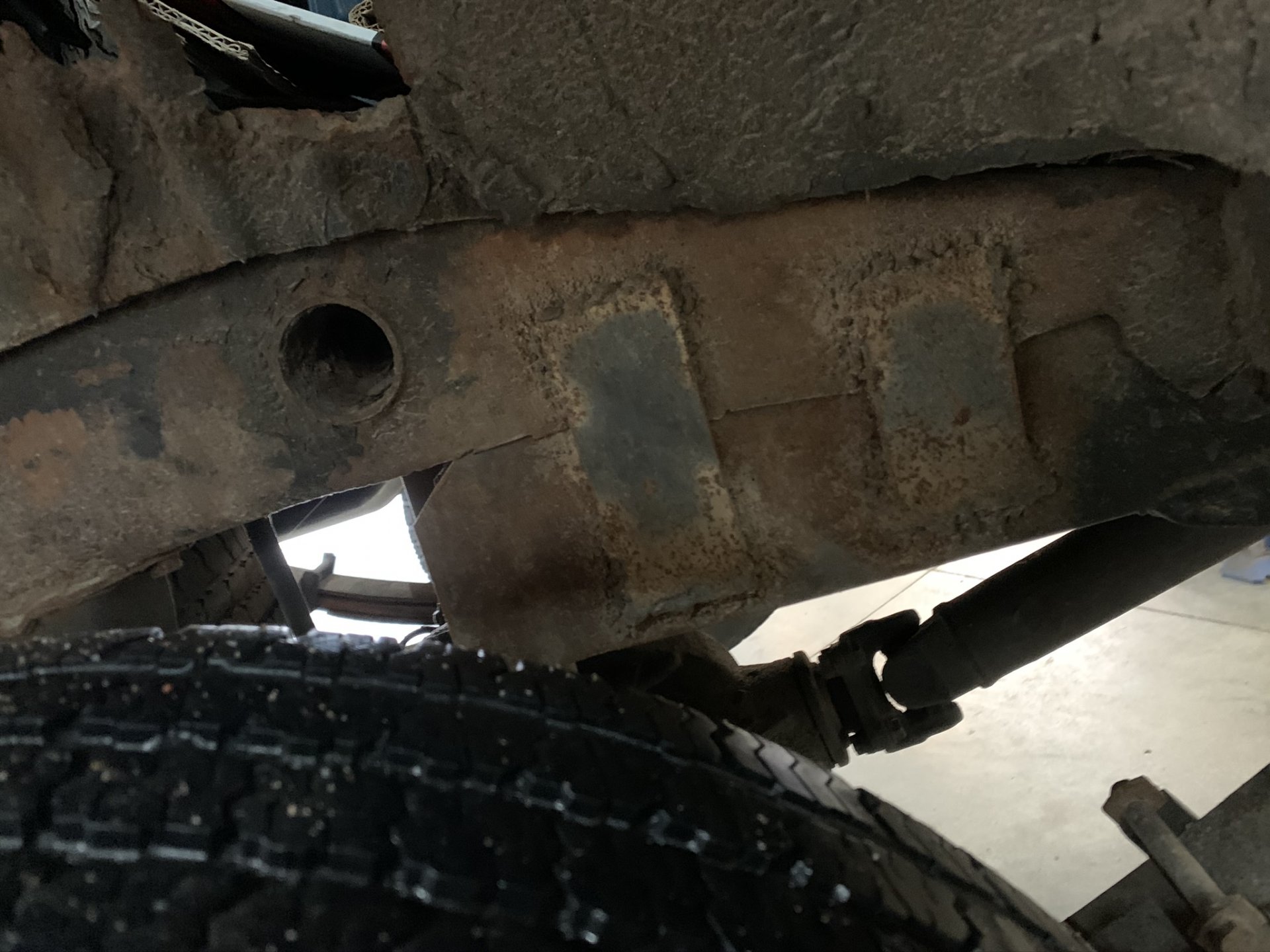 i'll work on getting a shared folder with more photos in it tomorrow. the interwebs is kicking my butt tonight.

Love the paint color. Wonder what it would cost to have the rust professionally taken care of...

knowing the body guys i do... unless they owe you lots of favors, probably a lot more economical to find a clean truck and paint it.

317000 is that KM or miles?
what has been scabbed to the passenger frame rail?

that number is KM's.

the passenger rail looks like it almost came apart. what you see there is a 2x3 rectangular tube that was hammered into the existing frame rail, then badly welded in. the front spring hanger on that side was waaaaay out of whack. i cut it back off, patched a couple of spots, and welded it back into the correct position.

--r
You must log in or register to reply here.