Recovery practice in the Jemez yesterday

around 8:00 a.m. as I was heading into the hot springs, I ran into this vehicle and the owner. He was working the night before and came up to the spot and has been there since 4:00 a.m. doing multiple geometric manipulations in his head! We talked for a bit and decided that I'm going to go soak for a few hours while he goes into Albuquerque to get resources. I gave Randy Dennis' phone and contacted as he was heading back to Albuquerque to fetch resources. Dennis lives around the corner, sorta

This lx450 ran off the road the night before while his wife was driving their 4-year-old to the hot springs, from what I gathered. She pulled over little too far to the right in order to let someone else go around her but the soaked ground simply gave away on the passenger side and she ended up in this predicament. Thankfully, that tree was there to stop her from rolling down the hill.

She was able to contact the brother-in-law and also the sheriff who then contacted a wrecker. The wrecker came and tried to pull the front end straight up on top of the road to no avail. Apparently the wrecker snapped cables and whatnot. The sheriff was helping out the mother by opening the rear hatch and grabbing some stuff even though the mother warned him that the 35 inch tire on a swing out is going to get away from him. Sure enough it got away from him and broke off at the spindle then went for a roll down the hill for few hundred feet. The wrecker dude tied up bunch of broken cables while extending his reach and was able to fetch the spare tire with the swing out attached up the hill. So at least that was something!

What started out as a beautiful soak at the hot springs, ended up being a really long but fun day, at least for me. Haven't had to do a recovery like this in a long time so it was nice to practice all of our skills.

By the time I got done soaking, Dennis came up to assess the situation. We spoke for a little bit then he went home to fetch equipment. His wife Sarah had a really good idea and that was to eat some food because dinner might be many hours away. All of us met at the brewhouse in Jemez springs for some pizza and liquids while we waited for Randy to turn around and head back up to the recovery scene.

Here's a video to get you started: New video by A. Ali - https://photos.app.goo.gl/aCz8PApk39yt4tWB7

As we were rigging up, Ron Gunderson was done soaking and was heading out at the same time, how lucky were we! Mother nature let loose and rain just poured. We made a nice long trench to allow the driver side wheels to roll out much easier and this trench became a creek by the time we actually were done! The LX was secured to my 80 with the winch cable as we were digging the trench and the soggy ground was making the LX creek and make unsettling noises against the tree.

This was a complex recovery situation due to two kill zones created by two winch cables. The LX's own winch cable was a safety cable, didn't have too much strain on it. But it got a tad too tight and went across my rear tail light! Ron was the director of everything since he had the best view while being out of the kill zones.

Carnage:
LX Roof got damaged by the tree.
My pass tail light lens got broken by the LX winch cable that went across it as it was backing up onto the road.
The LX had NO broken windows and they all rolled down nicely
LX rear bumper tire swing broke off at the spindle.

We passed Lurch on his way out of the Jemez and passed Justin as he was heading into Fenton lake . We were able to chat on the radios when we had comm for a short bit.

Dennis and Ron might have some thoughts from yesterday. 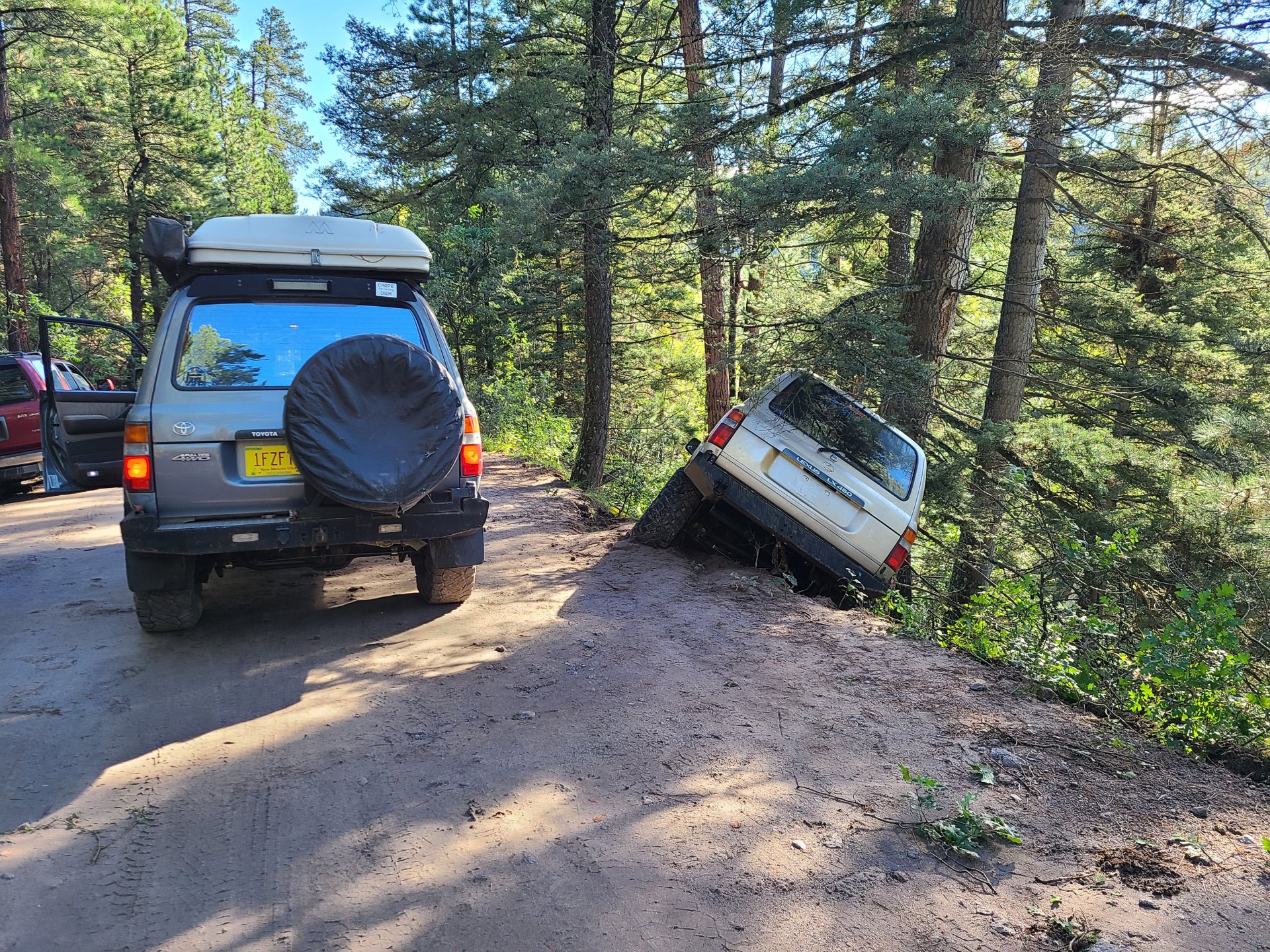 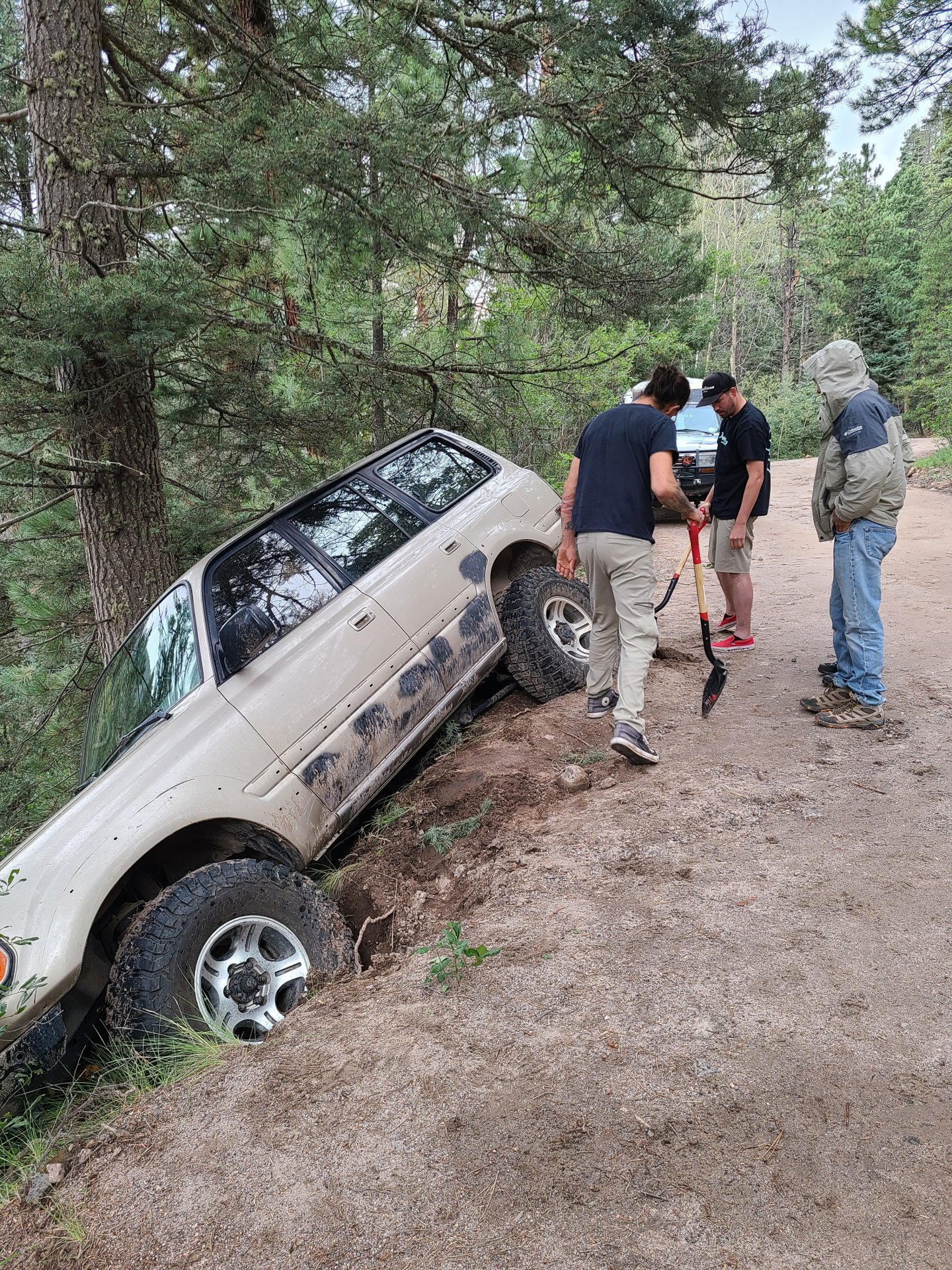 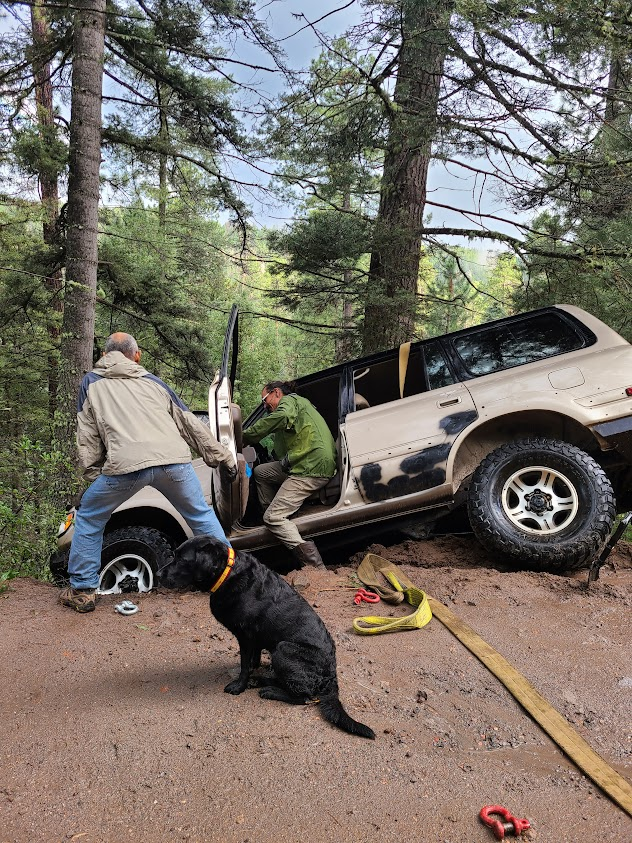 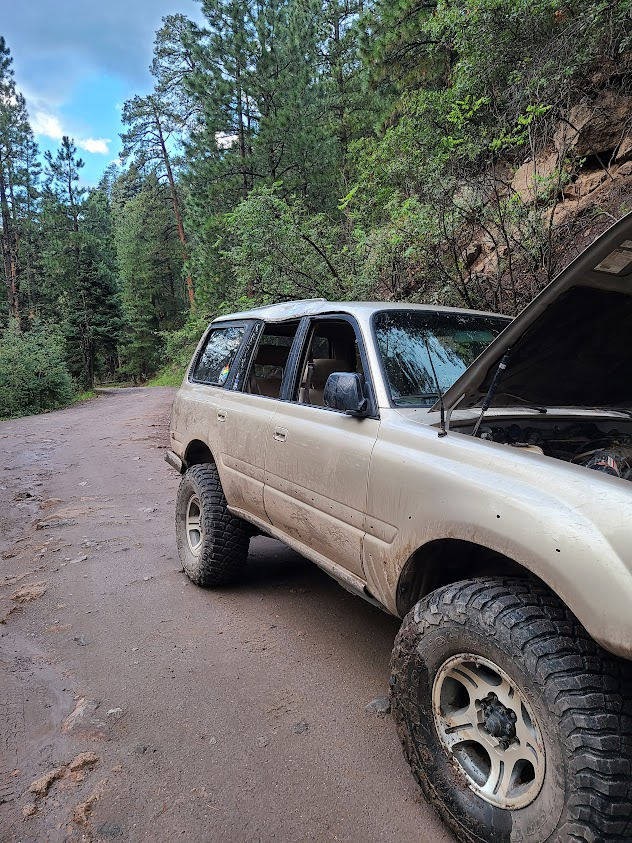 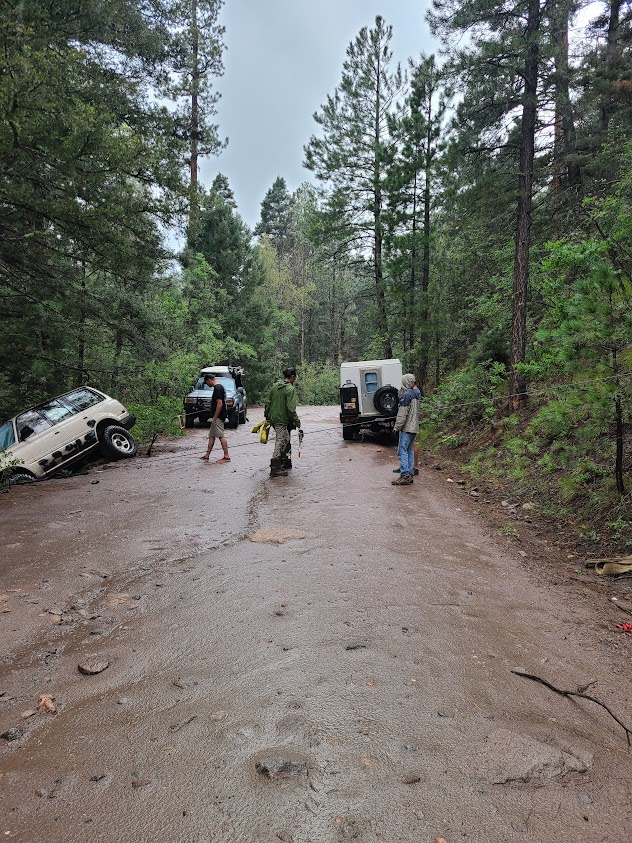 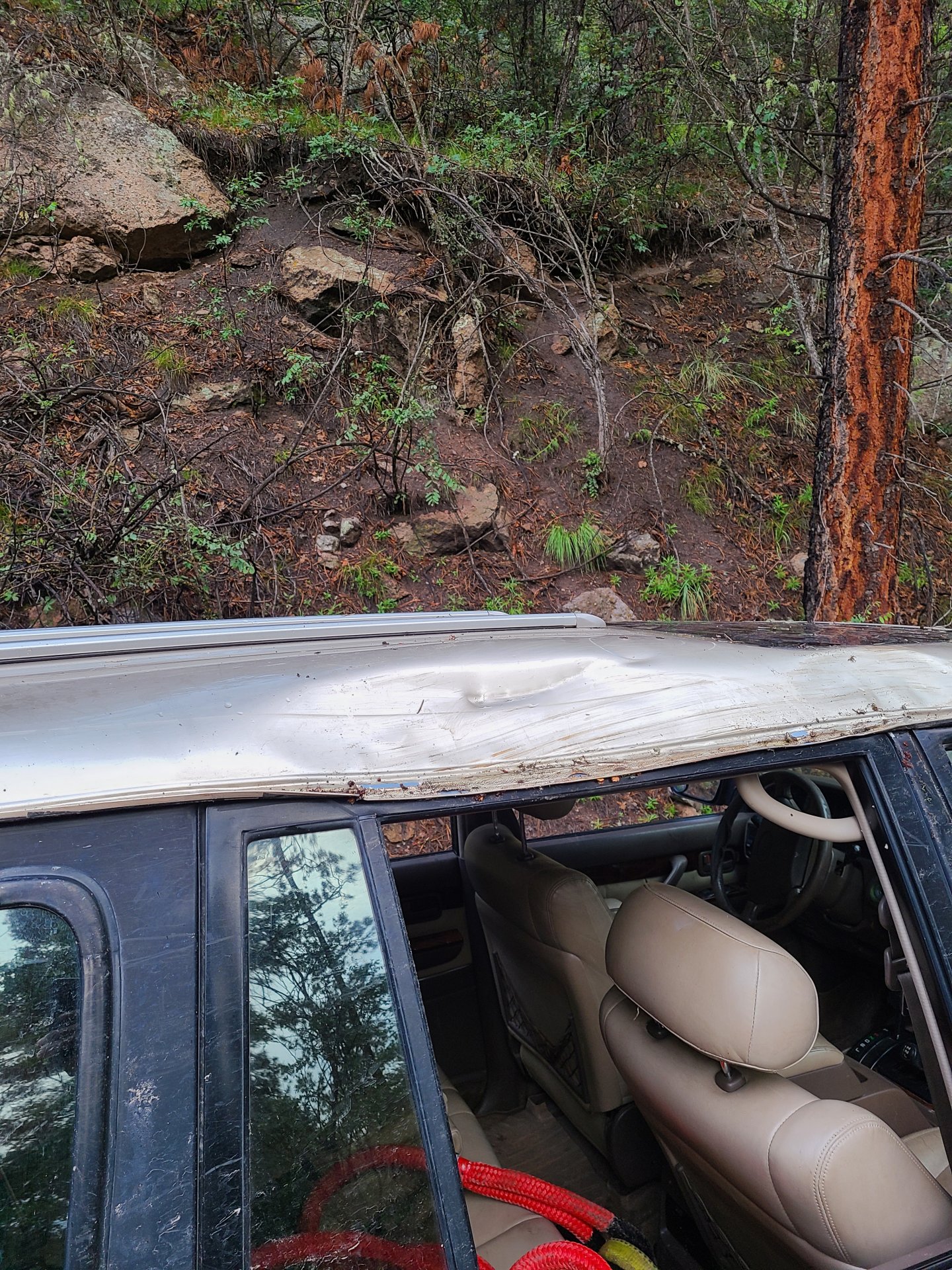 Dennis and I are simply warming up for the upcoming winch fest in the Jemez in regards to the dead vehicle up there!
~Ali~

alia176 said:
Dennis and I are simply warming up for the upcoming winch fest in the Jemez in regards to the dead vehicle up there!
Click to expand...

Location
back in the land of enchantment

video link doesn't work for me

I see that the link is kind of broken up naturally. Pls copy the entire link manually then paste it on a web page, instead of clicking on it like we do normally.

The link was created automatically so I can't change it. Let me know if that works please.
~Ali~

alia176 said:
I see that the link is kind of broken up naturally. Pls copy the entire link manually then paste it on a web page, instead of clicking on it like we do normally.

The link was created automatically so I can't change it. Let me know if that works please.
Click to expand...

think I found the issue. Updated link on the first post. Lmk if that works.
~Ali~

alia176 said:
think I found the issue. Updated link on the first post. Lmk if that works.
Click to expand...

The new link works. Thanks for posting. Quite an adventure.

Wow! Good job with the recovery! Wish I was there to help and learn a thing or two. Unbelievable that it was an 80! I mean, what are the odds of that!
95 FZJ80 triple locked OME stock height springs with 10mm spacers ,OME Nitro shocks, WK sliders Pin7 CDL switch mod 285 BFG KO2s
98 Tacoma TRD 3.4 5speed
19 GX 460
You must log in or register to reply here.

Lurch in the News?