Hey guys, I suspect I've hurt the front diff, but there are some confounding factors so I wanted to get your opinions before tearing into it, as it's our only vehicle right now.

Some background that may or may not be related:
'04lx, mostly stock with 33' AT3Ws
-Since buying the truck 2 years ago the steering pump has been noisy at full lock and occasionally notchy when hot(I have flushed the fluid)
-one of the upper ball joints just started squawking a couple weeks ago

Ok, so last month my wife and I bought a house in VT, last week we got our first big snowstorm. We literally just moved in from NYC, so I have not purchased a snowblower yet. Luckily our driveway is technically a town road, but this meant I needed to get the truck into the garage and out of the way(and quickly, as the plow was here). I got a bit stuck on some icy hardpack, but made it in. The next day I drove a mile to the shops with no issue, but never got it above 20. Yesterday my wife drives the half hour to target, and texts me that it is shaking above 50. I assumed at the time this is wheel imbalance due to snow/ice in the spokes, and this is seemingly confirmed when it goes away shortly later.

Later that day I need to do a longer drive, and about 90 miles in, on cruise but going up a reasonably steep grade, I notice a bit of a vibration as as well. Getting on the gas to induce it, it does seem to be related to how much power is being put through the drivetrain. At low speeds accelerating hard, it results in a sharp but not sustained pull of the steering wheel to the right, ie pulls briefly then returns straight. Going slowly up a steep grade, a cyclic vibration accompanied by a slight pull on the wheel can be felt. The suspicious thing is that it seems 100% fine under normal, low-medium load situations, not a hint of vibration or sound, and no grinding noises that I can hear even with the vibration comes.

So my gut tells me that I may have sheared a tooth or two off of the ring gear, with the symptoms being exacerbated by a worn rack, resulting in the pull alongside the vibration as torque is interrupted to the front axle. But open to other ideas here as I need to wait for some gear oil to be delivered before I can pull the diff cover to check.

Now on to options. As you might imagine having just bought and furnished our first home, money is a bit tight. We also only have this car right now, and this is absolutely a place where car downtime is gonna be pretty painful/potentially dangerous in a power outage(no cell service). So, in the short term:

-Thinking of going 2wd to keep the truck in service and avoid the wife getting stranded if it decides to grenade completely. Near as I can tell just requires pulling the front driveshaft, removing the drive flanges and covering the open hubs with something. I don't actually have the hub caps, so open to suggestions here. Also are there speed limitations for the CDL which would then need to be engaged? I seem to remember something about it disengaging above a certain speed.

-Before this had also been considering the part time conversion, could get a headstart on that by ordering/installing the hub lockers, and have a 'permanent' 2wd solution while I save for options below.

For the permanent repair:

-Find a used front diff, probably ideal from cost/benefit, may take a while to find one

-Replace ring and pinion, cheaper but more error prone and not something I've done before. Don't have a dial indicator here. Also potential spider damage from gear chunks could mean replacing more than just the R&P

-go the 'while I'm at it' route and upgrade, ARB, new R&P etc. costly, but more rewarding. Probably not something I could swing in the near term, if I did the part time, could save for it/build it out of the car while we still use it.


So that's it, would love some second opinions, both on the diagnosis and options. Thanks guys.
I

Vibrations and torque steer would not point me toward the differential. I'd look more at tires, wheels, front driveshafts (CV shafts), etc first.

Changing the oil in the diff will tell you a lot about the health inside there, as you've already planned.

Front driveshaft removed, drive flanges removed, CDL locked, you will not have any issues driving. No speed limitations or anything.
Z

Interesting. Yeah everything for the diff fluid is inbound now, so I'll know more then. Until then I'll start pulling the front end apart to see if there are any obvious culprits.

When I blew my front diff on patchy ice, I didn't notice until the next day.

If it's not consistent with speed, I would look elsewhere. A missing tooth makes you aware of itself.

EDIT: Regarding going 2x4, I've been driving for about two years like this in my 2000. I don't know if the CDL automatically disengages in later models, but I've comfortably gone 70 mph in this configuration. As of the last time I checked, a new front diff assembly from Toyota ran about 2k. After paying a local differential shop (who warranties their work for six months, no less), I'll be in around 2800$ for a complete rebuild with all new internals and seals, an ARB locker, and compressor. Talk to Cruiser Outfitters about sourcing the kit if you decide to go this route, albeit it doesn't sound like this is your problem.
Last edited: Dec 22, 2020

Doesn't sound like the diff, so check the other stuff.
For the day when you want to do something with diffs another way to go, is check out Zuk.
Toyota Gear Install Harrop
You pull the diff and send him the 3rd member and he installs gears/lockers along with his magic touch on gear setup.
Last edited: Dec 22, 2020

when I lost teeth on a front diff it was off-roading and was a pretty violent event with accompanying loud bang followed by intermittent mashing go the gears. Iced to the road tires may have hurt something but a ring or pinion would not be a first guess in this situation... IMHO. Gonna follow this though as I have 98 that is experiencing steering wheel pull and occasional misalignment - so something is moving around. Suspect the A-arms or adjustment mechanism. Good luck!
Z

Well, you guys were right. Jacked the truck up and grabbed the CV, pulled it right out. Clip failure. Will pull and inspect the splines on the drive flange and CV to see what kinda shape they’re in, but all in all great news!

thanks for all the responses, and will share detailed pics of splines for opinions on reusability 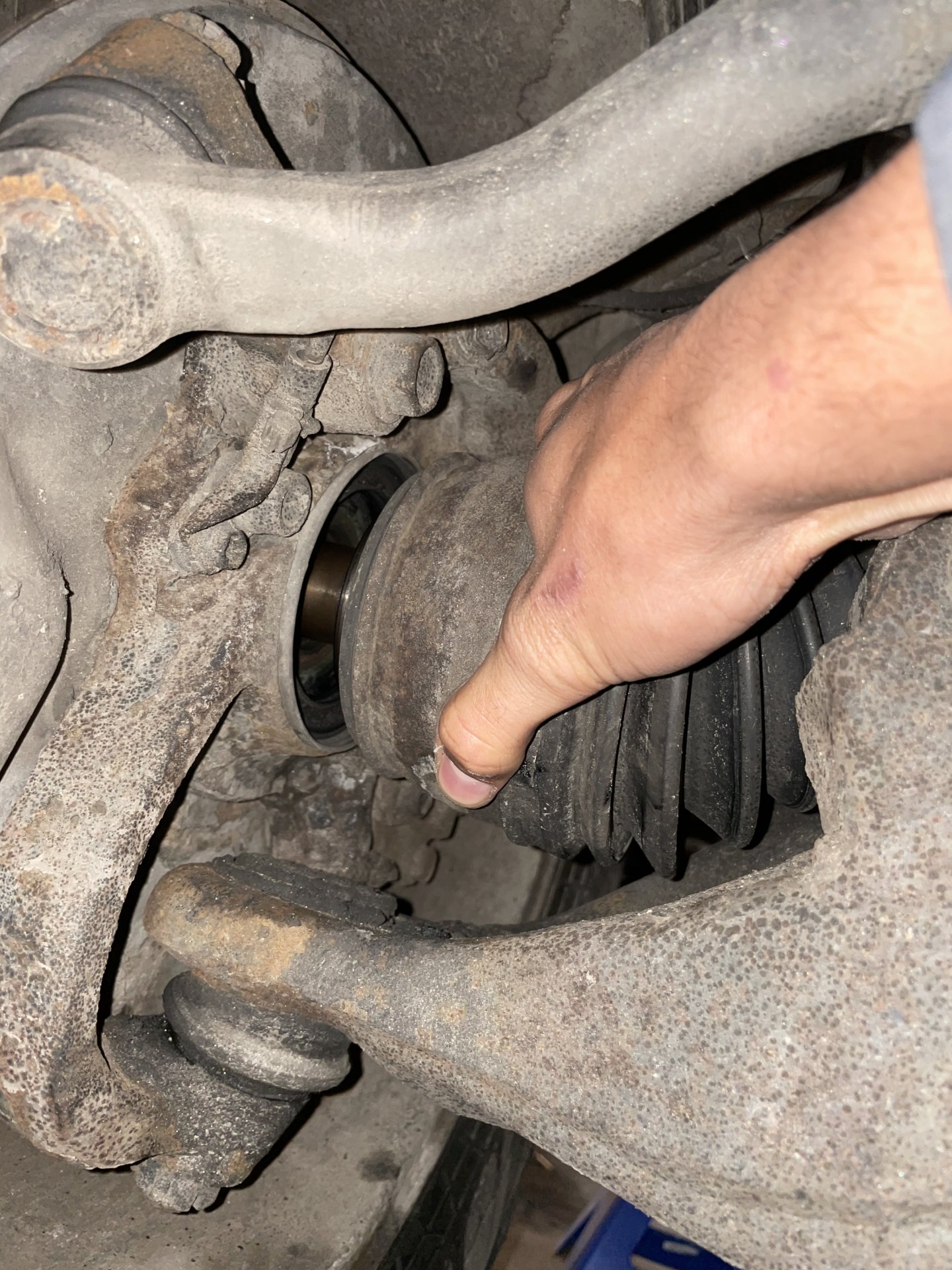 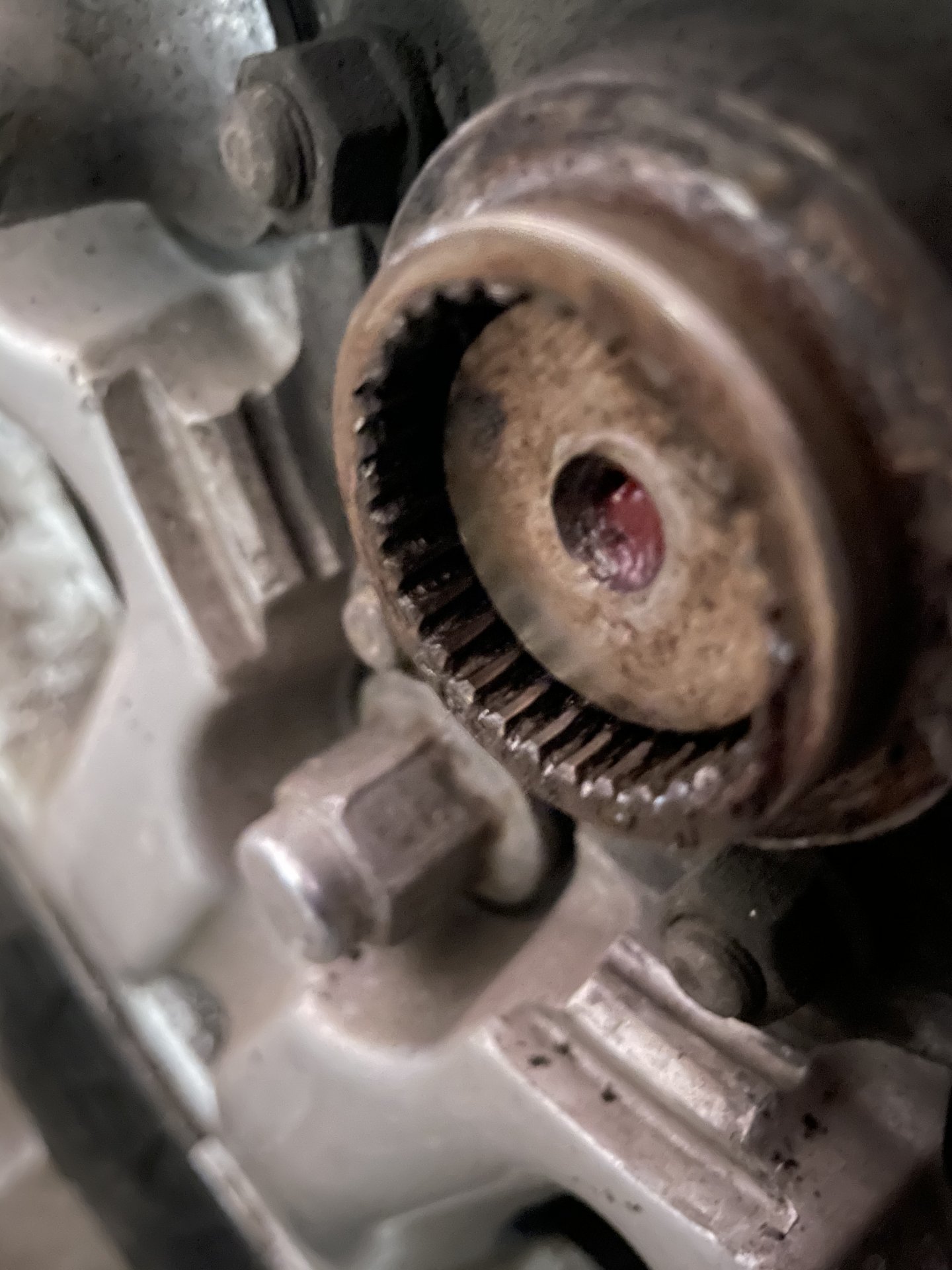 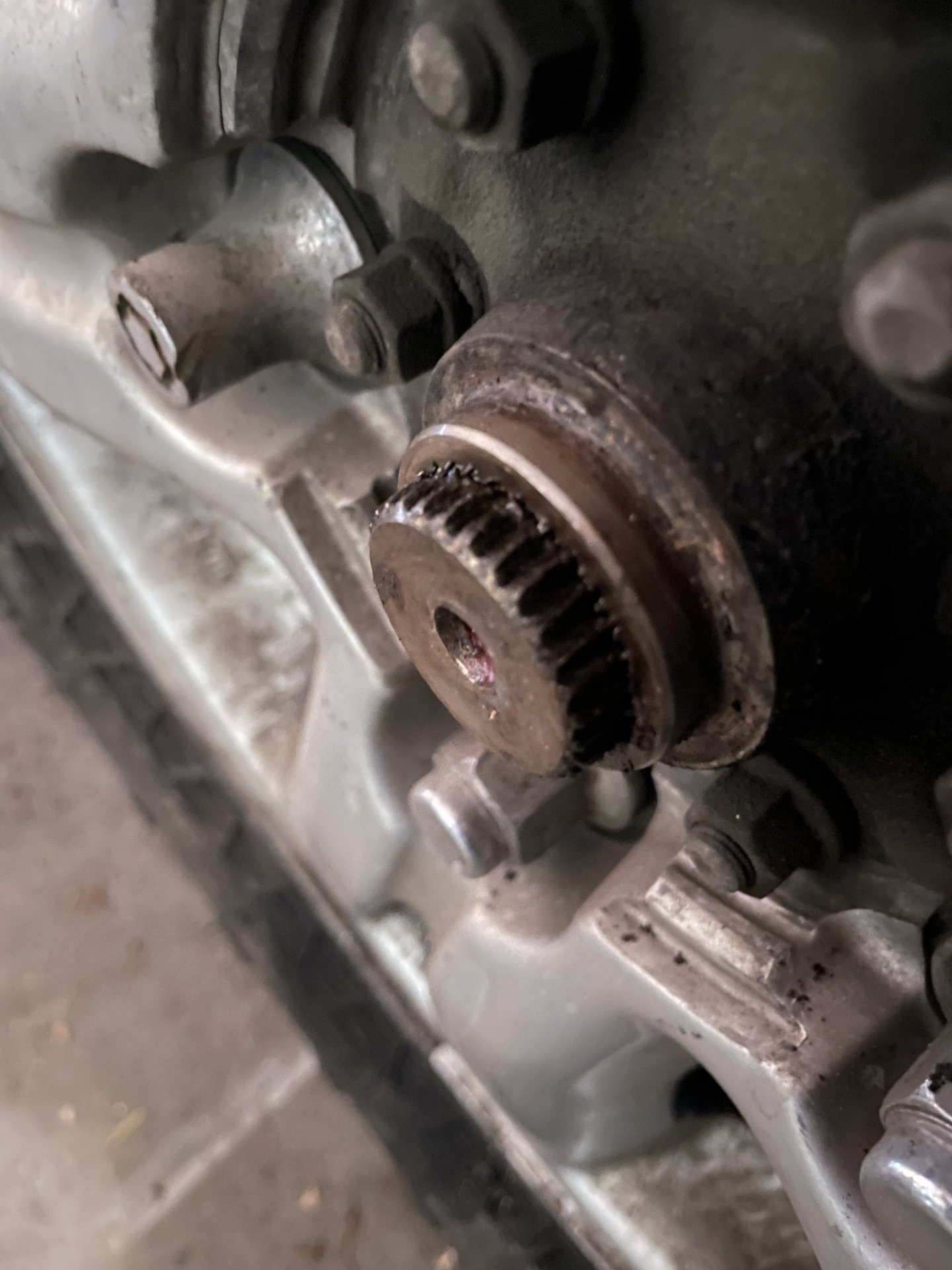 Splines looks a little shaved, but not flat (but also looks like they need new grease). Get new clips in the different sizes and throw a new one on.

Trunk Monkey said:
Splines looks a little shaved, but not flat (but also looks like they need new grease). Get new clips in the different sizes and throw a new one on.
Click to expand...

Ditto on the grease, also on the inboard end next to CV looks like it could use some grease, there is a bushing and needle bearing in that end of the spindle. 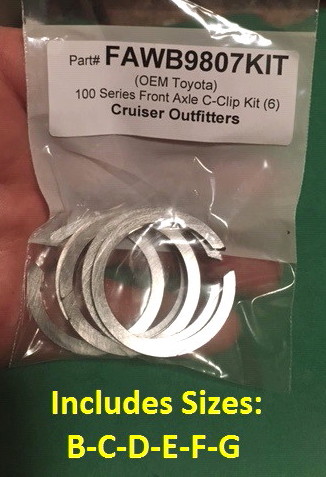 Yeah cruiser outfitters seem to be out of the flanges, so I just ordered flanges, assorted clips, cones nuts and gaskets for both sides from toyotapartsdeal. Will also pack/torque the bearings when I'm in there. Feeling generous now that a diff is not on the docket.

Zer0zg said:
Yeah cruiser outfitters seem to be out of the flanges, so I just ordered flanges, assorted clips, cones nuts and gaskets for both sides from toyotapartsdeal. Will also pack/torque the bearings when I'm in there. Feeling generous now that a diff is not on the docket.
Click to expand...


Just checking that you are including greasing the needle bearing in the spindle, as they are different than wheel bearings. Posts on this forum say how to do it.
Z

Good point, thanks for the heads up.

I would replace the axle seal - I had the same thing happen (CV pop out) and did not realize the seal was damaged. Unfortunately it leaked enough oil that eventually my ring/pinion became noisy. Replaced front axle with salvaged unit (about $750 shipped) and all is well.

Skidoo said:
Just checking that you are including greasing the needle bearing in the spindle, as they are different than wheel bearings. Posts on this forum say how to do it.
Click to expand... 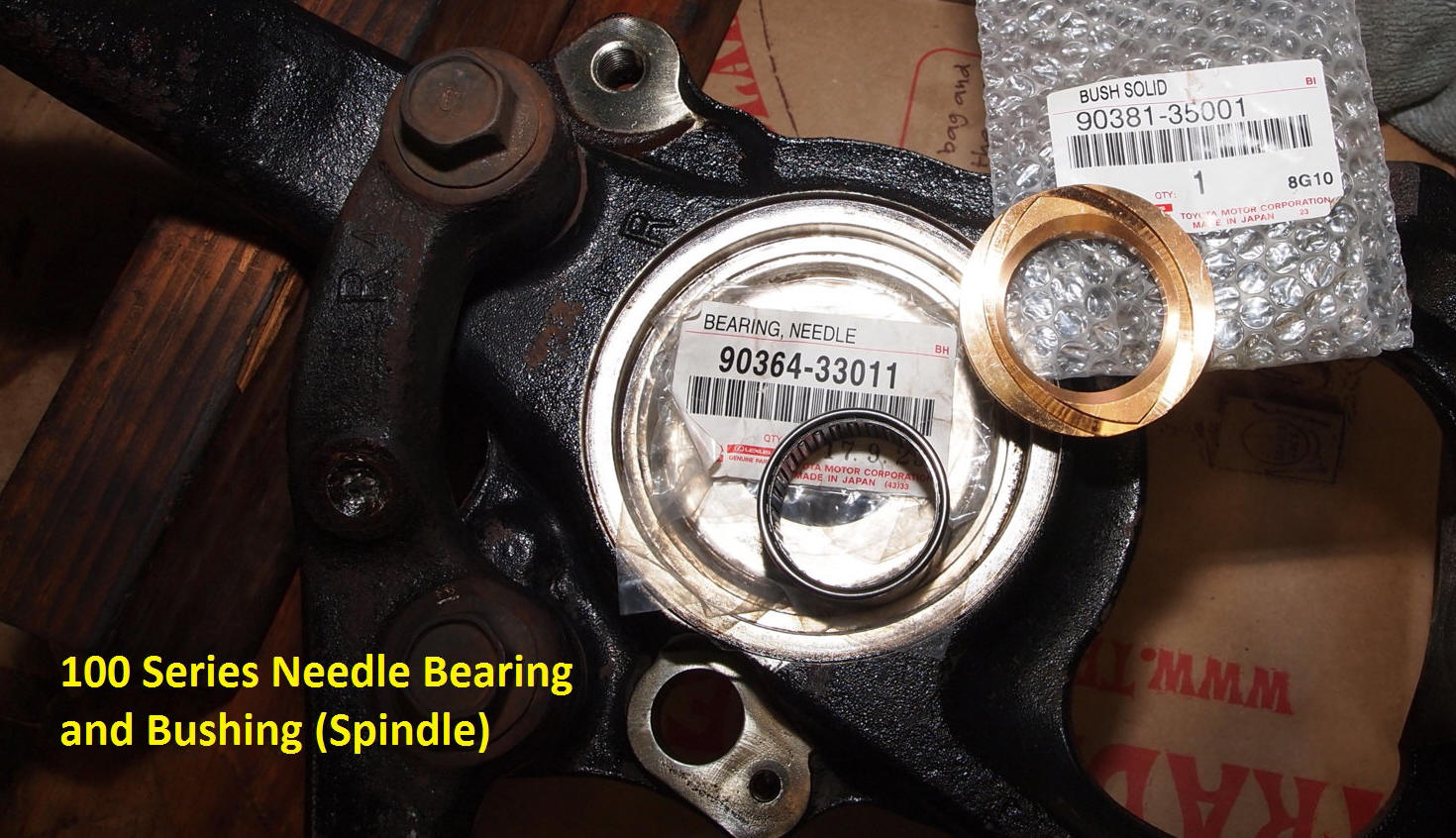 Wednesday at 10:23 AM
trdcorolla
T
L
Potential LX470 purchase - such as thing as too much service history?

Wednesday at 10:23 AM
trdcorolla
T
L
Potential LX470 purchase - such as thing as too much service history?