Okay, so little follow up tonight for those keeping track.

I parked the truck on a level surface to get a more accurate reading of the oil level. I think last night I put in close to half a quart, maybe a splash more. Tonight, I put an additional half quart in and let it run and took the reading 5 minutes later. It's a hair over filled, but apparently at my rate, it won't be long before I'm down (I think time will show 200 miles is going to be an exaggeration).

I started it up for the first time since yesterday (not my DD) and monitored the exhaust fumes. I have some pictures to show a little bit more on the smoke. Don't forget, the light picks up the smoke quite well. It smells "sweet" but not like baked cookies (some would describe as a blown HG). Also, it appeared to be more whitish in nature - not blue.

I'll continue to monitor it and will post back more pictures as I clean the engine bay - bought some Gunk HD Gel degreaser at the AutoZone.

Also, you'll note one drop of oil in one of the pictures. I will monitor that too over the course of the week and will drive it to work one day.

Onto the pics once I can get 'em loaded. 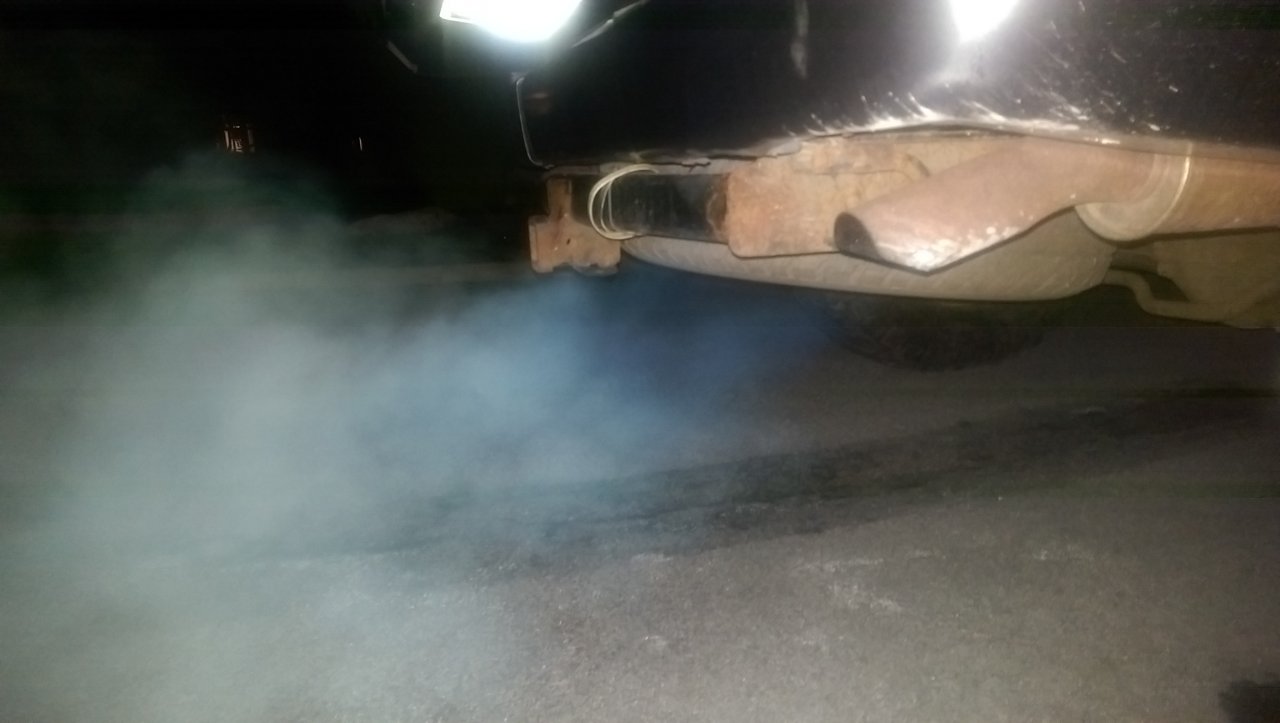 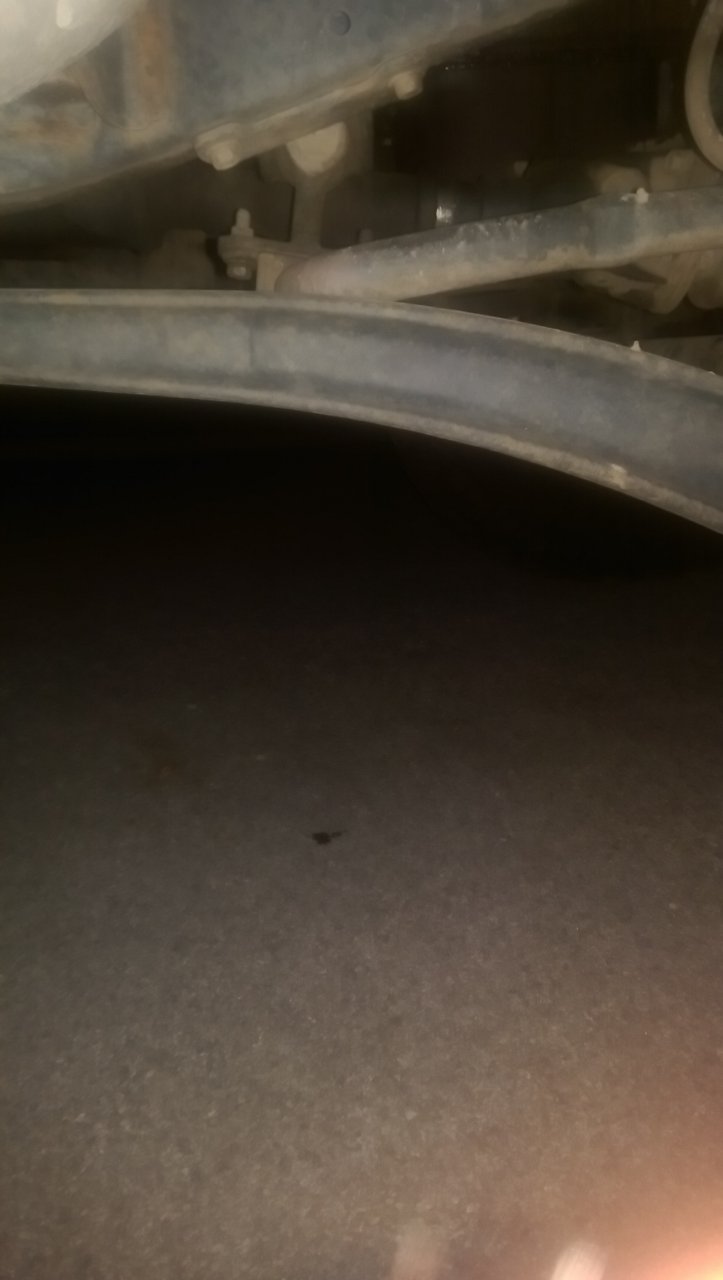 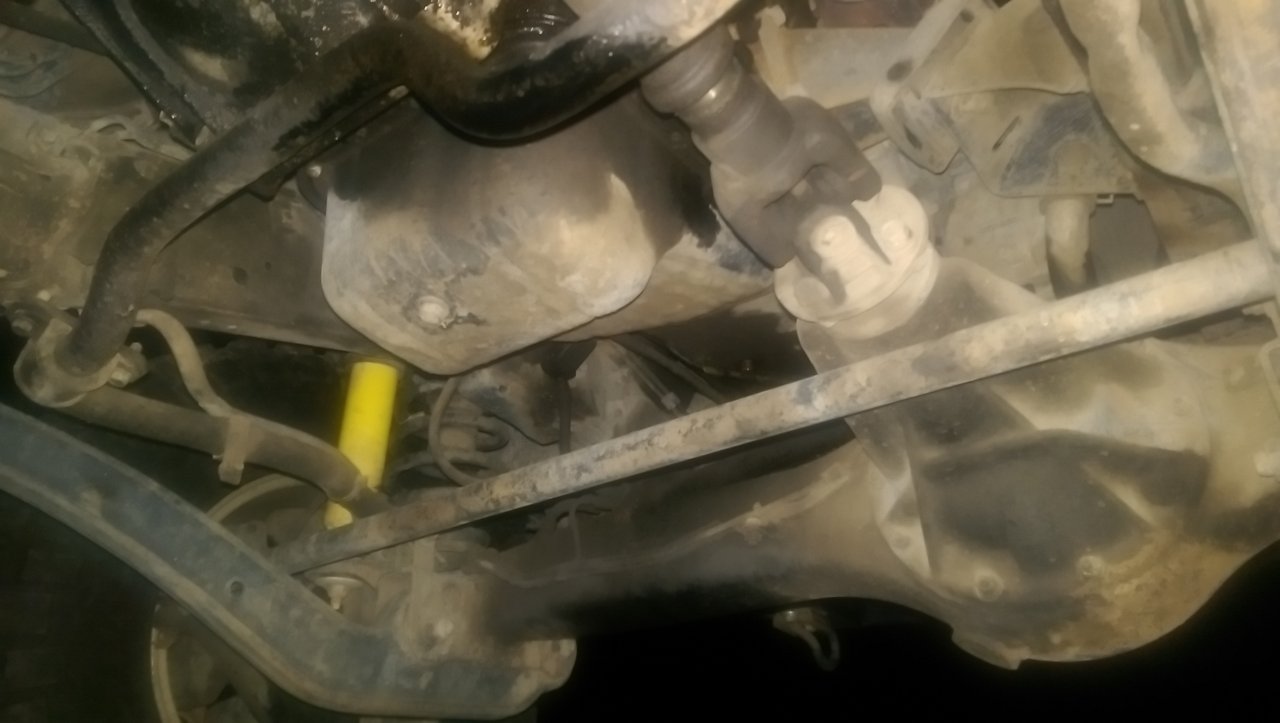 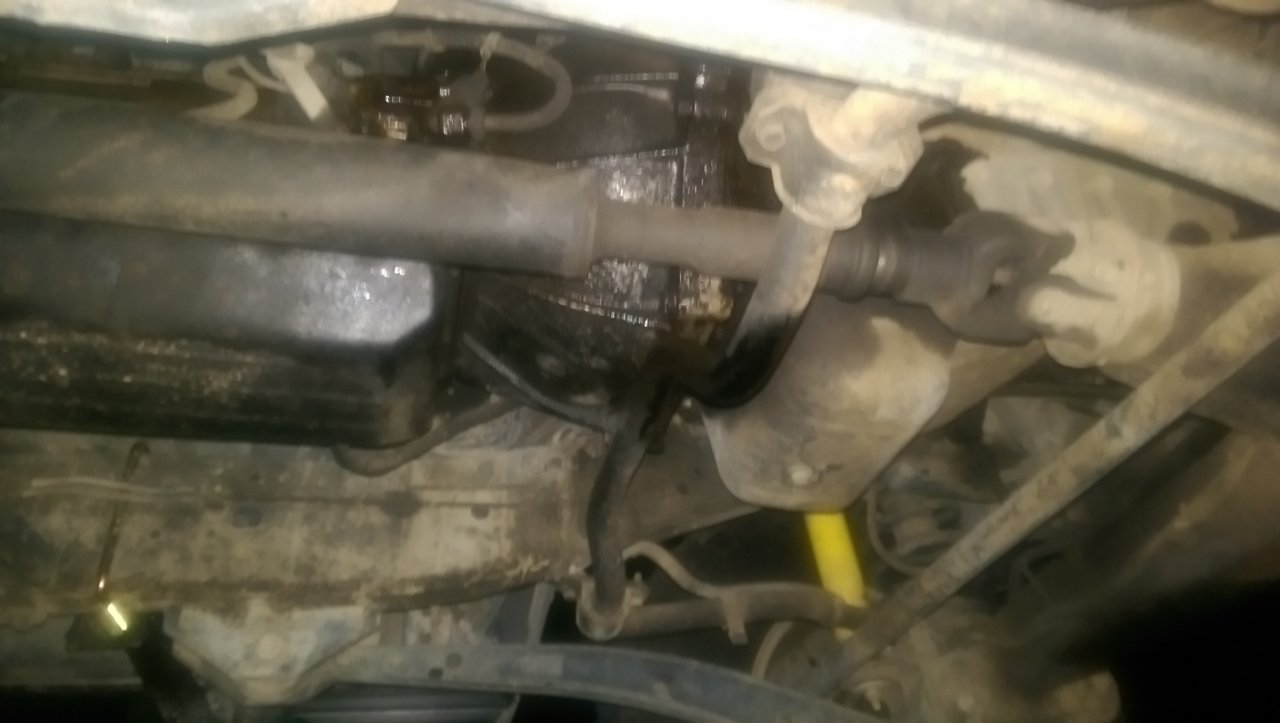 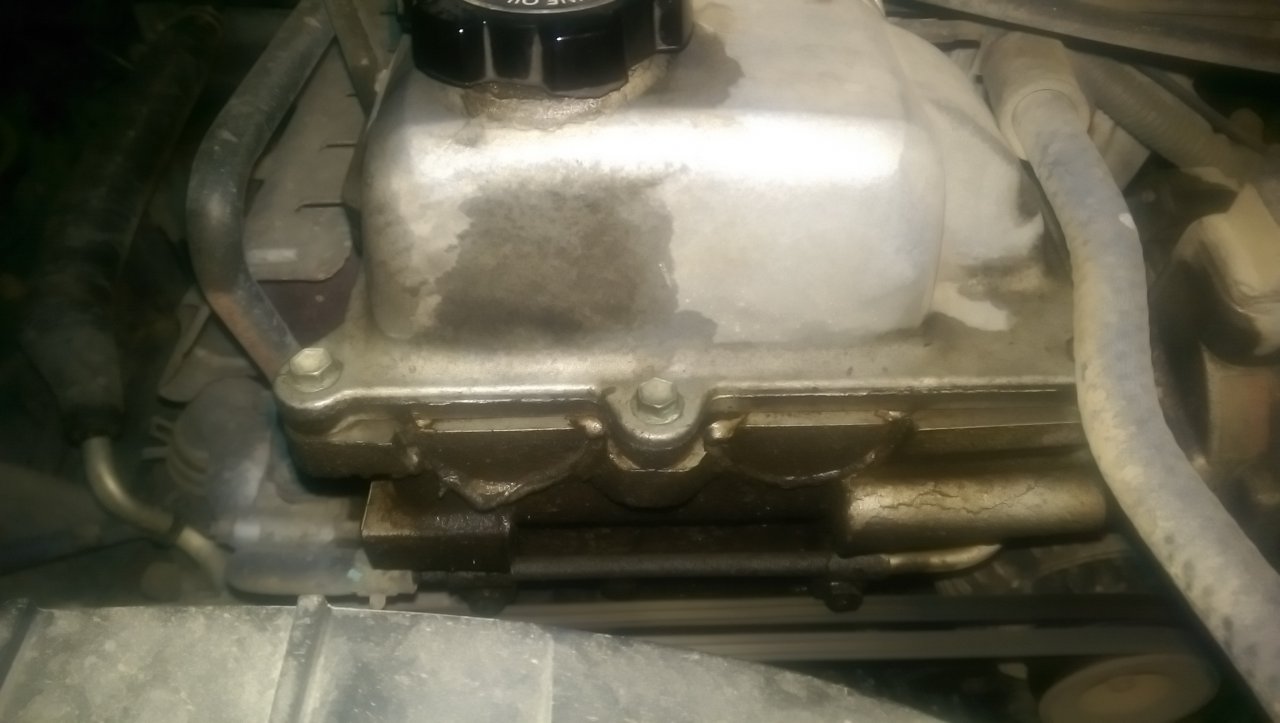 Looks like the sway bar is soaked. I hope from the back of the valve cover and not the rest main or pan 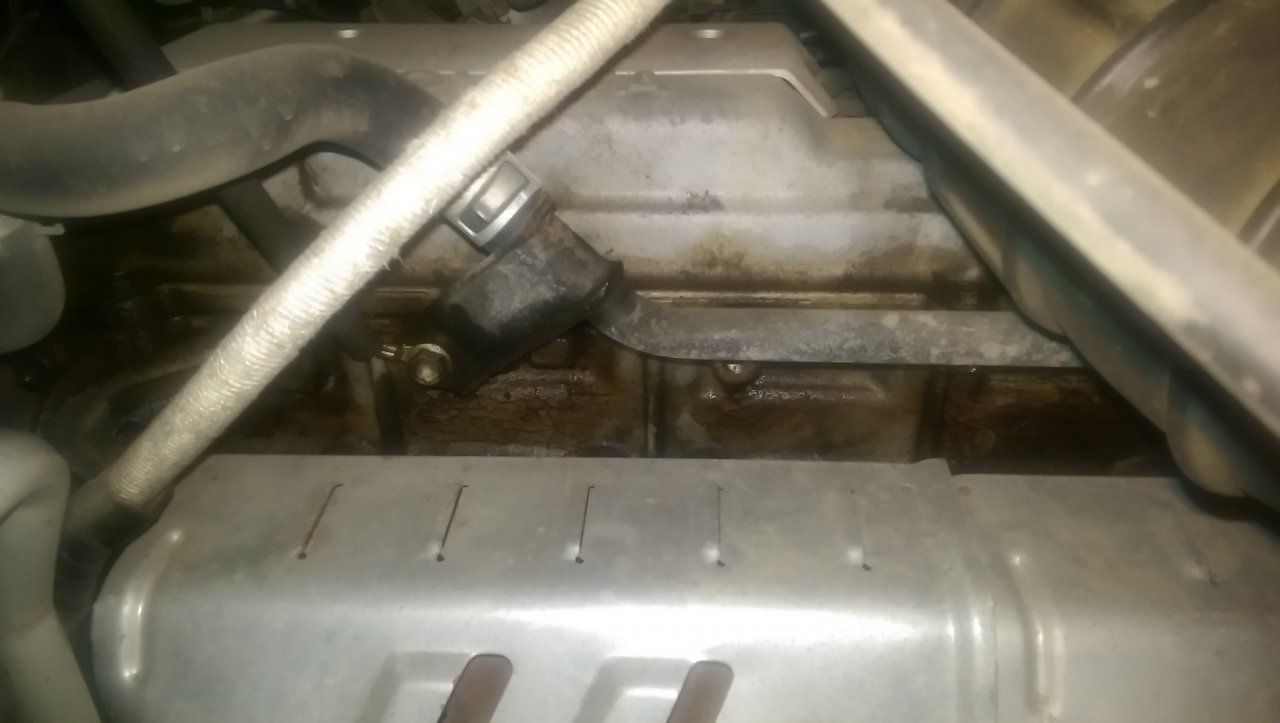 looks like upper pan arch is leaking. Very common.
You can take an oil sample and send out to analyze. They will tell you if your hg is bad or not. Or buy a kit from autozone to test the coolant.

Now that one I know is no fun to replace. I've read the threads.

I guess I won't know for sure until I wash it but is that my major concern here or the valve cover?

I'm eager to see just how many miles I go before I'm empty again. Could take me a few weeks to report back on that one

Be extremely careful when you wash your engine. Keep the water away from the top of the valve cover and the intake manifold. If you get water in the spark plug tubes they will ground and your truck will not start until you dry them out. If you get water in the main engine electrical harness you may experience shorts to ground as a result of cracked wiring insulation. Getting the harness out to repair the cracked insulation is a bitch. I would suggest an organic solvent such as Stoddard, Naphtha or denatured alcohol for that area. They dry pretty quick and you want it dry before you try to start it.

Before i did my valve cover gasket i had these same symptoms blue smoke, oily engine, slight loss of oil. If u check ur spark plugs it should show that oil is seeping past your spark plug tube seals. When i removed the vc i found that the seal was cracked in three places. Did the vc seal, the sparkplug riser seals, two half circles, new pcv valve seal (ishino set 30 bucks an amazon) also had to do the throttle body for access and redid every vacuum hose with silicon. Perfect time to clean throttle body and plenum. Guess what no blue smoke as the seals on the spark plug tubes no longer seep excess oil into the chambers. Took 4 days of 4 hrs for this one banana guy.
You must log in or register to reply here.

Does Motor oil have a shelf life?

A surprise after removing cylinder head for preventative maintenance
2