Had a similar problem the summer after high school. Brought home a cherry Austin Healy two-seater. Had to take it back after Mom said “You’ll kill yourself in that.”
A few days later I convinced her a used turbocharged Corvair Spyder was an economy car.
Problem solved.

Must have been before "unsafe at any speed"

Megadoomer said:
Must have been before "unsafe at any speed"
Click to expand...

RUSH55 said:
I don’t think they lent themselves to modifications very well. I think they had some weird IFS that scared people off.
Click to expand...

My Ex had an 88 trooper. Thing had it’s perks: super roomy, decent on gas(~20mpg), comfy for its day and lots of clearance. Unfortunately it had a dog of 4 banger( GM I think). Not enough power and ate head gaskets at every meal. But it got us across country and even waited for the 40 to stop at every gas station in sight...

RUSH55 said:
Funny, this literally came out 2 days ago - 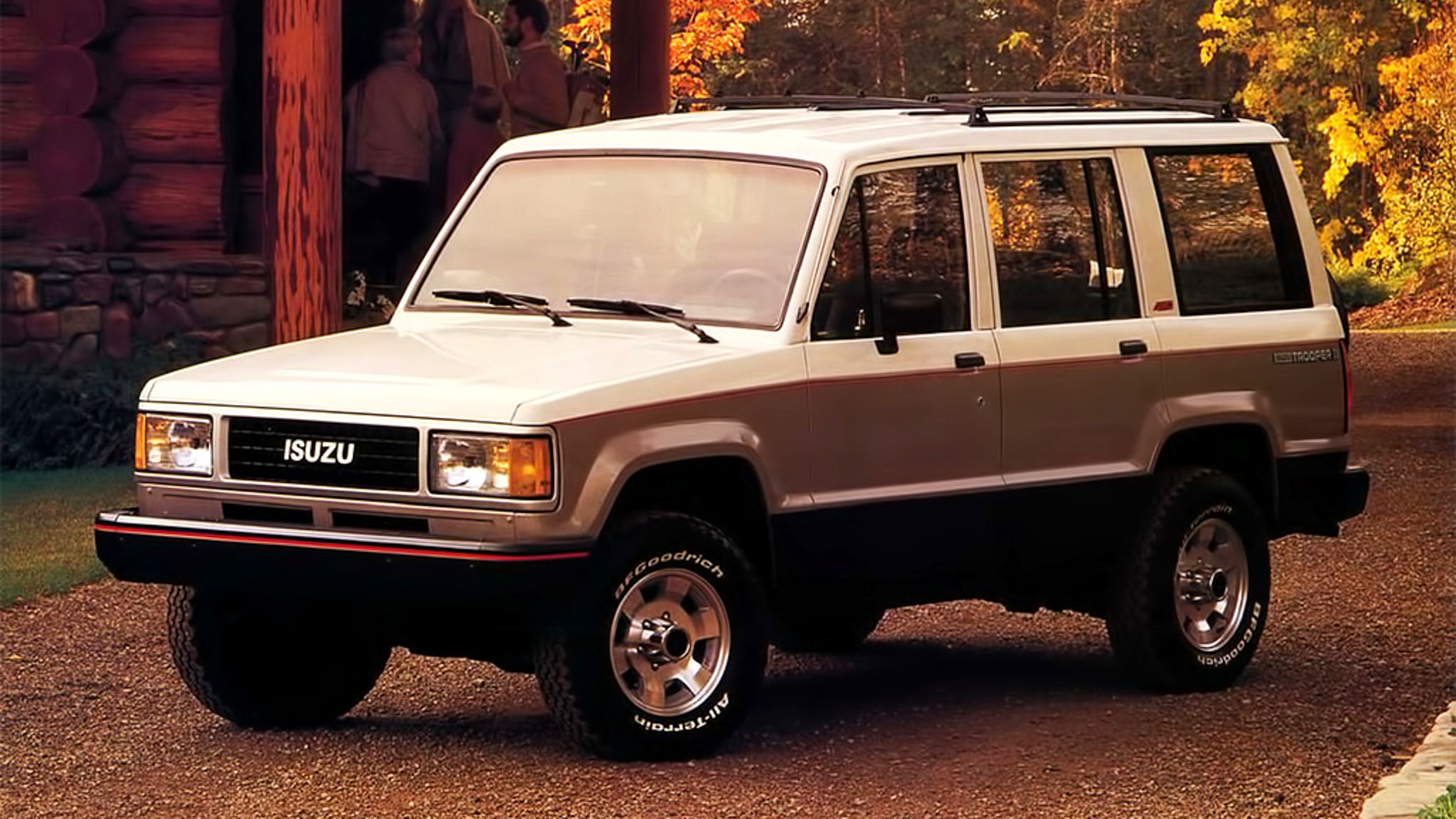 A brief history of the Isuzu Trooper, along with some fun facts, buying tips, recent auctions, and tons of info about the rugged Japanese SUV

So off roader history in our family was Pig, then Cherokee Chief, then first gen Trooper with the V6. That trooper was neat but a total dog, mostly mom’s mall crawler but it did perform quite good off road, it had a possi rear that helped it a lot...but the V6 was anemic.

I started out at 15 with a couple of cheap bugs, cut the fenders and throw a running motor in...wheel until something broke, dispose & repeat. This was while dad & I were building up the Baja over ~5 years. My brother built a Ramchrger up with a 440, but couldn’t keep axles under it for long, was a ton of fun though. Full time 4by and it would drift sideways if you floored it on dry pavement. Back when 31” Mud terrains were a big tire.

Ol Yeller said:
So off roader history in our family was Pig, then Cherokee Chief, then first gen Trooper with the V6. That trooper was neat but a total dog, mostly mom’s mall crawler but it did perform quite good off road, it had a possi rear that helped it a lot...but the V6 was anemic.

I started out at 15 with a couple of cheap bugs, cut the fenders and throw a running motor in...wheel until something broke, dispose & repeat. This was while dad & I were building up the Baja over ~5 years. My brother built a Ramchrger up with a 440, but couldn’t keep axles under it for long, was a ton of fun though. Full time 4by and it would drift sideways if you floored it on dry pavement. Back when 31” Mud terrains were a big tire.
Click to expand...

Crazy how far V6’s have come in the power department. Still doesn’t sound as good as a V8, but much better in the last 30 - 40 years.

riderjgs said:
Talk about anemic V6s, we bought my daughter a ‘93 4Runner with a 3.0 and 5-speed. I used to describe it as having all of the gas mileage and none of the power of a Ford 460.
Click to expand...

Oh man, my sister had one of those 2nd gen 4Runners w/ the 3.0. That was the one that would eat head gaskets, eh? I had a 1st gen Pathfinder, also w/ a 3.0 (I think?), we would jockey for position w/ each other going up Eisenhower tunnel on I-70 on our camping trips in the 90's.
Talk about a couple of dogs...

I've been meaning to add to this thread, but it's been a busy week. Anyhow, this is an interesting thread and here's my contribution:

1. So, I've mentioned before that my dad had Land Cruisers when I was a kid. I have lots of memories in the mustard 40, but also vague memories of other ones earlier on. So, just called my dad and his friend had a green 40 that we hunted in as well. I was real young, maybe 7 or so. I posted the only 2 pics of my dad's 40 that I have.
2. First vehicle I owned was a green '73 or '74 Toyota Camry - 22re/4speed. I bought it for like $500. My buddies and I wheeled that car around southern NM. It'd go lots of places you wouldn't think a car would go. It was a blast having a vehicle that was so simple, easy to fix, and basically indestructible. No pics unfortunately.
3. Second vehicle was a '84 CJ7 - 304/4speed (I believe it was a 4 speed). Boo, only had it a few months. After breaking the rear axle and repairing it, I sold it for a decent profit.
4. Third vehicle was a '77 Chevy Cheyenne (350/automatic). My uncle bought this truck new, sold it to my grandfather, and I bought it from him. This was a great truck. We took that truck all over NM. Lots of power and tough suspension and axles. As HS seniors we wanted to go fishing to Snow Lake in the Gila over spring break. The forest service said no access due to snow. Well, as stupid seniors, we made it. It was bitterly cold. We fished, drank beer, howled at the moon, and froze. We had the whole Gila to ourselves. And we almost got stuck a few times. Looking back, it was stupid and really could have gone south fast.
5. So, had to sell the '77 in college because I got married. Then comes the time of 4 doors and minivans.
6. I got my first job out of grad school at Los Alamos Nat. Lab. My wife and I traveled there to look for homes over a weekend, bought one in White Rock, NM, and on the way back to the Albuquerque airport realized I'd need another vehicle. I found a green '74 FJ40 for $750 that needed an engine and was sitting under a tree. It was a NM truck, so no rust. I bought it and had it towed to my buddies house in Albuquerque. I ended up buying a cheap Ford Ranger 2wd a few months after arriving in Los Alamos since the 40 didn't run. I put a 350/SM465 into the 40. It was a great truck.
7. Moved to west TN to teach at a university. More kids and making less money meant selling the 40 on ebay to someone in DC. Funny story that about 5 years or so after selling the 40, someone calls me from Nashville with questions on it. Apparently the 40 went to DC, Seattle, and then to Nashville.
8. No Land Cruisers for about 20 years as we poured our money and labor into a little 9 acre farm. We had chickens and cows. It was a great time and our children have so many fond memories or chasing escaped cows at midnight, killing chickens, killing stray dogs, running through the pasture, ...
9. So, after selling that place, that freed up time and resources for an interest in Land Cruisers again. Since then I've had a '76 40 that I bought from Montrose, CO. Sold that, bought yellow '76 40 from Eagle, CO. Great truck and swapped in an SM465. Bought the '77 55. Sold the yellow 40 for what may be my dad's old '76 mustard 40. We also bought a '82 40 that needs a lot of body work that we're doing as an investment. Bought a parts 40 also. So, I have 3 40 right now. I hope to sell the parts truck soon and get the '82 fixed and sold in the next 6 months or so. Definitely keeping the '77 55 family wagon and the mustard 40.
That's my story. 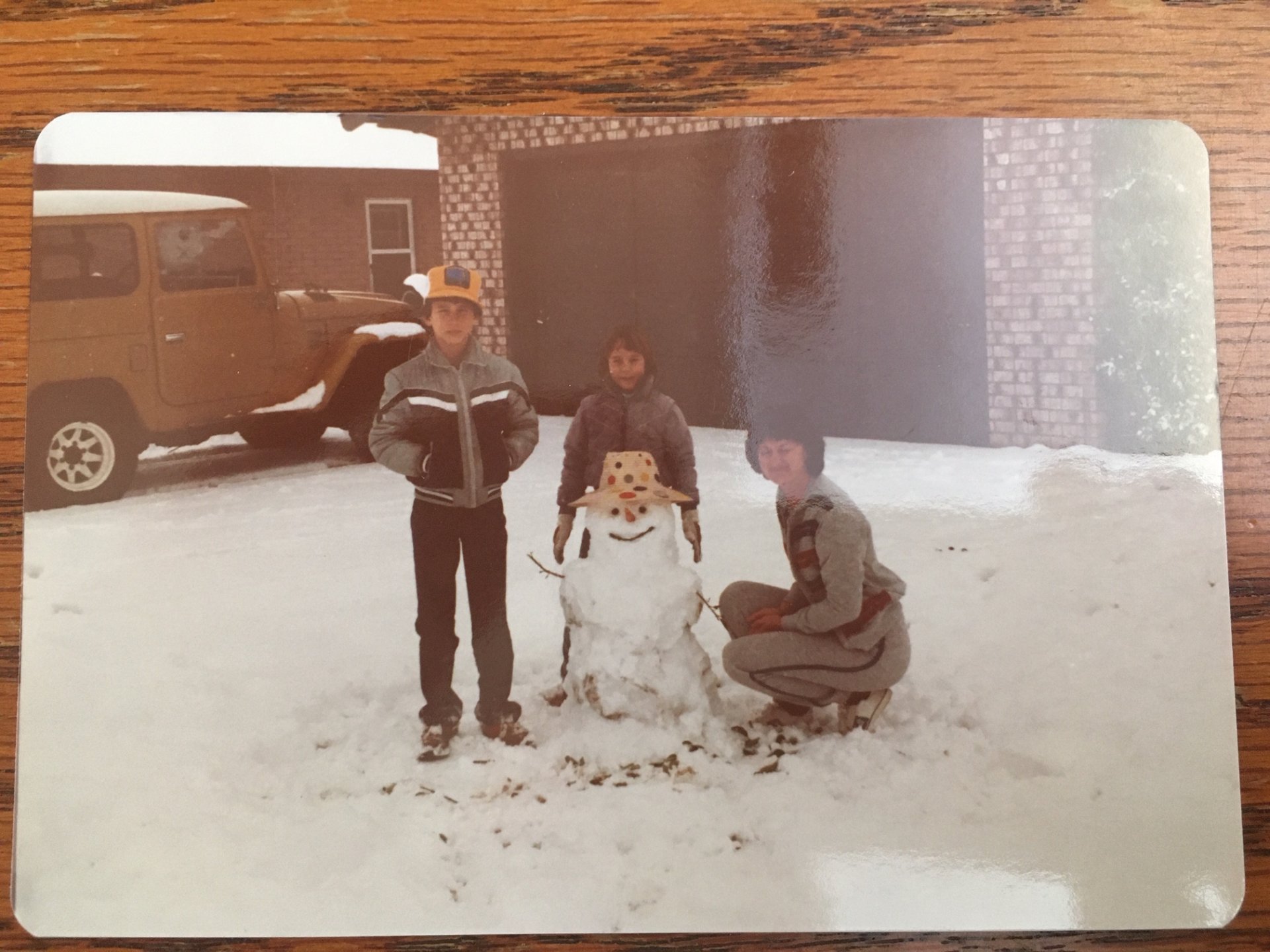 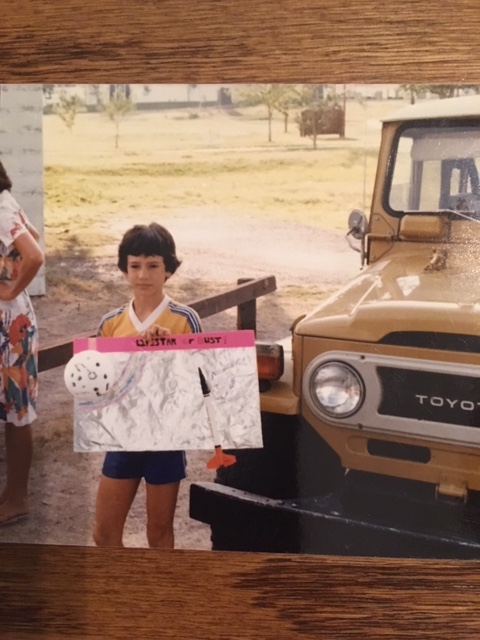 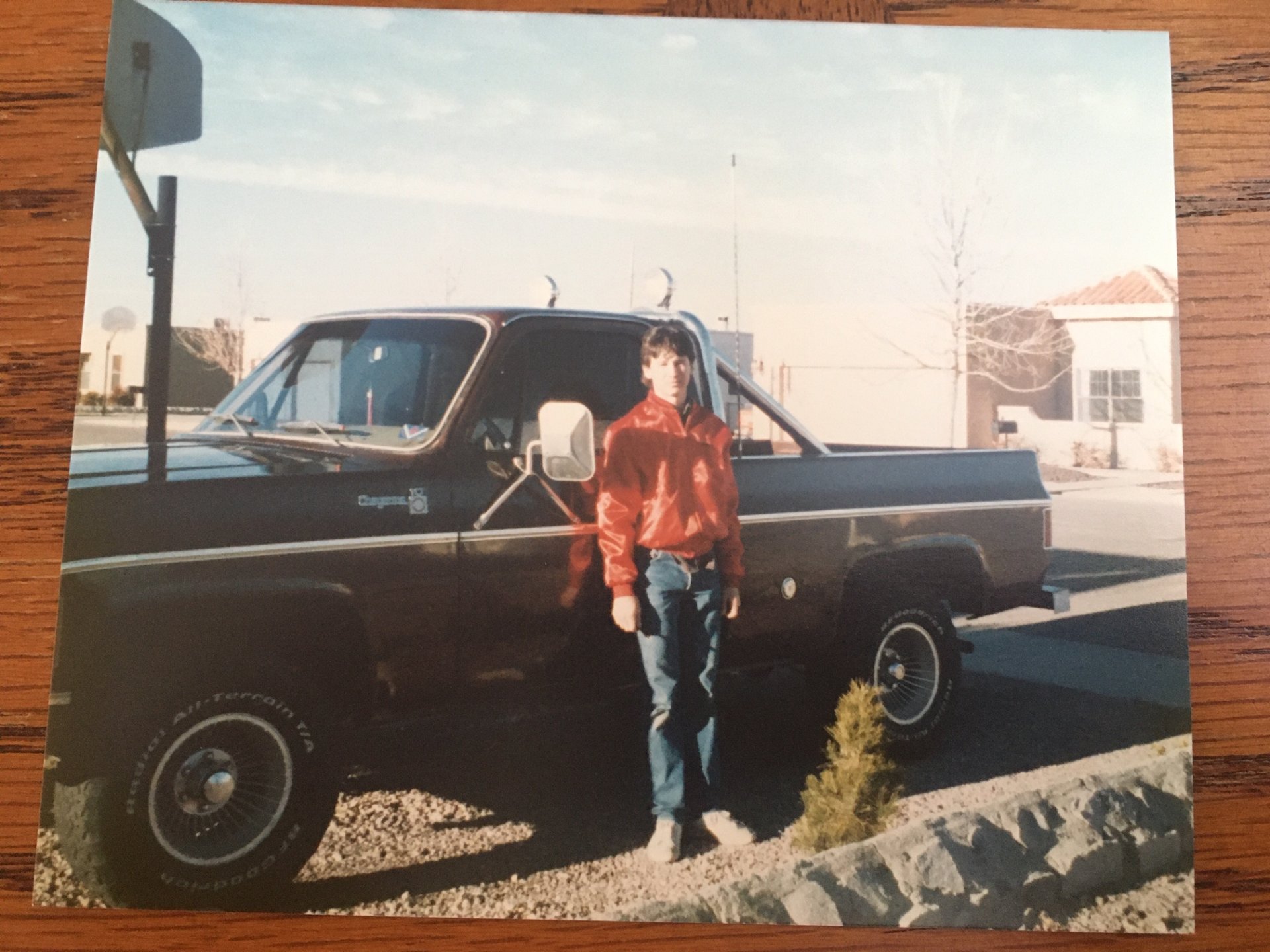 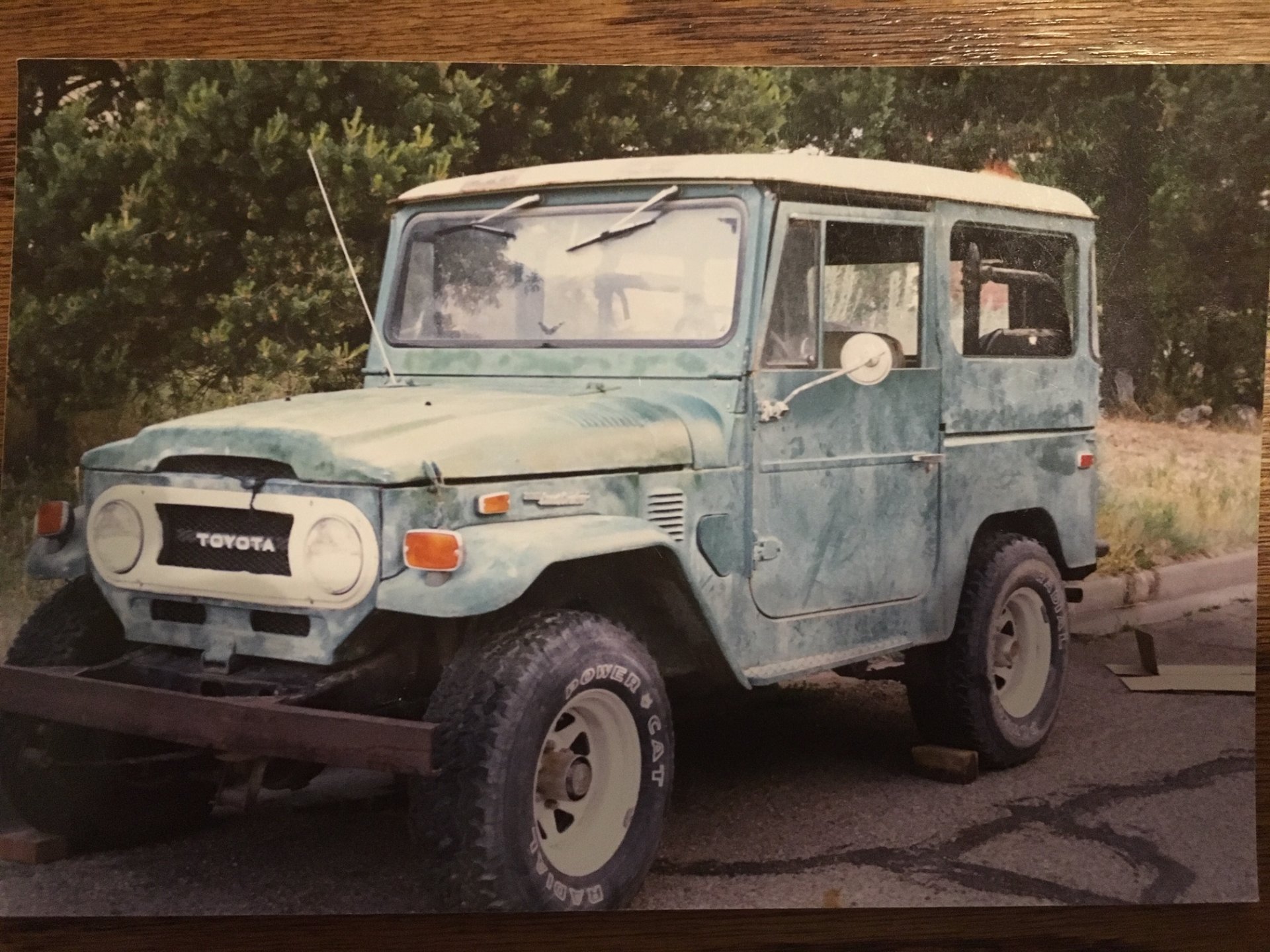 is that a Mullet in front of Cheby

Oh, the days when I could grow hair! Youth is wasted on the young!

That 77 was a nice looking ride

Square-bodies are somehow all the rage again. That truck in that condition would be worth quite a bit now.

Love this thread! Have had this picture of my Dad with his Dodge Power Wagon forever. Get him going and he never stops talking about that one. Not really sure the year, as it was gone before I was around. Mid 60s maybe?

When I was in high school and I'd visit him for the summer, he had a lifted 72 Blazer with a softop I used to get to drive as my own. The suburbanite kids from NY and Jersey used to look at me like I drove in straight from the set of Deliverence! More of a BMW crowd. That was a fun truck, granted a rust pit!

My first ride in the early 90s was an 87 Nissan Pathfinder. I was more focused on the sound system at 16, but that truck was great in the Colorado snow and always got me to the slopes for the powder days safely. That triangle window they stole from the 2 door 4Runner was just cool! It sent me on a long journey of Japanese truck ownership: 95 4 Runner, 2001 Tacoma, 93 4 Runner, 07 GX470, 11 GX460 (the current family truckster), 05 Sequoia (my daily) , 09 Tundra (totaled in a t-bone mess), 11 Tundra.

My most memorable 4x4's other than my current Pig, was a 69 Chevy K10 and a 94 OJ Bronco! Didn't have the K10long. Ran out of money and sold it before I moved away from AZ, but the Broncos was a reliable friend for years. Oh the memories! 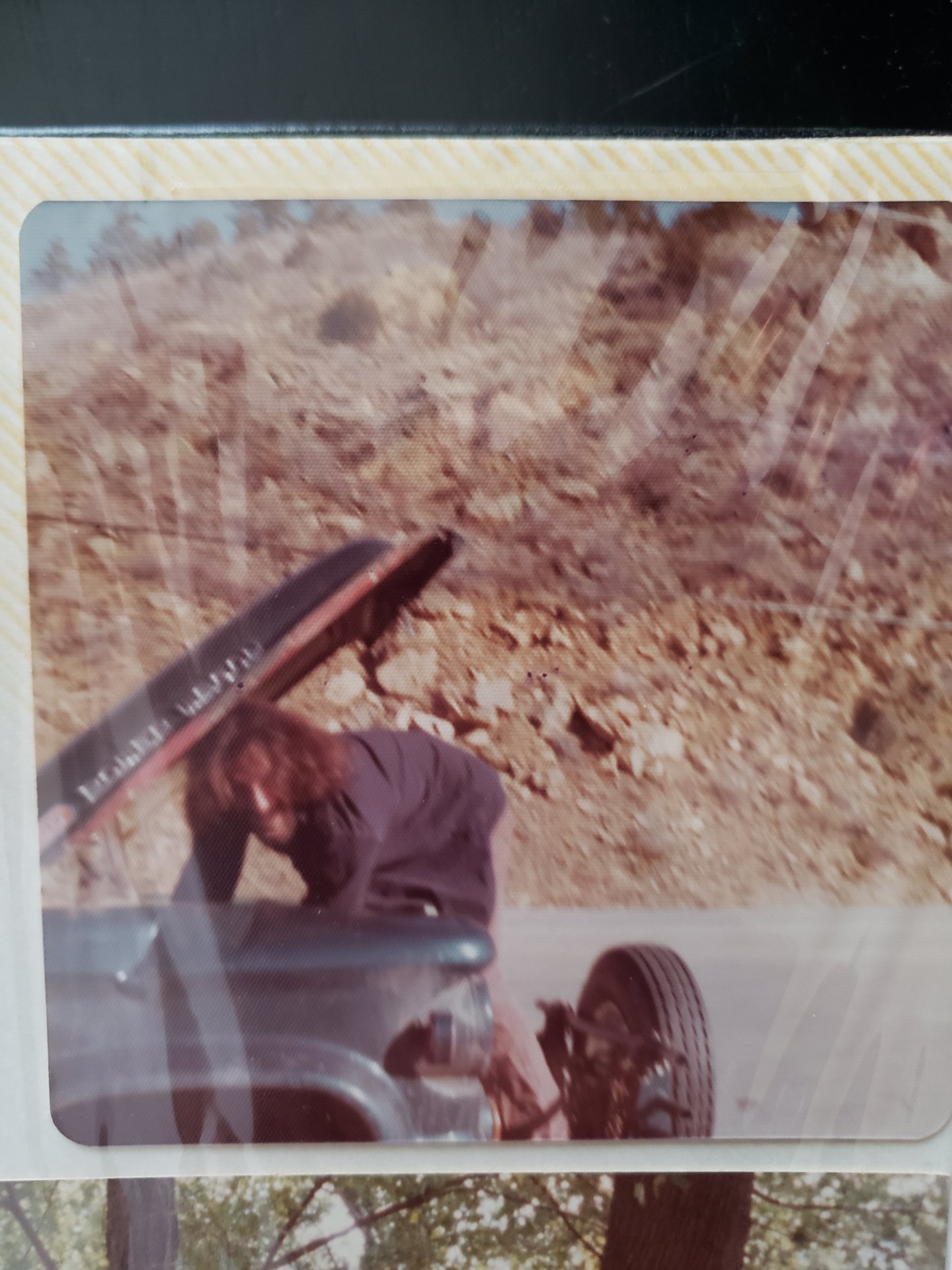 Dodge Power Wagons have always been pretty awesome trucks from their inception waay back in 1945, with a lineage originating in the military (like our beloved Landcruisers).
Those 60’s models are an acquired taste, but they sure were tough!

International Travellall . So a bright Orange 1 for sale.

bobm said:
International Travellall . So a bright Orange 1 for sale.
Click to expand...

I drove past one here for years, I could have ended up with it easily instead of the pig had I been ready back then.

Great memories in this thread.

I’ve owned many different varieties of 4x4 with the exception of Chebbys. One of my longest owned (13 years) and favorites was my 61 Dodge town wagn power wagon. Especially after putting the Cummins 4bt/nv4500/205 combo in. Mid twenties for mileage and minimal rust. Both of my boys were getting interested in land cruisers , so I got back into them. This pic was taken on the way back from Montrose with a frame cut first gen Cummins set up. Plan was to put that set up into AuPig. Changed that plan to the current set up, still underway. Might put the Cummins set up in the 60 series ,if I live long enough. 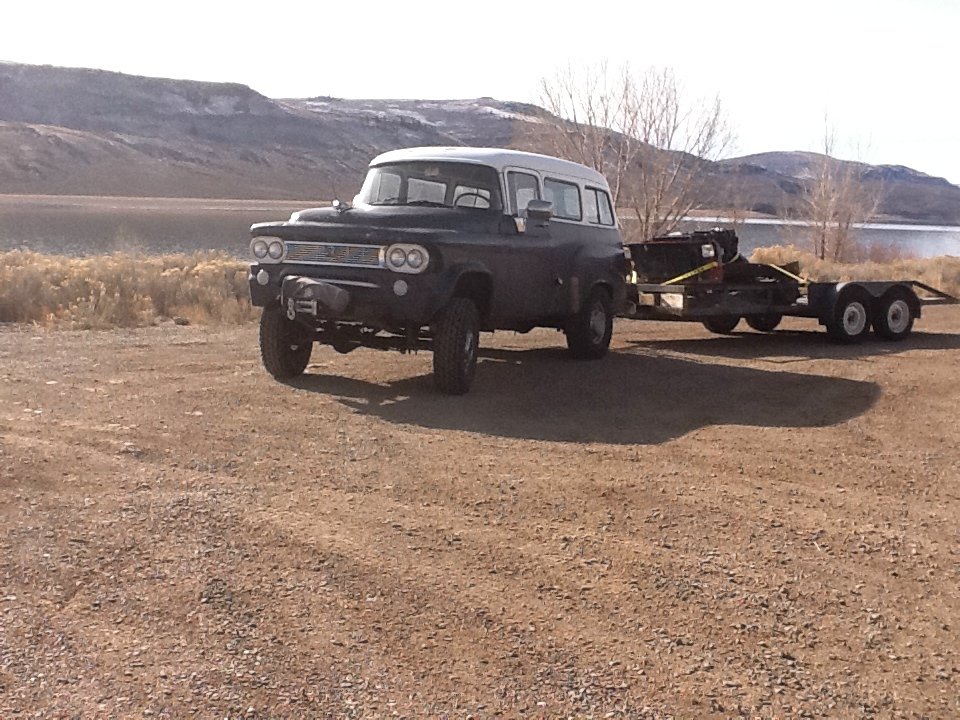 You'll be around to do it!
You must log in or register to reply here.

Anyone have an AC crimp tool they'll rent?

For Sale Colorado/Washington Pigs on CL - NOT MINE