this video is now practically a meme in the local off-road community. Then I see what looks like an 80 series in the back. But the video is bad.
Are these ONSC or UC members? If so can anyone explain why? I cant get the link to work. If you don’t know about it, these folks used a tow strap to remove a rock from the middle of the trail. An off road trail. In an off road park. Where people “rock crawl”. Help me out here. I’m not stomping toes. Just really hope there is a valid reason to de-rock a rock trail. 😎 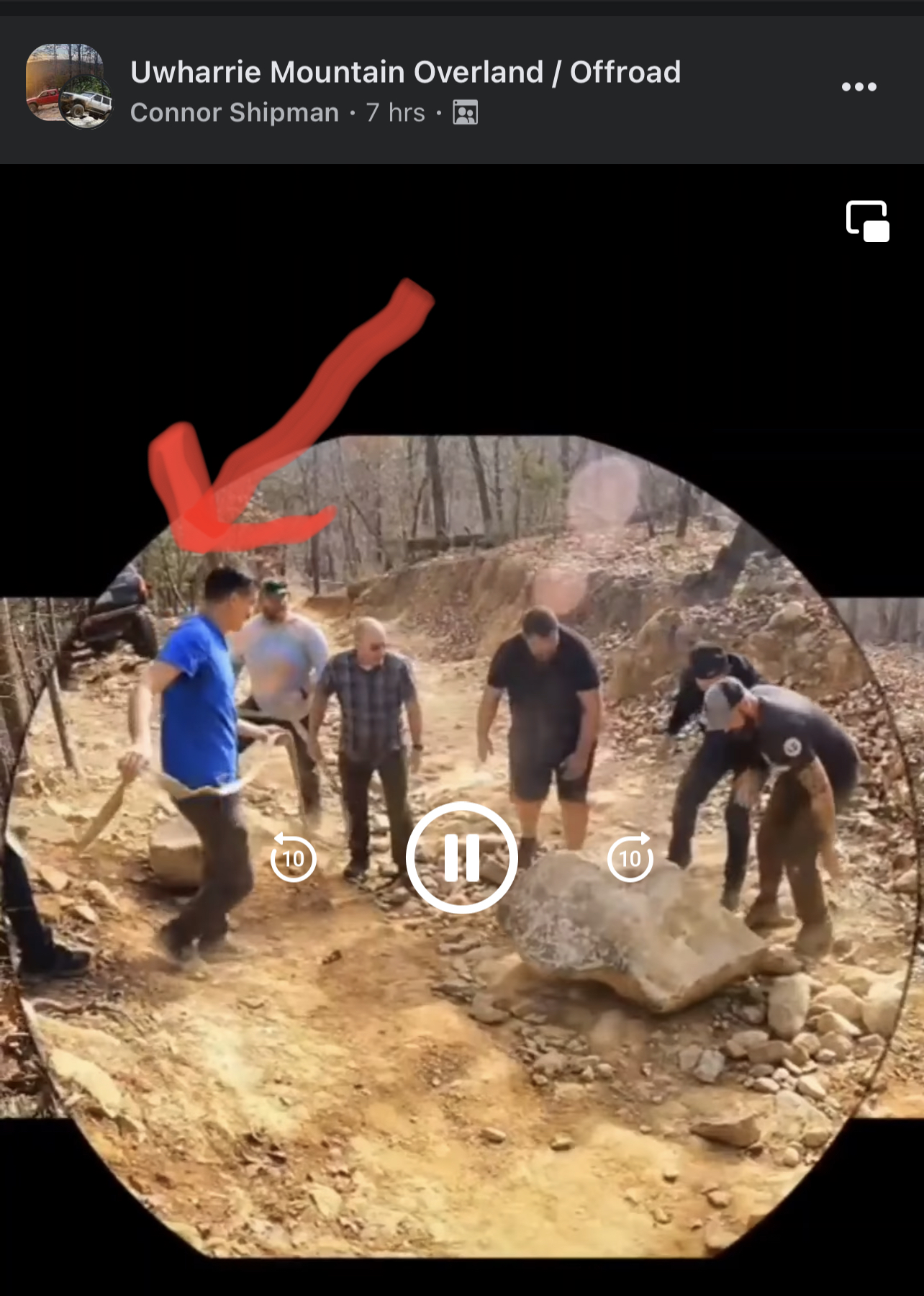 So that’s what happened! I noticed the rock had been moved recently and I also knew it would have taken a lot of work to move it. That rock has moved and shifted quite a bit over the last couple of years…most likely by folks’ front differentials. While I agree the rock should’ve been left alone, it doesn’t hurt my feelings too much that it has been moved. It was smack in the middle of Falls Dam (considered an easy trail) and it forced drivers to take a hard line to get around it. It was not attached to anything below ground…just sitting on the surface. Nathan smashed in his PS rocker trying to navigate around it about a month ago. I don’t recognize any of the guys in the pic as ONSC or UC folks.

The forestry service comes in with dozers and moves dirt around on the URE trails practically every winter. Some trails get changed so drastically that you can’t recognize them from one year to the next. I believe this is done to keep down the amount of bypasses and spur trails that tend to pop up around tough obstacles. While I don’t advocate individuals moving big rocks and changing trials to suit their own needs, I don’t consider this particular incident as a terrible offense. It’s not like they pushed over a Stonehenge monolith or carved their name in a Sequoia tree. These guys may have saved the trail from being dozed by the FS just by moving that one rock. Who knows?
Last edited: Dec 10, 2021
DAVE RUSHING
TLCA #: 22571; ONSC MEMBER
Instagram: rushing.dave
'71 FJ55 "Bucky"; '94 FZJ80 "Cotton"; '84 FJ60 "The Turdle"

I agree with Dave. Those guys might have just viewed it as "an obstacle on a trail that is marked 'easy', so it needs to go away". Not necessarily their call to make but it likely saved many new drivers or owners of brand new, stock trucks a lot of grief. It is, after all, an 'easy' trail, and it would would likely have been removed by the NFS over the winter break during their trail maintenance work. At least these guys weren't cutting down trees to avoid getting a scratch. I've had to prevent people from doing that before. Whole living trees, not just a branch. Sheesh.

I have been asked to join that group twice, did both times, and realized it is a bunch of dangerous (in a silly way) kids who just want to tear up trails so I left both times. Maybe they will grow up and stop their Tread Tashly methods. But Tread Lightly folks, if you can't drive the trail, stay off it, do not change the trail without the FS planning it. We had new stock Honda Pilots on that trail not long ago, it was not that hard....
Izzy Sanchez
1997 Land Cruiser, 1981 FJ43 emotinal support vehicle
I4WDTA® Certified Master Trainer Ismael Sanchez , Master Tread Trainer, Tread Lightly
Www.tactegra.com
Overlanding in the Southeastern US
K4WDTA General

izzyandsue said:
I have been asked to join that group twice, did both times, and realized it is a bunch of dangerous (in a silly way) kids who just want to tear up trails so I left both times. Maybe they will grow up and stop their Tread Tashly methods. But Tread Lightly folks, if you can't drive the trail, stay off it, do not change the trail without the FS planning it. We had new stock Honda Pilots on that trail not long ago, it was not that hard....
Click to expand...

Stock pilots? Was it a whole truck load from Ohio with different off road tires and a few new MDXs?

I agree - do not change the trail without FS approval. That group needs to move on to the next trendy thing blowing in the wind.
2023 Overlander Project Events - Events - https://overlanderproject.com/collections/events
2004 - UZJ100 - Triple Locked
IG - @andrewroane100

Had someone on that page finally send me the link to a video of the guy who made the “command decision” (his words) to move that rock. All I can say is wow. If I can’t get the link to work I will Post it. Yeow

here is private command decision in all his glory. NOT SAFE FOR WORK OR KIDS. PROFANITY LACED TIRADE!!!
I have Some favorite lines like “even my rig”. And “command decision”. I’m not ranting folks. I agree With you guys. But this is kinda funny.
It’s a Jeep thing, you wouldn’t understand?

Uwerreee, lol it was a public safety issue per his description.
Thomas S

They claimed that it was shifting as they tried to navigate over it and that it was a safety issue to vehicles and people down hill from it. Given the amount of effort taken to move it, its unlikely that it was going to roll downhill, but I wasn't there so can't speak to that. It has been in the center of that trail for a while though and thousands of people have managed to get by it. Just seems like commando Jeepers doing it for the 'gram and then got dragged on Facebook for doing so. I agree with Izzy though, the group that has blown up the situation is a bunch of younger guys with beater xj's, tj's, and yj's that just want to go out and go full "yee yee" with no regard to what they do to the trail system in the process.

I don't know. It's hard to pass judgment if you weren't there.

I've been on plenty of trails where friends move rocks to help a truck get up a trail. I've also been on trails where I winch off a rock that I thought wouldn't move, but it did. I've also been on trails where I end up moving rocks with my truck (intentionally or not) to get through. There was one earlier this year at fall crawl that pogo'd the rear end of moonshine as I moved it a few feet up the trail. Completely unintentional, but it happened, and the trail is different. Ask Del about that buggy trail at Anthracite, lol.

Safety or not, if they took a big ass rock in the middle of what's supposed to be an easier trail and moved it, I can't really blame them. It happens, and it's not damaging the trail imo.

Nathan and I were out there yesterday in the RZR and, sure enough, folks had created a spur trail around this obstacle to avoid having to navigate around the rock. Now that it is moved, there’s no real reason for anybody to use the spur trail to bypass it, but they are using it anyway. We saw two Jeeps coming around the bypass yesterday just because it was there. This rock moving situation comes down to the lesser of two evils. I know moving rocks is not “Tread Lightly approved,” but if the moving of a big, loose, offensive rock prevents the creation of a spur trail through the woods, I think the rock is less important. It doesn’t matter much now though. Spur trail is actively being used. I guess we will see guard rail there soon. 😐
DAVE RUSHING
TLCA #: 22571; ONSC MEMBER
Instagram: rushing.dave
'71 FJ55 "Bucky"; '94 FZJ80 "Cotton"; '84 FJ60 "The Turdle"

Thats what I was thinking. Use the rock to block the spur trail/bypass.
Time will tell, but I see more guardrail
David
1989 FJ62 35" bfg km2's, rear Aussie locker, 5"alcan springs,1.5in longer shackles, 4 plus shackle reversal.

Yeah, FB has been making sure I'm seeing this tirade of back and forth (some of them are quite hilarious like the inclusion of the Rock 'n Roll Express to the memes! I must have clicked too many times to view it, now I can't NOT see it, thanks FB algorithms!

I've debated on leaving the group just because it's this, or "Who's going to Hurricane Creek this weekend", Or "How do I get to Hurricane Creek?" But, it's a perfect example of how fragmented we are as groups (and how we get that way) and how easy it is for us NOT to be united when trails are being threatened for closure.
It's really no surprise to me that we're really a drinking club with a Toyota problem.

the TLCA just put through a 5000$ grant to the KYTLCA to help with trail upkeep (it's complicated - if you want to know, let me know). The KYTLCA is matching that grant.

If we as a club want to get involved in funding a trail maintenance and awareness fund of some type, we can definitely get TLCA support. I know the marketing guy....

That said, that's a lotta work. Anyone willing to step forward with this or any other part of the ONSC process, please let me know. Getting support for Relic Run, helping organize the events, working with URE trail people, etc.... PLEASE LMK!!!! I have beers and high 5's with your name on them!
Official IH8MUD and Club Merch: SHOP REEFMONKEY
VP - Marketing TLCA (1/21-present)
Events Coordinator - Olde North State Cruisers ('18-present)
TLCA# 23993 - 4 kids, 3 cruisers, dogs, cats, fish and a reef tank

That group also regularly rents Big Creek, private trails. I was there recently with a private class, haven't been there in about a year, and the place is really trashed. It is a shame, as it was difficult but maintained and pristine trails. A wiseman once said "It is unfortunate how much ignorance is embraced in pursuit of freedom".
Izzy Sanchez
1997 Land Cruiser, 1981 FJ43 emotinal support vehicle
I4WDTA® Certified Master Trainer Ismael Sanchez , Master Tread Trainer, Tread Lightly
Www.tactegra.com
Overlanding in the Southeastern US
K4WDTA General
You must log in or register to reply here.