When I bought my1972 FJ40 about a year ago, I had a local mechanic replace all the belts, hoses and such as is had been sitting for years. After a few weeks on a stand cleaning the frame and replacing the wheels/tires, I thought I'd take her for a spin.

Before I closed the hood after cranking it up, my son pointed out a "fluid leak". Seems there is a hole or split in the line that connects the metal piping from the fuel pump to the weber carb. Needless to say I quickly cut off the engine instead of closely studying the exact point at which gasoline was spewing from the hose! So much for trying out the new wheels.

Are there any particular specifications for this fuel hose that I should look for or should I just go clamp on another hose that looks like the last one? 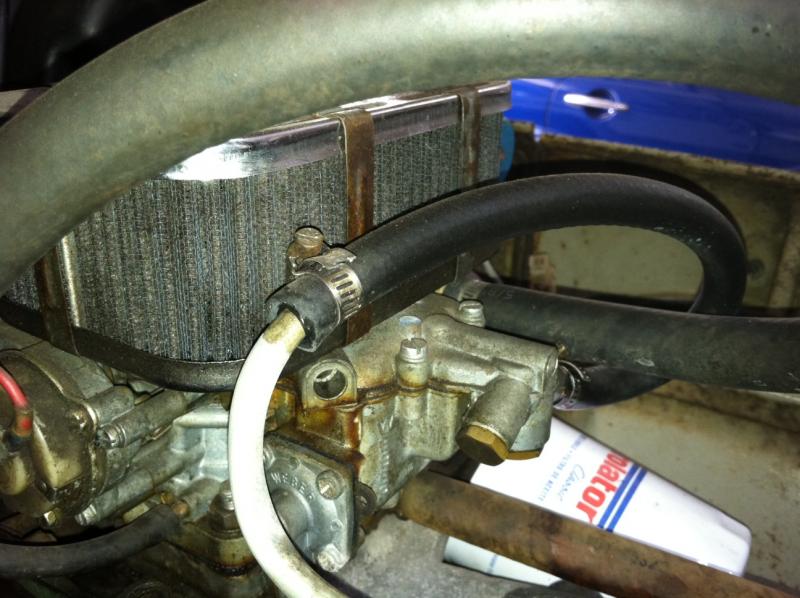 That is not an original carb, so matching up parts is pretty generic. Looks like the mechanic grabbed up the first piece of 1/4 or 5/16 hose he could lfind and slapped it on there. You just need a new piece of actual Fuel Line, available in any parts store. I would tighten up the clamps also. Looks like it has been dripping for a while due to the stains on the corner of the Weber. John

They probably just cut then end of the metal line off with no flare to help seal the rubber line. I would throw two clamps on it, and tighten both up real good, or replace the line. Should not be a problem running a rubber fuel line from the fuel pump all the way to the carb.

This could be a fire waiting to happen.

Hard line is best or AN fittings with braided hose from the hard line to the carb.
If you keep what you have at least check that the hard line has a bubble flare or some raise portion on the end the tube and change to a constant tension hose clamp.
Hose is OK on the suction side of the pump. MrT had it right so you won't go wrong following that preference.

what size hose/clamps would be needed?

I see that the hoses and clamps come in a variety of sizes, varying by the 1/16th of an inch.

What size hose/clamp should I put on the 1972 FJ40, and is there a particular brand that is preferred over another?

Should I replace these connections/hoses as well?

Should I replace those as well? Would all three connections use the same tubing and clamps?

Maybe someone can post a photo or two of what this is supposed to look like when its' done properly. That would be a tremendous help as I'm quite the novice at this type of thing. 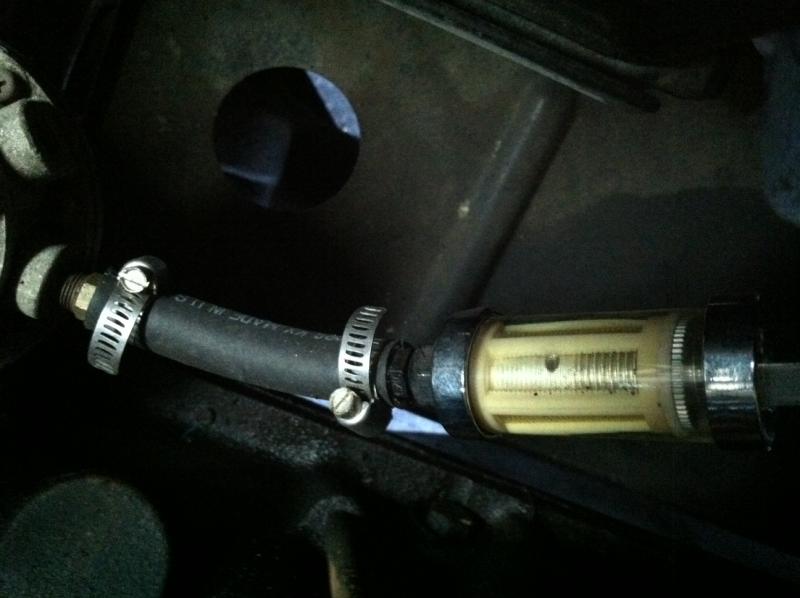 The soft hose at the carb is not a real problem. I used 5/16" hose that is intended for the fuel injection systems. NAPA sells this hose by the foot and can match up some hose clamps to go with it.

The fact that the rubber line is installed so close to a bend in the hard line makes it even harder to seal up. I prefer to cut the hard line in an area that is straighter and bend it as necessary in the direction of the carb hook up. This will take some of the pressure off the connection.
You must log in or register to reply here.

Which carburetors *actually work* for an FJ40??
2