What are the benefits of a 2fe? Its fuel injected which is one benefit. What else?

The 2F has a longer stroke than a 3F, so you get a "stroker" 3FE that has more torque.

I wonder what the actual hp and tq numbers are of a 2fe?

Here's what I wrote a few years ago in the 80 section when these things were at the front of my mind. Not sure if the links are still current. When I finished and installed mine, I estimated ~30% bump in power over the 3FE it replaced.


A number of “2FE” engines have been built and installed into 40s, 60s, 62s and possibly iron pigs as well. The obvious member of the family that is missing (as far as I know) is the 80. As someone with a 2FE in the final assembly stage, I thought I would start a thread in this section to get some discussion going on that possibility. It seems there is interest, so to get the ball rolling here’s some of the info that’s already out there.

What is a 2FE?
It is basically a 3FE built with the block and rotating assembly of a 2F, and whichever set of accessories work for the application (2F in a 40 or 60, 3FE in a 62 and presumably in an 80 as well).
Here’s what I wrote in my thread when lt1fire popped his head in and asked:

The strong points of a 2F are in the bottom end. Longer stroke, longer rods, taller, more stable pistons, IIRC a stronger crank. The bottom end of a 3FE is somewhat weaker. To shorten the deck the geometries were changed. On top of the shorter stroke it also has a much short rod and a shorter piston. The shorter rod means greater a greater maximum angle with respect to the centerline of the bore, and the shorter piston is less stable. Additionally, on a 3FE at bottom dead center the entire piston skirt has dropped out of the bore. With the 2F a portion of the skirt also drops below the bore, but it is slightly less in absolute amount, and significantly less in terms of proportional length than with the 3FE, since the 2F piston is much taller.

The strength of the 3FE is in the top end. The head has a tighter combustion chamber, the exhaust ports are bigger, the intake manifold and exhaust manifolds are both a more smooth flowing design than on the 2F, and of course you have a multiport fuel injection system, with all the engine management and fuel mixture benefits that come with it.

Compared to a 2F, you get better fuel management, and I would think an engine more suited to higher revs with the improved intake and exhaust. Compared to a 3FE, you get more low end grunt because of the extra stroke length (my 3FE doesn't really come alive till ~2500, but is strong in the 3000-4000 range) and you get a bottom end that while heavier, is supposedly stronger and better able to handle revs in the 4000-5000 range.

The 60 series trucks are well suited to fit a 2FE, since the 60 came with a 2F and was designed to accommodate the “extra” 2" of engine height. In a 60 or 62 with a 2FE, apparently the top of the intake manifold just rubs on the hood liner. With the 80 series trucks, I understand that under-hood clearance is an obstacle for fitting a 2FE, you would either need a body lift, or a modified hood to get the clearance.

There is documentation of several 2FE builds, from basically stock assembly, to absolutely no holds barred. The following are some of the links.

Results? Well Pappy and Matt both have dynoed their trucks.

The one that we get to play with is a '78 called Rootbeer. The 2FE that is in it was a full build, mild cam, minor port intake/exhaust cleanup/matching, balance job, etc. It's not a V8 (IMHO a good thing, I prefer the Toyota I6 in a '40) but has nice power. More than the HP is the driveability, it's smooth and pulls strong, is well matched to the rig. Leave it set for a few days, reach in turn the key, fires right up, jump in and drive away, no muss no fuss, civilized. It easily cruises at 75mph, has plenty of power to go faster, but that is where the H41 runs out of gear for cruising. On the trail, it has buckets of torque, is very well behaved, overall is a real pleasure to drive.

The before we messed with it pic. 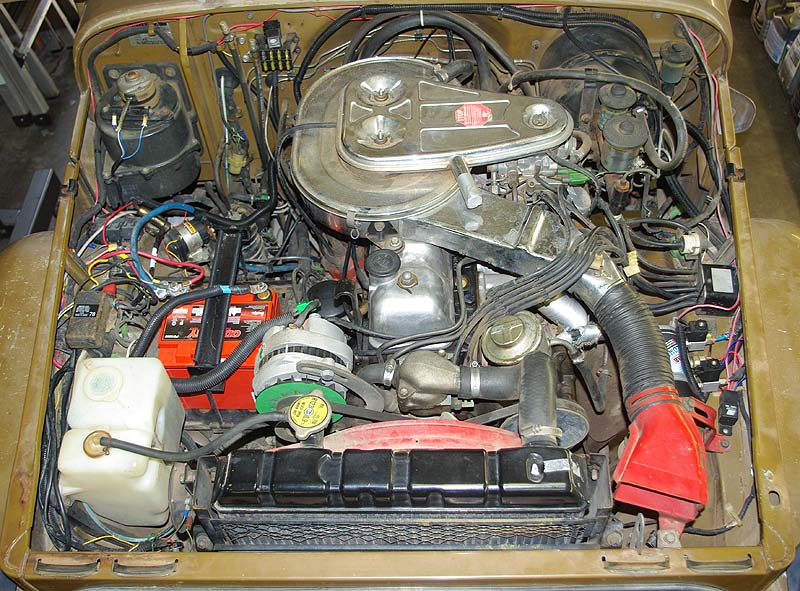 Most of the way done. 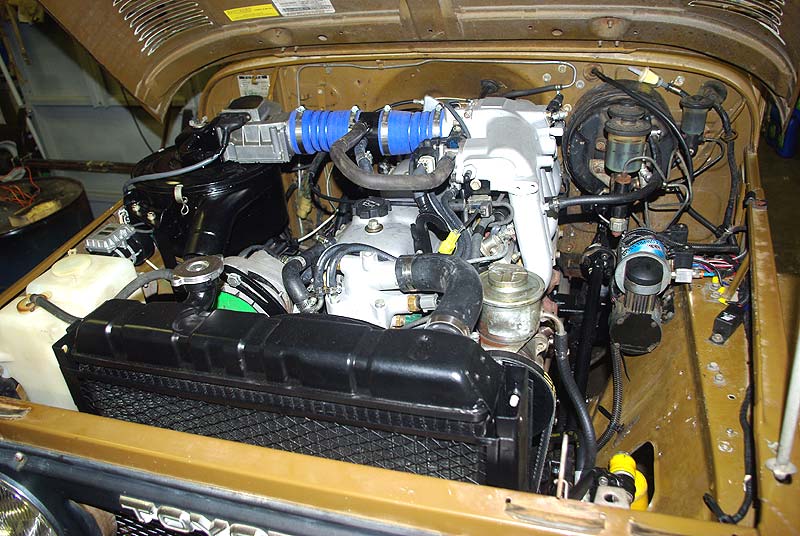 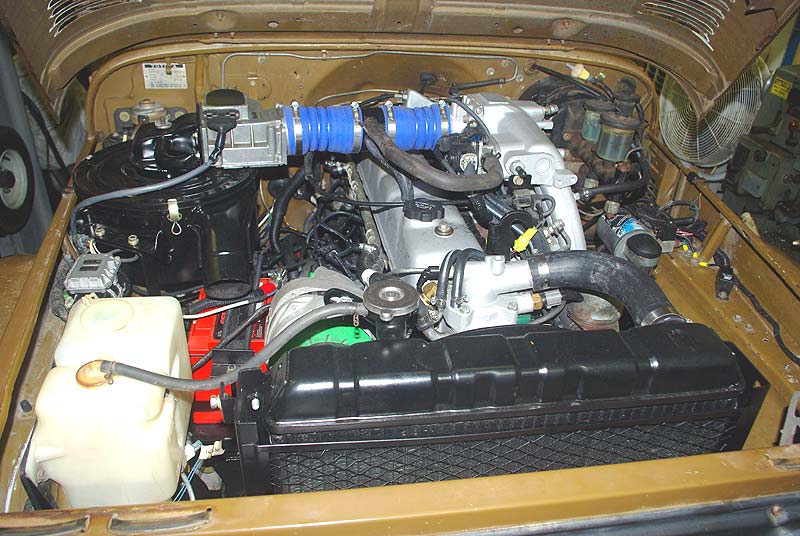 A H55 would likely be a good match, but Jim has other rigs for the long distance stuff, this one is more of a trail rig toy. 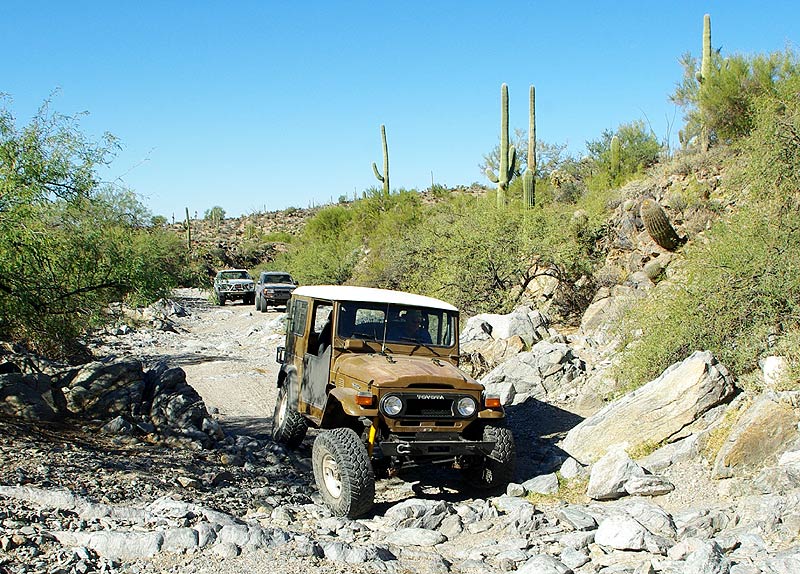 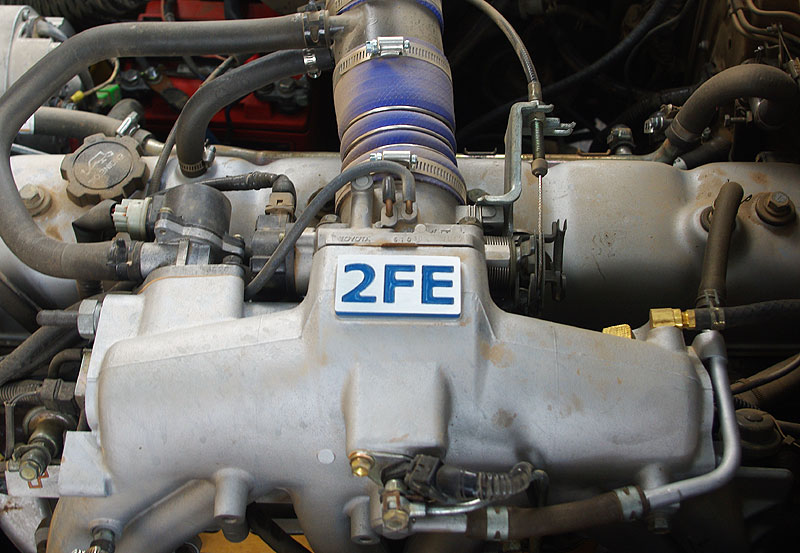 Ok, so I have a tbi 2f. It looks like the only thing thats different from my motor is that a 2fe has 1. higher compression(which I could achieve if I shave the head right?) 2. MPFI (So I lose some power due to unequal length runners, but I can custom program my tbi easily)3. The head is a little more free flowing(Which maybe I could come close to duplicating with a port a polish of my 2f head right?)
Did I cover all the bases? If I shave my current head, and do a p and polish(especially on the exhaust ports), I wonder how close I would come to a 2fe power wise? I am unsure if I want to kick up the compression because with the factory compression ratio I am able to have a pretty aggresive amount of timing on regular octane. I will likely lose this if I shave the head. Higher compression 8.5 or 9.0:1 would only give what? 15hp over factory compression ratio?

That 2f emblem is a nice touch

White Stripe said:
I wonder what the actual hp and tq numbers are of a 2fe?
Click to expand...


This is my engine and I can't speak for others. This is also an apples to oranges comparison since the 2F and 3FE numbers are from Toyota and I'm guessing it's power at the crank. Mine is power at the rear wheels. 233lb-ft rear wheel torque translates to 284lb-ft at the crank assuming an 18% loss through the drive train. In addition the torque curve was Kansas flat. 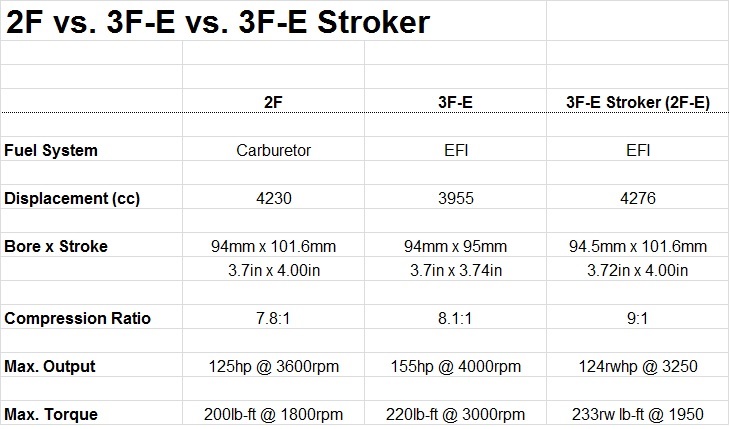 White Stripe said:
What are the benefits of a 2fe?
Click to expand...


In addition to what others have said, the engine just looks sexy under the hood. 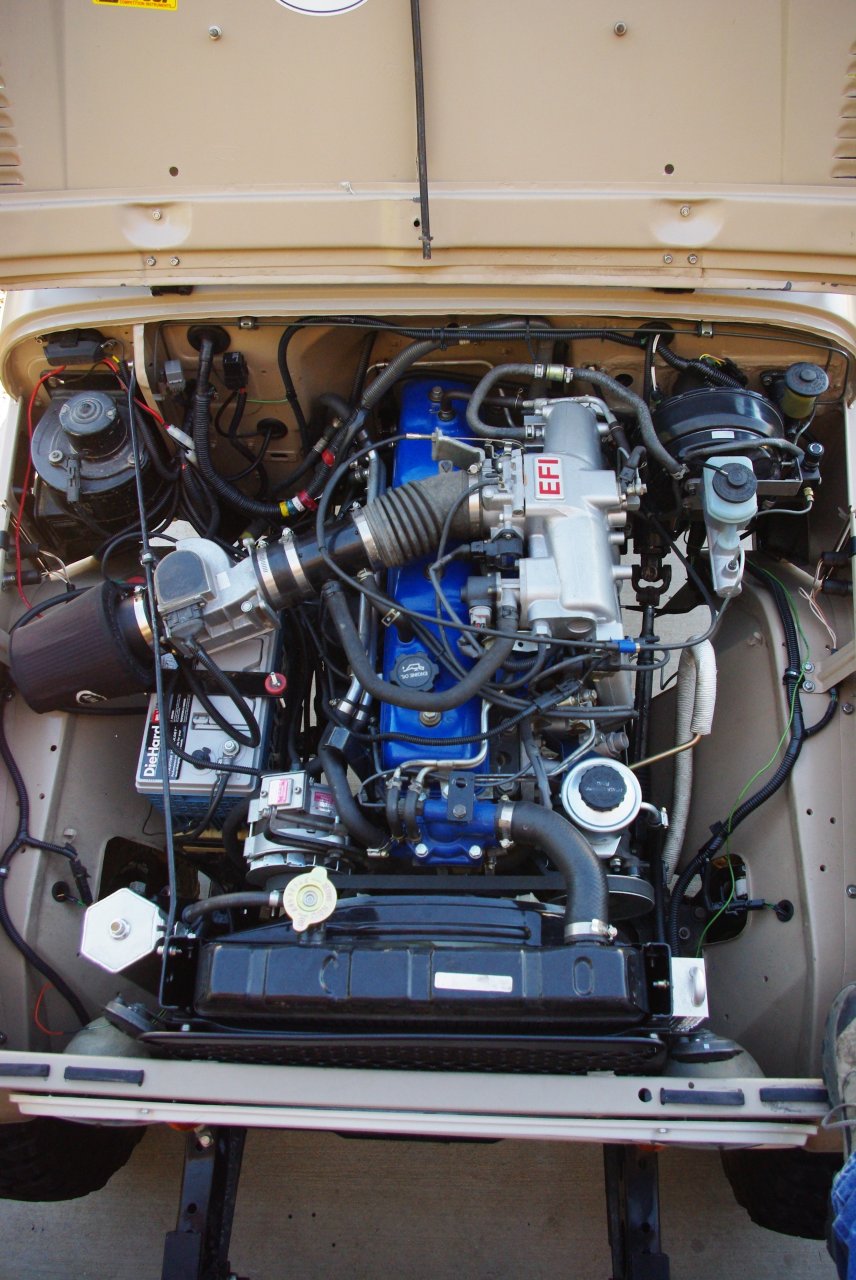 Tools R Us said:
A H55 would likely be a good match, but Jim has other rigs for the long distance stuff, this one is more of a trail rig toy.
Click to expand...


I run an H55F, and love it. RPMs on the highway are higher than the engine needs, and I can do 70-75 all day long. And if it wasn't so squirrely without a sway bar it would drive comfortably faster than that (I've had it over 80 and it was still pulling). On a trip a few years ago I pulled most of the grade from Phoenix to Flagstaff fully loaded with camping gear in 5th gear.
Last edited: Jul 13, 2014
You must log in or register to reply here.