I would like to know also. It seems pretty likely that the EGR might be the cause of HG failures.

However, didn't the HG issue deal mainly with an experimental HG material? I didn't think that many people had problems with HG's with the new HG material.

To answer your question no my FZ-FE doesnt have an EGR. Its a 93 model, and has done 300,000km's, im the third owner and as far as im aware there has never been any HG issues either. Ill put a photo up later.

im interested in this info also. was wondering if a faulty EGR could be detrimental to the head as one of the EGR's job is to lower combustion temps. with the #6 cyl being so close to the egr tube...i could see failure happening. kinda worried now as ive been running the cel for insufficient flow about 6 months...just never bothered to deal with it since ive got a work around for emissions testing and it seems to run normal. might have to buck up and get it sorted out i suppose...
sonny
old ride: 1998 4Runner

From South Africa and most L.C are diesel here. My 1998 4.5 has a carb. The Gx 100 ser here is EFI and has no cat converter in exhaust or any of those things on the intake manifold.

Also we do here of head gaskets from time to time but not common, but that could be because of the more popular diese

No egr on aus versions,

we are seeing some failures last few months between 300-400 thousand km [not miles] and the one we did last week was leaking engine oil into the water, but nothing else, the one here this week is leaking coolant from the back of the head down over the bell housing, and the one before xmas was leaking water into No 1.

Small bore lips, but still factory cross hatching on the last 2, one has been on lpg all its life, and had 383,000km on it, all the guides were good, all the valves were great, excpt 4 exhaust valves, which needed to be resurfaced, is all, and we set all the valve clearances again, proper gasket, new head bolts.

No 3, leaking from the back of the head we will get apart in about 3 weeks, as we aree booked out until about mid Feb at the moment.
DAZ.
95 FZJ80 auto 3" CDC slinky long travel lift, 35" Nittos, SLEE'D Warn Tourer "SNOWY" USA.
16 Hilux 2.8TD Stage 5 Icon Suspension CDC nitrogears 35s etc
https://forum.ih8mud.com/threads/superslinky-80-build-thread.1106618/
SNOWY build thread - WORWGN build thread - 4XOVERLAND Facebook

Have there ever been any second HG failures noted?
Dave


"I would remind you that extremism in the defense of liberty is no vice. Let me remind you also that moderation in the pursuit of justice is no virtue."
Barry Goldwater

None that I am aware of, here, though we researched what we thought was required to cure the problem long term.

We had to do a similar thing with our falcon 6 engine, which is reknowned for a head gasket every 100,000km, and we have some with 250,000km + now thta we have done, after researching what we thought they needed, so im not expecting to see to many 2nd timers hopefully.

All the ones we see are factory coolant normally as well, the last vehicle was an unknown and had green coolant from when the customer bought it at around 340k km, we flushed it and chnaged it back to red factory coolant, the one before that had also had green coolant added, but the one here this morning has been factory coolant all its life, and has the lowest km on it at 250k km odd.
DAZ.
95 FZJ80 auto 3" CDC slinky long travel lift, 35" Nittos, SLEE'D Warn Tourer "SNOWY" USA.
16 Hilux 2.8TD Stage 5 Icon Suspension CDC nitrogears 35s etc
https://forum.ih8mud.com/threads/superslinky-80-build-thread.1106618/
SNOWY build thread - WORWGN build thread - 4XOVERLAND Facebook

The batch of gaskets that Robbie dropped off contained one new version gasket. That particular engine had an etched block and it was not addressed before the gasket was replaced. The replacement gasket had NOT failed and the fire rings on #1 and #6 were intact.

Robbie DID NOT do the first replacement, he fixed it properly on the second pass.

Yeah, no EGR on our 80's down here...the early ones anyway. Mine is a December 92 model and didn't even have a catalytic converter. That saved a lot of drama when it came time to bolt on a new exhaust. Had mine for 4 years now and it has 277000 trouble-free kilometres on the clock. Very happy with the thirsty old girl!

Here's a pic of the area where the EGR components appear to be installed on the US 80's.... 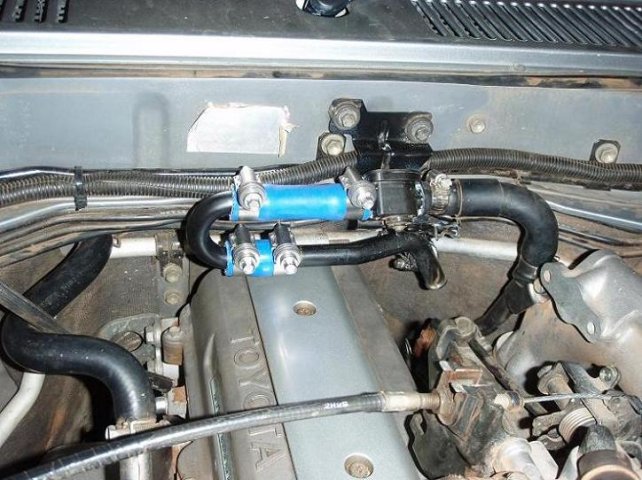 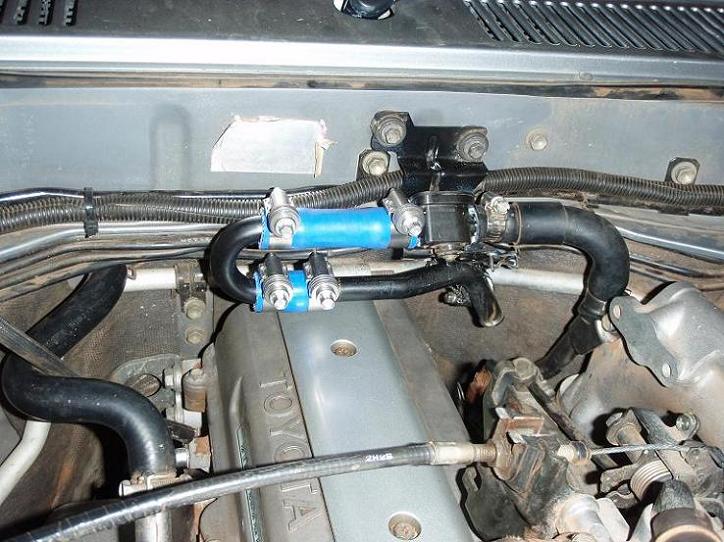 I haven't read every single HG thread on here, but has anyone else pointed out that the 1FZ was not the only Toyota engine of that period to have headgasket problems? The Toyota 3.0 V-6 found in the pick ups and 4Runners from 1988-1995 had so many headgasket issues that Toyota was actually forced to do a headgasket recall campaign that lasted well over 10 years. Toyota no doubt replaced or repaired thousands and thousands of engines. I know many, many people who ended up with brand new short blocks when the head gasket failure caused actual damage to the engine.

Toyota first started having failures when the 3.0 was first introduced in 1988, but Toyota didn't start the recall campaign until around 1996. At first, they recalled all 3.0 V-6 engines that were less than 8 years old and had less than 100,000 miles, but by late 1997, changed the focus to only 1990-early 1995 model years, while removing any mileage limit. I think claiming that 1988 and 1989 engines were both more than 10 years old at the time and also believed that most failures were occuring in 1990 and later engines.

This recall for 1990-1994 engines, lasted from 1996 through at least 2004 and it did not matter how many miles the engine had on it or if you were the original owner. Many, many very high mileage trucks got brand new short blocks or at least new headgaskets. By 2004, a 1990 truck would have bee 14 years old, but they were still covered under the recall. But a 1995 truck would have been 10 years old. 10 years seems to be the cut off for Toyota as far a recall like this.

So, the 1FZ was not the only engine to have headgasket problems during this period. Too bad Toyota covered one engine and not the other. My guess is that the 3.0 V-6 had far more failures in real numbers due a lot more engines being sold and possibly more defective, problamatic design which lead to a higher percentage of trucks being affected. With the 1FZ, the headgasket failure seems to be the exception, while with the 3.0, it was rare to find a truck that didn't have HG failure or replacement sometime during its life. Unfortunately, since so many headgaskets were replaced early on, it's hard to tell what percentage would have actually failed. In our case, almost none were covered by warrenty, except those that were replaced during the intitial warrenty period, so we have a better idea of how wide spread the problem is and it does seem to only affect a smaller percentage of engines. Definately not insignificant, but way less than a majority.

As to the cause, the same debate rages among those 3.0 V-6 owners as do us with us. Some attribute it to the same poor headgasket design, or lack of asbestos or proper materials as some of us do ours. Others say that the 3.0 lacked the proper number of head bolts or in the proper locations or that the torque spec was not tight enough.

As far as headgasket materials, the fact that the problems occured during almost the exact same years for a number of different engines seems to lead credience to that theory. It would be interesting to know if Toyota sourced all its headgaskets from the same supplier or different suppliers and if it was different suppliers for the same engine or the same engine groups and if one supplier made a better gasket than other suppliers. But probably information that is impossible to ever track down.

Regarding the head bolts, I once owned a 1991 Toyota Supra Turbo 3.0 I-6 and I can recall back in the day when owners were complaining of headgasket failure in even that model and attributing that to the head bolts not being tightened properly at the factory.

One interesting thing is that Toyota had ended the recall for 3.0 V-6 for build date October 1994. Yet some 1995 trucks with the 3.0 V-6 were built long after that, as the old style truck and engine continued through mid year 1995 and the 3.0 V-6 Runner lasted the full 1995 model year. But headgasket failures did not just stop after that model year. I've recieved numerous emails from late model 3.0 V-6 owners who had failures right up to the end of production.

And one more interesting thing. Headgasket failure seemed to even occure on a regular basis on the new generation 3.4 V-6 for the first several years of production, late 1995 into 1996. All of which corrospond to the production years of our 1FZ.

The conclusion I've come too is that all of these head gasket failures is probably due to head gasket materials, since it's happened in a wide variety of engines and seems to have been solved on almost all Toyota engines by model year 1997, ironicly the end of U.S. production for the 1FZ.

But not that the materials are entirely inadequate, since many models have no problems and many 1FZs last their entire lives with no headgasket issues and so did some 3.0 V-6s. Which leads me to believe that it's possible to avoid failure by not pushing the engine too hard. Keep it as cool as possible, for example, with a properly maintained cooling system. A overheated engine, seems to exasserbate head gasket failure in almost any Toyota, including engines that dont' normally have problems. This is probably due to the problems caused by the aluminum head on an iron block configuration that most Toyotas have.

As to why Toyota chose to recall some engines and models and not others. Besides the fact that the 3.0 was probably produced in far higher numbers and was driven more often leading to more complaints than the very low sales volume 1FZ, the 3.0 headgasket failure seems to have caused an internal coolent leak over a long period of time, which often lead to damage to the number 1 and number 6 cylinders. Having these engine fail completely might have caused a real reputation problem for Toyota. However, not only was the 1FZ failure relatively rare at that particular time, the damage seems to be limited to an external leak and by the time it was leaking into the cylinders the problem was obvious enough for most owners to get it addressed. I've yet to hear of a 1FZ that had cylinder scourching and damage from headgasket failure, although that was a very regular occurance with the 3.0 V-6.