Am I The A*hole? I'm admittedly new to the FJ40 scene but have been wrenching on vintage cars and motorcycles for the last 20+ years and in doing so have significant experience with aftermarket suppliers - both good and bad. Question is, am I expecting too much here?

Started 6 weeks ago when I picked up a 1970 FJ40 and immediately planned on doing a 4 wheel disc conversion. Not knowing much about the FJ40 and wanting to get back on the road as quickly as possible, I decided to pony up the cash and buy a comprehensive kit. I decided on Wilwood as I have used the calipers on a variety of builds over the years and have always been happy with the performance and ease of rebuilding. I know it's not the most popular choice here, but just giving my reasoning. So, I decided to give Rick at Man A Fre a call to discuss options and figure out the best plan of attack. I clearly told him that I wanted a 4 wheel Wilwood brake kit and something I can just bolt in without too much hassle sourcing other parts. He agreed that it's a good bit of kit and we then went over booster and master cylinder options - the only deviation from Wilwood in the entire phone call as I decided to go with a GM cast iron master rather than the more expensive Wilwood master (I was already at $2,339.34 for the kit). Admittedly, he did indicate the rear kit was backordered and would drop ship from his supplier and would come with bare rotors rather than the slotted he normally offers. That didn't matter much to me so I pulled the trigger and waited.

fast forward a week or so and I get the front kit, master cylinder/booster, and pedal assembly - all looks great and aside from the wrong instruction manual being included, everything is there and ready to get bolted on. Kit goes on without a hitch and now I'm just eagerly awaiting the rears... 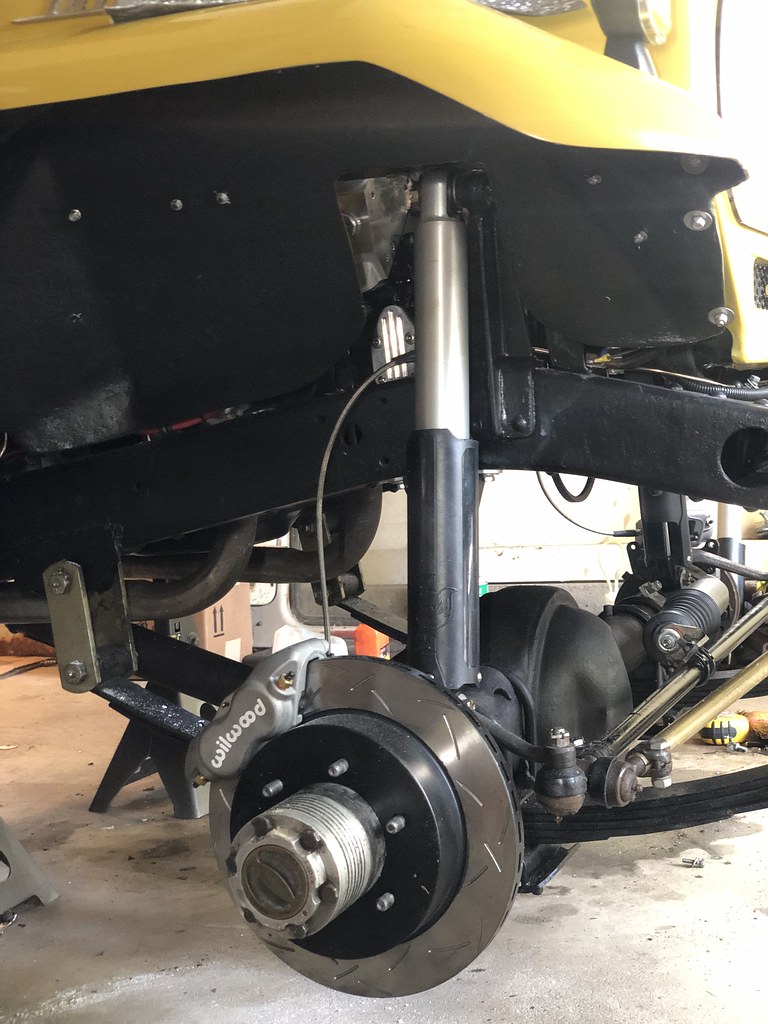 Another week or so goes by (6/30) and I get a big heavy box. Excitedly I tear into the box only to find a set of GM calipers. While GM calipers performed well on the Monte Carlo and would be more than fine on the FJ40, it wasn't what I asked for or thought I ordered. I call Rick and send him pics and he says its the correct kit as they usually sell the Wilwoods fronts with the GM rears and this is what I paid for. Double checking the invoice (mind you, i ordered everything on the phone and paid for it on the call and he sent me a follow up receipt which i admittedly did not scrutinize or cross check part numbers) he was correct that it was the GM kit. After about 30 min of back and forth trying to gaslight me into thinking I'm insane and in fact ordered a Wilwood/GM kit, he finally offered to exchange the GM kit for the Wilwoods I had in fact ordered but at the additional cost of $285. Cue more back and forth for another 20 min or so and we finally agreed upon an additional payment of $124 (his cost) and he'd ship out the Wilwood kit upon receipt of the tracking number on the return shipment. I ship the box back the next morning (7/1) and email Rick the tracking. He says the kit has been ordered and will ship out shortly and he'll email me the tracking. Weeks go by with no contact and no rear brakes. A week and a half ago, I send an email asking for tracking and get no response. I call and talk to someone who says the kit was shipped out the day before and I should receive it shortly. More days go by... I email Rick and he says that kit went to a different customer and his supplier had problems with their lathe so mine got delayed but would ship soon. Finally on 7/23 I receive the tracking info and the kit was delivered on 7/25. I immediately open the box to find that the kit includes completely different model and finish of Wilwood calipers - physically larger and finished in gloss black.


I'm a bit annoyed as I notice this sort of stuff but at this point, i just want the truck back on the road and was willing to just snag a can of caliper paint and shoot the fronts black. 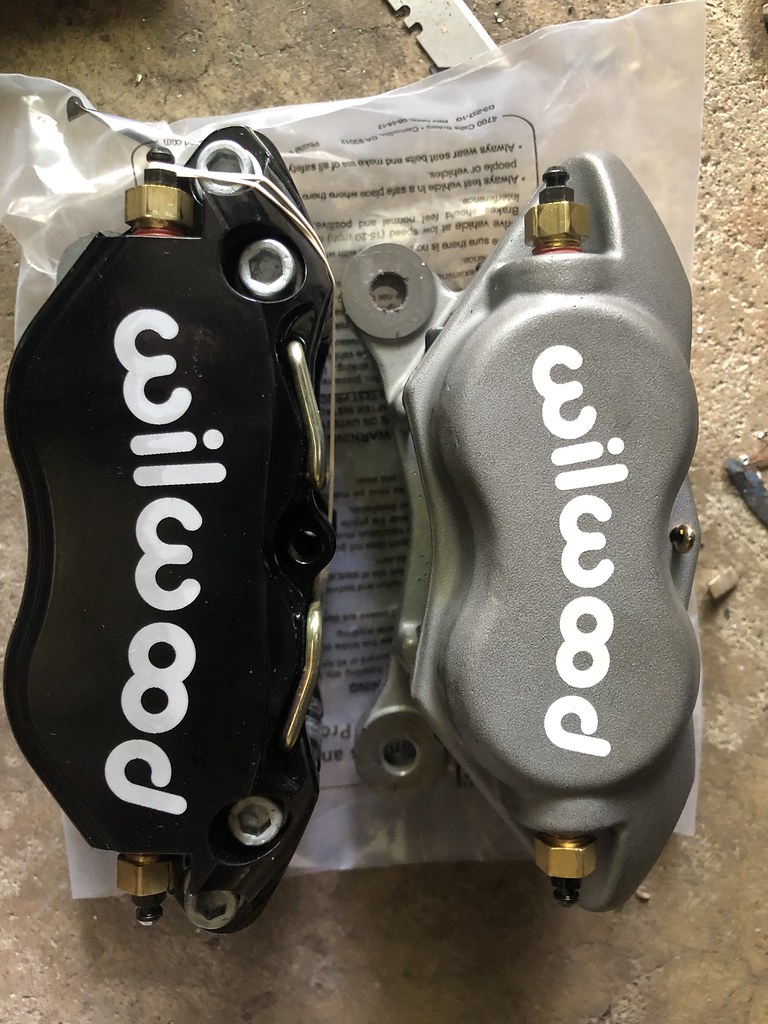 But then I dig deeper into the box and take out the rotors. That's when I just about lost my sh*t. One of the rotors hadn't been resurfaced after painting. 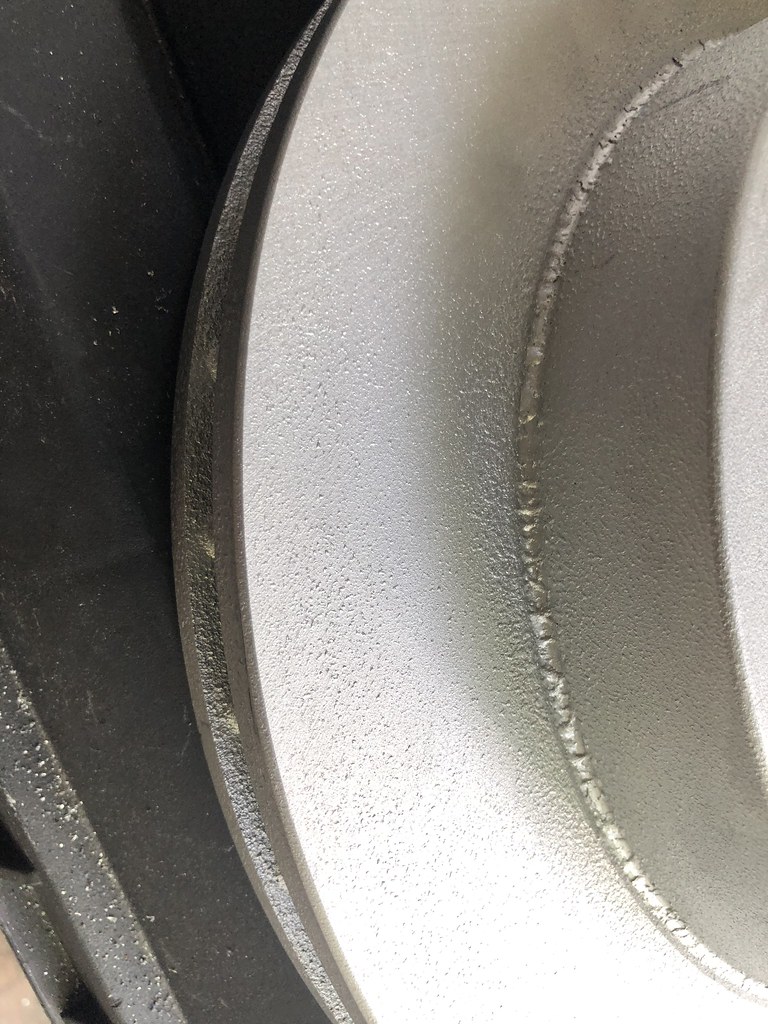 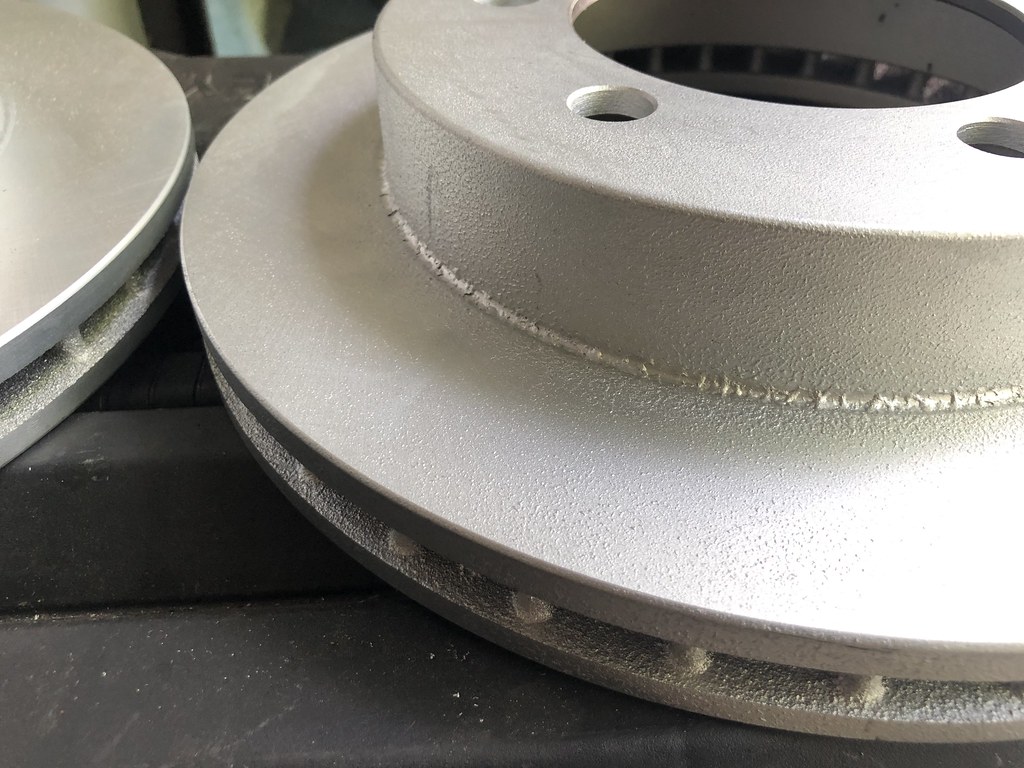 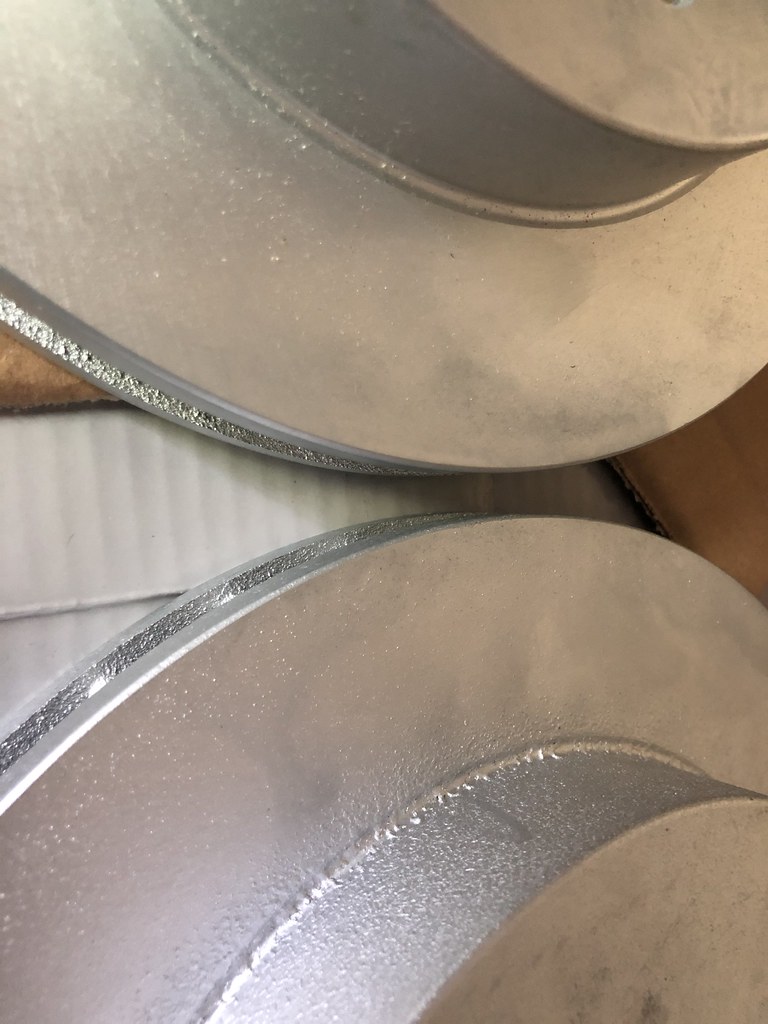 So not only am I now 6 weeks & just shy of $2500 into a disc brake upgrade, I now have to resurface a rotor to boot because of crappy quality control. I email Rick thinking I might get some sort of customer service and instead get this response this morning: 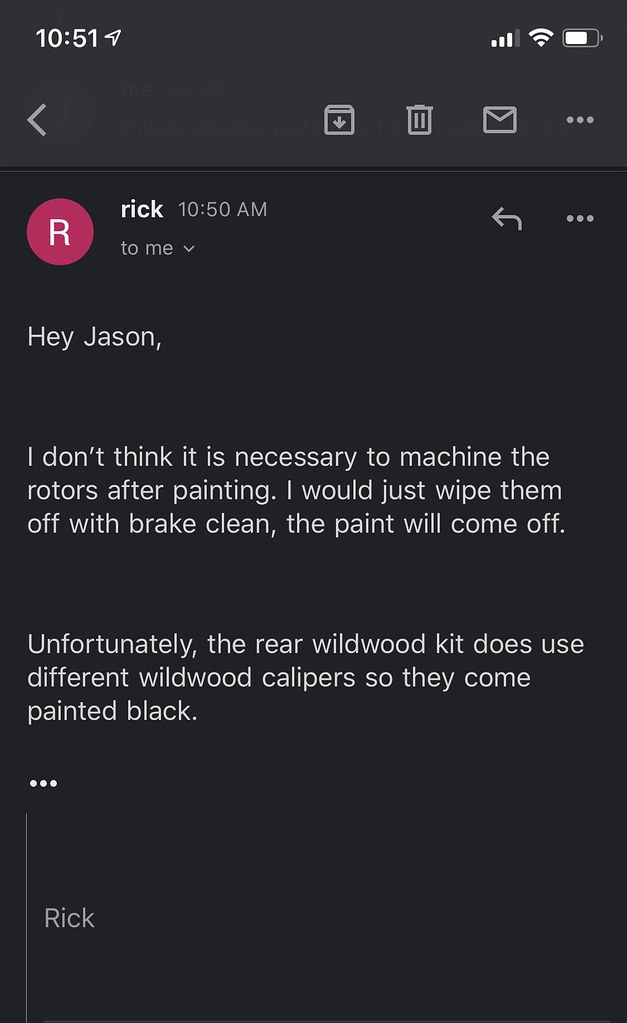 *Narrator's Voice* brake cleaner doesn't even make a dent in this paint. I have two options - bring in and have a shop resurface it out of my pocket or take more time to resurface it myself. I thankfully have a rotor surfacing tool for my track bike, but it will take forever to get through this paint and do it right. I'm fine with DIY but am pretty pissed that i now have to correct crappy quality control and lack of communication. Also, it should be noted that at no point did Rick indicate the calipers would be mismatched and, in fact, during the phone call about the GM calipers, he indicated that the reason they don't sell too many 4 wheel Wilwood kits is that the calipers are identical front and rear and thus require a proportioning valve, to which I replied that I already installed a Wilwood proportioning valve in anticipation of this, it was fine by me, and re-confirmed that I wanted the rear Wilwoods to match the front as I previously indicated on the initial ordering phone call.

Well you have a right to be frustrated, but it does sound like about half the s#!t I do! Just keep (re)fixing and bolting stuff on! I have a whole pile of "wrong stuff" shipped in my shop that I never got round to returning (usually because I waited to long) probably 1/2 my fault, 1/2 seller/manufacturer err or mis-advertised. I could probably start building a whole other "wrong parts" vehicle (part FJ4x, part chevy, part jeep, and part BMW.

Those rotors look ruff to me, and should be cleaned up. Calipier colors, idk, paint them or not. If you ship them back youll be adding time to your build. It seems you paid a premium in time and money for this situation. Id say Wilwood and in some part Manafre, both screwed up, but your approach to 4 wheel discs on a 40 is wrong headed, too. Imo, you should have put oem discs on the frt along with fine spline birfs. To me, aftermarket bolt on frt discs are a shortcut from doing the job correctly. Monte Carlo disc on the rear have been around for decades and work fine.

For an extra grand I’d want more. Mine included custom designed and fabricated calliper mounts built by a local hot rod shop for $800 for a FF Fj45 rear axle. Where now brackets are available for <$100 for the rear.

You paid a premium for plug and play... and didn’t get that.
Builds - My 40 Build... 20 years and Counting... Purists beware, this may hurt
Installing an 81 hardtop onto my 74 (keeping the hatch)
Gas charged Hood & Hatch strut retrofit
Never underestimate the importance of a ground
FF rear axle, 4 discs, AIRide rear bags, ‘72 SBC, On-board air, Split hood, Gas hood/hatch struts... Restomod.

bikersmurf said:
You paid a premium for plug and play... and didn’t get that.
Click to expand...

Location
on the outside looking in

Man A fre and BTB are the same. I had issues with BTB in the past, before they moved, and have moved on. Good luck.
"nothing so needs reforming as other peoples habits." Mark Twain

Try to get a refound and get the right stuff
Click to expand...


unfortunately it is what it is for the front disc conversion & associated components. It's mostly installed really not worth the time and hassle to remove it all and source replacement parts when this truck won't be seeing hardcore off roading. Mostly will be street, fire roads, & beach with the occasional light off road trip to Rausch Creek or state park trails. I'm mostly concerned with stopping power with 33's and pulling a motorcycle trailer. For the rear, after a lot of back and forth, I will be returning the kit to MAF/BTB and ordered the brackets, milled rotors, and lines for the GM rear conversion from another vendor and (for both performance and expediency sake) using Wilwood GM III aluminum calipers off my mustang project that isn't going anywhere anytime soon. Was significantly cheaper than the MAF/BTB kit and will accomplish the same goal. Hopefully the truck will be back on the road by mid week next week.

MFE/BTB haven't had a very good rep for a few years now. IMO they are not part of the LC community, just making money from it.

I always suggest searching here on Mud and patronizing the vendors that support the site. The best of the best are here.
1973 FJ40, beeropener
1966 FJ45
KR6AWL
"A government big enough to give you everything you want, is big enough to take away everything you have." - Thomas Jefferson

No, jhodro, you're not being the A here. You're new and understandably pissed off. Every single one of us here who didn't buy a turn-key rig, has been pissed off in pretty much the same way by one of the big suppliers, the suppliers that go by initials. SOR, MAF, etc.
Back in the day, when I first got my 55, before computers, they were the only game in town.
These days, what with 'Mud, I usually buy from guys with a first name. Georg, Mark, Jim, Kurt...or the classifieds from anyone with a decent post count.
Occasionally, one of the big initial companies is the only place in the world to get something that I need, but I exhaust all other possibilities before I call them.
I understand your desire to use the Wilwood stuff, we all like what we know. But, the archives here can often show us a cheaper, easier, better way to do something.
A LandCruiser will teach you patience. Finding the correct parts takes time, You're not going to find pages of glossy photos of LandCruiser parts in the 4x4 magazines. You'll need to hunt, search, mull over your next upgrade.
Post your mullings here, we'll point you in several of the right directions.
SloeMoe...What, me hurry?
"Well it's a '68, '69, '70, '71, '72, '73, '74, '75, 76, '77 FJ55"
FJ55 Registry
You must log in or register to reply here.