I have a fzj80 1fzFe that will idle just fine but blows the efi fuse whenever under load, it will drive a couple blocks and then blow, or if I leave it in park and rev it to 2k rpm it will blow after about 45 seconds, but it will idle forever under no load though and not blow. any suggestions?

Check the wiring harnesses that go to the O2 sensors and look for a bare wire shorting to the frame.

Check the wire harness where it passes the EGR pipe to be sure it's not rubbing, shorting on the hot pipe.
A

Checked both but I'm no expert, anyone got a pic of where I should be looking? Any other suggestions?
A

Ok hand traced the O2 sensor wires and no sign of burning, also disconnected the sensors to be sure, there are some burnt connections in the passenger side near the firewall but they go up toward the antenna and it was bent and wouldn't move when I bought it so I figured antenna motor wires, also one of the small wires coming off the positive batt terminal is exposed but couldn't possibly ground on anything. As I said it will idle forever but when it need to draw more fuel either from driving or me revving it it only lasts 45 seconds and then dies, when it goes to die if I floor the gas it comes back strong for a second but then dies completely. I already replaced the fuel pump and filter because I thought the fuel pump was drawing too much power trying to push fuel. I checked the efi relay its fine. Something is drawing too much power when I give it gas, I assume a simple ground fault would kill it even at idle. Help please!

Check the harness on the frame rail on the passenger side by the front driveshaft. On mine, the O2 wiring harness was rubbing up against the front driveshaft and that wore a hole into it and two of the wires, which caused it to short out on the driveshaft. After you figure out where the short is, if that is indeed the problem, it isn't hard to fix. A few butt splices, some electrical tape, and some zip ties to get it secure the frame and you should be good to go!

I checked for rubbing, the harness is up away from the drive shaft, and it can't be the O2 sensor because I disconnected them, cut the wires and separated them even. I forgot to mention that the idle was all over the place, usually on the low side, but didn't kill until put under load for a while.
A

Which components might draw too much load when revved but not at idle? Thoughts?

trace the wire with a multimeter and check for shorts. look in EWD
E

The small wires coming off the positive terminal are the fusible links. If you can see copper wire through the insulation, then they need to be replaced. When it comes to short problems, you must fix every little problem you come across to eliminate that as a source. Get 3 sets. One new one for the car. 2 extra for the glove box.

The computer switches the fuel pump speed from Low to High when you hammer on the gas pedal to the floor. Wide Open Throttle (WOT). If you have a wiring problem with the fuel pump circuit, I would think it would blow when the relay moves between High and Low. Will it run for a short time under WOT?

The wire harness at the EGR pipe must be unwrapped to get a look at the bundle of wires. You will most likely need brand new wire heat wrap to replace the old stuff because it generally disintegrates when it is unwrapped. You are looking for the insulation to be melted where it was resting on the hot pipe. Don't have a picture, but there are some here on the web site. It should be pretty obvious to see the smeared appearance of the wire insulation and the wires will be stuck together.

If you think the wires from/to the antenna are toast and not doing anything, I would cut them and tape the ends so that you KNOW that the wires are not shorting to the car body where you can't see.

Finally, for grins I would put the key in the "Run" position and press on the gas pedal for a few minutes to see if the fuse blows. If it doesn't blow, then it would possibly point to the idea that the engine needs to be running for the short to happen, and maybe telling you that the engine movement from side to side is causing the critical short. And that often means the wire harness at the EGR is the problem.

Fix the fusible link(s) coming off the battery first and go from there.
A

FoUnd the culprit, the + lead going from the top of the pump carriage/sender unit/ whatever to the pump itself had apparently worn through jostling against the vent tube. Put some gas resistant aircraft grade sticky stuff on it and double shrink wrapped it, problem solved! I don't get on here much so pass the word along gents! Wish I had pictures. Does anyone know what that fuel pump carriage thing is called? Where can I get new fusible links for the batt?
E

Great work! Glad you found it. I got my fusable links from the dealer. There are a couple of guys people use. I use CDan for parts out of NM. Another guy is Beno and he is closer to the east coast. There are a few others that give a MUD discount, so look around for who is closest to keep shipping costs down.

Either of the two guys I mentioned can answer ANY parts questions you may have. Not trying to play favorites, I just know those two from personal experience.

Goo job with the fix!
Ih8electricalgremlins

Seems that issue came up long time ago with Beowulf or mad baggins maybe. Had him stumped for a while with a random cutoff. 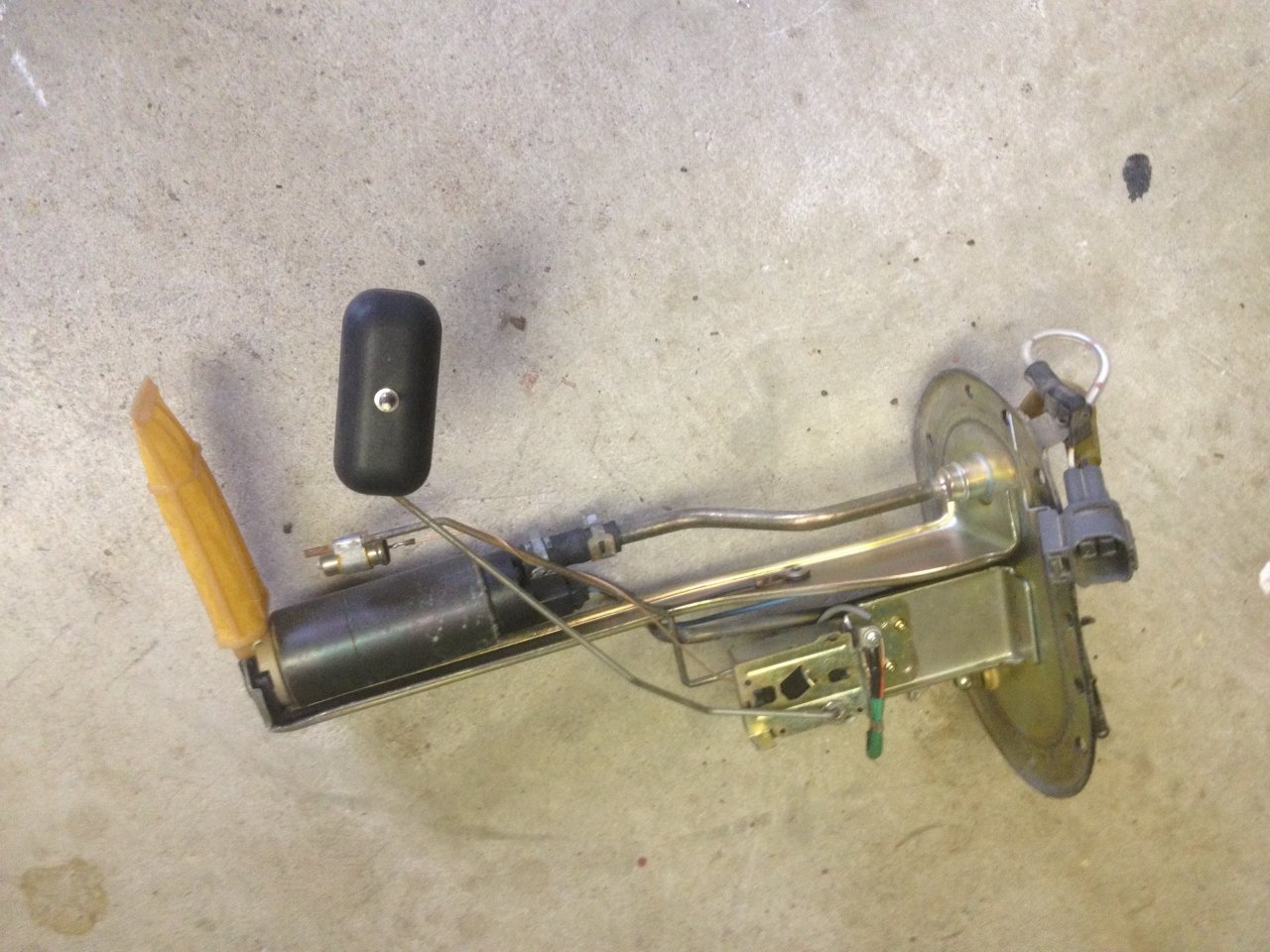 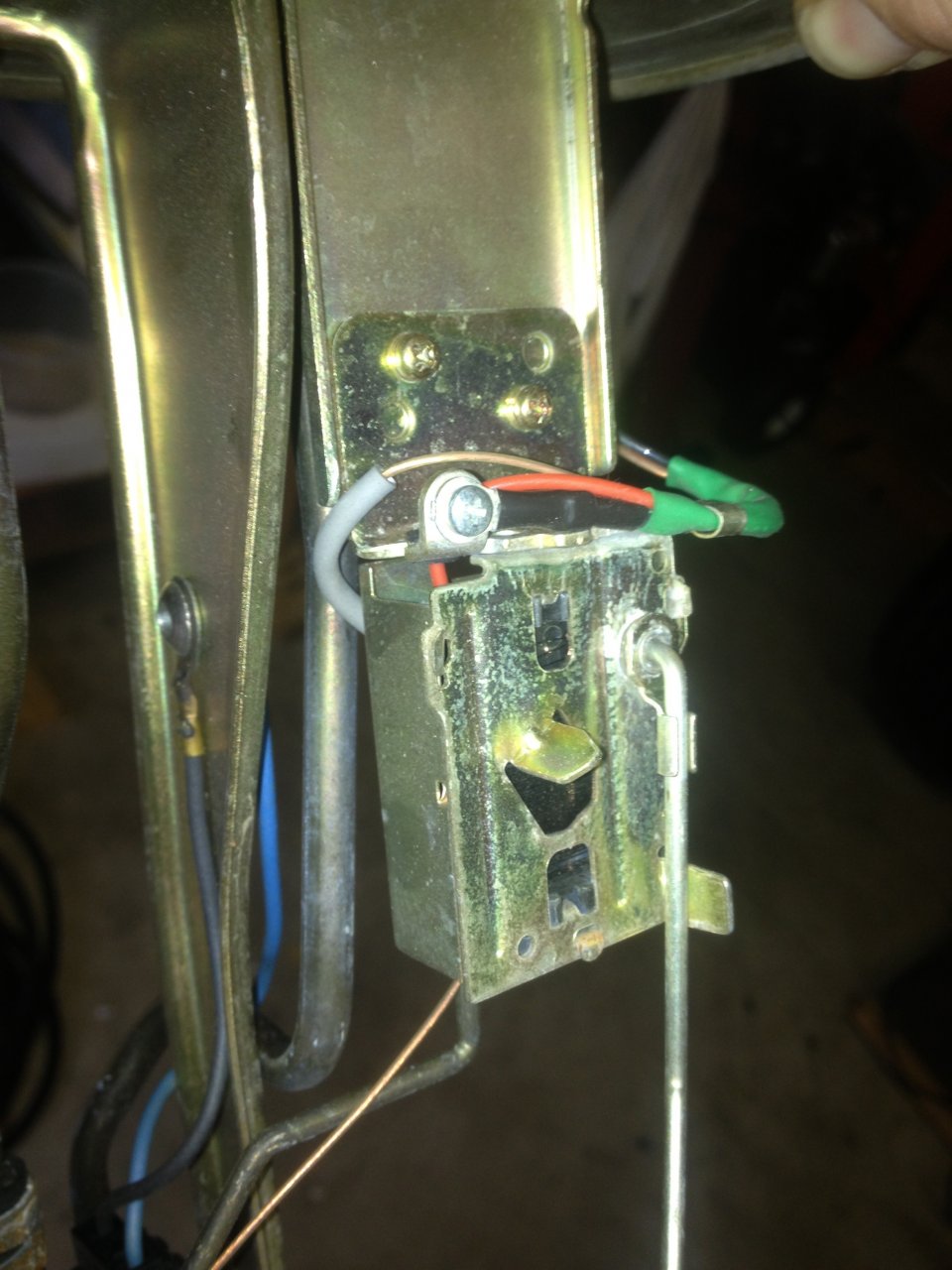 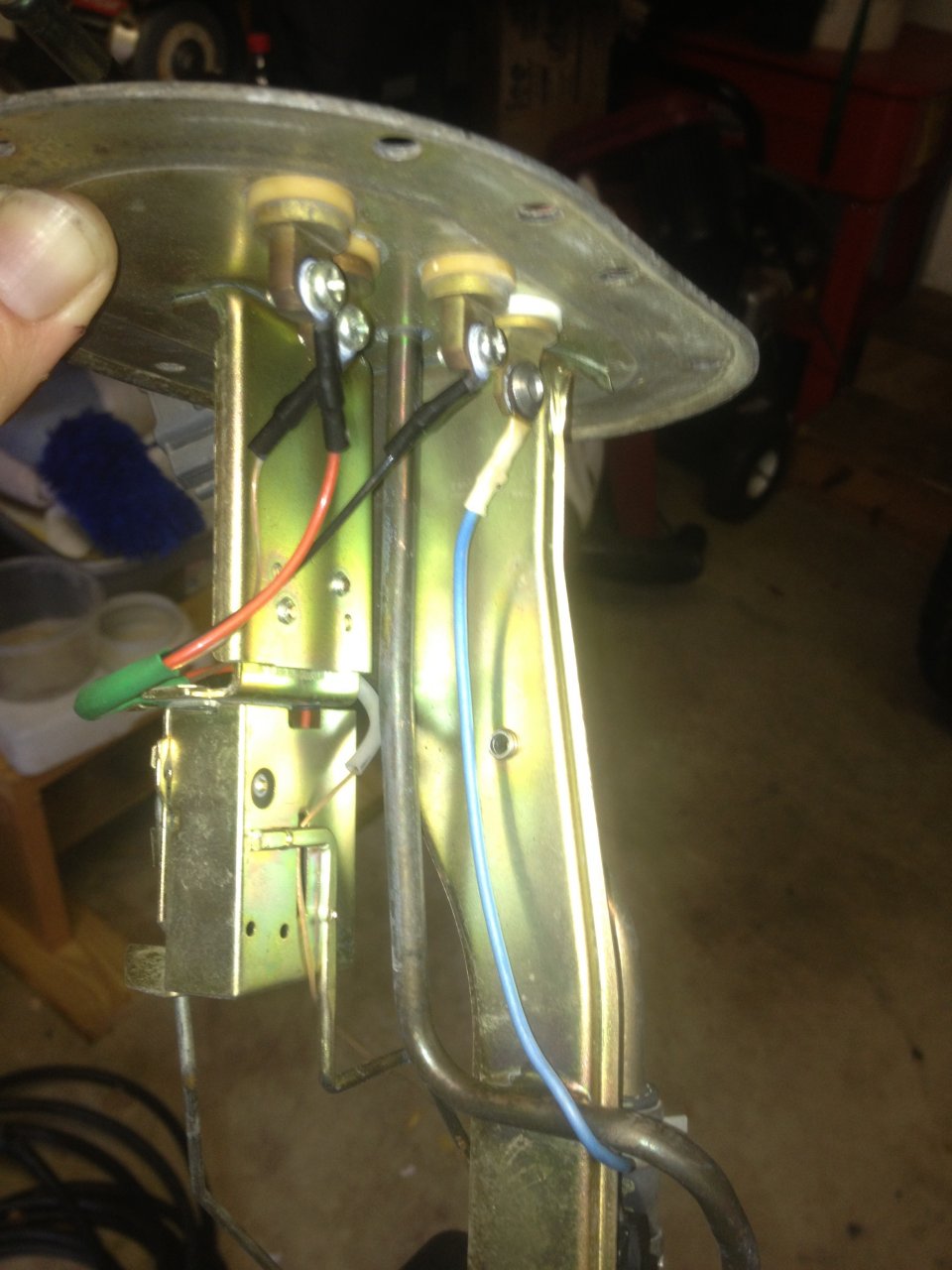 Is this the unit you are speaking of? Must have been identified as problem area because The later models seem to have the gray sheathing where wire passes through assembly.
A

It was the blue wire in the last pic, rubbed through right where it passes under that tube, I assume from the gas jostling it around as that is below fuel level, at least at full. Thank god Toyota put an access panel in the floor my tank was all the way full.

Thanks for the follow up. Should help future searchers and has me wanting to check mine for I'm fighting a random cutoff on initiation of throttle from a constant speed.

I have the same issue last sat while snow wheeling. We were 2' plus deep snow and for the firs time ever, my engine quit. Turned out to be the EFI fuse. It blew couple of more times while flogging the engine hard. We were chained up on all four tires and weren't making any headway so the engine got a good workout. Fuse is fine driving on the road.

My fuel pump "blue wire" rubbing issue was taken care of when this thread first appeared so I know that's not the problem.

Once the weather warms up a tad, I'll check the following items:
- O2 sensor wire rubbing anywhere along the frame, front DS, etc. I was pushing snow with the front ARB so there's a good chance that the O2 sensor wire might have gotten pushed.
- EFI relay - I'll check it but doubt I'll find anything.
- EFI harness by the EGR - might should be fine as I tended to this many years ago. Wrapped with heat tape and all that.

When you were slogging through all that snow you don't suppose you caved in the bottom of the fuel tank, do you? Others that have crushed the bottom of the tank on rocks ended up bending the fuel pump support and that led to a short inside the tank.

TrickyT said:
When you were slogging through all that snow you don't suppose you caved in the bottom of the fuel tank, do you? Others that have crushed the bottom of the tank on rocks ended up bending the fuel pump support and that led to a short inside the tank.
Click to expand...

Sent from my XT1080
You must log in or register to reply here.

I might need a new wiring harness, or do I?