Having followed the various 45 registries here on Mud, I have a question for the "experts" among us: what are the various starting and stopping dates and frame numbers for each of the different 45 series models?

Is there any info about production serial numbers of soft-tops vs hard-tops, fixed-top vs removeable top shorties?

I have read that the 45 series frame numbering started with FJ45-10001--is that correct?

And to complicate matters even more, what exactly are the frame numbering records for the various non-Japanese assembly plants: Venezuela, South Africa, Brazil (Bandeirante), etc. that assembled CompleteKnockDown trucks from Japanese and home-market parts. I'm assuming that the flat-beds assembled in Australia were from cab/frame models sent there from Japan? South American ID (VIN) plates indicate a different numbering system.

Part of my reasons for asking this is to put the various FJ45 models in the Mud registries into perspective, bracketed by a starting and a stopping point, since so many examples seem to have been lost or destroyed over the years.

Bump.
Wish I could help.

Not too long ago someone posted the old assembly plant codes on Instagram. I thought I saved it somewhere, but it isn't in my Cruiser pics folder. If I do find them I'll post them.

Scrolled back a month, and finally found it, but don't think this is what you were looking for. It was posted by @Onur so you might see if he has what you are actually looking for... 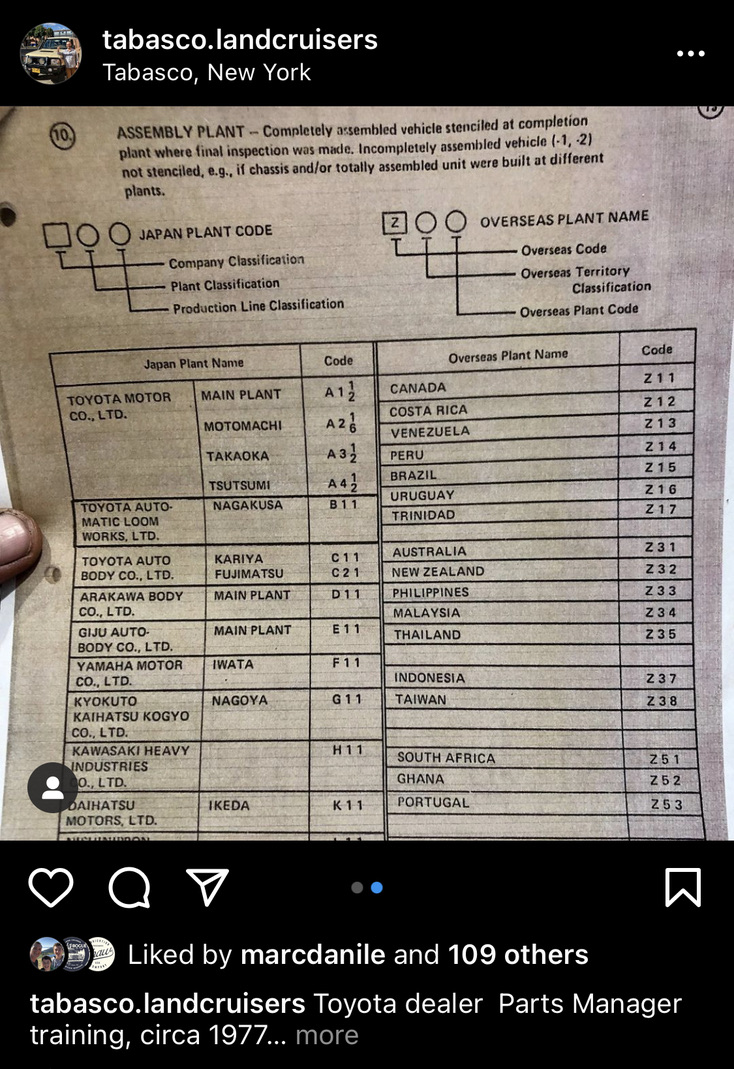 I have all of this information.

My job here is done.

Thank-you, @frismanis . I have seen that before, but no one has ever indicated that each of those plants actually assembled 40-series Land Cruisers.

I'm hoping that Onur or one of the other knowledgeable folks here can share their expertise on the questions I asked above. I do think the answers would benefit the whole community.

Anyone willing to share their knowledge about this or suggest a good place to research it?
You must log in or register to reply here.