I didn't want to hijack rusty_tlc's thread so....

Why is it that up front you see mostly a 3 link with the panhard rather than a 4 link like you see in the rear?

Is it due to steering issues or somthing like that? If you have rear steer do you need to run a 3 link or do people still run a 4?

I am not going to be running this on my rig (leaf springs) I may end up running a 1/4 elipical in the future but that will most likly be a 4 link. I was just cruious and rusty_tlc's thread got me thinking?

triangulated upper and lower 4 link will give you virtually no rear steer. True 4 links are very hard to fit up front.

Or are the couple of beers I have had already getting to me?

front 3-links are common because

rear 4-links are "easy" relatively, and offer minimal rear steer if done correctly....frankly tho, while mine has a little rear steer, it's not noticable on the trail or the road, and mine isn't a double tri like Bruce did....

Anyone have any good reference books on constructing linked suspensions for both on and off road? I've read websites and magazine articles but I'm looking for something more something more in-depth.

Go search pirate for the "God of suspension" thread

More info than you can shake a stick at. Buncha crap too. Read everything then ask questions

usmcruiser said:
I didn't want to hijack rusty_tlc's thread so....

Why is it that up front you see mostly a 3 link with the panhard rather than a 4 link like you see in the rear?
Click to expand...

Others have stated most of the reasons. You will see 3 and 4 links up front with pan hards when using steering using a drag link. It allows there to be little if any bump steer as the suspension cycles because you can place the axle location in the same arc as the steering. The 3 links are used to get around clearance issues of the engine, diff, frame ect. A 4 link can be done and I actually prefer if you can fit.


usmcruiser said:
Is it due to steering issues or somthing like that? If you have rear steer do you need to run a 3 link or do people still run a 4?

I am not going to be running this on my rig (leaf springs) I may end up running a 1/4 elipical in the future but that will most likly be a 4 link. I was just cruious and rusty_tlc's thread got me thinking?

No you aren't required to run a 3 link in rear even if you have rear steering. Like I mentioned about most use the panhard to get better steering, since rear steer is always hydro there is no concern with bump steer as ther is no mech connection from frame to steering to cause bump steer. You tend to see mostly 4 links in rear because there is no clearance issues (well not as may as front) and they are stronger than a 3 link because there is an extra link.

I'm running 4 link front, no aparant problems as yet. links are farily long (37" lowers, 31" uppers) and the triangulation is at about 37 degrees.

the picture attached is with the right side at full droop on an off - camber climb section. I experience some rear waggyness with the upper links being a bit shorter ratio than the front, but it works for me so far. 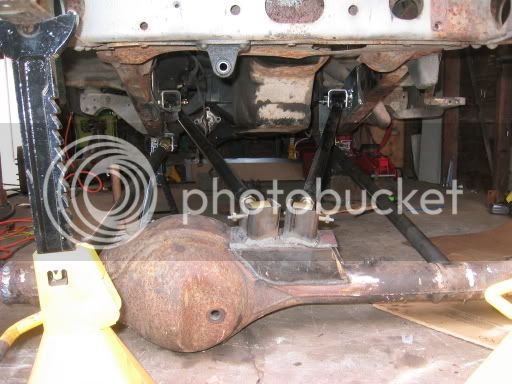 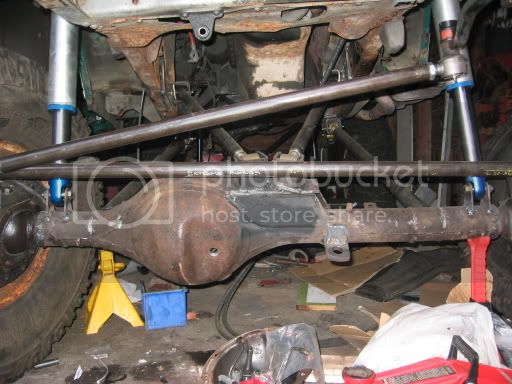 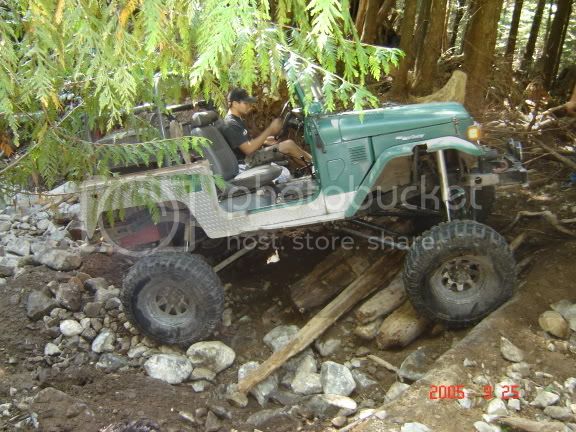 That is such an odd picture. I have never seen one whole side of a suspension unload like that. What is happening there again?

Airshocks unloaded, photo taken at odd angle and just got bumped back down that log after an attempt to go up.

All in all, looks weird I agree.

Don't lie...that's at ride height... better for the speedbumps at the mall..

Just messing with you...

I don't know if your asking me 'cause I ain't greg....but I preffer a 4 link up front mainly because I hate panhards. With the amount of travel that offroad truck suspensions see and the narrowness of rigs (like cruisers) it equals a short panhard which equates to serious side jacking of vehicles during articulation. The other reason is you are relying on a single link to handle rotating forces during braking and accel. I should therefore be built beefier than the other 2, but most people don't do that.

A 3 link which utilizes a heavly braced wishbone and single joint would be by second choise, because to brace properly the wishbone has to be on the bottom for the plating to miss the engine for maximum clearance which then allows the single end of the wishbone to take large stresses when bashing rocks. It also requires for better roll axis that the single joint be placed at frame side, which during a failure would pierce any driveline under there.

Therefore I prefer 4 links. Now there is the thing about the steering, but for me I don't build my stuff to see the street and like full hydro. So no panhard fer me.

A IM discussion Woody and I just had reminded me of something....a offroad steering theory that must be dis-spelled. I read a lot that you MUST have a panhard for the steering to be right on a link-type suspention that sees the street.

THIS IS NOT TRUE. Take for example the pic posted above of BiffS front suspension. This steering will not perform much differnt than if he were running leafs instead of a 4-link. The 4 link on a solid axle only locates the axle in its suspsension travel. Any differences will only be noticed during supension travel beyond what you had with leafs.

Yes a pandhard bar can improve and even eliminate bumpsteer, but a 4 link doesn't make steering any worse...the steering will perform much the same as a leaf sprung rig. What you have gained in steering performance, you have changed in rollaxis for the worse and depending on design of suspension with the panhard many other supesion geometry woes at the extents of wheel travel.

a 3 link front that is not a wishbone style (2 seperate links on the ps and a single link on the ds) with a flat panhard that is the same length as a flat draglink will be the most friendly on road. And can kick ass off road as well. That is the design I currently have on my rig (although I need to lengthen my PAnhard bar and flaten it out a bit) and I can basically use all 16" of my coilovers..

while i did my best to eliminate or prevent as much geometry change thru the suspension cycle, when you have 18" of shock stroke, you will experience some axle rotation, it's a fact. On the street, given that i don't run swaybars right now, i cycle the suspension about 4-5 inches per side based on regular around town driving.

if i were to really reef on it, i could make some passengers soil the seats, but that's more a testiment to how soft my airshox are at their current setting than problems with my geometry.

My focus was on CASTER, and bumpsteer, as i've long been a proponent of the A arm style of geometry mainenance. On trail runs where there's agressive cycling and twist of the axle in articulation , i notice only a slight bit of rear steer from the aft system. I would atribute that to the shorter links in the rear than the front. My rear is presently the |\/| style. over the winter i'm going to experiment with a /\/\ style of rear system to correct that.

As for the need of a panhard bar, i don't feel the need for one yet, an in fact i've theorized that one might actually bind up my setup on straight up and down travel due to the radial arc laterally that the bar would introduce. the 4 link system is intended to be without lateral shift on true up and down style of cycling. Articulation would not be affected by the panhard bar IMO.

with the lenght of the arms, triangulation that i've used, and the Johnny joints, i feel that a hydro assist is manditory. when i had the ram off for re-location , i had some instances of deathwobble over washboard on the street doing exactly 30 - 33 mph range. strange harmonics i guess. going faster or slower: wouldn't happen. now with the hydro over the same section, same speed; no wobble. I've added some extra caster to make sure too.

One thing to consider with leafs is that in a fron suspension setup, the section of leaf from the fixed hangar and axle is in essense a "link" and the forward section to the shackle is mostly part of the "spring" equation. Now it is also true that the leaf locates the axle laterally which is why the talk of the panhard or track bar comes into the situation. as the rear bushing wears, it allows a point for slop, inducing wobble.

this setup actually allows lots of clearance of the oil pan. No problems with contact there.

If you are building a rig from scratch the 4 link front is not that hard as you can build the links and then worry about engine placement and the like.

With mine, the 4 link was a major bitch to squeeze in there, keep everything low and then run an exhaust.

As for road handling, with my triangulated 4 link I have no bumpsteer and it tracks perfectly down the street.

Ruh roh
You must log in or register to reply here.