It had 220k miles and was sitting for 5 years, when I bought it and it came in on a trailer.
I had to winch it up the driveway and into the garage BUT its mine.
This will be my new DD. My plan is to make it as comfortable to drive as I can, keep it stock and rebuild it as reliable as Toyota would. I also want it to look cool with a differant paint job and updated wheels.

The paint was in bad shape. The motor would not start, 2 stuck valves, clogged fuel lines in the tank, stripped exhaust bolts and spark plug threads in the head, broken timing guides and cylinder walls that were in very bad shape. The front axles were thick with crud from the leaking gear oil. But the body was mostly straight, minus some rust. The interior was in fair shape minus the cracked dash pad.

The previous owner sold it to me with a brand new head loaded with new valves, cam and rocker arm assembly. He also threw in a new rebuild OEM Asian carburetor from National Carburetor.
I started In November 2013 and finished in July 2014, I have put over 500 miles on the truck and I must say I am very happy with how it is so far.

I'll post a few progression pictures, more picture can be had by clicking the link in my signiture.

PO sanded and primed but after a few years it all rusted...

Wonder what is under all that dirt...

Head is off and time to look at the cylinder walls...

Not good, it gets a trip to the machine shop.

Borrowed a lift from my good friend Lars.

Keeping motor parts in some kind of order.

Doing some house cleaning and de-smoging while the motor is out.

Rust removed and repaired at the battery tray.

Block was bored over .030" and .010" was tacken off the deck.
Could not figure out why timing was so off untill I looked at the cranck pulley and noticed the mark did not line up with the keyway.

New clutch and all in but no start; fuel lines in the tank were very much clogged.

Tank and fuel lines cleaned out, motor gets fuel and all is good. The sound of a 22r is beautiful music.

now that the motor runs I move on to tackling the body work.
windshield has to come out.

All the body work finished, its time for primer and then some Monstaliner.

Room in my garage was tight so I staged the painting, bed and panels in one stage then cab in the next.

Under carrage gets a coat of black chassis saver before the bed goes back on.

Interior gets sound proofing. I used UltraTouch from Bond Lodgic.

Not as quiet as my Lexus but real close and great for an old truck.

Finishing up under the hood.

This is where all the prep work shows.

This is how I'm driving it.

I wish I was a better photographer, some of these pictures suck and I apologise.
My future plans are to replace the stock suspension with maybe a set of OME 2"

fantastic. love the extra cabs. thanks for saving it.

Very nice. I'm shooting for the same thing, a comfy but durable and reliable DD.

I used Monstaliner just today on my bumpers, and I also coated the front crossmember of the frame. The smell is about to drive me out of the garage for the night, but it looks pretty durable.

Thanks For all the kind words.
I had a good time doing this build. I taught myself quite a bit about body work and paint, spending over two full months dismantling, preparing, priming/painting and reassembling. My wife though I was completely obsessive with it all, I didn't disagree. I didn't want to be the guy who had that old beat up truck he'd been working on for years, which could of easily happened. From the start my plan was to not stop till I was finished, then in a very unceremonious moment hand over the keys to myself.
The Monstaliner turned out really nice. I ordered the off the self color, pyroclastic to come close to the original color of dark metallic grey. If I would have to do it again, with all the unexpected work I put into it, I would do a complete color change to desert dune. That said I'm happy the way things turned out.

There is also a burning question and that is how much is this truck really worth?
Without actually putting it up for sale, I may never know, any guesses?

Two months? I've been working on mine for FOUR YEARS. The last several weeks have been a frantic rush, if I'm not sleeping, eating or at work, I am in the garage. Sometimes it's just not such a good thing being an OCD perfectionist.

Worth? That's a tough one. You should call your insurance agent and have a chat. State Farm isn't willing to go much higher than NADA, which in my case is around $3800, assuming High Retail value. Pretty sad. I'm gonna be looking at other companies and might even get an appraisal done.

If the cab would of come off I might be looking at years, my wife might have left me though.
I initially expected to do this in 100hours max over 3 months. It took over 400hours and 6 months
Your frame off restore will be amazing. Even when I was sleeping I was dreaming about solutions I needed to workout.

I might end up getting an appraisal. My concern is, replacement value...

My wife deserves a medal and a nice vacation for putting up with this. Parts all over the house, long hours, lots of $$$, washing my filthy and greasy shop clothes, etc.

I hope to be driving it in a few weeks. I registered it on Friday, waiting for my new vanity plate to get here now. Need to put the project aside for at least this week, my little girl is getting married next Saturday so it's gonna be crazy here with a bunch of house guests and cooking. Getting closer... 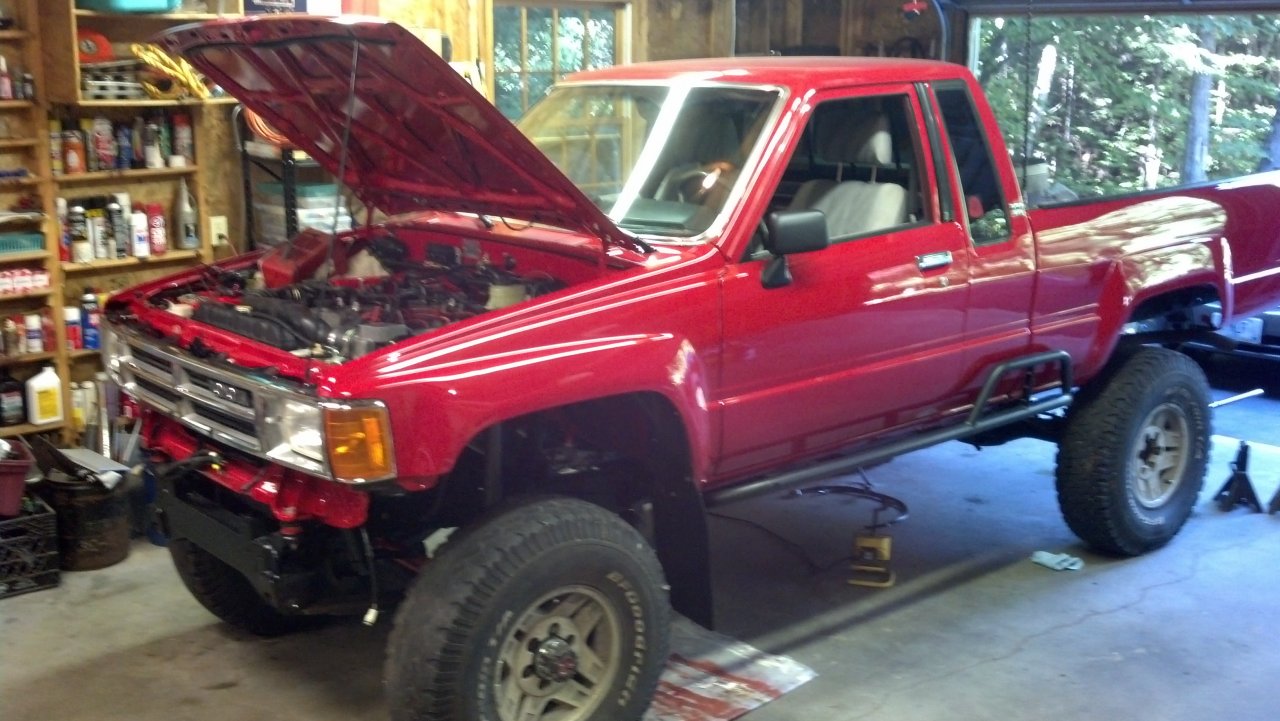 You fellas are making me sick. Wish I hadn't sold mine. Best pickup Toyota ever made.
You must log in or register to reply here.

S
Transporting 22RE engine for rebuild