UPDATE: Back from Reconstructive Surgery

For those who read my post before taking the FJ in for reconstructive surgery... some photos. Sorry they are lame parking lot photos. I'll take some cool ones later.
I'm pleased to have it back in my custody with the improvements made.
Before 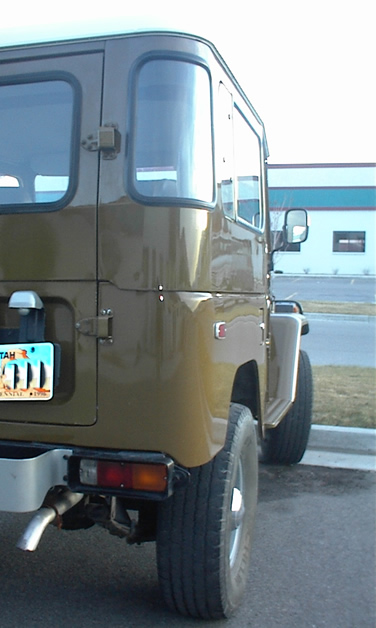 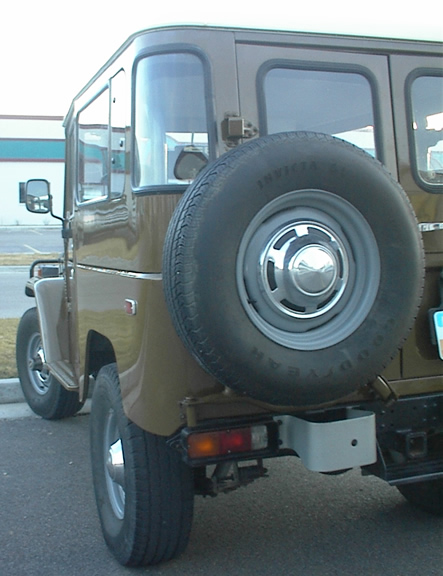 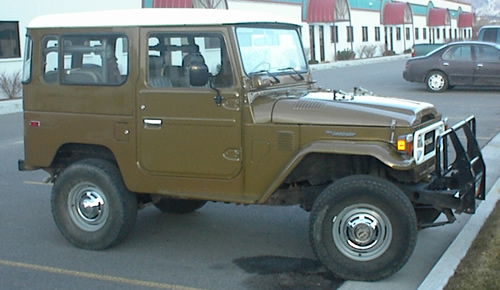 Nice looking Land Cruiser. I have always liked that color.

OK so I missed the other post. Did you do this work yourself or had it done? looks nice! what did it run(if had done)?

Truth is a torch that shines through the fog without dispelling it. Always be true to your work, your word, & your friends, & you will never live a day without peace

I saw your other post and was wondering how the replacements would turn out. Was thinkin about takin a wack at it over christmas break and now im afraid your pics have made me extremely jealous and Im forced to hit up Santa for some new quarters. Whose repro quarters did you go with?? Your rig is lookin very sweet at this point.
89 62 Ironmans, Arb, 33" BFG's

Well, heres the report:
All in all it was a good repair as 98% of my body rust was on my quarters. Hard to see in my before pics, but there was quite a bit of surface rust and a lot of bondo from the P.O.

I used CCOT galvanealed steel panels(to hopefully slow the rust from coming back). They are thicker steel that the stock panels - but I do have a '79, and I've heard the later models had thinner metal than the older. So it may not make a difference to some of you with older rigs. The Auto Body guy said the panels weren't an exact fit (required some trimming) but had no complaints. He said they were well made, great panels for replacement. They were about $300. [You're welcome CCOT]
- Now the labor cost is the tricky part. Originally, I was going to hire the welding out, because that is something I'm not well versed in. But then the owner of an auto body shop came to me to design a new home for him. I thought, I can design a residence much better than I can do body work... so I offered to trade him. He was more than willing to do that.
Bad thing is, I didn't get a written quote from him to start with. I should have had three or four places give me a quote so I could check his pricing. But, he had done some work on a car I had previously. I knew he did a good job and was fair with me, so I didn't worry about it. If I were to do it again, I would have just taken the money and had another shop do the work. Originally, we verbally agreed to a straight across trade, but gave me a bill for like 700 hundred more. I think he just inflated his bill so he can still make money...I've talked him down quite a bit but, I'm still working that out with him. He did a great job installing the panels... the paint isn't an exact match, but its pretty close and looks much better than the rust and primer.

Moral of the story. Get several quotes if you hire it out, but get someone you know will do a good job. If you can do it yourself, do it. I think even if I pay him a couple hundred on top of the trade value. Its still worth it to me, because I am much better at my day job than body work.

i'm good at drawing smily faces, i'll trade an original smily face picture for the 40 of yours ResidualBoulders. jk i like the car looks great
77 fj40 31in firestone m/t's and a bunch of other b/s i can make up 4 you if you'd like
You must log in or register to reply here.

Importing from Canada to the US back in the day?