Fellows, I've decided to rebuild my tranny myself for the education.

The below is a narrative of an email to Rodney in OZ about the tranny.

The trans (A440F) has been acting weird lately for the past 6 days and it's finally come to a head. For the past 5 days the trans felt like it "released" the engine before it would upshift from 2nd to 3rd. By "released" I mean that the engine would rev say from 3500 rpms up to 4500 rpms before the trans would step into 3rd gear.
Well yesterday, the trans does not want to upshift to 3rd gear. I have to feather the gas to find 3rd, but that's only momentary.
At the same time I have checked reverse and found that I have to go to full throttle for reverse to kick in, otherwise I can go to 1/4 throttle before the rigs ever starts to move.

History of the Trans:
About three years ago the trans was rebuilt by a local tranny shop.
It over heated [A/T Oil Temp light] on 2 or 3 separate occasions after the rebuild and I replaced the fuild every time it over heated. Then I bought a tranny cooler from AutoZone and installed, the largest square inch I could find.
Not that this has anything to do with the trans operation, but the speedo cable broke last week the same time the trans started acting up. I just replaced the speedo cable last night.
Additionally, I was wheeling about a month ago and this hill was giving me hell. On four occations I got to the top of the hill and the rigs was rev'ing but not going anywhere. (wonder if I burnt something, ya' think)

So I've started the operation and will be replacing the clutches once I pick them up.

By the way, I bought the A440F rebuilt book from Toyota. That's the first thing one should do.

Here's a MUD salute to the operation. 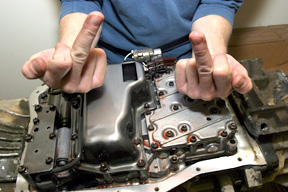 Here's one with the tranny fully disassembled.

You'll have a little trouble taking the oil pump out if you don't have a special tool. This is easily overcome by placing two bolts on the oil pump (used for pulling it out with the SST) and rotating it until it breaks free.

Once the pumps out just start taking the components out. 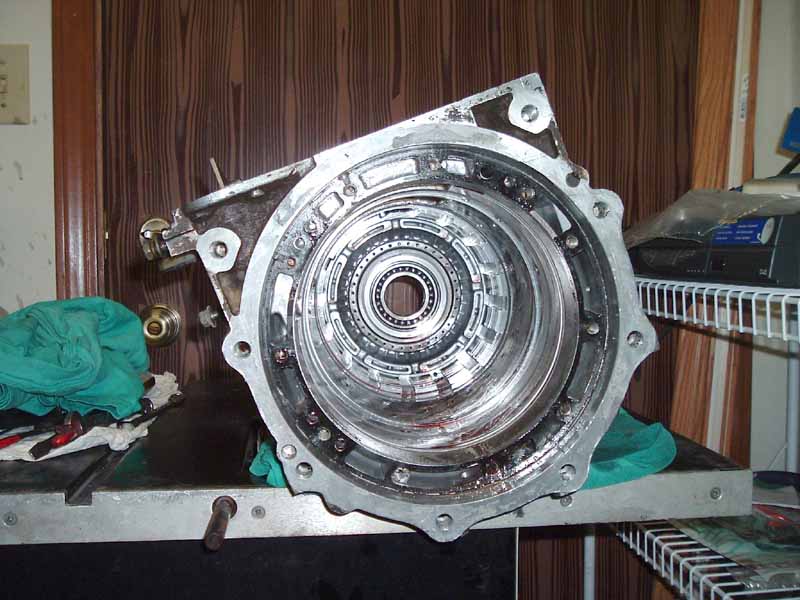 Jim dosen't that require special tools. I know the chevy trannies I've rebuilt do. Oh and by the way good luck, if you need some help give me a holler. I will come if the wife will let me off the leash.

peebles24 said:
Jim dosen't that require special tools. I know the chevy trannies I've rebuilt do. Oh and by the way good luck, if you need some help give me a holler. I will come if the wife will let me off the leash.


Yeah it does. I have tried to get them from the Sealership but they say it's only a purchase for the service guys. Most of the special tools I need are for attachments to a dial indicator, but two or three special tools are for compressing springs. If I can't get the springs off, I'll have them made by a local machine shop, that's my only option.

I know that Slee offers a swap for Rodneys transmissions with the modified valve body. Was that option considerably more than what you're doing here?

These clutches are from the Brake Band & Multi-Disc Clutch (or Clutch C2 when looking at the manual.) These clutches should have material on it. Guess that's way I had no up shift. 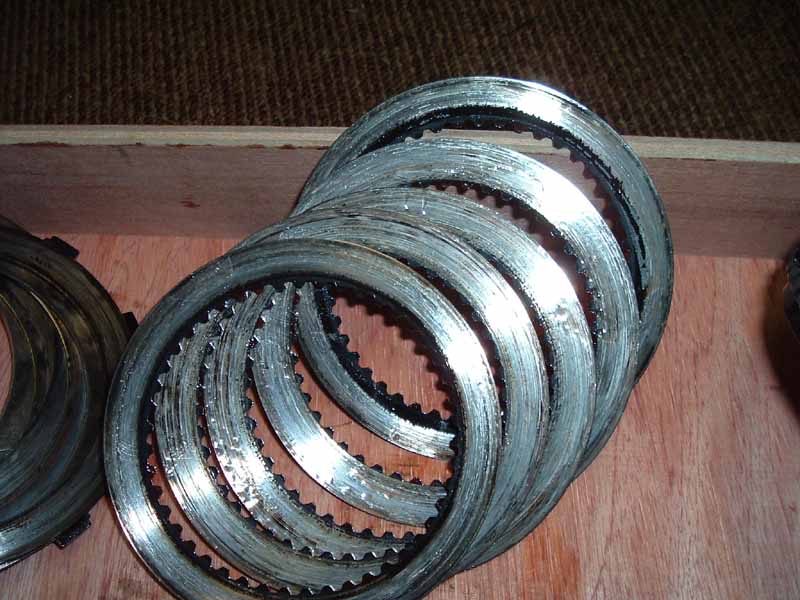 landtank said:
I know that Slee offers a swap for Rodneys transmissions with the modified valve body. Was that option considerably more than what you're doing here?
Click to expand...

Yes, it was a serious consideration. I wanted to buy an Extreme tranny/valve body from Rodney but my wallet had other plans.

The rebuild kit from "Axiom" is sub $1K for all seals, gaskets, clutches and steel plates.

One brave man, good luck. If you need help, give me a hollar.
R

http://toyota.spx.com is where to get the toyota special tools. 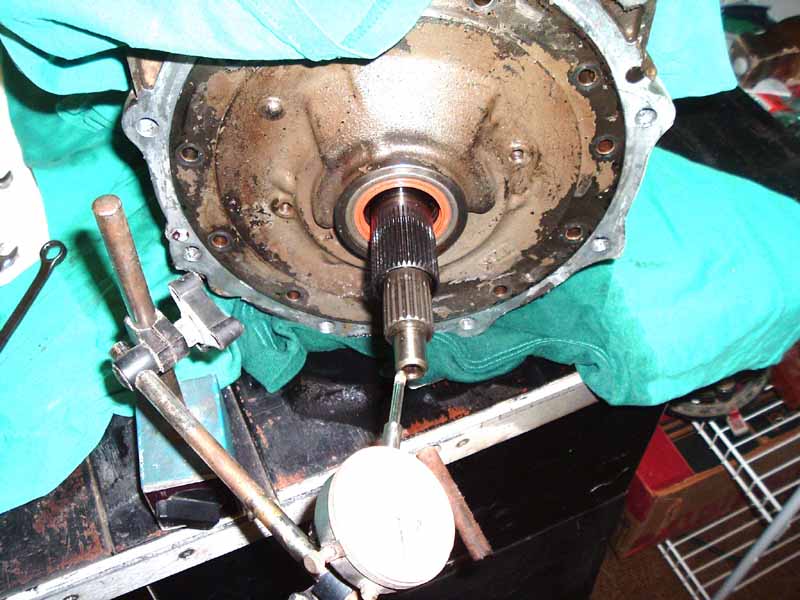 Rich said:
http://toyota.spx.com is where to get the toyota special tools.
Click to expand...

Rich,
Thanks so much. My two local Stealerships did not give me any value added information. One would not give me the information and the other did not know what I was talking about, "SST. . . What's an SST"

Here's a shot of a steel plate. It must be replaced. 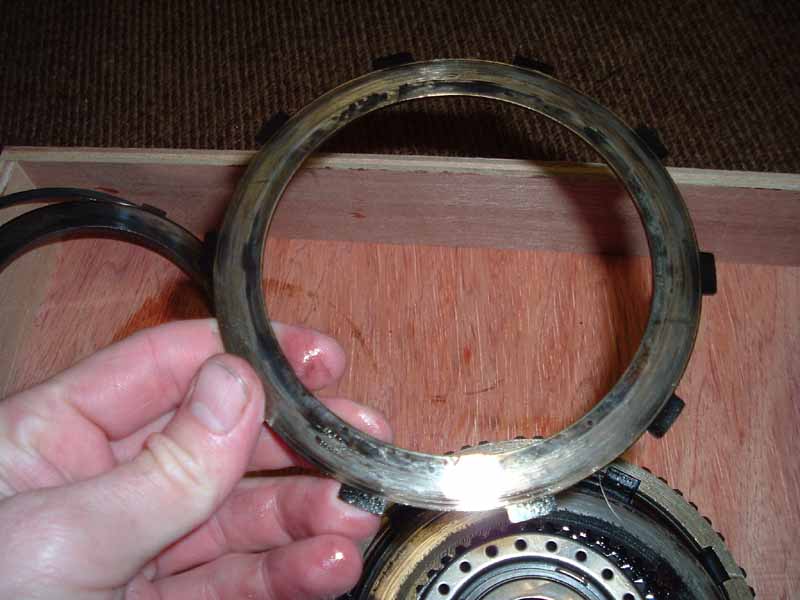 Regretably the SST's he inquired about are discontinued.

cruiserdan said:
Regretably the SST's he inquired about are discontinued.
Click to expand...

CD, Even the SST kit that's on SPX?

Here are all the clutches 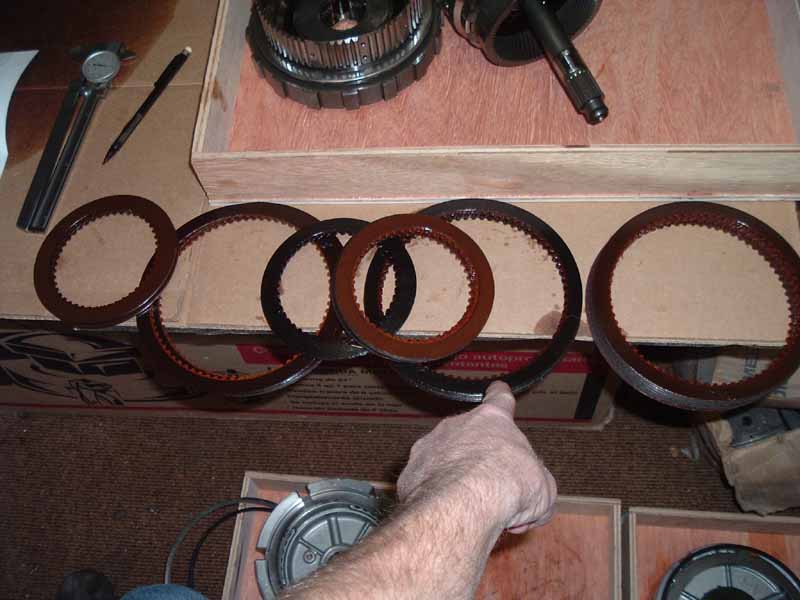 One question - doesn't the tranny weigh a ton?
How'd you get it in your workspace to begin with?

3 years on a rebuild, i hope you at least gave them a call to tell them they suck at rebuilding.

jklubens said:
CD, Even the SST kit that's on SPX?
Click to expand...

cruiserdan said:
Regretably the SST's he inquired about are discontinued.
Click to expand...

Lubens, I'd suggest that you call the contact number at SPX. They are not a Toyota company. They are a partner of Toyota. OTC is a tool manufacturer that SPX acquire, and they make general purpose automotive tools in addition to the special tools they manufacture for a number of auto companies. It is possible that for some of the Toyota SSTs they may have an OTC version that may be sufficiently similiar to get the job done.
You must log in or register to reply here.

Users Who Are Viewing This Thread (Users: 3, Guests: 1)

Thursday at 8:02 AM
Pericles

Looking for Recommendation: Mechanic in the NY / CT / Tri-State Area?