Here's a picture taken from the top of the steering column with the plastic shroud removed. First step is to loosen the bolt holding the pawls in place. Second step is to rotate the bushing until the slop is gone. Finally tighten the nut loosened in step one and replace the shroud. I'd also recommend cleaning and re-greasing everything, but that may not be necessary. 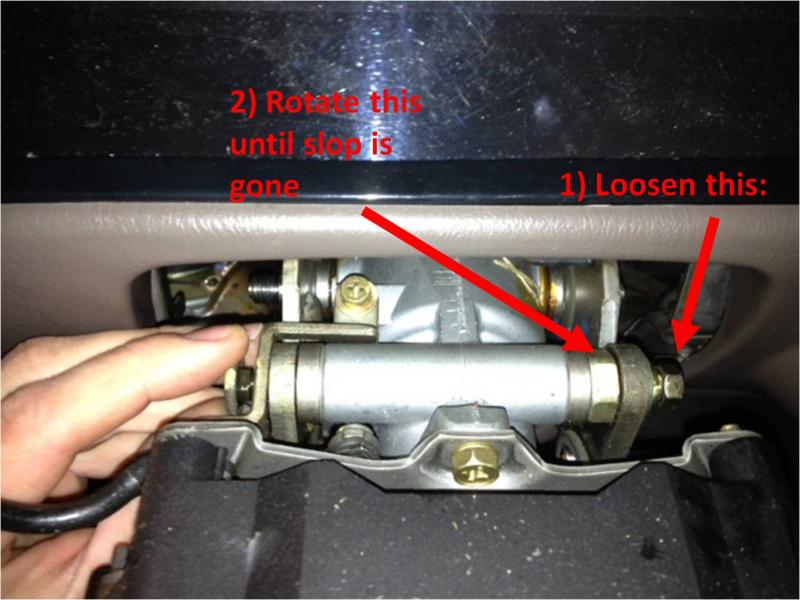 Nice documentation. This is FAQ worthy I think.

Thanks for the tip! just tightened mine up, no more slop

Nice! Glad to see it confirmed in somebody else's rig.

Had this problem too...just disassembling it and cleaning off the old dried up grease with solvent and a wire brush did wonders for mine. I reassembled it with a small amount of good quality grease and the "slop" went away. No new parts were needed.

One hint: The nut on the long bolt that holds the pawls in place should not be too tight, as this sets the friction in the mechanism.

Good point, I noticed that too.

Been driving for a few days and it's still tight! I'd say she's fixed.

Also, I finally checked the FSM and it seems to show this procedure in the upper left diagram of the attached page. I think step 8b might be where it's mentioned.

It also shows what the differently marked stoppers are for. Apparently, they are all different widths. E is the narrowest and A is the widest. You're supposed to choose the one with the proper width so that the marks align (mine don't align). Apparently, they expected these things to wear or they didn't make the columns with very tight tolerances? So, if rotating the bushing or getting tighter springs doesn't work for you, maybe try buying the wider stoppers (if they are even available anymore). 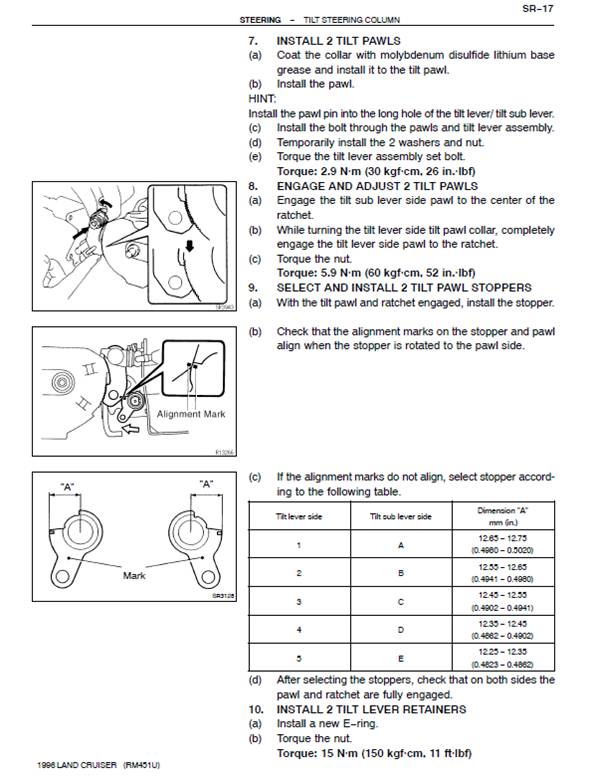 Fixed ! This post just made my day. That 1/4" of vertical play in my steering wheel was driving me nuts. Thank you for the excellent documentation. Took a while to stumble on this in the search program. Maybe it would be added to the FAQ if enough people are having issue. Thanks again.

Awesome! I forwarded it to Romer but I don't think he had time to look at it yet.

Nice job Darkness, rotated the eccentric shaft a "wee bit" <- tech term alert.... and all is well. I think it was about 1/8" of rotation and that's all it took!!

This is great, thank you. I've had significant play in my steering column and this fixed it 98%.

Forgive me for being presumptuous for a newbie but there is also an additional fix I found on ttora and have done on my Tacoma with great success. I had nagging play in the Tacoma steering column on larger or quick bumps, so 4 years ago I did this fix and today there is still no play in the column. Both the 80 and Tacoma have a slip joint on the steering column main shaft which can develop play over time. I've now done this for the 80.

The fix from ttora was to either tack weld or install a dowel pin through the slip joint. Note this is potentially a safety concern because supposedly the shaft is designed to collapse in a crash. Some concluded on the other forum that the strength of the tack weld or dowel pin is much less than the other safety mechanisms and therefore would sheer or break readily in a crash.

The main shaft per the FSM must be removed from the column housing. The tilt mechanism does not have to be disassembled for this. The lock cylinder must be removed and requires tapping the cone bolts. I used a 1/8 drill bit and then tapped in a T-20 torx socket. The shaft cannot be removed without this step, as the shaft lock must be removed to slide out the shaft.

To remove the swivel mechanism bolt studs I used a 19mm closed wrench, a washer, and the nut setup as a puller. The large spring will fall out once the lock cylinder and swivel bolt studs are removed.

The main shaft on my 80 appeared to have two places where either it has been pinched or had a dowel pin installed. Honestly I could not tell. I decided to go ahead with installing a dowel pin. I drilled out the shaft as shown in the photo and installed the dowel pin.

For assembly, the large spring is a PITA. To reinstall I had to install the swivel bolt studs first, then squeeze the spring back into place from above. I didn't think it was going to work but finally succeeded. 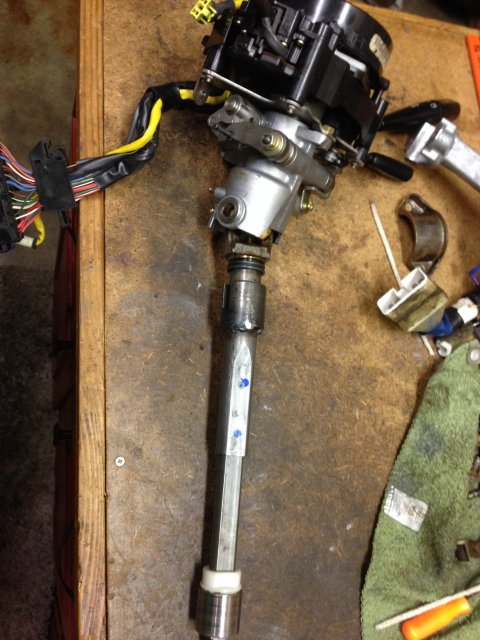 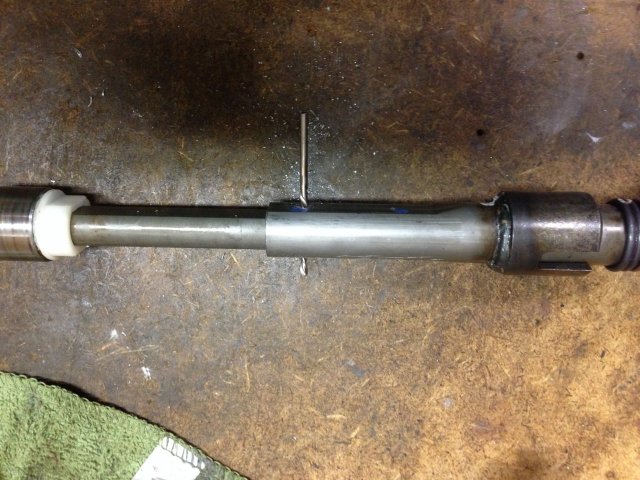 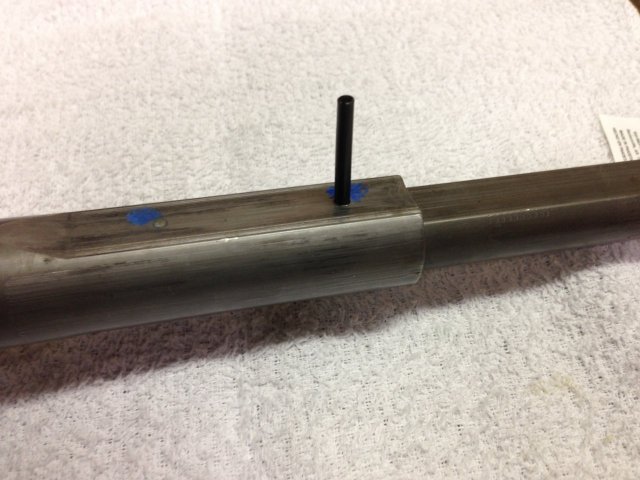 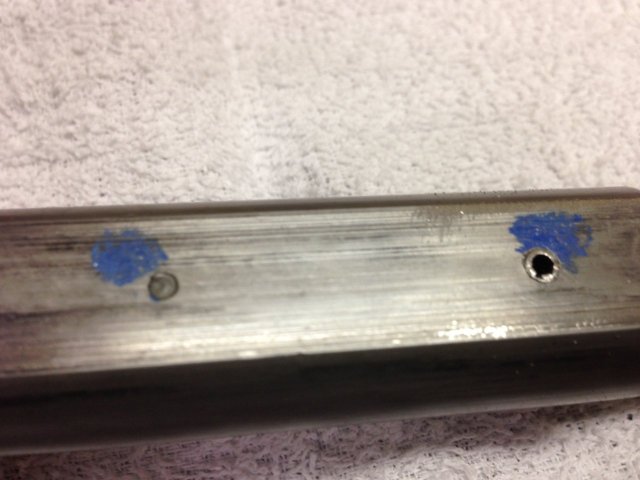 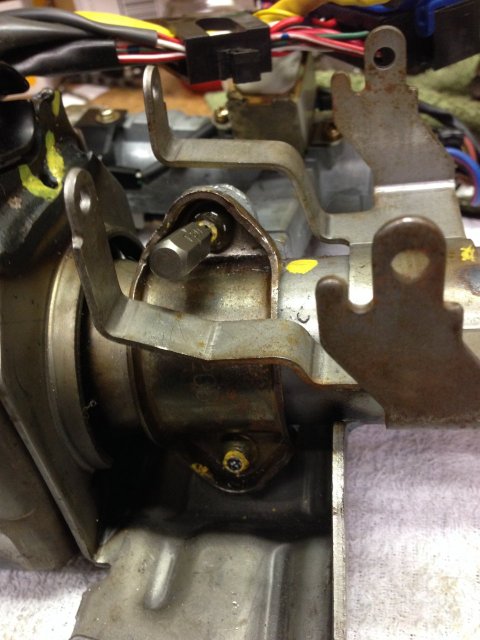 Nice. I had the same problem with my tacoma. My 80 doesn't seem to have significant play there.

Is this thing in the FAQ yet ? It should be, first time I searched it took forever to find this.

Cannot wait to look into mine this weekend; this thread and its results gives me hope that my issue--while small in stature and real "need" to solve--is going to get done. And it seems half banana, which saves me some bananas for my front axles, brakes, speakers installs, ad infinitum.

Worked on my tilt mechanism with help from these photos/Darkness's experience; made a big difference. One major issue as mentioned is that the original grease over the years turns into a sticky paste preventing free movement of the small parts IMO. I disassembled the pawl mechanism, bushing, and cross bolt, cleaned off the old grease, adjusted the bushing and applied a lithium based silicone grease (Dow Corning Molykote 33 Medium) mixed with a touch of a moly paste. Tilt mechanism works better than ever now.
Last edited: Aug 30, 2014

Mad props to @DARKNESS for this how-to and that top-down picture! I just did this and my small amount of slop has turned a major annoyance into a steering wheel that feels solid solid solid. Night and day difference when driving on rough roads. Thank you!!!

So need to look into this today!

DARKNESS said:
Here's a picture taken from the top of the steering column with the plastic shroud removed. First step is to loosen the bolt holding the pawls in place. Second step is to rotate the bushing until the slop is gone. Finally tighten the nut loosened in step one and replace the shroud. I'd also recommend cleaning and re-greasing everything, but that may not be necessary.
Click to expand...

Can't believe it took this long for me to bump into this thread. It took me longer to take the cover off than fixing the slop, since space is limited I just used a pair of pliers to turn the nut about 1/4.

Now there is no slop what so ever! It's now tighter than a virgin sphincter, amazing!

I may have to rewrite this into a how to thread with the fix on the first post. Seems like it's hard to find.
You must log in or register to reply here.

J
Turn signals do not work after replacing steering wheel