Slow progress. Got the engine wiring harness installed. Working on a bracket for the ECU.

Engine mounts are welded up and painted. 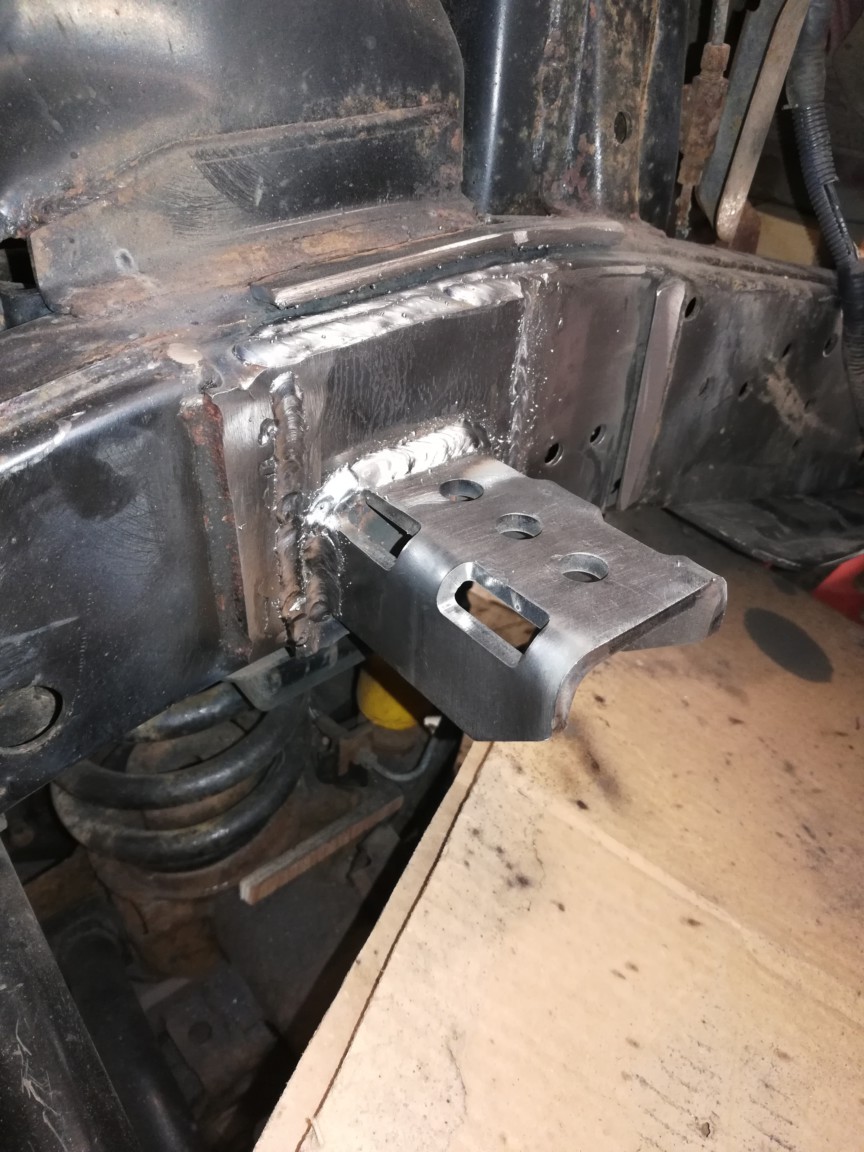 And finished an adapter for the oil pressure sensor. 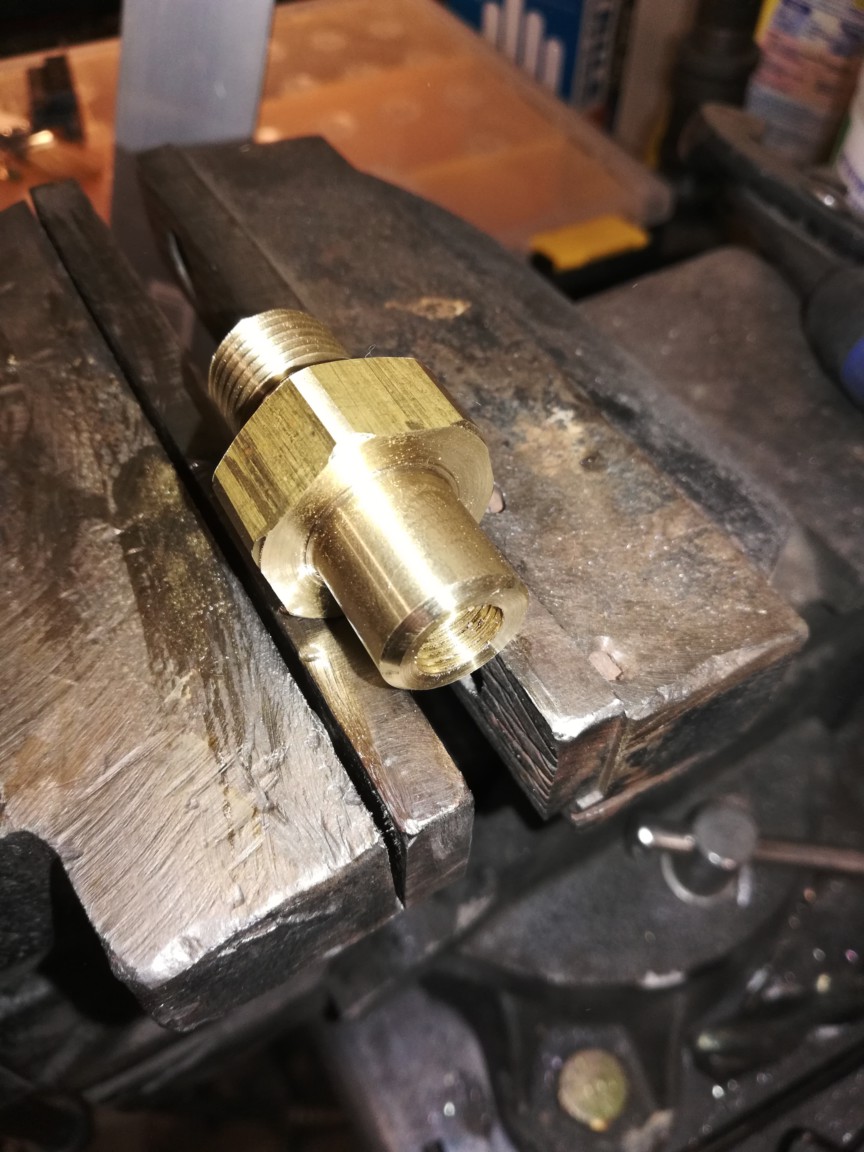 You fabbed that adapter??

CO_Hunter said:
You fabbed that adapter??
Click to expand...

Yep - I have a little harbor freight 7x10 metal lathe that I picked up on CL a few years ago. 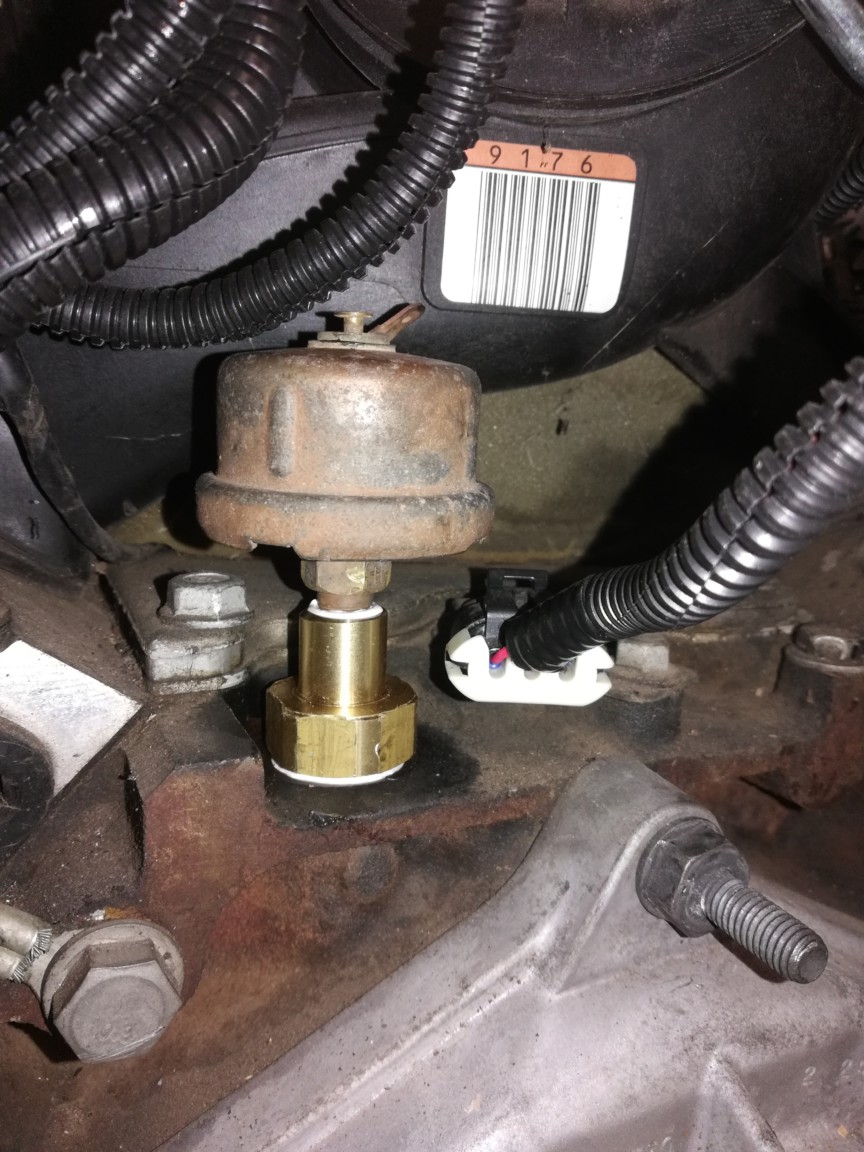 Haven't posted on this project for awhile - progress slowed for awhile when the robotics team was consuming 25+ hours week. But stuff was still getting done - shifters are sorted out (I think), as is the throttle pedal and ECU & TAC module mounts and the engine side of the wiring harness.

And tonight, Nate and I finally set the engine in the bay and dropped the bolts through the mounts! I've literally been having nightmares about those mounts not lining up!

Hopefully it's in there for good now. 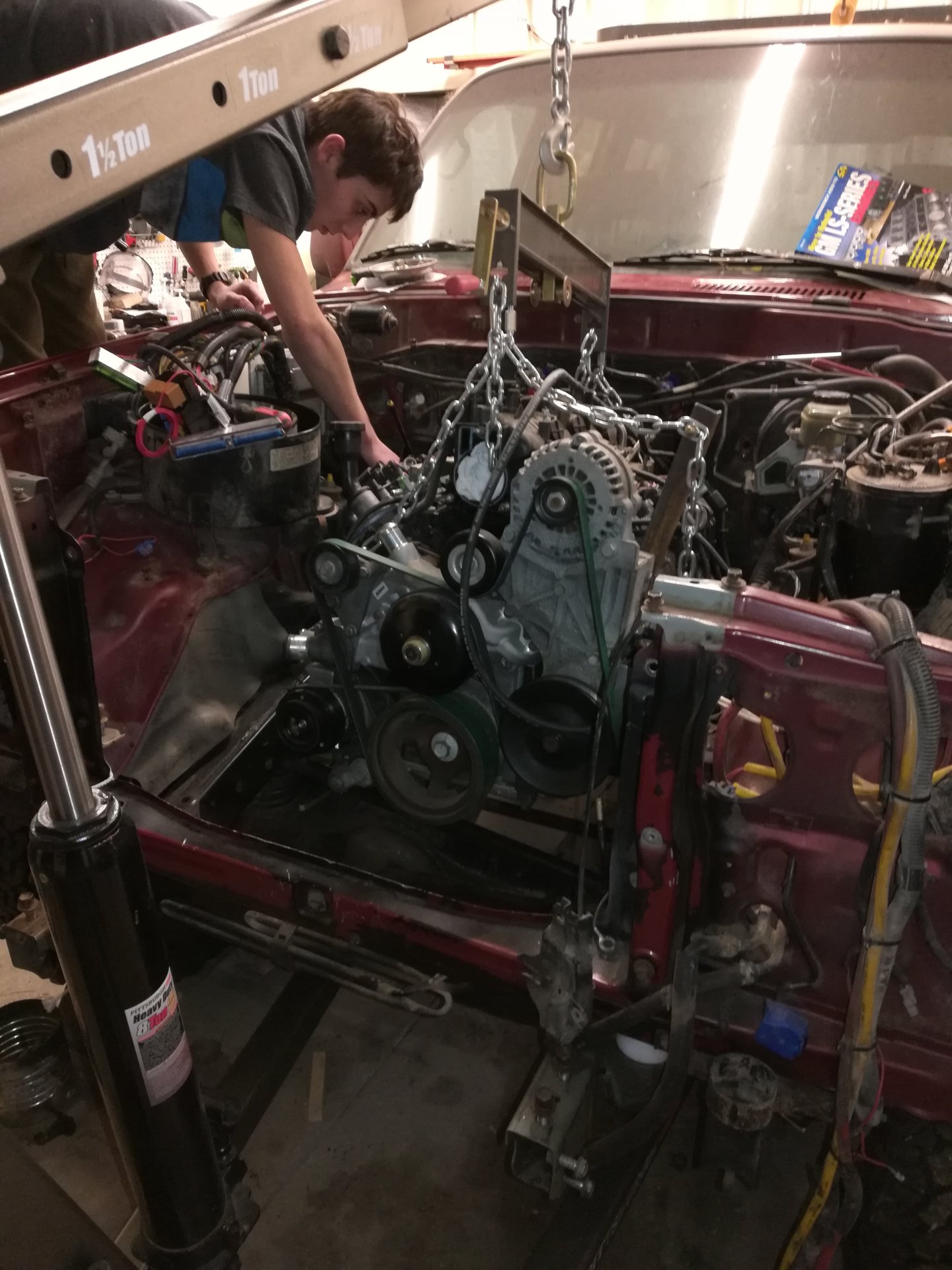 Still progressing slowly - plumbing is almost done, starting on the wiring. Working on the gas pedal harness today. Thought I'd share my experience with a product that's new to me - the heat shrink solder & seal connectors. 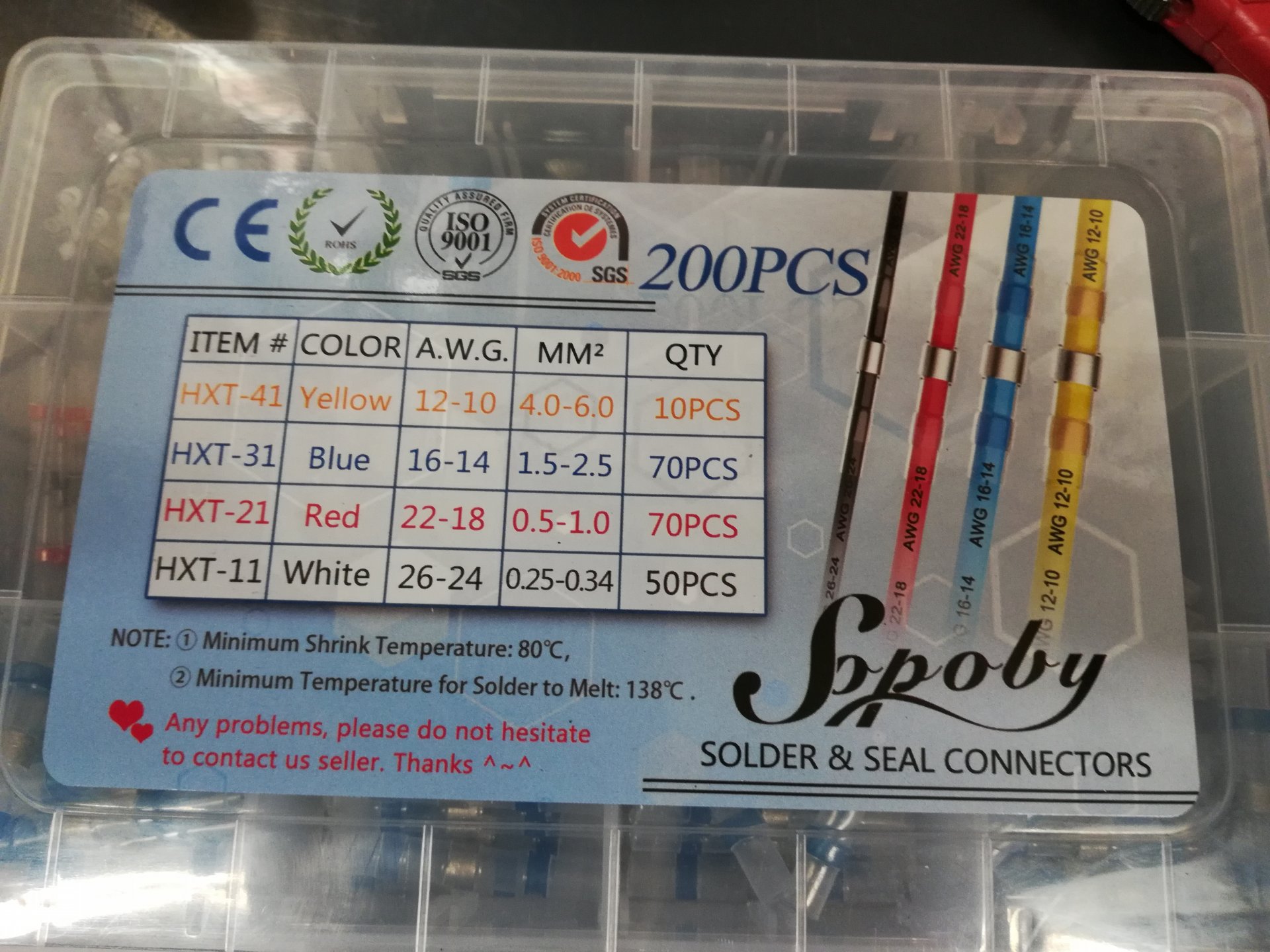 It's basically a tube of heat shrink with a band of hot melt adhesive on each end, with a band of low melting point solder in the center. You install it with a heat gun.

I made up some test splices with 16ga wire and compared them to traditional mechanical crimp butt splices - also heat shrink adhesive lined, and crimped with a good ratcheting crimper.

I'm pretty impressed with this new stuff. I was able to pull apart the mechanically crimped connections - granted with a lot more force then I'd ever hope to have on a lwiring harness. The wire actually broke where it entered the splice - it didn't pull out. That suggests mechanical damage to the wire from the crimping - which might make it subject to fatigue failure down the line. 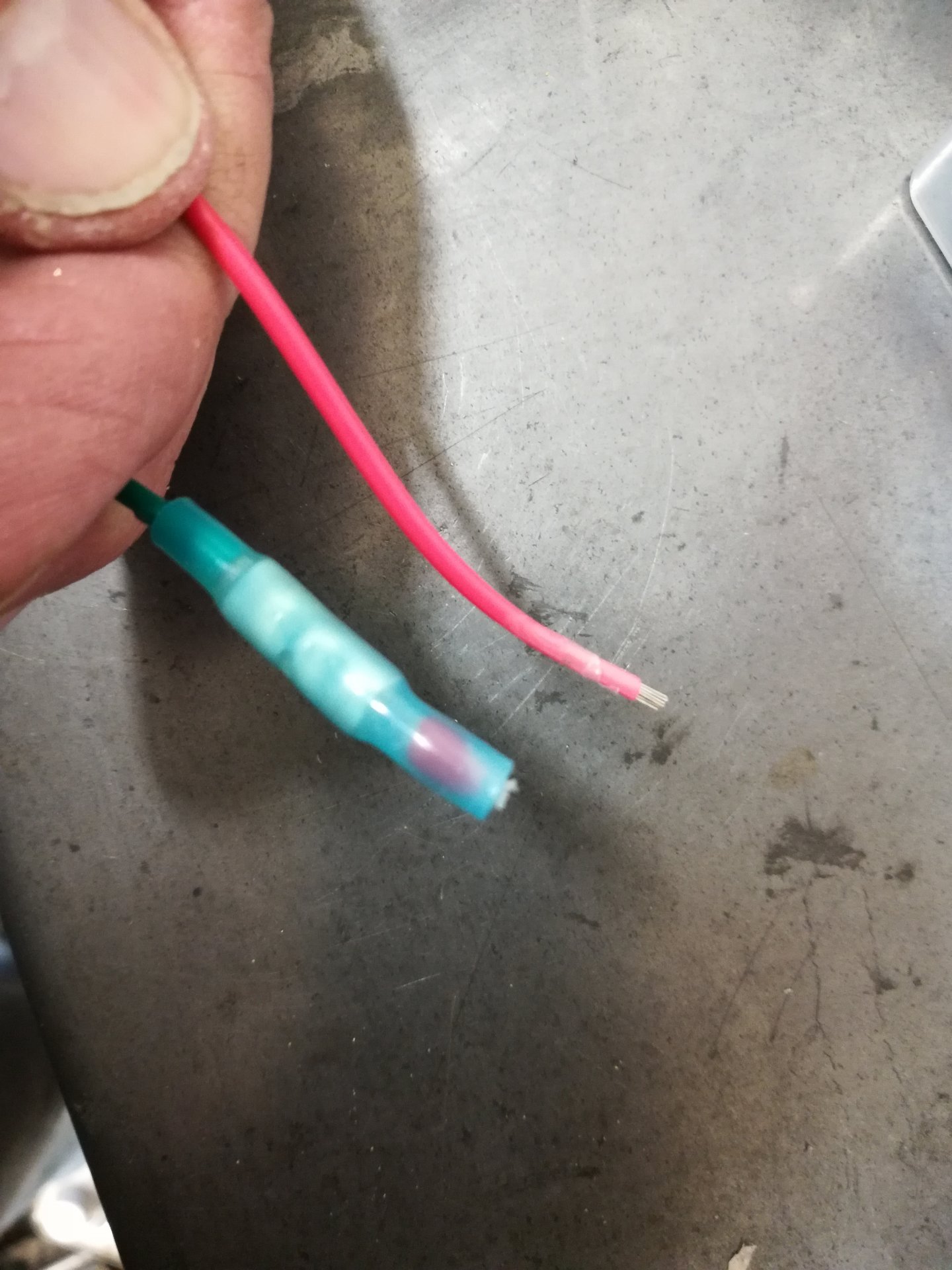 I wasn't able to break the heat shrink ones with as much force as I was willing to apply with my bare hands. 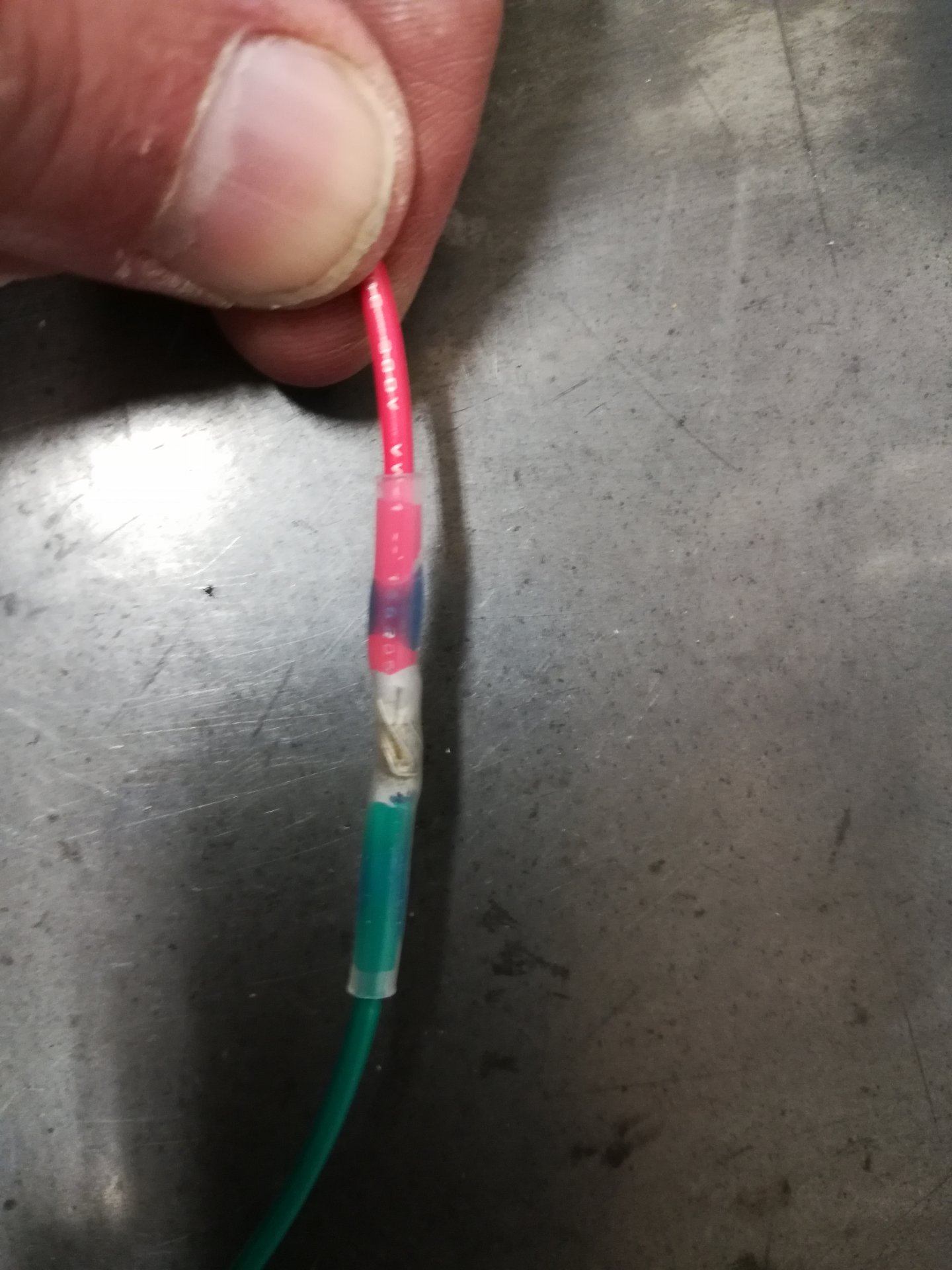 I guess I'm still a little concerned about the wire getting hot and compromising the connection. But with a melting point of 280F, I suspect you'll have bigger problems if things are getting that hot.

Thoughts? Anyone else have experience with these?
Last edited: Jun 1, 2020

Never heard of the stuff but seems interesting

I've seen the ads for these things before. I haven't tried them before but it looks pretty legit to me.

That’s awesome. Seems way easier too. I’ve seen ads for these, but was skeptical about the low temp solder. Thanks for testing them- I’m not so skeptical anymore.

Invested in a crimper and made up the low side AC hose today. 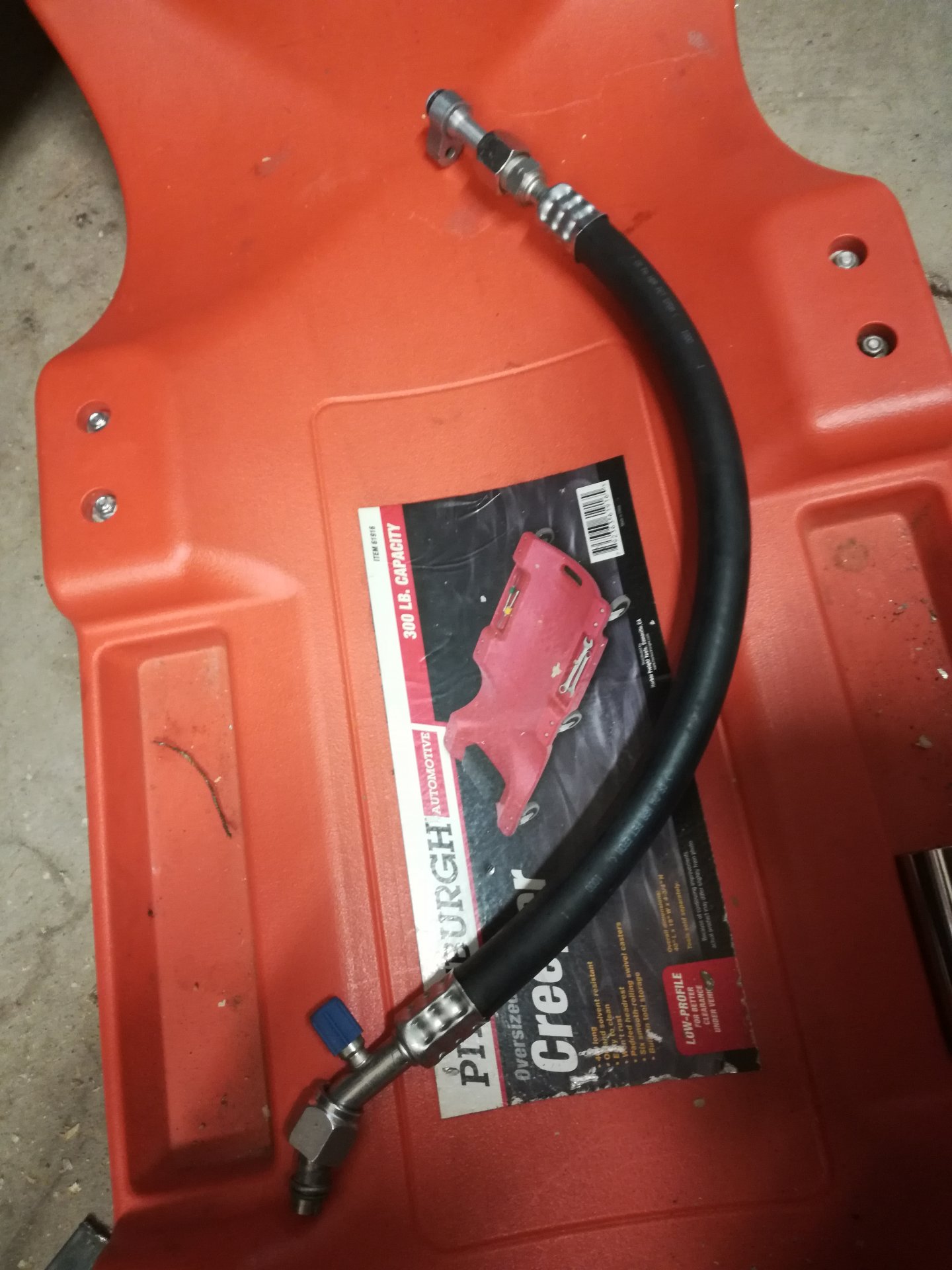 So I've been struggling to figure out the accelerator pedal to TAC module wiring harness. I'm using a new C6 corvette pedal, which has the same number of sensors & harness wires as the donor vehicle, but a different plug. The donor pedal is this plastic monstrosity, with no hope of modifying to fit, while the Corvette pedal has a steel shaft that you can cut & weld ... maybe.

I've found contradictory information and wiring diagrams on the net, so yesterday I finally found a bench test procedure (Part 1 -How to Test the GM Accelerator Pedal Position (APP) Sensor 1) and used that to resolve the confusion - I know definitively which pins do what now.

But - according to the bench test process, the sensor is bad. Should register 5K ohms with the pedal in the default position, and 3K ohms when depressed all the way. Mine reads 1.95K ohms and 1.1K ohms respectively. The seconds sensor reads a similar range, but different values.

So I'm wondering if welding on this thing FUBAR'd the sensors? It's just a pair of potentiometers, so I wouldn't think they'd be to sensitive. And it still seem to respond smoothly - just not according to the expected values. Weird.

Given the amount of apparently incorrect info I've found in researching the wiring diagrams for this thing, I'm wondering if the test procedure has the wrong values? I've ordered another pedal assembly ($80 - ugh) so I can test a new, unmolested example. If it reads correctly, I'll have to figure out a way to modify it without cooking another sensor. If it reads the same, I'll return it and move on.
Last edited: Jun 1, 2020

The fun and not so fun issues of a swap...

Well, I got access to a definitive source for wiring diagrams, component tests, etc.

The sensor test is very different from the one linked above. You hook a regulated 5V power supply to the high reference, and measure the voltage on the signal pin.

So that seems to be fscked up.

New pedal should be here tomorrow. We'll see how that one reads.
Last edited: Jun 5, 2020

So got the new pedal yesterday. It tests identical to the old one - like within +-0.02V. So I guess my conclusion is that the values in the component test are wrong. Or I'm somehow doing the test wrong ... which is hard to imagine, as there's not much to it: 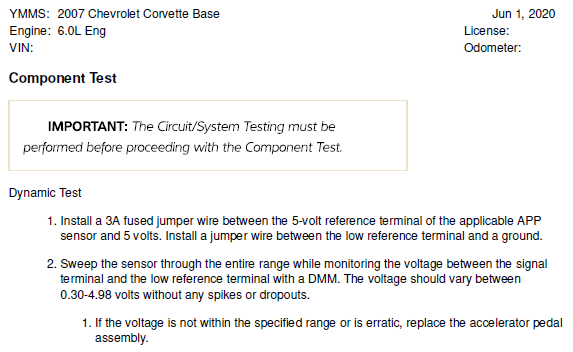 I just installed my rear hub seal in backwards... Wish I could help you man.

Got some stuff done this weekend. Gas pedal harness is done & plugged in. Fixed the power steering return line - it seemed to be in a good place until I jacked the transmission back to level, then it was pinched badly. Adjusted the high pressure line routing as well. This swap is damn tight between the frame rails. 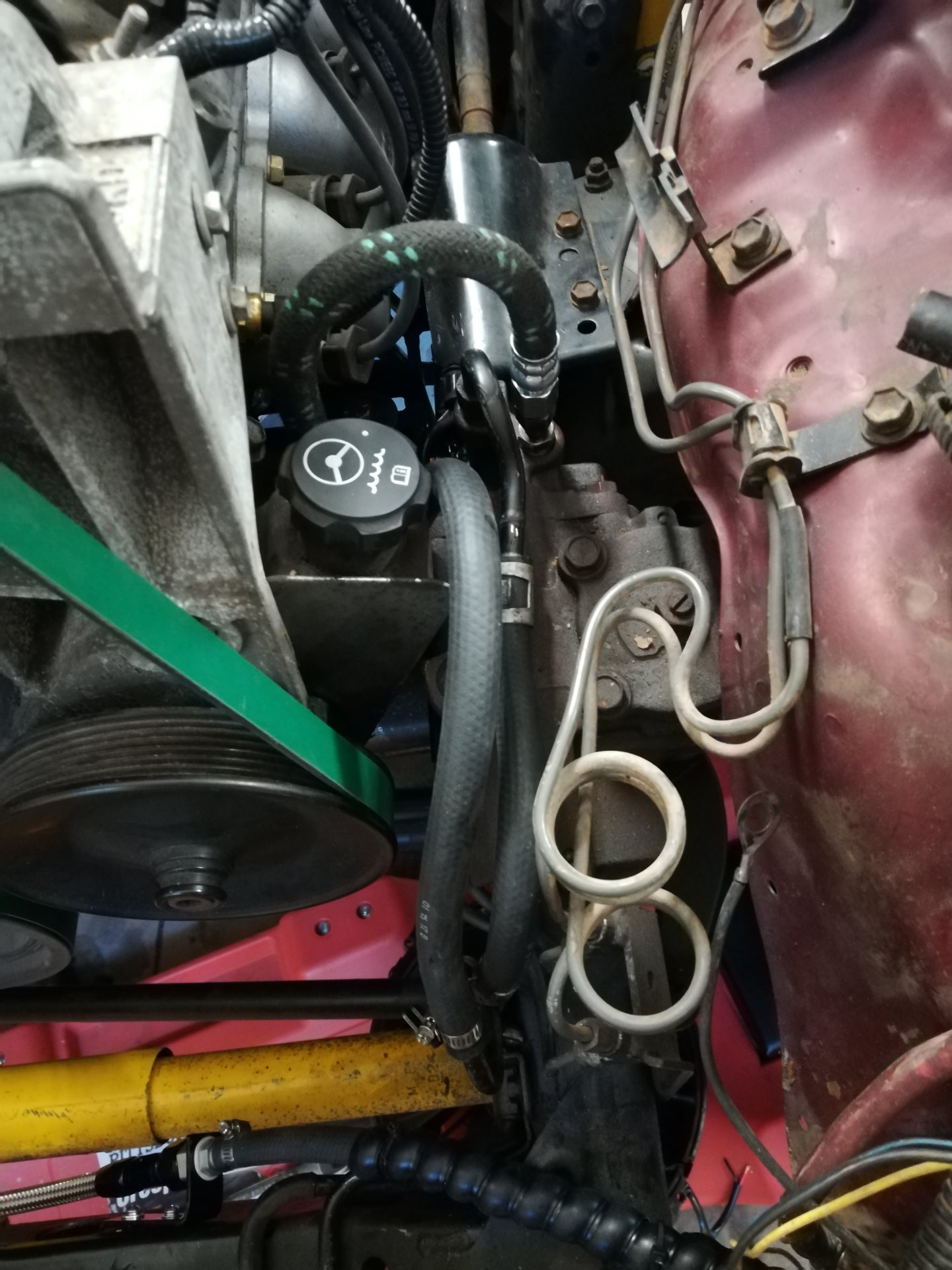 Made up the high side AC line, flushed both lines and installed them. Not sure I'm happy with the routing of the low side line, but wrapped it with some hose protector and it should be good.

Got to work on mounting the Derale electric fan to the radiator - it fits amazingly well. Will finish bolting it up once I get some 12ga wire and decide which side to bring them out on. Ordered a fuse block and some relays for that today as well. Amazon is loving this project. 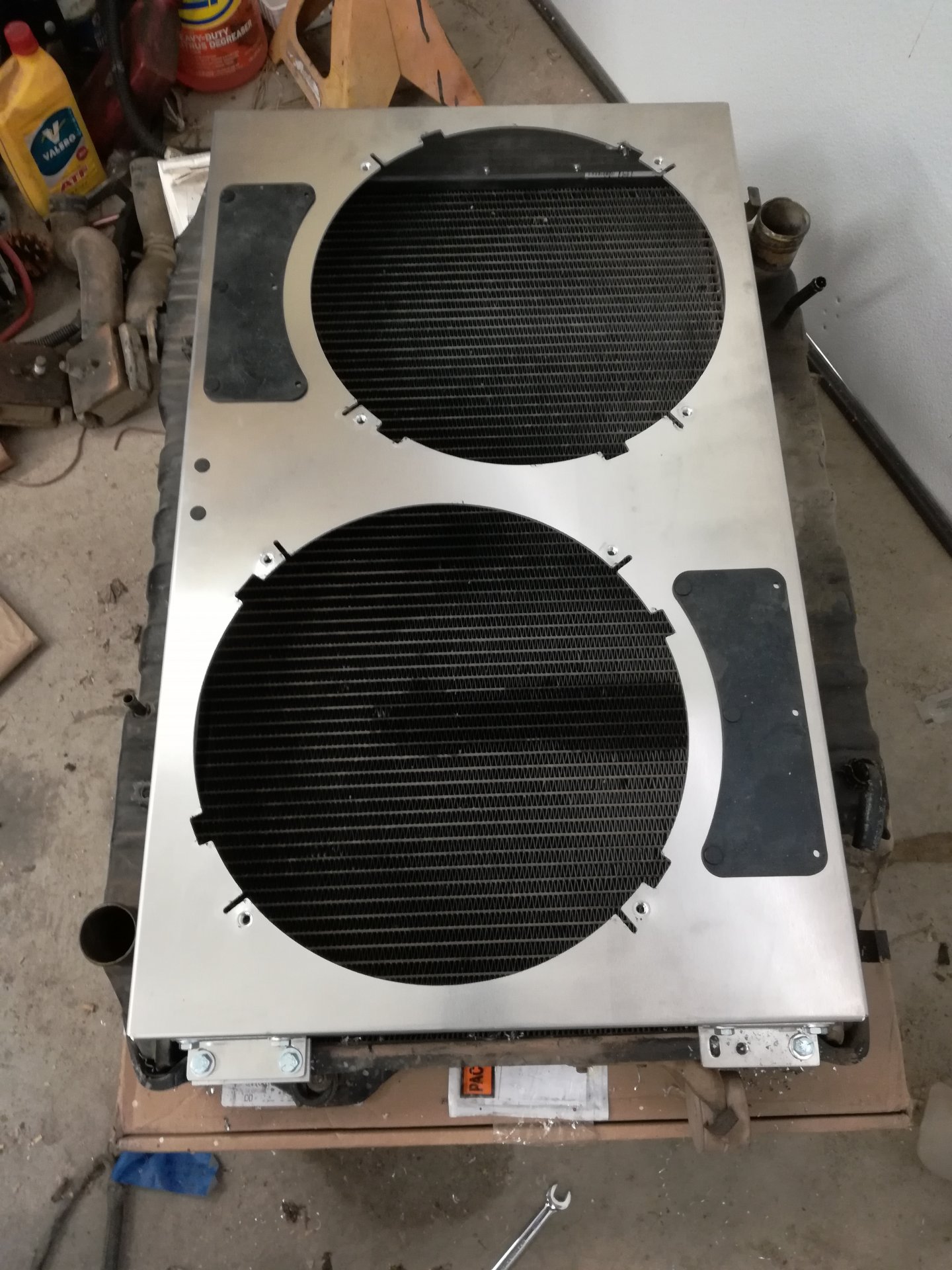 Also finished some brake work. I've had some strange brake issues for awhile - kind of a loss of pressure when nose up and steep. The LSPV was leaking very slightly, and was debating replacing or deleting it. Well, while putting the engine into the bay, I managed to pinch & damage a brake line along the frame rail. Turns out there are two lines to the LSPV - the actual pressure line, and some sort of reference line. It was the reference line that was damaged. Same line that failed on I70 a few years ago. So delete it is! Which was a PITA. Everything was rusted solid despite soaking it with penetrating oil for days. Some bolts are pretty much inaccessible with the fuel tank installed. So I removed a few bolts, broke a few bolts and took the rest of the bracket off with the angle grinder. Then made up some new lines and put in a manual proportioning valve - though many say they've done fine without one - and called it a day. 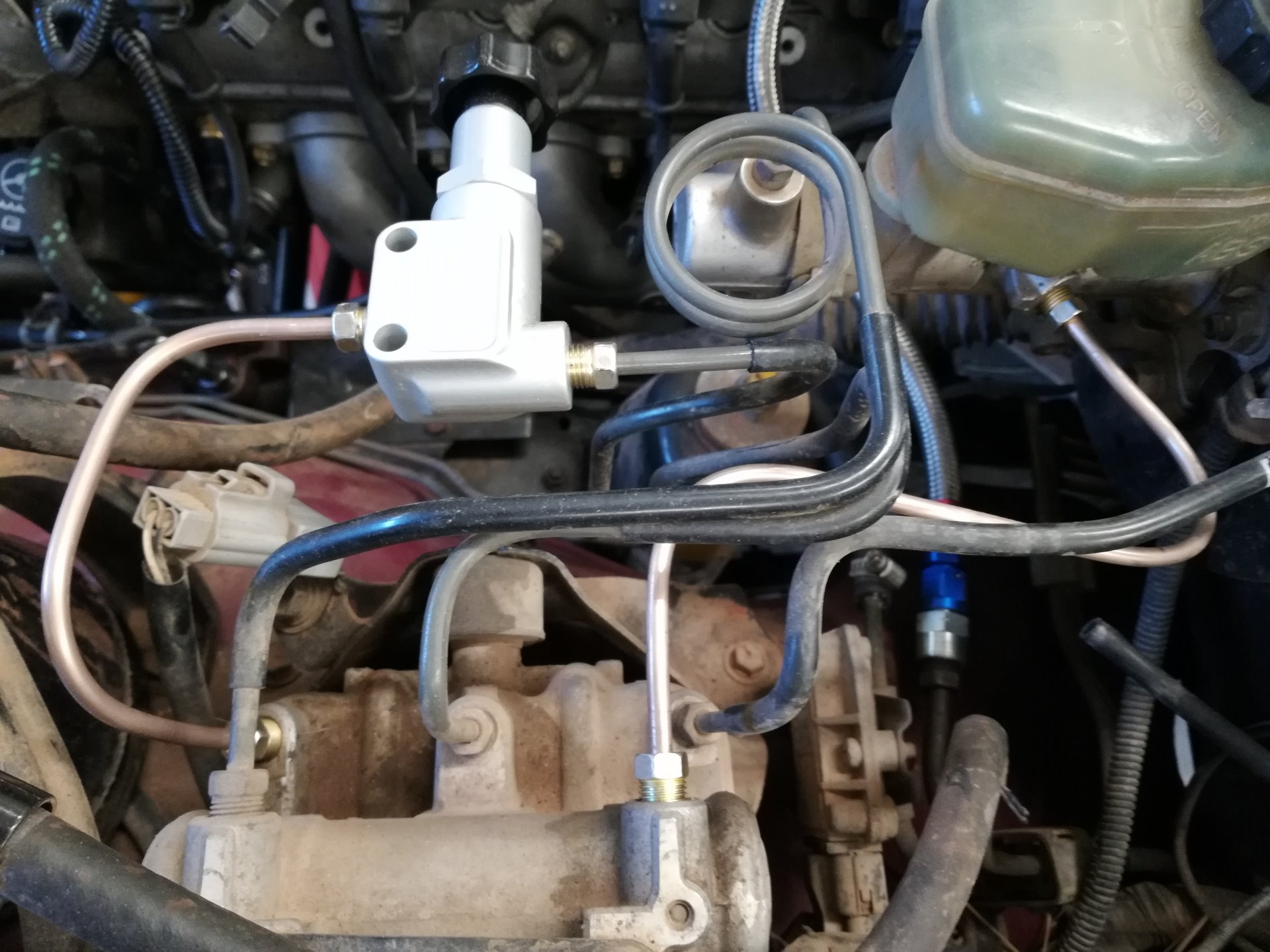 At this point I've opened up every fluid system on the vehicle except the differentials. Thinking of starting a pool on the number of leaks found once it's running.

Got much of the front end put together today. 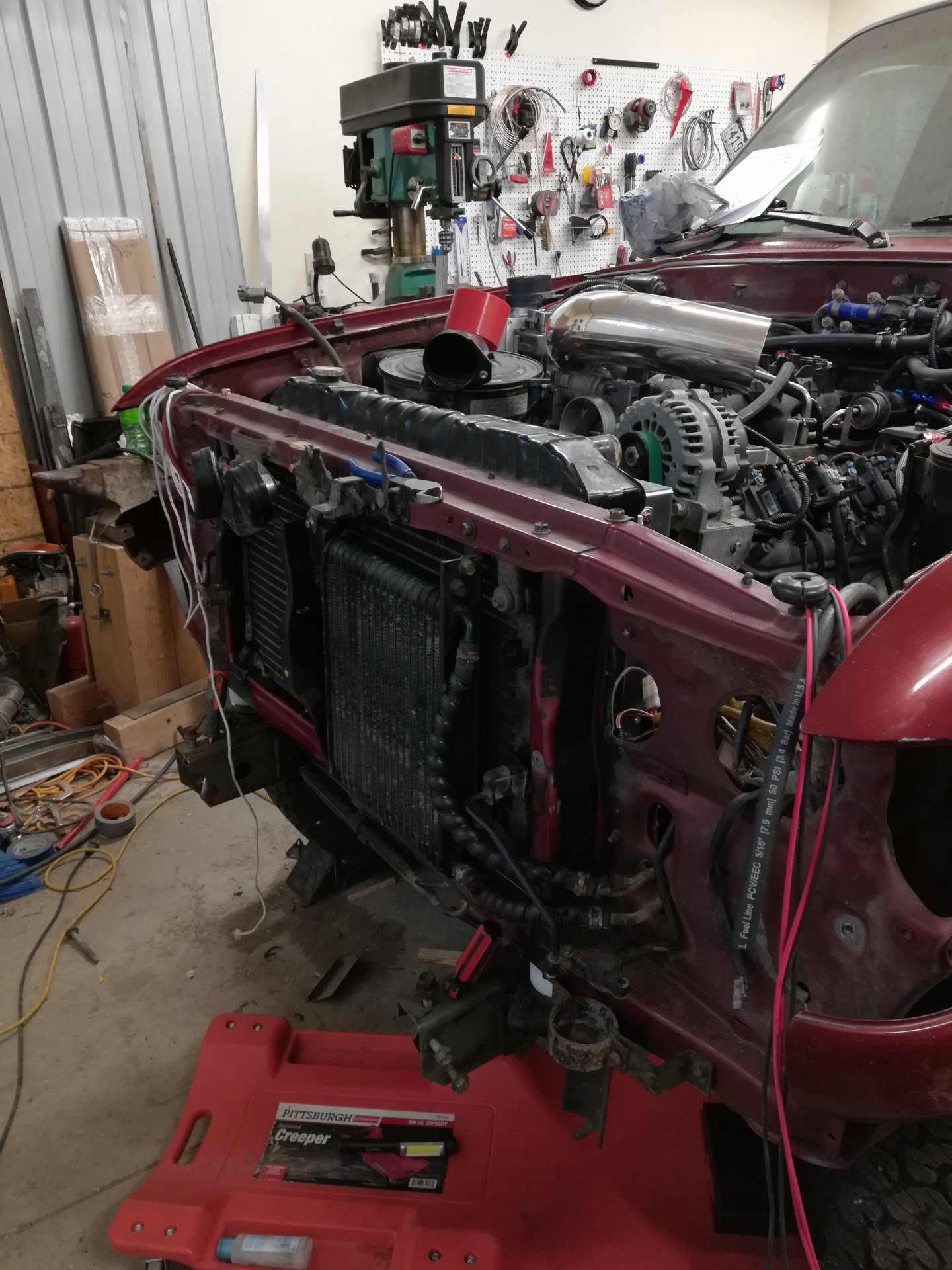 Had some hassle with the fan - another guy in the 80 series swap thread talked about using this fan. And it does fit the radiator nearly perfectly. But on my rig it interferes with the brake lines at the bottom DS corner. Hated to do it, but I chopped out the corner to make it fit. 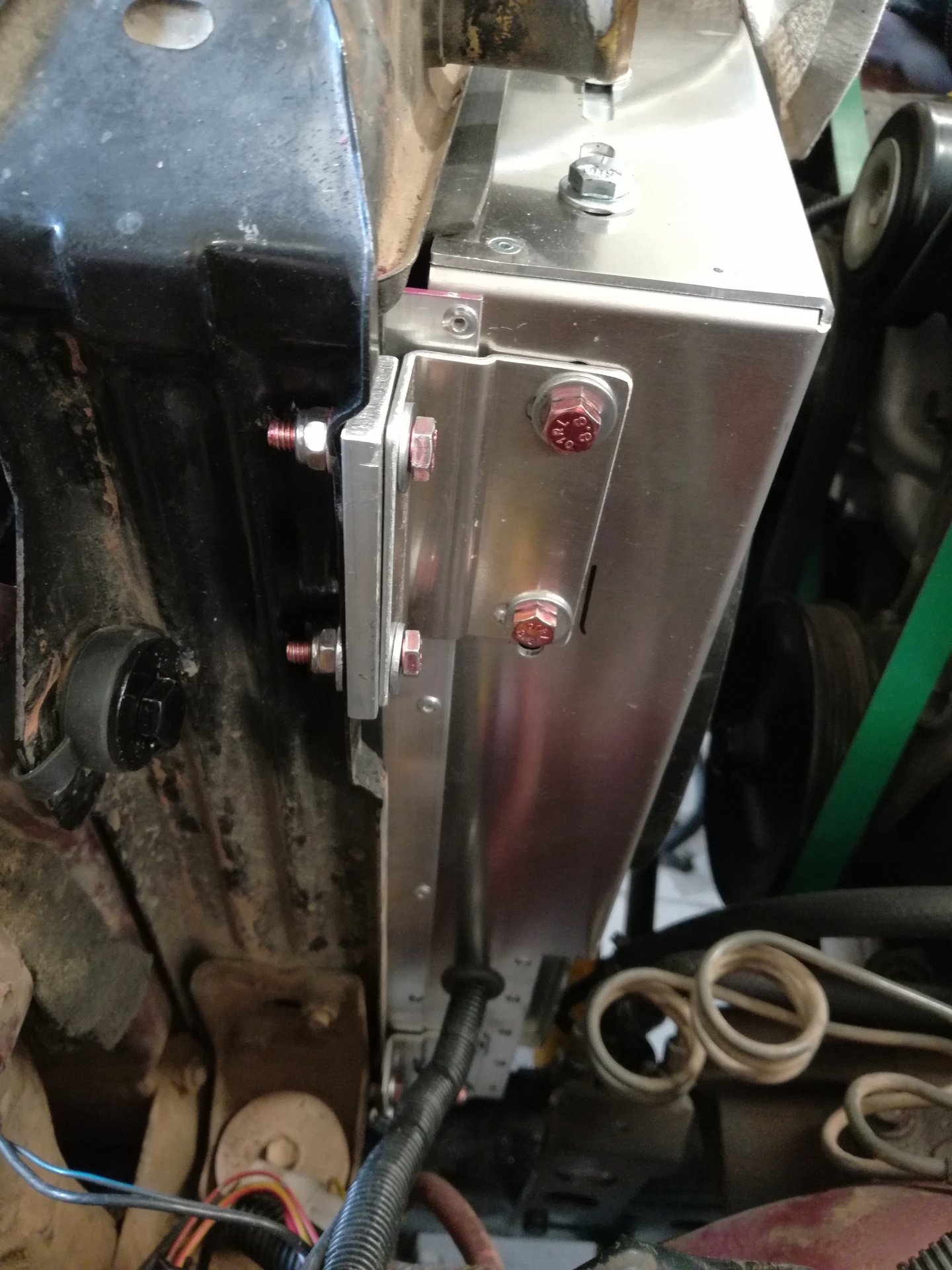 Flushed the condenser and almost got the AC system closed today, but they switched the drier mid-year in 93, and I got the wrong one. 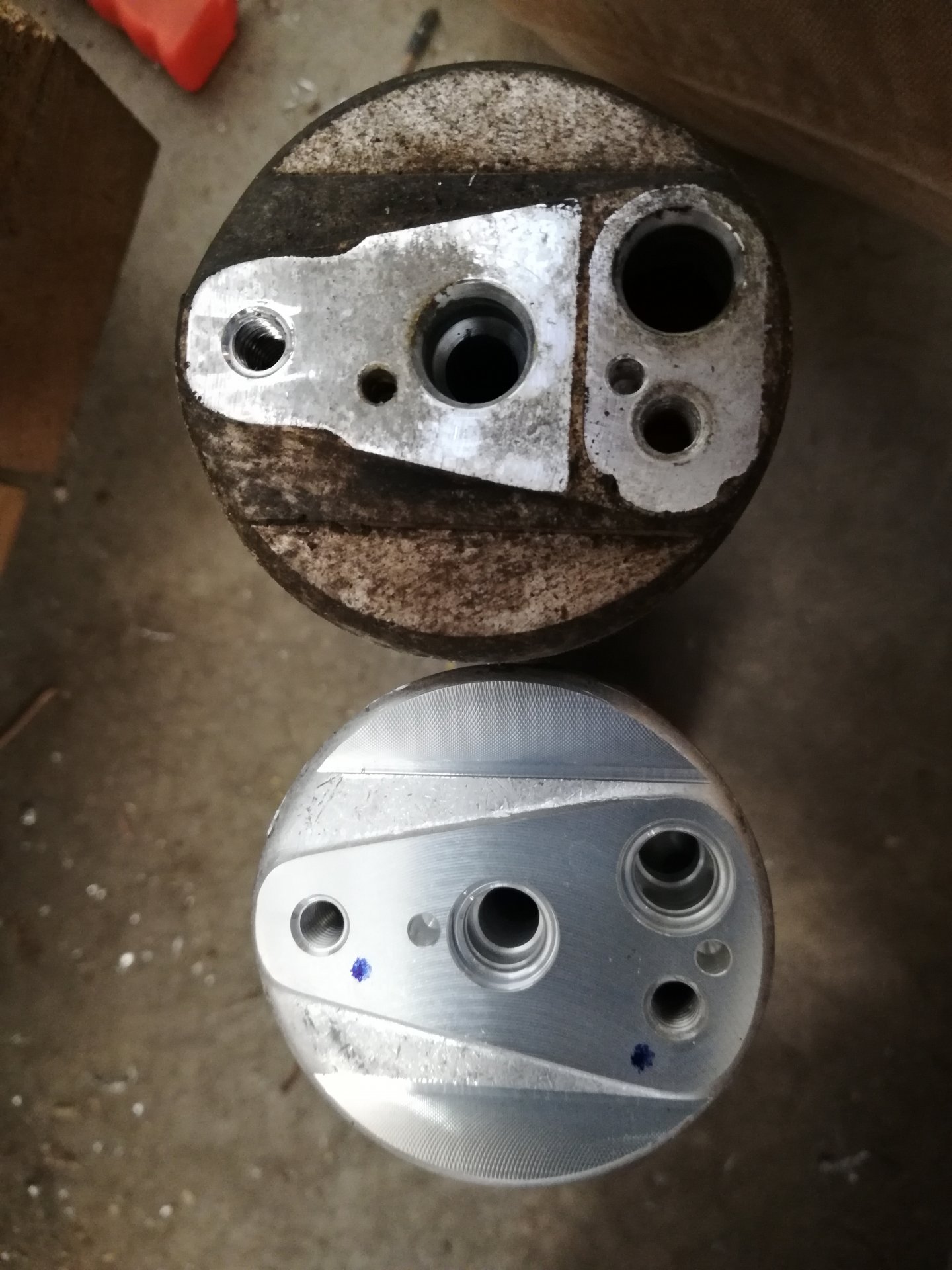 Gotta get serious on the wiring now.

Spent the whole weekend on the greasy, sticky LC wiring harness. Well other then yesterday afternoon which I spent fixing my daughter's brakes - hopefully she tells me about the squeaking before it turns into grinding next time. Trying to keep 5 vehicles roadworthy is sometimes a full time job in itself.

Anyway, figuring out how to read wiring diagrams, which bits to keep, which to cut out, de-pin, etc. Lots of notes and labels for when I try to get all this stuff to work together again. So glad I invested in the aftermarket harness for the LS side of things.

And that whole bundle of de-pinning tools are going in the back of a drawer somewhere. Very little success with them, and took forever. What works great for me is a set of Harbor Freight dental picks. Just reach in, pull the tab down, and slide it out. 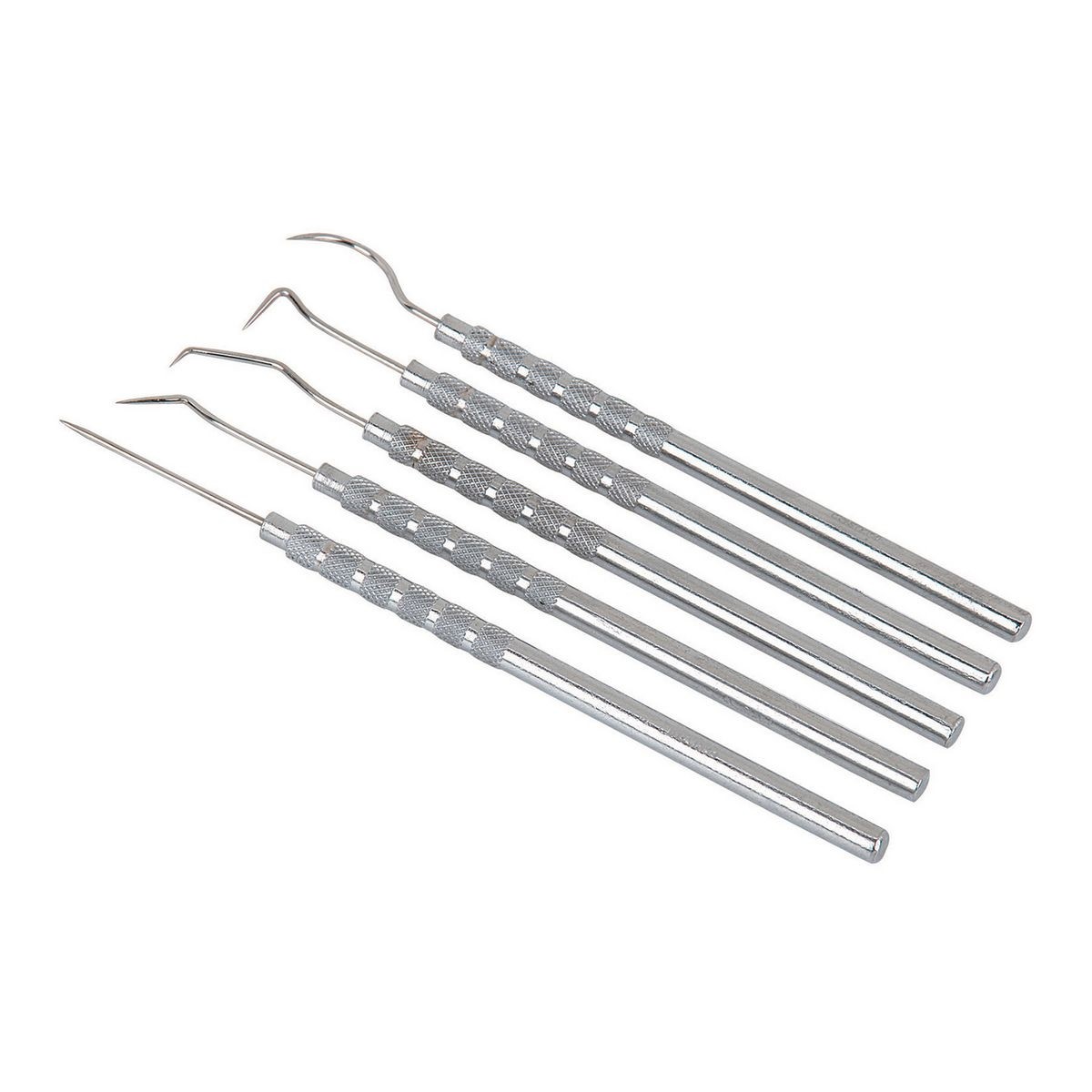