I drove my family and inlaws around Kansas City today and upon heading back home something went awry with my '94 80. After about 15 miles of freeway driving I took an exit and began to slow down. Before coming to a stop it bucked and jerked while making a metallic scraping noise, and rather violently came to a halt while still running and staying in gear. It wouldn't budge.

At this point I was partway in the intersection so I attempted to move the vehicle to a safer spot further down the road. Fortunately, It moved freely and without drama... for a short while. Twenty feet down the road the front right made a thumping noise followed by a few loud, metallic grinding noises accompanied with violent, jerking braking motions. Again, the vehicle wouldn't move in drive, reverse, tranny in neutral, transfer case in neutral, you name it. Fxxx.

I crawled underneath and began an inspection clouded by frustration over what had just happened, and that my father-in-law/GM Master Tech was looming over my shoulder undoubtedly thinking this wouldn't have happened in his Tahoe or either of his Impalas. The first place my mind went is that something went wrong during my front axle rebuild about 1,000 miles ago and was just now rearing it's ugly head. There were no worrisome noises and everything looked dry. The front pinion seal leaks, but not nearly enough to have drained the diff dry. 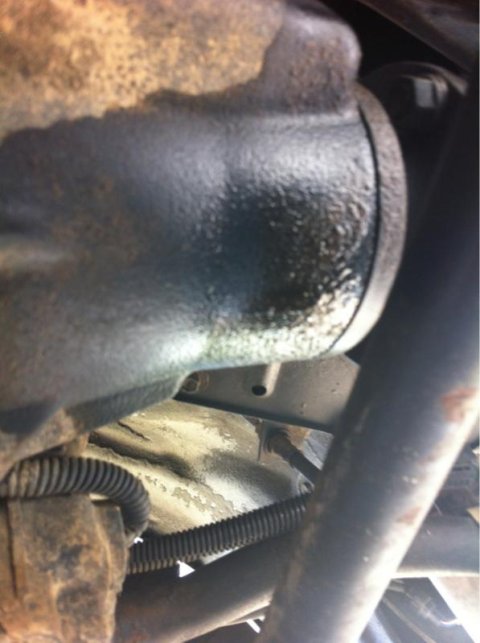 Moments later, my dad showed up and tried moving it (against my wishes). It first moved freely but lurched to a stop a few yards later. The tow truck came a few minutes after that. I was watching his every move like a hawk. Surprisingly, it rolled on the flatbed without drama.

My dad and I followed the 80 and tow truck driver to my local Toyota dealer. After settling with the driver and talking about the 6.7 Cummins in his truck, I crawled back under my cruiser for a closer look.

I spotted it! The bottom caliper bolt had fallen out of the front, passenger side caliper, causing it to swing up and lodge against the inside of the wheel. I have a fairly deep gouge inside the wheel. This occurrence is frustrating as I torqued the caliper bolts to factory specs when wrapping up the front axle job. Grrr...

ANYWAY... What is super strange is another symptom that came up after I first came to a stop, before the tow truck came - before my family and I even exited the vehicle on the side of the road.

The motor began to idle rough and eventually the check engine light illuminated. Anything above idle is butter smooth. The symptoms were still there after coming off the tow truck at the dealer. It starts as it usually would, but settles into what I can best describe as a bad miss. It doesn't hesitate, die, smoke, knock, or smell. Oil pressure and temps are good. I just replaced the plugs PCV valve and hose. The truck ran and drove top notch prior today's incident. I just can't think of anything that would link the engine symptoms with the brake issue.

PS - I'm so fortunate the brake issue didn't occur while traveling 70mph with my one year old daughter... 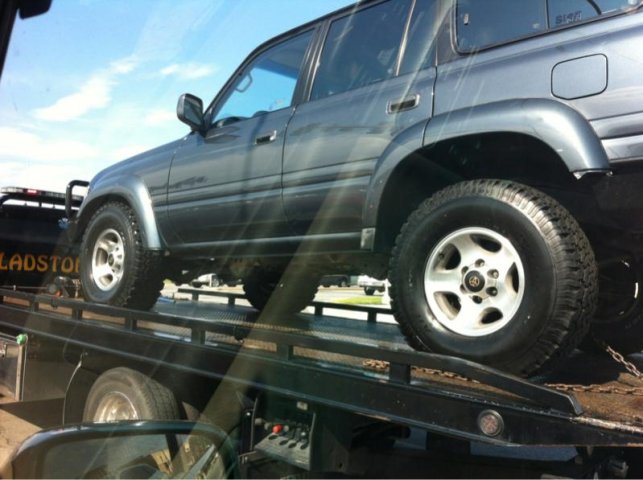 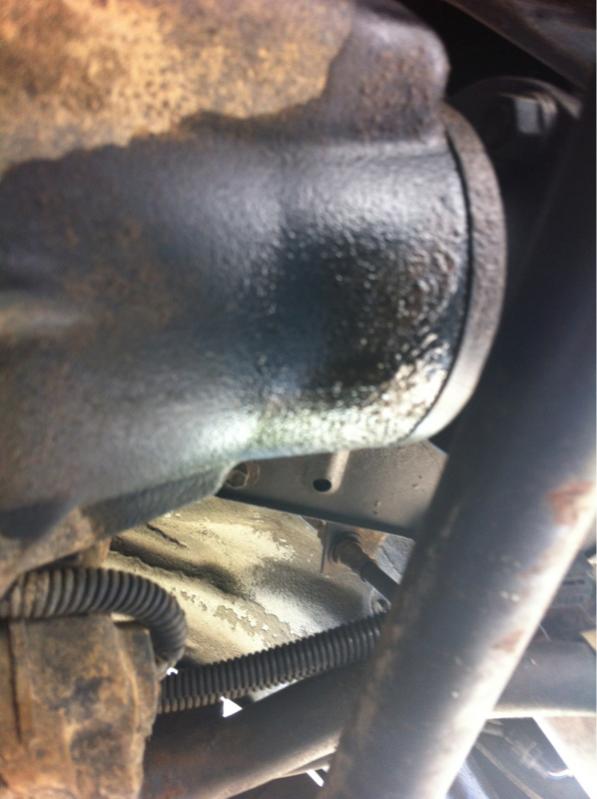 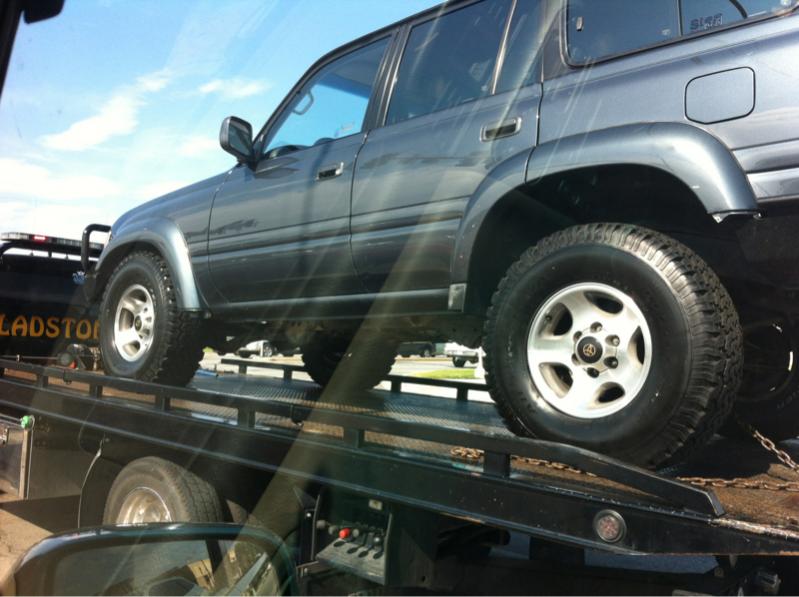 i dont think there related at all. thats my 2 cents on that.

Related. Search there been a couple of incidents recently of the front caliper bolts coming loose after front axle rebuilds.

Uncle Grumpy said:
Related. Search there been a couple of incidents recently of the front caliper bolts coming loose after front axle rebuilds.
Click to expand...

Its a long shot but your O2 sensors aren't far from that wheel, did one of them get taken out by debris ?

Oooooh, I didn't think of that. I'll check when I get up there Tuesday. Thanks.


so much for my reading comprehension...

Uncle Grumpy said:
so much for my reading comprehension...


No worries. I got a little wordy.

Did you use anti-seize on the caliper bolts? If you did, you should probably torque them an extra 5-15 ft lbs to keep them in place. Anti-seize can also have anti-stay-torqued properties because it reduces the friction that would otherwise keep a torqued bolt in place. Not always the case, but I have seen it happen.

I didn't use anti seize or thread locker. It's very possible that I *thought* I torqued it, but didn't. Otherwise, I don't know what happened.

What I'm really baffled about is the engine light that came on at the same time as the brake issue mentioned above. Coincidence or related???
A

likely not related...is your harness melting?


God I hope not. Another good thought... The truck is still up at Toyota as it was closed today. But it was hot yesterday and I was doing a lot of around town driving with the a/c on.

No sense in speculating, until you tell us the CEL code you are getting...

Fair enough. I hope to have that info tomorrow from the dealer. I only have an OBD-II reader. =(

They are torqued to 90 Ft lbs if that matters. Just did a set today.

Stylo07 said:
Fair enough. I hope to have that info tomorrow from the dealer. I only have an OBD-II reader. =(
Click to expand...


Should be able to read your OBD I with a paperclip, I think the info is in the FAQ.
B

Not really related but if it was in bad shape, all that lurching around might have finished it off.

firetruck41 said:
Should be able to read your OBD I with a paperclip, I think the info is in the FAQ.
Click to expand...


Good point. I remember reading about that now that you mention it. I'm wishing I'd had the tow truck drop it off at my house now. But, I don't have the time to mess with it this week. Grr...

Still waiting to hear from the Toyota dealership.
A

could you believe.......that I happened to have a similar issue....lucky for me it was the top bolt on the caliper...only reared its ugly head wheni was backing into a parking space at autozone....too bad they didnt have a bolt for me...

angerhater said:
could you believe.......that I happened to have a similar issue....lucky for me it was the top bolt on the caliper...only reared its ugly head wheni was backing into a parking space at autozone....too bad they didnt have a bolt for me...
Click to expand...


Are you kidding me?! I'm happy for you that it was the top bolt. I still cringe at the thought of what could have happened on the highway at 70 mph.

Had you or someone else performed recent maintenance on the brakes?
You must log in or register to reply here.