First off, these forum's were an immense help in my purchasing decision, managed to get an extremely low milage, well taken care of, "Black on Black" LX570 2011. Love the way the thing drives and looks. Ofcourse I plan to tow some stuff.

How do you get the hitch cover off, I tried prying off the clip the holds it in with a key, but it just bends the plastic tip. Am I doing something stupid? How did everyone else there's off?

Did you see the second part of the graphic?
See below... 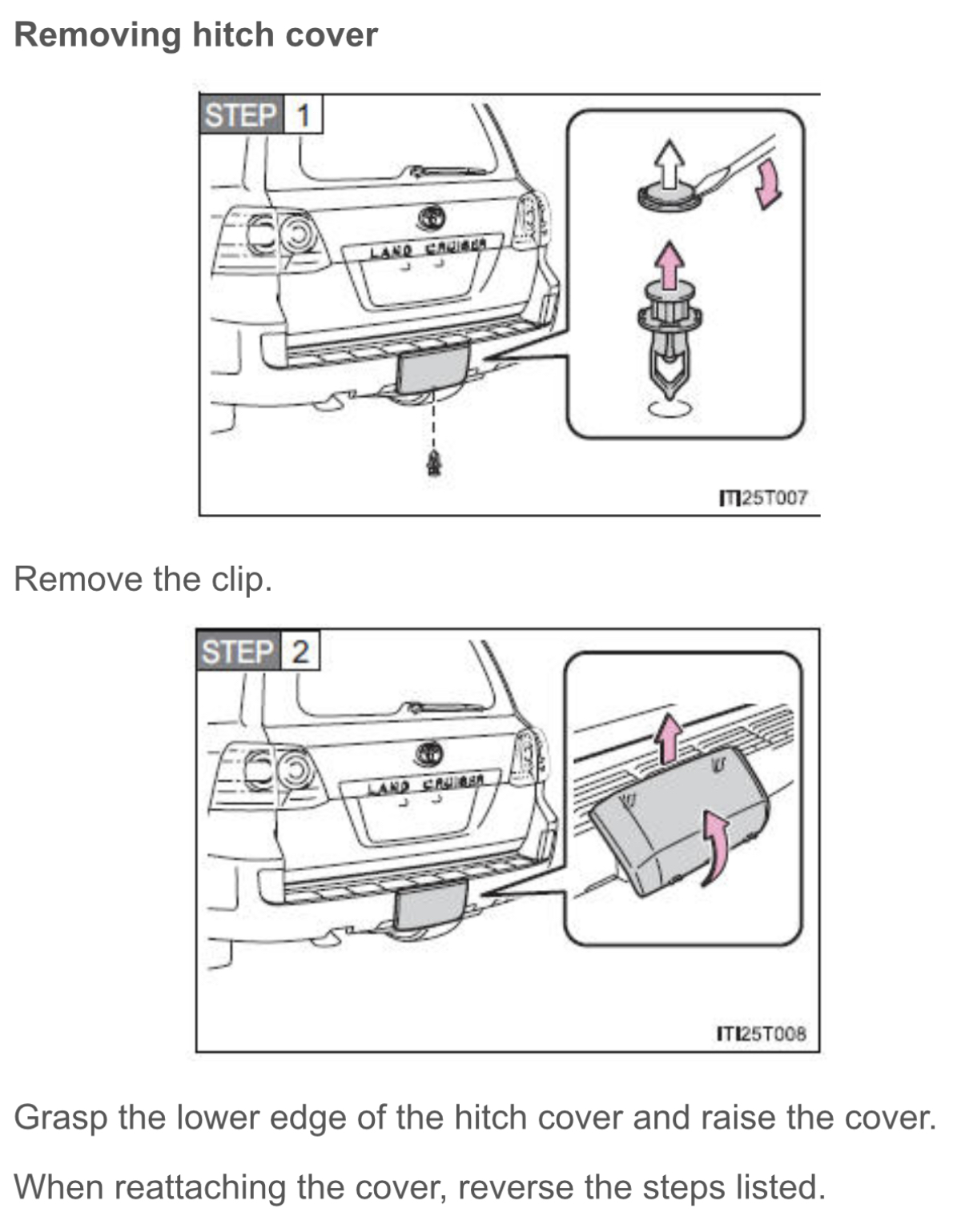 Give it a strong pull from lower edge.

I never bothered to do step 2, because i couldn't get the clip out in the 1st step, all I did was bend the plastic, it never came out like the pic:

What do you use to pry it out like that?

Don’t pry under the whole pin. Just pop up the middle a bit...then pull entire pin.

The middle pin doesn’t need to actually come OUT...just UP enough to allow the lowerpart of the clip to contract so it’s barbs clear the edge and pops out together with the inner pin.

See the top graphic.
A thin screw-driver or knife blade is wedging under the middle “pin” portion of the clip. Not under the outer edge...but the edge of the smaller, inner pin edge.

PS.
It’s not such a dumb question.
You’ve either dealt with these clips...or you haven’t... And until you see it’s structure, it can be confusing...especially since some other clips on your truck require pushing the pin IN to release...and still other clips have no pin at all.

Haha, sounds about right.
Does this look right to you
It's for 2019, but the clip looks the same. I could never get it to come down

I'll give it a go tomorrow, thanks for your help.

AussieInExile said:
Haha, sounds about right.
Does this look right to you
It's for 2019, but the clip looks the same. I could never get it to come down

I'll give it a go tomorrow, thanks for your help.
Click to expand...

The LC cover in the graphic may be a bit different than the cover in your video and on your LX...but the clip function should be the same.

Worst case...pry that sucker out and pick up new clips on Amazon for a cost so little, I marvel they can ship them from China and to your door for profit.

Pry from two opposing sides with normal flat-head screwdrivers. They don’t need to be very small ones, just thin enough to get into the gap. Sometimes the head on small screwdrivers are too narrow to pry the pin all the way out while rotating. It is possible the head will break off, and maybe require drilling. It’s easy to do.

These clips tend to get dirt in them when oriented as yours is, which jams them up. A new one will work effortlessly.

Hit it with a little WD40 while you are in there, makes it slide a lot better.

The best thing I’ve found to remove these is a hook shaped pick I got from a pick set from Lowe’s.
Insert point and pry up using the curve which pushes down on the outer rim.
The one on the right

grinchy said:
The best thing I’ve found to remove these is a hook shaped pick I got from a pick set from Lowe’s.
Insert point and pry up using the curve which pushes down on the outer rim.
The one on the right

I can usually pop them, but I think the pick solution would make it easier.


Not oem Toyota but just as good and you get alot more.

jeproks said:
Not oem Toyota but just as good and you get alot more.


Was going to suggest same/similar.

I highly doubt Toyota makes theirs anyway...although I guess with the Toyota part number, you at least know it will be adequate. That said, I’ve used a ton of genetics from Amazon and they’ve been fine. There are so many different style clips used, even over the same category. When I pulled my wheel well skirting for snorkel install, there were 4 different style clips depending on what they clipped the skirt to. Maybe a rationale for those bigger clip collections like your link.
B

As a new owner ('13 LC), only reason I know is had to replace the hitch cover from Day 1. eBay set me up at reasonable cost.

For those clips, I popped into local dealer, and bought two. Oddly, he had them in stock, indicating I need to patronize them more often for parts, not just service. They were $3.95 each. Splurged with that second one (chuckle).

I put the cover on, including clip, then took it off just for giggles. I'm familiar with those clips from a former Kawasaki motorcycle, they loved them. A decade ago I bought a set of PLASTIC trim-puller tools to do a little work on my 911, so I don't mar anything prying up such clips anymore. Not that you'd see, underneath, is this case but just thought I'd do it right. The trim puller kit is less than $20, it's just a series of plastic levers if you will from 1" to 1/4" or so. To be clear, using metal tools like "screwdrivers" on plastic mars them immediately and permanently. Just a word from the wise: there's probably "a tool for that" if it seems like you're using force or breaking something unnecessarily.

I won't tow often so the cover stays on vast majority of the time at-current.

Forgot to give an update on this. Managed to yank it out with a phillips head screw driver, but f*****k it took a decent amount of effort.


Thanks for tips everyone! I might get some spare clips because I think I've done mine pretty hard.
You must log in or register to reply here.

B
Trail Hitch Towing and Recovery

Thursday at 9:11 AM
grinchy

Tuesday at 9:44 PM
AdmiralSnackbar
A

Pinout for 3 connectors in A-Pillar