Still can’t believe you like those s*** box swampers over KM2s though....

wngrog said:
Still can’t believe you like those s*** box swampers over KM2s though....
Click to expand...

And my Troopy drives like a dream now with the KM2s.

cbmontgo said:
Somethin' about them...

The last week has been a fantastic adventure in this trusty FJ40. 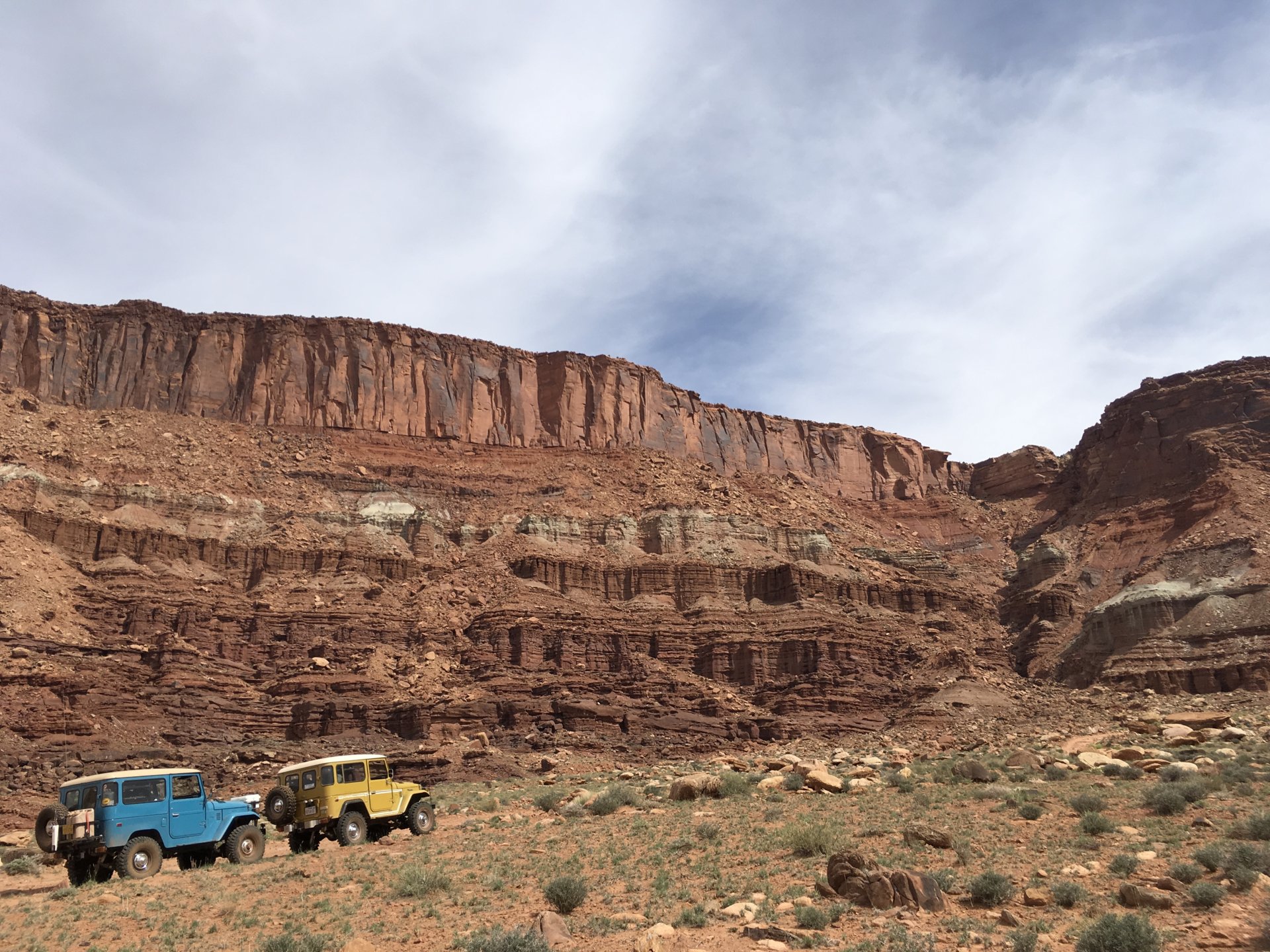 Every year since 2011, I have gone to Southeast Utah to explore. During that time, I've covered all three areas of Canyonlands NP, as well as many BLM miles in the surrounding areas. Of course, it was much easier because I lived in Colorado most of that time.

It was time to take Pikachu out for a serious run.

A couple of months ago, I was able to get firm attendance commitments from one of my best friends from college who lives in Louisiana and two buddies from Colorado. The goal was to trailer the FJ40s to the Durango, CO area and begin a driving journey, starting on U.S. 550 (the Million Dollar Highway) for a restaurant/brewery sightseeing tour and an off-road camping trip across Southwest Colorado and Southeast Utah. We would join one of the Colorado guys in Ouray, CO on Sunday, and the other at Needles Outpost, Utah on Tuesday.

Wes rolled into Dallas from Lafayette on Friday evening and we loaded up. His 1976 is a very nice rig that is originally from Southeast Colorado.

That night, my wife hung with us in the driveway as we stayed up late, tinkering with the FJ40s and sipping gin. We felt a bit rough at departure on Saturday morning, but were excited about the trip ahead. 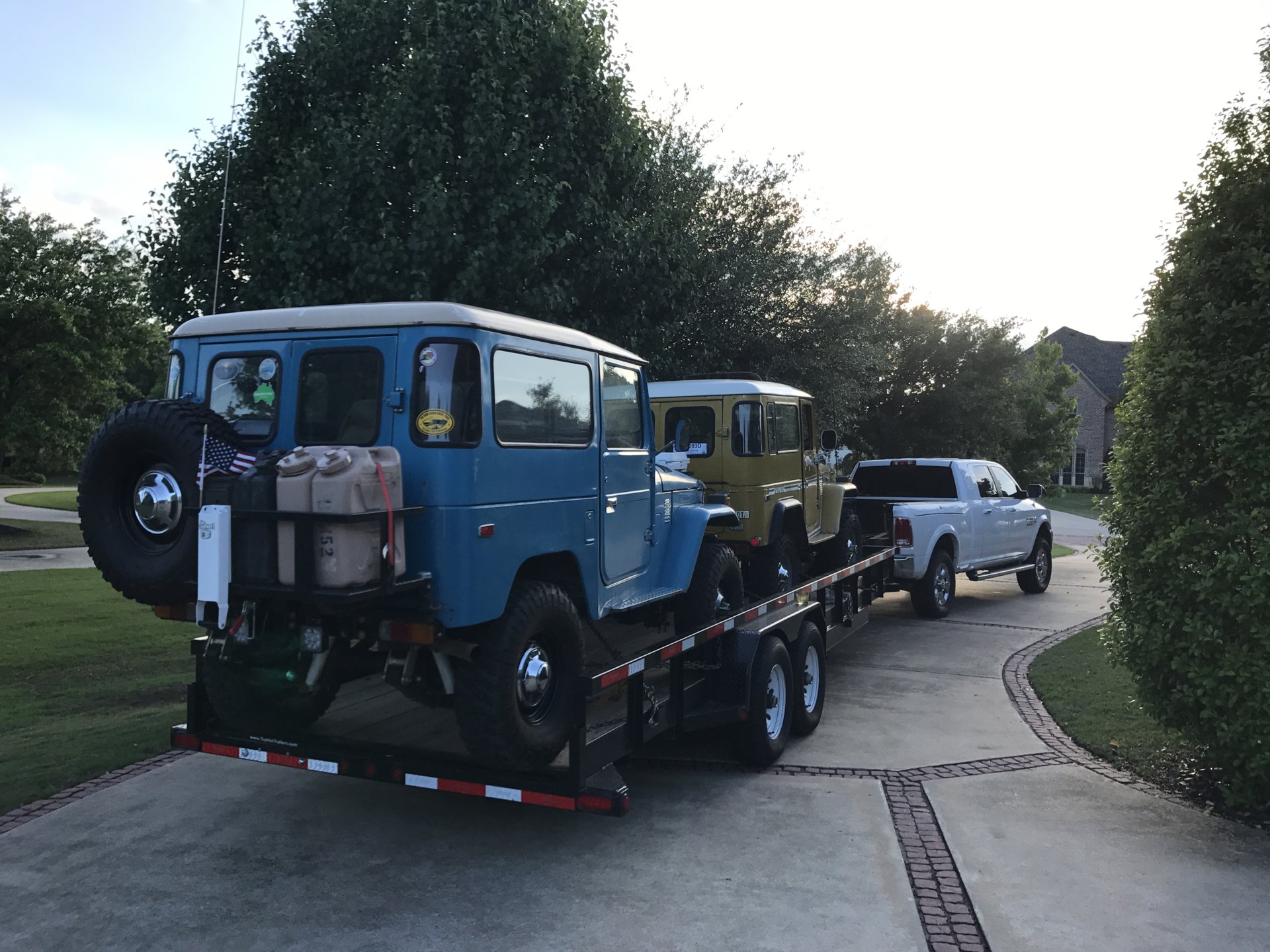 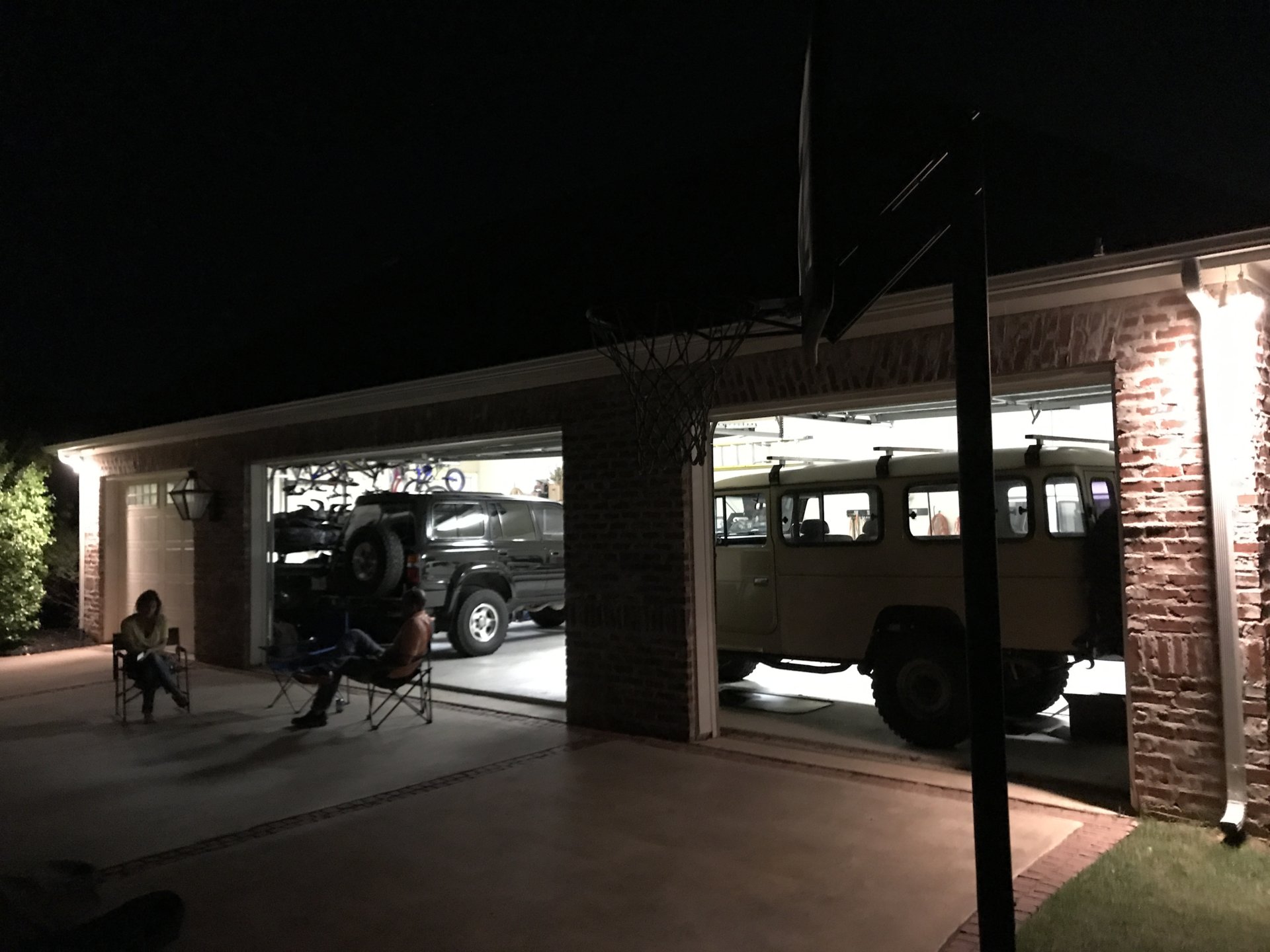 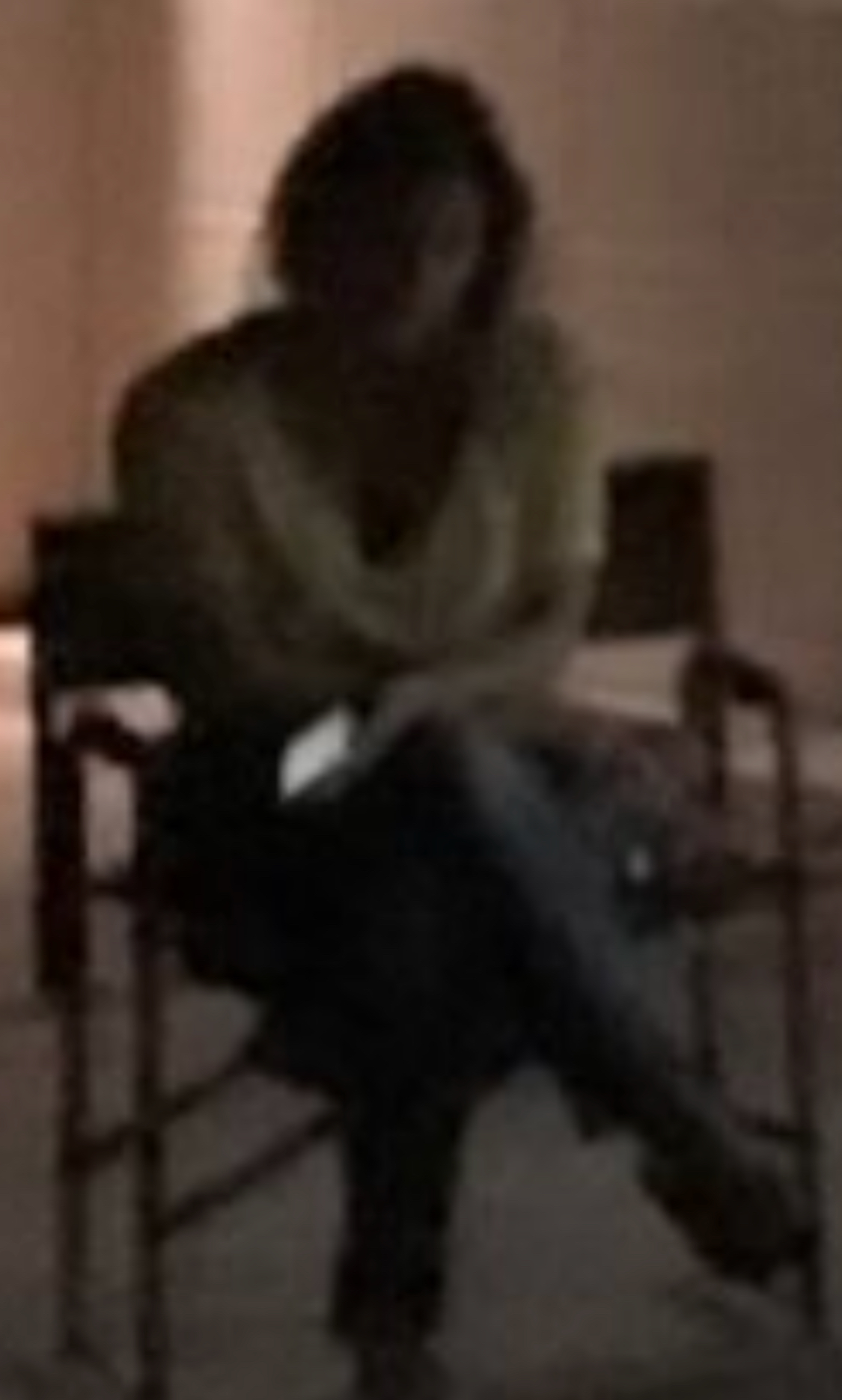 Saturday morning, we headed up Highway 287 and had lunch at a hole in the wall BBQ joint in Vernon, TX. The owner, Wanda, had lived all over and seemed a little out of place here. 1950s Westerns were playing on the tube and it held a general feel of going back in time 30+ years. 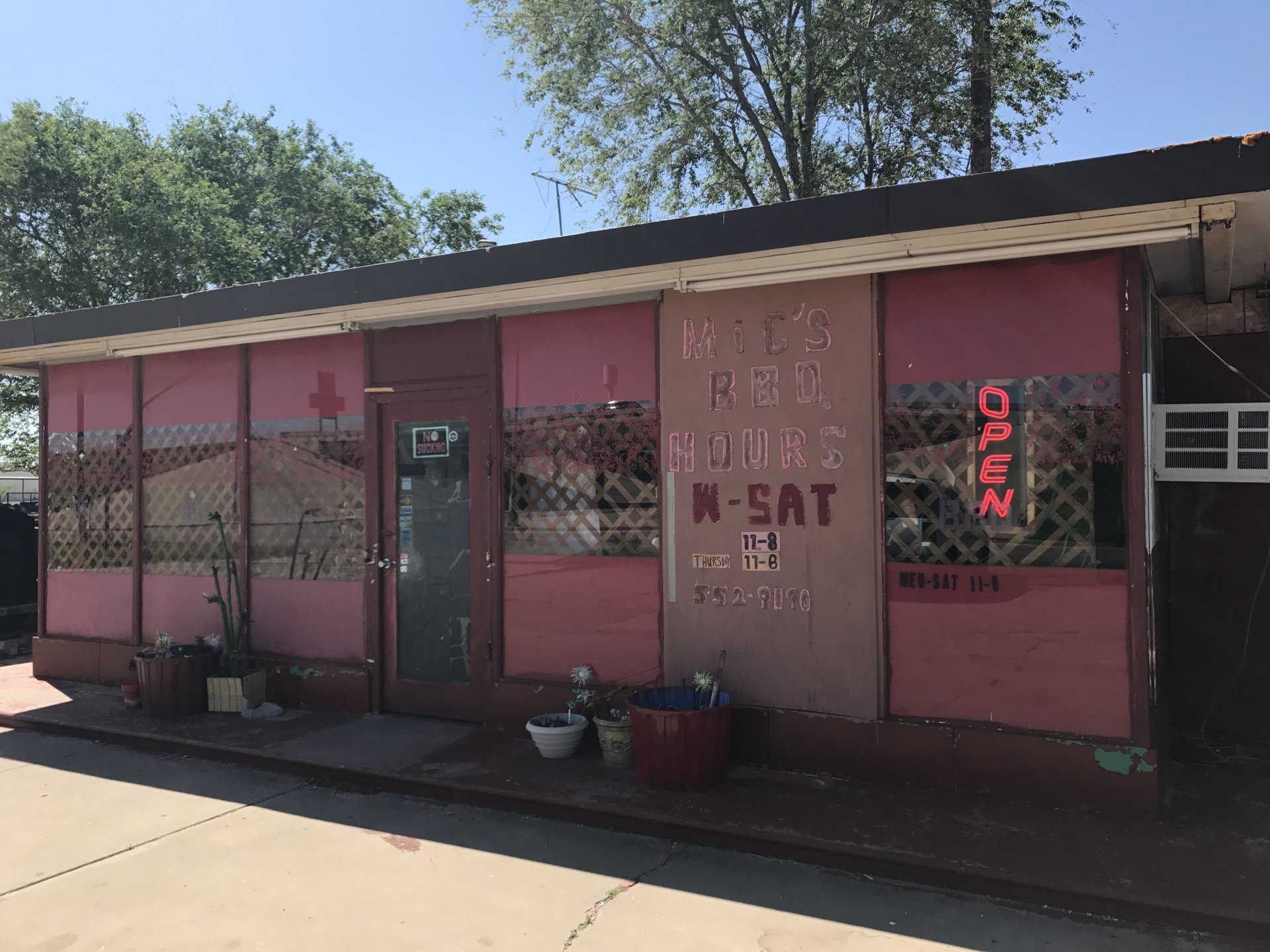 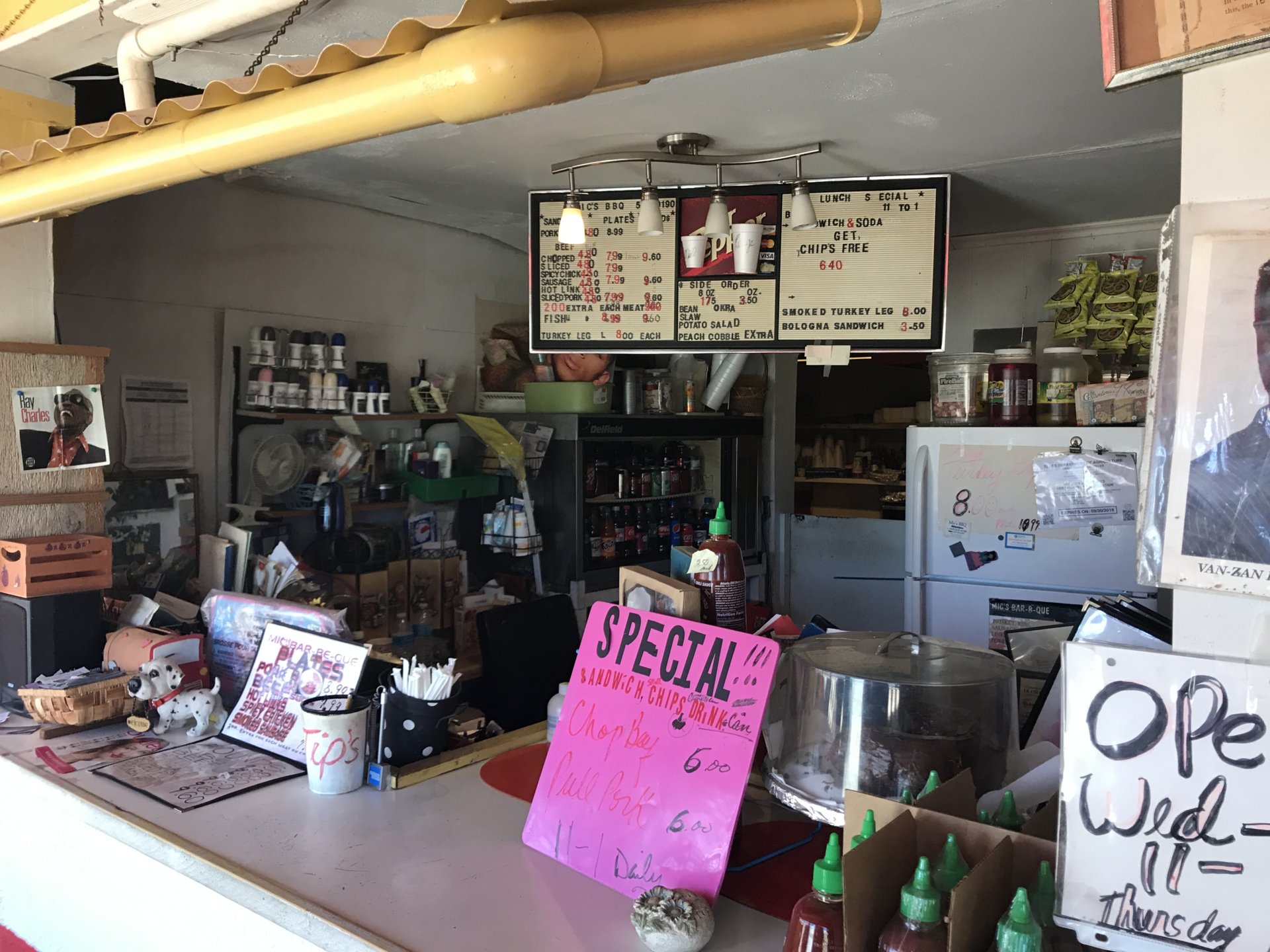 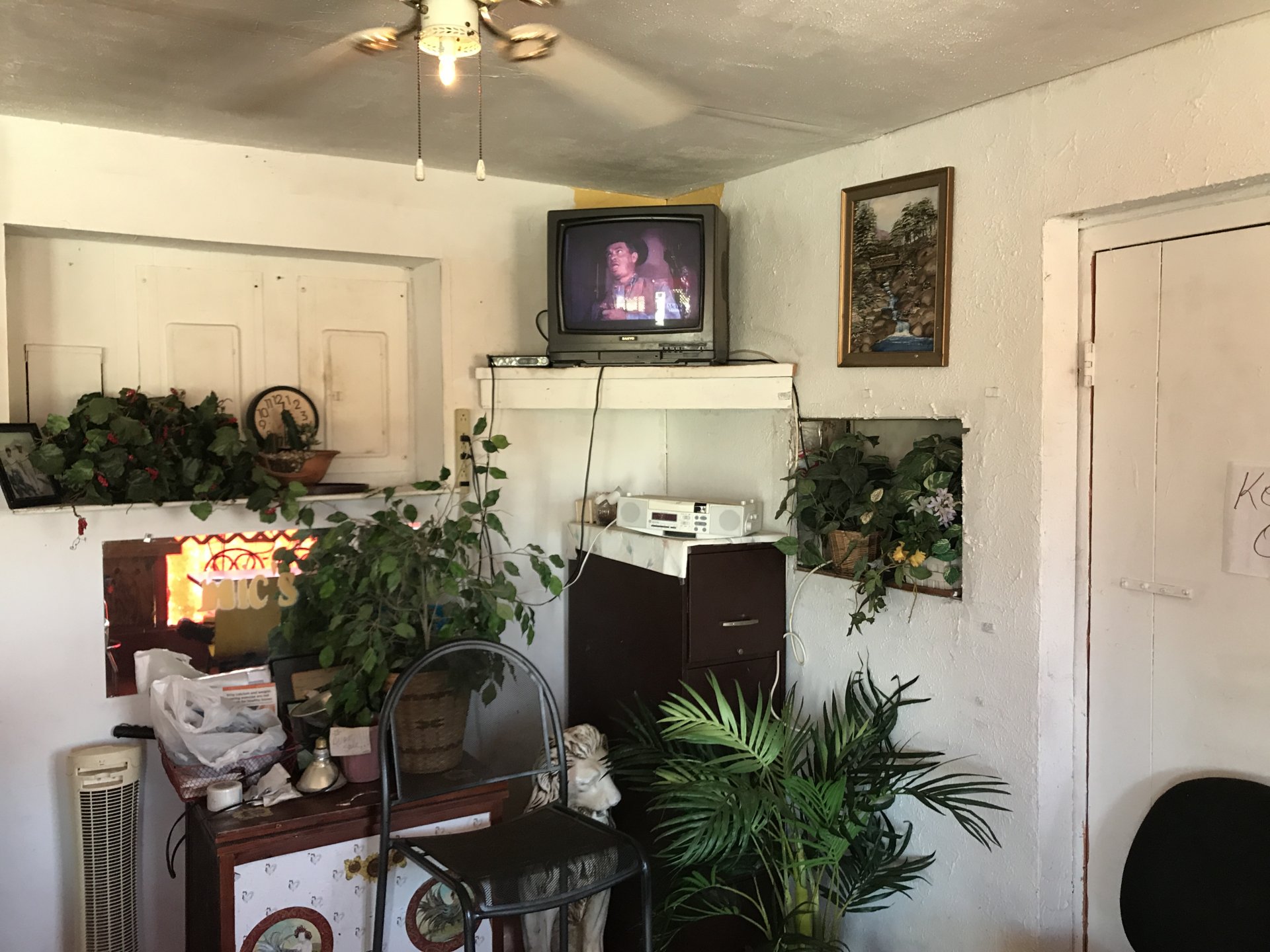 We also took a little detour through Palo Duro Canyon State Park, which is a canyon near Amarillo that pops out of nowhere. It was hot as Hades and we needed to make Albuquerque at a decent hour, so we didn't poke around for long. Very cool place though. 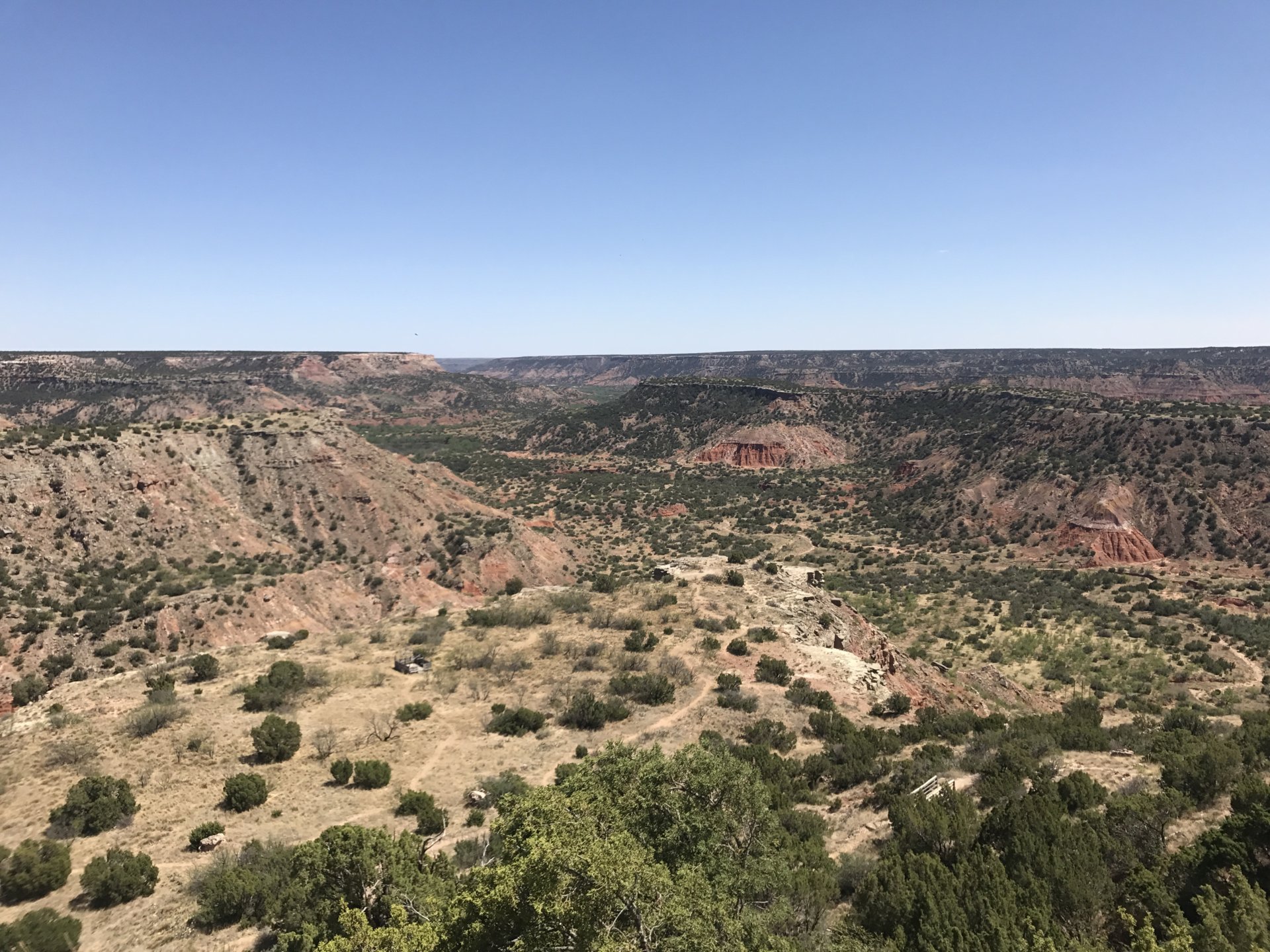 Later, we had dinner at the Silver Moon Café in Santa Rosa, NM along old Route 66. This is such a cool area. I always try to stop somewhere off of I-40 and eat in one of these towns that once thrived on the old Route. I try to imagine crossing the country on the old two-lane highways back then. Must've been a trip.

Anyway, service was slow as hell, but the food was good. 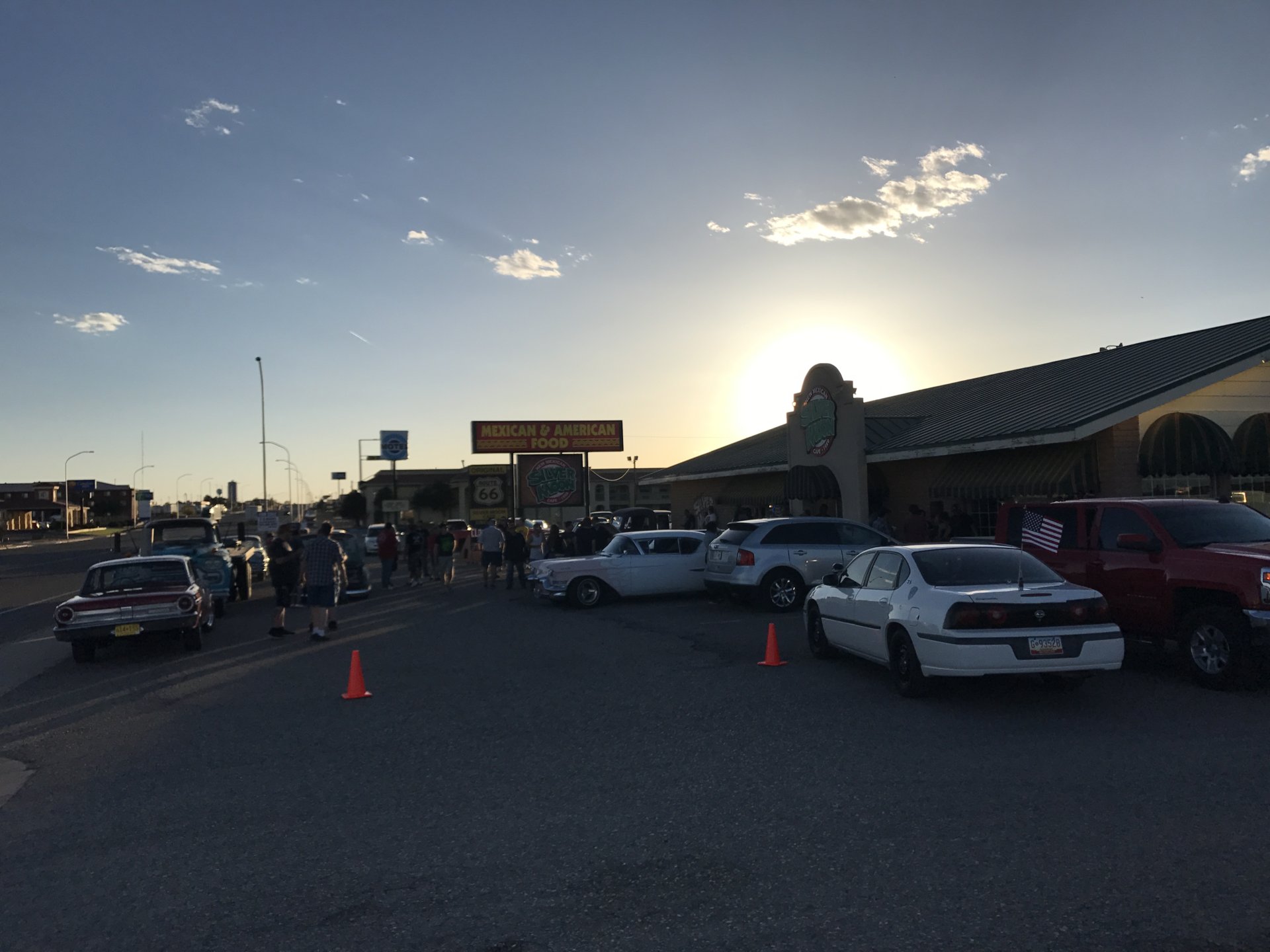 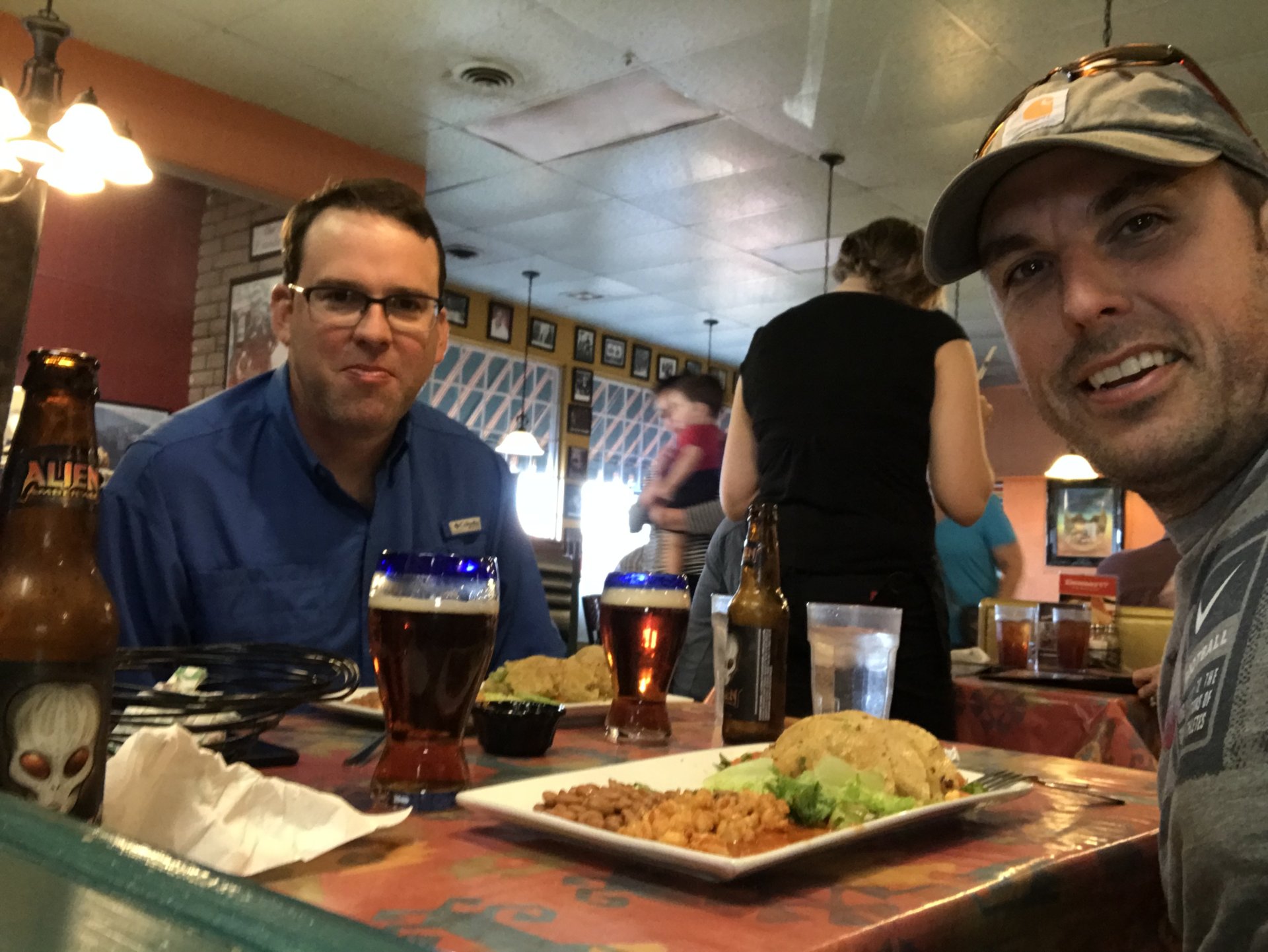 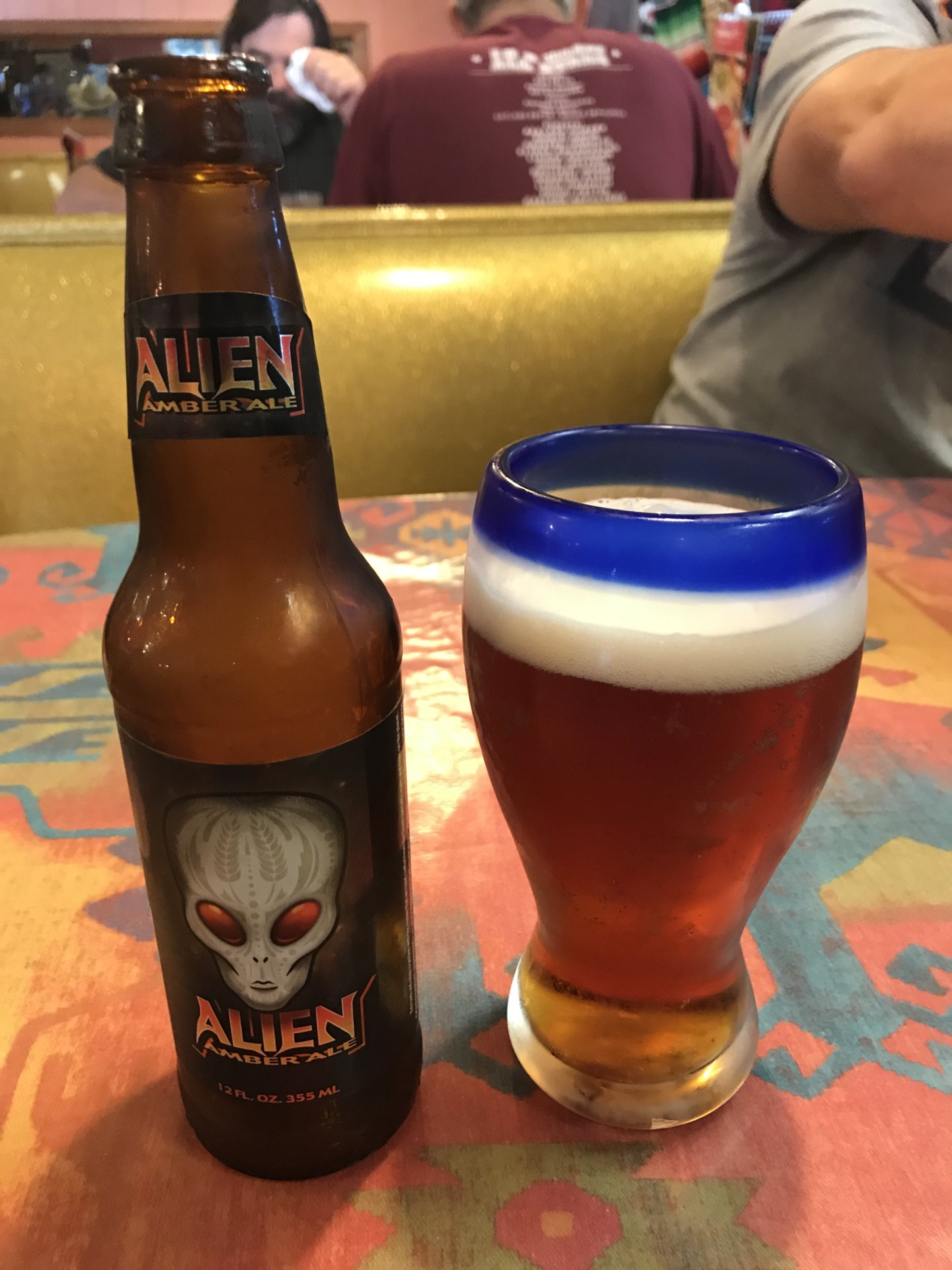 The views started getting better as we rolled into Northern New Mexico on Sunday morning. Thanks to @BigAxeJack, we had a secure place to drop off the tow rig and trailer at the Purgatory Ski Resort north of Durango and set out with the 40s. I really appreciate him keeping an eye on things while we were gone. 'Mud is always such a great resource.

With the rigs off of the trailer, we were off and running [rich] up U.S. Route 550. This is an amazing drive that I would highly recommend. 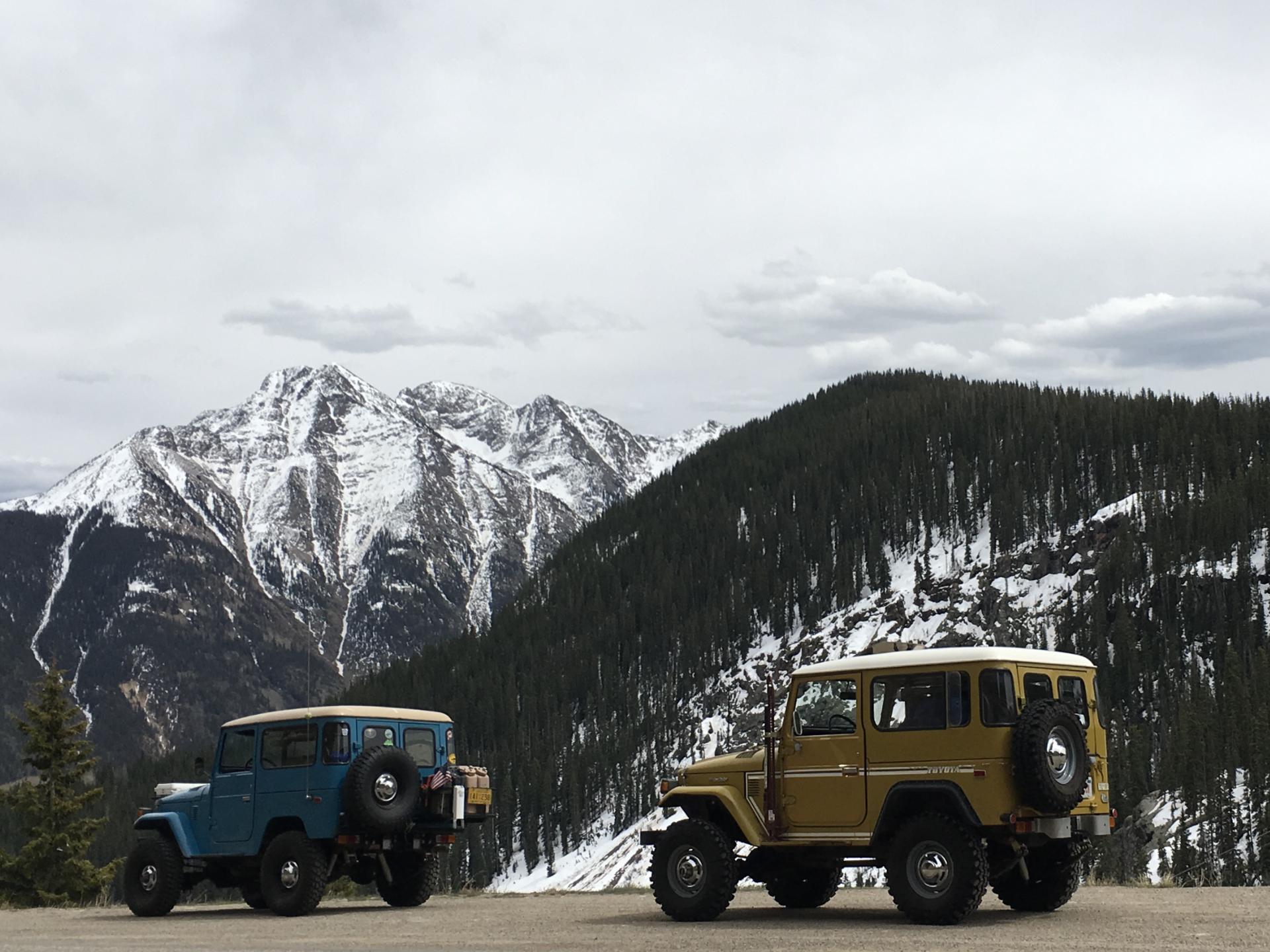 Naturally, we took a couple of fun detours as these rigs tasted high elevation and snow for the first time, at least in many years. They ran great, despite being at over 11,000' in some spots. 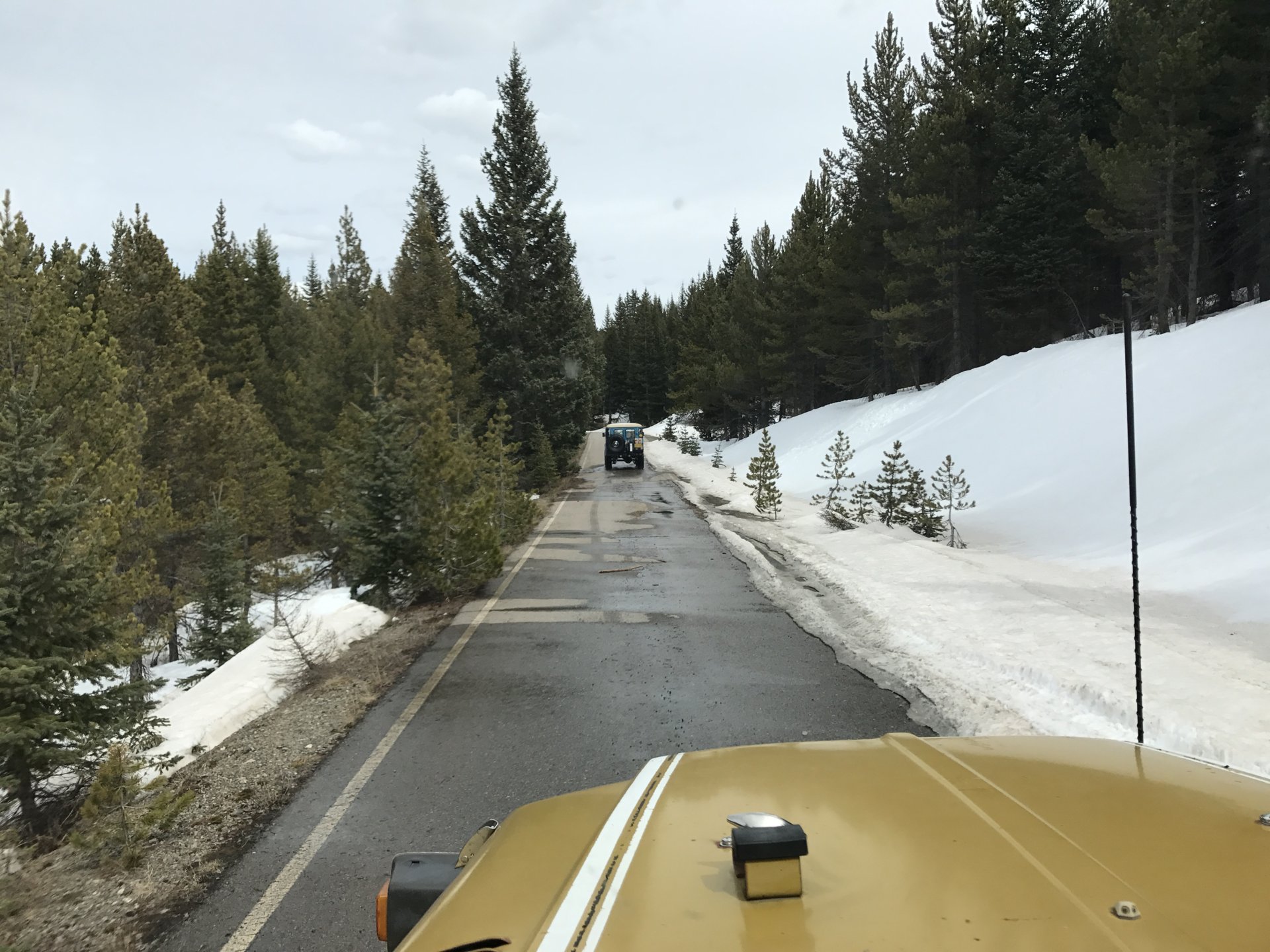 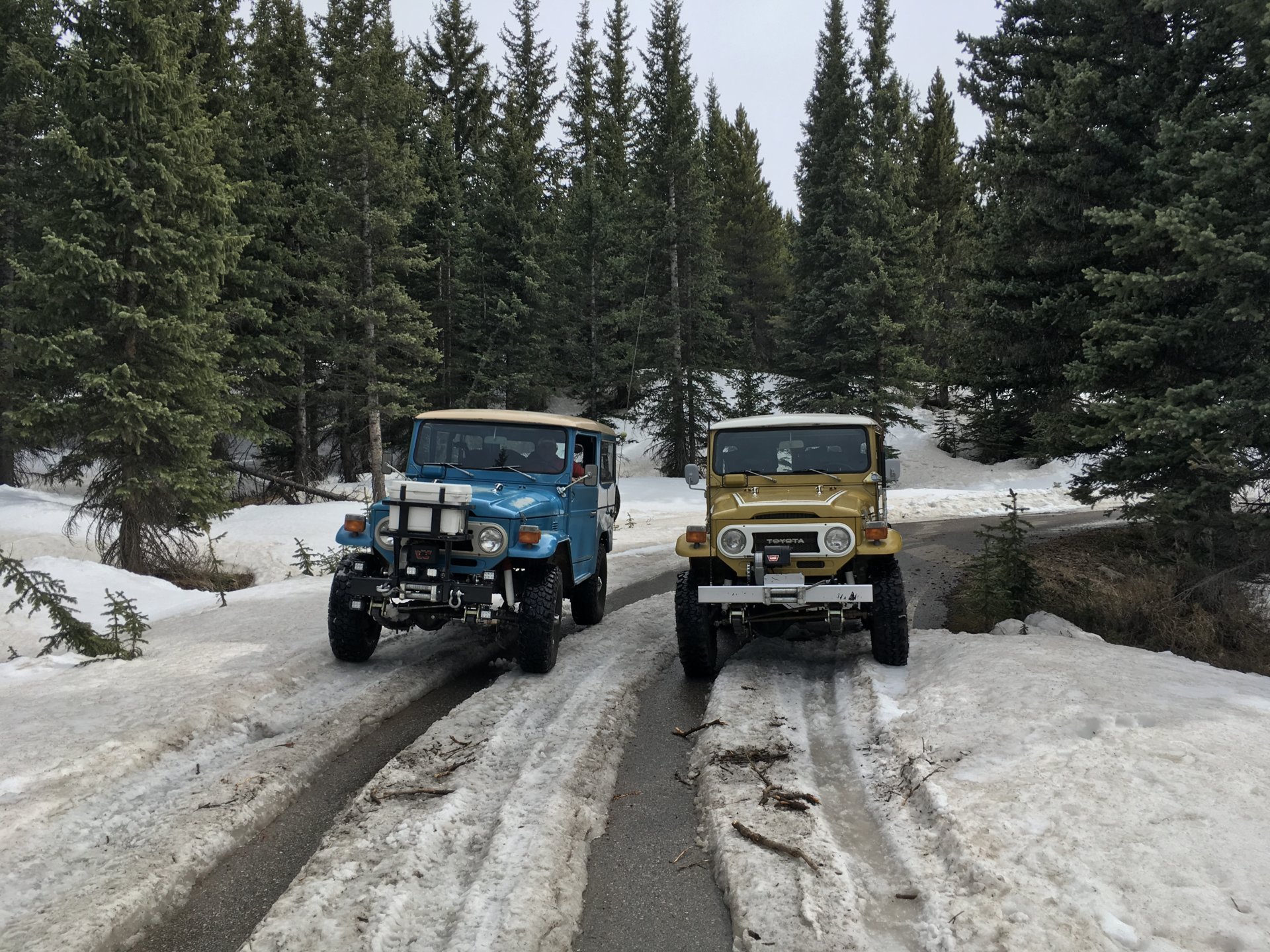 Inspirational pictures, I love seeing other mustard 40's out and about in the wild. I need to get to the garage....

We hummed on up over Coal Bank Pass, Molas Pass, and Red Mountain Pass as we neared Ouray, where we would meet my Denver buddy, Craig in time for brews. 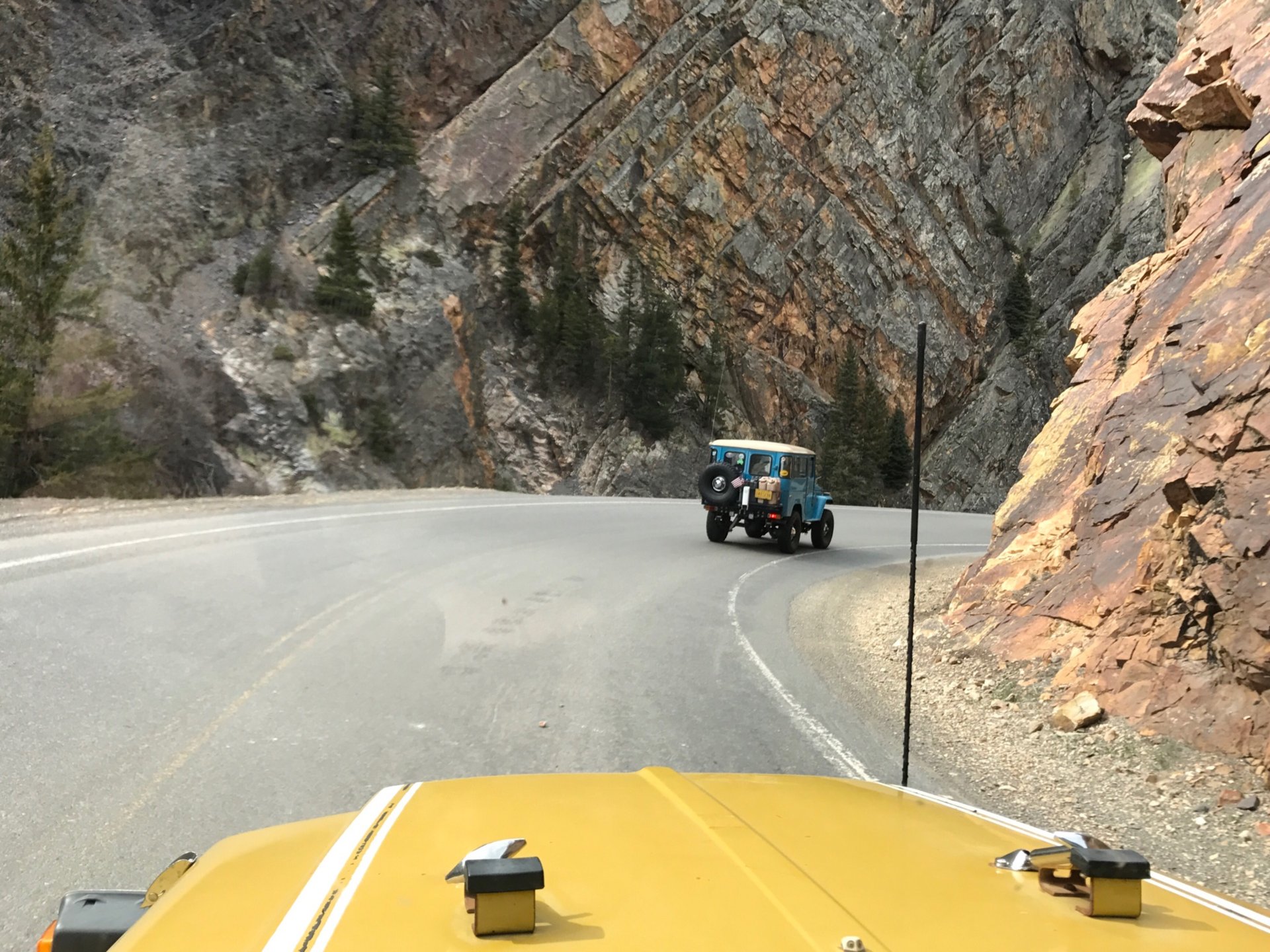 Silverton, CO off to the right. We would come back to Silverton a few days later. 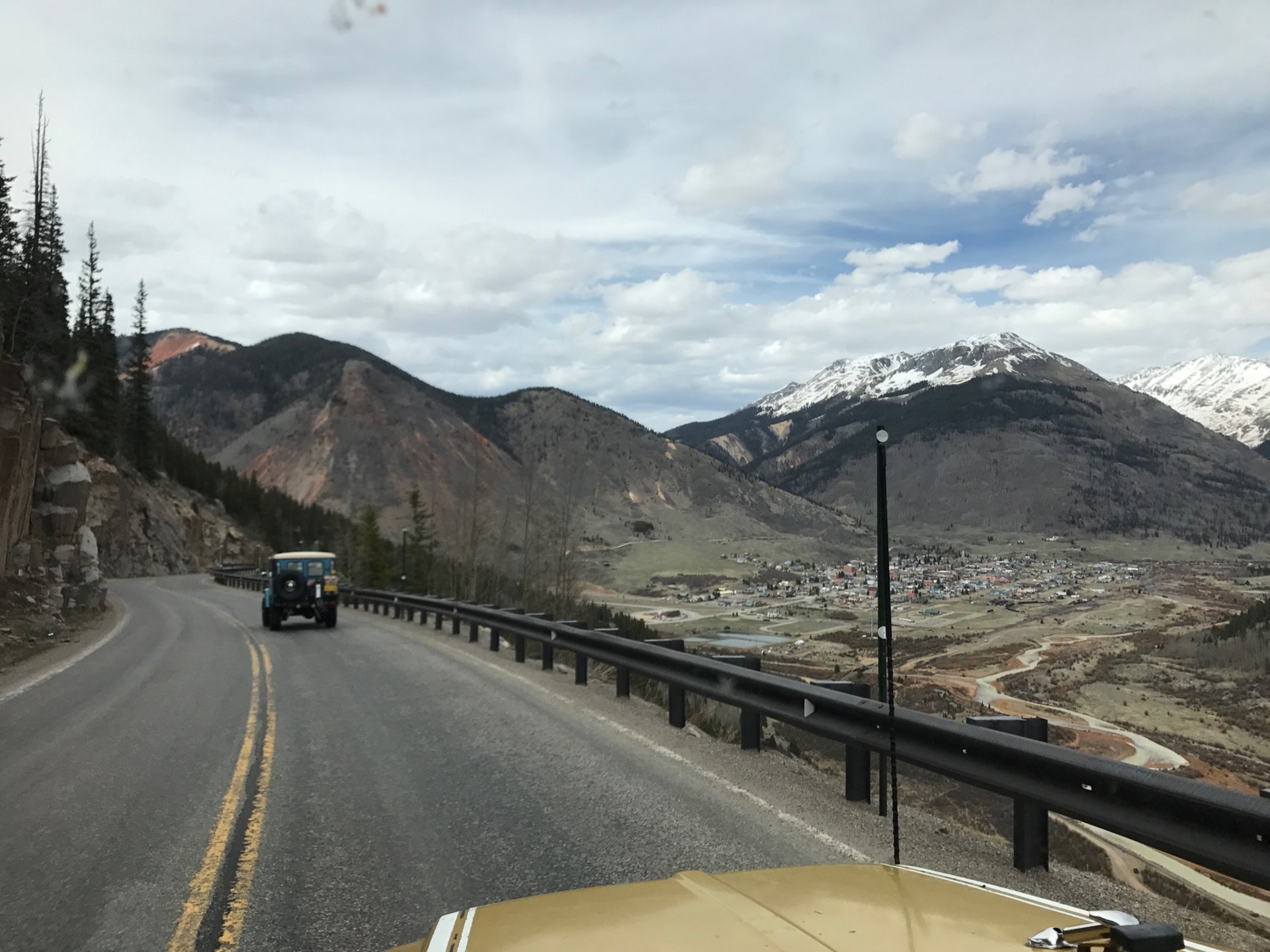 We got to Ouray around 4:30 that afternoon. The Camp Bird Blondes and weather were perfect, as we started out on a rooftop patio at the Ouray Brewery downtown. 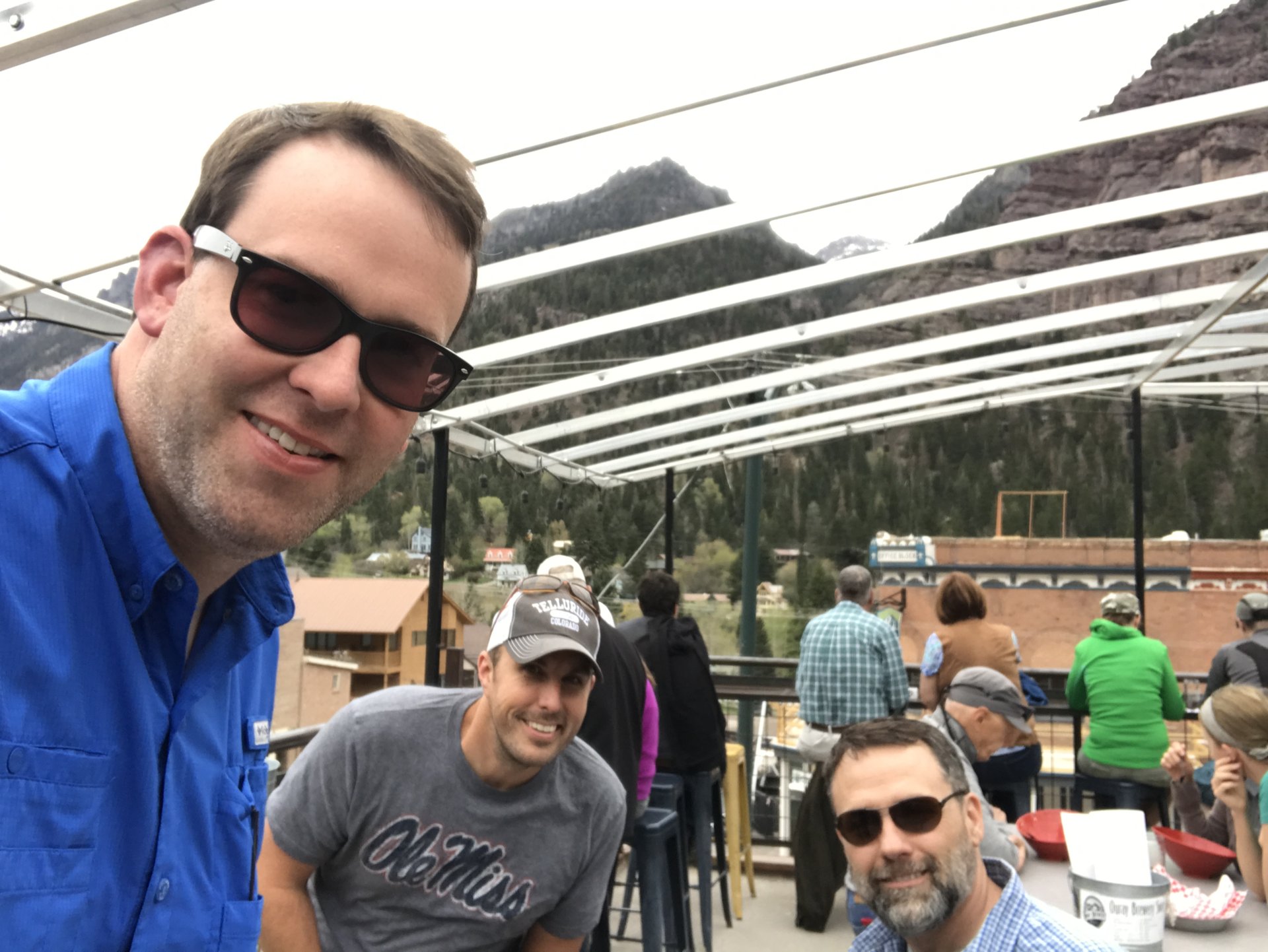 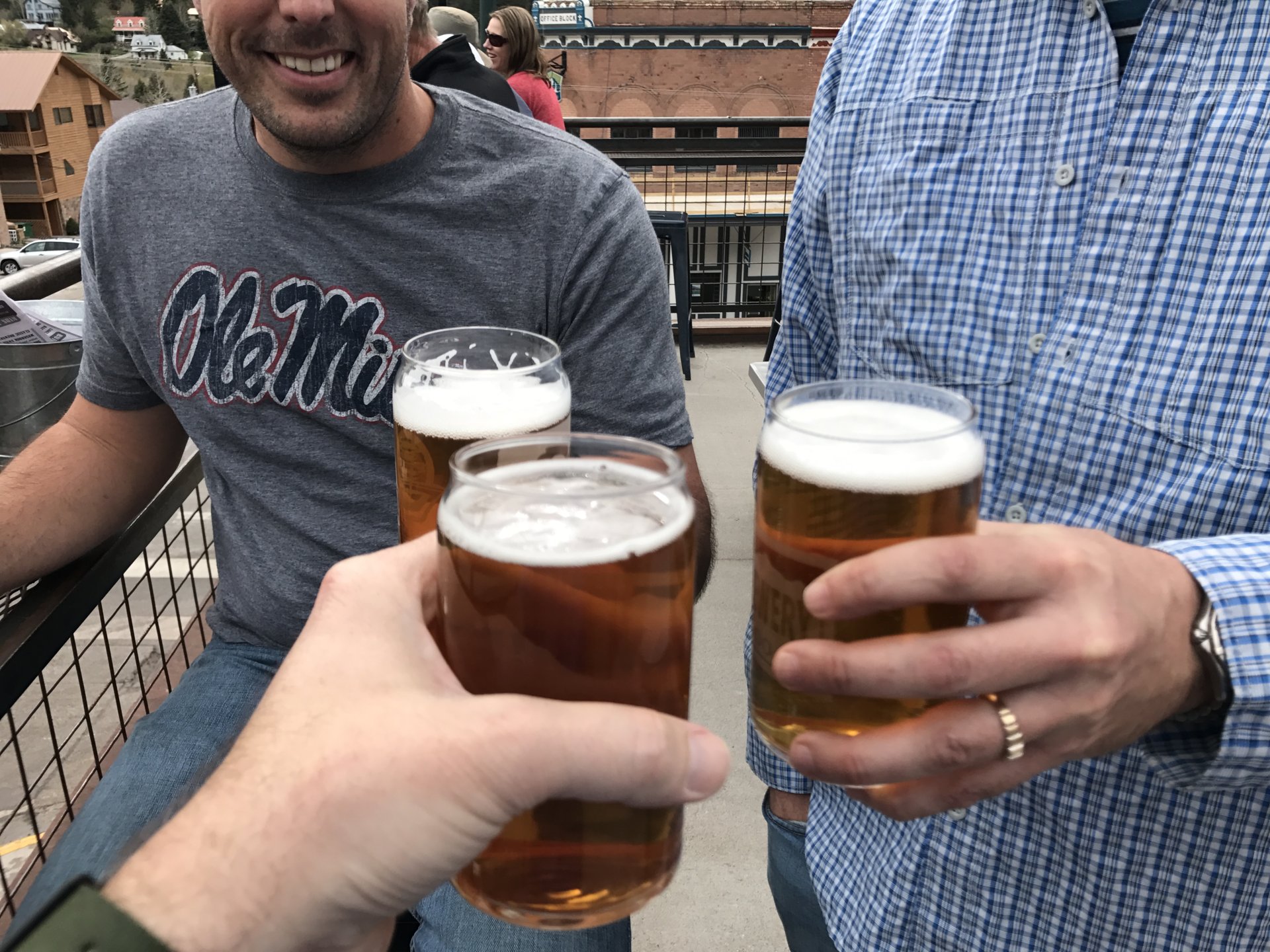 We were in the off season and we knew it, so the town was quiet. In the end, we spent most of the evening at O'Brien's Pub, which also had some fantastic beers and food. The bathroom had low ceilings, however. 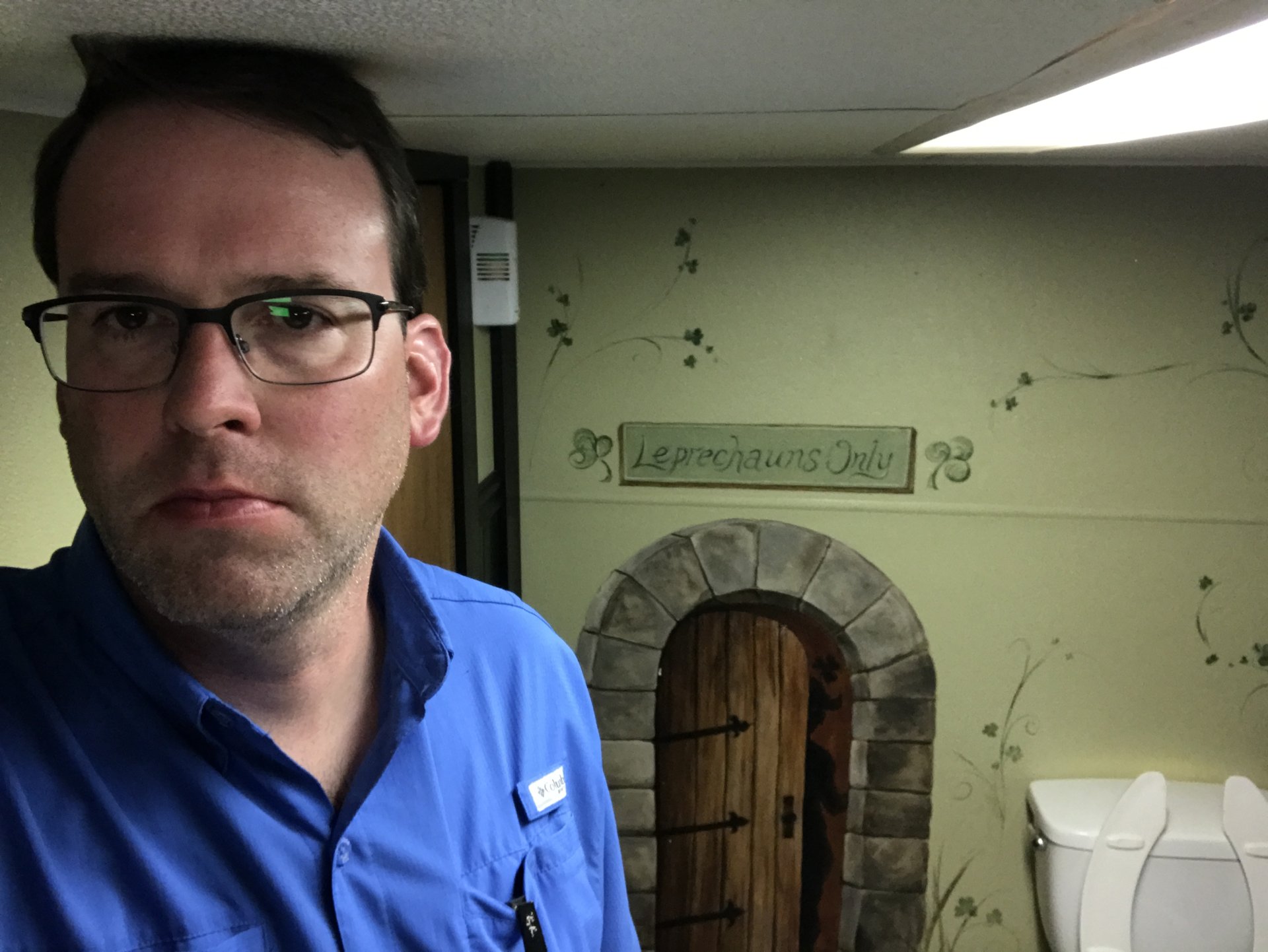 We stepped out for a few minutes to catch a nice sunset over to the East. 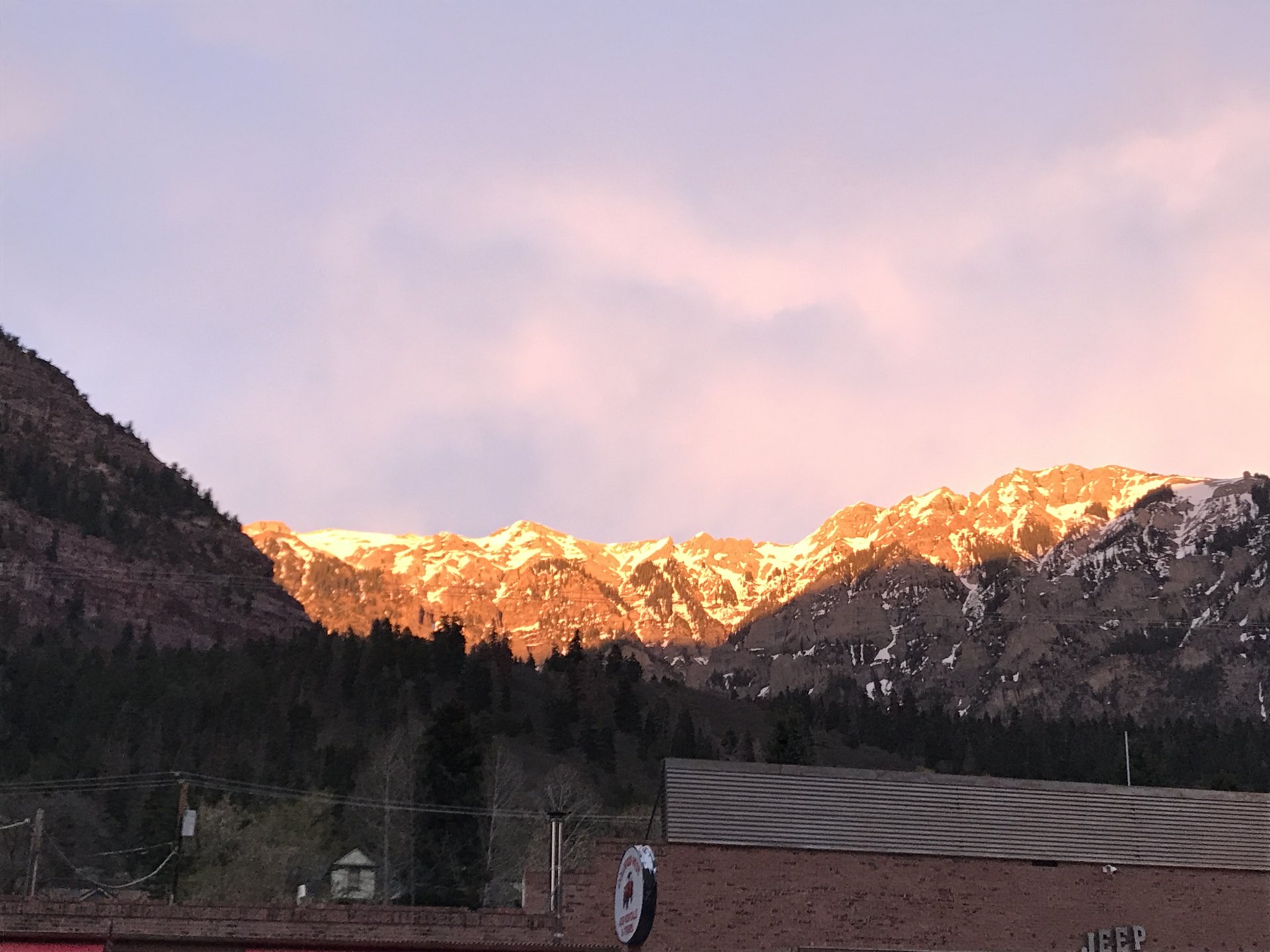 We stayed at the Ouray Comfort Inn, which was very clean and in an excellent location for accessing Ouray on foot. The hotel is owned by Bill, who drives a supercharged 1996 FZJ80. Really great guy. We spent so much time bullshitting with him that we delayed our departure a bit on Monday. Well worth it.

Side note: Craig joined our convoy in his 2007 yellow FJ Cruiser, pictured below. 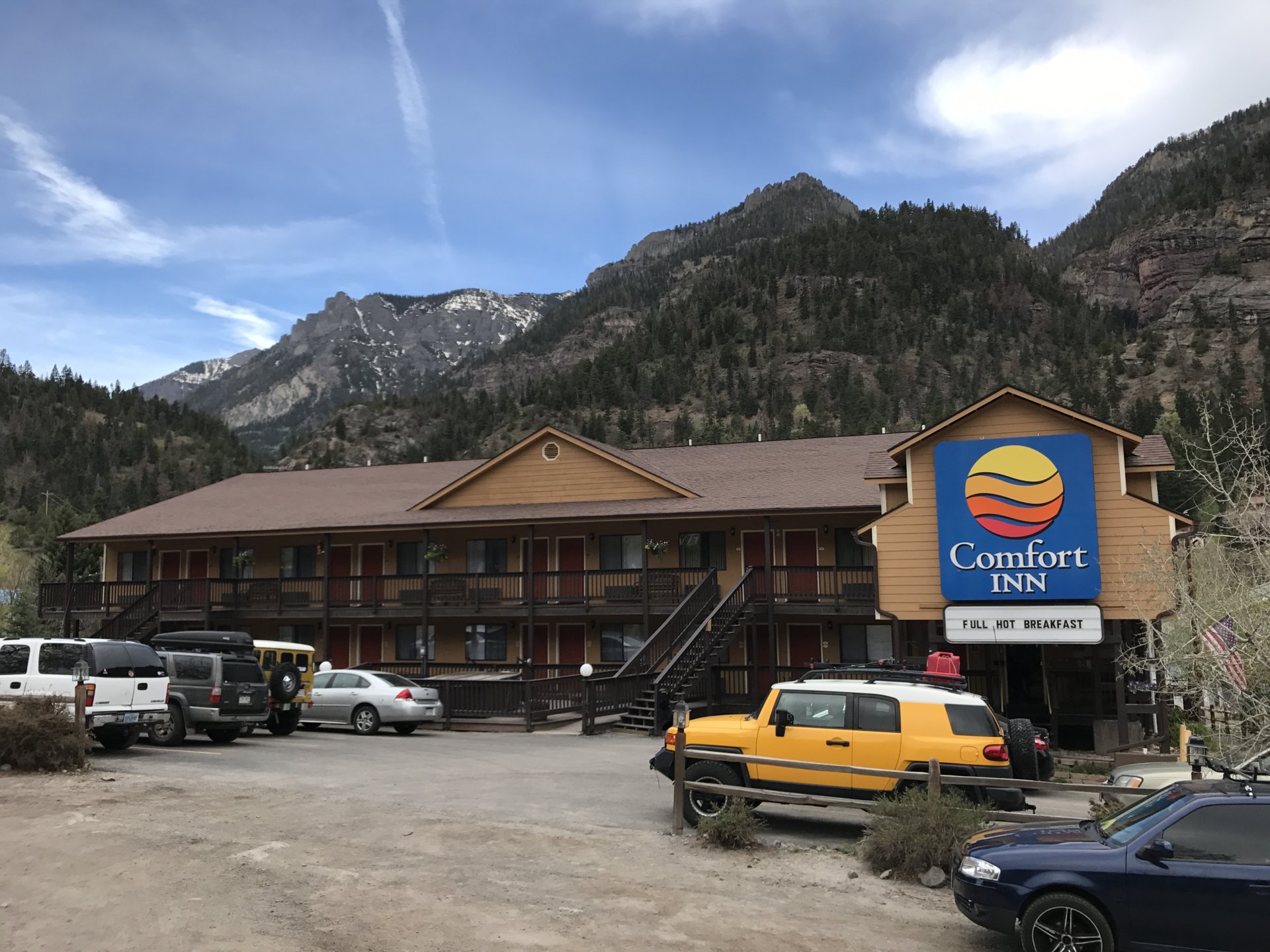 A couple of token shots and we were on the path to Utah. 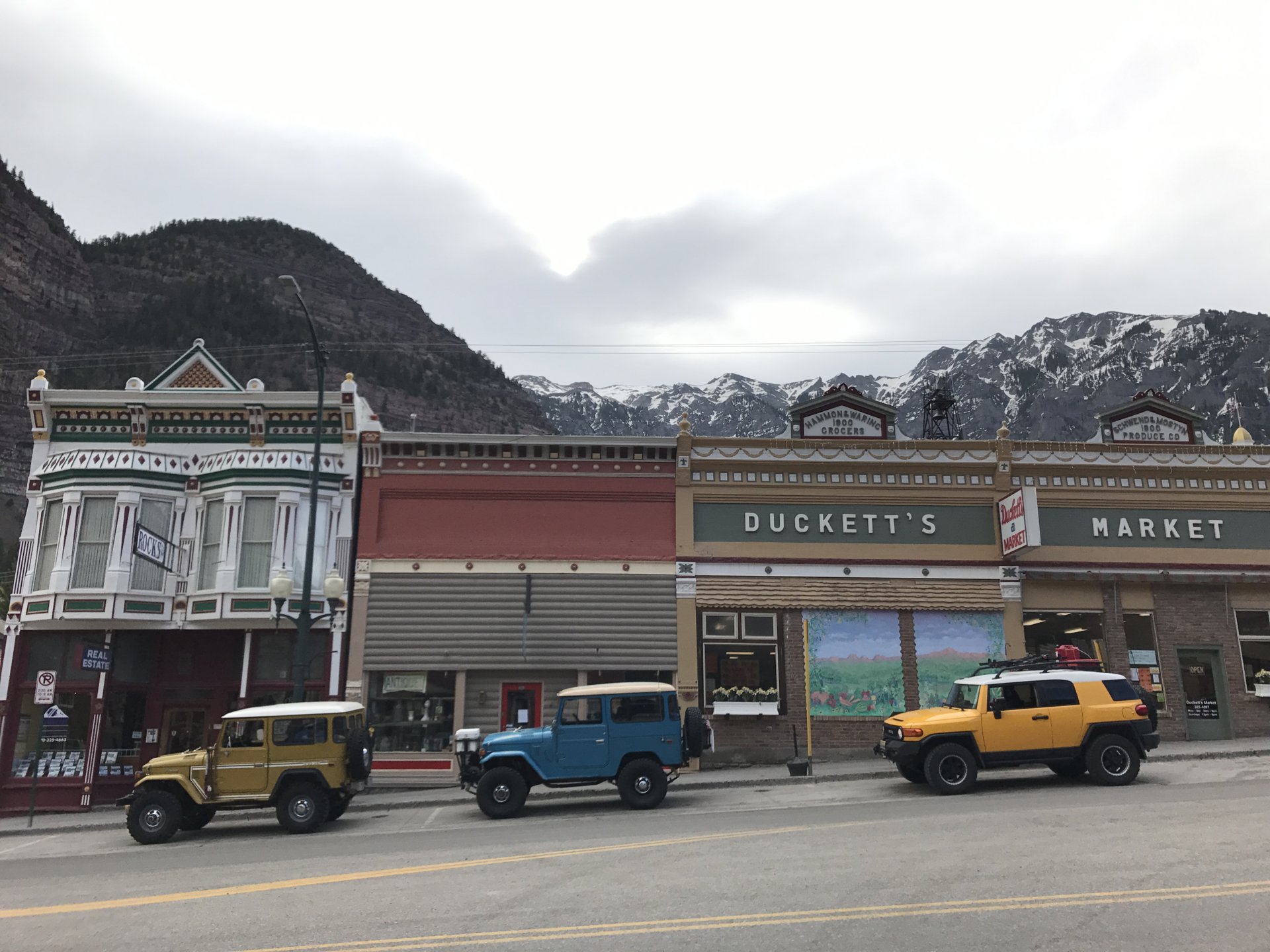 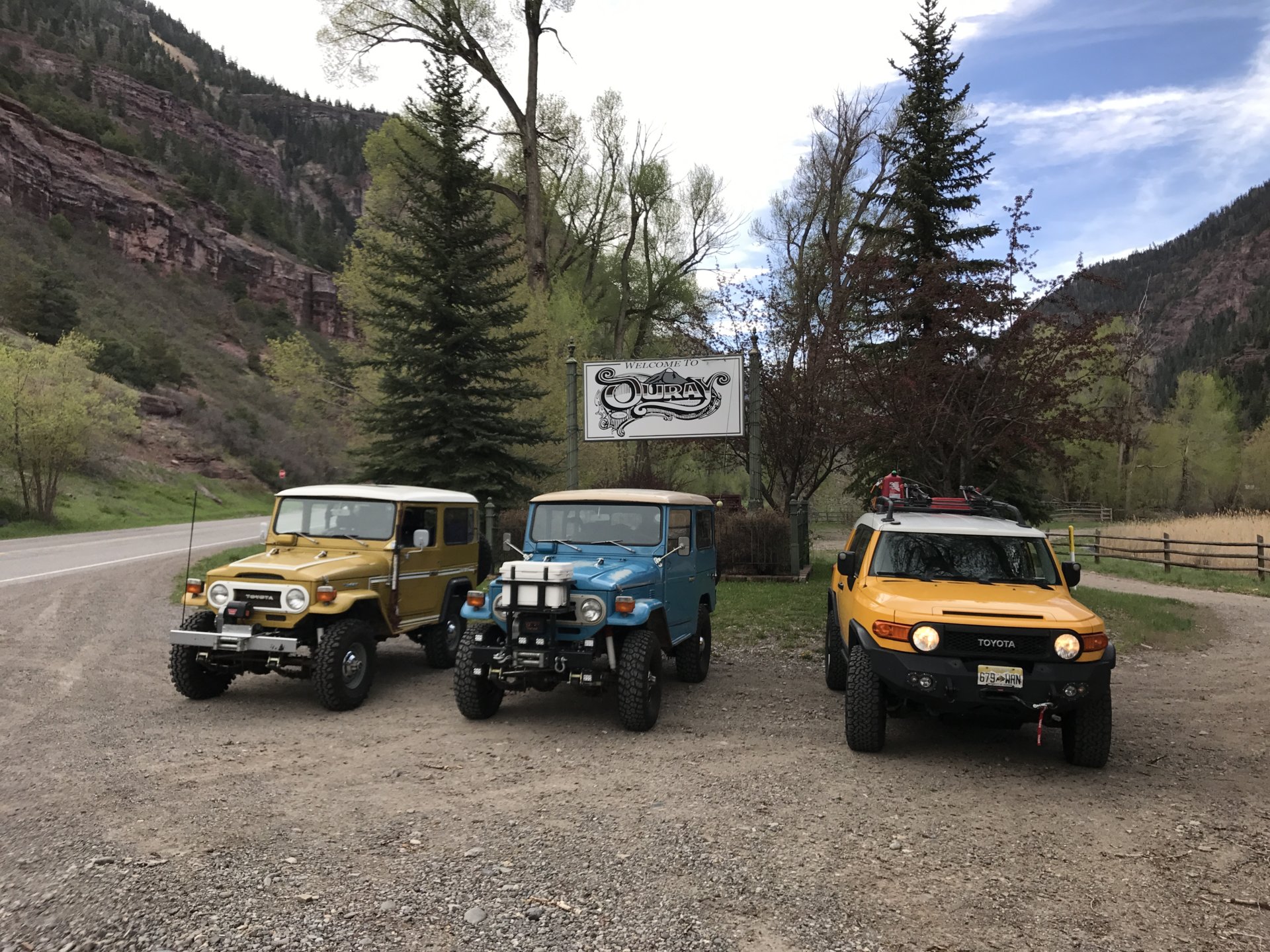 cbmontgo said:
We stayed at the Ouray Comfort Inn, which was very clean and in an excellent location for accessing Ouray on foot. The hotel is owned by Bill, who drives a supercharged 1996 FZJ80. Really great guy. We spent so much time bullshitting with him that we delayed our departure a bit on Monday. Well worth it.

What is with spacing between the 40s and the fj. Is the younger cousin not allowed to get too close to the older kids?

MOTOV8R said:
What is with spacing between the 40s and the fj. Is the younger cousin not allowed to get too close to the older kids?
Click to expand...

Correct. We asked him to maintain a distance at which he could be cropped out at any given time. Just kidding, but it does appear that way!

We hit Ridgway, CO for some massively overpriced groceries and liquor, then made a left/west turn onto Highway 62. This part of the drive also did not disappoint as we meandered towards the Utah border.

After a bit, Highway 62 begins to approach Placerville and the San Miguel River and the canyons tighten up a little. A left turn takes you to Telluride, and a right turn goes towards our destination for the night.