I have a newer set of Bridgestone Dueller AT's (Non-Revo) in 305/70/16. Finally had the chance to try them in some "shallow" mud and very loose dirt. These are the best AT's I have ever used. They always found traction. I am very surprised at their offroad prowess. They aren't as quiet as the Revos on road, but I give them the nod offroad.

I know these won't beat MT's in the mud, but if you are looking for a excellent AT for an 80, this one is great.


P.S.- I will take some pics and post them tonight.

What about Goodyear'n new Silent armor? Layer of kevlar and the MTR's sidewall technology... Anybody's .02?
D

Sorry the pics took so long. Before OME and 305's and after. 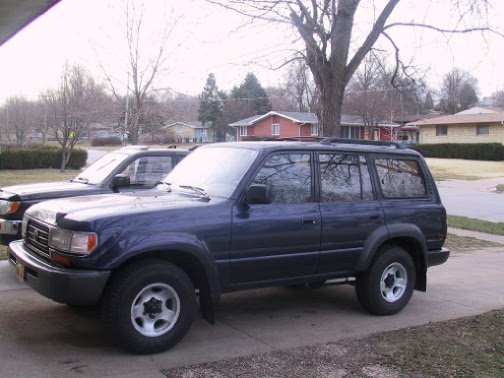 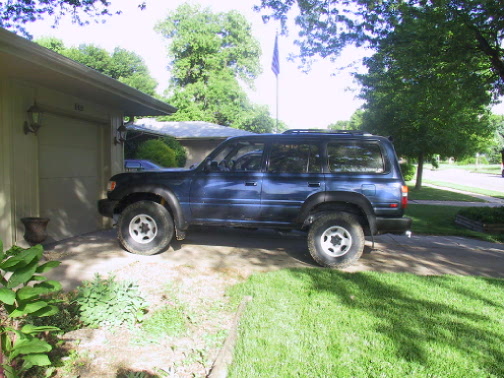 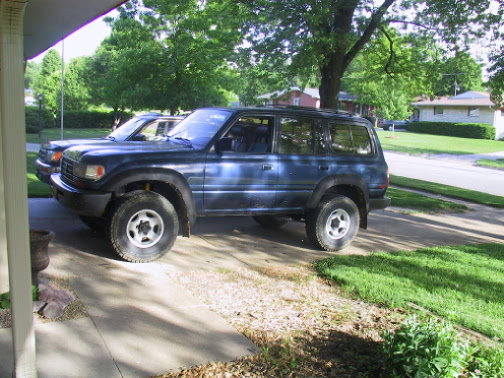 Close up of tread 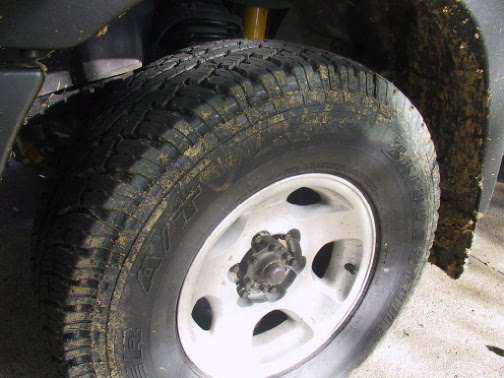 And a cool new sticker. Almost makes you want to keep that stupid wind deflector. 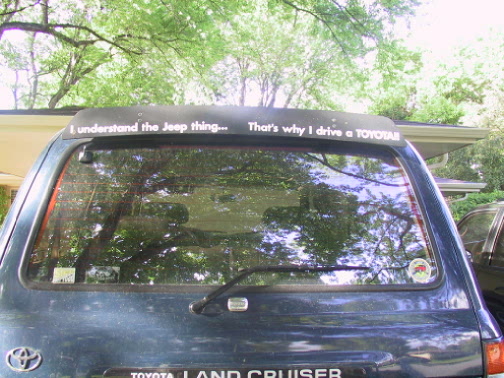 those tires certainly fill up the wheelwells.

btw is that the rattle can duplicolor stuff on the fender flares? I'd like to see a couple of closer shots in better light to see how that goes as your truck colour is similar to mine.
D

semlin said:
those tires certainly fill up the wheelwells.

btw is that the rattle can duplicolor stuff on the fender flares? I'd like to see a couple of closer shots in better light to see how that goes as your truck colour is similar to mine.
Click to expand...


Rattle can Plasticote Bedliner. Tried the Duplicolor and did not like the texture. I will post a pic of it manana. Used almost a whole can per flare.

Ditto on the non-Revo Dueler ATs. I have a set on my Nissan Pickup and I love them. Very quiet, great traction, and they haven't seemed to harden up as quick as my previous POS Les Schwab Wild Country ATs.

I have about 25K on the Duelers and they're as good as new. They handled snow and ice this winter much better than expected. Aired down to about 15 psi with a little sand in the bed and I was handling the weather better than most 4wd rigs and chained up whatevers. I attribute most of that to my driving prowess, but some credit is probably due to the tires.

To add to this "non mud tires in the mud" review, I had my Coopers in some very greasy (lots of clay) shallow mud a couple weeks ago on a Search and Rescue mission. I was actually kind of disappointed in them in terms of traction though they did not pack up with mud despite no high RPM self clearing on my part. Unknown is whether a true M/T would have done in that situation, but I was expecting better traction frankly.

This speaks only to their mud performance and in previous mud comparisions, the Cooper actually outperformed another vehicle on brand new serious trail M/Ts. On this claylike mud, they didn't grip to my expectation this time. I was able to pull out a truck that weighed far more than the 80 using my snatch strap, but that was simply momentum. They've been impressive on everything else.

Anyone with claylike mud experience care to comment? Will M/T's get a purchase on this greasy stuff or is there nothing that will really get a grip on this stuff? Spinning didn't get any real penetration, just resulted in a smooth slick trench a couple inches deep.

I ran the Bridgestone Dueler A/T (non revo) until my wife bought the 35 inch MTRs last Christmas. The Bridgestones were very good tires, quiet and smooth on road, with a relatively stiff sidewall for good control. Off-road they held their own on rocks and sand, but quickly gummed up in the mud. I was impressed at the sidewall toughness, as I have had the tires folded over many sharp rocks with no noticeable damage. The sharp Arizona rocks did take their toll on the tread, as it was beginning to show significant chunks of missing tread after only 1 year of offroad use.

I had an opportunity to compare traction between the Bridgestones and the MTR's on the Launch Pad (Golden Spike trail - Moab). Last year I ran the Bridgestones (265/75/16) up this very steep slickrock climb and at 15 psi they squealled the whole way up. I was at the very limit of their traction. I now have 315/75/16 Goodyear MTRs and they didn't slip or even chirp on the same climb at 20-22 psi. One of the differences, obviously, is the width, but the MTR's are much softer rubber.

That said, I still like the Bridgestones and recommend them for everything but mud.
G

As far as all-terrain tires go, my vote hands down are the Toyo M55's. We ran M55's on all of the back-country survey trucks on the slope in Alaska and never had a single problem. Stayed soft at -30, gripped in snow, slush, slop and wore like they were made of iron. We would retire them at 50K miles and all had more than half tread when they came off. $$$$$ but worth every penny. The only downfall is limited sizing. I think all 16" with 285/75 being the largest.
You must log in or register to reply here.
Share:
Facebook Twitter Reddit Pinterest Tumblr WhatsApp Email Link