My dang unit's too friggin' short ... 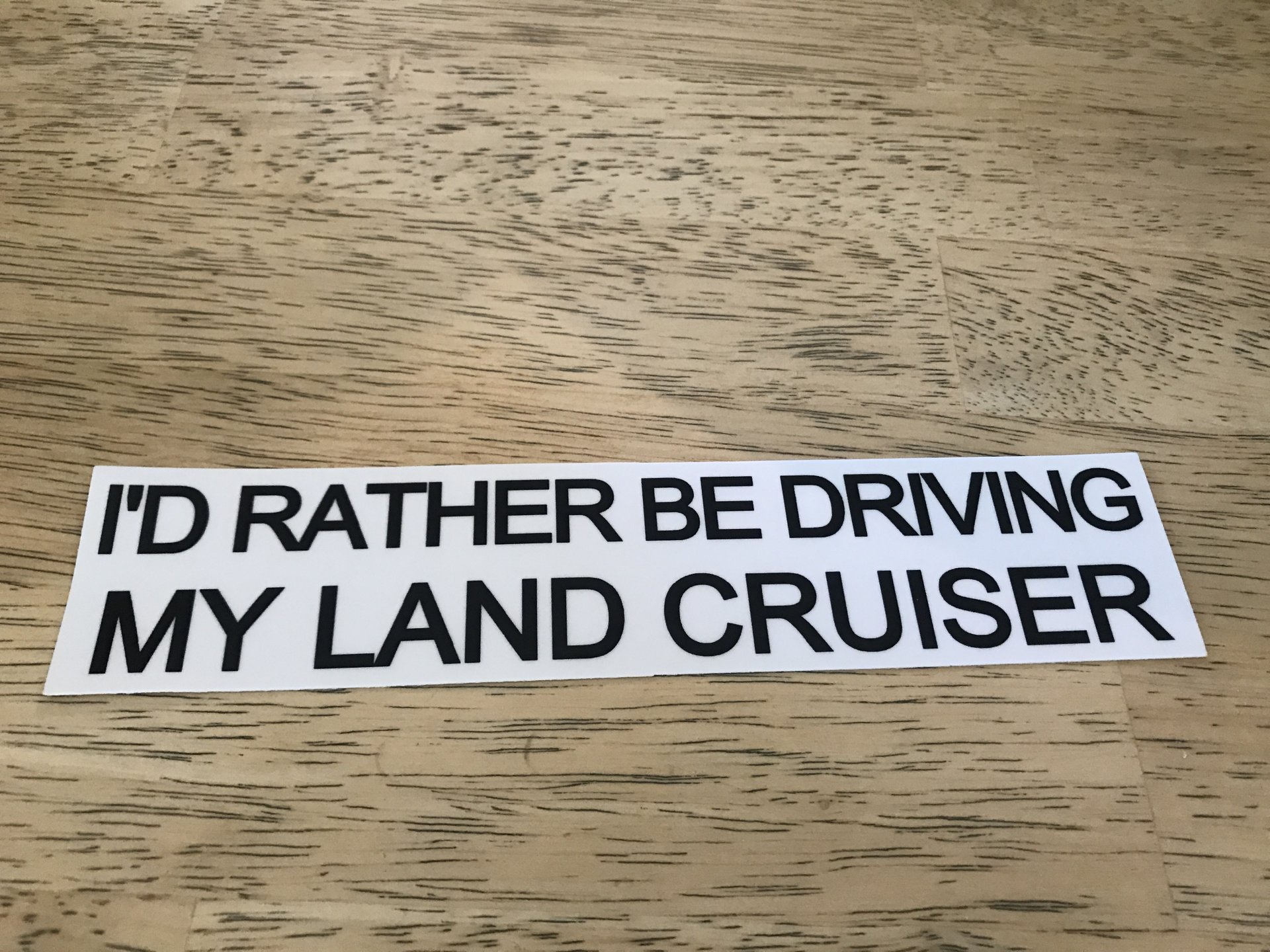 after reading all this ... can I send you one of these??

WTF are they doing working on it @ 6 on Sunday Morning....

MDK said:
after reading all this ... can I send you one of these??
Click to expand...

And also please wire 2 million bucks into my bank account.

Then I can proudly display my new bumper sticker on the ass end of my new tow rig ...


Texican said:
WTF are they doing working on it @ 6 on Sunday Morning....
Click to expand...

Some mechanics appreciate their customers.

More likely, ready to get you out of their hair!!! 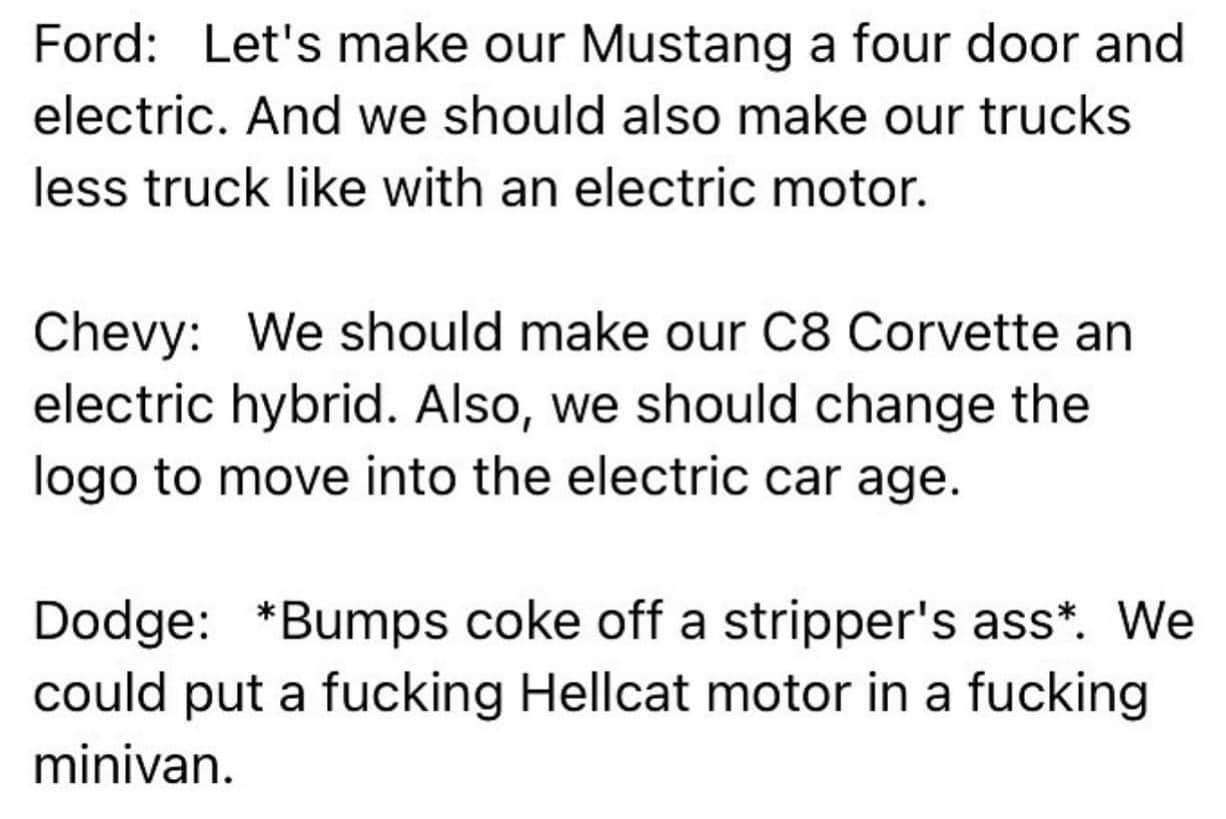 Got 2 thangs left. Some touch up paint on the front grill (the only unmolested JK part left on the rig) ... and it's at the paint shop. And gotta replace the amp on the stereo. All else is a done deal.

Dyno tune fella's gonna pick 'er up Monday and try to optimize the ponies to the ground.

So please join me in prayers to the horsepower gods.

Ev'ryone wants me to smoke the tires ... but no one wants to buy me new tires.

Tuner dude's havin' fits with the stand-alone brain and the absence of all the normal sensors. Specific'ly not havin' a vehicle speed sensor. He's been workin' with the HP Tuner folks and they think they got it all worked out. Hopefully makin' the last dyno run on Tuesday.

So evidently the tuner dude threw in the towel on cypherin' out the lack of the VSS. But here's what I've been texted:

"It runs well but can't set the final parameters.

Would you ever know the difference? probably not"

Supposedly it put 295 hp to the ground but I ain't seen no dyno printouts. And now it's back in the shop at TNT to wrap ev'rythang up. 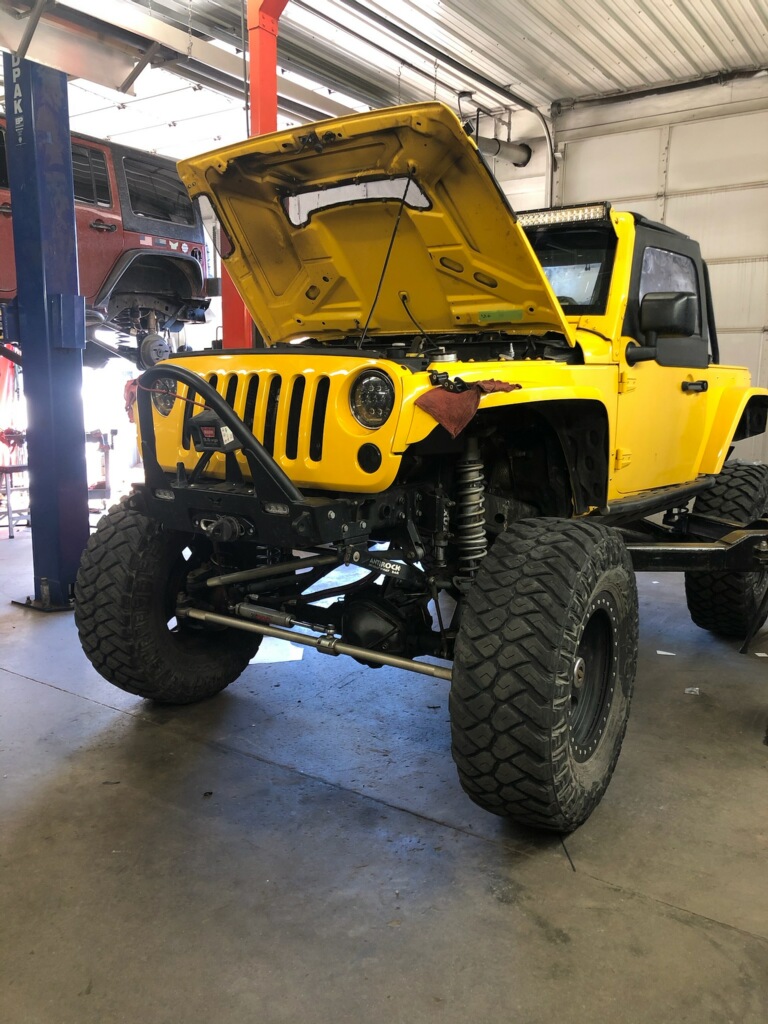 Fly up to Cheyenne on Monday, 15 March to fetch it. Hook up to my lil' campin' trailer and haul ass down to Texas to attend the Roundup.

Then drive it on back to Florida and try to find a tuner dude that knows what the f*** he's doin'.

Glad you are making progress! See you at the Roundup!

Fly up to Cheyenne on Monday, 15 March to fetch it. Hook up to my lil' campin' trailer and haul ass down to Texas to attend the Roundup."

Glad to see the heep is coming along, but your plan/pile

stinks.
You said that bfore "I'll be there!" ...and no show..."
I like old Kowboy with the Land Cruiser, This new Kowboy with Heep sucks!

I hopefully can make it, You know, support the Land Cruiser community..

Domek said:
You said that bfore "I'll be there!" ...and no show..."
I like old Kowboy with the Land Cruiser, This new Kowboy with Heep sucks!

They done successfully completed the final test drive of my jeep yesterday and she's now hooked up to my lil' campin' trailer and sittin' dead-on-ready for me to go fetch it Monday.

Bossman done approved my vacation time and all travel arrangements are completed.

Weather mite be a bit tricky gettin' out of Wyomin'/Colorada tho ...

They done successfully completed the final test drive of my jeep yesterday and she's now hooked up to my lil' campin' trailer and sittin' dead-on-ready for me to go fetch it Monday.

Bossman done approved my vacation time and all travel arrangements are completed.

Weather mite be a bit tricky gettin' out of Wyomin'/Colorada tho ...
Click to expand...


I have a hunch you'll handle that challenge without missing a beat. Just keep the rubber side down.

On Monday, plane's gotta get me to Denver and then a rental car's gotta get me on up to Cheyenne. Callin' for a record-breakin' blizzard of 2 - 3' of snow this weekend in Cheyenne/Northern Colorado. If'n I can just make it to my jeeper ... I can make it back out.

Ease a coupla hun'erd miles due South and I'll be clear of the storm.

If you are out in that mess, hope all is well @KOWBOY

Flight to Denver was cancelled. So best I could do was to just get close as possible and then drive the rest of the way. Albuquerque flights were booked. Kansas City didn't have no rental cars. So best available option was actu'ly Dallas. Flew outta Jax and damn near missed my connection in Atlanta ... but landed at Love Field right on time. Grabbed me a super, high-performance and luxurious T'yota Corolla and escaped the DFW nightmare. Shot up through Amarillo and over to Raton, NM to hit I-25. Up and over the pass and on into Colorado. Made it to Walsenburg right at dark and dogged 'er off. Covered better than 6 hun'erd road miles and now relaxin' with a 12-pack in the Presidential Suite of a shoddy Best Western motel-no-tell. Ain't got no fridge, but cool enuf for the Coors outside the room. Life is good.

Still not sure if'n I-25 is open on up to Wyomin' and hear my jeep is buried in a damn 5' snowdrift in TNT's parkin' lot.

Hit the road right at daybreak and busted right thru the heart of Denver. Roads clear ... traffic weren't. 'Bout the time I got up towards Ft. Collins, the overhead highway info signs all started sayin' I-25 was closed up to the Wyomin' border. Beautiful, sunny day so I figured they gotta open up the damned thang soon and mize well just go right up the gates and wait it out.

The 18-wheelers were lined up on the shoulder as always as I went by 'em to the gate. And it was open. Highway patrolman waved me right thru. They literally just opened it up. That's good livin' right there.

Interstate was clear and dry right up to Cheyenne. The city streets were bad tho. Turned in the rental car and went to see how f***ed the jeep was. The trailer was actu'ly more snowed in than the jeep. 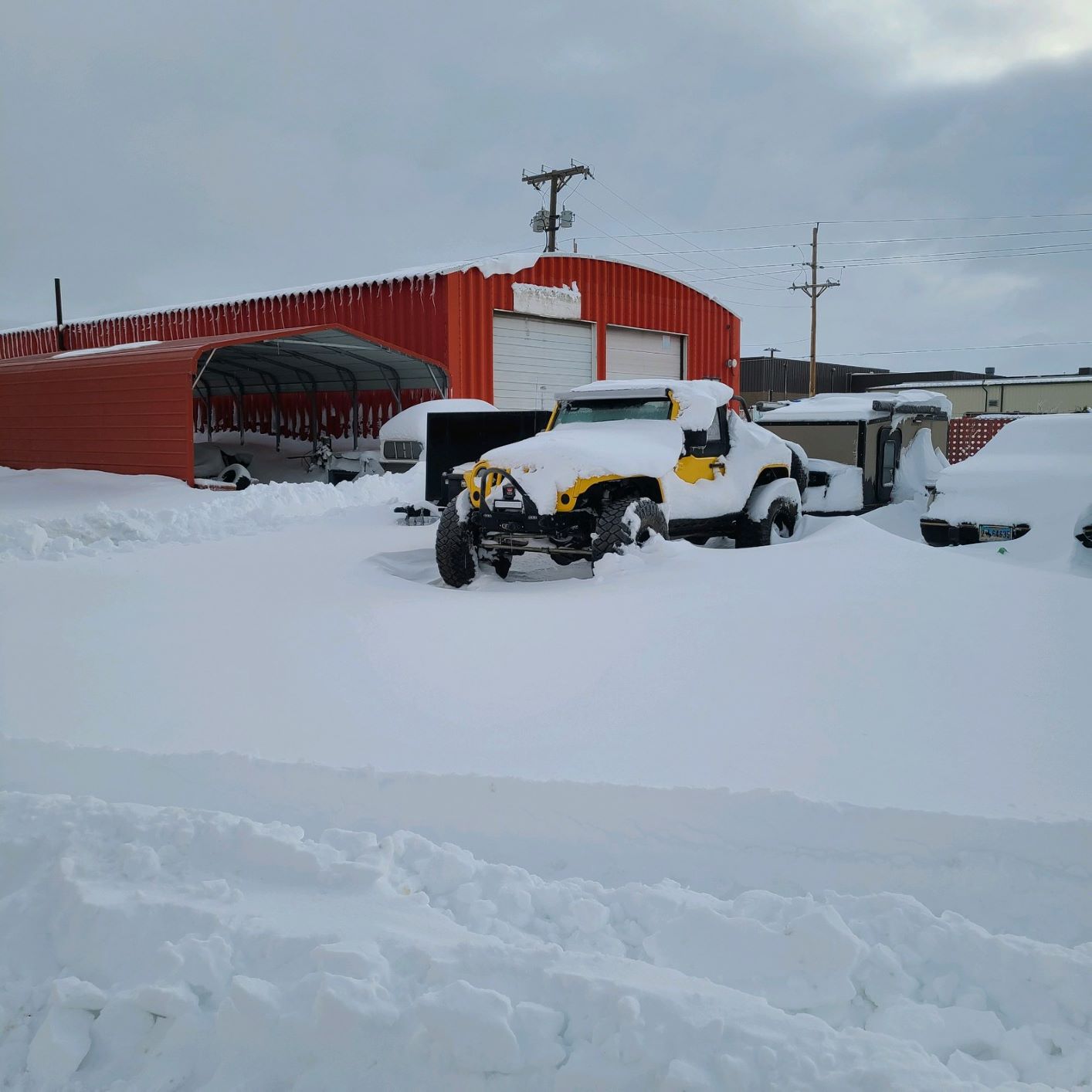 So fired up the jeep to let 'er warm up and then dug out some in front of the trailer tires to make a path. Locked 'er up in 4wd and popped 'er right out. Good to go.

Then I found where the 5' drifts really were ... at my storage unit. 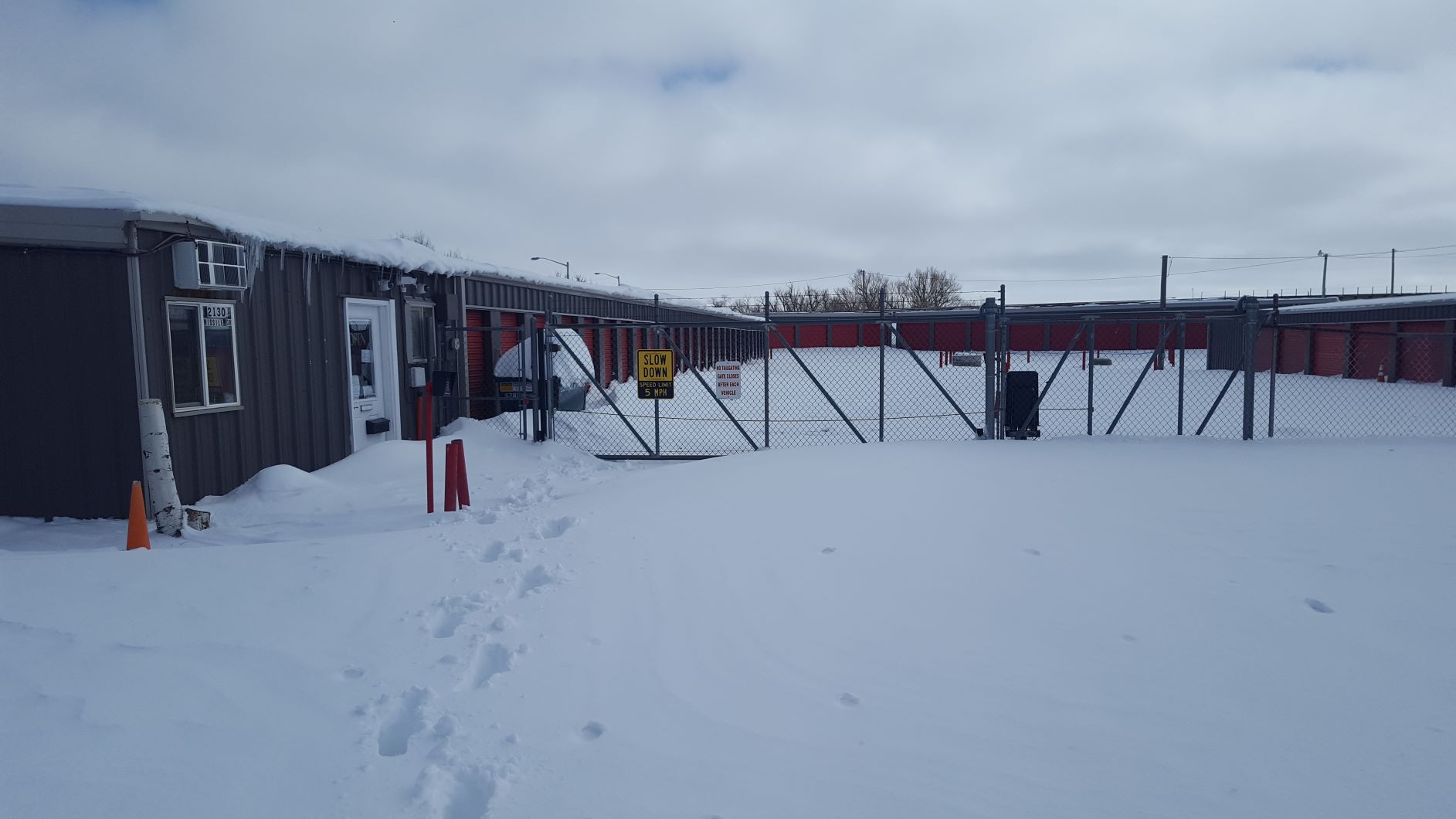 Gate wouldn't open. Nobody in the office. Nobody answerin' any of the emergency phone numbers listed on the door. f***. Can't leave without all my s***.

So threw the snow shovel over the fence that I had borrowed from TNT. Then found the tallest drift against the fence and climbed over. Commenced to makin' me a tunnel to my door. 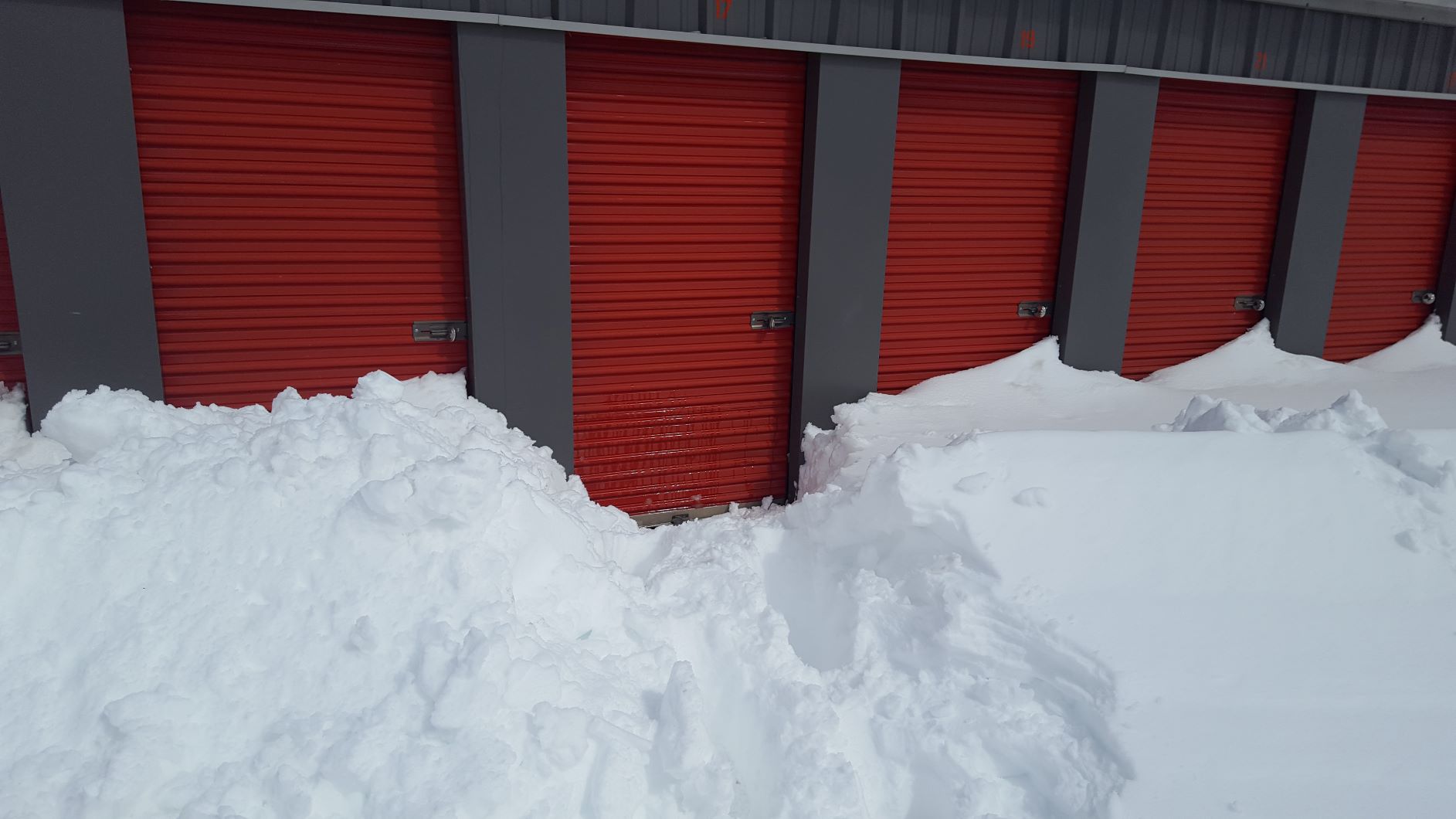 Made 'bout twenty trips and toted ev'rythang to the fence and threw it over into a pile. 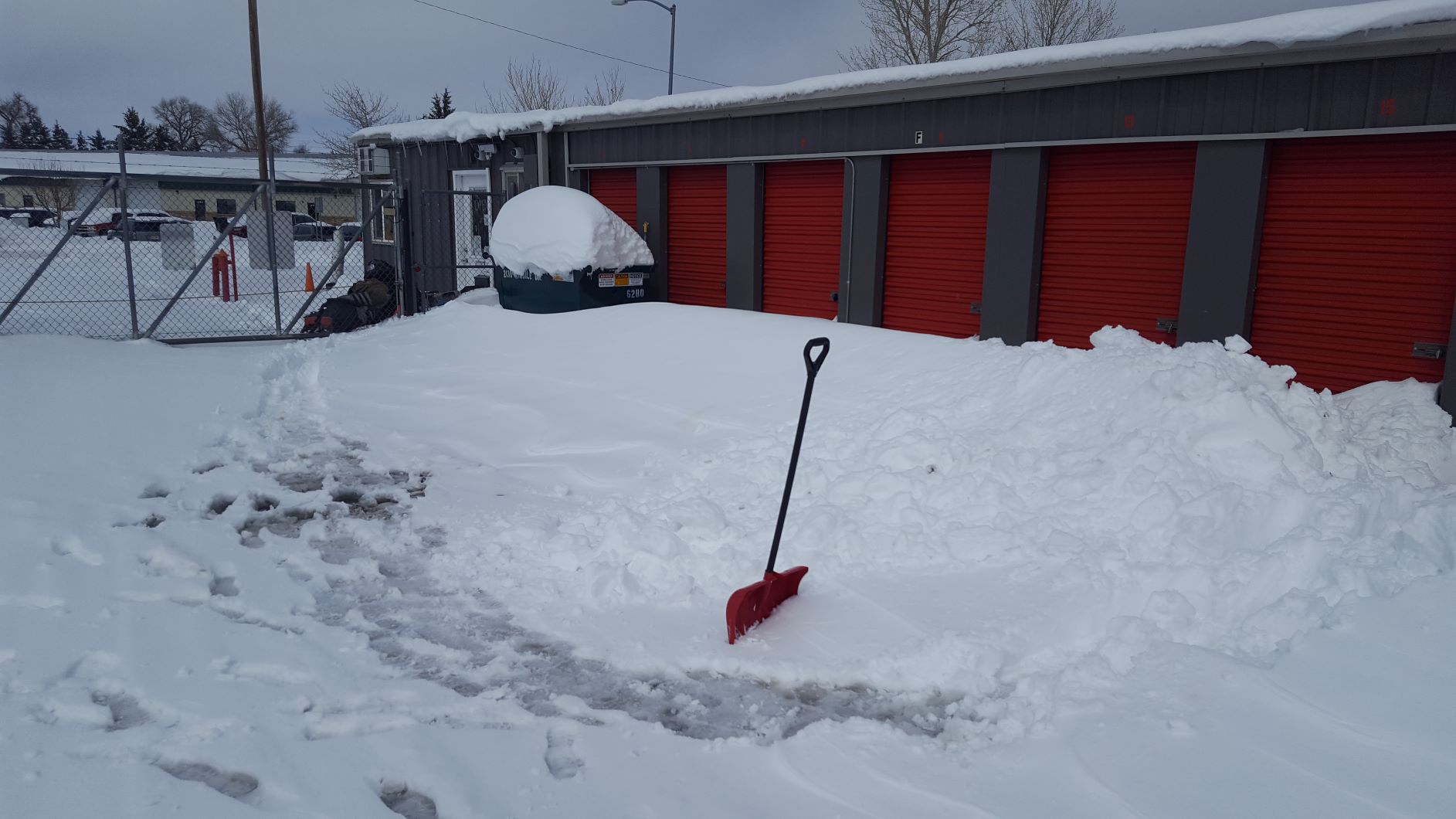 Then climbed back over the fence and made 'bout twenty more trips over to the street and just chunked it all into the trailer. Gotta get the f*** outta town. Here's drivin' to the on ramp for I-25 ... 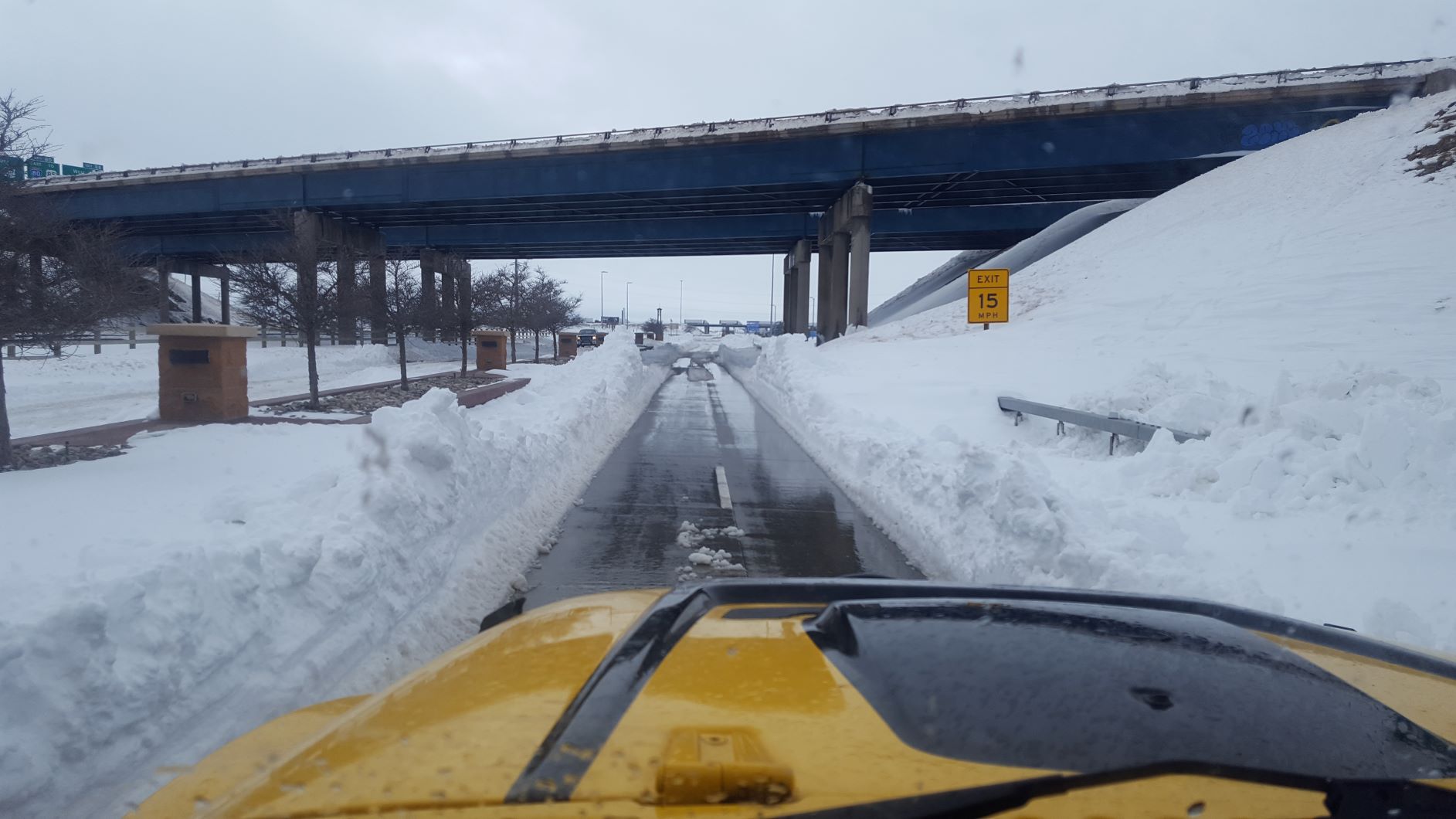 Gotta leave 'cuzz they was callin' for another blizzard. Back to the South of me over Raton Pass. Wasn't countin' on that one.

So back thru the Denver traffic again and down to Pueblo. This morning, goin' north, the countryside was clear all the way to Pueblo. Not no more. Callin' for 2 - 4' on the pass so gotta go. Got damned nasty by the time I got to Trinidad. White-out and hard to see where the road was. Backside of the pass was clear though. Woulda been a bad deal a few hours later. Still blowin' snow with huge north winds so kept drivin' all the way to Clayton, NM.