Means it ain't a hun'erd percent.
I ain't happy till you ain't happy.

Slow day at work so mize well get y'all caught up on this here seemingly never-endin' saga. Let's backtrack just a bit and go from there.

Tuner #3 was correct about the leaks.

And the Hemi shop fixed the leaks. So all good there.

Hemi shop then said they got Tuner #5 lined up and he specializes in Hemi JK's and works with Dodge and AEV to make their conversions work.

We learned from him that evidently, the 2011 Challenger brain is physic'ly a dif'rent lil' box than my 2009 Charger brain ... and requires a dif'rent harness to plug into it. So to swap to that 2011 brain would mean swappin' out to that engine harness as well. That would suck.

However, his theory at that point was that the actual base programmin' for a 2011 Challenger brain could be installed into my 2009 Charger brain. But that's a Chrysler f***in' thang.

And then the Hemi shop done found a dude at Chrysler that was gonna try to do this sometime with his boot-legged Chrysler computer.

But when the dude from Chrysler showed up, he determined that the base programmin' for the 2011 Challenger brain can NOT be forced into my 2009 Charger brain afterall. f*** me runnin'.

But he said he could make it run with the brain I got.

So the Hemi shop downloaded the f***ed up program outta my brain and sent it to the Chrysler Tuner #6 Dude and he done worked from home tryin' to alter/modify/unfuck it usin' his special computer in his spare time.

And the key was that the Chrysler Tuner #6 Dude was able to f*** with s*** in my brain that ain't accessable by the reg'lar HP Tuner folks and he was able to unfuck what Tuner #1 f***ed up. Cheers to Stage6 Motorsports in Jacksonville, FL for actu'ly givin' a f*** enough to make 'er run!

But she still has a serious lurchin' action if'n ya try to crawl at like 1500 rpm. Power thru it no problem at all. But she don't crawl. Tuner #6 Dude showed me on the computer where the brain is functionin' perfect durin' the event. He believed there's somethin' in the driveshaft/suspension causin' the issue ... not the brain. And to prove it, we drove in reverse with no issue at all. So then I needed to put 'er in the local jeep shop to see if'n we could find some sorta drivetrain issue.

And then the local custom jeep shop determined there's nuthin' wrong with the driveline/suspension that is causin' the ungawdly lurchin' action at below 1800 rpm.

The jeep shop hemi guy said I got too big a cam and she'll never run that low. He suggested puttin' a stock cam in it and my problems would disappear.

Then it was back to the Hemi shop to get a second opinion.

Done spent an hour or so at the hemi shop talkin' strategy. They're a race shop so I had to emphasize that I don't wanna 8-second quarter-mile jeep ... I wanna 8-minute quarter-mile jeep. After many conference calls with the engine manufacturer and some engine builders, the thought was that the cam is indeed the cause of the low-rpm lurchin' and replacin' it with some sorta truck/RV cam will cure it.

And after drivin' it for a week or so on my daily commute, another glitch popped up 'round 3.000 to 3,500 rpm that seems like a fuel delivery problem. Chrysler Tuner #6 Dude admitted he wasn't able to completely unfuck my brain but he thought he had worked around all the issues. Reckon not. All seem to agree that gettin' shed of the Chrysler ECU s*** and goin' with the Holley Terminator X system is in my best int'rest.

Hemi shop started searchin' for some kinda low-end truck/RV cam. And it weren't goin' too well. But evidently Competition Cams actu'ly makes what they call a "Rock Crawler" cam.

But not for my engine.

But they said they could custom grind one for me.

And the Holley Terminator X system is on back-order for 3 weeks.

And here we are today ... the custom-made cam and Holley EFI ECU are paid for and I done made an appointment for 03 August to get 'em both installed. Consensus is this combination will fix all the engine issues ... and be user-friendly and trouble-free for many, many miles.

It's August 3. Where are you today? At the tuner shop?? 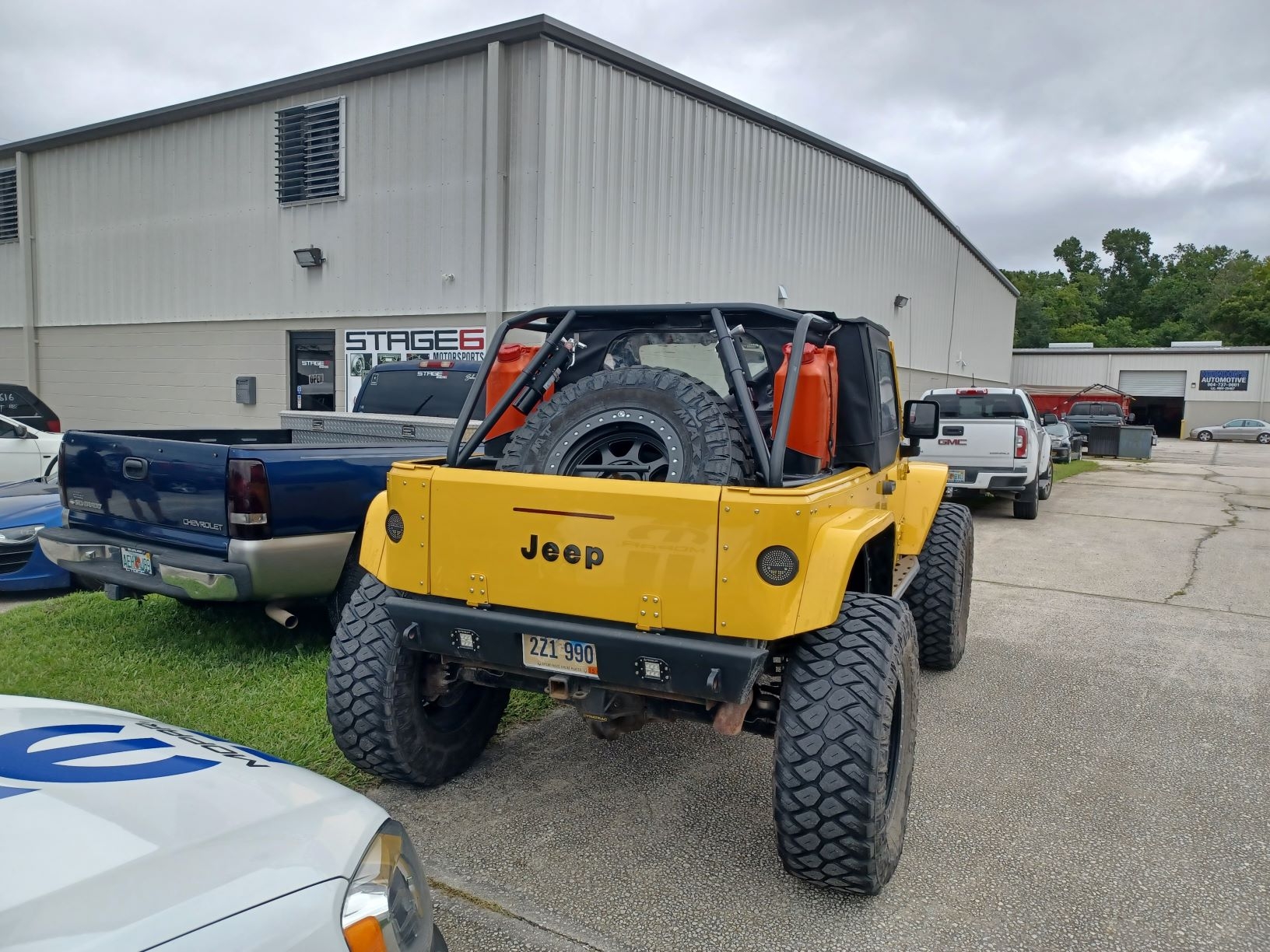 After hun'erds and hun'erds of daily commutin' miles since the shop got 'er runnin', I just ain't convinced the cam's got anythang to do with it. Ev'ry once in awhile, when all the stars and Russian satellites are perfectly aligned, she runs just fine at the low rpm's. Very rare ... but the fact she's done it at all makes me doubt it's a mechanical issue with the cam. I'm fairly convinced it's all my f***ed up brain still.

And the Hemi shop agrees ... maybe.

So the plan is to replace my f***ed-up remnants of a Chrysler brain with the new Holley Terminator EFI ECM and then ty to tune 'er. If'n that don't fix 'er, then they'll go 'head and swap out the cam. No harm ... no foul.

As a bonus, come to find out, the shop evidently has a dude that's f***ed with air conditionin' systems alot so they're gonna try to fix my A/C to boot. 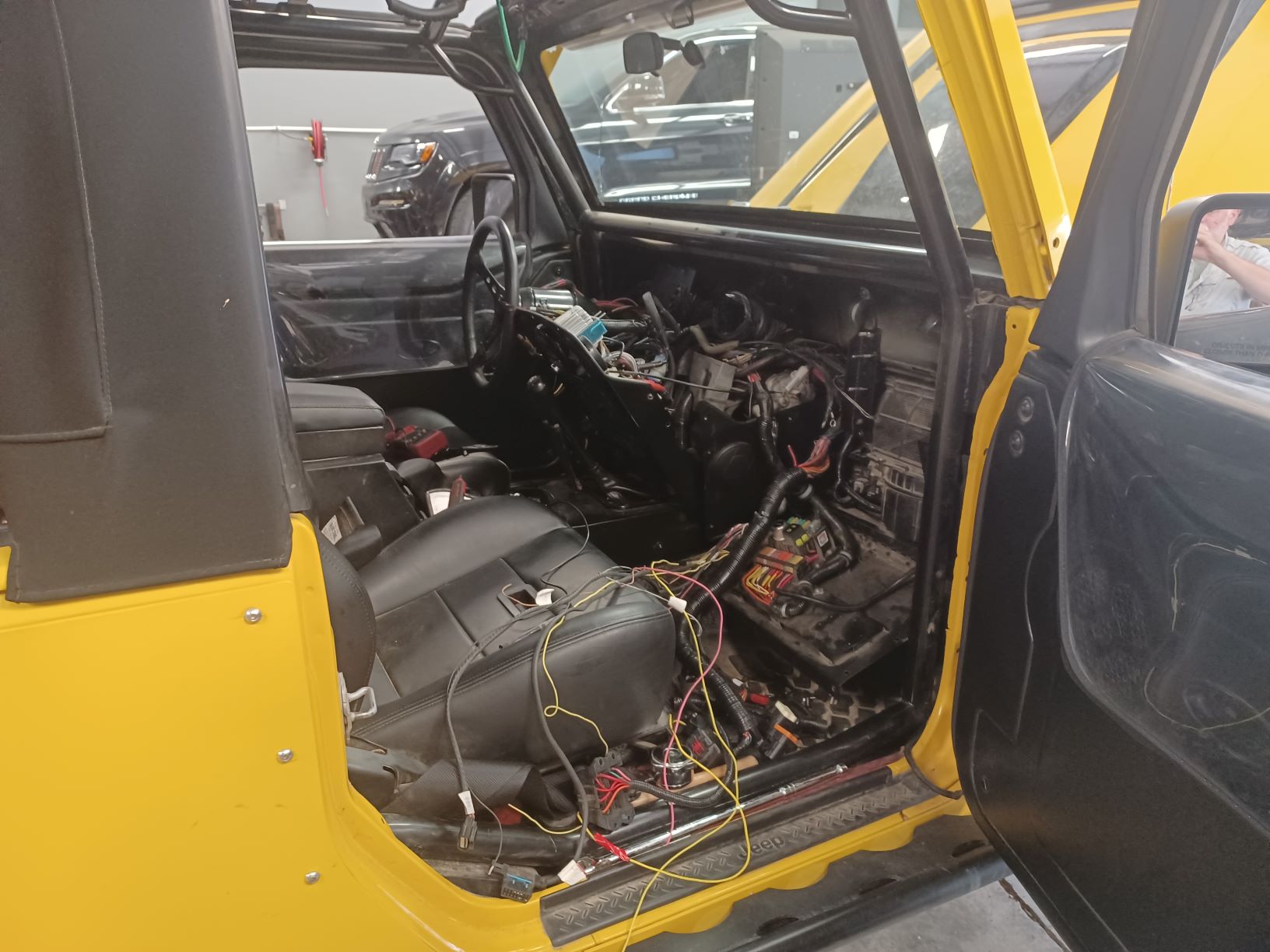 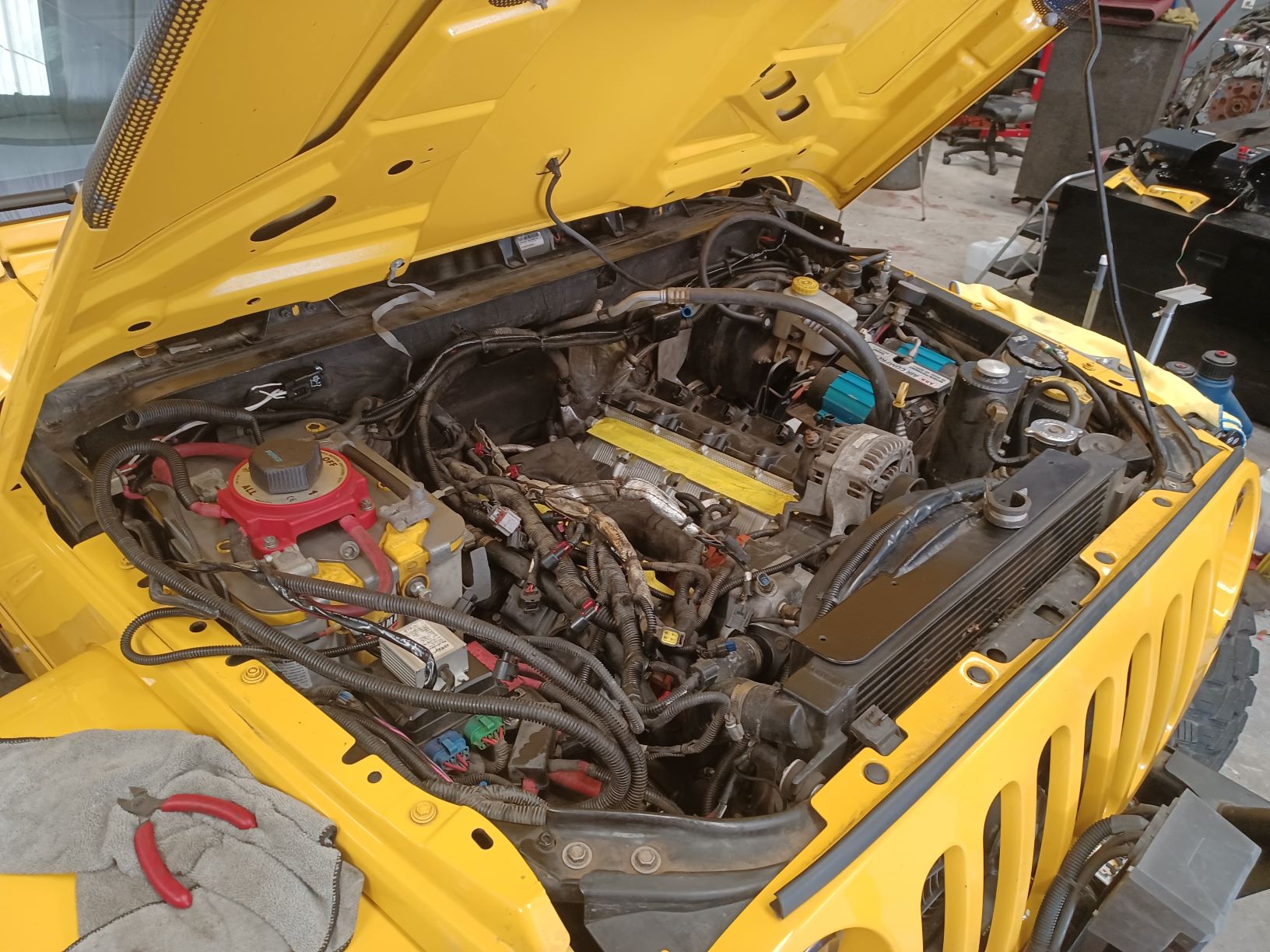 She's been in the shop for over 18 weeks. Once the Holley ECM was installed, they realized it wasn't compatible with the stock alternator. It was some sorta pulse width modulation (PWM) bulls*** that makes the damned alternator into a brain by itself. Also had problems tryin' to tie into the electronic gas pedal.

So we decided to go even further down the hole by orderin' a custom-made alternator and convertin' 'er over to a throttle cable. (Was actu'lly thrilled to hear we could go with a throttle cable so could get some finesse back in my drivin' style.)

Alternator took months to get. Fact'ry housin' but puts out 200 amps at idle and 360 at 1,800 rpm. Built in 1-wire GM regulator that is friendly with the new ECM. Mucho badass unit. 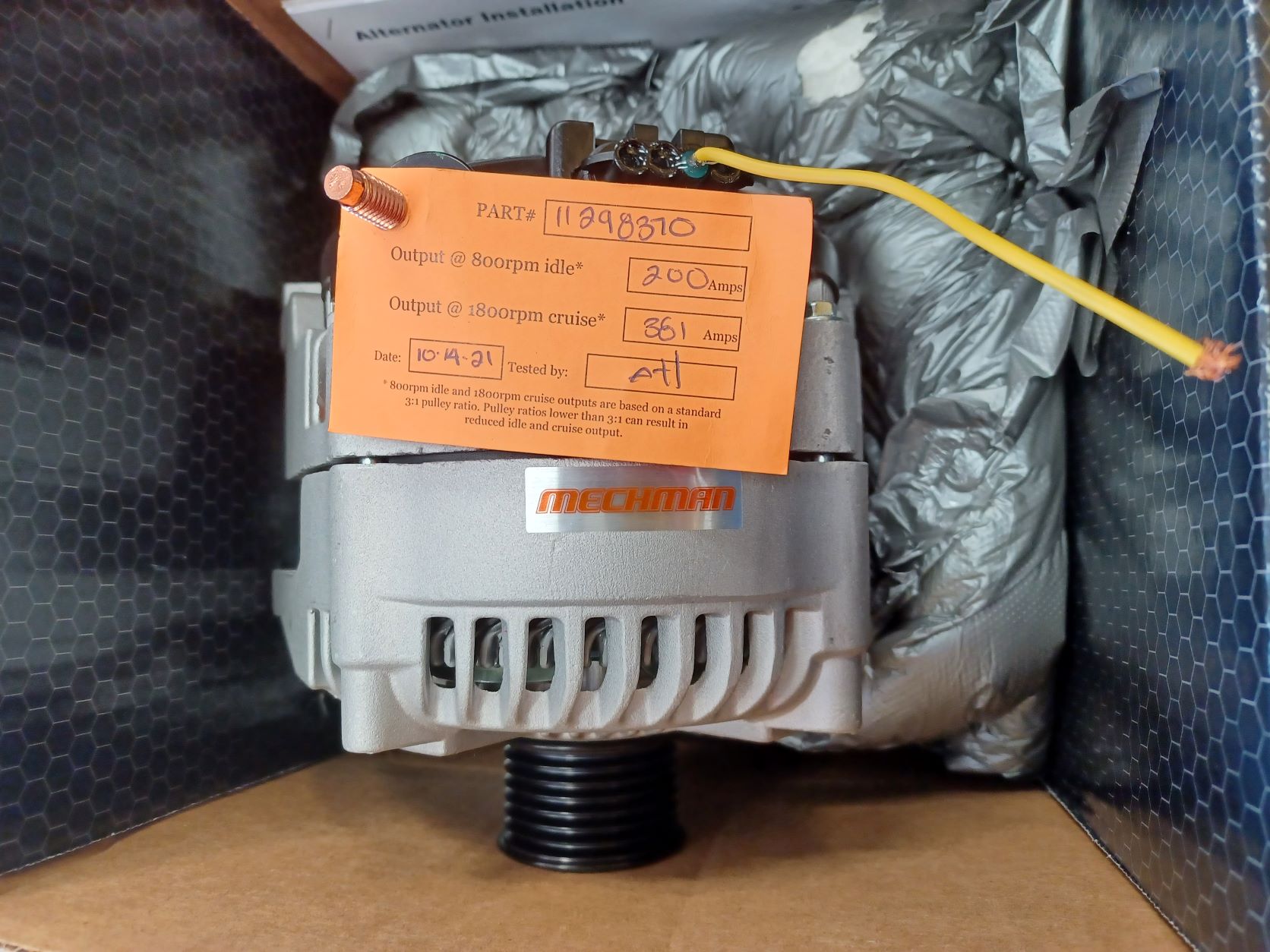 The Holley EFI Sniper deal is what allows the throttle cable ... 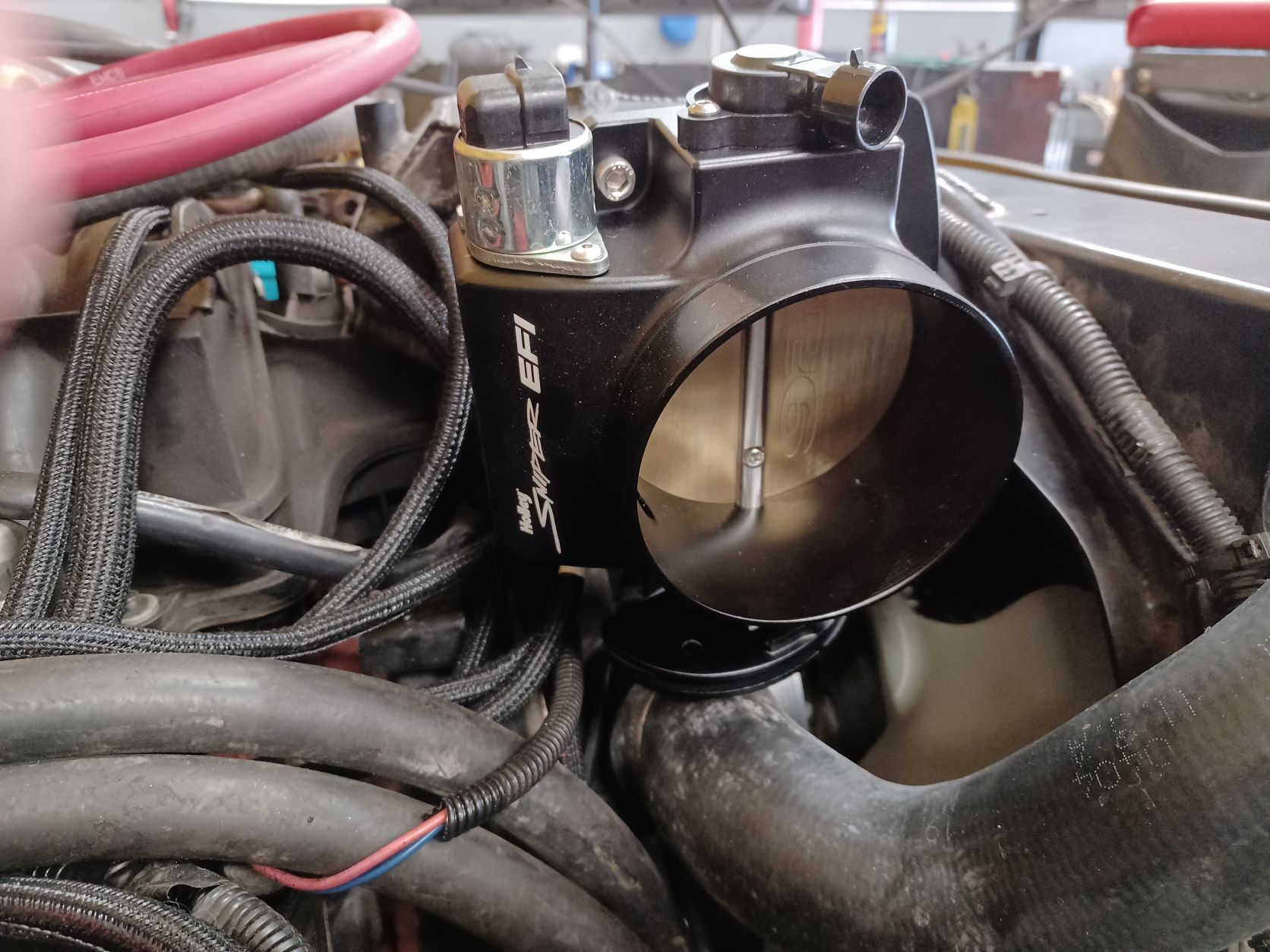 Had to do alot of modificatin' to make 'er fit under the hood. Cable actu'ly comes in on the bottom of the unit. Which made them have to modify the intake on the radiator. And now we needed a new gas pedal. s*** was just snow-ballin' down hill.

The gas pedal proved to be alot more of an issue than anybody wanted. After multiple failures, finally got the firewall modified and a pedal modifed out of a friggin' Chevy van. All good. 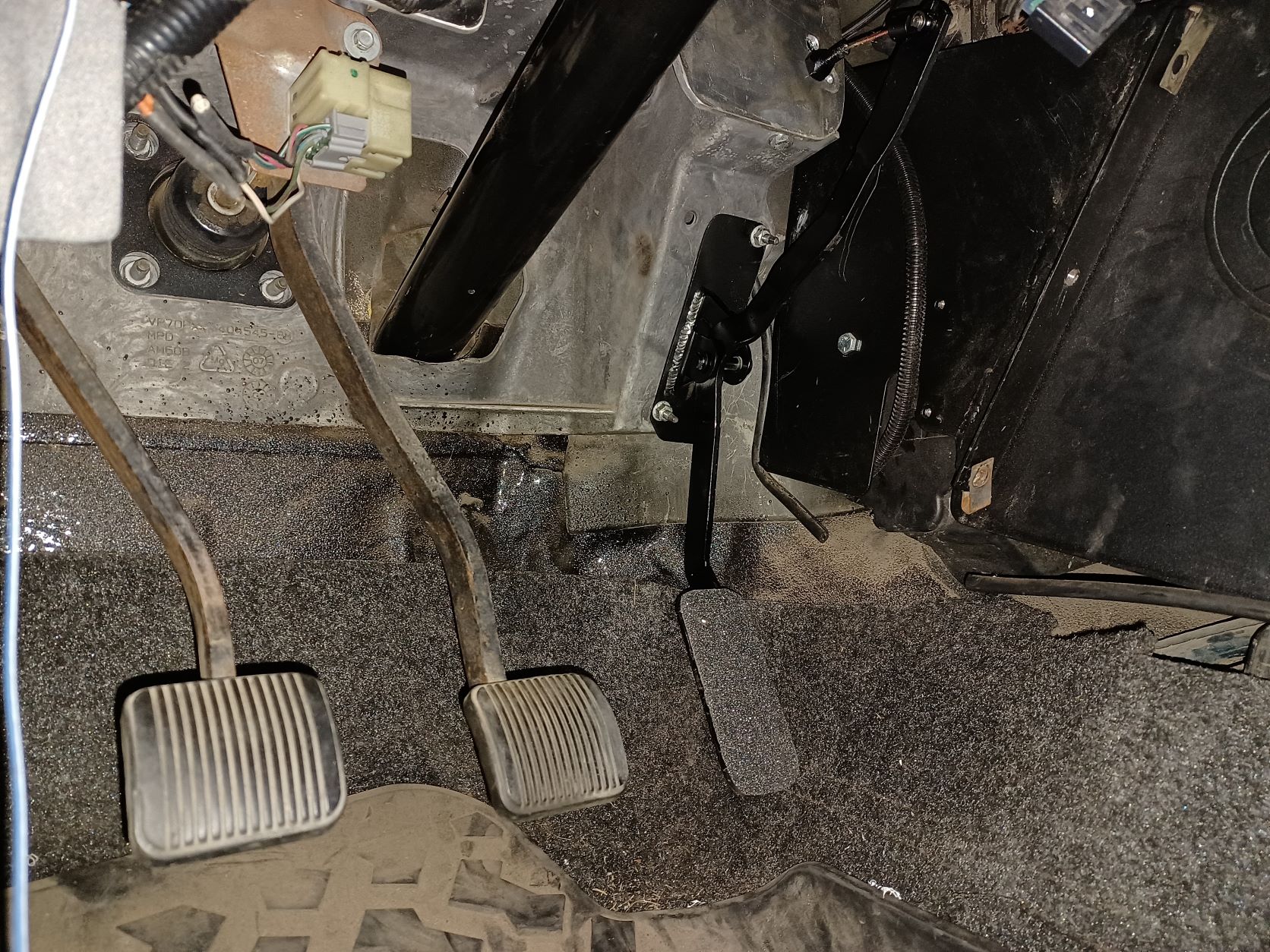 While they was at it, they did a phenomenal job of re-routin' wires, hoses, cables, and s*** under the hood. Really cleaned up nice. 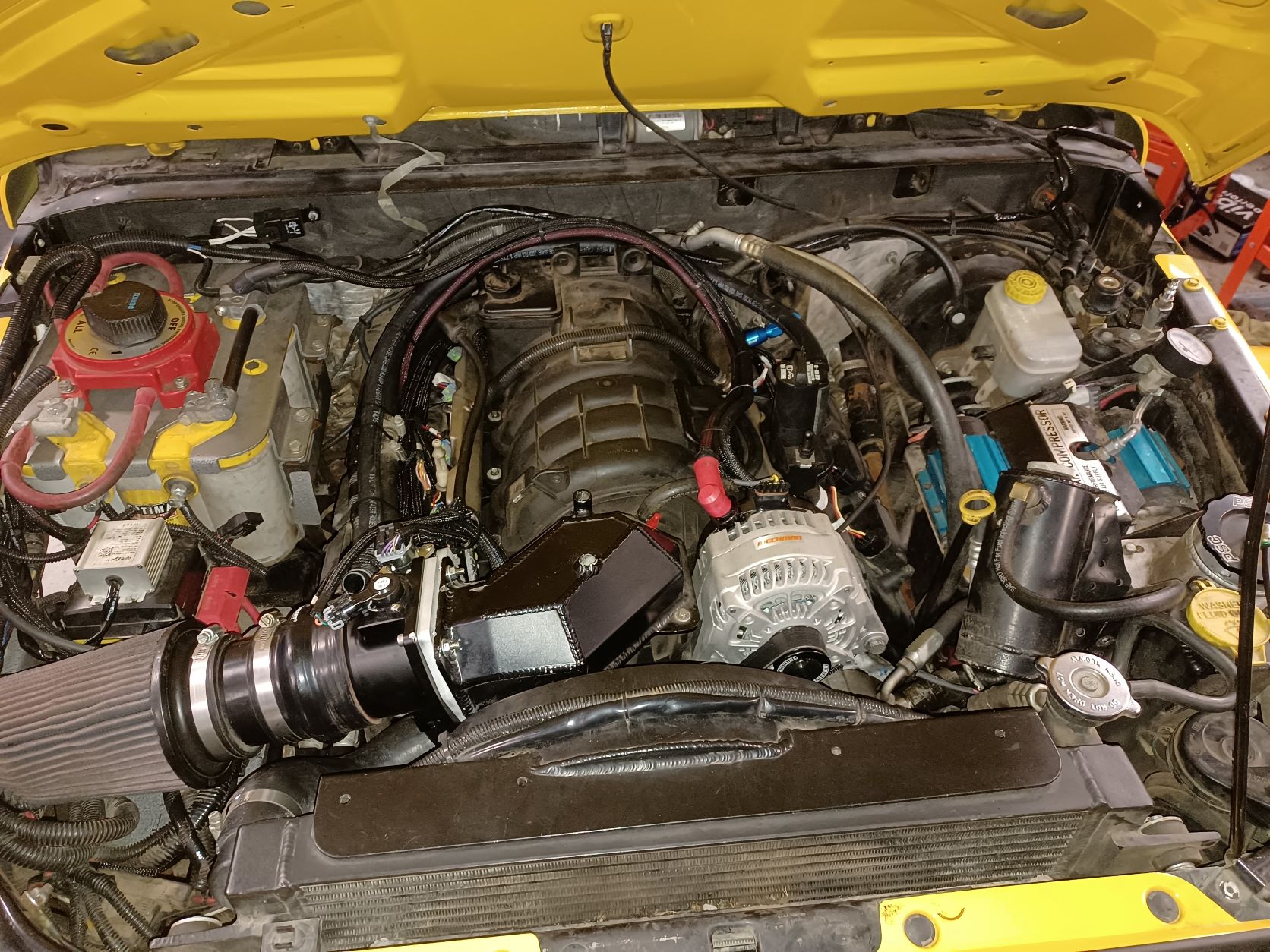 And the mother-f***er actu'ly runs! Got the dash put back together and they started doin' the inital tunin' with the laptop plugged in ... (this was last Thursday) 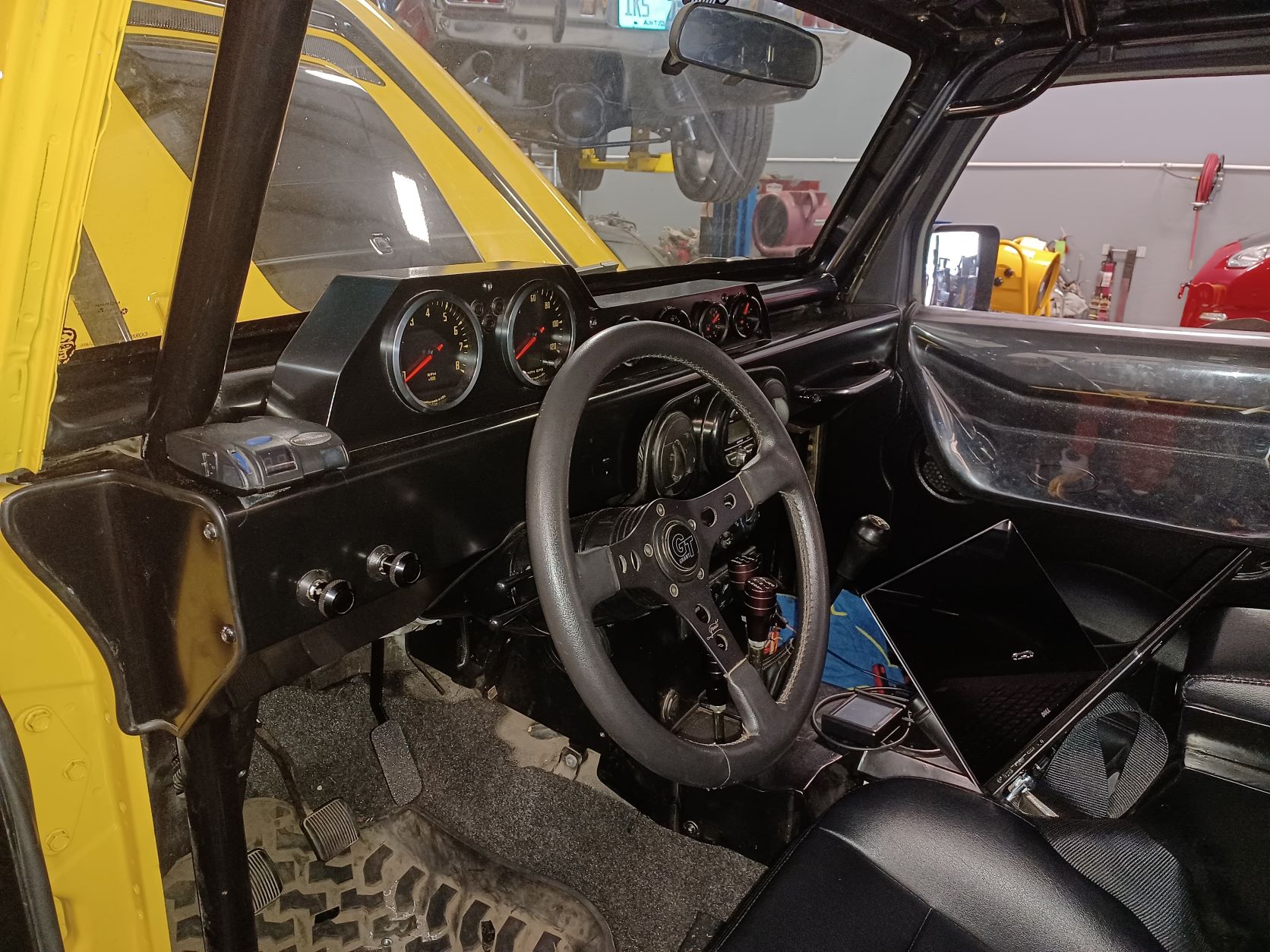 Best news of all is that we now know for a fact that we ain't gotta swap out the cam. I was correct that the new brain cured it ... along with an old-school throttle cable.

Hopefully she goes on the dyno Monday and I'm seriously hopin' to get 'er back for Christmas.

The Mechman alternator came from Mechman. Google is your friend. 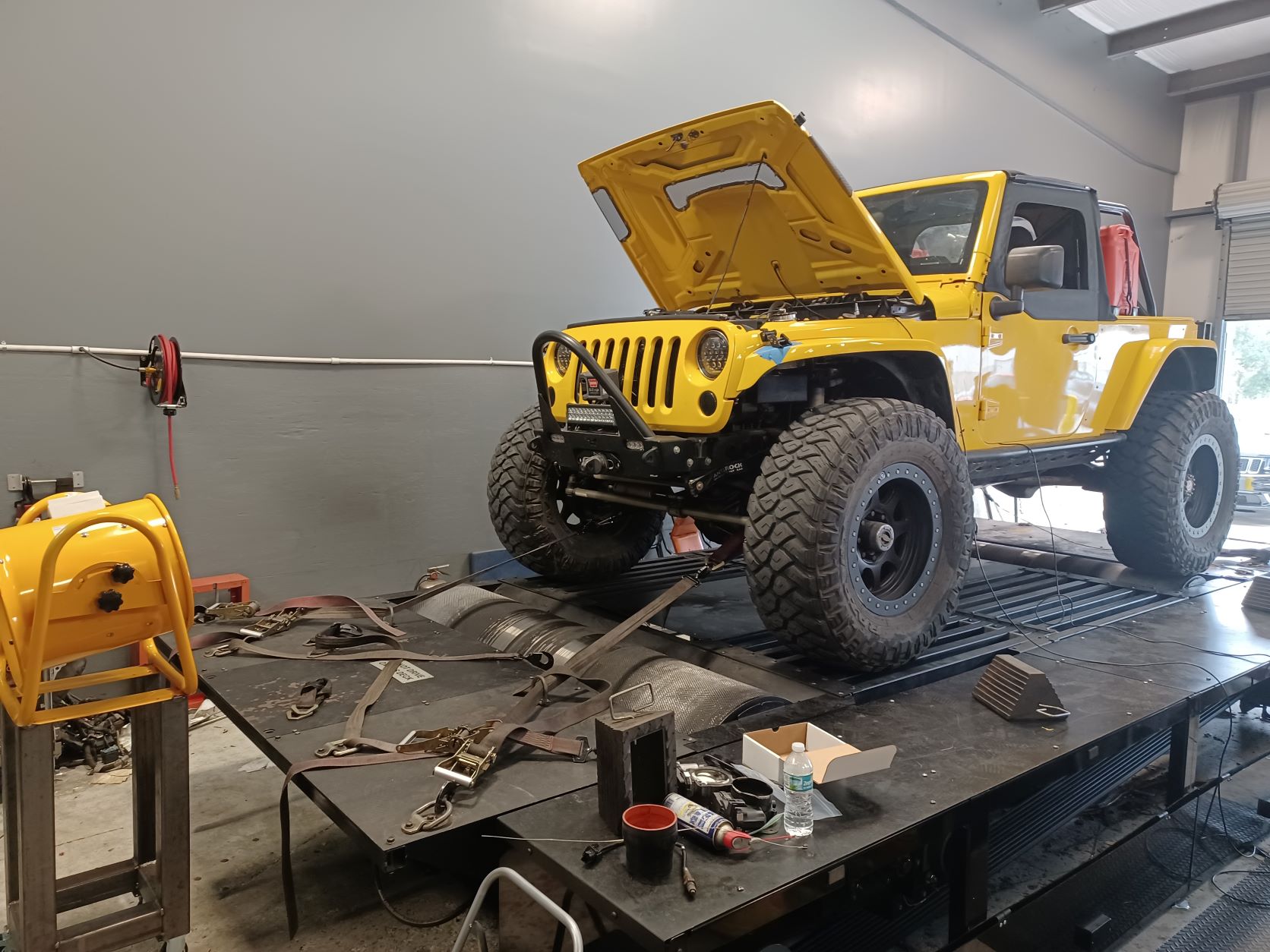 is getting to where it needs to be.

So how active will you be this year when it comes to crawling?

93 Dodge La Paloma(Tow Truck)
I am the Mexican w/ the White Trash! ...and the Redneck/w a nice tan(CLC)!

AC works great. Rewired lightbar so all wiring is internal. Dash all put back together. Ev'rythang works.

Just waitin' for the Tuner Guru to put the final tune on it. Hopefully next week.

So the Tuner Guru had the jeep on the schedule for last Tuesday, the 18th. So last Monday, the fellas went to put some road miles on 'er. By all accounts, they had a large time and couldn't believe how much fun the fawker is to drive. High-fives all around.

They got back to the shop and the shop boy had moved some cars around in the shop so there weren't no room for the jeep. So they hopped out and went to move the cars outta the way ... and the jeep died. Just like someone turned off the key.

Consensus was somethin' else was wrong with the new harness (2 thangs done been corrected already). Plan was to take the harness back out and send it to Holley so they could bench test it.

So they started movin' back'ards and tore 'er apart yet again ... 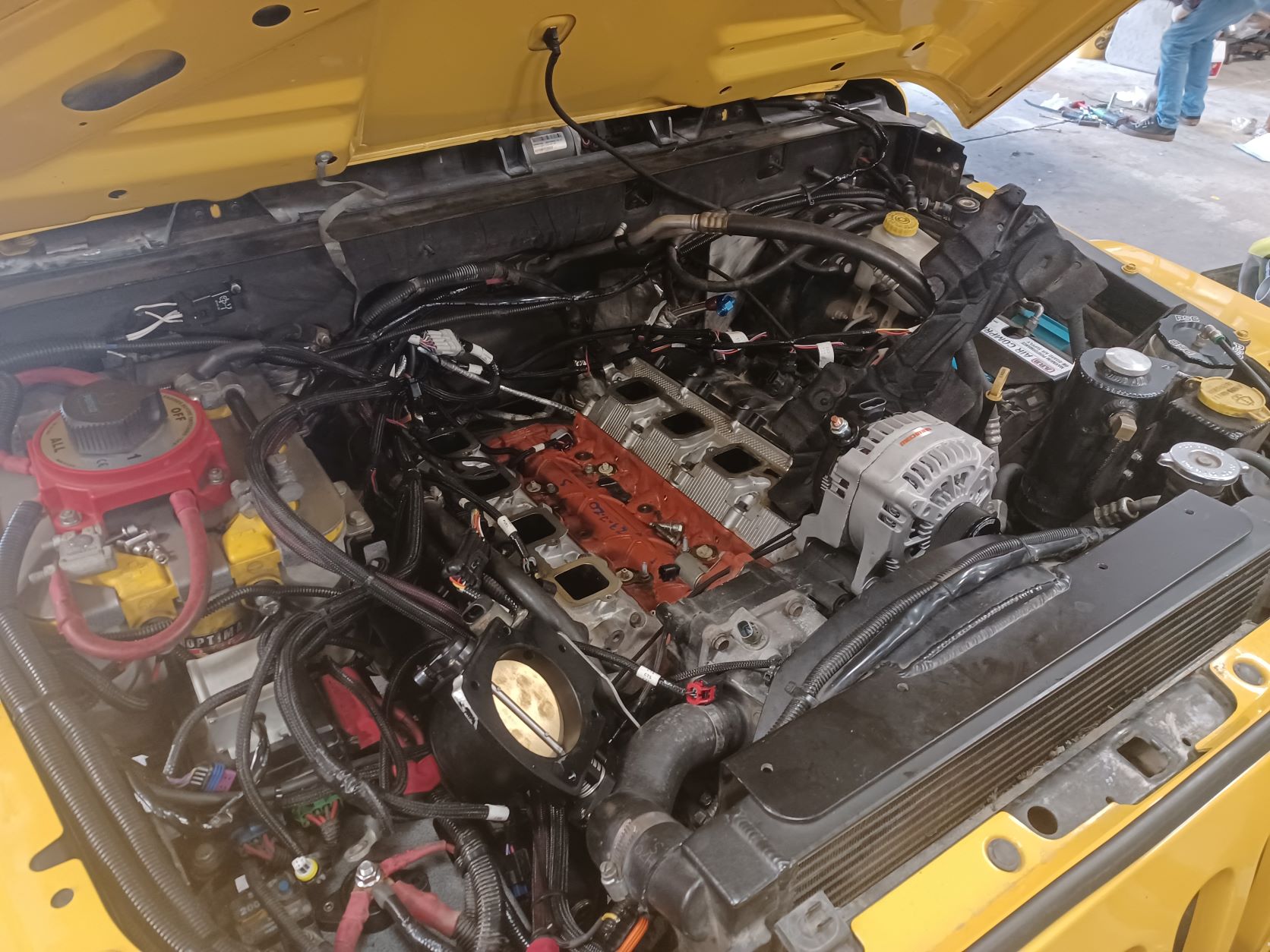 And while they was slap in the middle of yankin' out the damned harness ...


They found the Smokin' Gun. 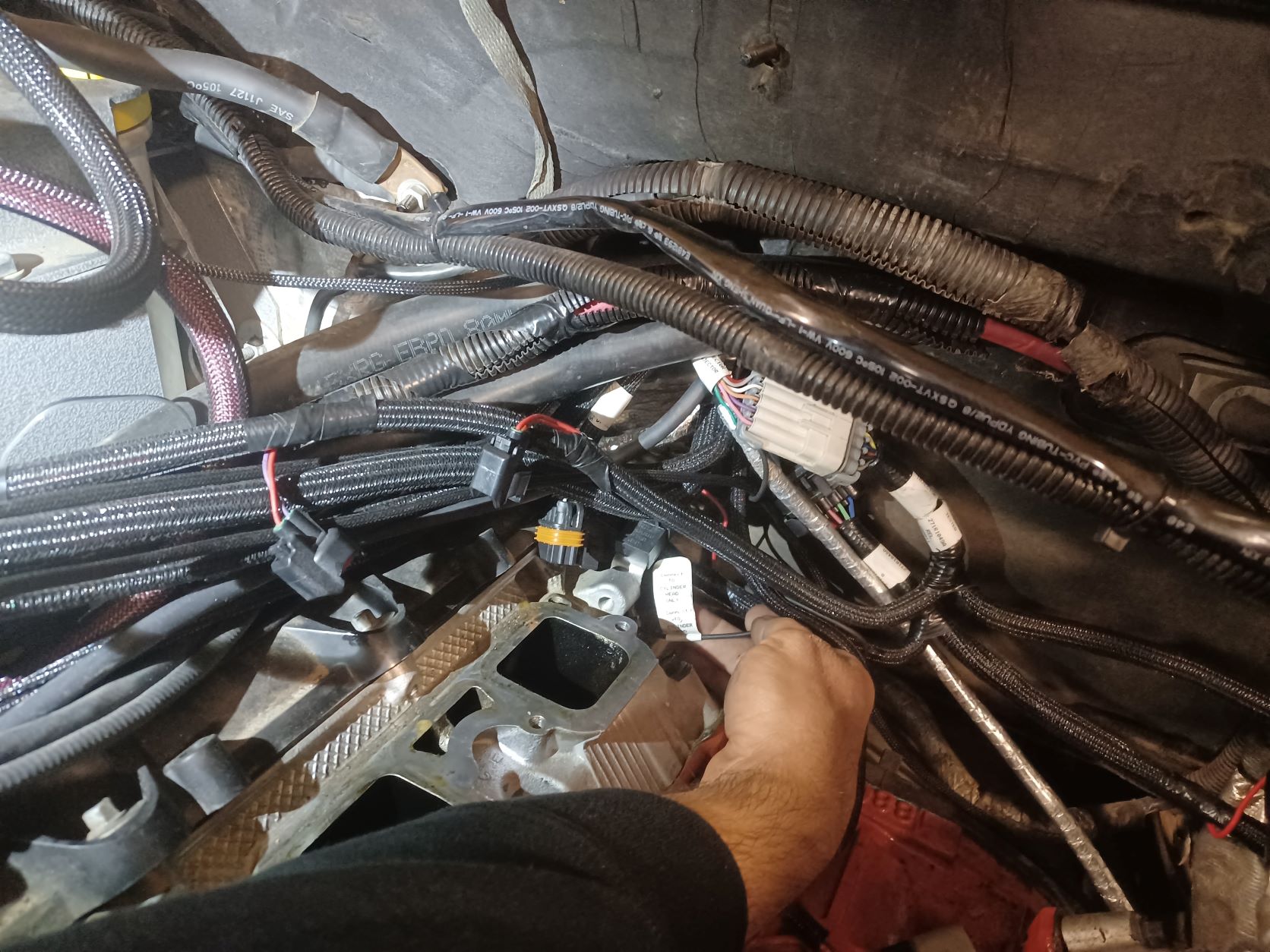 What your lookin' at is the ground wire for the coil packs on the back of the passenger side of the engine.

And it had a bad connection.

Fellas in the shop claim it's the reason for ev'ry sorry-ass problem they've had since they been tryin' to tune 'er after the install.

Puttin' 'er back together this week and hopefully the long awaited visit by the Tuner Guru next week.

Picked 'er up once and drove 'er for a week back and forth to work. Put 'er back in the shop for a short list of stuff to tweak.

Picked 'er up again and all seems right.

See y'all at Katemcy next month. 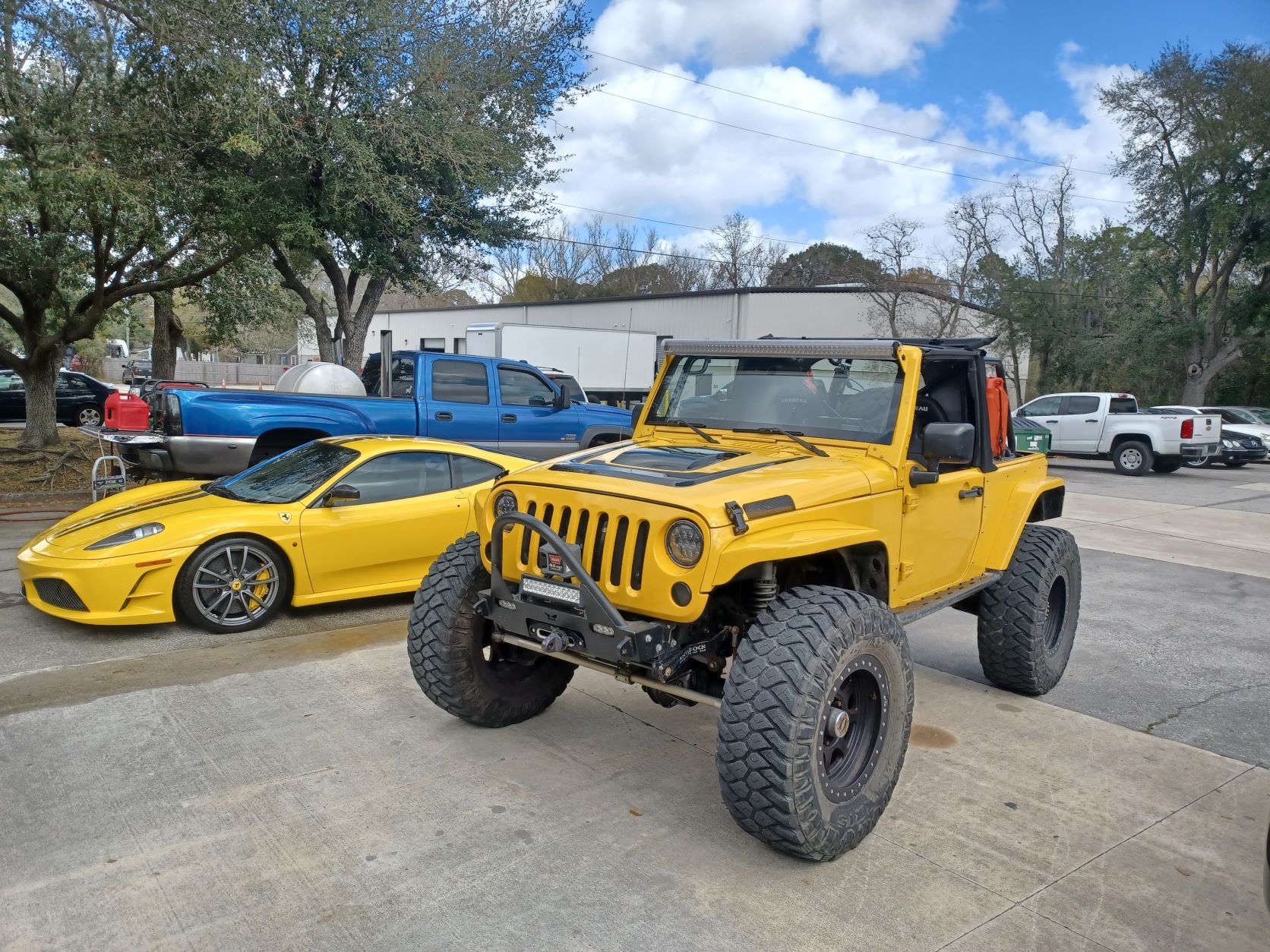