Every time we begin to think that maybe we'll let the Cruiser Trek slip away, something prompts us to reconsider and the next thing you know we are back on the trails, crossing bogs fording rivers and climbing glaciers in the company of another great group of visiting Cruiser Guys (and girls).

Not that that's a bad thing...

Last year we had no real plans to organize a Trek. And to be honest, we didn't. Roger and his crew contacted me and said thst they were coming up to hit the trails in Alaska for a bit no matter what, and asked if we could provide a bit of guidance and support. Of course we said yes.

At the last minute, several of us wound up committed to providing logistical support and technical advice for a television production which us from joining in. Alaska Cruiser Trek 2014 was basically Darrell Wayman leading the Tennessee Nation into the Wild a bit.


After a few contacts from folks from the outside, we were prompted to sit down and consider 2015. We decided that we would take another stab at it and once again the Alaska Cruiser Trek is going to happen.

This is a very advanced notice to those who may be interested in joining us next year. We're still working out details, we just have an overall concept. We're going to try a slightly different approach this year. Instead of a single trip, we are going to attempt to host two or possibly even three trips into the field. This will allow us to offer it over a wider time frame so it hopefully will be easier for visitors to fit it into their schedule for the year. It also allows more of the locals to be involved on the trails without overwhelming the flavor of the event. Additionally it allows us to visit different trails different parts of Alaska which are very different in character and have different appeals.

As I said, this is very advanced notice, and we're still working on all the details. We expect that the overall time frame will be from late June through mid July. Each run into the bush will be about a week with about a week off in between them. This allows for refuel, and refitting and repair in preparation for the next trip. But it is short enough so that if anyone wanted to do both trips they would not have an overage of downtime between the two.

Another change that we have in the works for our next Trek that we expect to have three FZJ80s available to rent to people who are not able to bring their own vehicle up, but still want participate in the Cruiser Trek.


So, there you go... This is official early advance notice for those who might be interested in joining us for the Alaska cruiser Trek 2015. Keep watching here and feel free to contact us for further information.

And I am sure we will be discussing it here as things firm up and we have more info to offer you.

Mark W said:
At the last minute, several of us wound up committed to providing logistical support and technical advice for a television production which us from joining in. Alaska Cruiser Trek 2014 was basically Darrell Wayman leading the Tennessee Nation into the Wild a bit.
..
Click to expand...


Does this mean you won't be adding anything to the abandoned Alaska Cruiser Trek 2014 thread? We'll have to look for it on TV?

Pretty much anything that I could add about what went on during the ACT 2014, would be second hand. I posted that thread because the guys who were involved wanted a place to let people see their pictures and talk about it without opening up the Facebook page that we had at the time that existed primarily for our planning purposes.

I spent a bit over a month, which encompassed the entire time that the Trek was happening, on different trailsin different places. I managed to cross paths with the Trekkers one time, at about 2 in the morning, when I took a side trip and stopped in their camp since we were nearby.

I don't know if the thread for the ACT2014 is abandoned or not. But it does seem that the folks that were there have not had time to post up many pictures. I think some of them have shared a lot of pictures on their personal Facebook pages, but not a lot here.

As for looking for it on TV? Nah...The Cruiser Trek is for real. The stuff on TV is all fake crap.

Even though I know there's no chance of me making a trip like this, I am well looking forward to following it from a land far away.

Once we have real information to put out to everybody, we will as quickly as we can. At the moment a little bit that I can add would be that we anticipate doing one run in what we call the Eureka Highlands, and one run in the area we refer to simply as Tok-Paxson.

We will probably run the Eureka Highlands first, because summer comes there a little bit earlier than it reaches the Tok-Paxson area.

The Eureka Highlands are along the eastern edge of the Talkeetna Mountains. It is a mix of high rolling alpine tundra, some lower heavily forested areas, and sheltered river bottoms that run from the highlands to the lowlands. The primary vehicular challenges in this area will be muddy bogs and marshes and potentially deep fast current river crossings. For the most part it is moderately easy to moderately difficult trail with long distances wide open scenic vistas and potentially a fair bit of wildlife to be seen. Some of the river crossings can be quite deep... Deeper then we can cross if we choose poorly. And some of the mud holes and box can be virtually impossible. We had a suburban on 45 inch tractor tires mired to within thr top two inches of his tires just a couple weeks ago in the middle of one of the trails. Obviously we will avoid these situations (on purpose) during the Trek.

The Tok-Paxson in area lies between the communities of Tok and Paxson, along the southern edge of the eastern end of the Alaska Range. When we get into this area we spend a lot of time following rocky river bottoms and countless crossings of the current. We find ourselves among the glaciers and the granite mountain peaks as well. We normally make a jaunt up at least one glacier. We are always trying to find more of these to include. The water crossings will be the largest routine obstacle we will encounter although there are some areas of mud as well. Not a lot of rock crawling to be had here. At least none that we go looking for. We are still searching for a connection to join two areas of traill here. We had a two or three mile gap between them that prevents us from going in at one end and coming out the other. We may in fact find this connection efore the Trek. We will be keeping our fingers crossed. However it does become less convenient to go in at end of the system and come out a couple hundreds of miles away at the other end if people have left trailers & tow rigs at the original trailhead.
If we make it run into the Tok-Paxson area there is definite potential for some extreme rock crawling if we were to go looking for it.

We will be looking at approximately a week outing in either of these areas. In both instances we will be completely on our own with no outside support and no services whatsoever once we leave the traihead.

We will of course have sat phone and other forms of communication for emergency contact with the outside world. We have upon occasion even had to have parts flown in and dropped off with a Super Cub. Hopefully that will not be the case this time, although it is exciting to watch.

In the past we have often had to have two rigs has support vehicles hauling and are towing fuel. As much as we would like to avoid needing to do this, chances are we will have to have at least one on the trips as well.

In 2010 we brought in 220 gallons of gasoline and if memory serves correctly 60 gallons of diesel. In spite of the fact that every vehicle was required to have at least 36 gallons with them when they left the trailhead, we burned every drop that we had. In fact on the last morning as we broke camp I got the dregs that were left over after everyone else got their share, & I actually ran out of fuel as we hit the pavement. Ratpuke had to flat tow me 5 miles to the Mentasta Roadhouse.
Last edited: Oct 2, 2014

This sounds like sooooo much fun... I am really far away in New York, but hopefully one year I'll be able to make it...

Very interested. We had originally planned Central America at around that time but as details unfold I could be swayed.

We're planning to be in Alaska June 2016 with our truck from the UK as part of a 6 month trip around USA and Canada. So I will be avidly watching this thread

Would love to get up there one day to do this event as well as meet you in person some time Mark. Now, just have to plan the next build...

ACT 2010 was the trip of a lifetime for me, thank you again Mark!

Watching this thread with interest!

The ACT threads are, bar none, my favorite trip threads in this forum. 2015 wont' be my year, but I'm hoping they keep going on for a few more years. Once my boys are a 2-3 years older I dream of bringing them up there with me and particpating.

Sub'd so I can live vicariously through others.

Well, heck, count me in!

2014 was amazing. Everywhere you look is a postcard view. With that said....this journey was no
joke. You better be prepared. 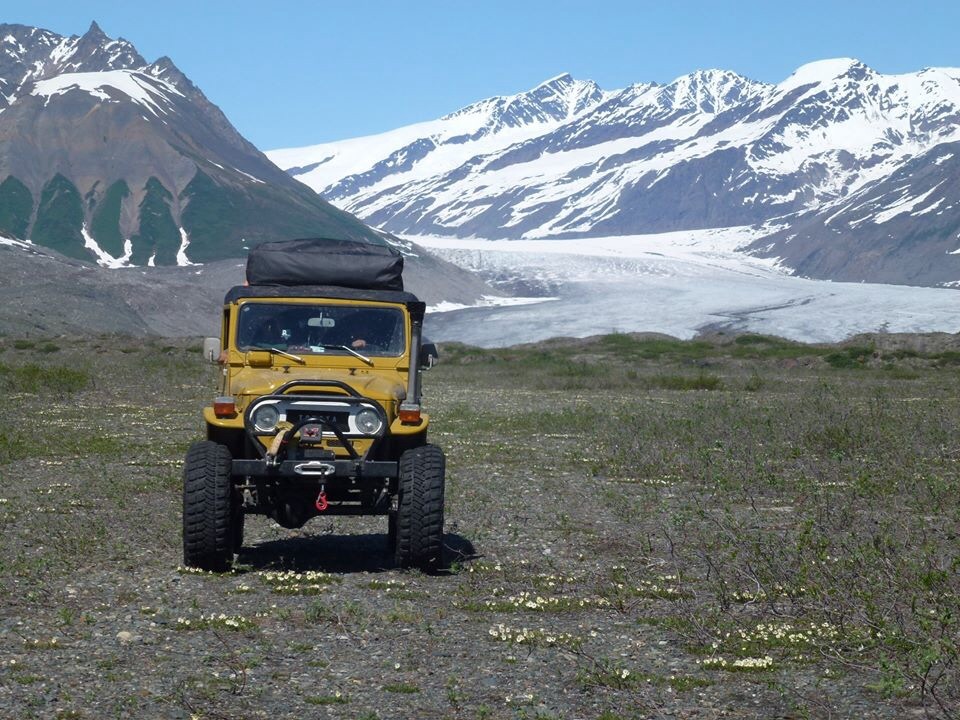 Very interested to hear this will happen, thanks for the advance notice. What do you recommend as the minimum vehicle configuration? Tires/gearing/lockers/etc.

Minimum vehicle requirements on past Trek"s has been 35" mud terrain tires, rear locker, winch, the ability to carry extra fuel (20+ GA). More recently, an air intake snorkel has been added to the list.
You must log in or register to reply here.

Alaska Cruiser Trek 2020? Discussion opportunity/chance for input as the decision time is approaching.