Hello,
Long time lurker coming out of the shadows. I was able to get a killer deal (seemed so anyway) on an isuzu 4jg1 non turbo. I assume it runs and that it was a high hours replacement from a mini excavator or skid steer, that may need a rebuild. Assuming it doesn't, it is an 2004 or 2005 build based on emissions placard ("conforms to 2005 emissions for ..."). Crank is not seized. I assumed this was akin to the 4 bangers they put into the cab over diesel trucks, but research has proven otherwise. I can not find much on the 4jg1, other than it was used state side as an industrial engine, and for some world markets in the 2 and 4 door suvs and small pickups. It has a zexel (bosch?) electronic injection pump. I know that it is on the low side for power and torque given it weighs just shy of 500 lbs and 3.0L, but I would like to throw small set of compounds on it and stuff it into a 1st gen Tacoma. You gotta start somewhere in the world!
Basically I would like to know:
Are there any Isuzu Diesel gurus crazy enough to help out with knowledge and stupid questions??
Can the parts be cobbled together from exiting parts to get enough fuel and air to make it worth compounds?
Can the electronic pump be swapped for a mechanical one? Solely, to make installation easier.
What manual transmissions would mate up easily?
Is this an IDI or DI engine? I have found conflicting answers.
Finally,
Is this a fools, fool of an errand?
Thanks ya'll, let the roasting begin.

Every reference I could find stated it was direct injection.

My two cents would be if it needs rebuild, maybe it's not worth the effort given some of the other draw backs like the industrial application and electronic injection system. Would be better off starting with a known good engine at the very least. So maybe try to compression and leak down test it before going much further. Find a manual and check valve adjustment and such so you know where you're at. Maybe pull the pan and check cylinder bores and big end bearings etc.

@Dougal likes some of the Isuzu motors; maybe he will have some input here.

Hushin AK said:
Can the electronic pump be swapped for a mechanical one? Solely, to make installation easier.
Click to expand...

Hushin AK said:
Is this a fools, fool of an errand?
Click to expand...


Would they remove a good engine from an excavator? I think not. Add a lack of parts in your country and it gets messy.
Pump would need to be looked at in greater detail, some of them can be made to work.
This engine came in a turbo version (4JG1T) with 63kw.
Im not sure about Isuzu industrial engines, but the Toyota variants are often flat out at low rpm because that is where they are tuned to operate efficiently. This makes them unsuitable on hwys.

A lot of work for 48kw at 2500rpm.
The Toyota 3L 2.8 litre non turbo diesel makes 67kw at 2400 and owners often consider that too underpowered in their Hilux, which is basically what the Tacoma would have got if it had of been offered with a diesel.
Compare that to the 2.4 22R petrol engine making 106kw

Thanks guys for the honest feedback, keep it coming. I am sure this is something I should let go and move on, but the idea of compound chargers on a 4 banger diesel in a little pickup just puts a smile on my face.
It pisses me off there was never a legitimate reason for not selling small (by US standards) 4wd, manual transmission trucks with diesel engines in the American market. Ford, Toyota, Isuzu, Nissan.... all have killer options in the world market.
-- soapbox dismounted --

Maybe in a jet boat!

Rare engine, we saw a lot of 4JG2 in the Isuzu bighorn/trooper but not many of the industrial or truck 4JG1. A neighbour had a small 4wd Isuzu truck based campervan with one. He towed with it, but not very fast.

Should be a rock solid little engine. The 4JB1 was the 2.8L predecessor and the 4JH1 shoud be pretty close too. It should be direct injection. Probably doesn't have oil squirters on the pistons but you could tell by pulling off the sump. In the mid 90's many small diesels went from VE mechanical pumps to VP electronic. Often the pump order changed so the injector lines need to be different between mech and elec injection pumps.

I have a commonrail 4JJ1 version in a ute. Still running the same basic block as they did back in the 80's!

Thanks for the feedback Dougal.
Still sitting in the cradle, as I have been busy with my work.
I would really like to get ahold of an FSM. Does anyone know where to source one. I was able to find a fairly comprehensive parts list and associated diagrams, but no FSM.
Thanks

Saw this guy pop up on CL near me. 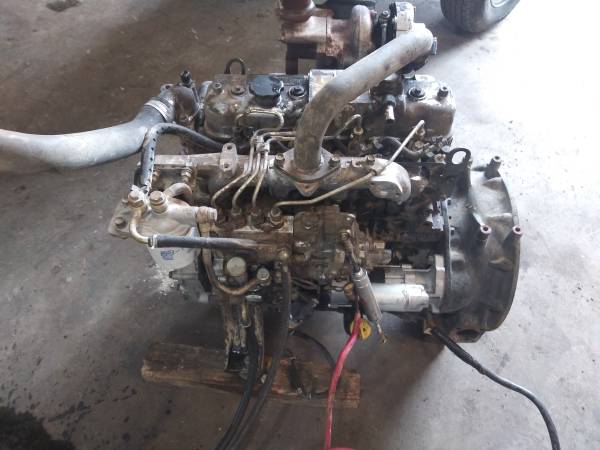