Hi Guys I need a little advise and hoping someone can help,

I have gotten my hands on my old mans 1981 Hj60 as a bit of a project nothing huge just want to make it look respectable again, Its been sitting in dads shed for a while and only run on the odd occasion. When I started taking it out it has had a Overheating issue (Temp Gage going into the red) We found the fan clutch was stuffed so we replaced that along with the thermostat and gave the radiator along with the block multiple flushes using just water also once with flush additive, replaced the hoses as they were crunchy and the radiator cap.

After all that we have managed to get the temp down and holding at around 75% of the white it only creeps past that when you are really pushing it up hill higher speeds etc but it comes down pretty quickly.

Im not really sure what to look at next, from memory it used to sit at about 50% of the white i would really like to see it back to that again im thinking of taking it to a professional but im not sure who it would be best to take it to a Radiator guy or a Diesel mechanic.

Any Advice would be great. Thanks

Two things straight off the bat:

Are you using the right coolant? Diesel motors run hot.

Are you sure the gauge is accurate?
She's been sitting a while.

As Crick says, also for around 10 to 25 dollars buy yourself a laser heat gun, that you can do an easy test, our vehicles are over 25 years old remember

Yeah the gauge could be factor and I have never seen it boil over so ill check that first, I wondering if It would be better just to take it to a radiator guy to run a full diagnosis on it.

You'd be better off with a diesel mechanic because usually the radiator guys are only tech assistants or store owners.

Either way it's going to cost you upward of $100 which may be good thing if they diagnose correctly the first time but that's rarely the case.

Just something to consider...

Overheating is not always caused by bad fan clutches, clogged radiators or malfunctioning thermostats.
The water inlet openings at the junction of the head gasket on the head and block can plug up with a clay like gummy substance that blocks the water flow completely. The slightly ferrous "clay" can grow over time and can seal off coolant openings on the block and head completely.. blocking the flow of coolant to the head.
[Edit - The plugged coolant opening shown below developed in only 5 years.]

Wanna see a pretty picture of a 2F engine? 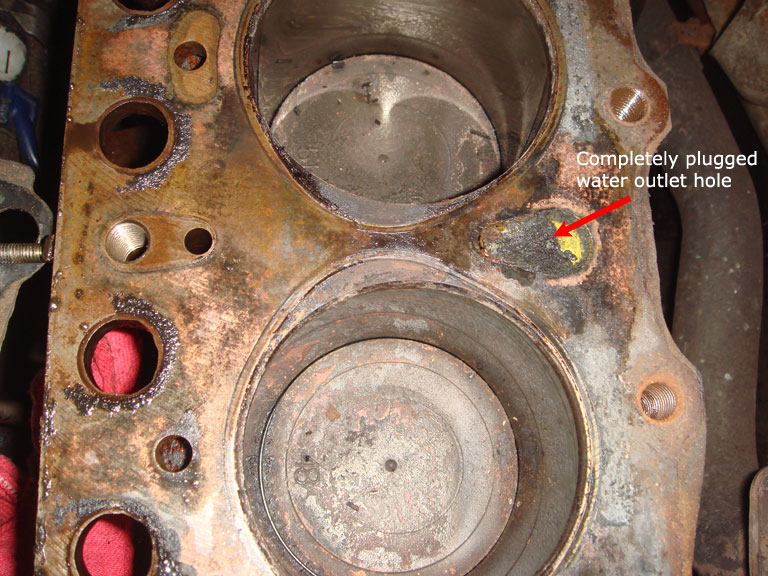 Ok so a little bit more investigation Top hose red hot bottom hose red hot but the radiator is dead cold in the centre and lukewarm around other areas
clogged radiator i assume?
The question now is it best to try get it flushed/rodded by a radiator mob or buy one of those Aluminum jobs for about $260?
Can they generally flush it clean or when its clogged up bad there is nothing they can do, just dont wanna waste money on a flush only to have to replace it anyway. Suggestions?

My advice: fix the OEM radiator with a new coolant block.

Also make sure that there is no head gasket problem: bubble's in the radiator (watch out with a hot engine and the radiator cap!), or a mixture of oil an water.
Is the water pump oke?

Do you have a ohm and voltage meter: check the water gauge

Yeah I'm going to go the opposite advice, can't argue with new and alot quicker and easier.

Yeah i am inclined to go new myself just didnt know if they could give it an acid bath or something that could fix it on the cheap but atleast with new you know its fixed, The rest of the things suggested all seem to be ok no bubbles or water loss or oil in water, water pump seems to be pumping well enough.

Re-coring used to be pretty popular back when a new radiator was >$600 but these days an alloy tank will set you back around $250 and do the job well and if you're really keen a brass/copper job will set you back about $500 and should out last the motor so long as you treat it right.

Cool Thanks for the info Crick

My vote is with new aluminum too. Re-coring copper rads can create damage inside the tubes (according to a radiator shop guy I once talked to).
Also, with the alumi rads so cheap, it is no big deal to replace it again in the future if needed.
I think the days of copper radiators are over.

How fast can a brand new copper radiator deteriorate?
This link shows a new Toyota copper brass radiator after only 5 years (near the beach). It turned into dirt.
I personally would never buy a copper radiator again.

The aluminum power steering oil cooler in my car was over 26 yrs old and still looked pretty good (for 26 yrs old) and none of the fins were crumbling like that copper job.

I think the copper rads are superior for cooling and wear because the material has similar metal properties to the block and it's not such a tricky line to walk to get the right coolant for both, as long as you maintain your vehicle correctly you'll get less issues with a cooper brass.

That said the coolants currently available are pretty broad spectrum in regards to the material that will react with (or not react with) so an alloy radiator is much more attractive these days.
But do not be tricked into thinking the maintenance or inspection interval should be any less because you could be corroding your block sacrificially.

Bottom line get a bigger alloy rad and keep the service up to it and she'll be apples.

azza1984 said:
Yeah i am inclined to go new myself just didnt know if they could give it an acid bath or something that could fix it on the cheap but atleast with new you know its fixed, The rest of the things suggested all seem to be ok no bubbles or water loss or oil in water, water pump seems to be pumping well enough.
Click to expand...


If it was younger vehicle I might say get the radiator pulled apart and have it rodded and patched up,however I did that years ago and found the cores and tanks were so corroded ,it began to leak in other places a few weeks after I got it back.
There are some good aftermarket copies of landcruiser radiators around.

roscoFJ73 said:
... and found the cores and tanks were so corroded ,it began to leak in other places a few weeks after I got it back.
Click to expand...

So the new radiator arrived, I have pulled out the old and went to install the new, the top bolt holes on the new rad are slightly to small for the black vibration seals and the fan shrouds bolt holes line up perfect on one side but only 1 lines up on the other, everything else seems to be in the right place, anyone had this problem?

It's not uncommon, so long as it's not holding and is just the mounting part of the frame just drill out the smaller holes to suit and same with the other side that doesn't line up.
Use your discretion but not everything lines up in the AM world.
You must log in or register to reply here.