How are the stock dual batteries on HDJ81s wired? I saw some dual battery setups on US 80s and they had to use some sort of battery switch and power distribution blocks. Does anybody have wiring diagrams/schematics for HDJ81s?

Also, I seem to read somewhere that since HDJ81s have 24v starters, during cranking, the two batteries are "in series" to give out 24v. Then after engine starts, the two batteries are "in parallel" to give out the usual 12V. How was this feature accomplished? Or this is not the case for my HDJ81? What happens if one battery fails? I will not be able to start my 80 right?

Lastly, on HDJ81s, which is the primary and which is the secondary battery? Primary is the USDS side? Or USPS side?
I saw this pic from wussy_pup. I don't have this sticker on my hood. But because of this cautionary message, I'm thinking that I should advise also my family members who drive our LC80 not to just jumpstart from any battery. But to jumpstart other cars in trouble from the secondary battery. But which is which?

Maybe somebody with JDM80 experience can enlighten me. 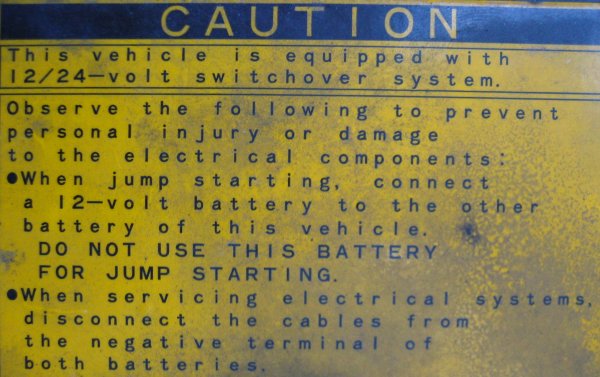 I don't have this label either. Which battery had this?
"Sophie" - '10 Touareg V6 TDI Highline

Passenger/Left side in a RHD JDM 81. 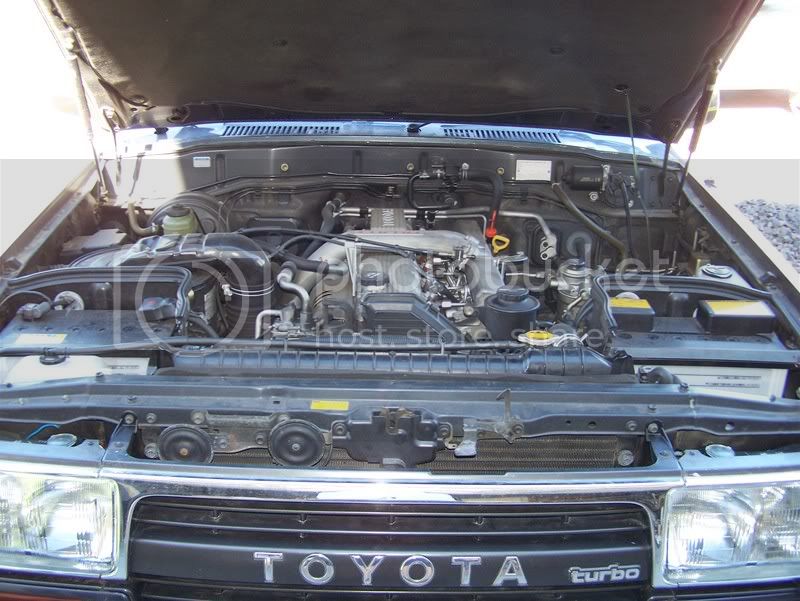 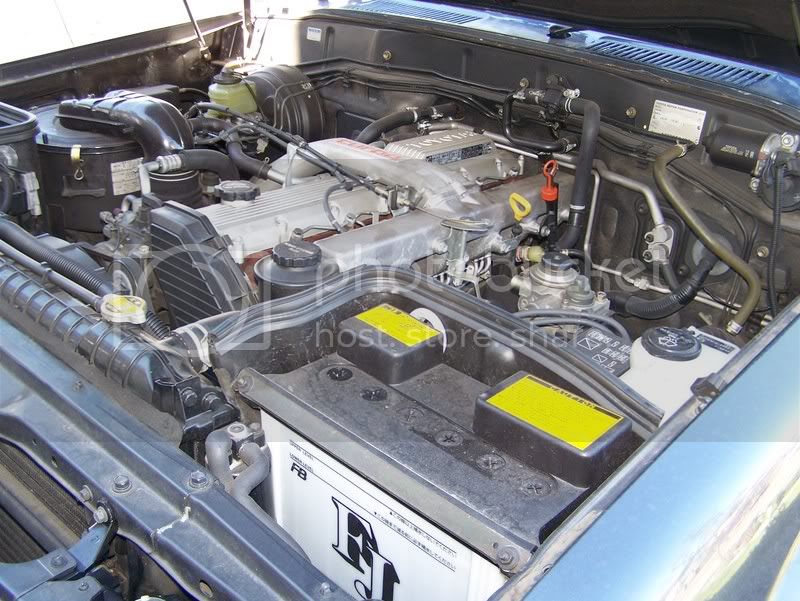 carboncycles;4177967 said:
Hilux, even the advocates for no child left behind would make an exception for you.
Click to expand...

The starter is 24 volt. The alternator is 12 volt. The batteries are connected in parallell, charged and used as a 12 volt system unless you are starting the truck. Everything in the truck uses 12 volt exept the starter itself.

While startin the "under cover" battery on the right side on the pics is connected in series with the other and the 24 volt power is used to run the starter motor. The relay to do this is located between the battery and the fuel filter. There is a black plastic cover covering the connetcors.

This is the reason for the cover on the battery. To prevent users to power aux stuff (radios, lights) from this battery. If you would do so the aux stuff gets 24 volt power while starting. That could easily fry a radio or lightbulps in aux lights.

If jump starting another car with your Cruiser, it really does not matter wich battery you use. But I recommend to use the battery on the right side (in the pics above) to jump start and to power all aux equipment.

The 'main' battery is the one on at the right hand front (or, USPS as you put it). You could jump someone else from there with your engine already on. When running, you are at 12V. Jumping someone else is problematic if you don't know what you are doing/know what the voltage of the other truck is.

You should change both batteries at the same time if you need a battery change. When they sync at start up, the older/weaker one will suck the life out of the new one.

Bump!!!
excuse me as I restart this by a quick question.

considering all the information provided above, is it fair to say that having the 2 batteries the way they’re wired, that you basically have one massive battery (two of them connected in parallel), unless you’re starting the vehicle? If this is correct, this leaves a lot of Ah to run other accessories while camping. thoughts?
"life's possibilities are endless. The only limitations are the ones we create for ourselves from fear of failure".
T

Bumping this, as I'm also interested in the above question from @hectorladron

I have the same rig/setup and have often wondered the same thing.
H

@todddos , yes, that's true. When batteries are wired in parallel you can add up each battery's individual Ah (amp-hours) capacity to get a total capacity. So yes, the two batteries behave as one larger capacity 12v battery in all instances EXCEPT for engaging the starter. As soon as you engage the starter it puts the batteries in series so that it is a 24v battery with the capacity of a single battery (but at 24v rather than 12v).

However, the downfall is that, like others have pointed out, since these batteries are in parallel, if you drain them down too low you won't be able to start your HDJ81 and you may get stranded unless you have a way to charge both batteries somehow. Jump starting a "larger" capacity battery system (i.e. two batteries in parallel) just takes more time, since you are charging a larger capacity system, that's all. You can jump the HDJ81 system by connecting to a single battery, no problem, it just takes longer. Because the batteries are connected in parallel, if you charge one, you're charging the other.

We just went through this recently...we left one of our accessories on in our HDJ81 during some relatively cold weather and we were unable to start our vehicle. Luckily we were at a friend's house and used one of their vehicles to charge one of the batteries and used a battery charger/booster pack to charge the other battery simultaneously. We connected to both batteries simply to speed up the charging/jumping process. Just something to keep in mind if you are thinking of using your HDJ81's battery capacity for things other than starting . The other downfall is that if one of your paralleled batteries goes bad (i.e. a bad cell, etc.), it will drag the other battery down, even if that other battery is healthy.

Remember too that most traditional car batteries are designed for starting (i.e. a short burst of high current), rather than for extended periods of low draw (i.e. a small current over a long time...like an LED, or radio, etc.). So using a typical car battery to run things that should be run using a deep-cycle battery is not ideal, since car batteries are not designed to last very long if they are discharged over any length of time and not recharged immediately. Many folks prefer to have a dedicated "house" battery for running accessories (i.e. deep cycle), while having a "main" or starting battery (i.e. regular car battery) that is designed for starting a vehicle.

We took a different option and left the HDJ81's dual battery in place (i.e. factory setup) and instead got a third deep cycle battery that is charged by solar and is completely separate from the vehicle's stock 12v electrical system (we are running a drawer fridge, charging with USB, and a small 12v fan as our accessories on this independent system). This way if we were to accidentally drain this battery it would only affect what's on the separate system, not take down our vehicle's starting battery. Hope this helps.
Last edited: Dec 24, 2020
1991 Land Cruiser VX - HDJ81 (RHD) w/ 4.2l Turbo Diesel I-6, 5-spd.
T

Thanks @HillCountryTX , appreciate the intel and reply.

One thing I am curious about... Jumpstarting if you wind up with both batteries dead. I was under the impression that because they are in parallel, I could just use a booster on the driver's side (RHD) battery, and that would effectively be charging/jumping both batteries at the same time. Would you really need to jump both batteries simultaneously?

I installed a switch panel into my center console and in doing so, accidentally created a high resistance short circuit that would kill the batteries in about three days. To start the truck all that I had to do was to put the jumper cables on one of the LCs batteries and let the other vehicle charge it up for a while. Both batteries get charged; only not as fast as a single battery would. The truck then starts normally.
Last edited: Dec 24, 2020
1991 HDJ81 Land Cruiser with TJM lockers, 5" lift, 35" Dick Cepek, snorkle, G-Turbo Grunter Extreme, intercooler, twin Viair 485C compressors, 4x4Labs, 3" exhaust
T

I know this has been discussed a bunch already in here, and your explanation lines up with my understanding of the system.

I picked up a Noco GB150 recently to keep in the cab and have some extra juice to charge both batteries simultaneously.

Yes, exactly what Coyomog said! Great explanation. And you are correct, one "charger" or "jump" connection is just fine and will charge both batteries successfully...albeit slower. It just depends on what you have available at the time...in our case we had a booster/jump pack AND another vehicle to charge at the same time. Great questions! I edited my previous post to clarify I love this forum!
1991 Land Cruiser VX - HDJ81 (RHD) w/ 4.2l Turbo Diesel I-6, 5-spd.
C

hi, I have a RHD HDJ81 and I am presently installing a few lights and other low wattage accesories. Can i connect both their Positive and negative wires directly to the poles of the passenger side battery?
or should i route all wiring to the Driver side battery .

Put all accessory wiring to the right hand battery (when facing forward). Drivers side on a rhd vehicle.
J

If @Coyomog is correct it shouldn't matter which battery you run accessories from!

It's hard to tell from the EWD but it does appear based upon the number of contacts that the 12-24v switchover relay is doing this, as Coyhomog indicates: 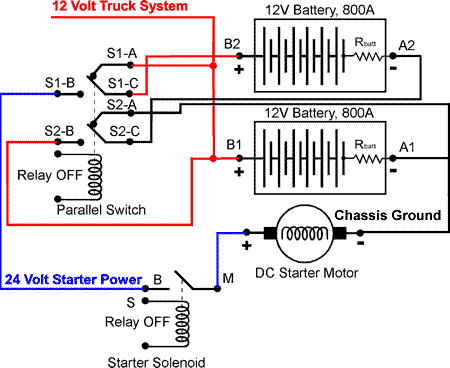 This would mean that only 12V is seen by both batteries constantly which would mean that you could safely run accessories from either battery (no risk of 24V spike on left-hand battery).

I'm running accessory 12V plugs off that battery so this concern is very relevant to me. I'll check with a volt meter during start sometime and verify.

Noting the limitations of the 24v start system and needing an auxiliary battery for my fridge I went over to a 12v starter and wired everything via the Blue Seas VSR.

I modified a 12v starter from the HDJ100 and used that for awhile, when I was happy all worked I fitted the proper 12v starter. Done the mod around 7 years ago, never missed a beat since the install.

The advantages of the 12v system really do outweigh those of the 24v offering.

Remember as an individual you are unique..........just like everyone else
J

Squash said:
Sorry!
If you live in a cold climate the 24v starter is far superior, not even close because the 24v spins a lot faster, when it has to start my money is on 24volts.
I own, 81s, 80s a 75 had the bj70 and have driven many LCs during my days in the Arctic and other underground mines.
If your climate is moderate 12 volt is good and yes I see the point.
Click to expand...


I agree if your in temps of -25 or colder then the 24v system does have the advantage, but it does mean you need a third battery if you are to have a fridge which I do.

Having said that, if your motor is in good condition and set up correctly it should barely make half a turn before it fires and runs.