This is my craziest get your arse stuck in the middle of friggin' nowhere story...and it goes like this:

On my way back from skiing at Whitefish, MT, I took a chance on a shortcut to cut some miles off my trip. The road was obviously not paved under the snow, but well gravelled...for the first 10 miles. Since I was driving before the sun came up, I missed the point where the road turned into a groomed snowmobile/dog sled trail with 4-6ft of snow on each side. I was 5 miles in on this trail when a local on a snowmobile caught up to me and suggested I get the hell outta there. With no place to turn around, I had to back the truck out the entire 5 miles. Well, no problem for the first mile until I got a bad kink in my neck and steered the truck straight into the snowbank.

I hike 5 miles out to the maintained part of the road and found 2 locals cutting firewood and drinking beer. They had an old Ford pickup 4x4 and volunteered to try and get me out. Well, the truck only made it 1/2 mile in until it got stuck. We managed to push, come-along and dig it back out to the main road. In the middle of this episode a local dog sledder came ripping down the trail, screaming at the top of his lungs for us to get off his g'dam trail and that he was going to call the cops and forest service to report my Cruiser stuck in the snow. ($2000 fine and huge recovery bill).

The locals suggested I go into town with them and rent a snowmobile ($100) and try and yank it out. They again volunteered to help if I bought them a case of beer aqnd dinner that night. No problem. So we get out to the truck on the sled with a come along and a Hi-lift jack. Not a chance - broke the come along, buried the jack and dug a crater in the trail with the sled track.

We had dinner and drank @&@&@&@&eloads of cheap beer ($75) and agreed to head up again first thing in the morning with a snowmobile and more gear to try again. After checking into a local hotel ($55), I watched in horror the local TV weather forecast calling for a massive snowstorm that night (6-8"). I managed to crawl into bed and get some sleep until I awoke at 12:30 am to one of the locals helping me knocking on the door. He heard on his police scanner that the cops knew about the stuck cruizer and they were heading up first thing in the morning to ticket it.

I had 6 hours to get the truck out, if I got up now. He also had a buddy waiting in the parking lot with a Bombardier snowcat loaded onto a trailer who would help us get out. The price $300, 4 cases of beer and 4 packs of smokes.

Here I am standing in the parking lot of this hotel in the middle of BF nowhere, in a snowstorm and in my gonch with disbelief at this situation.

An hour later we are at the trail head and have the Bombi unloaded. These guys have already gone thru a 1 1/2 cases of beer and a pack of smokes. After loading shovels, beer, chains and straps on the machine it is 2:00am and we are on the trail to my truck. 3 hours of digging, drinking, swearing and pulling we manage to get the Cruizer out of the snowbank and onto the packed part of the trail. Then I backed it out 4 miles with the Bombi in front just in case.

6:00 am and we are on the main road again. Just in time as we passed the officials heading up to the trail to nab my stupid, tourist arse... Total Bill $600. Lesson Learned: Unless you're a local, stick to the highway. (But I have a Cruizer) 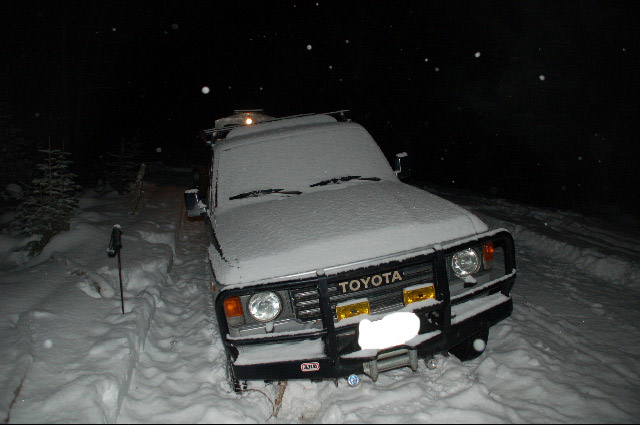 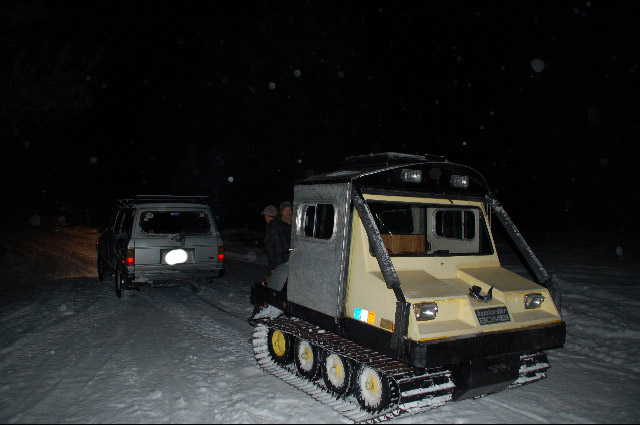 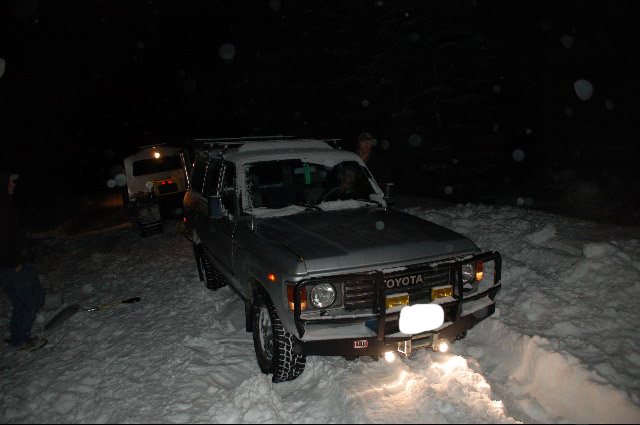 mud sticker in the window

that my friend is a crazy story... Just be glad it wasn't West Virginia and they weren't mumbling something about your pretty mouth... Dueling banjos would have been your theme music in my neck of the woods. Good thing you got out, your co$tly recovery was way less expensive then that ticket would have been.
1974 Toyota FJ40 (sold Jan 27)
1985 Toyota FJ60 two-tone, Safari Rack, OME Heavy,33x9.5's, custom front/rear bumpers, fully sound deadened, Alpine H/U, Rainbow components, dual v12 amps, 12" Type_R, Mot's Lights.

More pics of the recovery and the Redneck Recovery experts.

Thanks to Marlboro's, Bud Lights and a dedicated trio of unemployed rednecks... 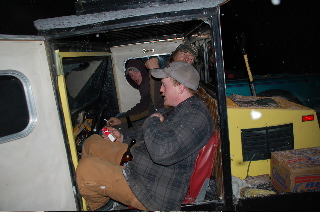 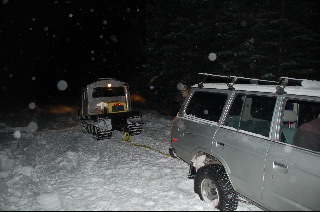 Oh man, I'm sorry but I haven't laughed this hard in a long time. I know it's not funny but it sounds like a similar episode I had gone very, very bad. You showed me how bad mine could have been.

Glad you got out!

A Miller Lite to your getting unstuck

note to self:
add case of cheap beer and a cartoon of smokes to list of recovery gear.

brownbag said:
On my way back from skiing at Whitefish, MT, I took a chance on a shortcut to cut some miles off my trip.
Click to expand...

Is your winch broken?


"I would remind you that extremism in the defense of liberty is no vice. Let me remind you also that moderation in the pursuit of justice is no virtue."
Barry Goldwater

It's not the destination, it's the trip.
Live long, have fun, catch waves.
Steve C.
B

Took the winch off to save gas? You're killin me Smalls.

Poser or somebody needs to make a link to put all these kind of cool stories together in one thread.

CLASSIC!
A carbureted man in a fuel injected world. my website: www.marksoffroad.net
I use the Internet to promote my business; I use a telephone to conduct it.

74fjsemistock said:
Took the winch off to save gas? You're killin me Smalls.
Click to expand...

Would have shaved off about 60 miles.

Got stuck in Texas quick sand (ih8mud) once. 20 minutes of driving and 6 hours of digging jacking, and pulling. Spun a rod bearing getting out of that mess.

Glad your home safe and sound.

A
Drive shaft stuck, what can I do
2