Okay, to do this couple and some other stuff, I finally had to spend the morning and come up to speed on a 2d CAD program QCAD. I'd been using Illustrator and it's not good enough for a working drawing. Here's my first pass for the machine shop and to use in laying out the frame it's all going to sit on. 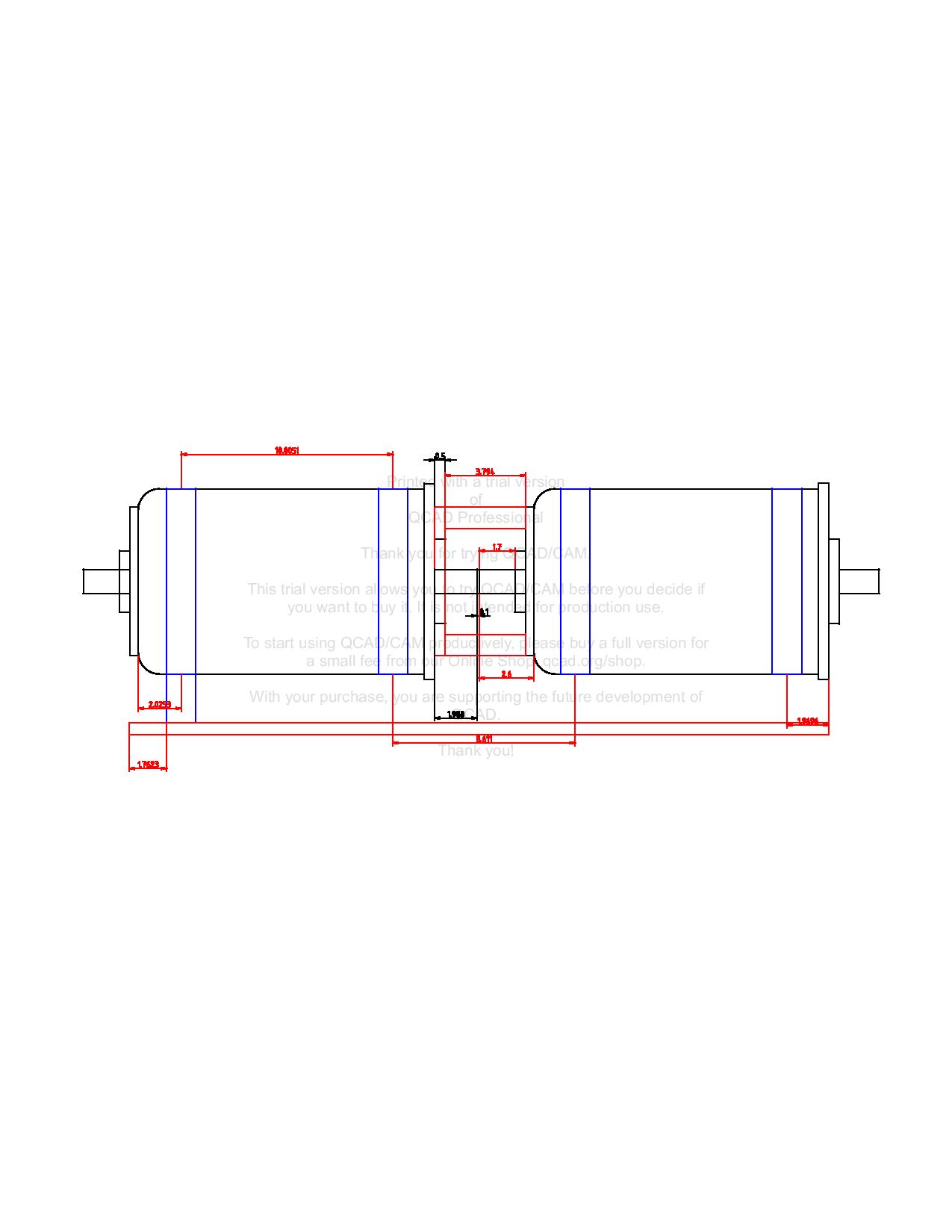 Okay, broke two drill driven rivet nut guns and the old fashioned lever kind arrived today. So, I got the rivet nuts in the motor frame I built. This is my second frame and my second set of holes. I thought about sealing the ends and painting it, but I'm pretty sure it's going to require a lot more changes. But, I've got the first generation made and the motor cradles in place. 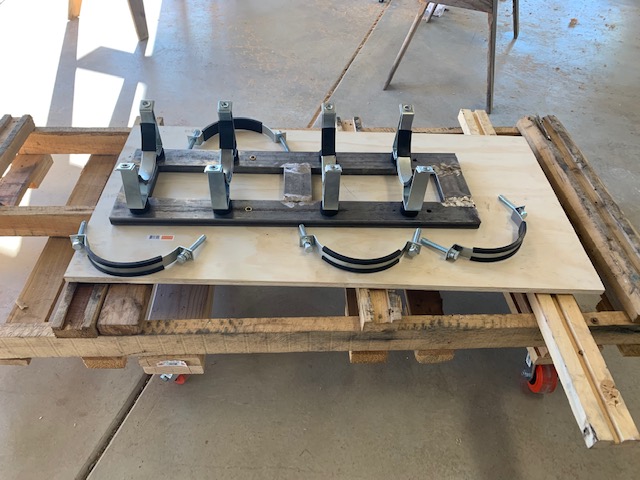 It's on the giant dolly we built that will be able to hold the entire drive train.

Attempted to get the fancy J1772 charger connector to work, and it's not. The plug is complicated. The charger puts out +12 and -12 at 1hz. The BMS is supposed to change that to +9 and -9. That's how they know there's a connection so the charger will turn on the 220v. So, it's hard to figure out what's wrong. I need a scope. Nothing is easy.

Once I get my son to help, we'll move the motors into the cradles. And, if I'm lucky, and they end up in the right spot, I'll put the shaft coupler on and I'll be ready for the parts to couple the two motors together.

I'm still waiting on the frame and body parts from Aqualu. It's not 6 weeks late and in theory it's shipping next week, but they've been saying that since Christmas, and even when it ships, it's going to take a while.

I'm also waiting for CAN EV to send the hub and the Bellhousing adapter.

And I'm waiting for the transmission shop to finish the connecting the NV4500 to the Atlas with a new shaft with the clutch, etc.

Here are the motors close to final location, but - one of them is higher than the other - no idea why. 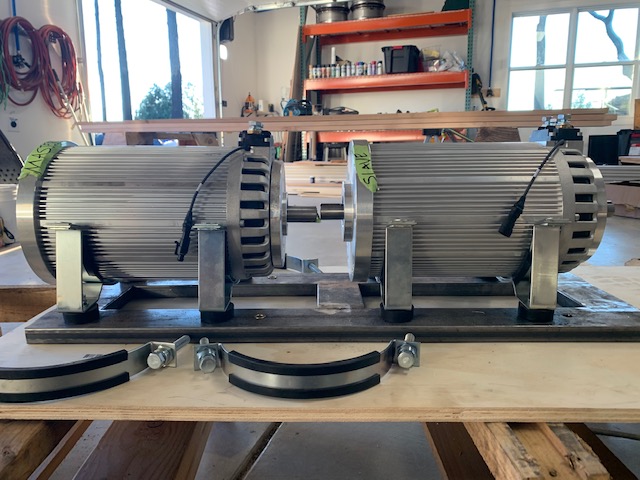 Is that the construction that is going to hold your motors in the car?
If so you might want to build a second frame and use that from the top and brace them together.
That wil fixate the motors in a better way.
C

Could the motors be mounted side by side and geared to drive a common flywheel/gear/shaft? I would think that arrangement would allow for a little more alignment tolerance.
Last edited: Feb 26, 2021

Just my opinion as a fabricator it is probably the factory mounts the stamped mounts can vary a bit. I would probably have the machinist you been talking to fabricate you some horse shoe mounts (you can get 1in wide poly strips to go inside the horse shoe to cushion the clamping force) that way there are precision machined especially if you are running a coupler (Lovejoy should have a sheet saying what is required for mating the two together as far as differential it can take) most only allow .003-.010 differential. Just a thought. Love this thread been watching every step.

Thanks for the input. Once thing I'm wondering is, if you look closely, you'll see if have body mounts under each cradle mount. I starting to think that's a bad idea because it will allow each motor to flex separately causing more misalignment. So, maybe I need to mount them directly to the frame and use traditionally motor mount bushings. Then I can shim each mount point to get the alignment I need. If I have to, I can my fab guy to make me some horseshoes.

I am planning on building an upper frame. I need to as a surface to mount the ABS cover and the top is going to hold the controllers for the motors. Because it has to be removable, it's not going to be very structural, but it will add some stiffness.

You could make a box frame that is bolted together. Then use brackets lined with Delrin or maybe a softer material to fixate the motors to the frame.
I like the creative proces here, keep it comming.

Delrin is a good idea.
T

Why are you trying to build a frame to mount them to and keep alignment? You should have you machinist build the motor adapter like the kit you listed above. It is a much better idea than trying to clamp them down to a frame and keeping them aligned, especially over the heat sinks. And will simplify mounting them to the chassis.

CANEv called. The small block V8 adapter and hun are finally ready. And, in theory the frame and body has left Aqualu. So, very soon I should be putting the trans and transfer case on the motor and giving it a spin.
But I’m really posting to show the pedal bracket I got for the cab (Amazing what the tub doesn’t come with) from a fellow mud member. Yes, the AquaFina bottles were in the box 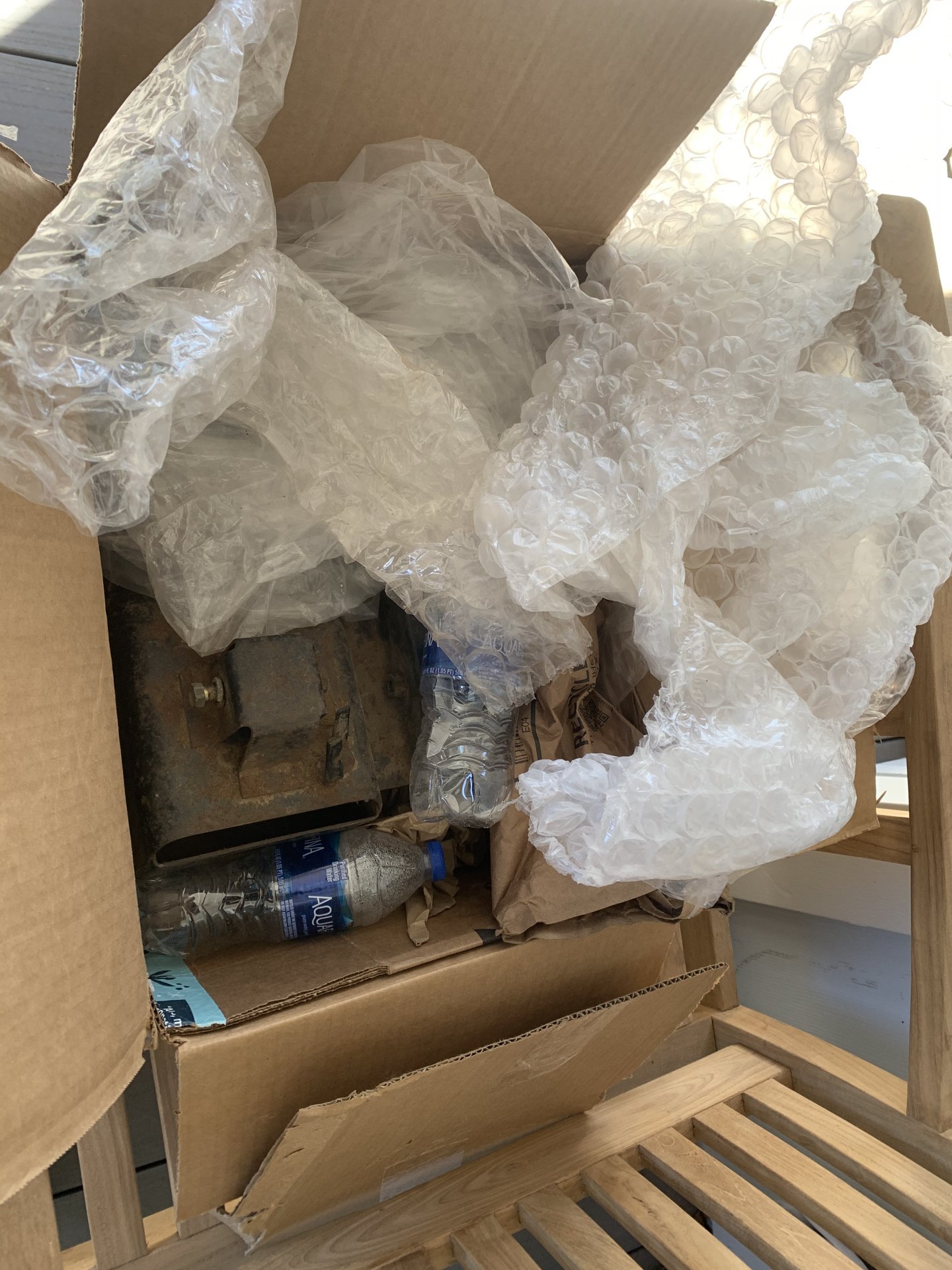 Okay, had to lift the motors in and out a few times and there's just no way to do it by hand. So, I had to do this in the interim. 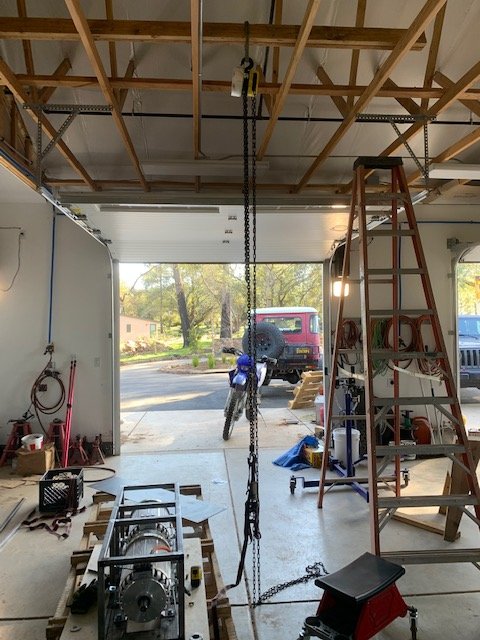 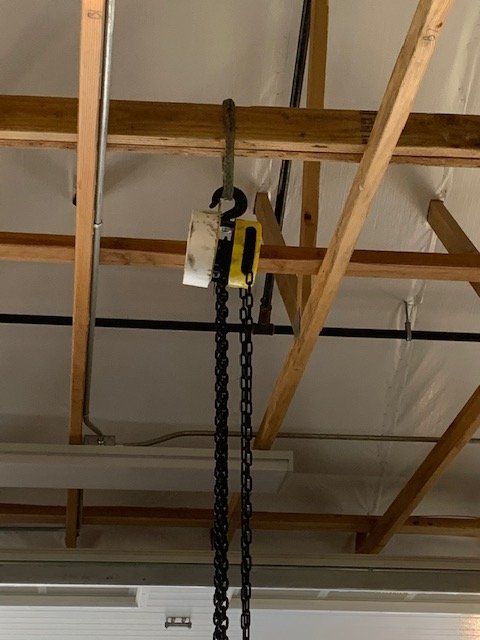 I know, the structural engineers here will go nuts, but it's fine for a couple of hundred pounds.

But I think I'm going to have to seriously beef the ceiling up for when I'm slinging the 2 motors, NV4500 and Atlas into and out of the frame. Been spending a lot of time thinking about how best to reinforce the ceiling.

workingdog said:
Yes, the AquaFina bottles were in the box
Click to expand...

I've done that before. They make great packing material

Go with something like this for hoisting. Minimum height is 2600mm, looks like that would fit in your shop. 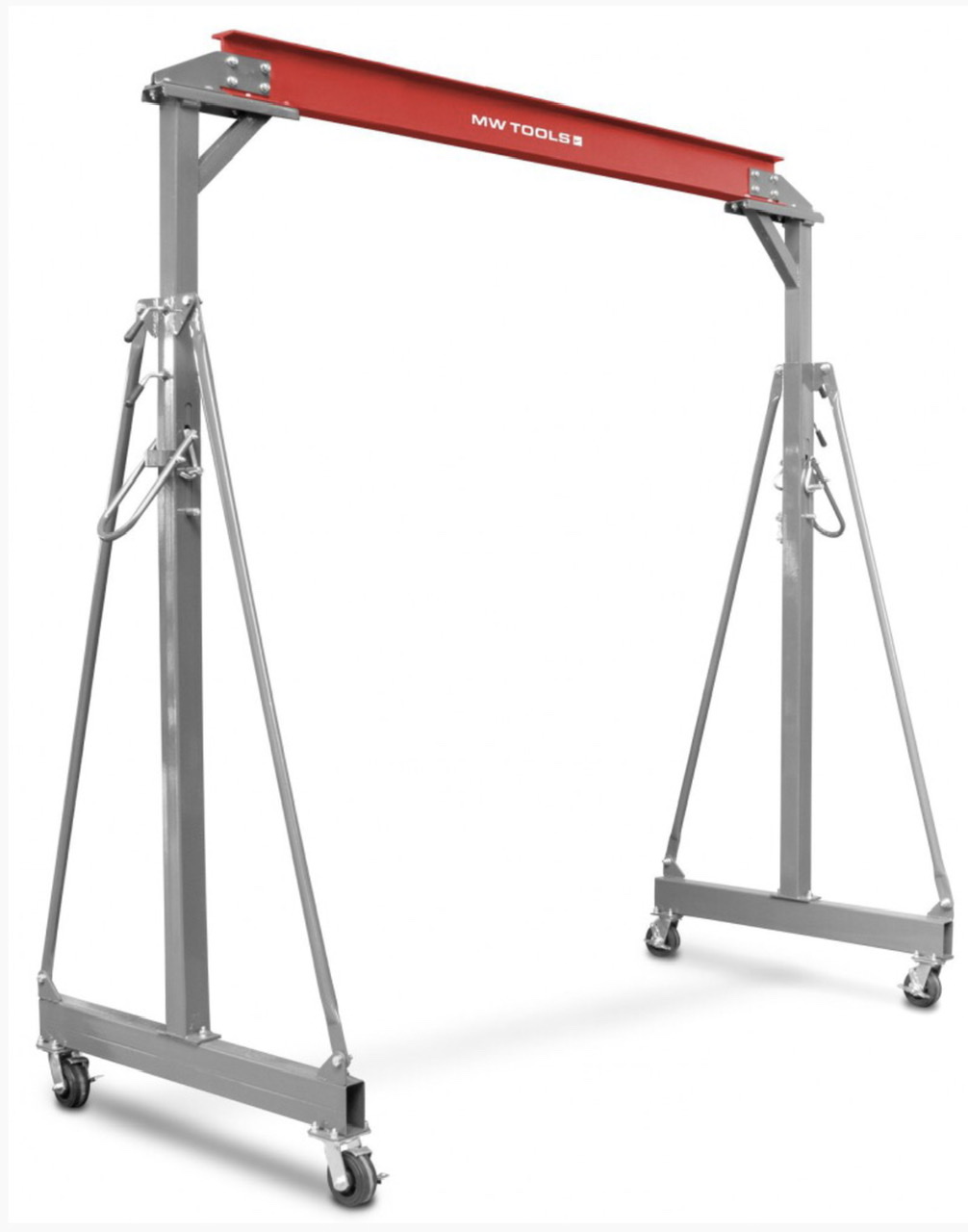 Yes, and then that is in the way all the time. We actually have one outside that's too tall to come in, Maybe we'll cut it down to fit in the door so it can go in and out. However, the ability to walk around whatever you are hoisting with the dang hoist in the way would be huge.

So, Tap plastics made the top for my cage. I think I should have gone with 1/4" abs. I had to shift some of the supports out of the way for the holes for running the high voltage cables and accessing the bolts. And then realized they still aren't in the right place to mount the controllers to. Cleaned up the wires coming out of the controllers into their final bundles. I had tap also made sides for an enclosure that's going to enclose these controllers, but I ordered them too short. So, getting new ones tomorrow. All ABS, going to use MEK to weld the ABS into sides that are permanently mounted to this base with a removable top. We'll see how it wall works. Have some fancy connectors to use to transition from this wiring harness inside the enclosure to the engine bay. The idea is I can take the top off to get at the controllers if I need to plug the lap top in, or can take the entire unit out if I need to do something more substantial. We'll see how it works out.

Heard that the Aqualu stuff shipped this week, so 7 to 10 days. Can EV was about to s*** the bellhousing adapter, but got held up on the support plate for the other end of the motor. So, more delays. It will give me more time to get the motor controller housing buttoned up. 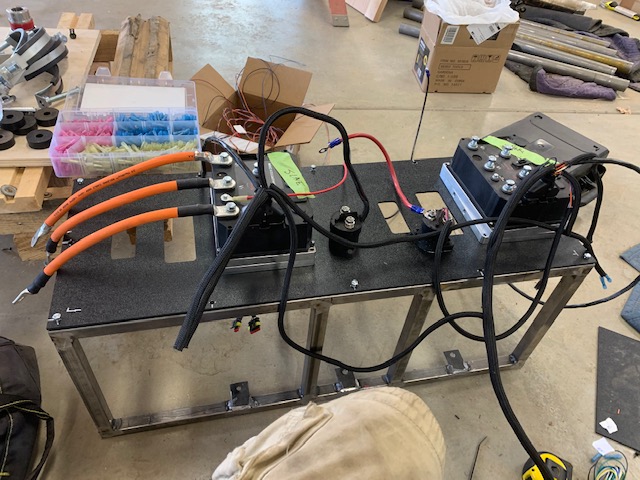 Love the ev stuff, it’s great to see it making its way into the wheeling world.

For connecting the motors I would recommend a flange adapter and coupling to rigidly connect the motors then rubber motor mounts between the motor assembly and chassis. I wouldn’t have rubber isolators under each individual motor.

I would also recommend a gear flex, grid or flexible disc style coupling over the type you purchased. The nylon in those couplings wear over time and end up with significant slack. 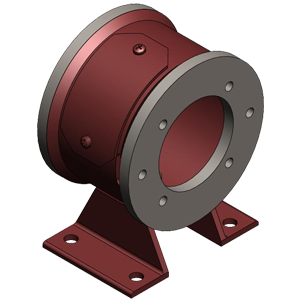 Thanks for the input. There is going to be a rigid connection, it just won't be circular like that. Can you point me at gear flex, grid or flexible disc style coupling? I did not run into them on my search.

No worries, rotating equipment is my jam.

The couplings I mentioned all have essentially a rigid metal connection, designed for high loads and capable of tolerating shock loads. Usually they are seen in heavy industry on gas turbines, large pumps, compressors etc. I found a bunch of photos that should be self explanatory. 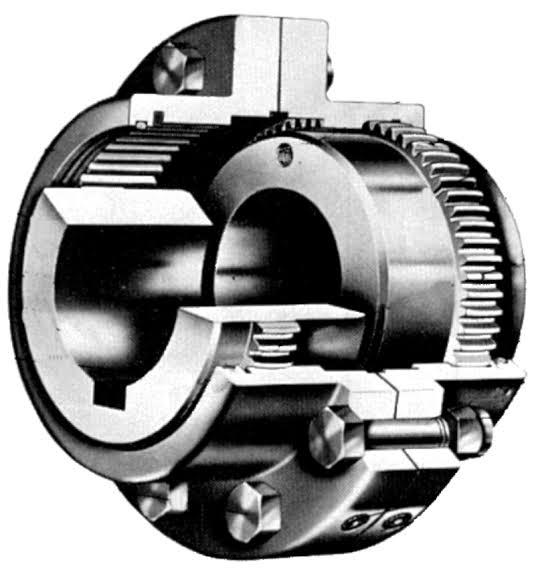 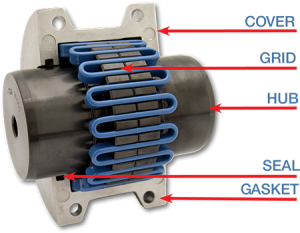 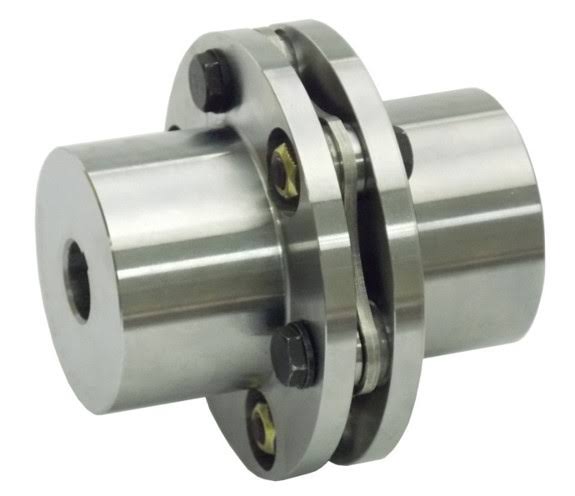 Back to the flange style adapter, the reason I like this arrangement is you can have the flange faces machined so that any angular misalignment is eliminated. You can then easily achieve parallel alignment using a dial indicator or even a straight edge. Once aligned you can then drill a couple of holes in the flanges and insert dowels, this stops it from shifting and means it’s perfectly aligned if you ever need to dismantle it.

If you don’t have it rigidly mounted and well aligned you will end up with significant coupling wear regardless of which style you use. It will also induce vibration and put extra load on the motor bearings leading to increased heat and wear. The tolerance for alignment becomes tighter as speed increases, not sure what your planned speed range was but even at 2000rpm I’d want to see no more than 0.05mm misalignment.

I really appreciate your contributing your expertise. The couple of the kind you talking about that I can find online were low horsepower low rpm. Are use the images you provided to try to find something more in the range.

I am having a flange made for one side, we’re gonna use the existing flange on the other side, and a set of four aluminum rods to span between the two flanges to originally lock the two motors together.
You must log in or register to reply here.

FJ45 Documentation. I have a green one.