Okay, another question for the group. I'm getting an entire Aqualu body. All raw aluminum arriving in a few days or weeks. And I'm no body and paint guy. The body is going to sit in my garage for months while all the rest of the work proceeds and we throw it on a few times to confirm fitment of drivetrain, battery box and suspension. I had assumed I would leave it raw until we had everything put much done, all the holes drilled, everything located, and remove it one last time and send it off to paint.

Now I'm wondering if it's better to just send it off to paint right away, to protect the aluminum as much as possible, and when we are done, just repair any damage done and protect all the cuts made.

I would wait until you’ve finished mock up and have every hole drilled. You can run the tub bare for a long time before you have to worry about corrosion like you would with basic metal.

workingdog said:
Okay, another question for the group. I'm getting an entire Aqualu body. All raw aluminum arriving in a few days or weeks. And I'm no body and paint guy. The body is going to sit in my garage for months while all the rest of the work proceeds and we throw it on a few times to confirm fitment of drivetrain, battery box and suspension. I had assumed I would leave it raw until we had everything put much done, all the holes drilled, everything located, and remove it one last time and send it off to paint.

Now I'm wondering if it's better to just send it off to paint right away, to protect the aluminum as much as possible, and when we are done, just repair any damage done and protect all the cuts made.


Aluminum oxidizes really well. It will have a good protective coat for forever. Paint can wait till you are done.

I hope it‘s ok to not paint it- I’ve been driving mine around raw for 2-3 years!!! In all seriousness, I had a baby shop assure me it was fine, just scuff it real well before paint.

Tub will be fine especially sitting in the shop. I wouldnt paint it because I hate drilling holes in fresh paint i had to pay for I prefer to mock everything up before paint dis assemble then paint and re assemble. Good luck I am going to be watching to see how this turns out...

Okay, some interesting toys have arrived 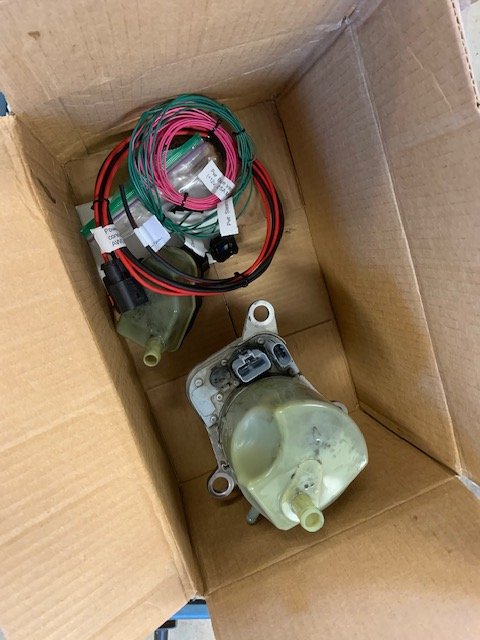 Electric AC compressor (to drive probably a vintage AC). I forgot I also need electric heater element, so I'm going to have to work on that. 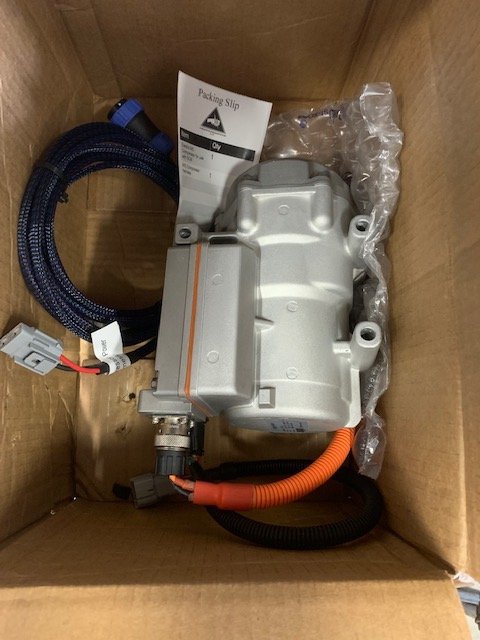 This SCM is the heart of the entire system. Custom made by this kid in Texas. I sure hope it works.
Also in this pick are the charging plug and the Tesla coolant pump and some fittings for the coolant side. 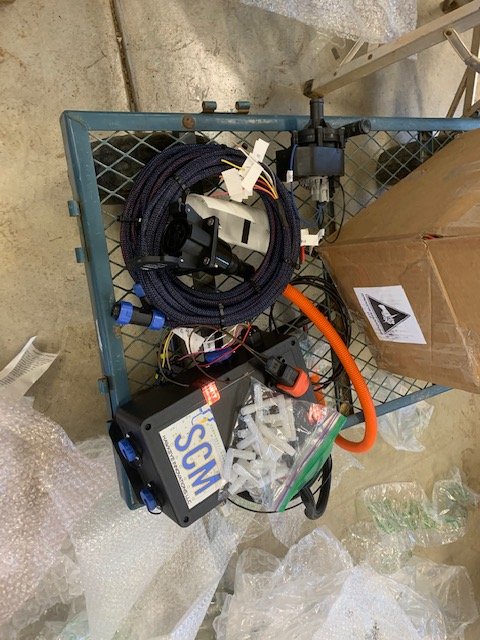 Also but a battery validator specifically for the Orion BMS. So, a very specific tool I really didn't want to buy, but the downside if I wired some of the data lines wrong is too high. This will look at every cell, in batches of 12, and tell me if 1) it's wired right and 2) the health of the cells. Once this is happy, I can plug it into the BMS (Battery Management System) and attempt a charging cycle. 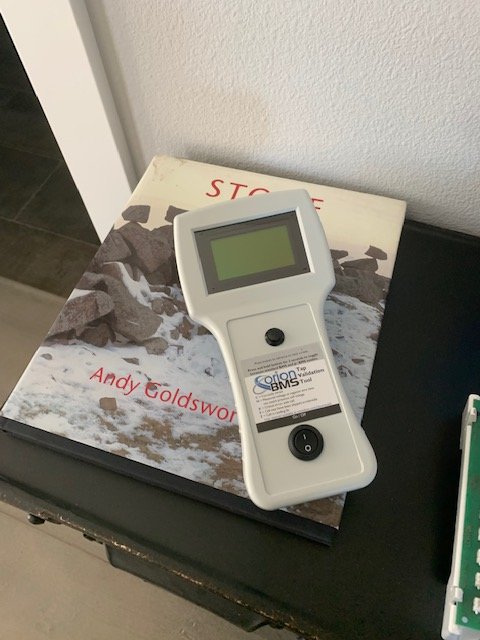 So, in preparation for that, I've created a little bench test station in my shop away from the welder and the lift. plywood table on top of hte battery box. You can see the mess of colored wires on the right, 6 cell taps, 2 temp sensor, one 'reference' (it's not a ground) for each battery.

I've also got busbars and really big cable for actually connecting the batteries together. Basic rubber gloves arriving tomorrow and I'm going connecting the batters and building cables for the bench test. I you don't hear from me in a week, it's because I'm nothing but a pile of ash on the shop floor. 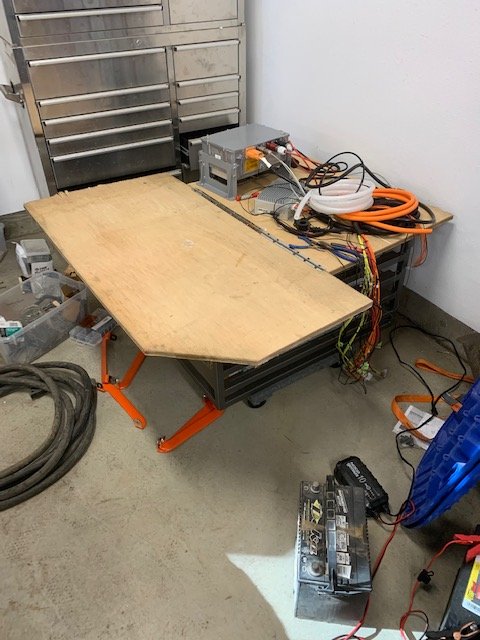 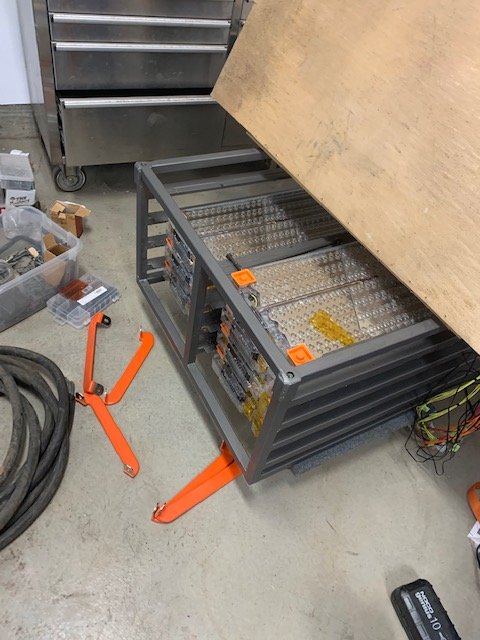 Also, ready to build the coolant manifold on the back side as well.

Are you going to mount the battery frame/pack on soft mounts? I don't know how sensitive those batteries are to shock and vibe.

I haven't got that far yet, but I had kind of assumed they'd be on body mount pucks.

Could you run a heater line to the battery coolant lines so you wouldn’t have to install an electric heater?

I don't think the batteries are reliably and consistently hot enough - but I'm not sure.

Okay, yet another learning experience. I put the 5 bus bars and built my first cable with my new Harbor Freight hydraulic crimping tool - so all the the batteries are together. And I got all the cell tap connectors wired up to the Orion BMS and plugged them into the Stealth EV boards in each battery. And I bought the $300+ tester for the Orion before I plugged it into the BMS and blew it up, and instant error.

So, it never occurred to me, until I stopped and thought about it, that it mattered which battery was designated #1. I knew they had to be in order, but the BMS needs to see them in ascending positive voltage and I put them in backwards. So, now I have to take all the busbars off again - which is a major pain due to how close together the batteries are - pull all the boards off - because you can't get to the connector on the back of the board - what? And then put them back on in the reverse order and try it again. 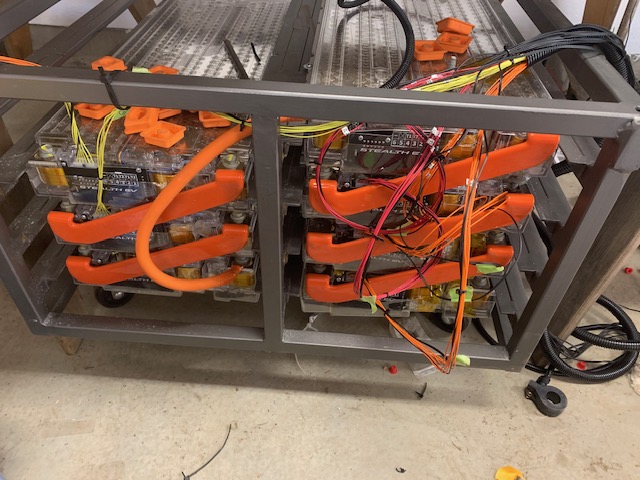 More stuff showed up as well. This little LCD display and no case. Not sure why it's so small, but it's supposed to tell me everything that's going across the CAN bus. AC control for electric AC.

Got the coolant manifold done on the other side of the batteries. 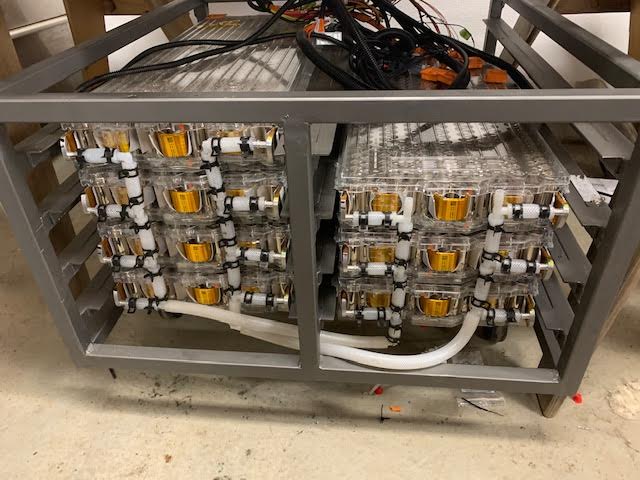 I hope the hose clamps are strong enough

Next, assemble the BMS, the charger and the SCM and attempt a charge cycle.

Okay, so, bench testing the EV portion of the rig. Step one: Establish communication via CANbus with battery management system and start a charge cycle (SCM, BMS, Charger, display, battery, tesla batteries, 12v battery). Step Two. Add the Hyper 9 controllers and the Hyper 9 motors and get a motor to spin.

So, Here's my bench test for step one. 12v and high voltage is all connected, need to get CANbus operational and the Orion BMS talking to the laptop. 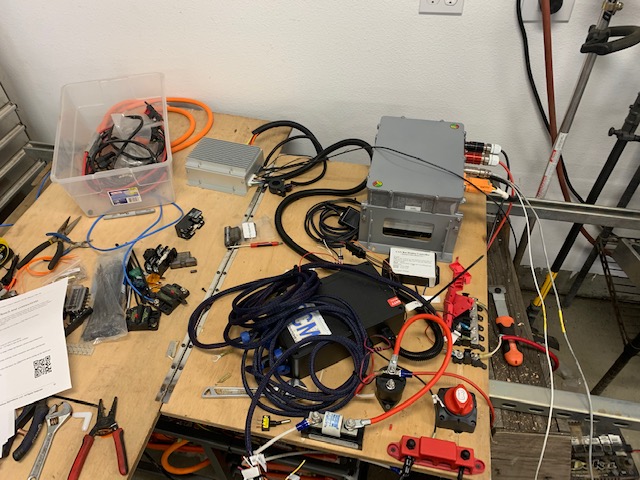 Frame and body are arriving in 10 to 14 days.
Axles are cleaned and the trusses are tacked, 4/3 link it is ready, I just need to pick it up.
So, if I can get the EV system bench tested in the next 14 days, I should be able to turn my full attention to the frame and axles and turn the frame into a roller.

Okay, the struggle gets real. Trying to get the software up and running on Canbus. The SCM was bad and would not power up. Okay, send it back. Make some adjustments to get the battery management system and charger up without the SCM. Turns out I had the DB-9 connector wired backwards, so fixed that and twisted my wires up. Finally got can bus up and the Orion software running. But, the profile I loaded into the BMS didn't stick, so I didn't realize I was running the default profile instead of the one that was expecting the charger and the display to be there. Adam at Hawkeye had to walk me through that this morning and finally we got all the battery cells to show up and the charger came to life and the display did as well and we were charging. So, that was an achievement.

But, after 5 minutes the charging stopped. I could not figure out why. Finally realized the breaker had blown. 20 amp 220v breaker and we were pulling a steady 35 to 40 amps through it. So, we change a parameter in the BMS, which is remarkably sophisticated, to keep charging below 25 amps for now. But the break won't reset until it cools down. 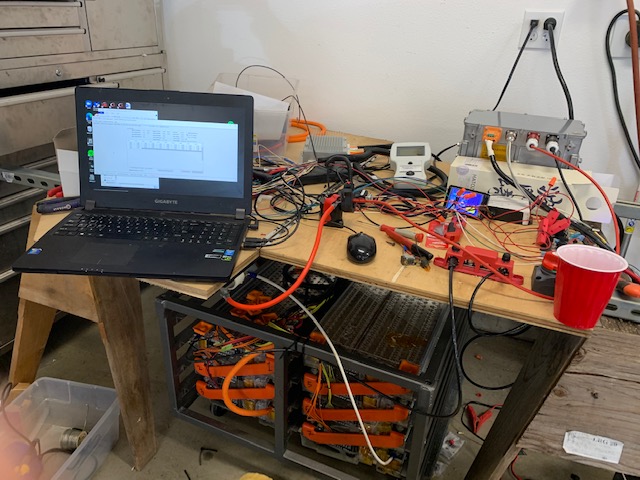 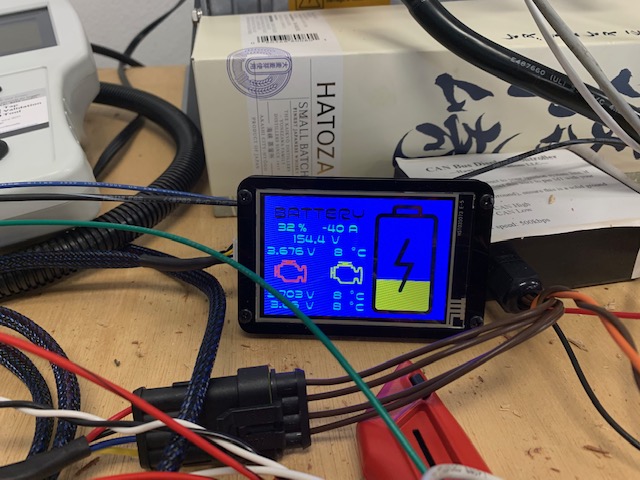 Once I get a charge to keep running enough to get me close to 4 volts. I'm going to move onto finishing the cooling system. Apparently, it's not so much cooling as keeping everything the same temperature. So, even though it's in the high 40's in my shop, I still need to have the coolant system running. So I have a small cooling reservoir coming, the pump is here, the BMS will control the pump, and I finish the plumbing and fill it up.

Once that is done, it's time to bench test he Hyper 9 motor. I'll need the SCM back for that and there a lot more wiring to do. So, that's going to be next week before I have everything I need.

Keep up with the technical updates. Loving what you're doing here.

So, I can say, not that I'm charging at 20 amps, that 20 amps blows. A 1/10th of a volt an hour. So, I looked through the boxes of stuff I have, found the female end of charging cable which will mount in the car, and looked for the male end, only to figure out I have to pay $650 for a 'charging station'. $650 for a box with a plug on it, that plugs into my welding outlet. But, it's got wi-fi.

I got a small buggy coolant reservoir and some of the coolant hose the EV guys use. They use the nicest stuff, the cable and hose is a lot nicer than the crap they sell at the auto parts store - it's spendy, but flexible and soft.

I've got the tesla water pump, tomorrow I'm going to plumb it all up - while I wait for the $650 charging station to arrive.

Also, it's time to think about how I'm mounting the motors.

I bought a 50a charger to be able to charge my *relatively* tiny 100ah LiFePO4 setup in a decent time frame, so I hear you!
You must log in or register to reply here.

FJ45 Documentation. I have a green one.

Tube or service bed for FJ45?